I think it’s safe to say that speakers make the biggest difference in sound in any system. I think it’s also safe to say that you’ll never find two sets of speakers that sound exactly alike, even if they look almost the same. As a result, speakers are oftentimes the easiest to cover -- with so many shapes and sizes and differences in technologies and sound, it’s always really easy to find something interesting.

At this year’s RMAF, Brent Butterworth and I chose to split up the speaker coverage. Below are the most interesting models I found, with all prices in USD.

This year marks Sonus Faber’s 35th anniversary. For this celebration, the company has already launched the Sonetto lineup of loudspeakers at Munich’s High End and has now followed that successful launch with a standalone speaker: the Electa Amator III. Loosely translated from Latin, electa amator means “selected lover.” The original Electa Amator was released in 1987, the Electa Amator II in 1997. 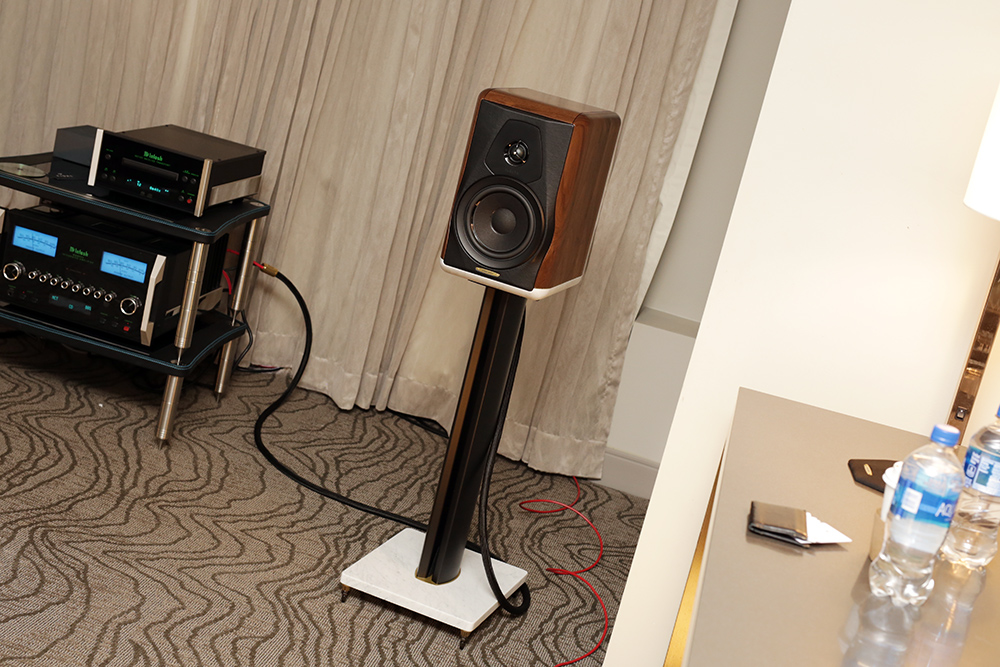 Priced at $10,000 per pair, including stands, the Electa Amator III is a two-way design with a 1.1" (28mm) Damped Apex Dome tweeter and a 7" (180mm) paper-based midrange-woofer, crossed over at 2.5kHz. According to industrial designer Livio Cucuzza, the design goal behind the Electa Amator III was to create “not a simple reinterpretation of an icon, but the respectful evolution of it.” As a result, many of the Sonus Faber design earmarks are there, such as . . . 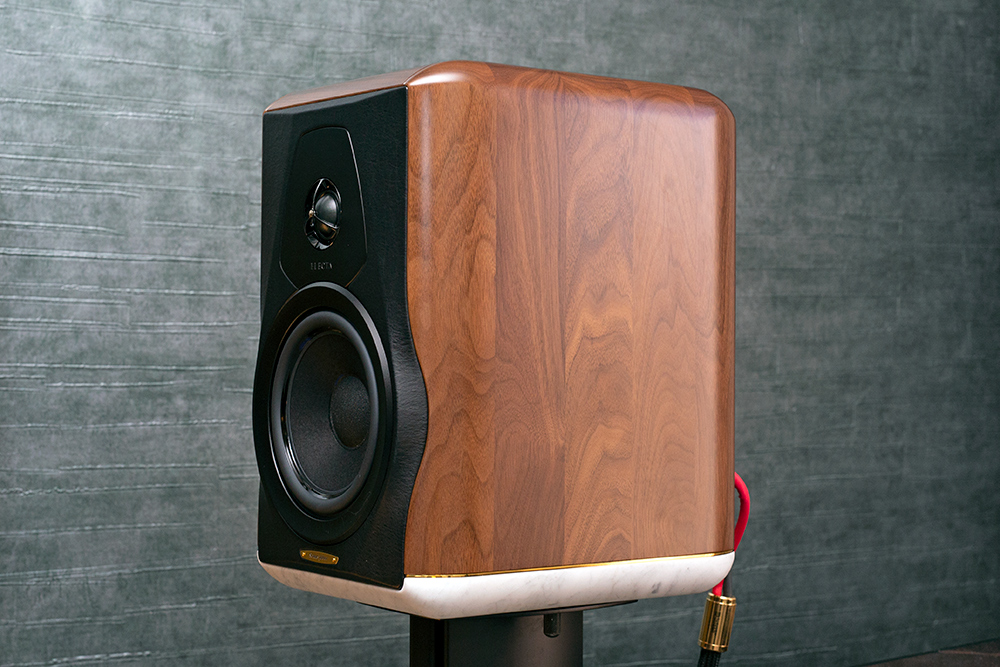 . . . leather on the front baffle and solid-wood walnut around the cabinet. But new to the company is the use of Carrara marble for the base of the stand and the base of the cabinet, which I suspect has a helpful acoustic benefit, but definitely has a positive aesthetic one. 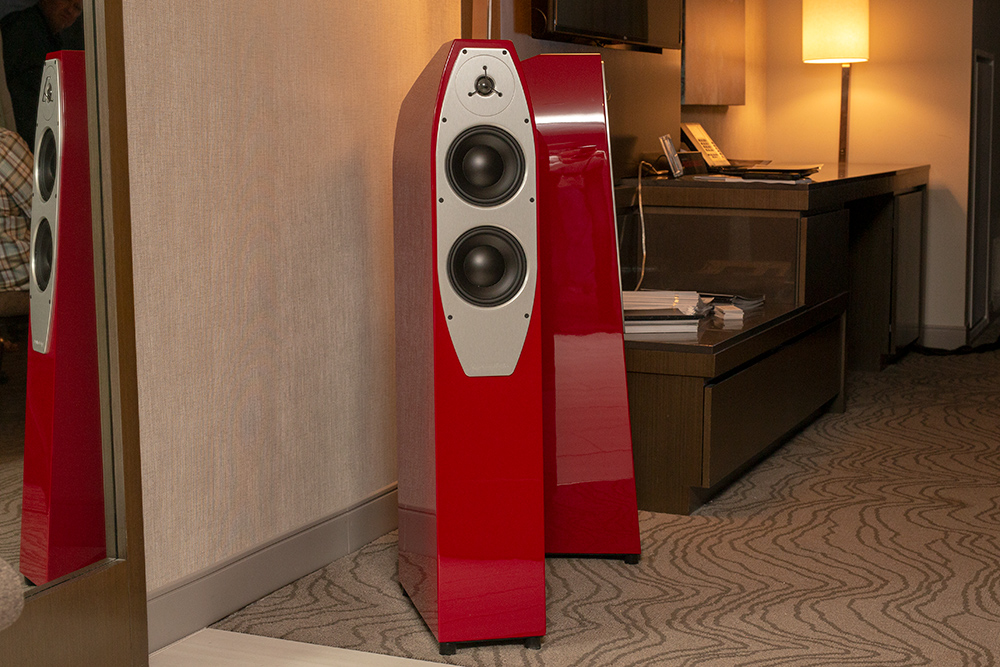 Slow and steady can definitely win the race. Founded in 1997, EgglestonWorks has steadily improved the sound and build quality of its speakers to the point that, today, we always keep a lookout for what they have that’s new. At RMAF 2018, it was the Emma Evo loudspeaker, displayed in a . . . 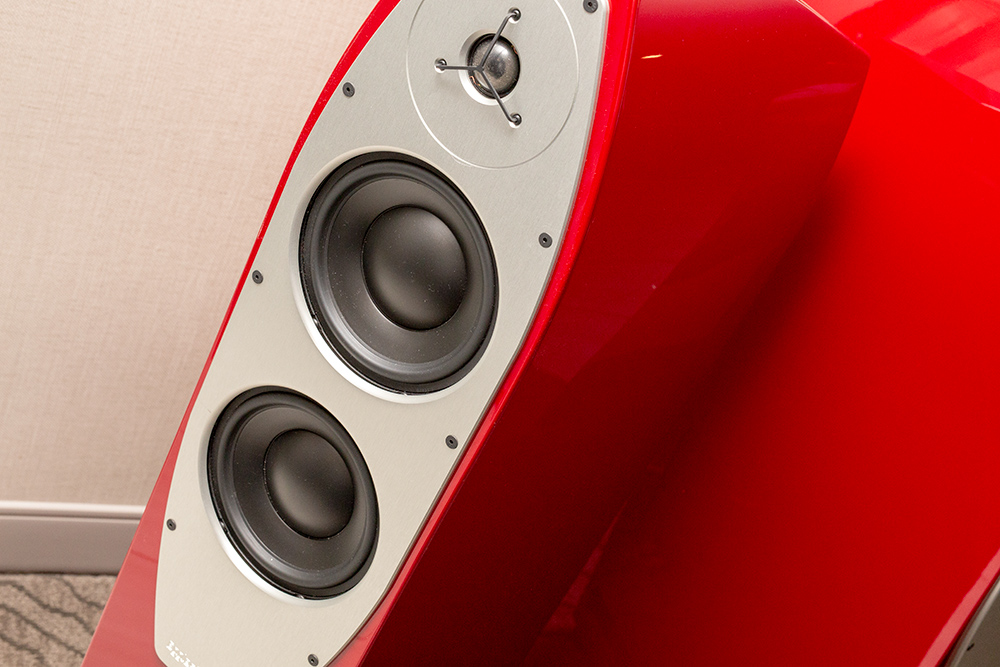 . . . fire-engine red, though president Jim Thompson told me that it’s available in any automotive-type color. For the price -- $5500 per pair -- the quality of the paint job looked exceptional. The Emma Evo has two 6.6" midrange-woofers and a 1" tweeter crossed over using a 2.5-way topology -- both midrange-woofers operated in the bass region, but only one rides up through the midband and crosses over to the tweeter. Like the company’s more expensive Andra Viginti loudspeaker, the Emma Evo extends its bass response with a transmission-line type of slotted porting system that exits through the bottom of the cabinet’s rear. 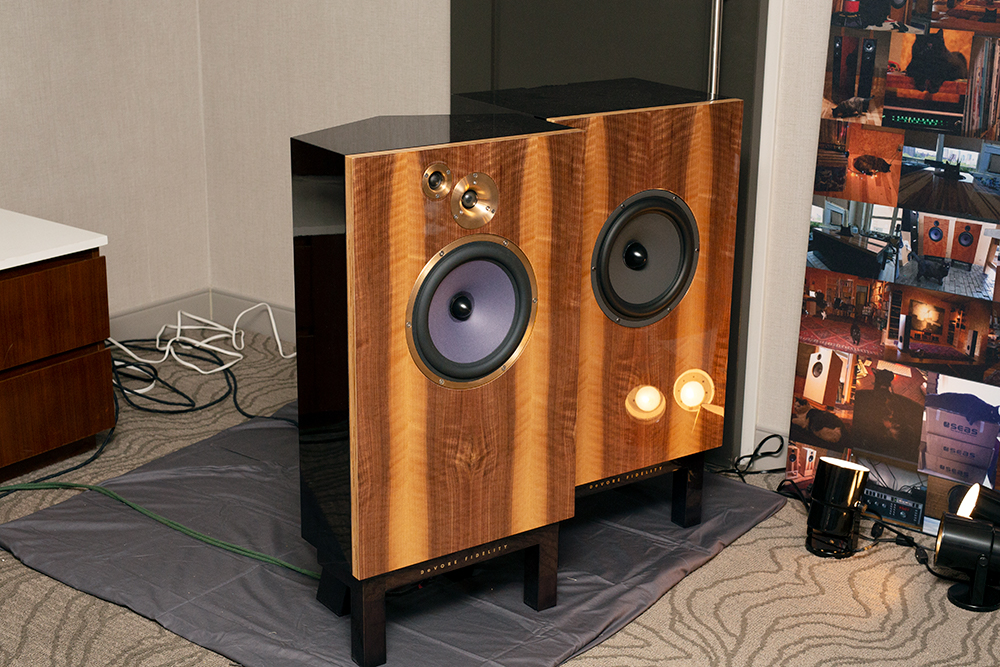 Brooklyn, New York-based DeVore Fidelity used RMAF 2018 to launch its new reference loudspeaker system -- the Orangutan Reference (OR). The OR has two enclosures per side. One of the enclosures is fully passive with a 0.75" silk-dome super-tweeter that has a machined-bronze horn and a rare-earth magnet; a 1" silk-dome tweeter, also with a machined-bronze horn and a rare-earth magnet, but also with underhung voice coil; and a 10" paper-cone woofer with a bronze chassis and phase plug, an AlNiCo magnet, copper Faraday rings around the gap, and a titanium former. The . . . 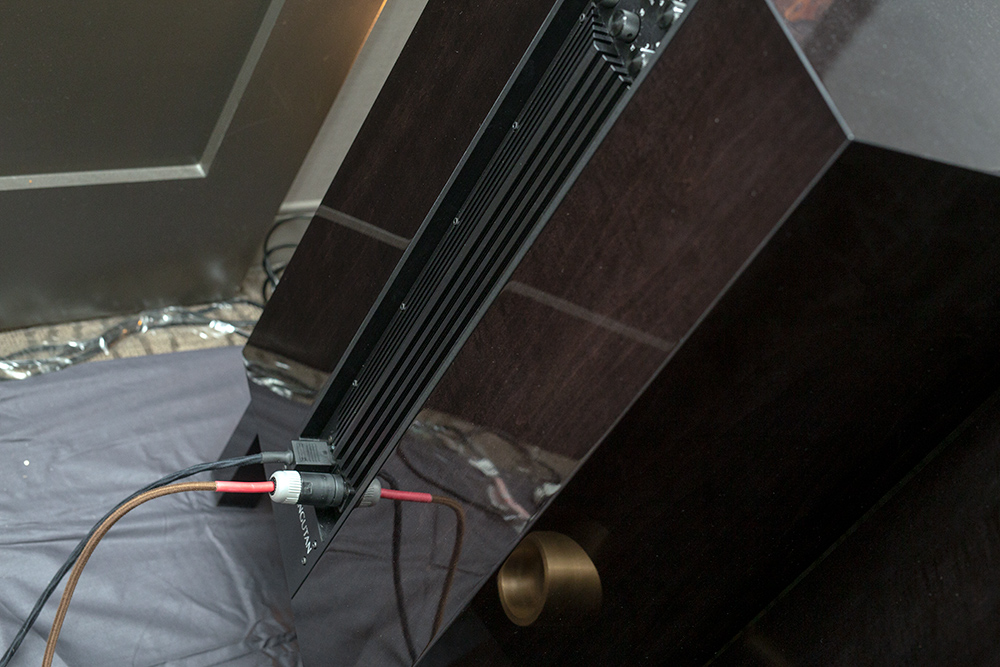 . . . other enclosure has another 10" woofer, as well as something new for a DeVore speaker: a power amplifier to drive that woofer. In this case it’s a 300W class-AB design with a linear power supply. The speaker’s frequency response is rated as 16Hz to 45kHz, its sensitivity is claimed to be 98dB for 1W at 1m, and its nominal impedance is said to be 12 ohms. The price for all these enclosures and parts isn’t for the faint of heart, though. Firm pricing hasn’t been established, but $80,000 for the system, if not more, is what’s rumored. 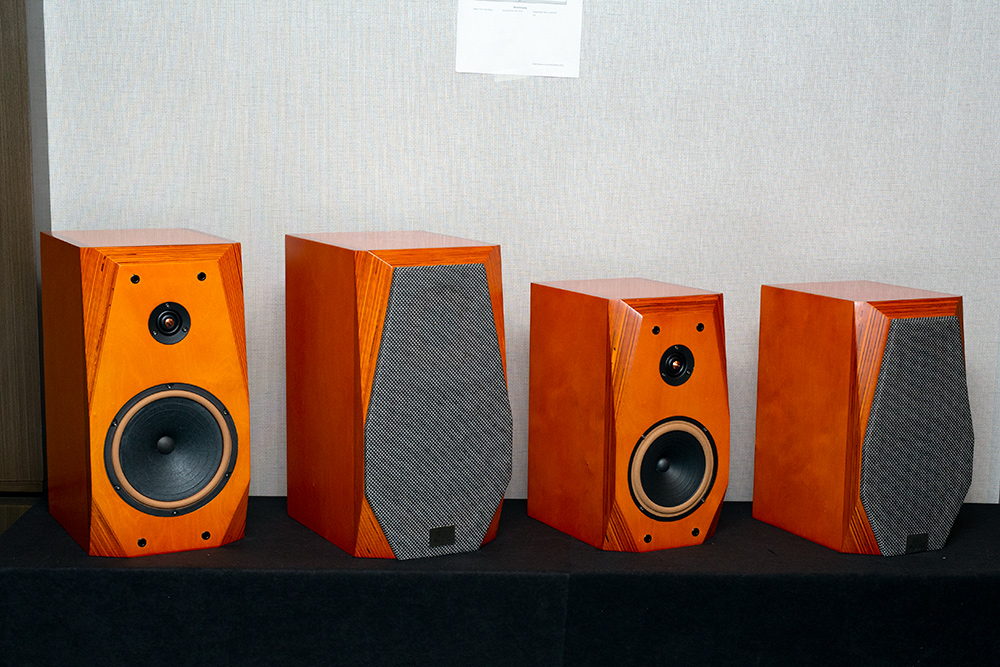 Gill Audio is a new company based in Savannah, Georgia, USA, though its products are actually manufactured in Taiwan. Shown above are the Cassini 8 (left) and 7 monitors, priced at $3000 and $2500 per pair, respectively. Unique to both Gill Audio monitors are paper-based “full range” cone drivers that extend up to 16kHz (in both models), which are then each crossed over to a combination silk-diaphragm and titanium ring-radiator-type tweeter that extends up to 25kHz. Fleshing out the Cassini line is . . . 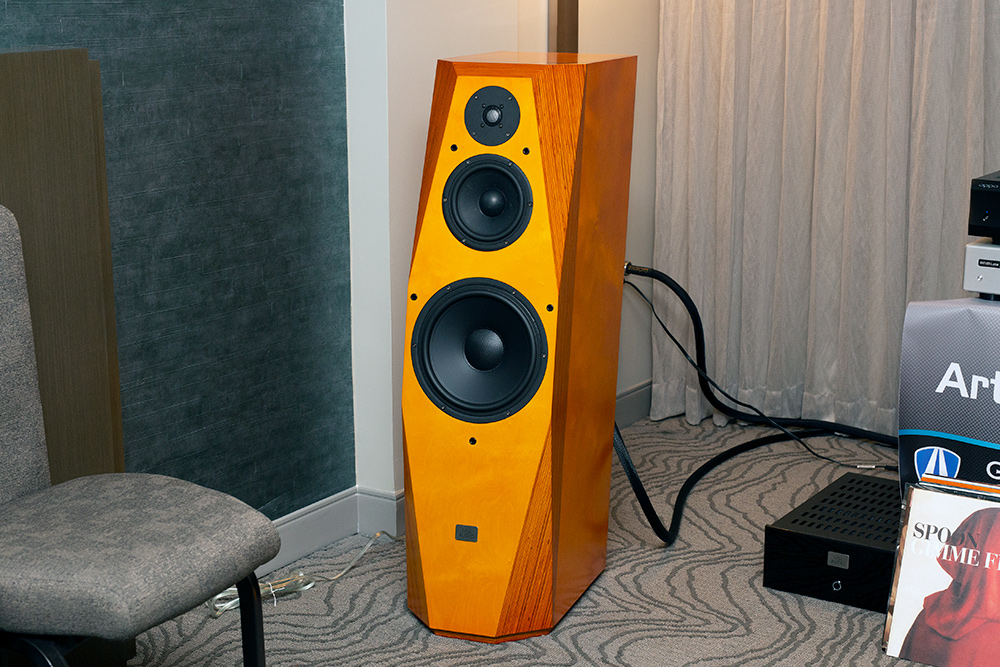 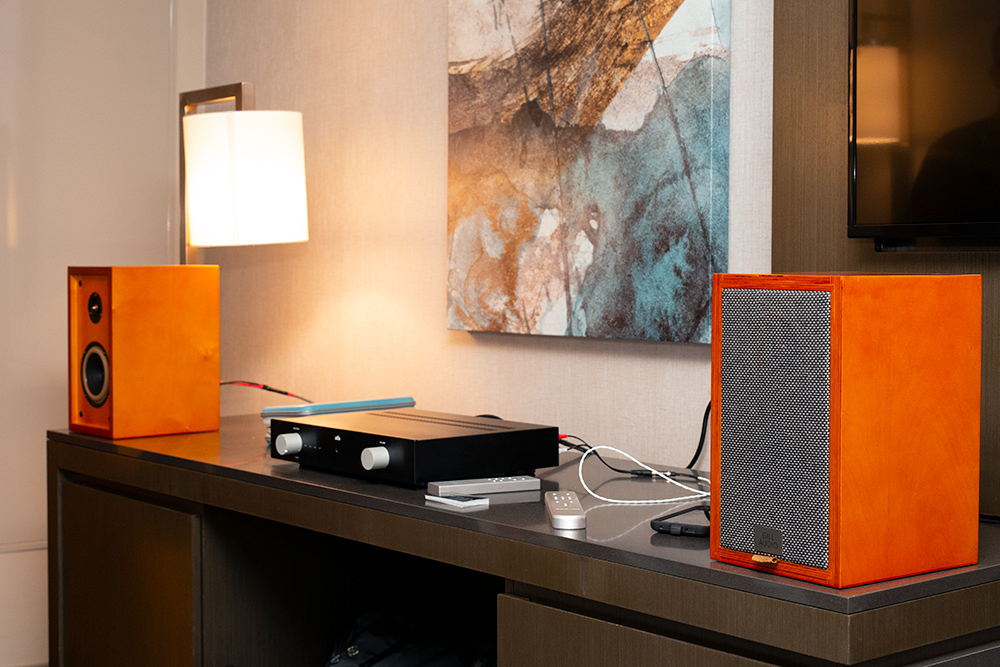 . . . retro-looking Proxima 5 monitor, priced at $1250 per pair. Like the Cassini monitors, it has a “full range” cone driver that extends to 16kHz before crossing over to the tweeter. Not shown but available are Proxima 7 and 8 models, which are larger than the 5 and respectively priced at $1500 and $1750 per pair. 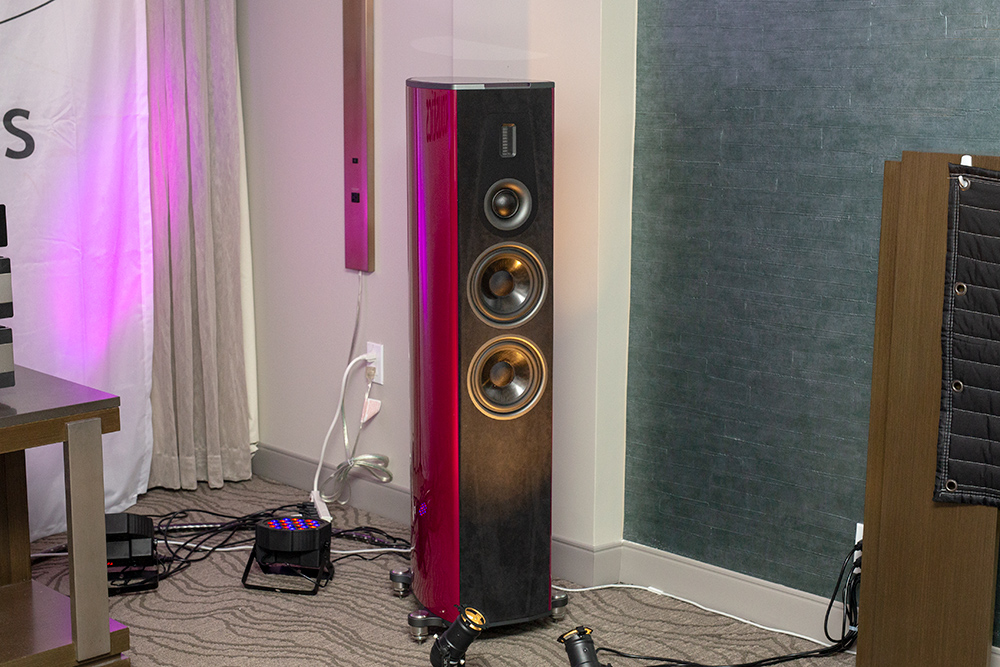 From the UK’s Falcon Acoustics comes the Reference GC6500R. Strange name? GC stands for “graphene cone,” 6500 for the diameter of the bass units (6.5" actually, with two zeroes added to the end), and R for ribbon. The GC6500R is a three-way design with the woofers having the graphene, which is mixed into the resin for the carbon-fiber-based cone. The midrange . . . 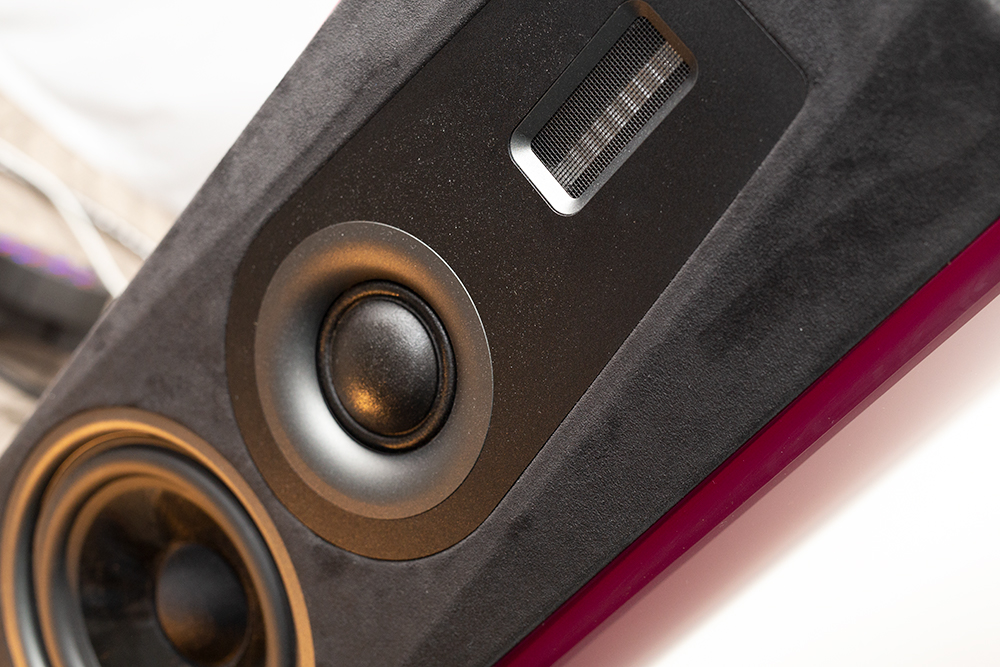