The 2019 Rocky Mountain Audio Fest took place from September 5 to 8 this year in its new home at the colossal Gaylord Rockies Resort & Convention Center, near Denver International Airport. For the last several years, there has been a CanJam headphone show held as part of RMAF, but CanJam pulled out this year. Still, the HeadSpace section of RMAF held a large variety of headphone companies -- not as many as the CanJam/RMAF did, but still quite respectable, and I found plenty to write about in the large, quiet ballroom that hosted HeadSpace.

Here is the first batch of new headphones and earphones I found at RMAF, with all prices listed in USD. 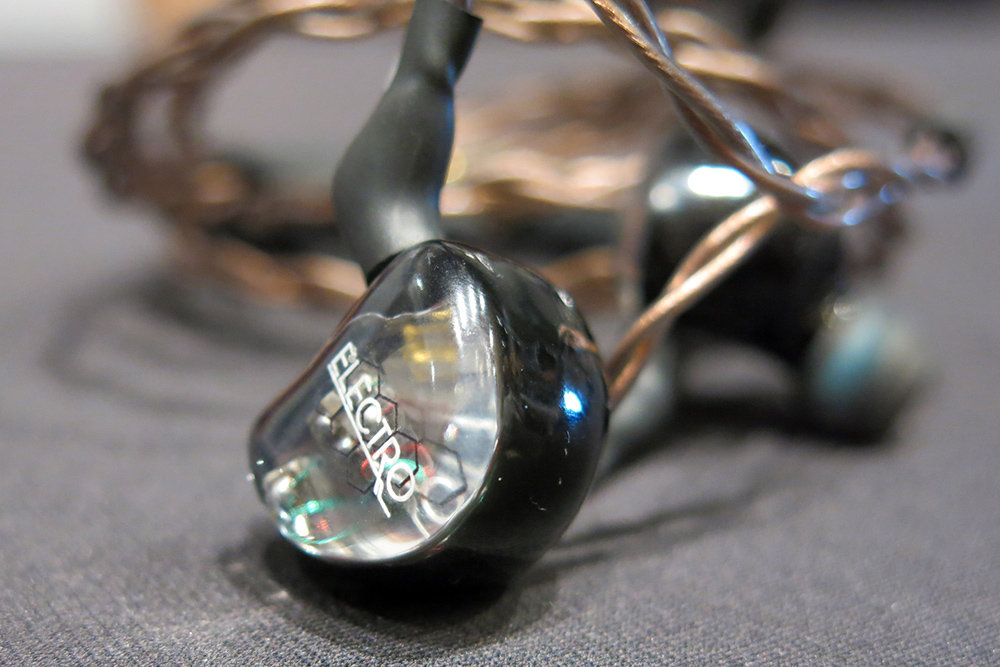 Alclair is an earphone brand better known in professional audio circles than among audiophiles, but the company’s pushing more toward the enthusiast market these days. The Electro earphones ($1499) combine four balanced armatures plus two electrostatic supertweeters. Each earpiece also incorporates a small transformer said to be about the size of four balanced armatures. The company reps weren’t quite able to explain how the electrostatic drivers work without a separate bias voltage applied to the electrostatic diaphragm that produces the sound. I would guess that either they use a permanently charged diaphragm (sort of like an electret condenser microphone does), or they pull some of the high-voltage musical signal off the transformer’s output, then convert it to DC to charge the panel. Either way, I liked the end result, which sounded very detailed and generally neutral but for a mild lower treble emphasis. 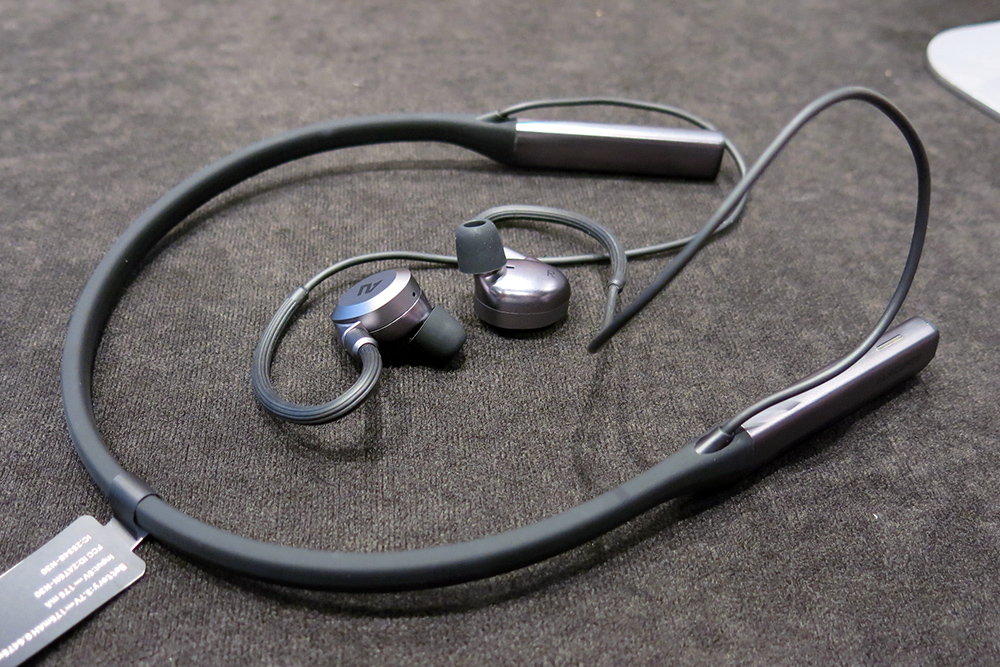 Ausounds, which launched on August 27, is that rare new headphone company that’s worthy of attention from audio enthusiasts, and I’m glad I was able to meet them at RMAF. The company’s AU-Flex ANC neckband-style Bluetooth earphones ($199) look mass-market, but each earpiece combines a dynamic driver and a tiny planar-magnetic driver, basically a miniaturized version of the drivers popularized in big audiophile headphones by Audeze and HiFiMan. Surprisingly, the AU-Flex ANCs include Sony’s LDAC technology, which is the highest-quality Bluetooth codec now available, and they have active noise canceling. They’re also IPX5-rated, so they should be sweat- and rainproof. There’s also a true wireless model, the AU-Stream ANC ($149), with a big 13mm titanium driver. Expect planar-magnetic passive in- and over-ear models soon. 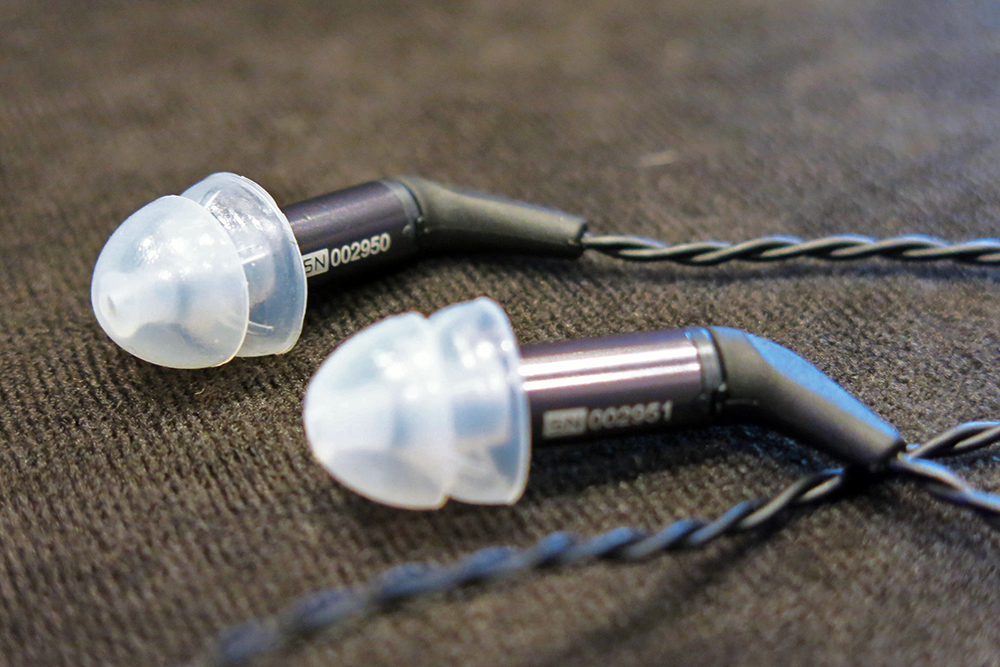 Until RMAF 2019, I’d never quite gotten along with Etymotic earphones, which have historically been voiced for a bright sound. But when I heard the ER4XR earphones ($349.99) at RMAF with the company’s new double-flange tips, I was finally won over. They’re the first Etymotic silicone tips that fit me well, so perhaps I was finally getting the desired performance. The sound was neutral, natural, and full, just the way I like it. Four sizes of the new tips will be included, along with the existing triple-flange and foam tips, at no price increase. 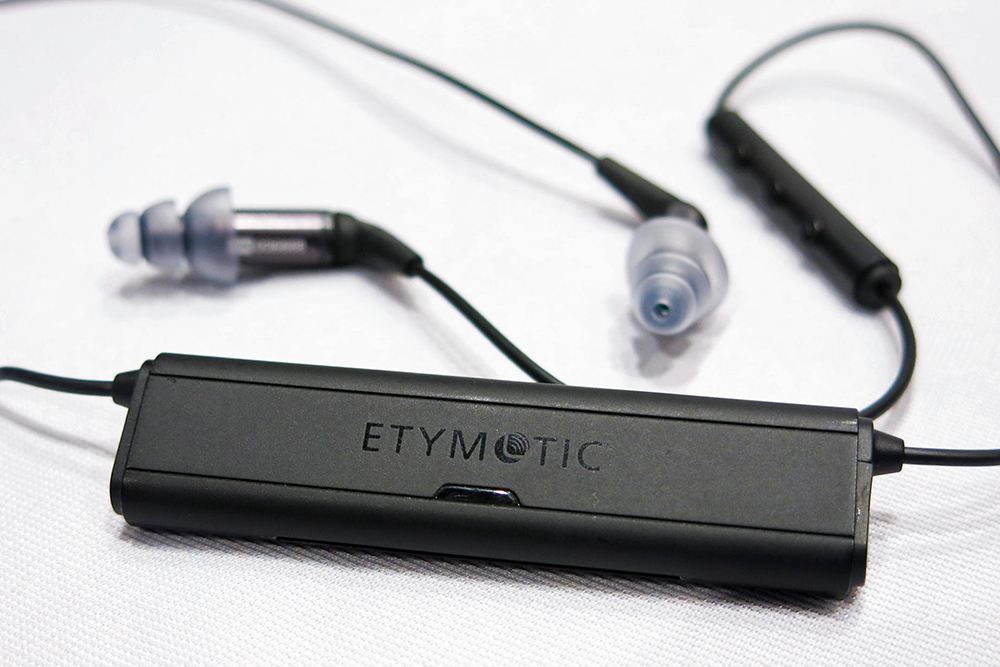 Etymotic also used RMAF to launch its first Bluetooth cable, the Etymotion, which can be used with any Etymotic ER-series earphones. It has a Bluetooth receiver, a DAC, and an amp built in. Price hasn’t been set yet, but the company is shooting for $159. And it will probably offer the Etymotion in a package deal including its earphones with a few bucks shaved off the price. 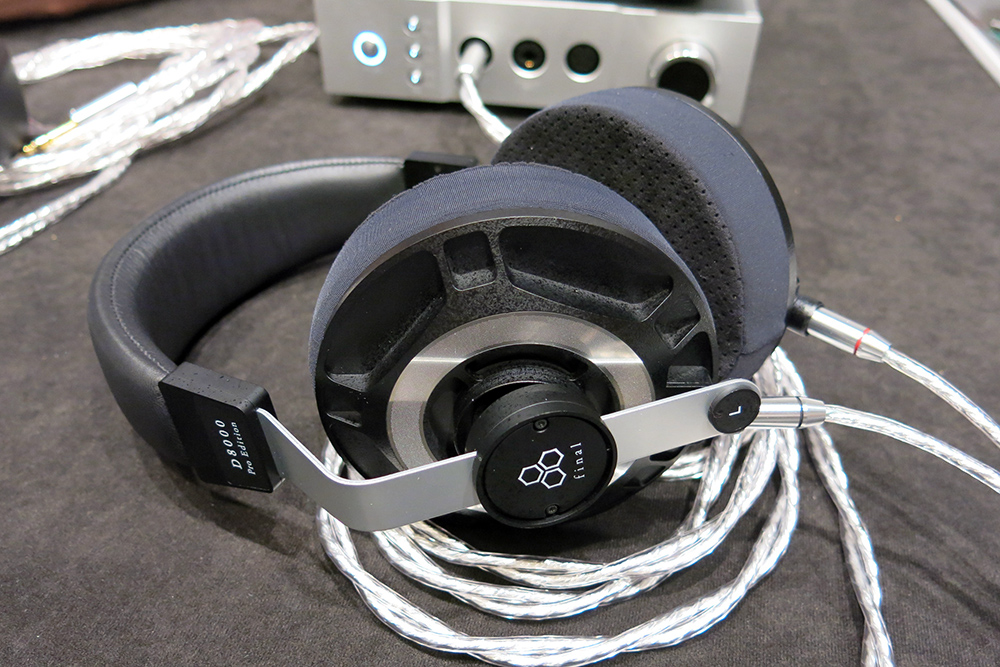 The Final D8000 Pro headphones are a revoiced version of the company’s original D8000s. According to Final’s Michael Brown, many customers in Europe and Asia wanted more bass than the D8000s could muster, so Final’s engineers tweaked the earcups and earpads for a fuller sound and a subtle extra kick around 3 to 4kHz. “They have more drive because of the midbass, and a little more life with the little bit of extra treble,” Brown said. The Final D8000 Pros are expected to retail for $4300 when they become available. 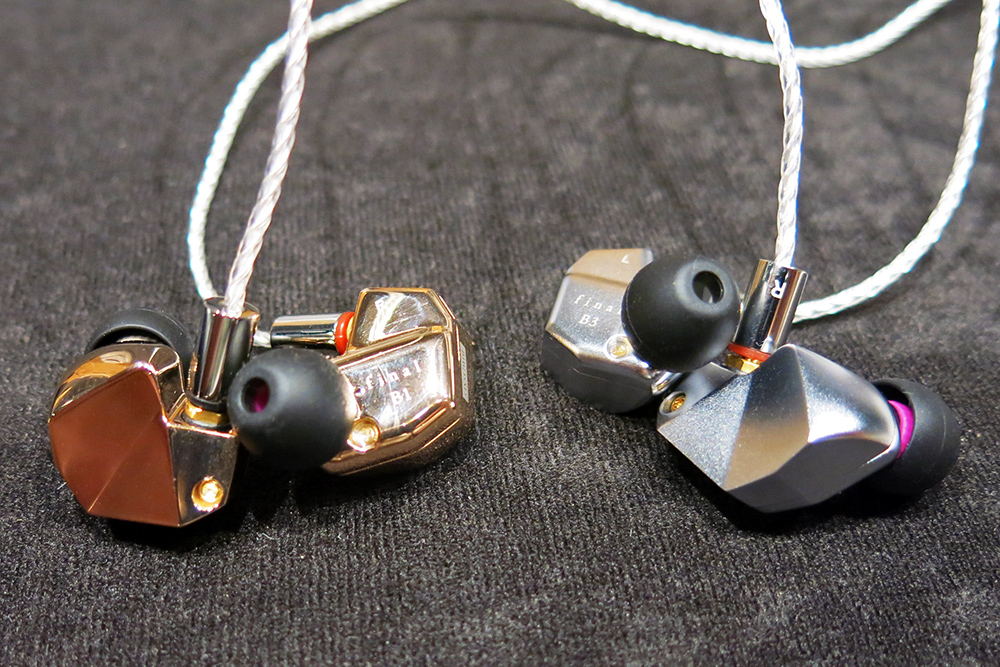 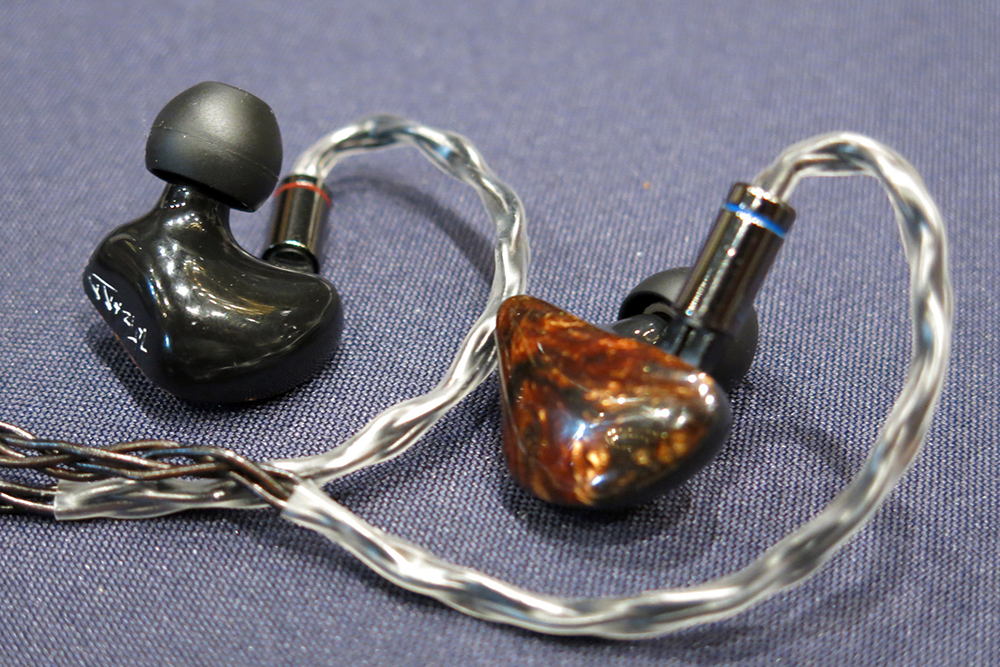 Noble Audio’s M3 earphones ($600) pair a 10mm dynamic driver with a type of driver I’ve never heard of: an “active magnetic balanced driver.” It seems to be sort of like a ribbon driver in that its signal is fed to a filament suspended between two magnets, except in this case the driver is round. Perhaps just as interesting -- and I can’t believe I’m saying this -- was the new cable included with the M3s. The eight-conductor cable is the most wonderfully soft and flexible headphone cable I’ve ever found, which means not only that it will drape comfortably over your neck and shoulders, but that it’ll also be free of microphonics -- that annoying rumble you hear when your earphone cables scrape across your clothes. Right now it’s available in a 3.5mm unbalanced version, but 2.5mm and 4.4mm balanced versions are expected in two weeks, and the cable will likely be sold separately for $199 as an upgrade for other earphones. 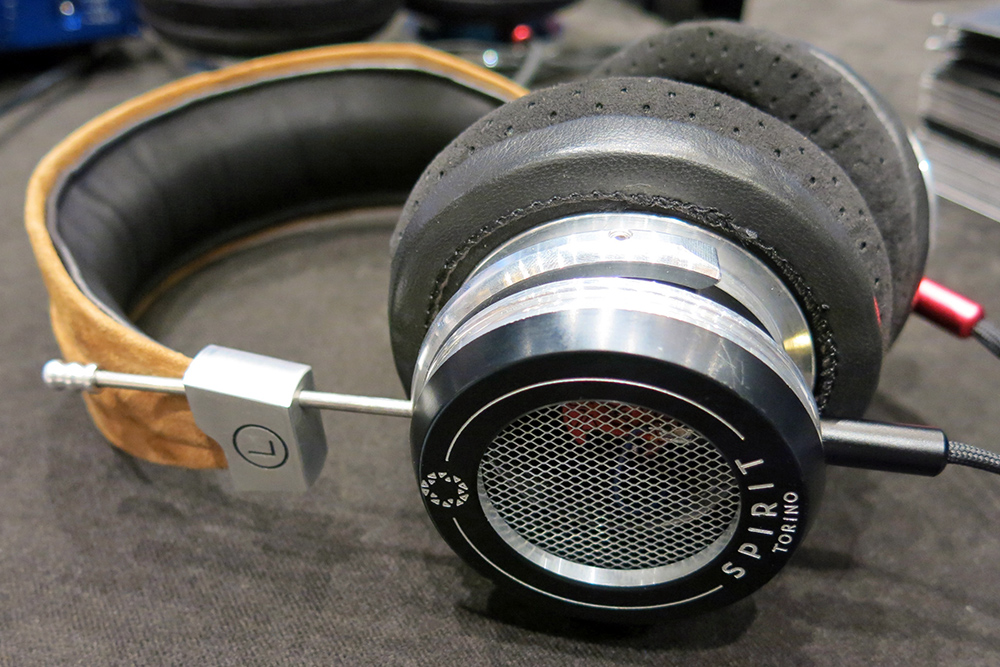 When I saw the Spirit Torino Superleggera headphones ($1999) at RMAF last year, they struck me as just a more stylish version of Grado headphones. But since then, they’ve been substantially upgraded in many ways. First and foremost, they now have earpads designed by Dekoni Audio rather than the scratchy, Grado-style open-cell foam pads of the original. The new pads have that super-open feel and sound of Grado pads, but they’re vastly more comfortable, thanks to Alcantara, a suede-like microfiber material that covers the pads. They’ve also switched to neodymium magnets, which provide a more powerful magnetic field and are said to improve dynamics and reduce distortion. Like all of the company’s headphones, the Superleggeras are handmade in Turin, Italy.