T.H.E. Show Newport 2016, held at the Hotel Irvine in Irvine, California, featured a few new speakers plus several being demoed for the first time in North America. The offerings ranged from ultra-retro to ultra-modern, at prices from a few hundred dollars to more than a hundred thousand dollars. Here are the ones I thought were most interesting. Speakers are presented in alphabetical order by brand, with all prices in USD. 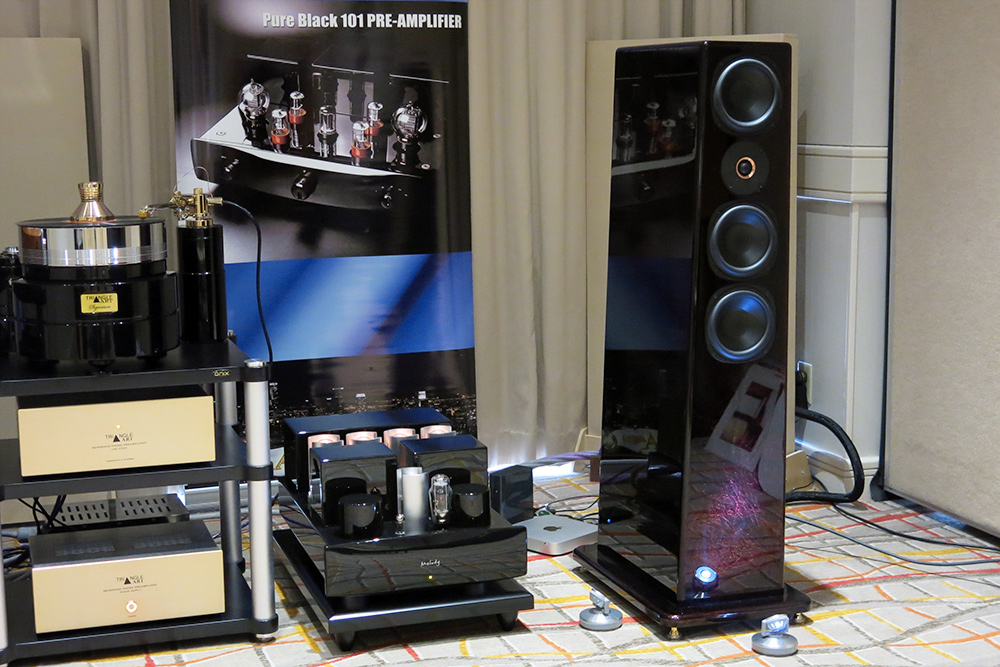 Angel City Audio’s $7999-and-up-per-pair Seraphim was one of my favorite speakers at the 2015 Newport show. At the 2016 Newport, the company -- now calling itself ACA -- showed the new Seraphim Prime, a $22,000-per-pair flagship model that looks a lot like the Seraphim but has an upgraded tweeter, a new crossover with upgraded components, and a higher-grade finish. 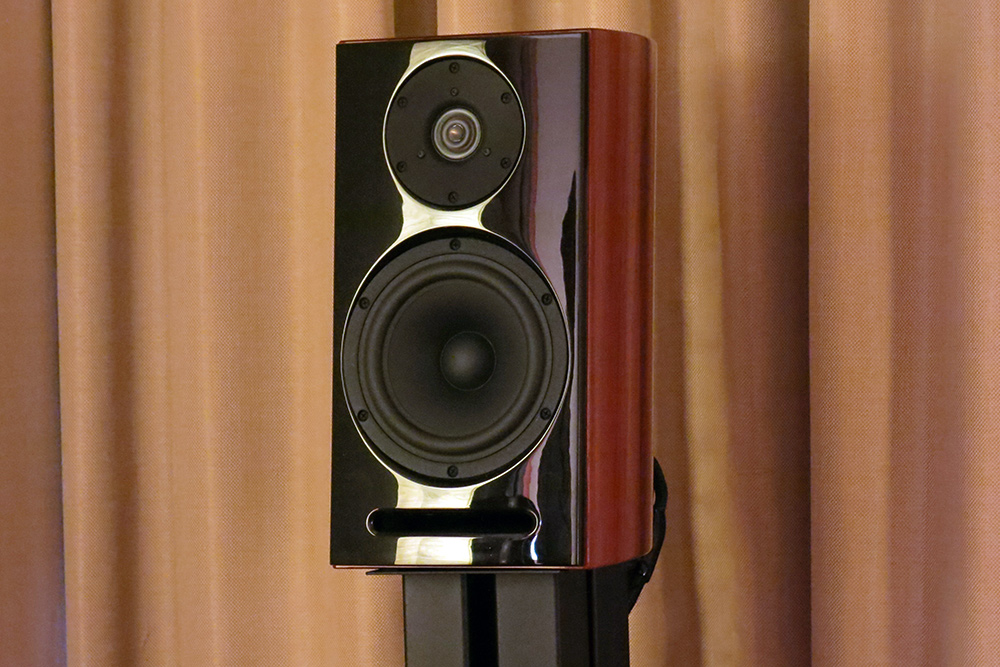 The 2016 Newport show marked the first public demo of Aerial Acoustics’ new 5T bookshelf speaker. The tweeter and midrange-woofer in the 5T are much the same as the ones in the 7T tower speaker. With a 6.7” long-throw woofer, the 5T has a rated bass response of 38Hz, which is impressive for such a small speaker. A ring-radiator dome tweeter provides the highs. The price is $3850 per pair, which in the context of a high-end audio show puts the 5T in the “affordable” class. 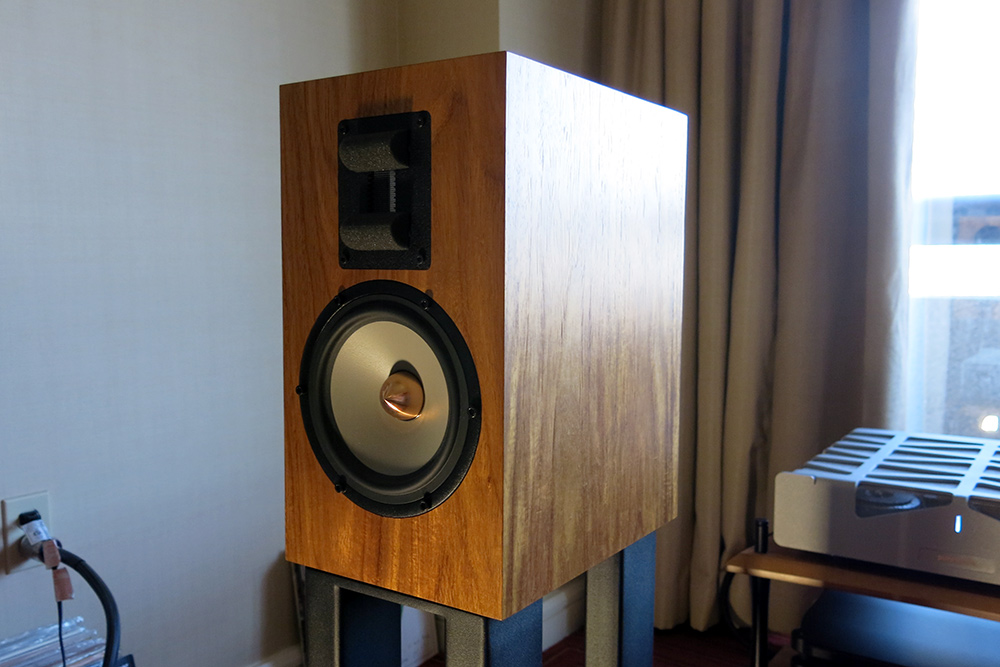 The similarly sized but much less affordable Brigadiers Audio Compact BA2 bookshelf speaker justifies its steep $12,000-per-pair price with much more robust construction and a really cool tweeter. The enclosure is a “box in a box.” The inner box, to which the drivers are mounted, is made from 25mm birch plywood. A layer of energy-absorbing glue bonds this box to the outer box, which is made from 9mm MDF covered in a 3mm veneer. The Raal ribbon tweeter has magnetically attached foam baffles on top and bottom that can be moved up and down to tune the tweeter’s vertical dispersion. A 6.5” magnesium-cone SEAS woofer provides the bass. For extra cost, the company will send you photos of veneer samples, and you can choose the exact woodgrains that will be applied to the speakers. 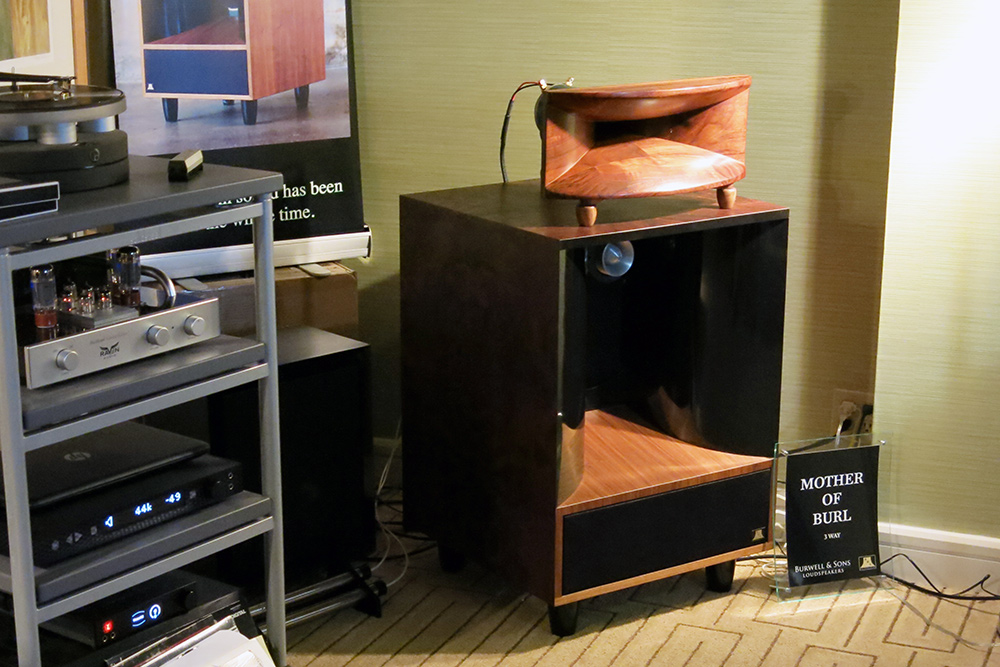 I’ve encountered companies that refurbish vintage speakers, but never one that uses refurbished vintage drivers to build new speakers. The $80,000-per-pair Burwell & Sons Homage shown here employs Altec 802D compression drivers fitted with machined wooden horns and augmented with JBL “bullet” tweeters. When I asked company founder Gordon Burwell what woofers the speaker uses, he told me, “The woofers are so old they don’t say anything on the back, but they came from some speakers that were installed in the Fairmont Hotel in San Francisco.” The company designs and builds its own cabinets and crossovers, and offers a pair of 12” sealed subs to augment the bass response. 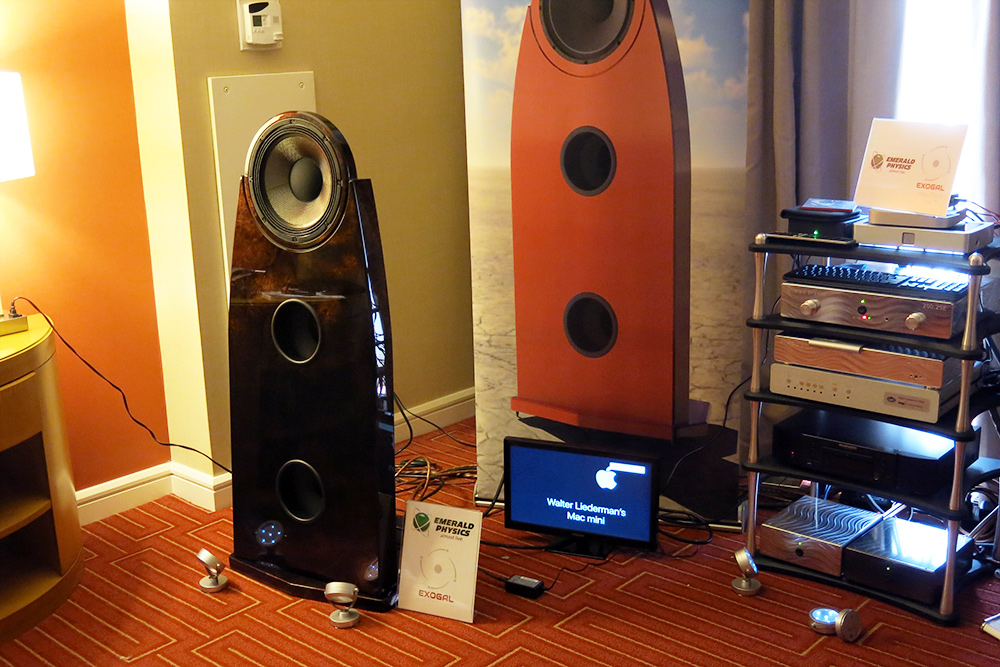 The $9995-per-pair EP-2.8 is Emerald Physics’ new flagship model. Like the company’s other models, it’s an extremely unusual dipolar, open-back design. The two holes in the front are apertures for a pair of 15” woofers. What appears to be a dust cap on the 12”, top-mounted midrange-woofer is actually a grille for the coaxially mounted compression tweeter. The main difference between the EP-2.8 and the EP-2.7 it replaces is the use of carbon-fiber cones on the woofers, a difference that the company says increases sensitivity by 3dB. A digital crossover/EQ processor is optional. 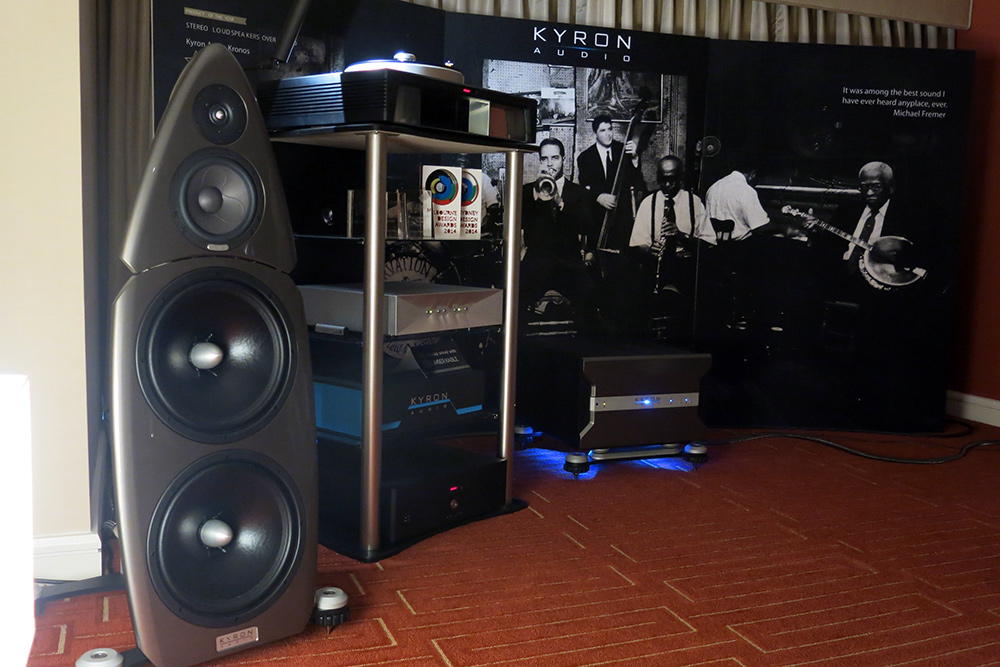 Although I didn’t get to hear every room, my vote for best sound at the Newport show goes to the Australian company Kyron Audio, which showed its $115,000 Kronos system. Kronos includes two open-back speakers, each with two 12” woofers, a 7” midrange, and 1” tweeters on front and back. The colossal component between the speakers provides six 1200W channels of amplification, allowing the speakers to be triamped and all crossovers and equalization to be done in the digital domain. The processor-amp, which is included in the price, has digital and analog inputs. I reflexively roll my eyes when I see exotic speaker designs like this -- I think plain old box speakers usually work best -- but a mere 10 seconds of listening to the Kronos system disabused me of my bias. The soundstage the system threw was colossal, creating a realistic simulacrum of a small performance hall on a Diana Krall recording, while keeping Krall’s voice tightly centered and capturing all the subtle mouth and chest resonances that make live singers such a joy to hear. 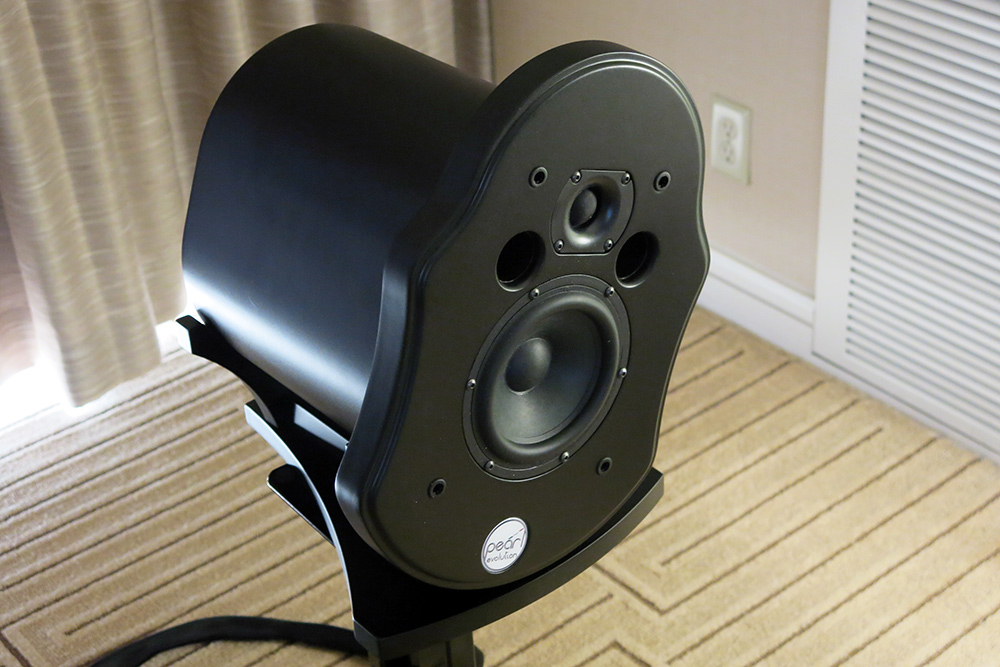 The $3000-per-pair Micro Ballerina from Pearl Evolution was easily the cutest speaker at Newport, and also one of the most creative designs. The speaker’s rounded bottom sits in a cradle, which sits on a speaker stand. The cradle allows the Micro Ballerina to tilt about 10 degrees in either direction. Tilt the speakers toward each other and you get a more focused center image. Tilt them away from each other and you get a bigger soundstage. It really works!