It’s always fun at audio shows to watch how the choice of source devices evolves. At T.H.E. Show Newport 2016, the source devices of choice were computers, record players, and half-inch analog tape. I’m sure there was a CD player somewhere, but I didn’t notice it. Here are the most interesting developments in source devices I found at the show, with the products arranged in alphabetical order by brand and all prices in USD. 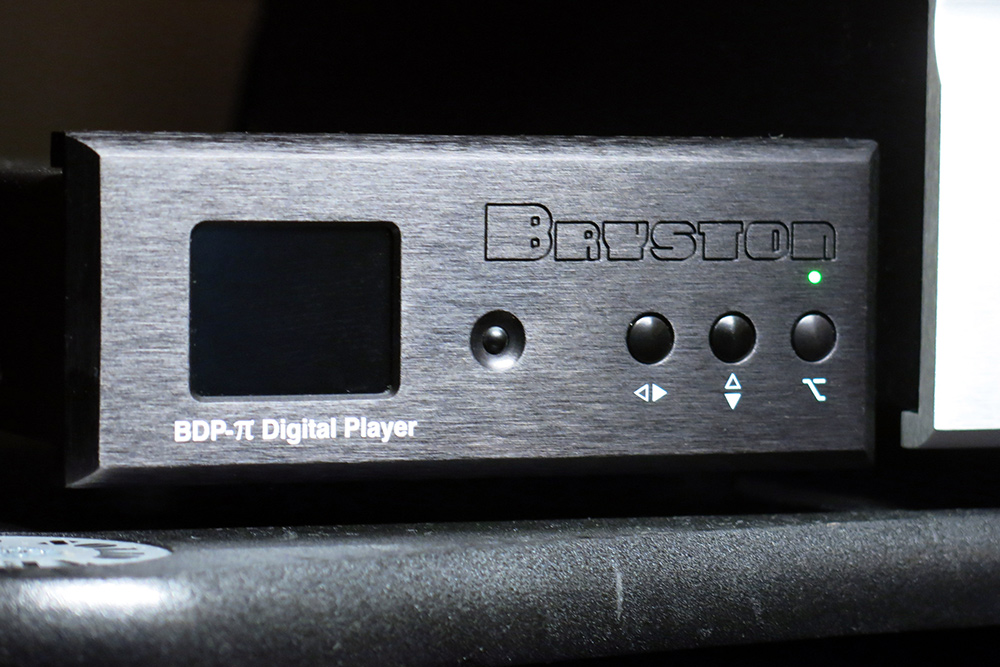 Without looking at the logo, I bet exactly zero audiophiles would guess the BDP-π is a Bryston component, because it’s sized more like one of those inexpensive little phono preamps. The BDP-π is a digital music streamer that Bryston says outperforms the much larger BDP-1. It can pull files from USB drives and sticks or networked hard drives and computers. Because it has a built-in Web server, you can browse files through any device that’ll run a browser, including smartphones, tablets, and computers. The back panel has coax and optical outputs said to handle PCM in resolutions up to 24/192 and an HDMI output with capability of 24/48 now, and expected 24/192 capability with a soon-to-come firmware upgrade. DSD capability is expected, too. Price is projected at $1200. 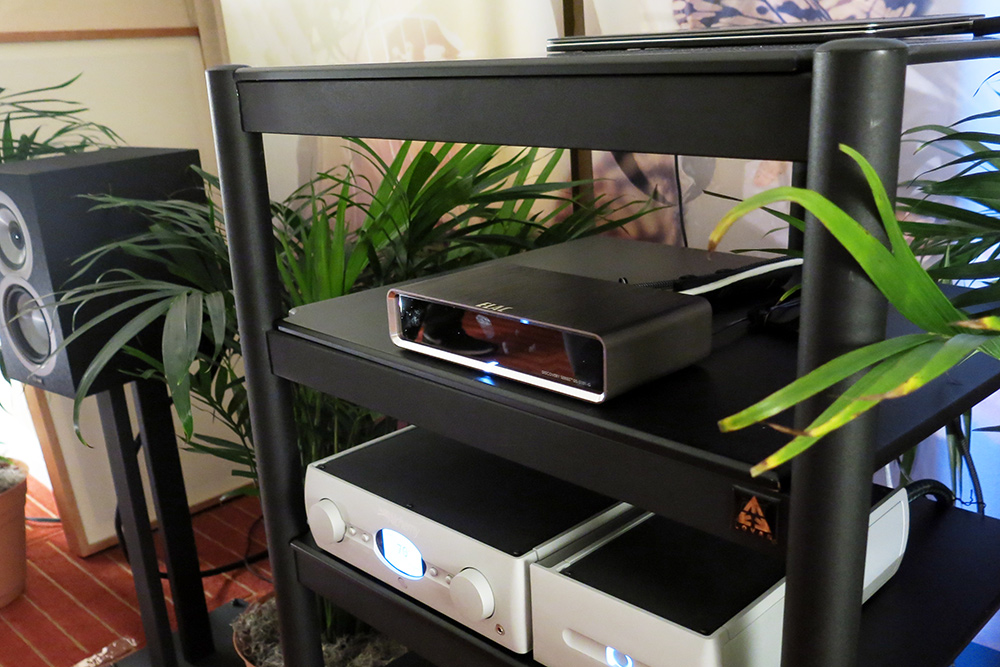 ELAC showed a prototype of its Discovery music server back at the 2015 Rocky Mountain Audio Fest, and the final version is now set to ship. The server works using the Roon music search and organization service, and the Roon subscription (normally $495 lifetime) is embedded in the hardware, so whoever owns the server can use Roon at no charge. Unlike the Roon-ready products I’ve seen, the Discovery music server is a multiroom product, able to output synchronized signals to as many as three rooms on its own, and more rooms if you connect AirPlay devices and more Roon-ready products. The final price is $1099, a bit higher than the $999 price announced at RMAF. 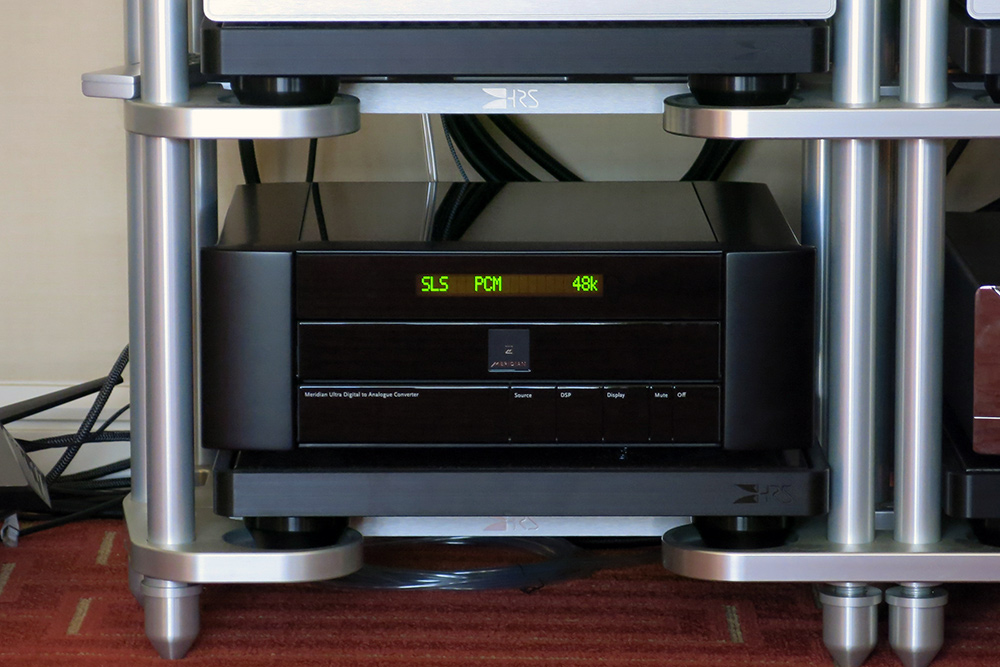 The $23,000 Meridian Ultra DAC probably got the most buzz of any new DAC at Newport, largely because it’s $23,000 and a Meridian. It employs an all-new DAC core based in part on the “hierarchical converter technology” developed for MQA digital audio compression/filtering technology; this technology employs multiple DACs in a special configuration running at the extremely high speed of 32 to 34MHz. According to Meridian America’s Ken Forsythe, it has “universal connectivity,” including USB, BNC, and AES/EBU digital inputs, plus an ID4 Ethernet input; the inputs can accept resolutions up to 24/384 PCM and DSD at double-rate (DSD128). It’s the first Meridian DAC with user-selectable upsampling filters, which are designed to compensate for the flaws in ADCs of certain eras. DSD signals get a special multibit conversion that allows them to be dithered, so sounds beneath the level of the least significant bit can be heard. 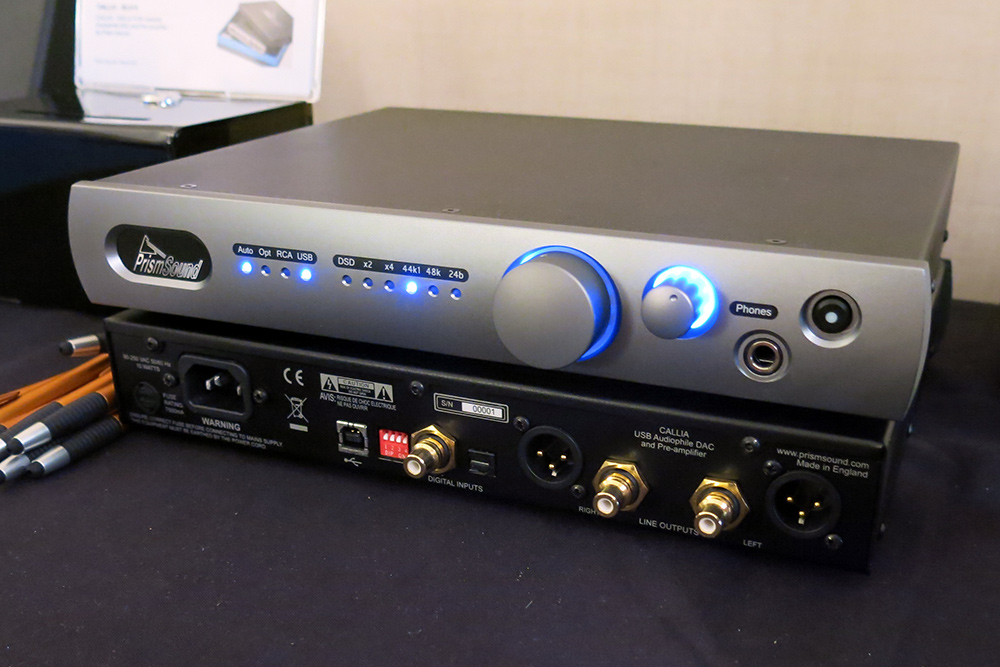 When it begins shipping next week, PrismSound’s $2499 Callia DAC will be one of the more capable DACs available. It can play PCM files up to 24/384 resolution, and DSD files up to quad-rate (DSD256). It has optical, coaxial, and USB inputs, and also has a headphone jack with separately adjustable level. Switches on the back adjust DSD headroom, headphone-amp gain, fixed or variable-level output, and whether or not the line outputs mute when you plug in headphones. 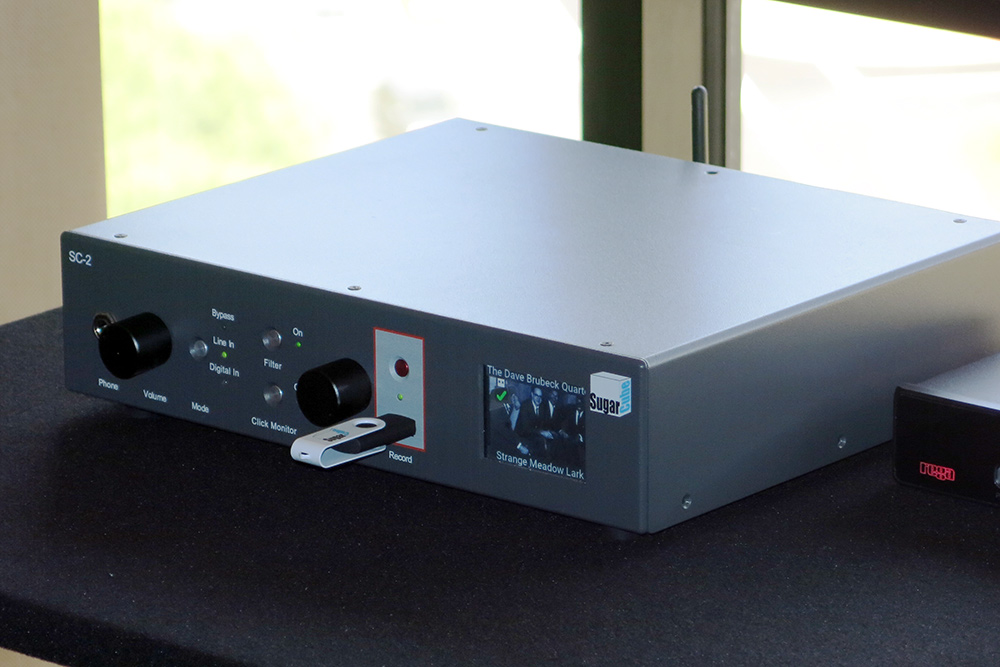 The SweetVinyl SugarCube is a phono signal-processing box that, depending on which model you choose, combines click/pop filtering, an analog-to-digital converter with USB output, and a high-end phono stage. The click/pop filtering was impressive -- it cleaned up the sound of a beat-up copy of Dave Brubeck’s Time Out without noticeably affecting the tonal balance. The USB output version includes metadata retrieval for audio files dubbed from vinyl; I’ve seen that in various pieces of software, but never found one that worked well, so time will tell if the SugarCube solves this problem. Price is $1000 for the click/pop filter only, $2000 for the version with USB output, and $3500 for the version with the built-in phono stage. 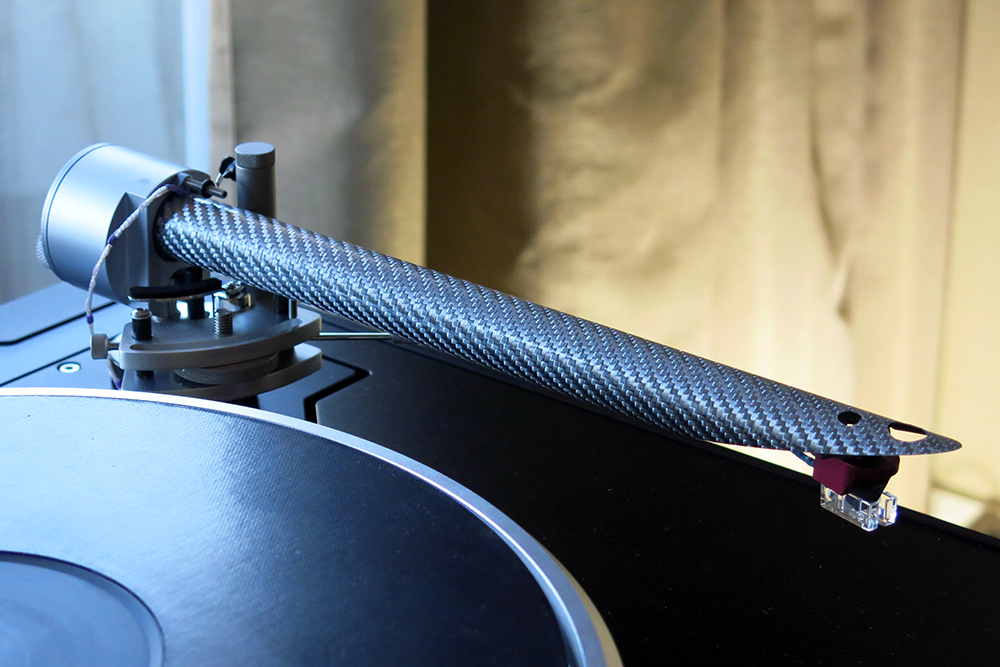 It’s weird to think of a tonearm costing more than $1000 as a fantastic bargain, but The Wand sure looks like one. The tonearms, which were being demonstrated on a $40,000 Döhmann turntable, start at $1050 for a 9” model. By using large-diameter tubes made from thin carbon fiber, The Wand is said to shift all resonances to frequencies where they can be damped by the fibrous structure of the carbon fiber. The model shown here is the Master Series, made from silver carbon fiber and equipped with an on-the-fly vertical tracking force (VTF) adjustment, a laser-sintered titanium headshell, and a silicon-oil damping trough. Price is expected to be $2000 to $2500.