Each year at the Tokyo International Audio Show (TIAS), two of Japan’s best-known electronics brands exhibit in rooms that are side by side -- Luxman and Accuphase. Sometimes, the two companies even release similar products at the same time (though, as you’ll see below, their new products this year weren’t similar). 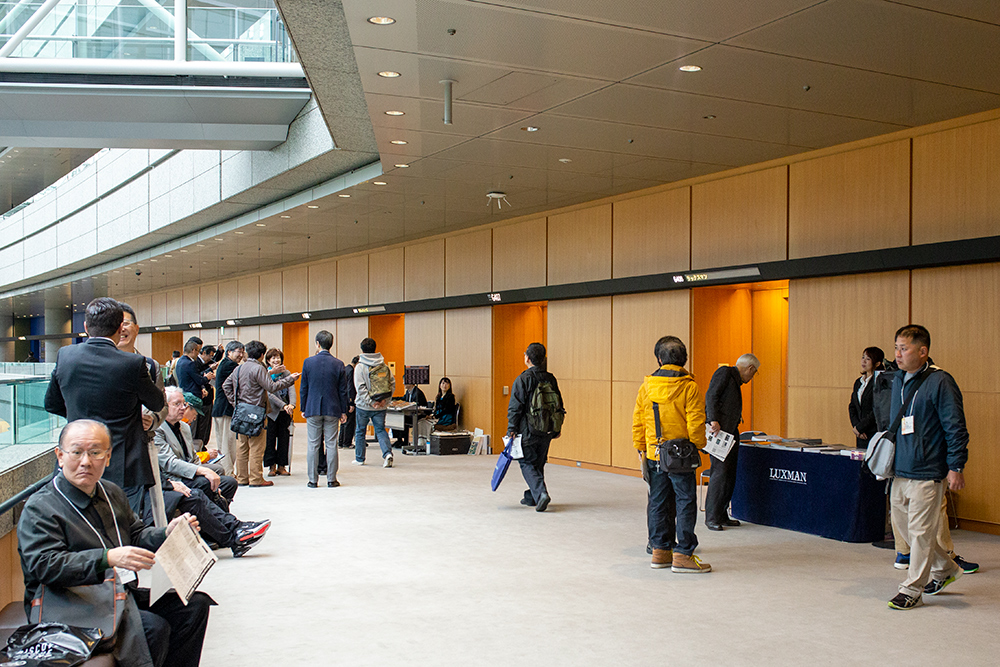 Luxman and Accuphase are obvious competitors, but because they’re right next to each other, I can’t help thinking that they both want you to see what the other is offering, as if to make it easier to comparison shop. It’s kind of like when similar stores are grouped together in a shopping mall. Below are the five new products that the companies had, with all prices in Japanese yen (¥). Currently, one US dollar is equivalent to 108.62 yen. 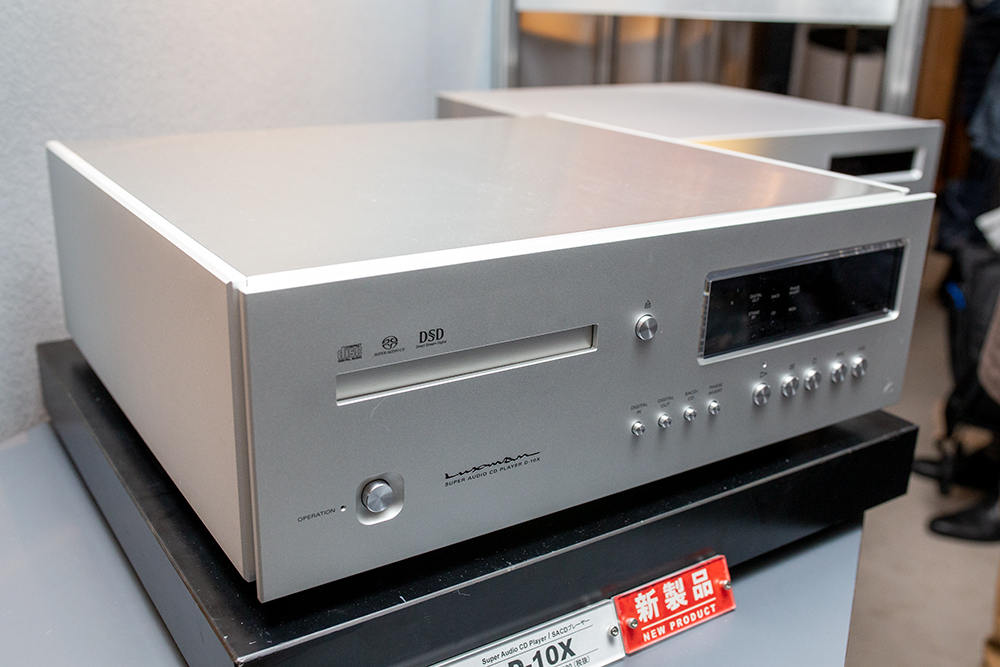 Luxman was showing its D-10X SACD/CD player, priced at ¥1,200,000. (As I mentioned in my first installment on electronics, discs are still big in Japan.) Although it’s primarily a disc player, when I saw the D-10X’s specs, I was as surprised as I was impressed at the file resolutions supported through its USB input -- PCM up to 32-bit/768kHz and DSD up to 22.4MHz. Very high, which means there’s a capable and thoroughly up-to-date digital-to-analog converter section inside. MQA is also supported via USB, as well as through CD (MQA-CD). PCM up to 24-bit/192kHz is supported through its one S/PDIF RCA and two TosLink optical inputs, but not DSD or MQA. Availability is in December. 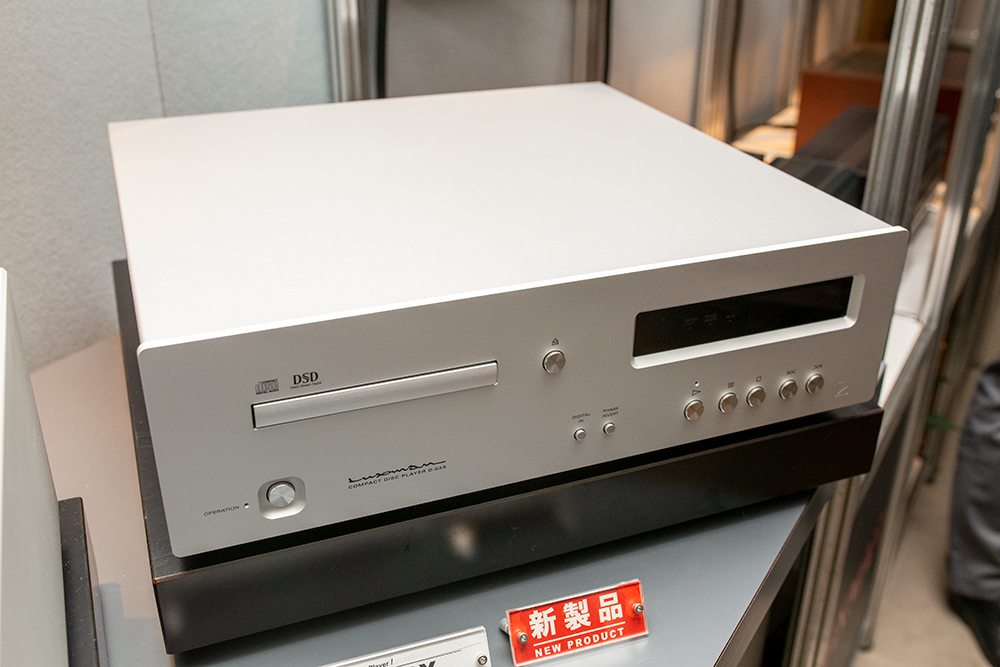 Luxman also showed the D-03X CD player, priced at ¥268,000, which also supports MQA via USB and through MQA-CD. The USB input also supports PCM up to 32-bit/384kHz and DSD up to 11.2MHz, so it too has a capable DAC section, if a little less elaborate than the D-10X’s. The S/PDIF RCA and TosLink optical digital inputs (one of each) support PCM up to 24-bit/192kHz. Like the D-10X, availability is in December. 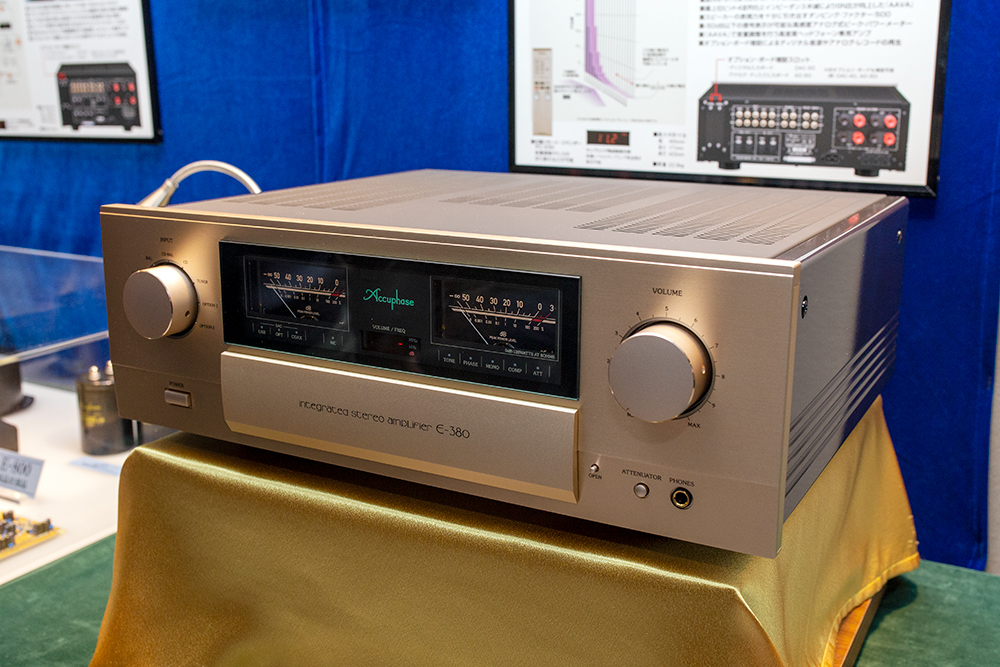 The first Accuphase product I looked at was the E-380 integrated amplifier, a class-AB design rated to continuously deliver 120Wpc into 8 ohms or 180Wpc into 4 ohms. On its back panel, the E-380 has five pairs of single-ended RCA inputs, two pairs of balanced XLR inputs, a tape loop, a pair of RCA preamplifier outputs, a pair of RCA amplifier inputs, and two sets of speaker outputs, making it handy for biwiring. Besides the input selector and volume control on the front panel, there are attractive left and right VU meters, plus a headphone jack. In its base form, the E-380 is priced at ¥450,000. On the back, however, there are two expansion slots. One will accommodate Accuphase’s DAC-50 DAC board (¥80,000), which has USB, RCA coaxial, and TosLink optical inputs, and the other is for the company’s AD-50 moving-coil phono-stage board (¥60,000). 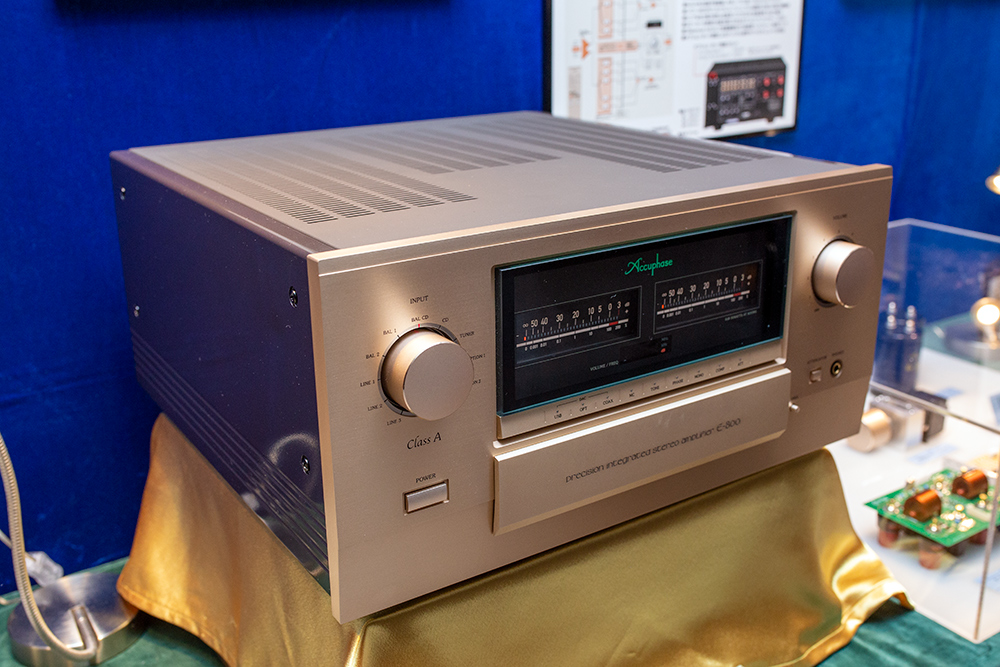 To the left of the E-380 was the massive E-800 integrated amplifier, a pure-class-A design rated for 50Wpc into 8 ohms, 100Wpc into 4 ohms, or 200Wpc into 2 ohms continuously. Priced at ¥980,000, the E-800 has three pairs of balanced XLR inputs, five pairs of single-ended RCA inputs, balanced XLR and single-ended RCA preamplifier outputs, balanced XLR and single-ended RCA amplifier inputs, and two sets of speaker outputs. Like the E-380, on the back the E-800 has expansion slots for the DAC-50 DAC digital and AD-50 phono boards, and on the front, an input selector, meters, a volume knob, and a headphone jack. A . . . 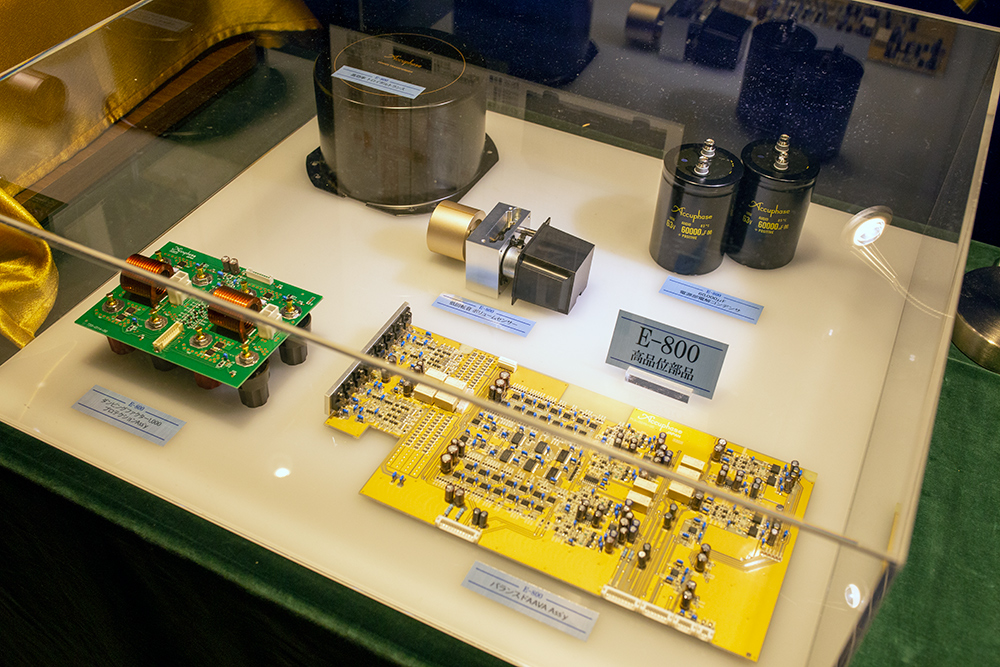 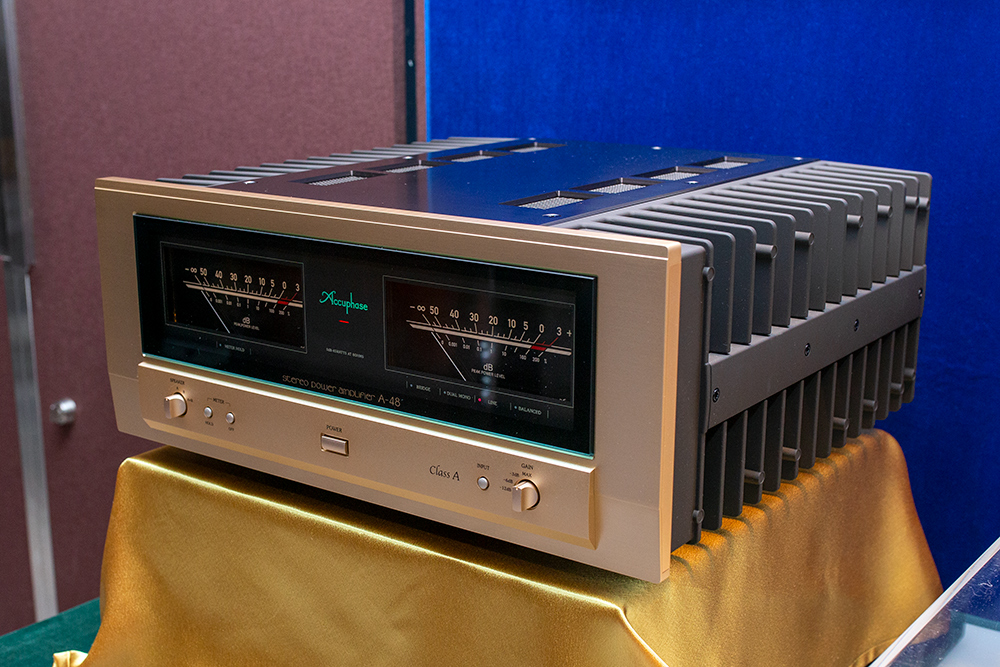 The final Accuphase product I looked at was the A-48 stereo power amplifier, priced at ¥680,000. It was my favorite of the Accuphase trio, partly because of the technology, but also because . . . 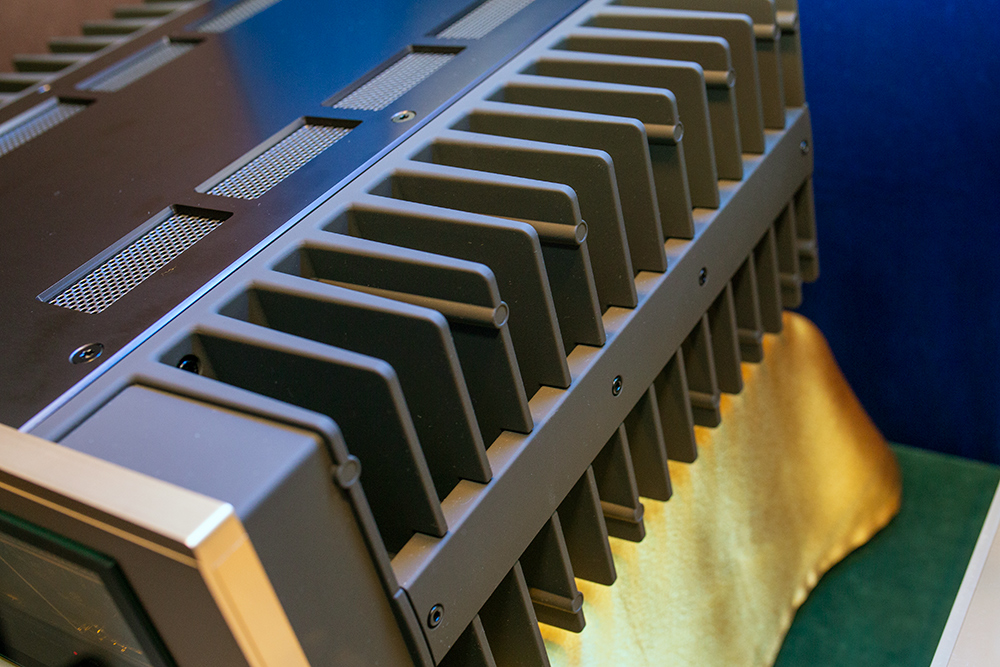 . . . of the striking design -- I really liked the way the heatsinks are placed along the side panels. The A-48 runs in class-A and is rated to continuously deliver 45Wpc into 8 ohms, 90Wpc into 4 ohms, or 180Wpc into 2 ohms. It’s also possible to run it in a bridged mode to deliver 180Wpc into 8 ohms or 360Wpc into 4 ohms continuously, and there are multiple gain settings: Max, -3dB, -6dB, -12dB (the lower the gain, the higher the signal-to-noise ratio). Unlike the other two Accuphase models, which I could only find Japanese information for, I could find English A-48 information that said this: “Featuring a six-fold parallel push-pull architecture with power MOS-FETs, as well as ideal gain allocation realized with discrete semiconductors in an instrumentation amplifier configuration, the A-48 harnesses a wealth of advanced technology. Its outstanding performance is exemplified by a signal/noise ratio of 117 dB, output of 360 watts into 1 ohm (music signals), and a damping factor of 800. The newly designed output protection circuit can detect any short-circuiting of the speaker terminals, for complete peace of mind.” 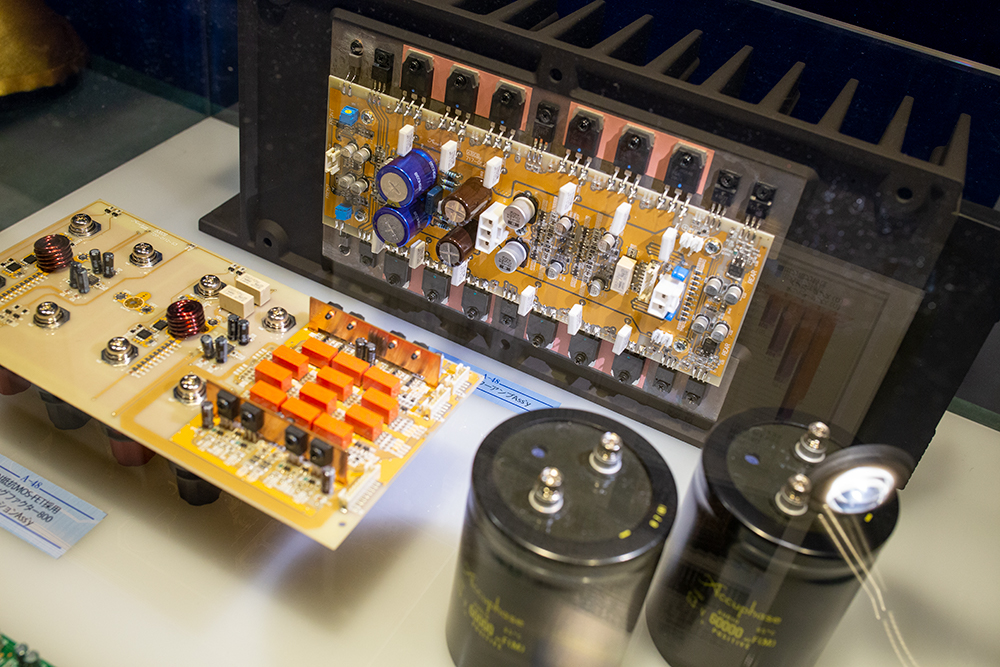 . . . a clear case showing some of the parts inside. Unlike Luxman, which is readily available in North America through a company-owned subsidiary, North American distribution of Accuphase has been spotty at best. I wish it wasn’t that way because I’d love for us to review some of the company’s products.