The UK Hi-Fi Show Live 2019 afforded me an opportunity I don’t often get at shows -- time to sit down and have a lengthy conversation with a designer. Usually, they’re too busy -- or I am. But in the room of Absolute Sounds, Sonus Faber’s UK distributor, I noticed that Paolo Tezzon had some time on his hands at the same time I did. Tezzon is Sonus Faber’s acoustic designer, so I didn’t want to miss this opportunity. I caught Tezzon’s attention and asked, “Want to talk about the new Olympica Novas for a few minutes?” He was happy to oblige. 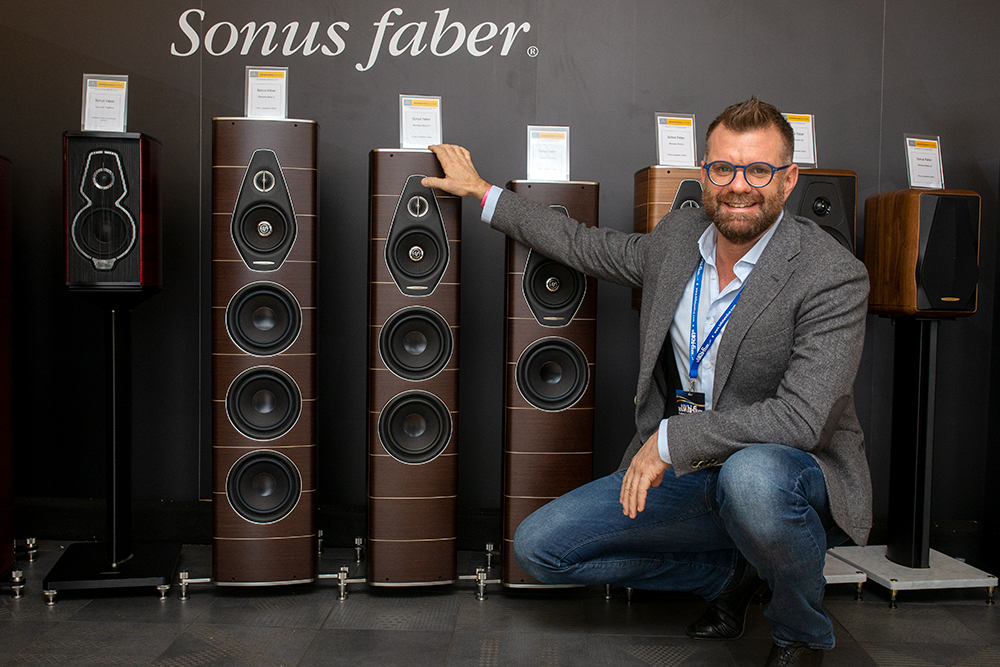 Olympica Nova is Sonus’s middle series -- below are the Chameleon and Sonetto models, and above are the Homage Tradition and Reference models. As with almost all of Sonus Faber’s current speakers, they’re made at the company’s factory, which is located in Arcugnano, Italy. When the Novas were launched, we published a video about them on our YouTube channel.

Tezzon is the guy who makes SF’s speakers sound like they do, but he’s not fully responsible for how they look. As a result, Tezzon usually isn’t the first person at Sonus Faber people run to talk to -- that person is Livio Cucuzza, the company’s industrial designer. That’s not surprising, because Sonus Faber makes some of the best-looking speakers on the planet. That’s definitely true of the Olympica Novas -- they look stunning. But in the last ten years, I’ve noticed that the sound quality of Sonus Faber speakers has steadily crept upwards, to the point now that they’re often praised as much for their sound as their looks. Hence my eagerness to talk to Tezzon.

Right off the bat, I asked, “Acoustically, in the Nova series, what were your goals?”

Tezzon’s first words were, “Oh, wow!” He took a few moments to gather his thoughts, and then laid it all out, first shooting back with, “We wanted to make the Olympica Novas as close as possible in performance to the Homage Tradition line, which was recognized globally as a very high-performance range of speakers.” 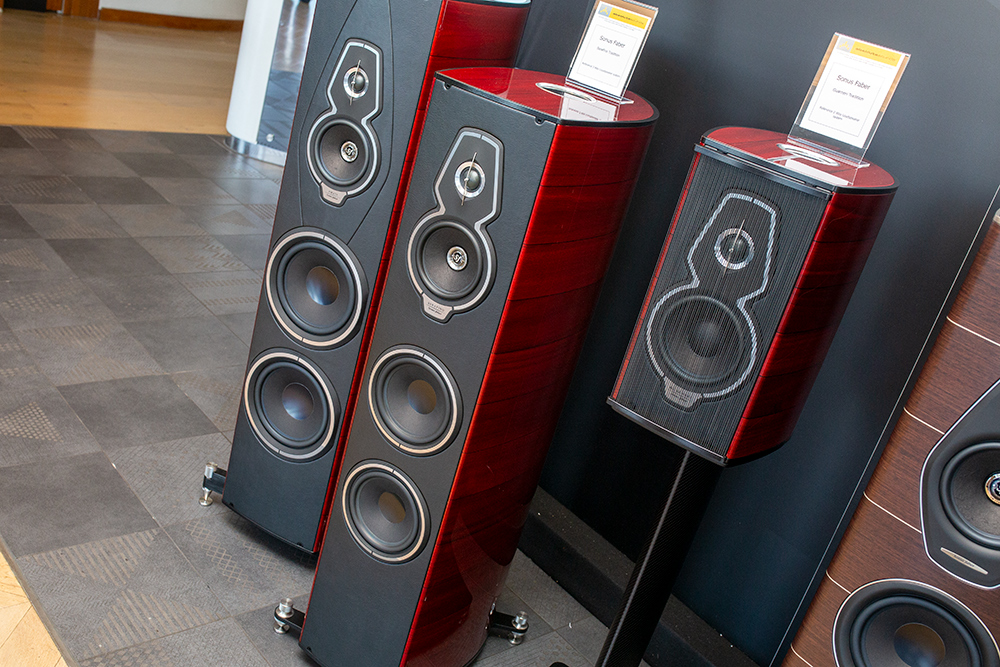 Tezzon went on to explain that getting the right tonal balance was relatively easy -- for years now, the Sonus Faber sound has been consistent across the brand’s lines. For the new line to be more like the Homage Tradition models, Sonus Faber had to improve “transparency, speed, and articulation,” Tezzon said.

To achieve these goals, the company created “a new implementation” of its DAD tweeter. DAD stands for Damped Apex Dome. If you look closely at most of Sonus Faber’s tweeters, you’ll see a small, curved metal piece in front of the tweeter dome. Attached to the top and bottom of the frame of the tweeter, that metal piece doesn’t actually touch the dome. At its center, where a little pointy part juts forward, there’s a small piece of foam jutting backward that does touch the dome, in order to keep its center portion in place. This stationary piece of foam helps to control the dome’s natural breakup tendency as it moves, in turn improving its off-axis response. 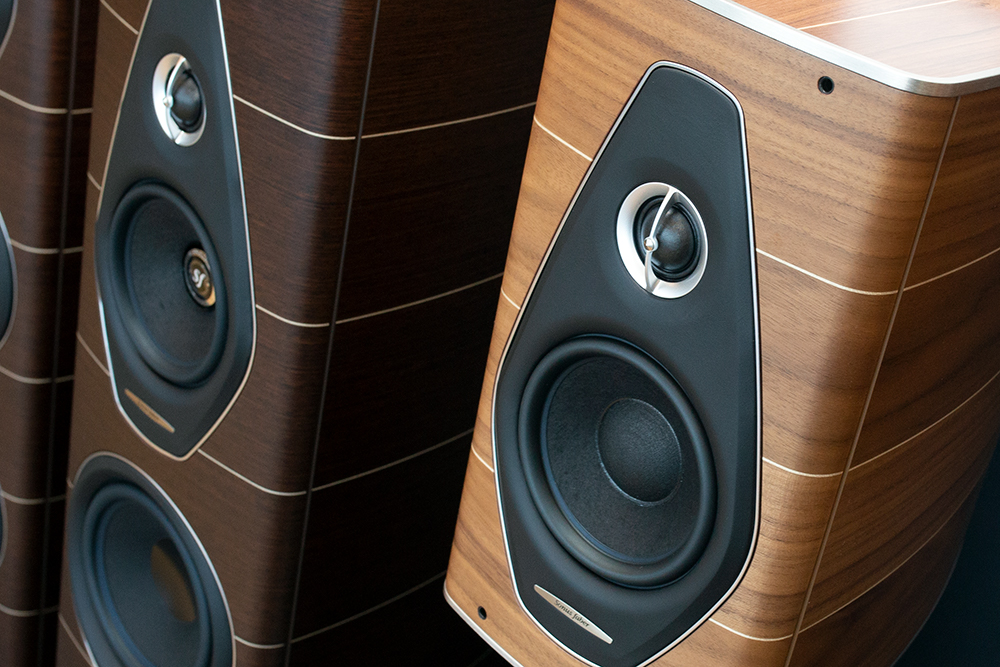 There’s more to the Olympica Nova series than the redesigned tweeter. Tezzon went on to say that they developed new midrange and bass drivers, which he called “simplified brothers of the Homage Tradition drivers.” Tezzon told me that the drivers in both series share several parts and use the same underlying technology.

Borrowing again from Homage Tradition, the Nova cabinet quality is a “big improvement” over the previous generation, Tezzon continued. First, the eight layers of wood that comprise each speaker’s cabinet wall make for a stronger, stiffer enclosure. Second, as in the Homage Tradition models, aluminum plates added to the top and bottom further increase strength and rigidity. Third, the interior has better bracing than the original Olympica series.

I then asked, “Can you allot a percentage to each of these in terms of their contribution to the whole?”

After I asked this, I realized that I might be putting Tezzon on the spot, since I’m not sure he’d thought about breaking down these elements quantitatively. But to my surprise, after several seconds of thought, he came back with a confident reply: “I would say 35% for the cabinet, 40% for the drivers, and what remains is the crossover, so 25%.”

I wondered if Tezzon had a favorite model in the line. Predictably, he said that he likes them all -- but then singled out the Nova I, because he tends to like small two-ways “for various reasons,” including the way they can sonically disappear into a room. But then he told me that he was surprised by what Sonus Faber achieved with the Nova V, the flagship of the new line (the original Olympica series topped out with the III). The Nova V has three 6.5" woofers, a 5" midrange, and the DAD tweeter, giving it a lot more output capability than the other models, which are smaller and use fewer drivers. “It’s an amazing, amazing performer,” he said. “I’m really proud.” 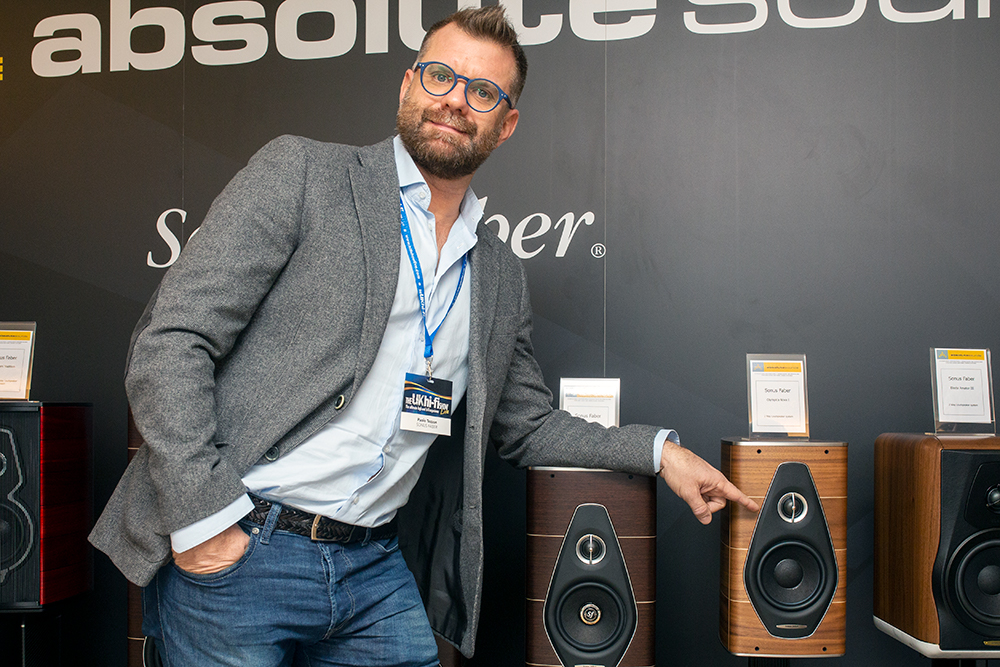 Paolo Tezzon pointing at the Olympica Nova I

At that point, I thought we were finished, but Tezzon wanted to talk about other speakers in the line.

“I want to point out that we offer two choices of center-channel speakers in the Olympica Nova line,” he added, “because we wanted to establish Olympica Nova as a line that can be used in extreme high-quality multichannel systems, and not only for stereo playback.”

The Olympica Novas weren’t playing at the UK Hi-Fi Live Show -- they were only on static display. But the speakers are readily available to consumers and reviewers. Jeff Fritz has the Nova III, a design that is also special to Tezzon, in for review for SoundStage! Ultra. Tezzon mentioned the Nova I and V models specifically to me when we were talking, but when I took the pictures of him that accompany this article, he pointed to the Nova III and said, “I still really like this model. It’s just right.” I believe it was Sonus Faber’s Will Kline, who appears in our Olympica Nova video, who told me a few months ago that the original Olympica III was the company’s best-selling model in that line.

Will the Olympica Nova line eclipse what the original Olympica series accomplished in terms of sales volume? Does this series get close to the performance of the Homage Tradition line, but at a lower price? I have no idea. But what I can suggest is that you seek the line out and listen for yourself. Whether people like what they hear will dictate the new Nova models’ success -- and whether they repay the effort Tezzon and his team put into their designs.