It seems acceptable to be fashionably late. But can you say the same about being fashionably early?

Moments after I entered EQ Audio Video, which is in Barrie, Ontario, I learned that I arrived too early for the Focal Powered by Naim grand-opening celebrations—like, way too early. That’s because I arrived there on Friday, June 10, whereas the opening was scheduled for a day later.

Ed O’Herlihy, who owns the store, was the first to let me know I’d arrived early. He also told me that the Focal Naim America reps who were there weren’t ready to show off the systems yet. In fact, Chris Shaw, a Focal Naim America product specialist, who traveled 1981 miles to be in Barrie—he lives in Edmonton, Alberta, which is basically half of Canada away—was in the middle of calibrating the Focal-based in-wall home-theater speaker system in the store’s biggest room. 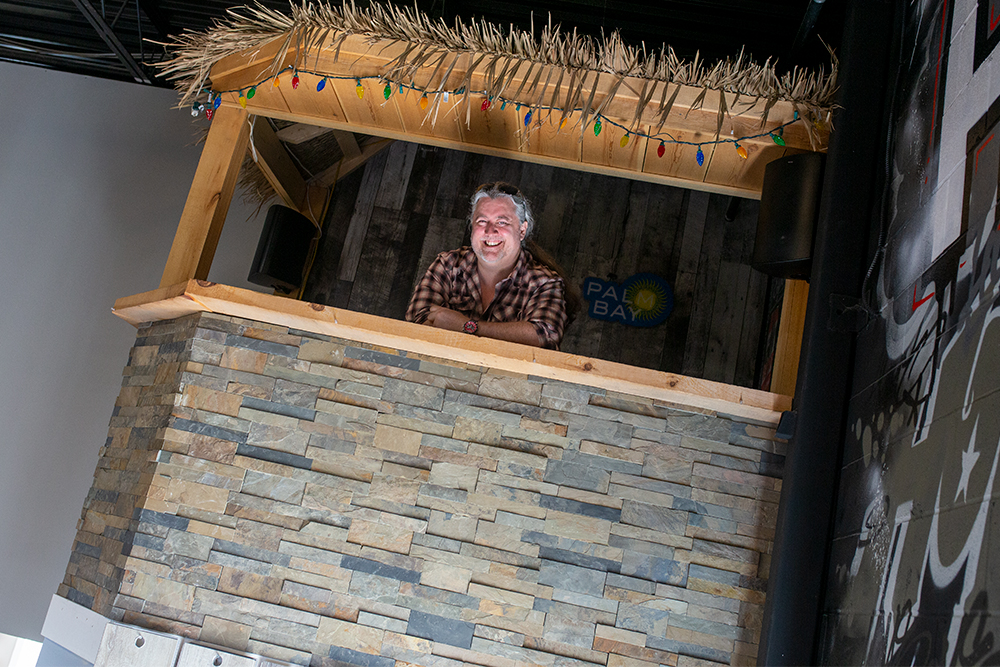 Ed O’Herlihy in the tiki bar.

Thankfully, O’Herlihy is used to thinking on his feet, probably because he’s been dealing with EQ’s hi-fi and home-theater customers for about 14 years—his store runs by appointment only, but he let me know that it’s not uncommon for people to unexpectedly drop by. I was now one of those unexpected people.

O’Herlihy quickly reorganized his schedule to accommodate me, which I appreciated. After all, there wasn’t much more he or I could do at that point—I had just driven from Toronto, which is about an hour away from Barrie, and I was going home to Ottawa right after, which is more than five hours away. He and I both knew that it was unlikely that I was going to stick around for a day, particularly since I was already there and obviously ready to learn what I could.

Since I was now taking up time he probably didn’t have, I immediately started quizzing him about what his store is about, because it’s unusual—it shares a joined space with a luxury kitchen-renovation company called Home Options Made Easy, though it’s important to note that the businesses and their ownerships are separate. I also wanted to know how his store’s Focal Powered by Naim association came to be. I was already familiar with some Focal Powered by Naim stores—last November I went to France to see Focal’s headquarters and woodworking factory, as well as to see two Focal Powered by Naim stores: one in Lyon, the other in Cannes. Those stores featured only Focal and Naim Audio equipment when I visited, whereas O’Herlihy’s store has sections dedicated to Focal’s and Naim’s gear, while also carrying equipment from other brands, making it the first of this type I’ve seen. 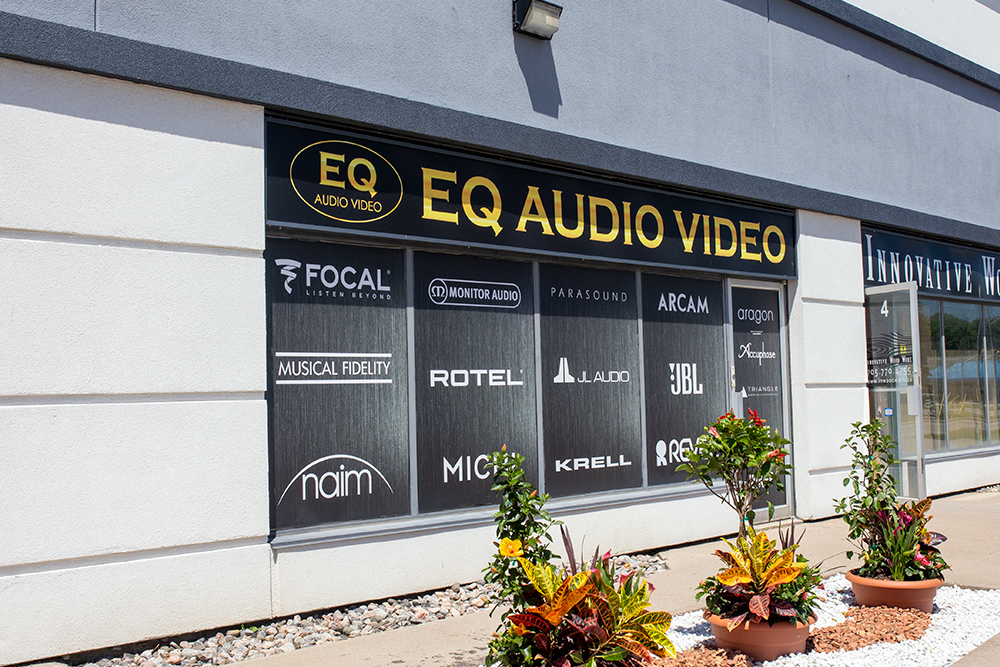 First the store: O’Herlihy has been an audiophile since he was 14, which, he says, gives him 30 years of hi-fi experience. With the help of his wife, Michelle, who is instrumental in running the business, which includes an online presence (EQ Audio Video has a great website), his hi-fi selling under the EQ Audio Video banner began about 14 years ago, though not as a brick-and-mortar retailer at first. That brick-and-mortar thing happened about seven years ago, when he opened EQ Audio Video in the same location where it is now, with the kitchen company. But back then he was on the main floor of Home Options Made Easy, occupying a small space where there are now some cabinets and tiles on display. Over time, EQ Audio Video grew to the point that it could move out of the main-floor spot and take over the top floor, plus the next unit over. This gave the business its own space, as well as its own entrance. 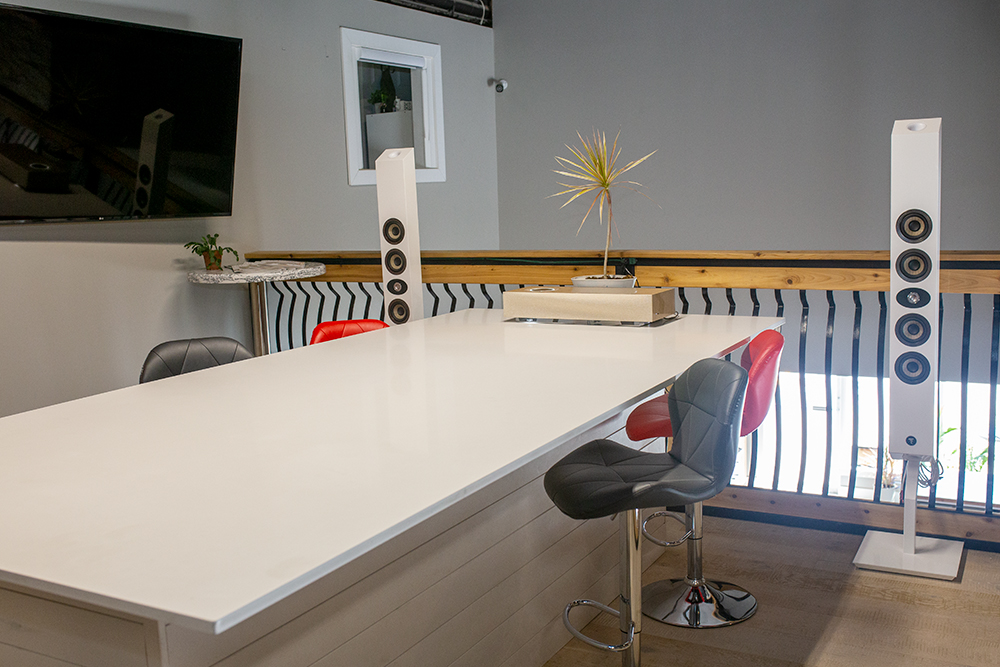 On that top floor is a kitchen-type space, which has a big table that had a Naim Audio Mu-so Wood Edition music system on one end of it and Focal On Wall 302 speakers flanking it, both set up for the grand-opening occasion. From up there, you can also see a tiki bar that overlooks everything—it was built just because someone thought it would be cool to do, and it was.

To one side of that space is a door that opens into a large hi-fi and home-theater room intended to represent a typical family room—it’s about the size you’d find in an average home, and there aren’t any audiophile acoustic treatments to speak of. Set up there were a pair of Focal Aria K2 936 loudspeakers, which I reviewed just over a year ago, with Naim Audio electronics lined up on racks between the speakers. 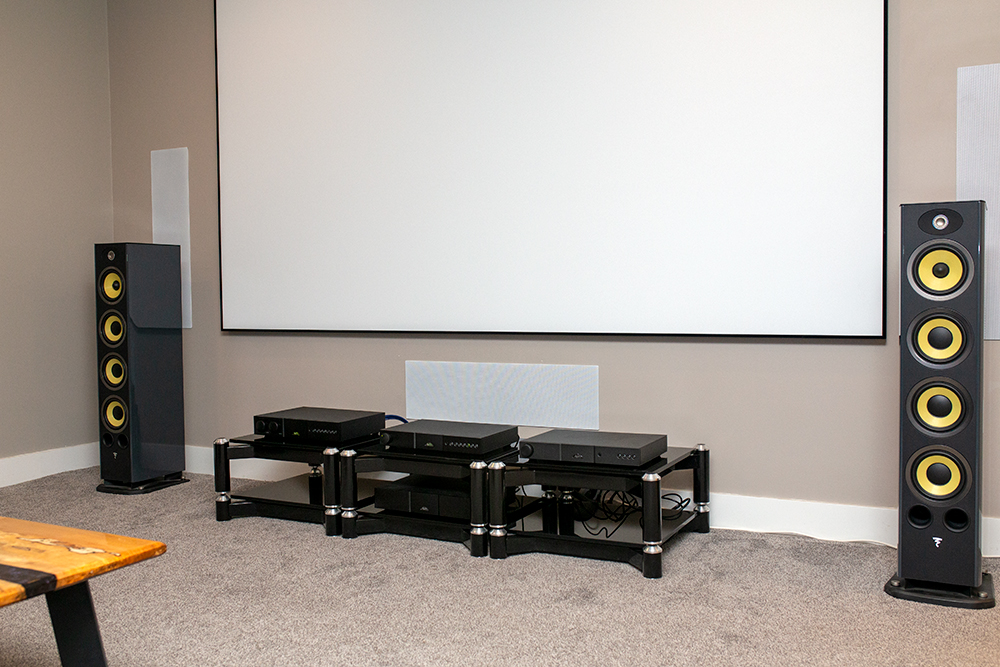 In one corner of that room is another door that leads to a bright and pleasant connecting space dedicated to Naim and Focal. There you can see the lit-up Focal Powered by Naim logo on one wall, as well as Naim electronics on shelves and, when I visited, a single Focal Chora 826 speaker on that same wall. On the opposing wall, atop a counter, was an assortment of Focal’s headphones.

To the right of the logo on the wall is a door that leads to the large listening room, which is where Chris Shaw was working for pretty much the entire time I was there. This room usually showcases Focal Sopra No3 speakers and Naim electronics front and center, but the speakers were pushed aside at that moment so that Shaw could get the Focal in-wall speaker system performing optimally for the grand opening. A look behind the screen is literally a showcase for what the Focal brand can provide for this kind of installation—the permanent installation at EQ includes multiple 1000 Utopia-series IWLCR in-wall speakers and IWSUB subwoofers up front, as well as other Focal in-wall models on the side and rear walls and in the ceiling, all being controlled by Focal’s Astral 16 processor. 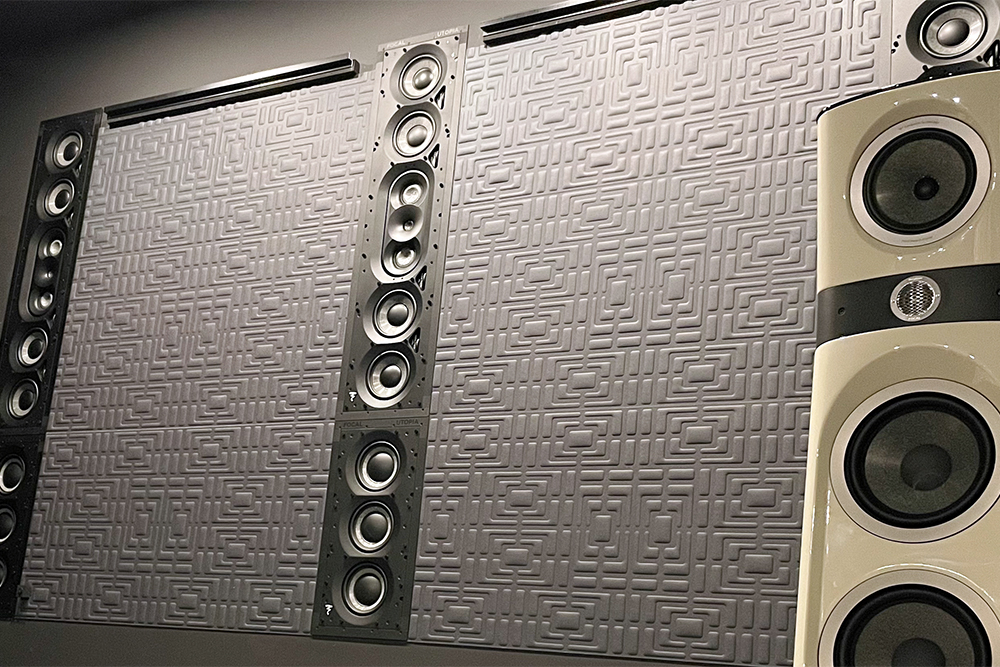 According to O’Herlihy, he designed the room himself, with the dimensions of it adhering to the golden ratio. Unlike the other listening room, which has minimal treatments, this one has plenty of wall and ceiling acoustical treatments, so customers can hear components under optimal conditions.

I scanned that room, and O’Herlihy and Shaw looked worried as they asked me when I wanted to listen to that system, because Shaw wouldn’t be done for some time. But I assured them that it was OK if I didn’t hear it that day—partly because I listen to a lot of systems as I travel around the world anyway, but it was mostly because my priority was learning about the store, including the relationship with Focal and Naim Audio. When Shaw heard that, I could sense his relief. 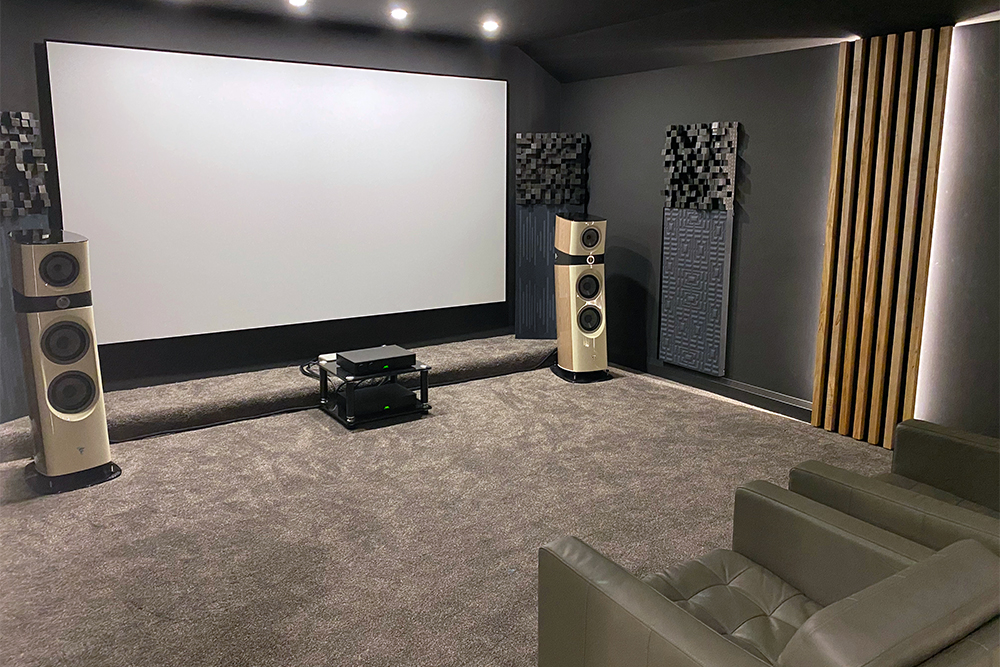 O’Herlihy told me that when he first got into hi-fi retailing, he figured it was best to have as many components from as many different brands as possible. That way he could simply tell customers to buy whatever they wanted without worrying that they’ll offend him or that he’d lose a sale. But he learned that not all hi-fi and home-theater components are created equal—just like there are very good components, there are very bad ones as well, along with everything in between, which made it difficult for him because he didn’t like the idea of selling poor-performing products to people. He also found out that customers often like it when retailers have more brand focus and can really get behind what they’re selling. It’s a confidence thing, I think. As a result, he pared down his offerings to brands he liked the most, which are what you see today at EQ Audio Video. 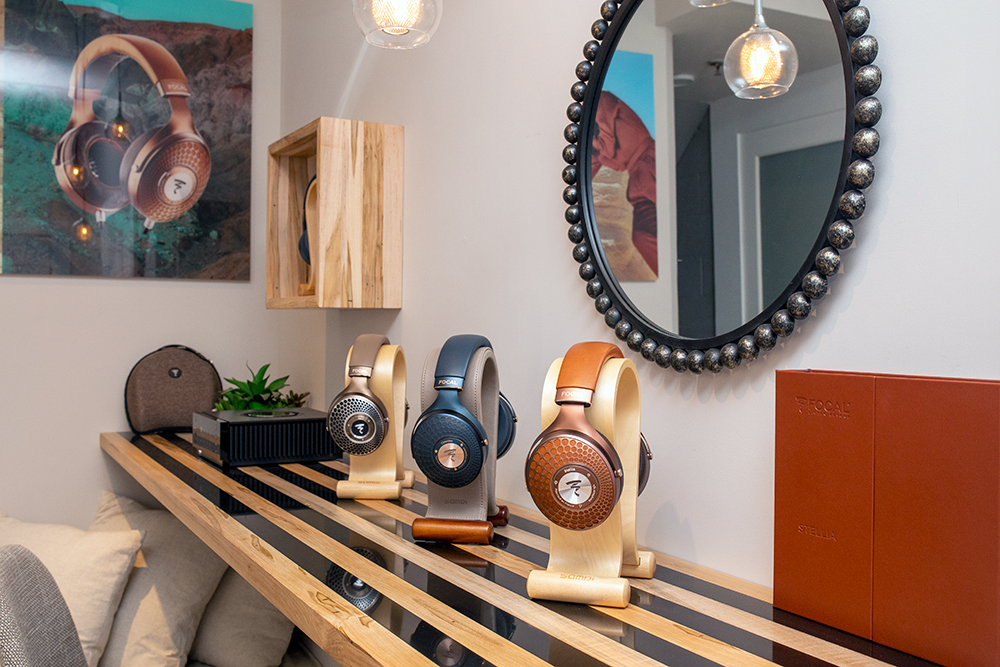 Two of those brands are obviously Focal and Naim. Now with the Focal Powered by Naim association, it’s clear his store is committed to the brands. But like I said, those brands only occupy spots in parts of his store, not all of his store like I saw in Lyon and Cannes. That’s actually not new. When I was in France with Romain Vet, who’s in charge of Focal Naim America, he told me that the Focal Powered by Naim strategy involves getting existing retailers on board, either with entire stores or parts of stores. So there are others like EQ around the globe, such as Perth, Australia’s Addicted to Audio store, which Edgar Kramer wrote about on SoundStage! Australia last year. And from what I learned from Wendy Knowles, the Focal Naim America PR rep, we can expect more to open in North America very soon.

This retail strategy differs from what some audio companies have done in the past. For example, Sony, Bose, Devialet, and others have opened their own stores, but how many of those do you see around anymore? Not too darn many—if any. That’s because it’s one thing to be a successful manufacturer, but another to be a successful retailer. The Focal and Naim strategy of licensing the Focal Powered by Naim brand to retailers who want to convert parts or all of their stores seems like a good idea, because it creates a win-win situation. It gives the Focal and Naim brands a strong retail presence without the companies having to own and operate stores, and it offers retailers a boost in presence by being associated with two brands that are known and promoted globally. 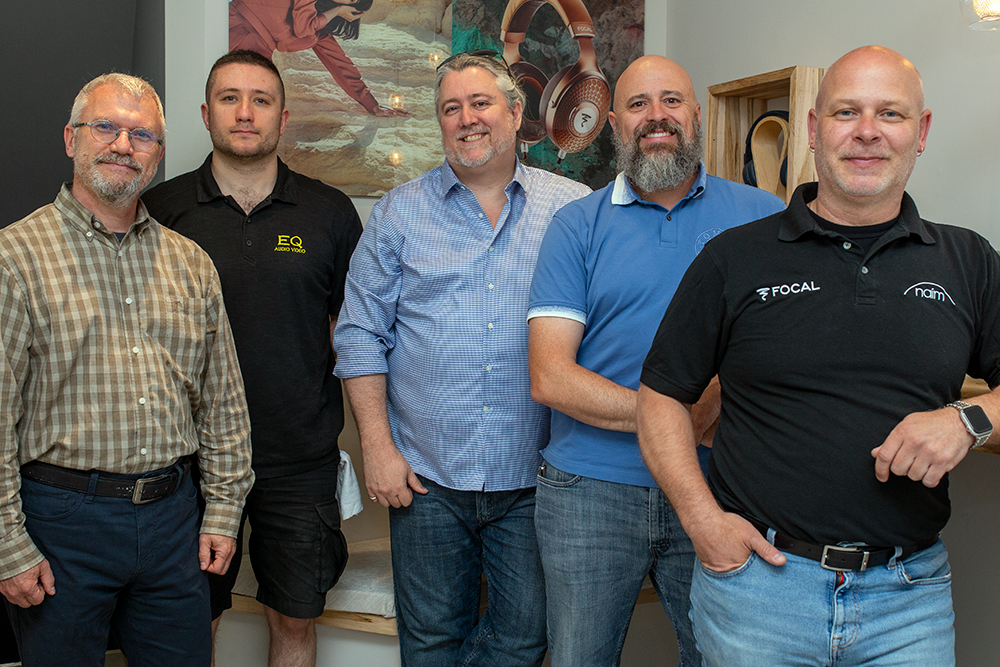 As I was driving home later that day, I was thinking that arriving early to EQ Audio Video was probably a good thing. Although I didn’t get to experience any of the systems in the EQ store, I likely learned a lot more about how the store was established, as well as how the Focal Powered by Naim association came to be. If I had arrived on Saturday and there were a lot more people there, I wouldn’t have gotten O’Herlihy alone. So while being fashionably early can be a little embarrassing and uncomfortable, as it was for me when I realized my mistake—it can also have its advantages.