Canada has had a relatively low per-capita death rate from COVID-19 since the pandemic began, and when you adjust for population size, Canada currently boasts one of the highest percentages of single-dose vaccinations in the world. Despite these successes, provincial governments across Canada are still maintaining strict lockdown measures, in the hope of avoiding a fourth wave of coronavirus outbreaks and unnecessary deaths. But these lockdowns have kept many businesses closed and countless people out of work.

As a result, I was a little surprised to receive an invitation a few weeks back from Lily Luo, owner of Motet Distribution—Canadian distributor for Accuphase, PMC, Triangle, Lumin, iFi Audio, KLH, and other hi-fi brands—to attend a May 23rd live-music event featuring Les 9 de Montréal, an ensemble of young and very talented Canadian musicians, for their first performance at Place des Arts, a theater venue in downtown Montreal, Quebec. I live in Ottawa, Ontario, which is a two-hour drive from the theater, so getting there wasn’t a problem, but I wondered how the hell were they going to stage the event given the restrictions then in effect? 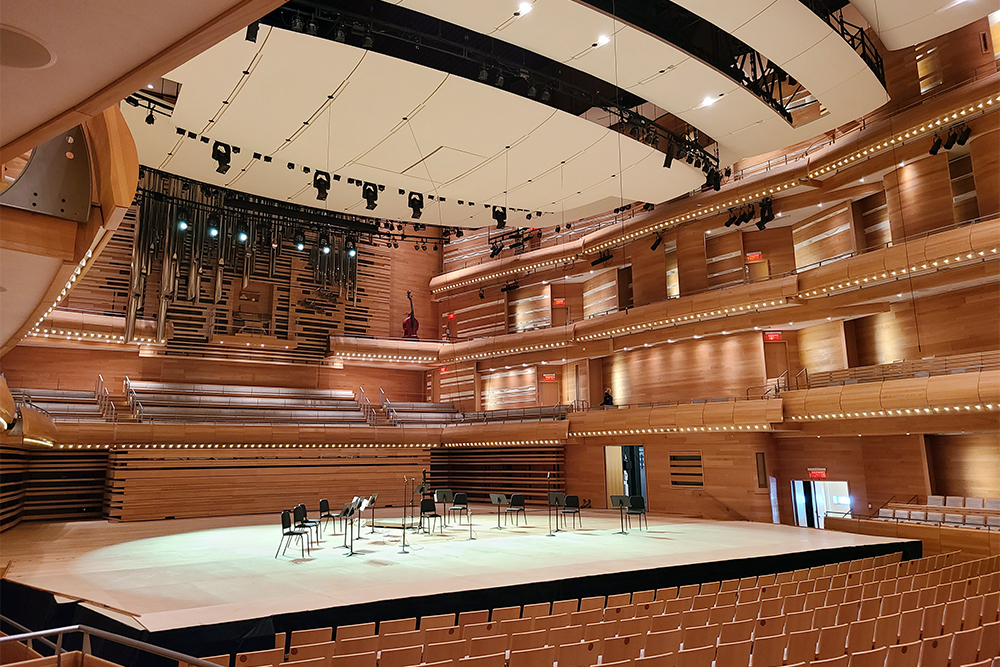 The group, a nine-piece, all-acoustic ensemble, is comprised of eight cellists and one double-bass player and was founded by cellist Vincent Bélanger, its musical director and one of its musicians. I already knew Bélanger from Antwerp, Belgium, in 2018. He was there playing live, and we produced a video about his remarkable ability to produce a unique hornpipe-sounding facsimile with his cello.

The event was produced by GFN Productions, a Montreal-based promoter of live musical events, and was sponsored by Motet Distribution’s Quebec-based arts and entertainment division, Motet Art & Musique, and Denis Chabot, a Montreal-based musician, producer, and recording-studio owner. Motet was also donating a pair of Triangle Borea BR09 loudspeakers to be raffled off to a lucky ticketholder. (The pair retails for $1400 in the US, so consider the speakers a very generous prize.) 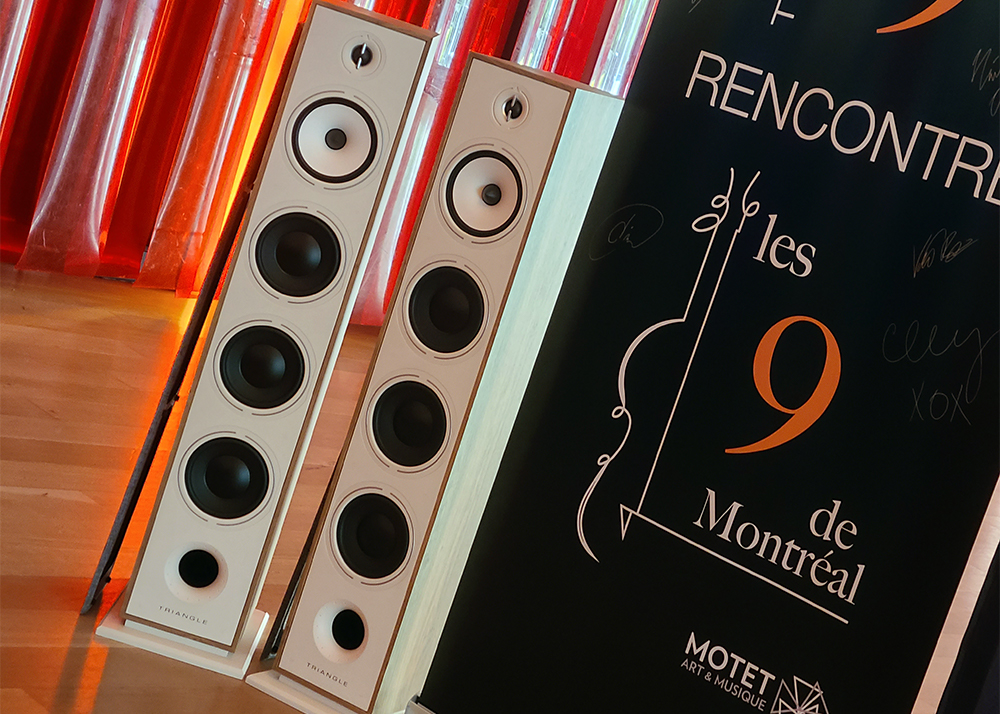 I’d be surprised if GFN Productions made any money at this event; however, making money for the company didn’t seem to be the goal this time around. The beautiful Place des Arts can accommodate about 1500 people, but due to current provincial restrictions, no more than 250 people were in attendance and everyone had to wear masks and be socially and safely distanced from one another. Following the event, I talked to Nicholas Choinière, GFN’s VP of operations, who told me that the performance was staged in an effort to get live musical performances up and running again in Quebec—and, admirably, to pay the musicians who took part. Musicians have not been able to earn a living wage as a result of COVID-19. 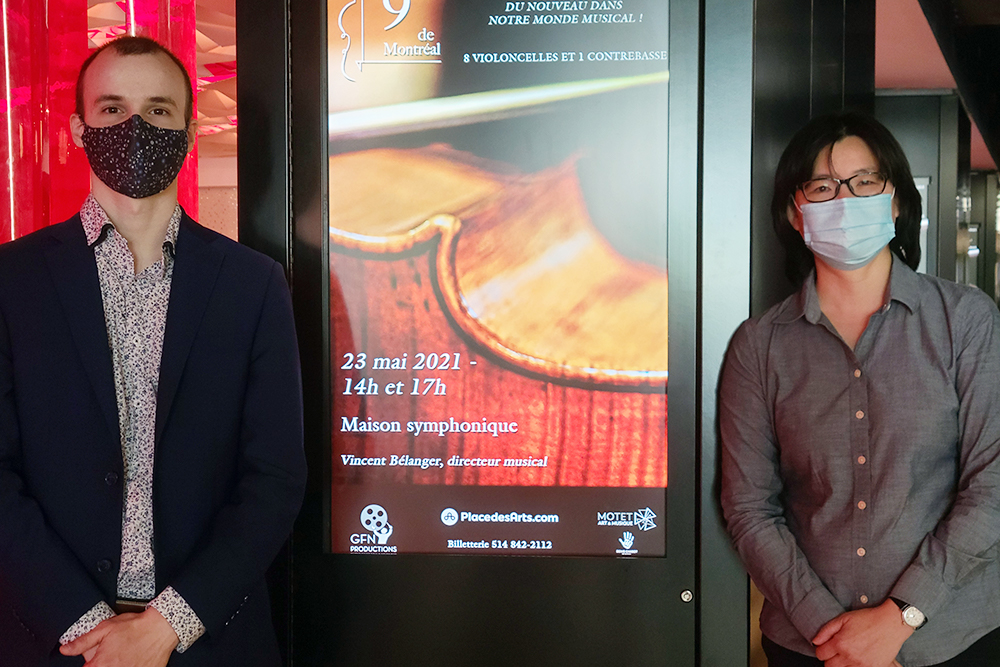 The concert started with very little fanfare, with the performers seated apart from each other, spanning the entire 35-foot expanse near mid-stage. Etienne Lafrance, playing bass, was center stage, flanked by four cellists on either side of him for many of the songs. This configuration changed from time to time as warranted by the particular piece being played. When Bélanger approached the front of the stage to introduce a piece to the audience, he naturally did so in French. While I do not understand French well, I could tell that he hadn’t lost the touch he displayed in Belgium—he’s a charismatic performer and speaker who certainly knows how to entertain an audience with the universal language of music.

I was sitting seven rows back, just to the left of center stage, where I had hoped to be able to capture some good photographs of the occasion but was soon told by security that no pictures were allowed. I had snuck one by them, as you can see below, so I put my camera away. Unburdened with picture-taking, I was able to simply relax and enjoy the concert. 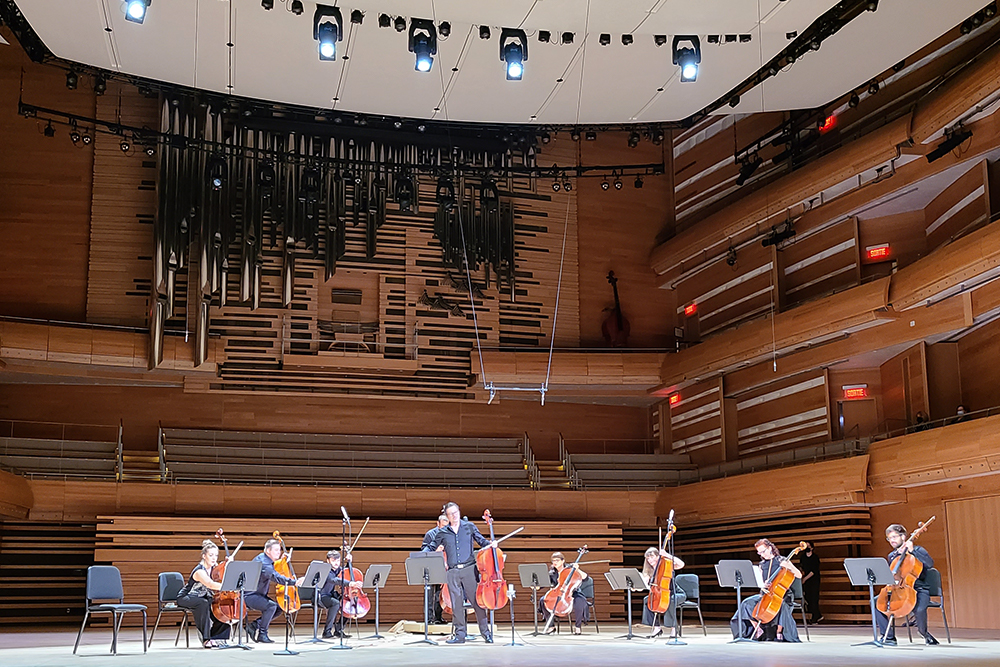 Bélanger and ensemble played for about an hour and 15 minutes, much to the delight of the audience, and the music was wonderful. Admittedly, before the concert began, I wondered how engaging eight cellists and one bass player could be. For a few songs, perhaps, but for an hour and some, who knew? My question was soon answered with the well-deserved standing ovation the audience gave the group. They were convinced to return for a short encore, and all in all it was a great experience of a perfect length. 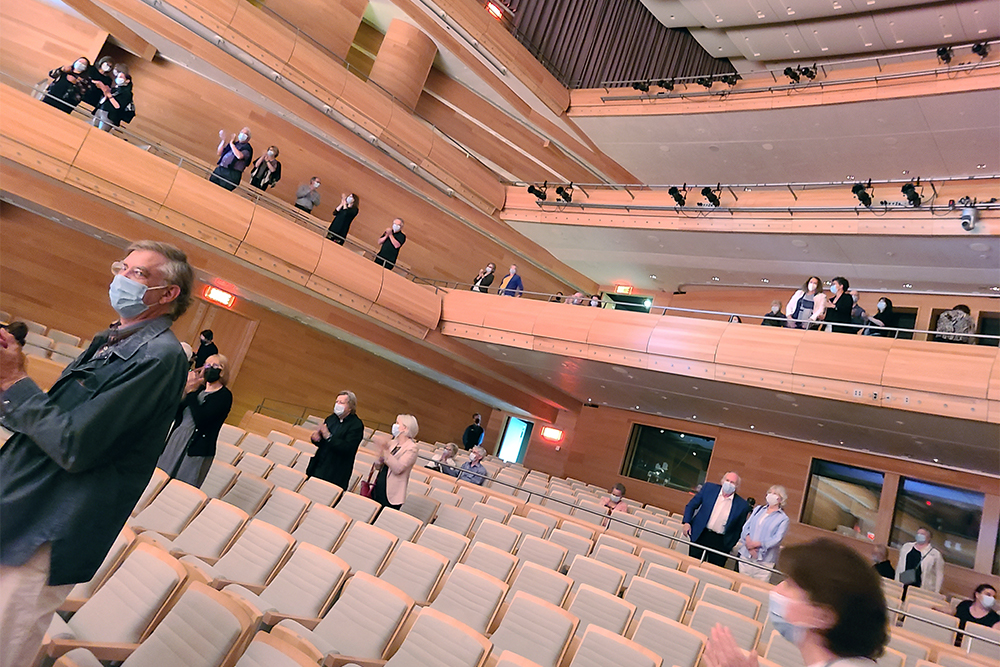 As an audiophile who mostly listens to recorded music in a room, it was not only enjoyable but educational for me to be seated in such proximity to the players that I was able to appreciate the individual positioning of the musicians on the stage but also the acoustic contributions of Place des Arts itself. As the pictures show, the interior of the concert hall is constructed primarily using wood. Apart from the cushions on the seats, not much sound damping material is apparent, and as a result, the theater has a lively and reverberant sound—neither over the top.

When the musicians played as one, it was interesting that their sound created a lot of energy in the upper bass and lower midrange. The cello is said to span the frequency range from 65Hz to 988Hz, with harmonics up to 8kHz, while the double bass gets down to about 41Hz but understandably can’t reach the higher frequencies. The theater’s shape and materials combined to act as a natural acoustic amplifier for instruments, and also added that special Place des Arts flavor to produce the final acoustic result. The sound was such that, even with my eyes closed, I could pinpoint where each musician was sitting, while simultaneously being enveloped by the sinuous atmosphere created by the ensemble. 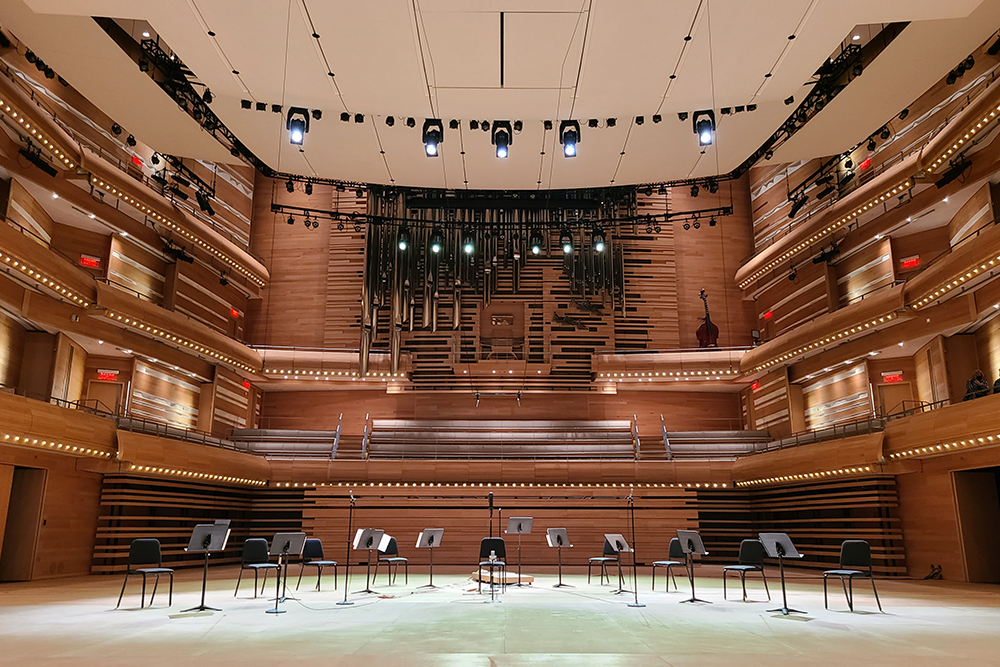 I noticed a large number of microphones around, some placed on the stage, and others hanging from the ceiling. I don’t know which were in use, but knowing that both Charbot and Bélanger are involved in recording, there is no doubt that the May 23rd concert was expertly recorded and will more than likely be released as a digital download or stream, and ideally some physical format, such as LP or disc. If a recording is released, I’ll be very interested to hear how it sounds through a hi-fi system, as compared to what I heard from where I was sitting.

Leaving Place des Arts after the show and walking around for a bit in downtown Montreal I could not help but think that what I had just experienced was a bit surreal. I’d been to a live musical event in an indoor theater, something that most people haven’t been able to experience in well over a year. Yet on the outside, stores and restaurants were still closed, and people here and there had little to do aside from walking and window shopping. The stark contrast of the two scenarios made me realize that the concert I had just attended was like that small light at the end of the long, dark tunnel. It provided the hope that perhaps the end of this terrible pandemic is nigh.

Things will never go back to being precisely the same after the pandemic is declared over. But although it may take a while to get used to them again, many of the things we enjoyed before the global health crisis will return. Count on live-music shows making a comeback. So, hats off to GFN Productions, Motet Art & Musique, Denis Charbot, and, of course, Les 9 de Montréal for taking this bold step in the right direction and pointing us toward some sort of normalcy in these not-so-normal times.