When the Paradigm Founder Series 100F loudspeakers first arrived at my house in two boxes, a couple of things immediately popped to mind. The first was that the boxes were much bigger than I thought they’d be, since this isn’t even the largest model in the line—the 120H is. The other had to do with the finish they came in, which I first read on one box: Black Walnut. I dislike almost all black-colored speakers, so I thought, Why did they have to send me them in that finish? 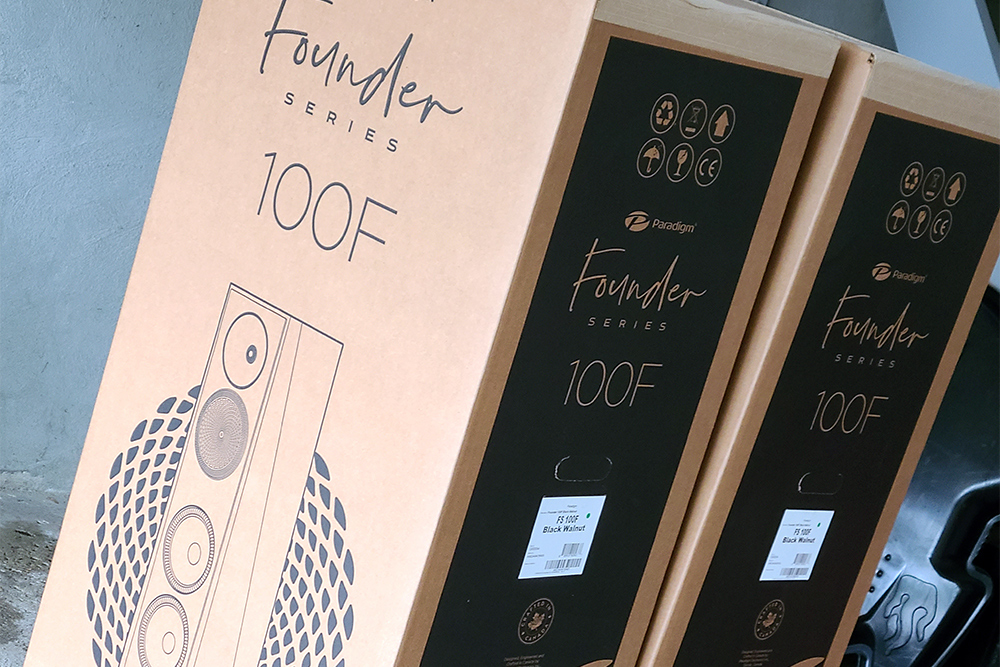 This is the first speaker line that Paradigm has introduced since Scott Bagby and his son John took back full control of the company in the summer of 2019, something I wrote about on SoundStage! Hi-Fi in October of that year. (If you don’t want to read that entire article, here’s the story in a nutshell: Scott cofounded Paradigm with Jerry VanderMarel in 1982, but VanderMarel left in 2005. That same year, Scott brought in Shoreview Industries as a partner, which Scott and John bought the shares from in order to acquire full ownership.) I was told that Scott really challenged the engineering department on this project, even delaying the line’s release by about a year until he was satisfied with the result. Once finished, the staff felt Founder was an appropriate name for the series, given Scott’s commitment to it. 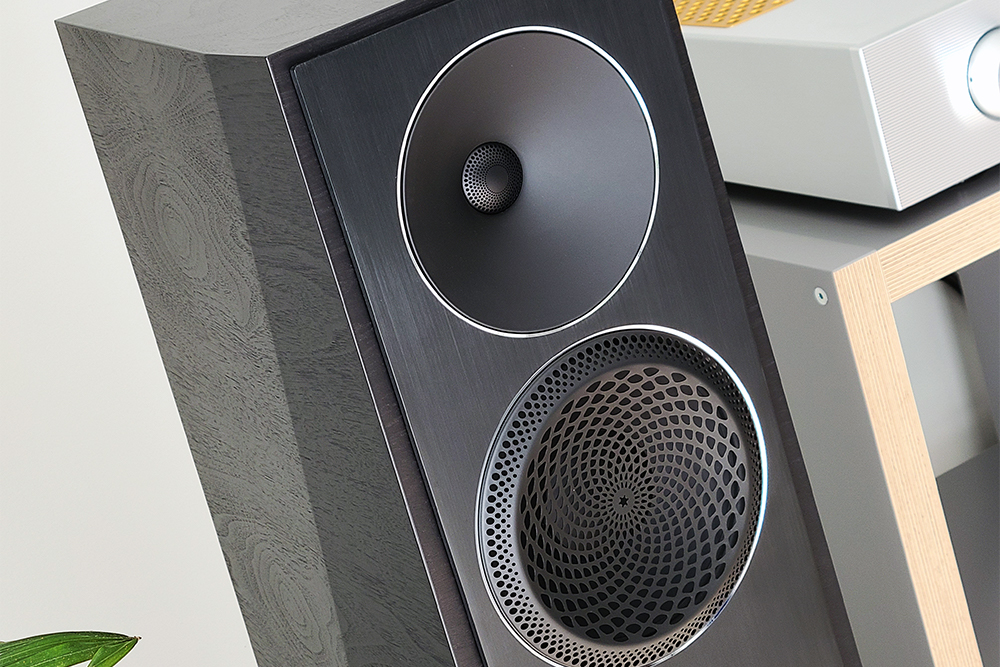 The Founder loudspeakers are chock-full of Paradigm’s technologies, with most of them on display in the 100F. The 100F has a 1″ tweeter with an aluminum-magnesium-ceramic dome (Paradigm’s name is AL-MAC) nestled into the throat of a much larger waveguide than Paradigm has used for previous speakers. Covering the tweeter dome is a Perforated Phase-Aligning (PPA) lens, which first showed up in the company’s Prestige models and later in the pricier Persona range. Think of the PPA lens as a really advanced phase plug, so it controls dispersion. The midrange has a 6″ aluminum-magnesium (AL-MAG) cone with a much larger PPA lens over top of it. The midrange frame is mounted to the cabinet with what Paradigm calls a Shockmount Isolation Mounting System. The 100F has three 7″ Carbon-X Unibody woofers, each bound to the cabinet with the Shockmount system. Each woofer has a mineral-infused carbon-fiber cone and a corrugated surround. Paradigm calls the surround’s shape Active Ridge Technology (ART), which is said to allow for greater excursion and lower distortion. 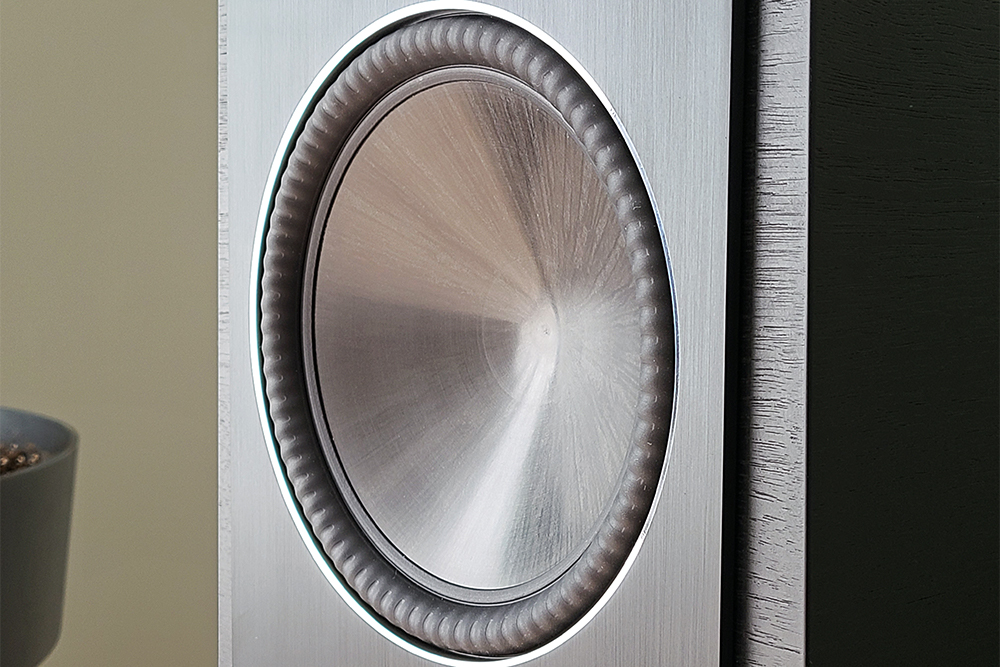 The 120H is similar to the 100F, but it has a larger cabinet and 8″ woofers instead of 7″ ones. But the biggest difference between the two models is that the 120H has a built-in amplifier to power its bass section, and it has ARC Genesis built in for advanced room-correction capabilities, to tame nasty bass modes. The 120H sounded really appealing when Paradigm offered review samples, but I wanted to review the 100F because, as useful as a powered bass section and room correction can be, many audiophiles still prefer fully passive designs that they can tie their own amplifiers to.

That stuff I just rambled off I learned from the literature before the speakers arrived, but what I first saw when I wheeled the boxes up to my house on a dolly and began to unpack the speakers in the space just inside my front door was the 100F’s very-large bottom-mounted port and the nifty outrigger legs, which, for shipping purposes, are turned to the inside. 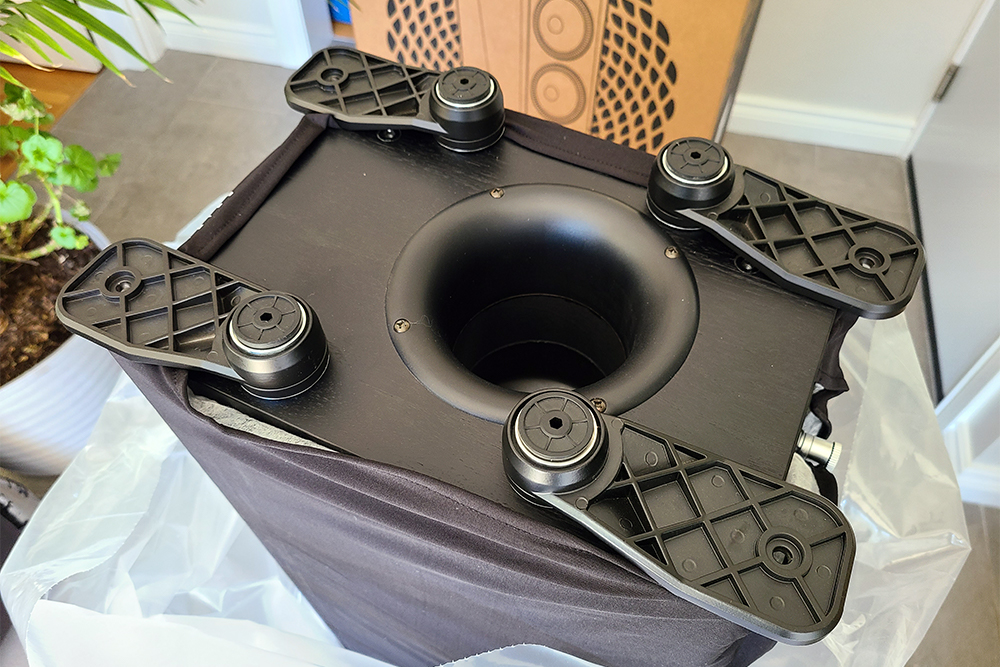 To seat the legs properly, you have to first take them right off and turn them around so that a peg on each leg fits into a pre-drilled hole in the cabinet. Then you affix each one to the cabinet with a supplied bolt that screws into another hole. After that, you can slide the spikes into the footer holes. It’s an easy two-minute job.

At first I thought the legs were made of plastic, but after I knocked on them and tried to dig my fingernails in, I couldn’t tell for sure—they could be plastic or powder-coated metal or some sort of composite material. I plan to find out more when I write up my formal review. At the footer part of each leg is some spongy material, which means that when the spike is pressed in, it’s not firmly placed like it would be if you just inserted a floor spike into a footer that’s rock-solid throughout. Instead, the spike is allowed to move around some, so I think this system works to damp resonances going from the speaker to the floor, and from the floor back into the speaker. This footer system is new from Paradigm. 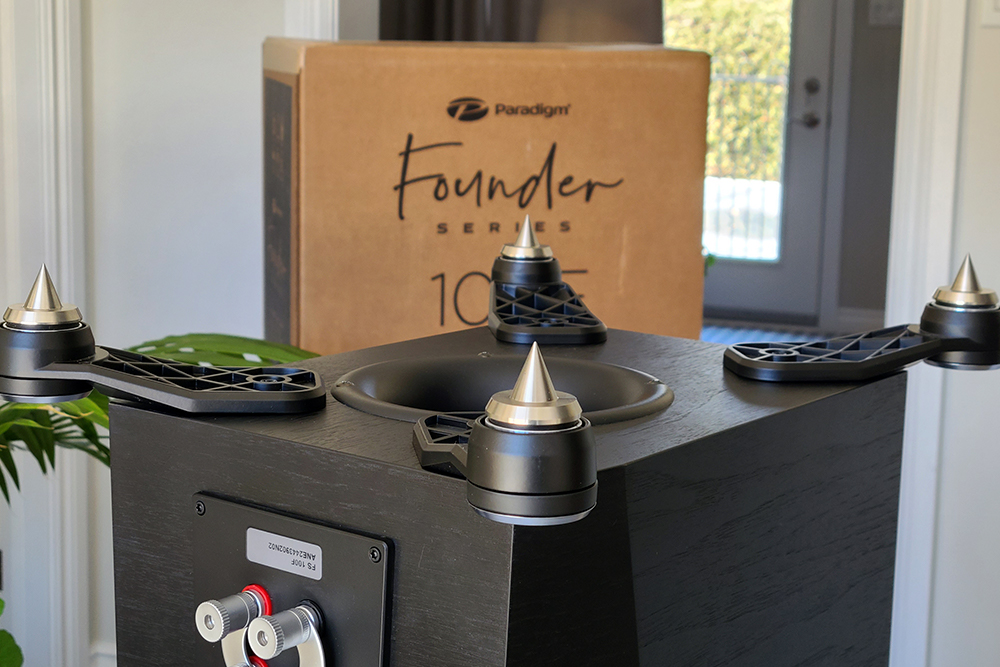 One after the other, I got each speaker out of its box, stood it on its feet, and took off the protective bag that surrounded it. Then I got my biggest surprise—not even set up yet, the 100F looked so much better than any pictures I’d seen of it, even in the Black Walnut finish. In fact, this finish looks so good that if I bought a pair, I might consider getting them in it.

I was also surprised by how elegant the cabinet looks. It measures 41.9″ x 12.9″ x 16.1″ at, respectively, its highest, widest, and deepest points, and it’s made mostly from MDF, topped with real-wood veneer. It’s pretty big. But unlike Paradigm’s previous speaker cabinets, which have had traditional box-type shapes (the Prestige and Monitor models, for example), or flat fronts and rounded backsides (Persona, Tribute, and Signature), the cabinets for the 100F and the other Founders are tapered from bottom to top and from front to back. There are also sharp-looking, angled bevel surfaces that bisect each side. These tapers and bevels and angles are all design elements no Paradigm I’ve seen has had. But just like the Persona models, each Founder speaker has a thick, one-piece, solid-aluminum slab that surrounds the drivers and covers most of the front baffle. A magnetically attached grille is also supplied for each speaker, and it covers the aluminum entirely. But the speaker looks so good without it that I think most people will leave it off. I also found that the pair sounded better grille-less—more open and better extension in the highs. 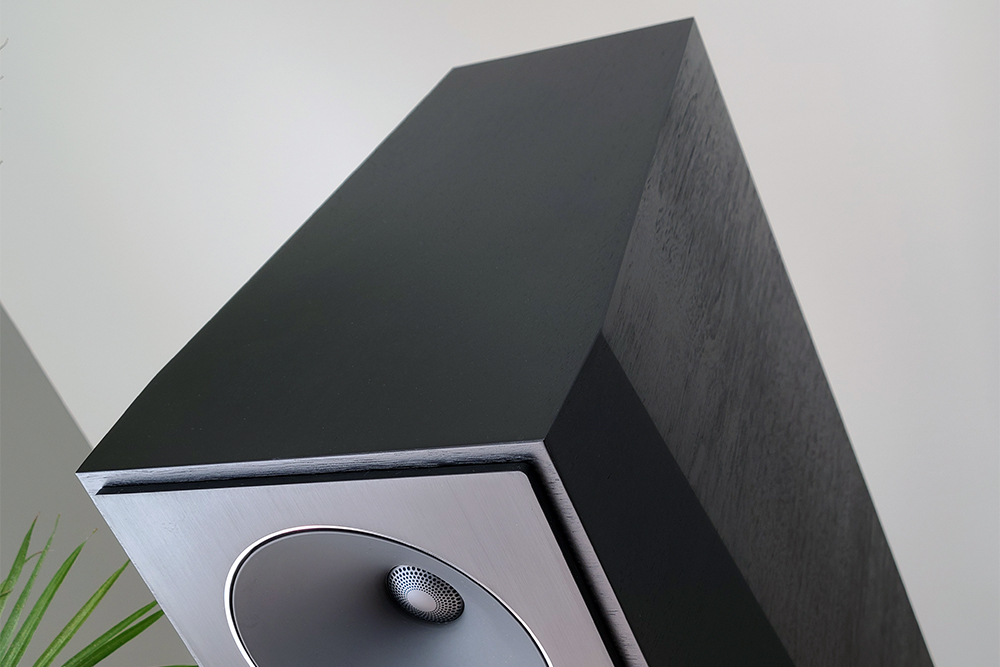 These complex cabinet shapes are surprising for the speakers’ modest prices and are a departure for the brand. But based on what I’ve now seen in the 100F, I think the move will be successful—this model in this finish is the best-looking Paradigm I’ve ever seen. What really makes this finish work is the fact that the black topcoat isn’t super-black, nor is it shiny—it’s more like a matte charcoal, which makes it more sophisticated looking than most black-colored speakers I’ve seen. Furthermore, the aluminum plate on the front baffle is dark grey; the woofer cones are lighter grey; and the tweeter’s waveguide, the PPA lenses on midrange and tweeter, the surrounds on the woofers, and the outrigger legs are all black. The subtly different color shades work well. To add some contrast and pizzaz, shiny trim rings surround the drivers, waveguide, and tops of the footers. The result is a speaker that looks muscular and bold, but at the same time upscale and refined.

Founder speakers come in three other finishes—Piano Black, Midnight Cherry, and Walnut—so if any or all of those look better than Black Walnut, I can’t see most consumers not liking at least one of the finishes and loving these new designs. What’s more, this line is made entirely in Canada—that’s quite something given their reasonable prices. 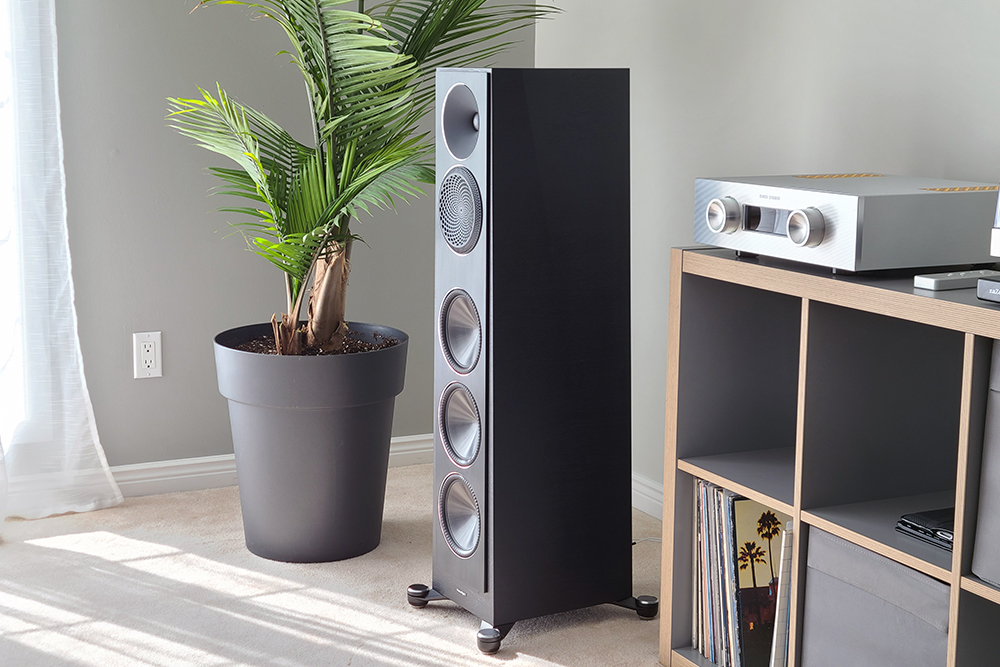 Because of the 100Fs’ super-good looks, I didn’t move them upstairs to my large reference room right away. Instead, I moved them into my living-room system, which is where I audition the components I write about for my “System One” column on SoundStage! Hi-Fi. I figured I’d break them in and get some initial impressions to write about here—plus, I wanted to show them to my wife to see if she’d like a pair of these on permanent display there.

The Kinki Studio EX-M1+ integrated amplifier that Roger Kanno reviewed on SoundStage! Hi-Fi last year was already set up, so that’s what I used to power them—it delivers about 200Wpc into 8 ohms. Speaker cables were QED XT25. A Chromecast Audio streamer and its built-in DAC allowed my wife to stream music from Tidal to the Kinki and on to the speakers, while I used the Pro-Ject Audio Systems X1 turntable I own and an iFi Audio iPhono3 Black Label phono stage that I borrowed from fellow writer Jason Thorpe to play some of my records. 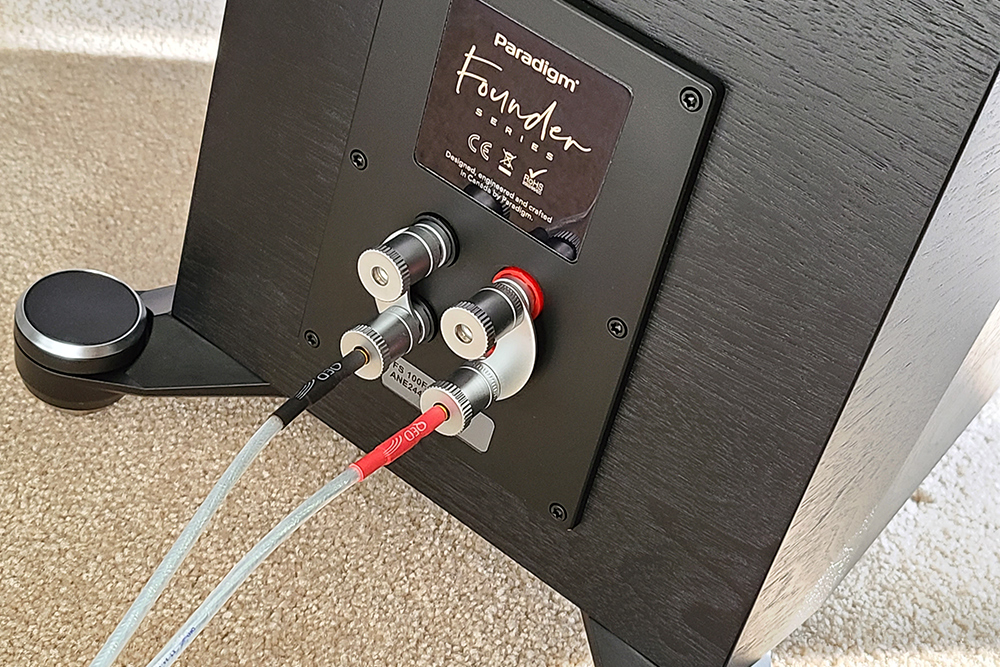 As I was setting the speakers up, my wife told me she liked the way they look and then asked, “Can these play loud?”

“I’ll let you be the judge of that,” I replied.

So the moment I had everything connected, she opened the Tidal app on her phone and selected a playlist of Latin dance tracks to stream. Not long after the first beats stormed through the room, she remarked, “These sound good—like really good.”

She also liked how they looked in the room, but she wondered whether they’d be too big to keep there. I then told her about the smaller 80F, to which she said, “Maybe.” 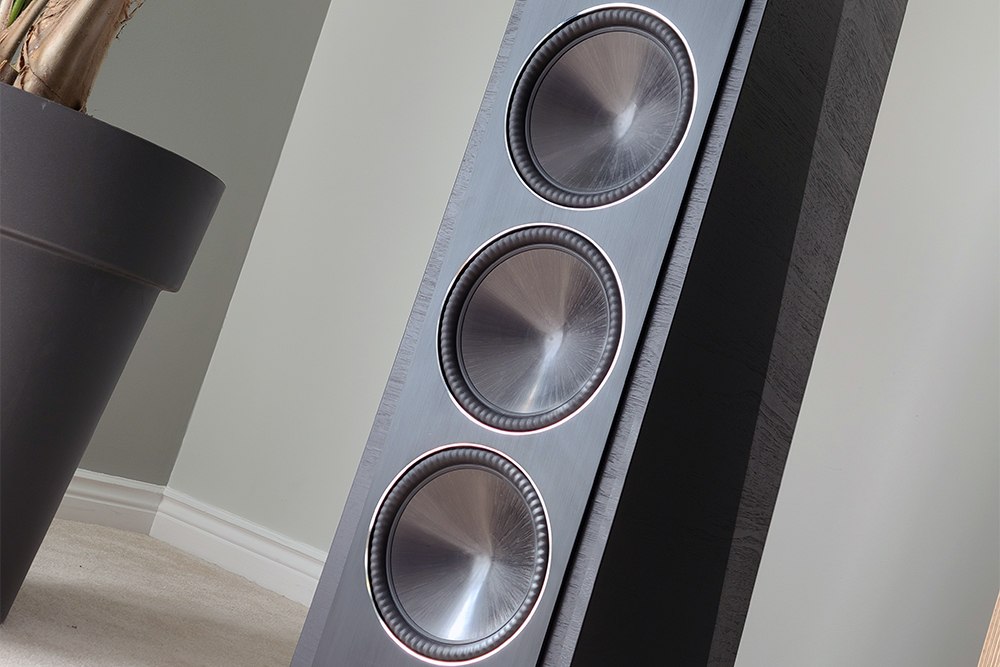 I let her run through her entire playlist, which took a little over an hour, as I listened casually. During that time, I noticed that the speakers had a lively top end, but it wasn’t too bright. They also had deeper bass than any speakers I’d ever had in there—there was solid output down to 30Hz, at least—but in fairness to any other speakers that had been there before, they’ve all been smaller and much less expensive than these. And the 100Fs played way louder than I’d ever need them to, as well as loud enough for her. But what I noticed most of all was that the midrange sounded just a little bit forward and was really clear. Vocals on the music she played popped big-time!

Later, I pulled out some records I know well and listened more critically. I found that the bass wasn’t only deep; it was also ultra-tight and wickedly detailed. These aren’t like the Paradigm speakers of yesteryear, which could deliver deep bass that was sometimes a little flabby—I heard iron-grip control with the 100Fs. Those highs were again spirited, but not too bright. But it was that midband that stood out once more, with voices that were clear and popping forth in a really pleasing way. 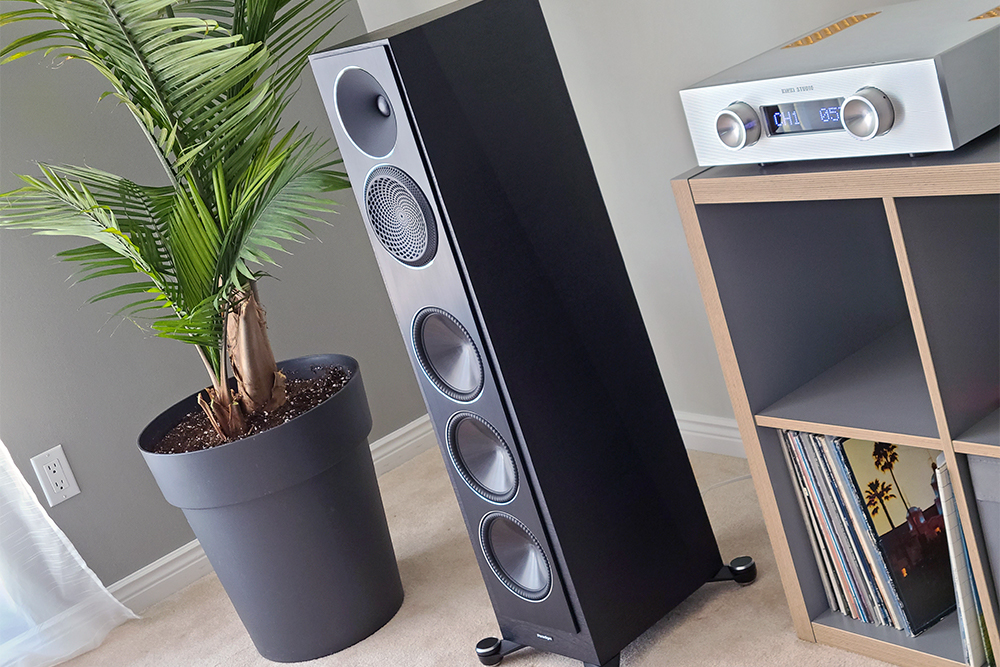 That’s all I’m going to say right now, however, because I still have a review to write, and this is only the beginning. My plan is to listen a little more in this setup and then move them up to my reference room for the bulk of my listening. After that, they’ll be photographed in my studio and then measured in the anechoic chamber at Canada’s National Research Council. That’ll take some time, but you can still expect the full review to be published on SoundStage! Hi-Fi on June 1 at the latest. In the meantime, don’t wait for my review—Paradigm’s latest line holds great promise, so check it out if you can, and let me know if you agree with what I’ve written so far.