It’s not often that I second guess my choices of review gear. For the most part, I’m left to my own devices for arranging products, although a fair number of items come my way by recommendations from Doug Schneider or Jeff Fritz, who manage SoundStage! But they know my system and my preferences. And for damn sure, they know the size of my room when they’re choosing speakers.

You’d think by now I’d know that too.

However, since the 2019 Montreal Audio Fest, I’ve often thought about my experience with the Klipsch Klipschorn AK6 speakers in the Gentec International room. It was late, and we’d finished writing for the night, so we were congregating at the bar. I was sorta kinda lit, and Dick Tuerlings, the managing director of Gentec’s audio division, asked fellow reviewer Diego Estan and me if we’d like to nip downstairs for a private audition. 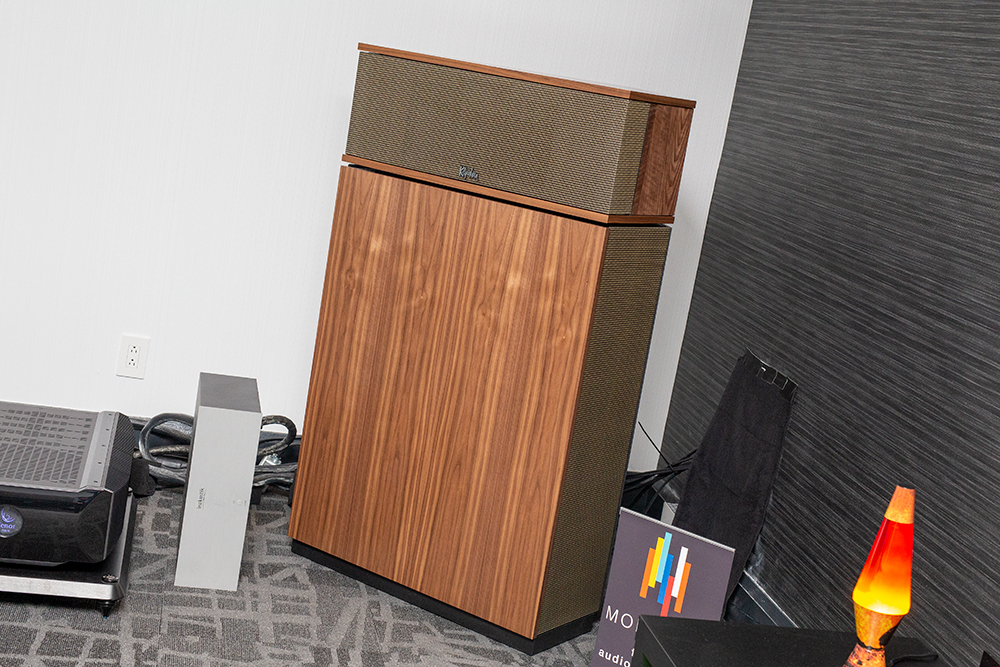 So we were sitting there listening, and I made the mistake of asking Tuerlings just how loud these things could go. He started wicking the volume, and it was a whole lot of fun until he cued up Dire Straits’ “Money for Nothing,” at which point he really gave it whiskey throttle. It got louder and louder, and then it was suddenly just too fucking loud. Estan and I clapped our hands over our ears at the same moment, for we were surely risking hearing damage.

Here’s the thing: despite the volume being at a level that was far, far too loud to listen to—even for a moment—there was still an unbelievable sense of clarity and absence of distortion to the sound that I could feel down at the cellular level. I had never experienced anything quite like that.

So like I said, my mind kept going back to those speakers. The Klipschorns were far too large for my room, but the La Scala AL5 speakers, from the same Heritage series, promised a healthy dose of that same over-the-top delivery in a smaller package. So after much deliberating and measuring, I finally pulled the trigger and asked Tuerlings if he could swing me a set for review. The ball started rolling, with Klipsch USA firing up the band saw and building me a pair. 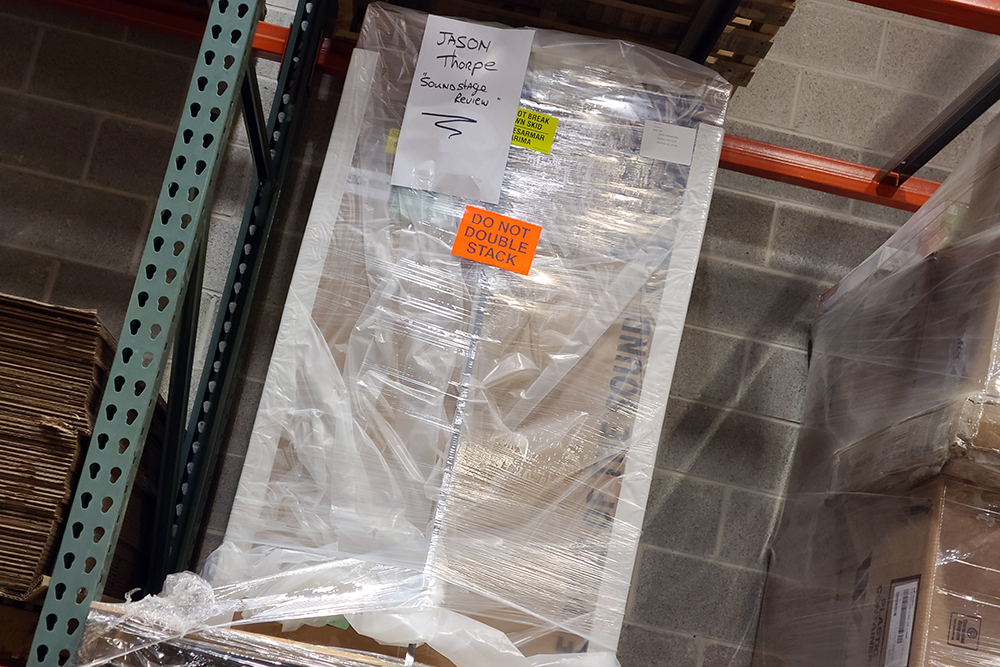 Looking at the Klipsch website, I began to second-guess myself. At 24″ wide by 25″ deep, the La Scalas seemed like they should fit in my room. But at 200 pounds each, they sure as heck were a lot of speaker. I had measured, though, confirming that, yes, they’d fit. And, yes, I could get them into the room. Still, that’s a lot of speaker . . .

“But they need to go back against the wall,” I told myself. “It’ll work. I think.” 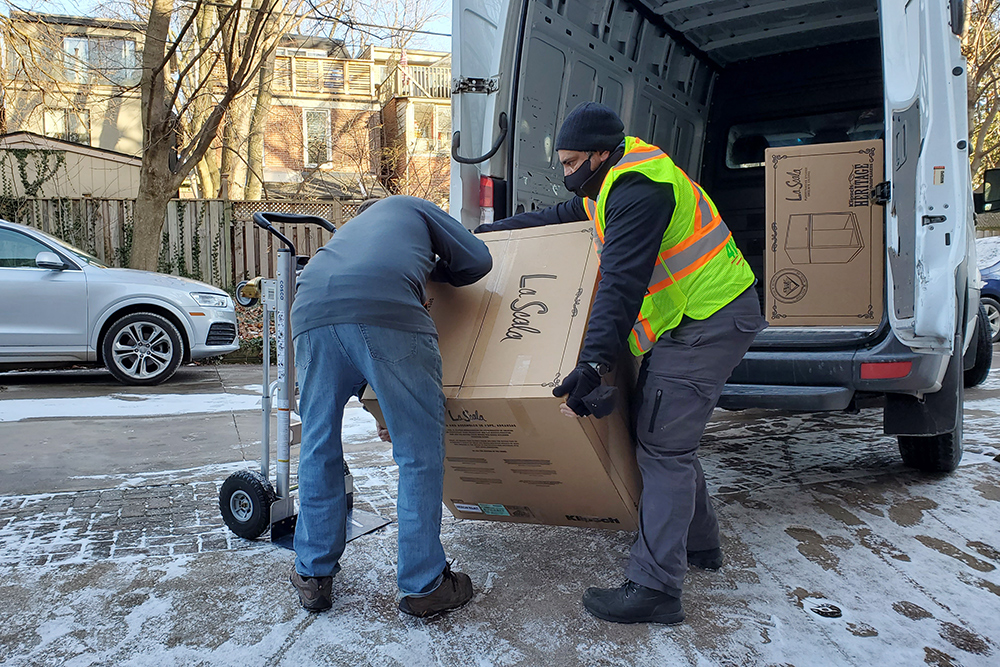 The wheels were in motion. Tuerlings called me, and we set up a delivery date. Zuber Shaikh of 4Way Express arrived right on time with a big honking truck. The La Scalas were the only cargo, but those four boxes took up a fair bit of space. There’s no way you could haul them around in an SUV or station wagon.

The size of the boxes didn’t faze Shaikh. He hauled the first one down by himself, and then we proceeded to decant the speakers. Two large boxes, two smaller boxes. The larger ones contained the bass cabinets, while the smaller (but still large) ones encapsulated the midrange and tweeter enclosures. The instructions on the large boxes were clear: open the top, flip the speaker upside down, and pull the boxes off the top. That left the woofer enclosures right-side up. It was fairly quick work to plonk them onto my dolly (a garage-sale buy from long ago that’s more than paid for itself) and haul them into my listening room. 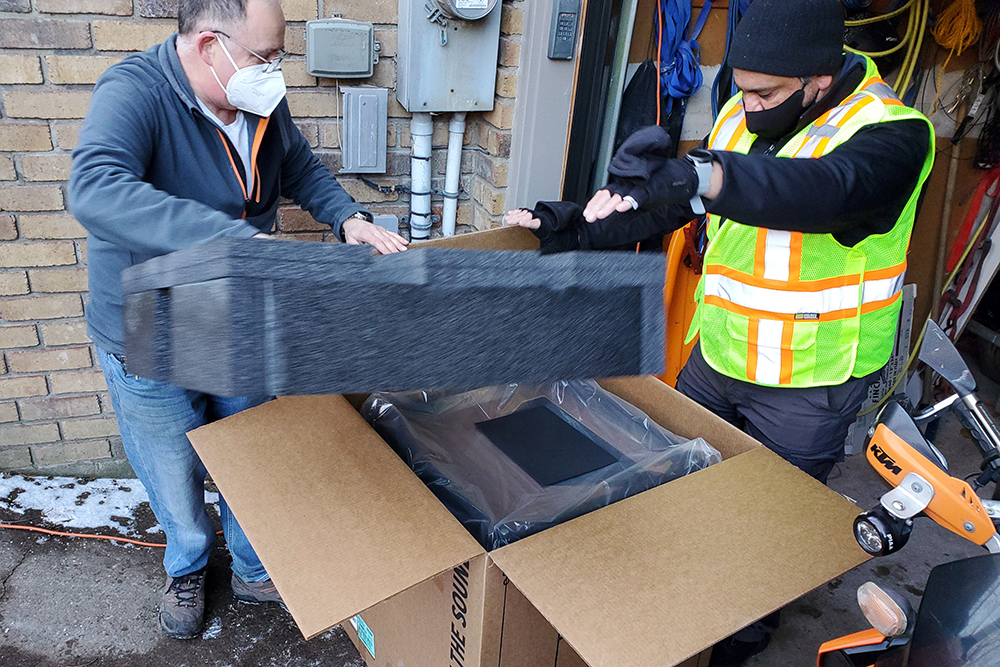 I’d made sufficient space to place the speakers in what I figured would be optimal positions, so that’s where we put them. The mid-high enclosure was moveable by hand, and Shaikh and I had no difficulties placing them onto the woofer enclosures and hooking up the jumper wires.

In all it was a fairly painless installation. Still, I had more work to do. My SVS PC13-Ultra subwoofer was still behind the right-side speaker, and that pushed it out too far into the room. My wife, Marcia, and I ended up moving the right speaker so that I could get the sub out and move it to the other side of the room. 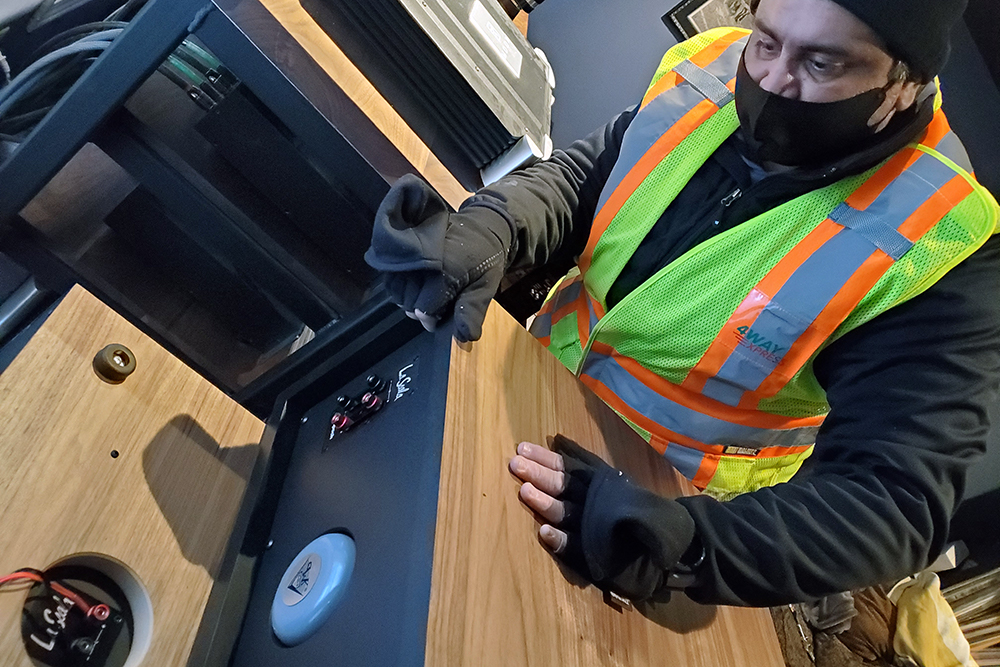 The La Scalas ended up fitting just fine, but with the required left-right spacing, I now can’t open the door to my back patio. That’s OK because (a) it’s winter, and (b) I can get to the deck via stairs from the patio above.

My daughter, Toni, found the wide, flat tops of the speakers irresistible. She proceeded to pull antiques and tchotchkes off other shelves and arrange them atop the La Scalas. Antiques on top of a speaker design that’s nearly an antique itself. How appropriate, I thought. 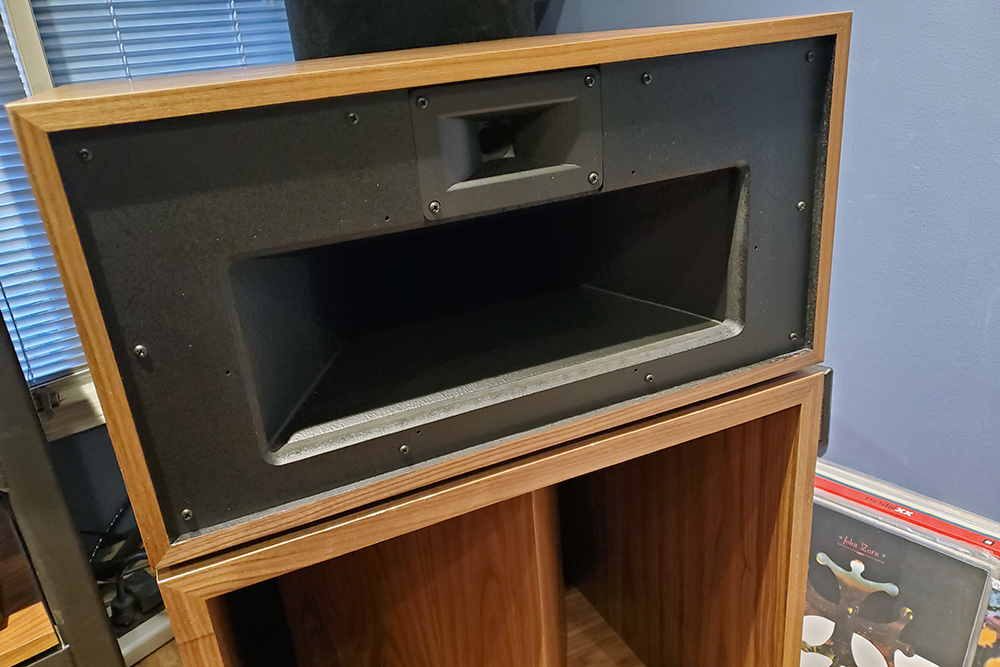 So now they’re in, and I’m in the process of figuring out how to make them sing. I’m starting off with the Simaudio 860A v2 because, well, it’s still in the system, and what the hell—why not push a 105dB speaker with a 225Wpc amp. It’s neutral, though, so maybe it’s not that crazy of an idea. I’ll get to some smaller tube amps—the natural genetic match for the La Scalas—later in the review period. 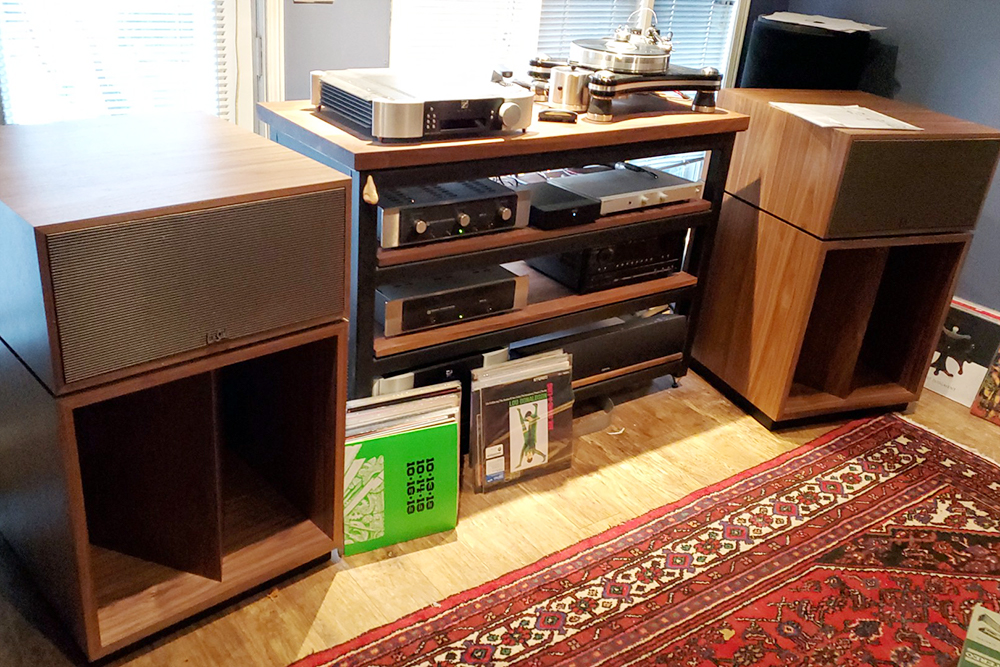 I live in a townhouse, and I respect my neighbors—at least the ones to the south. The ones to the north are pricks. I’ve sometimes looked out the window and seen an empty driveway to my right, so I’ve pulled the trigger a few times, and sweet blue Jesus, do these things go loud in an absolute effortless fashion. Far be it from me to give away the details of the forthcoming review, but I will say right off the bat that these speakers are a hill of fun.