SoundStage! isn’t my only side hustle. Through the spring, summer, and fall here in Toronto, Ontario, Canada, I also moonlight as senior editor of Inside Motorcycles, a Canadian print magazine. My duties at IM mirror those here at SoundStage!—I test stuff and write about it. I test motorcycles, helmets, clothing, and parts, and I write touring travel articles. But mostly I test motorcycles.

And I test all sorts of motorcycles. From hunched-over, dog-humping-a-football sport bikes that can top out at 93mph in first gear to long-range touring bikes, sensible little commuters, dirt-oriented dual-sports, and big-ass adventure motorcycles. Every year in recent memory, it seems, I’ve tested a Harley-Davidson motorcycle. While I’m not a fan of the Harley lifestyle (there are few things in life as sad as a middle-aged man wearing assless chaps), I do enjoy riding their full-size touring motorcycles. The smaller Harleys, such as the varying Sportster and Dyna models, have their appeal also, but the big bikes serve a specific, functional purpose—they can eat up long slices of road in comfort. 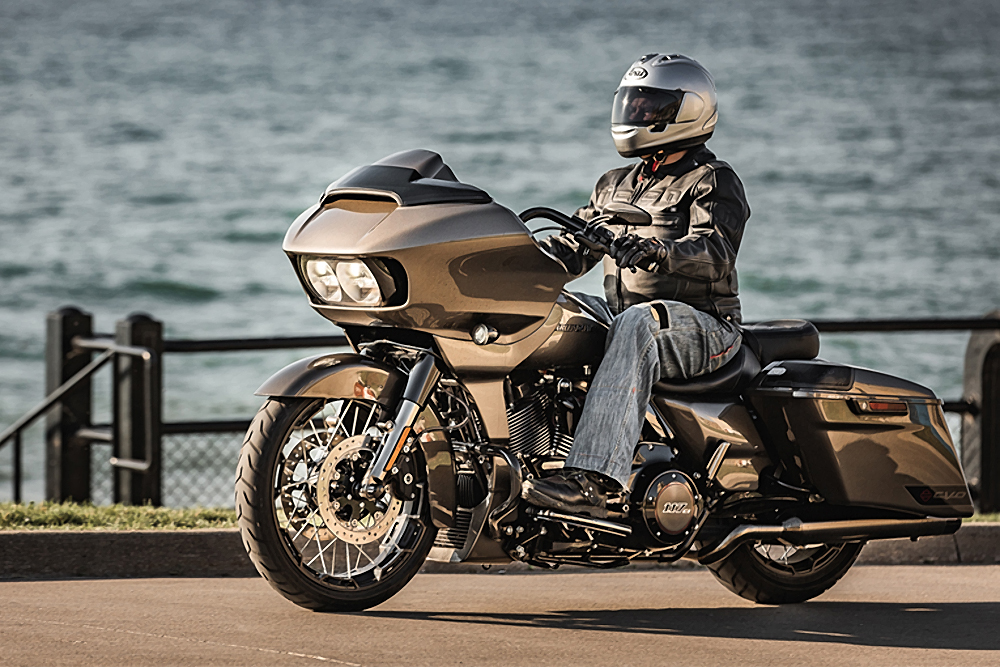 Just this past summer, I had the opportunity to evaluate the Harley-Davidson CVO Road Glide, which is right up near the top of the Harley line-up. The Custom Vehicle Operations models are a separate line, sort of like how there’s Toyota, and there’s also Lexus—the CVOs are, in a way, built to a higher standard than the models below them. CVOs have more powerful motors, more accessories, and a boatload more chrome. The underlying motorcycle is the same, the finishes are similar, but the CVO version is a much more impressive bike. With that impressive bike comes an impressive price tag—$41,399 (all prices in USD), which is substantially more than the base Road King, which retails for $22,249.

And here’s the hook to SoundStage!: this CVO Road Glide features a stereo system built in cooperation with Rockford Fosgate, the venerable automotive audio manufacturer. I’ve owned Rockford Fosgate amplifiers in the past, and they were serious amps that could handle difficult speaker loads and were truly overbuilt. For the Harley-Davidson Audio powered by Rockford Fosgate system, as installed on the CVO Road Glide, the most notable feature was the oval speakers mounted face-up in the saddlebags. This configuration added even more nostalgia, given that the speakers evoked the old six-by-nines from my first car—a Pontiac Sunbird, God help me, with an actual (pre Rockford) Fosgate amplifier. Up front, the speakers are the upper-level Stage II versions, each with separate midrange and tweeter. The amplifier, mounted in one saddlebag, employs class-D topology, which provides high power without requiring a large, heavy power supply—perfect for use on a motorcycle. 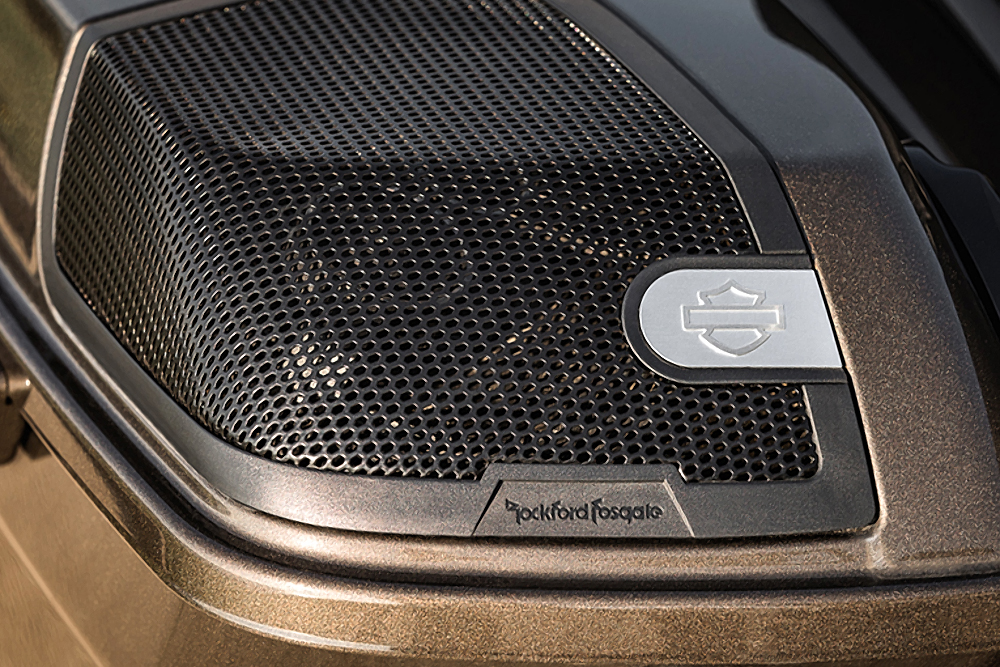 Harley specifies that each of the amplifier’s four channels delivers 50W into 4 ohms, or 100W into 2 ohms. This means that the amplifier can handle difficult speaker loads, although I’m not sure how relevant it is in this situation, given that amp and speakers are designed as a complete system with a known impedance. That said, this specification does give me reassurance that the amp is ruggedly built.

The audio system is controlled by a well-designed, extremely well-equipped infotainment system that can be accessed via the touchscreen or by thumb-actuated joysticks on the handlebar control pods. 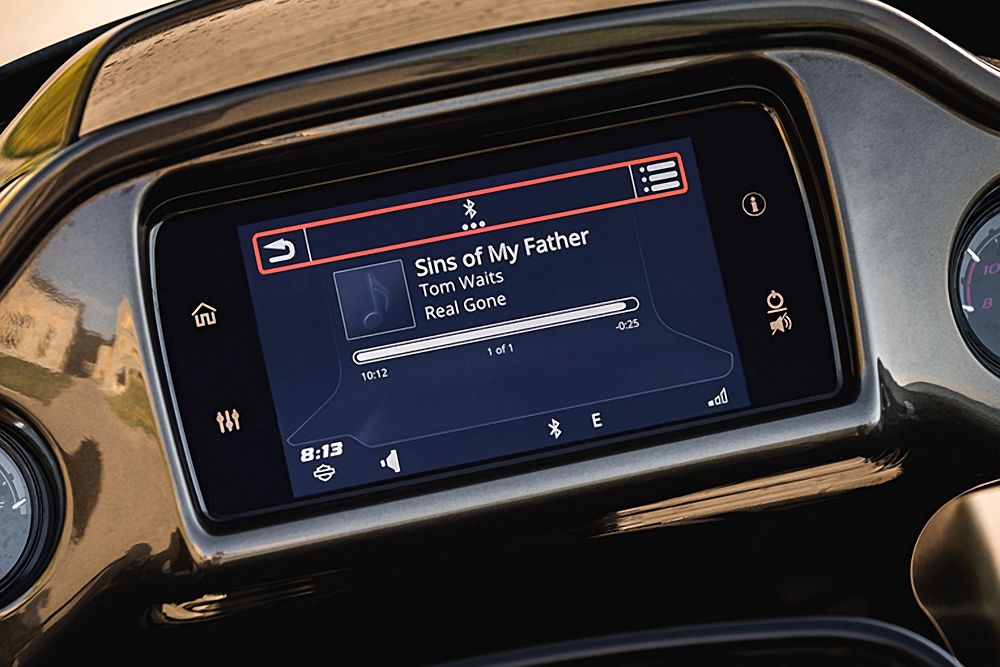 What should I listen to? By its very nature, listening to music aboard the CVO Road Glide is a participatory sport, given that everyone else within earshot is also listening. No way did I want to appear like a rolling cliché with “Born to Be Wild” or “Highway to Hell” blazing out of this thing. At first I cued up Duke Ellington’s Ellington Indigos on Tidal’s streaming service via Bluetooth from my phone, and it perfectly suited the CVO’s retro Ferris-wheel vibe. Later, after I felt more comfortable pissing people off, I swapped over to Tom Waits’s abrasive Real Gone, which was a more significant test of the system’s capabilities.

We need to talk about bass. Harley’s literature mentions “ground-thumping bass,” which makes me wince a little. As we’re all likely aware, for true high-fidelity sound, bass should be clean and unobtrusive. If it’s thumping, that generally means there’s a midbass hump that makes it seem like there’s more bass than there actually is. Also, real bass is exceptionally difficult to produce without some form of enclosure—a car interior or a room in a house. Without that reinforcement of low frequencies, it’s essentially impossible for speakers of this size to generate meaningful bass below about 100Hz. For example, the fundamental frequency of a low E on an electric bass is around 40Hz, and that fundamental frequency is pretty much missing in action on the CVO Road Glide. 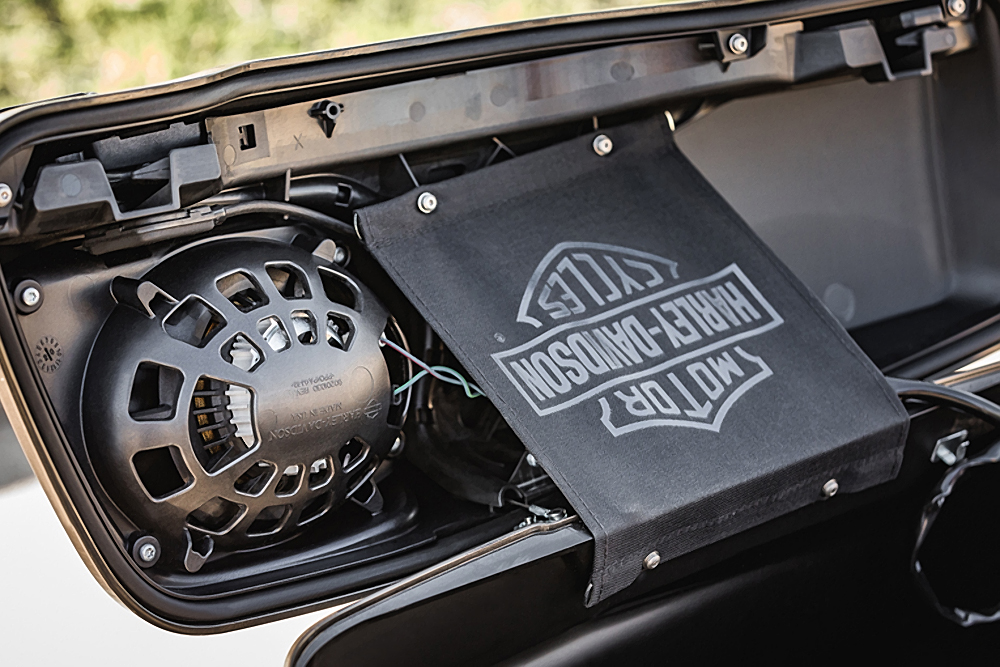 Before really cranking it on the road, I spent some time listening to Harley’s Rockford Fosgate system with both the engine and my helmet off, and sure enough, there’s not really any actual bass below about 100Hz, and the system feels like it’s been equalized to boost that frequency in order to give the impression there’s more low end than is actually present. Harley’s done a good job with that EQ though. The sound isn’t overtly boomy, and there’s still a good impression of kickdrum and acoustic bass. Up through the midrange, there’s a slight prominence, which gives electric guitars and female vocals a little boost. Another boost in the lower treble also helps give some additional presence to cymbals.

The combination of both front and rear speakers provides a slightly more encompassing acoustic, especially at sub-30mph speeds, but much over that, the benefits diminish quickly with the wind noise numbing out the rears and increasing reliance on the fronts.

What does this all mean? Well, the Rockford Fosgate system presents music as a little larger than life—and with good reason. I wear a full-face helmet, and that really muffles the hell out of the sound. Further, the system needs that added presence to cut through road and wind noise. 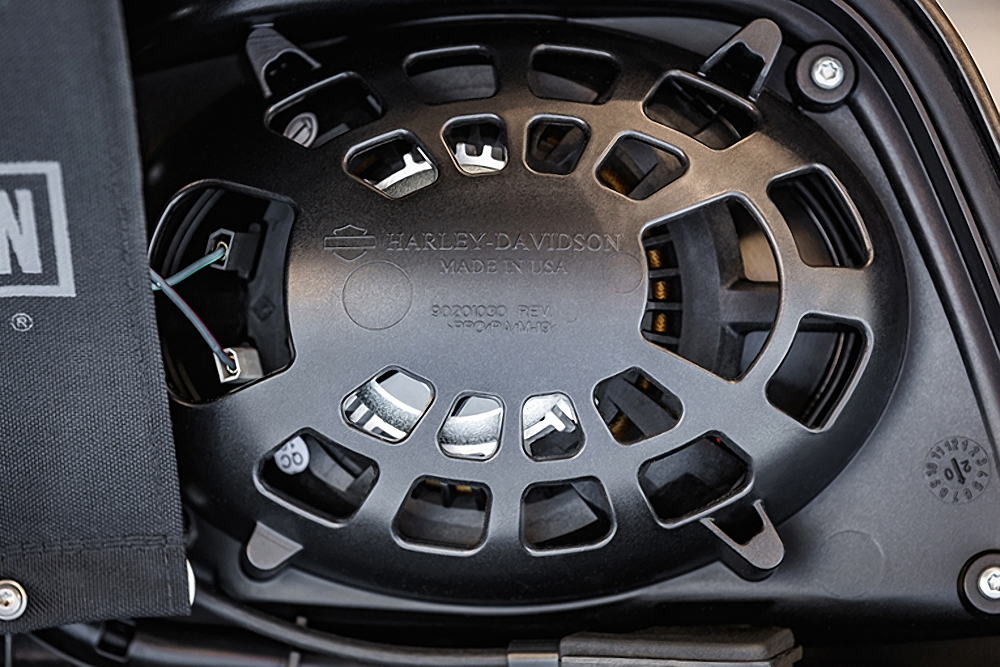 And cut through it does. The CVO’s stereo system sounds best at speeds below 50mph. Much above that, I found that in order to overcome wind noise, I had to turn the system up so loud that it just didn’t sound enjoyable. Not so much because the system was straining to accommodate the volume but more because this environment is already just so damn noisy that I became irritated in short order. Also, I had to crack the face shield on my Arai helmet to let in enough sound to make the whole thing worthwhile, and that got old real quick at highway speeds.

But tooling along country roads at around 50mph the Road Glide’s stereo did an admirable job of pushing out clear, well-modulated sound. I was able to focus on individual instruments, which were clearly articulated and utterly free of distortion. I often listen to music while riding via my Sena SMH-20 in-helmet audio system, and as I slash through country roads, I love to listen to Bill Frisell’s Nashville (CD, Nonesuch 7559-79415-2). The contrast between Frisell’s peaceful, evocative, almost gospel-like guitar and the sheer audacity of the extra-legal speeds at which I often travel makes me smile with my awareness of my own mortality and the stupid things I do that threaten to cut it short.

While the Road Glide isn’t conducive to at-the-limit cornering, it was absolutely perfect for a long, peaceful, loping ride in the Ontario countryside. With “Will Jesus Wash the Bloodstains from Your Hands” playing at a reasonable volume, I could easily picture myself riding in a bygone age on this motorcycle, which itself evokes a time before things got complicated. 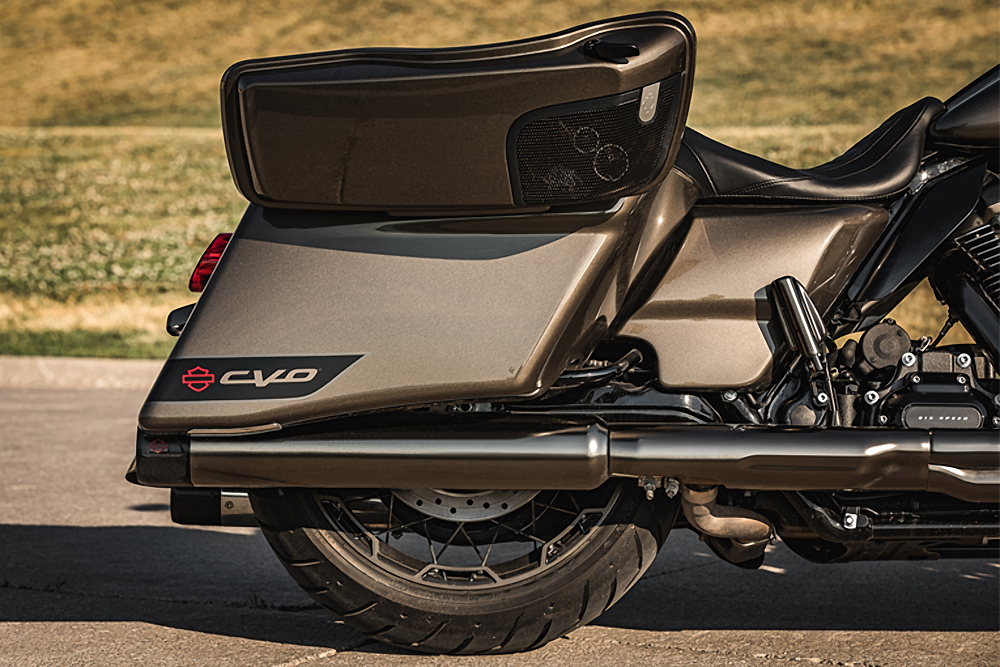 The Rockford Fosgate system took full advantage of its midrange bump, accentuating the attack of Frisell’s guitar and adding just a bit of extra sizzle to the higher notes. It’s silly at this point to go further into imaging, delineation of instruments, and soundstaging. There was none of that. What the CVO’s stereo system did give me, though, was a good impression of the music, a generalized feel of what was there, and the ability to interact with it in a way that isn’t possible via headphones or a built-in helmet communicator. Listening to music that originates outside of the helmet, in the environment through which I was passing, was a different, pleasant experience.

I suppose it’s important to put myself in the position of the typical purchaser of a motorcycle such as this. That rider would most likely be wearing an open-face helmet, possibly of the pudding-basin variety that leaves the ears exposed. In that situation, the CVO’s stereo—heck, any stereo—would have an easier time of it, as it would still have to fight the wind noise, but the helmet wouldn’t pose an additional barrier. But given my strong preference for not having to be fed by a bent spoon, I was utterly unwilling to take this risk, even for a short spin.

Further, the prospective buyer of the CVO Road Glide needs to be OK with attracting attention in a way that’s a little foreign to me. While I was happy to blast some music while riding about town, I was always acutely aware that people were most likely judging me, and yeah, it’s kind of childish inflicting my own musical choices on the public at large. I recall doing this in my early 20s with some of my louder car stereo systems, but I did, for the most part, grow out of that behavior. And in a car, you can always roll up the windows and crank the shit out of the stereo without bothering other people that much. You don’t really have that option on a motorcycle. 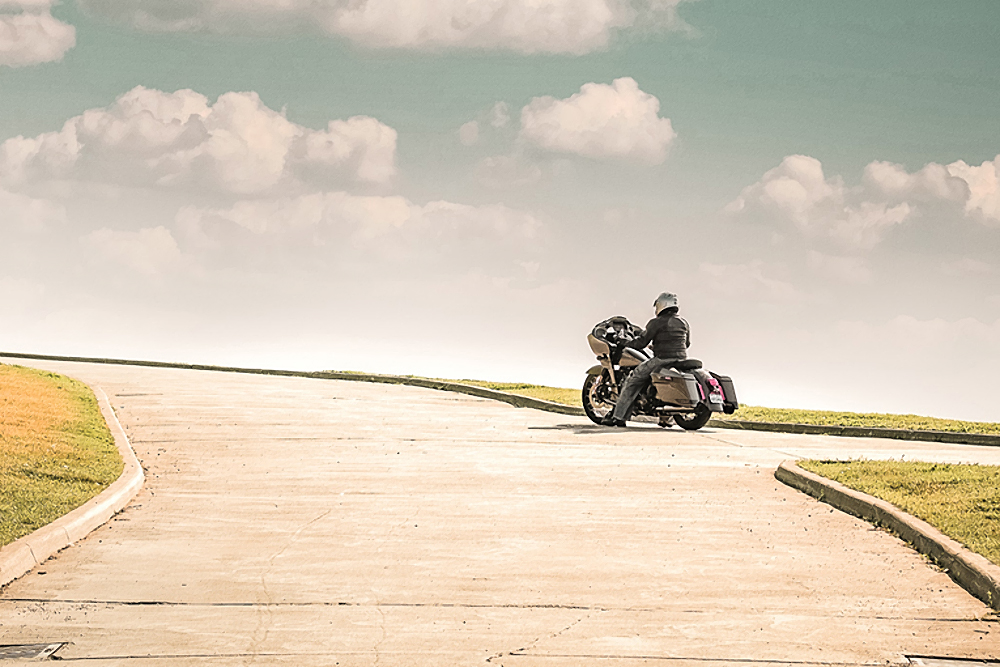 But that said, you don’t have to crank it that loud. Around town I found myself playing Chopin’s nocturnes, Bach’s solo cello suites, and the like at low volumes, and only pulling the trigger on the highways or in the country. And when I did that, I could easily get used to this bike, with this stereo.

I haven’t spent any time here talking about the riding experience, about how the CVO Road Glide functions as a motorcycle, but I’ll let you know right now that it’s a pleasure to ride. If I could own six motorcycles (I’ve thought about this a lot), one of them would certainly be a big CVO. The CVO Road Glide, with its Harley-Davidson Audio powered by Rockford Fosgate stereo system, is a nice place to visit, and I could see that it could also be nice to live there.

All photos supplied by Ben Quinn.