On December 6, 2018, audiophiles and hipsters gathered to attend a 1970s-themed audition of Gershman Acoustics’ Posh flagship speaker ($129,000 USD per pair) combined with an exhibition of the work of renowned artist Michael Arthur at Adirondack Audio & Video’s HiFi Loft, owned in part by Jason Tavares and located in the fashionable Williamsburg section of Brooklyn, New York. The evening featured the playback of two iconic ’70s LPs: Marvin Gaye’s What’s Going On and Sly & The Family Stone’s There’s a Riot Goin’ On. 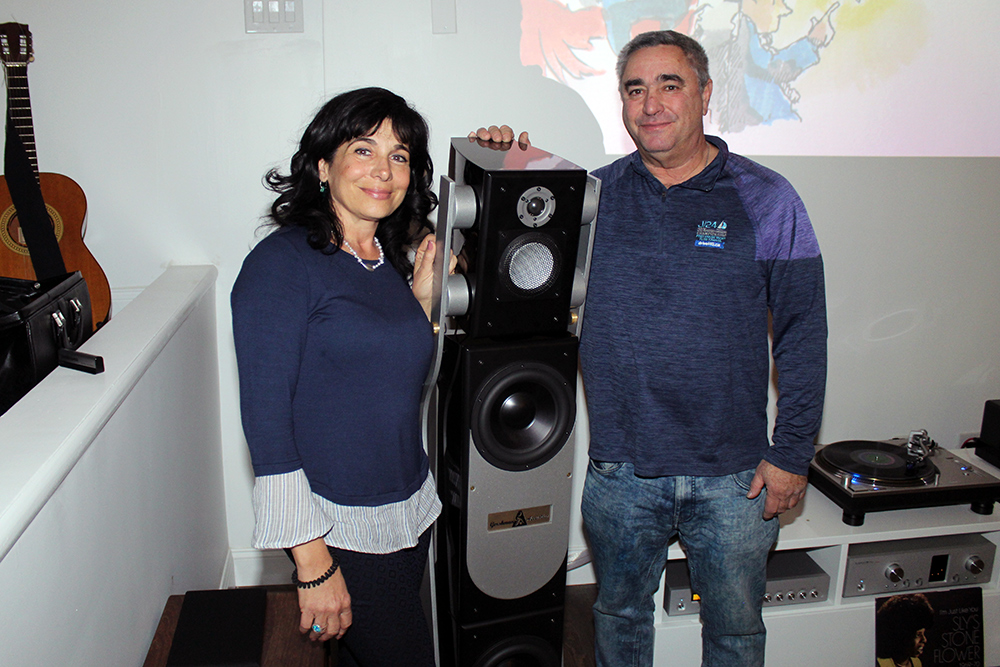 Present for the event from Canada’s Gershman Acoustics was the husband-and-wife team of Eli and Ofra Gershman, the company’s chief designer and the director of international sales and marketing, respectively. Also in attendance was artist Michael Arthur, who treated the crowd to a musically inspired, psychedelic “live drawing” that was projected onto the wall behind the stereo system as it was being created and as the music was playing. Michael’s drawings have appeared in, among other media outlets, Vanity Fair, The New York Times, The New Yorker, and NPR. 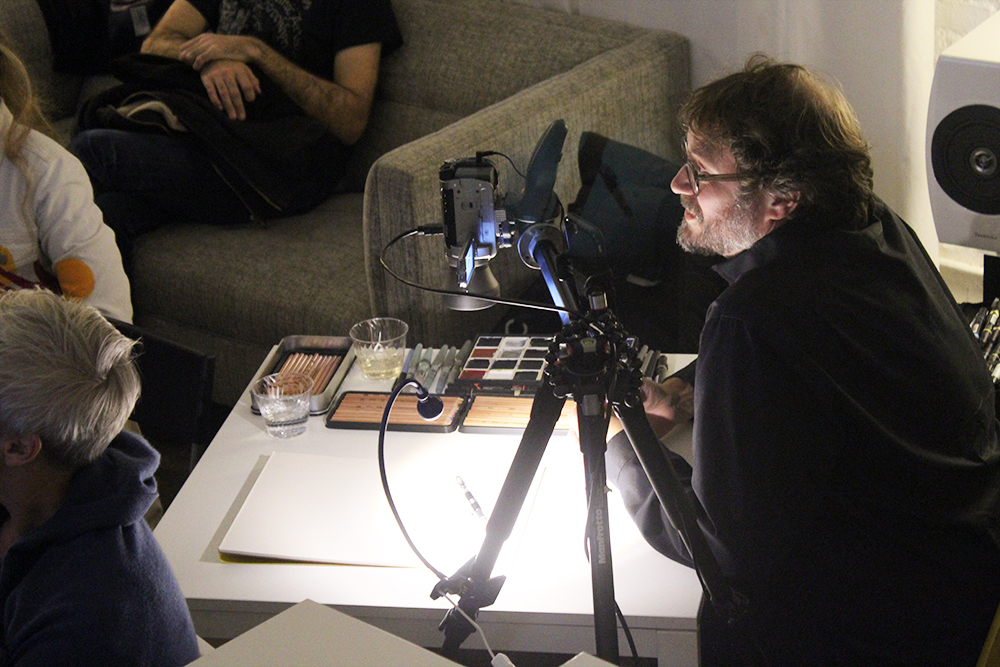 Greeting me at the door was Adirondack’s Jared Samuel, who was fully decked out in ’70s attire. After a reception, Ofra Gershman officially kicked off the event by giving a presentation on the Posh. Although Ofra is charged with handling Gershman’s business and marketing efforts, she demonstrated great facility with the Posh’s technical aspects.

As Ofra explained, this modular speaker has two high-gloss-lacquered, sealed HDF wood enclosures, both tapered at their rears to minimize standing waves. The modules have 1"-thick walls and are internally braced by 1/4" stainless-steel panels. The enclosures are configured per Gershman’s proprietary Separate Sub Alignment System (SSAS) system, comprised of a striking A-shaped stainless-steel frame flanking the sides that allows the enclosures to be physically separated and their angles adjusted to account for the room and listening position. Ofra stated that the SSAS design allows the two enclosures to be time-aligned, thus causing more coherent sound. It also prevents woofer vibrations from interfering with the tweeter and midrange. With a combination of the enclosure’s vibration-resistant HDF construction material, internal steel braces, SSAS system, and standing-wave-reducing shapes, it’s apparent that Gershman takes vibration management very seriously for this loudspeaker. 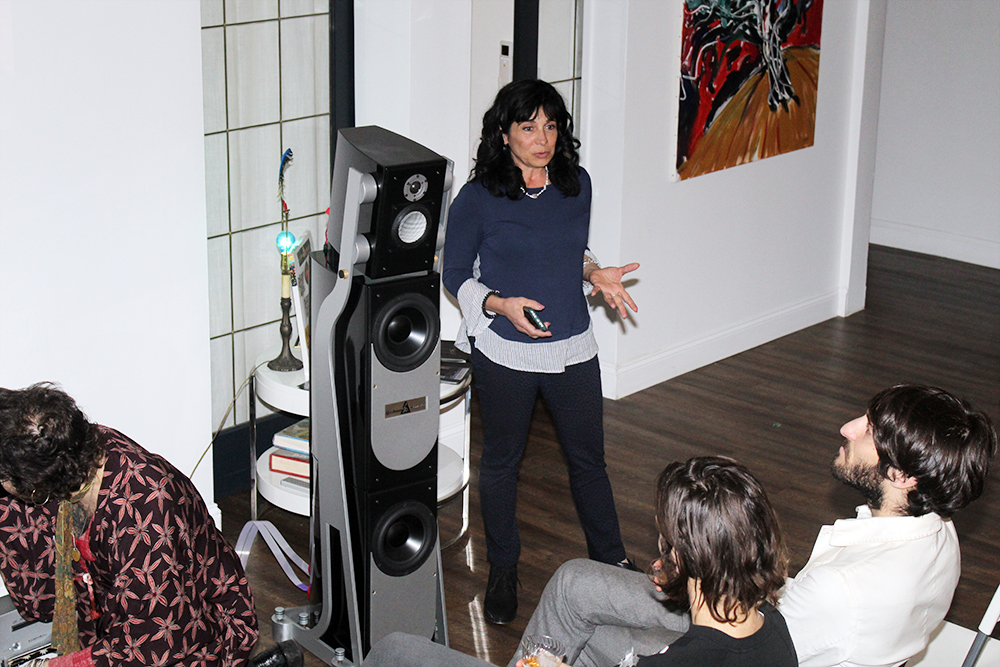 Aside from a pair of Posh speakers, the system used for the event consisted of Luxman’s C-700u solid-state preamplifier and EQ-500 tube phono stage, a pair of Bob Carver’s Raven 350 monoblock tube amplifiers, and a Technics SL-1200G turntable with an Ortofon cartridge. Signal cables and power cords were by Nordost and Kimber Kable, respectively. 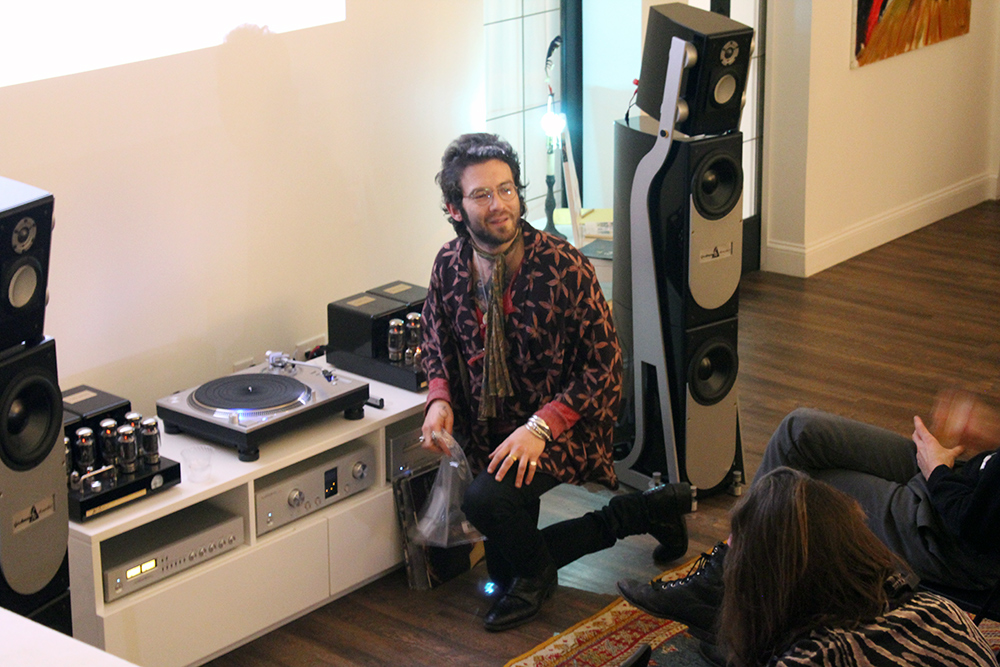 At the end of the presentation, Jared Samuel cued up the records. The stereo system had been warming up for many hours while sitting idle. However, it wasn’t until the second side of the first LP, What’s Going On, that the system really hit its stride. No doubt aided by all of the tubes and the analog source, the Poshes provided sweeping soundstages, gorgeously rich and organic midrange textures, and an overall sound that was detailed yet soothingly free and easy.

As if that weren’t enough, Michael Arthur’s real-time illustrations provided the perfect visual backdrop to the great music. Drawing in ink without the use of pencils or rough drafts, he manipulated the video projector to display onto the wall an ever-changing kaleidoscopic mosaic of funky and colorful images. Undoubtedly, his art, a live reaction to the moment, greatly contributed to the event. 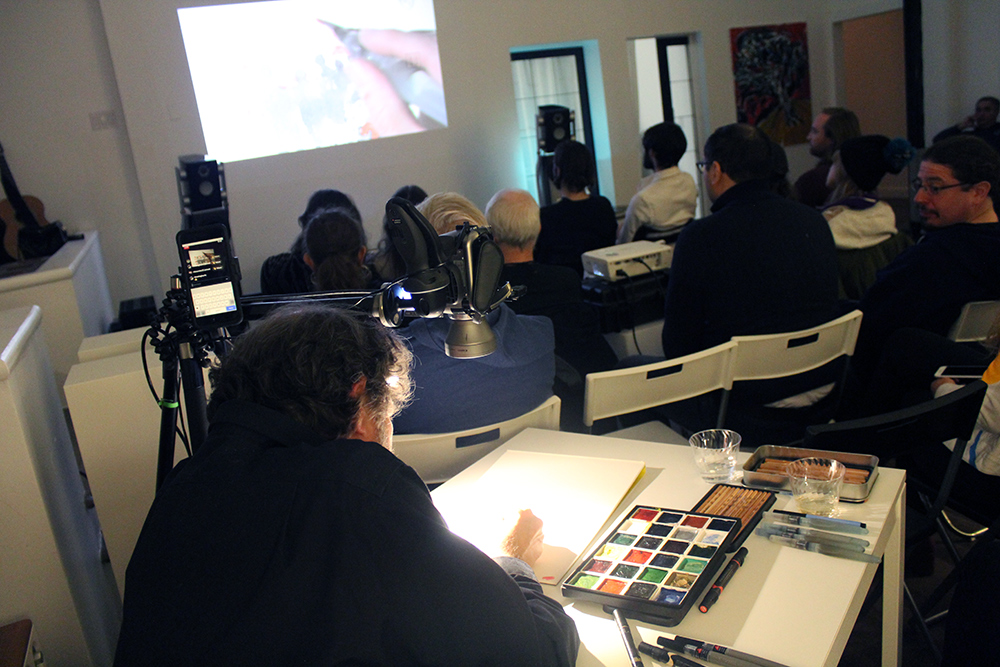 The photos of Arthur’s work that appear below are those that he created during the event. You can find other examples of his work at michaeldarthur.com or on Twitter and Instagram at @inklines. More information about the Posh speaker is available at gershmanacoustics.com. 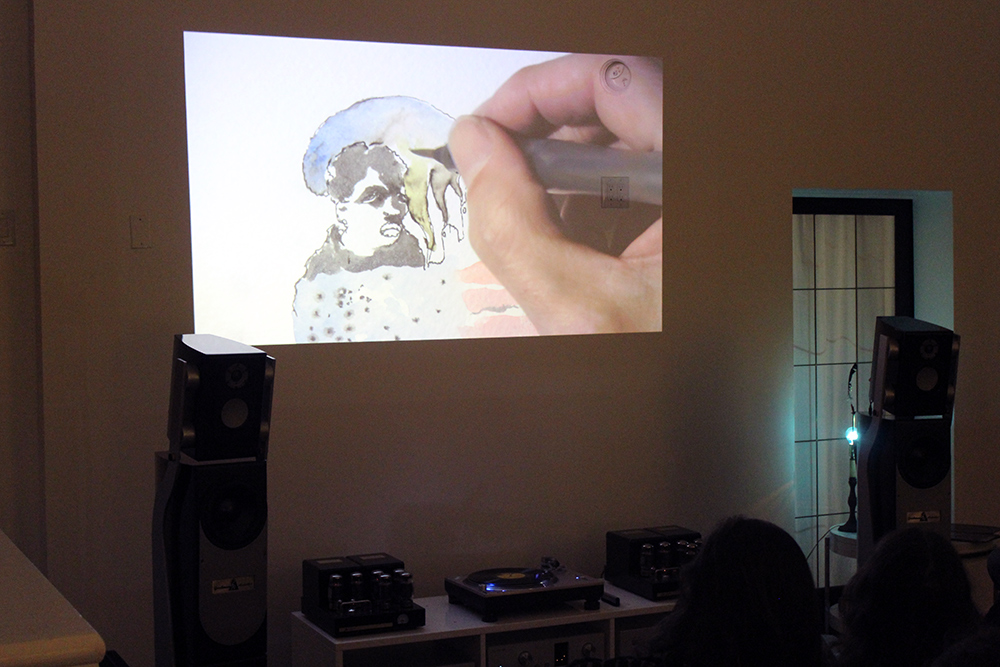 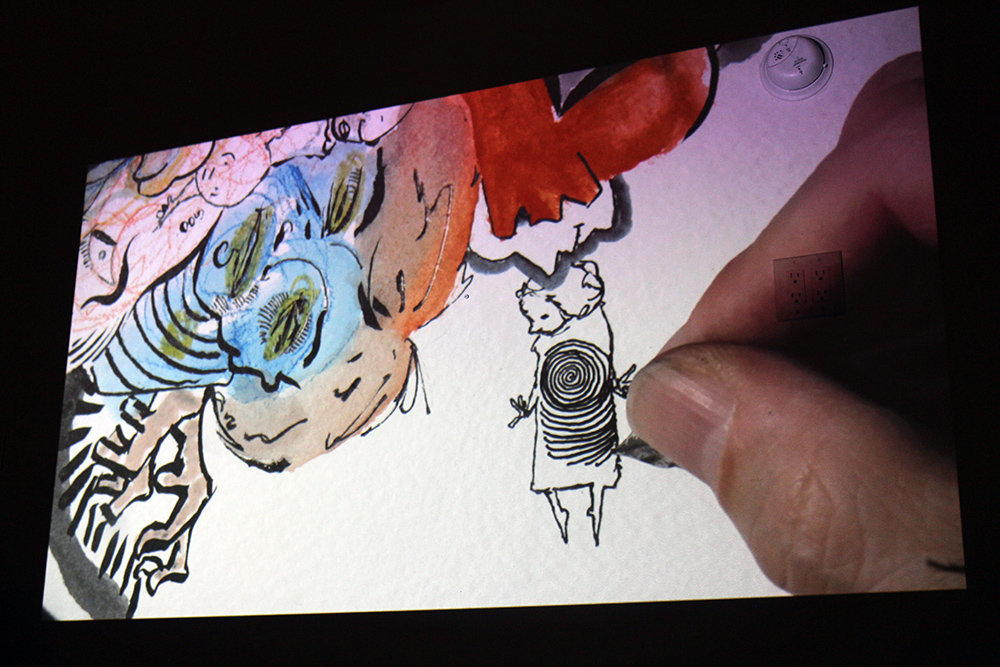 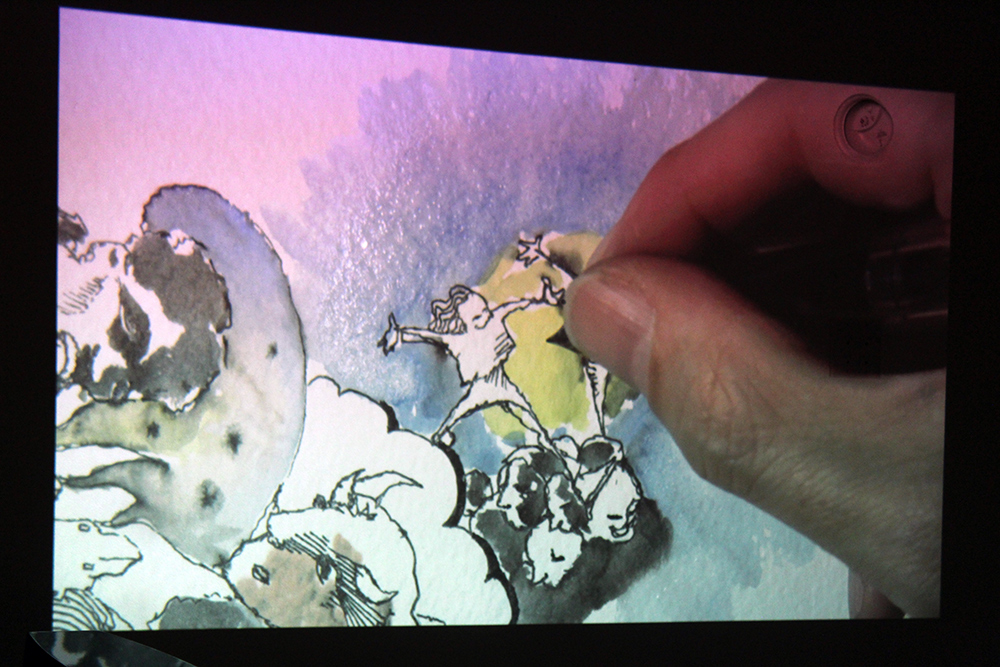 With its ’70s vibe and thoroughly modern audio gear, the evening represented not only one of the most enjoyable, innovative, and successful audio events I’ve attended, but one that drew a much-needed young and stylish crowd to the world of high-end audio. Kudos to both Jason Tavares and Jared Samuel for a job well done.