On December 7, 2018, I traveled to DeVore Fidelity’s “Monkeyhaus” factory and listening room, located in New York’s Brooklyn Navy Yard, to attend a party hosted by DeVore for two independent audiophile-approved jazz record labels: Newvelle Records and Greenleaf Music. According to the invite, the party offered “high-end pizza, wine and spirits, and a special selection of vinyl on some very beautiful speakers.” Present were John DeVore, the company’s chief designer and owner, and many of his employees, distributors, and other partners, as well as the founders of these two labels and many of their recording artists. 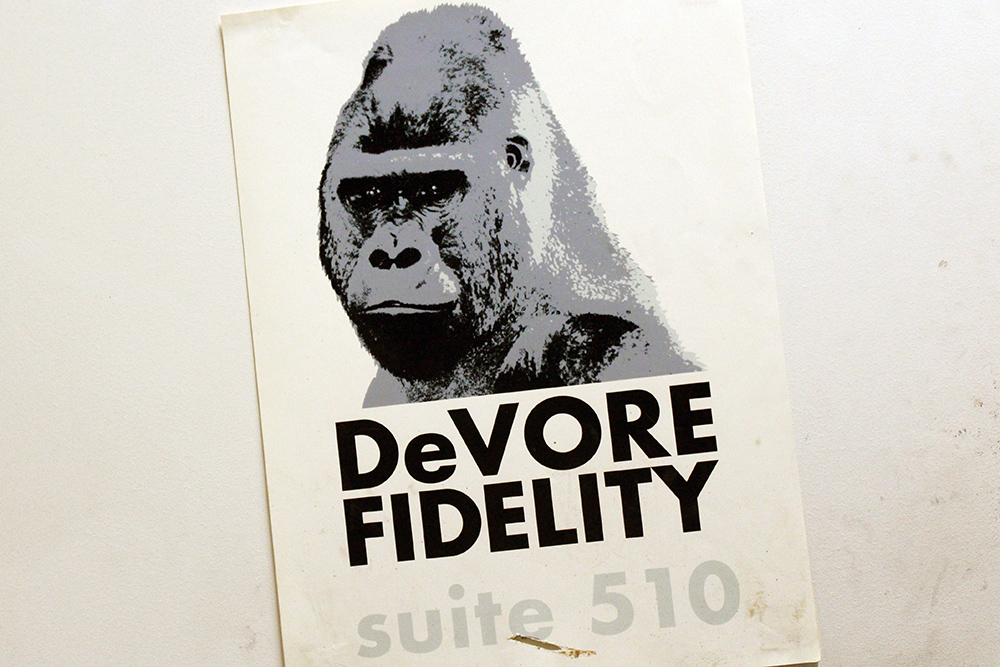 Those familiar with DeVore Fidelity know that the company makes highly efficient, musical-sounding, easy-to-drive speakers that are devoid of flash, gimmicks, and, well, nonsense -- except for maybe the names, which I’ll get to. Unsurprisingly, they are often matched with low-powered tube amplifiers. In homage to John’s uncle, Irven DeVore, a noted primatologist and anthropologist, John names his company’s products after apes. Indeed, both uncle and nephew appear to be infatuated with these anthropoid primates.

Newvelle Records is subscription-based. Its members periodically receive limited-run vinyl pressings from its artists, complete with gorgeous cover art and informative literature. Greenleaf Music has a subscription service, but also sells individual albums via downloadable files, CDs, and LPs. Both labels pride themselves on creating records that do not cut corners, either sonically or artistically. Newvelle, for example, makes liberal use of vintage and tube microphones and preamps, as well as analog mixing consoles. Also, both companies state that their business model is economically fair to artists. 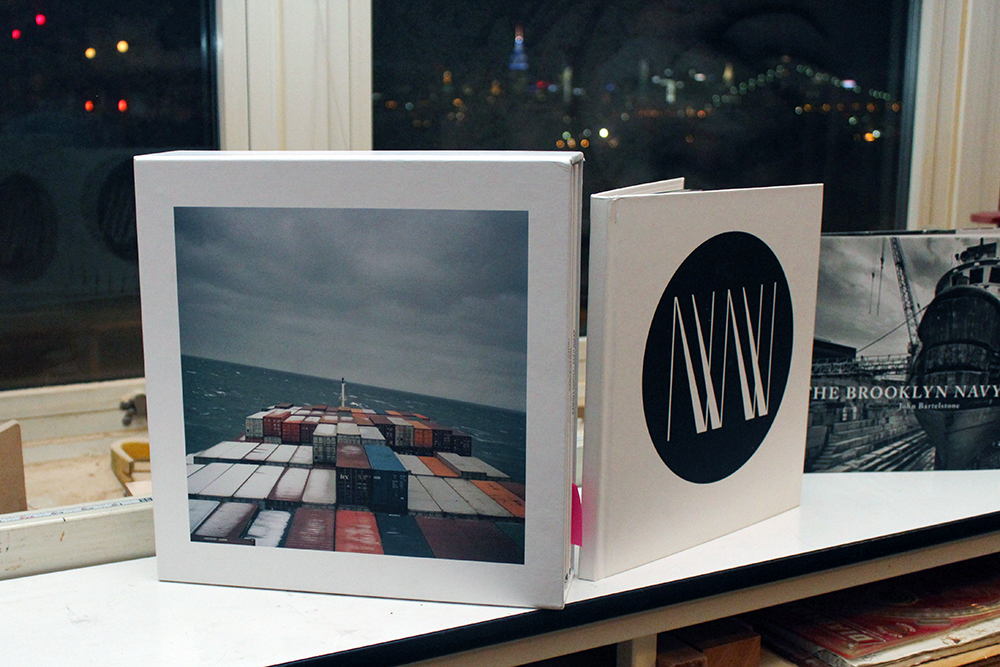 After leaving my home for the Monkeyhaus, I learned that although the 225-acre Brooklyn Navy Yard is just across the East River from Manhattan, where I live, it is located in an area of Brooklyn that is extremely isolated and difficult to reach by public transportation. Dating back to 1801, the once highly active naval shipyard was deactivated as a military installation in 1966 and now houses an entertainment and artisanal-product-oriented commercial and industrial center.

But finding the Navy Yard did not mean that I had found the party. The cavernous building in which the Monkeyhaus is located was hard to find. Moreover, the building’s maze-like fifth floor, where I was told to go, was so large and desolate that I wondered if I would ever reach the pizza, find my way to an exit, or see another living human being. (Apparently, I am not the only one who has had difficulty reaching this haus.)

Thanks to guidance from a tenant who was heading to the street, I managed to find my destination, marked by a small sign with DeVore Fidelity’s name and the headshot of a gorilla. The party was held way in the factory’s rear, which explained why I couldn’t hear any noise from the hallway. Now stressed and tired, the first order of business was to get a well-deserved whiskey, despite the fact that I don’t normally drink alcohol. 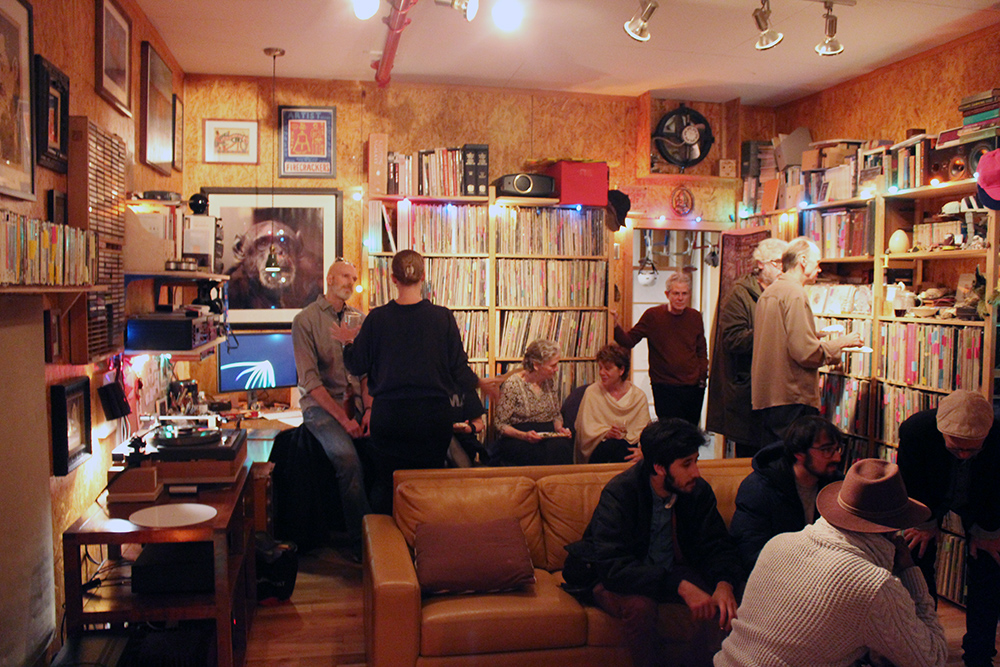 Looking around, I noticed that with one exception, the factory area where the party was held was used mainly for storage. Strewn about and often stacked to the ceiling were cabinets, footers, drivers, and other speaker parts. However, this area is also where DeVore Fidelity has its listening room, a den-like oasis of soft golden lights, wood finishes, and upscale Persian rugs amongst the unfinished factory floor.

I headed toward the listening room’s inviting glow, where over the course of the evening Newvelle’s and Greenleaf’s records (including some that have not yet been released) were played on a pair of DeVore’s relatively small and svelte-looking Gibbon Super Nine floorstanding speakers. Rated at 91dB sensitivity, the Super Nine is a 2.5-way speaker with a .75" textile-dome tweeter and two 7" paper-cone woofers. 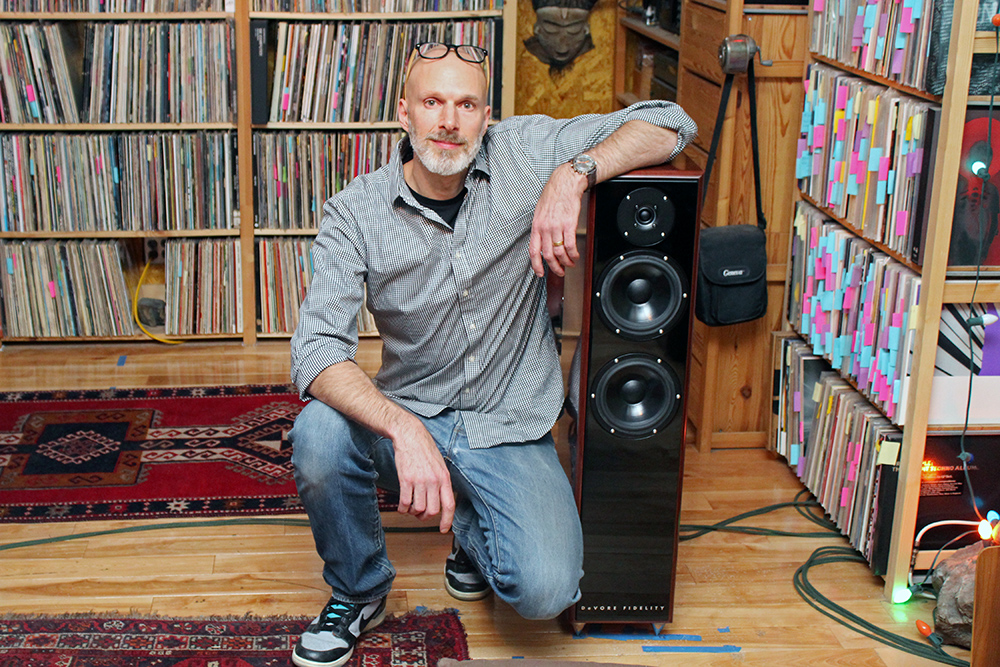 The Super Nines were driven by a renowned single-ended, solid-state amplifier, the 30Wpc Pass Labs Aleph 3, and they were fed by a gorgeous modified Garrard 401 1970s-vintage turntable. Also in the room were approximately 10,000 LPs and many reel-to-reel tapes, all neatly stored in large wood cabinets, as well as a large number of SET (single-ended triode) amplifiers; a Technics RS-1500 tape deck; a digital music server, which at one point was pressed into service; and numerous simian-themed paintings and artifacts. 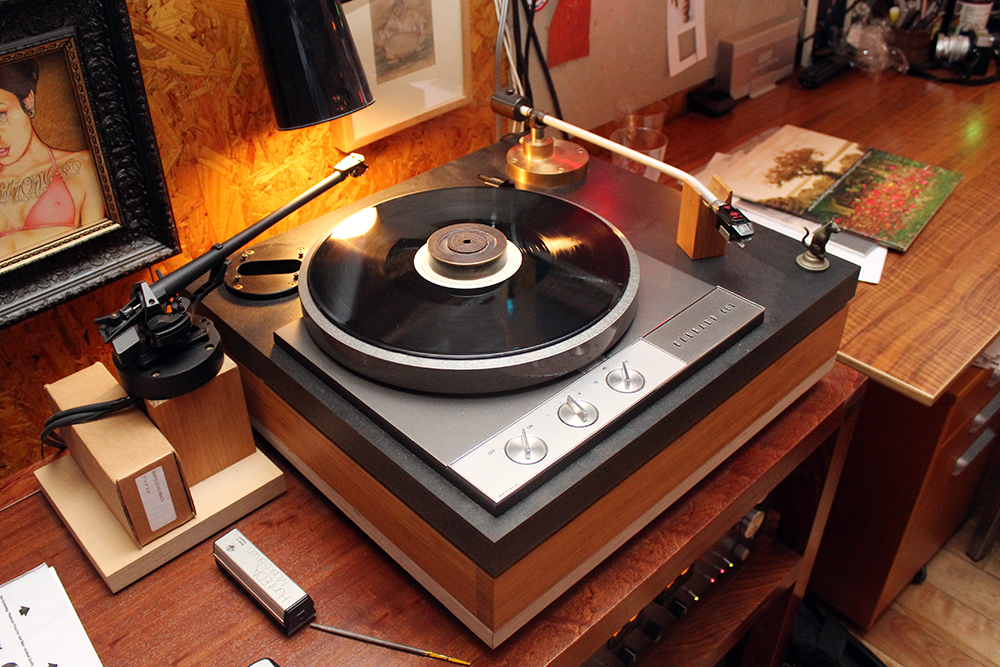 Due to the party’s noise and the fact that I was repeatedly pulled away to meet many of the guests, I was unable to critically listen. Still, aided by the whiskey and seeing some familiar faces among the crowd, my stress level had by then markedly decreased.

Making my way around the factory, I easily located John DeVore, who is about six and a half feet tall. He kindly introduced me to many of the labels’ artists and representatives, including one of Newvelle’s cofounders, pianist and composer Elan Mehler (who, at six foot seven, makes DeVore seem positively short), and Alex DeTurk, the label’s mastering engineer. I also briefly met Greenleaf’s founder, trumpeter and composer Dave Douglas. Douglas is one of the most lauded and prolific trumpet players in the world. 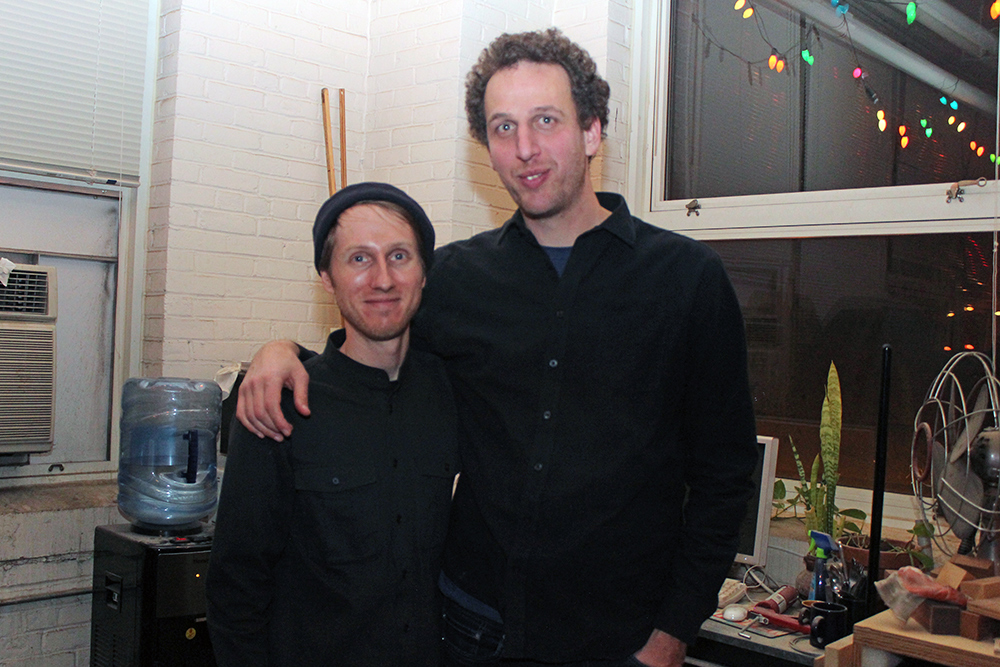 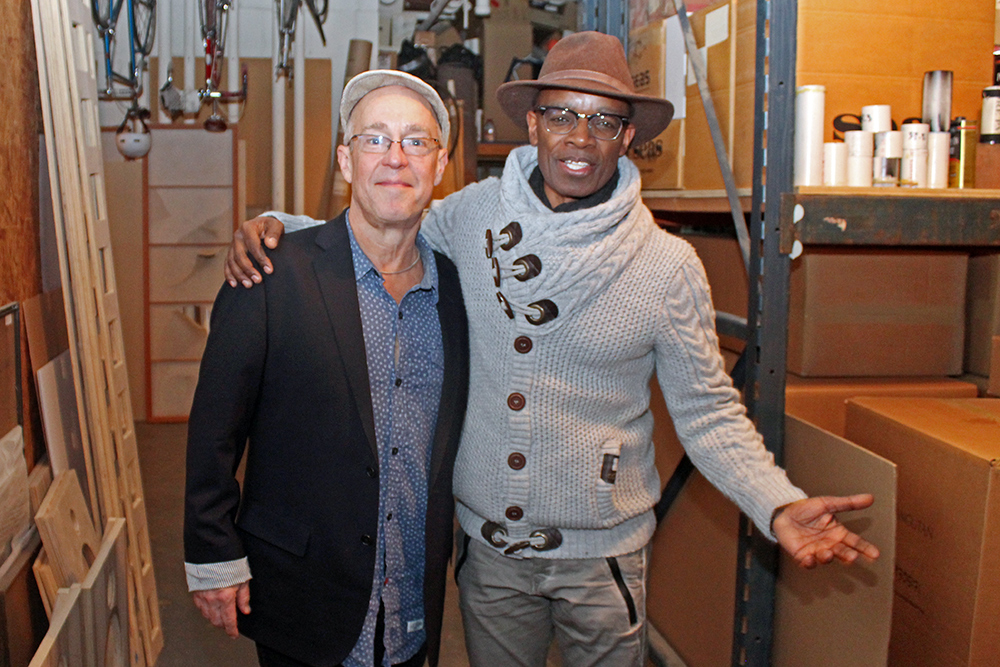 Speaking of artisanal, also at the party was Noriyasu Komuro, the legendary amplifier designer who is responsible for numerous exquisitely crafted SET amplifiers over the last 30-plus years. Although I snapped Komuro’s picture, which also includes DeVore and Stereophile’s Herb Reichert, I regrettably did not get to speak with him. Next time he won’t be so lucky, as I would like to pick his brain. 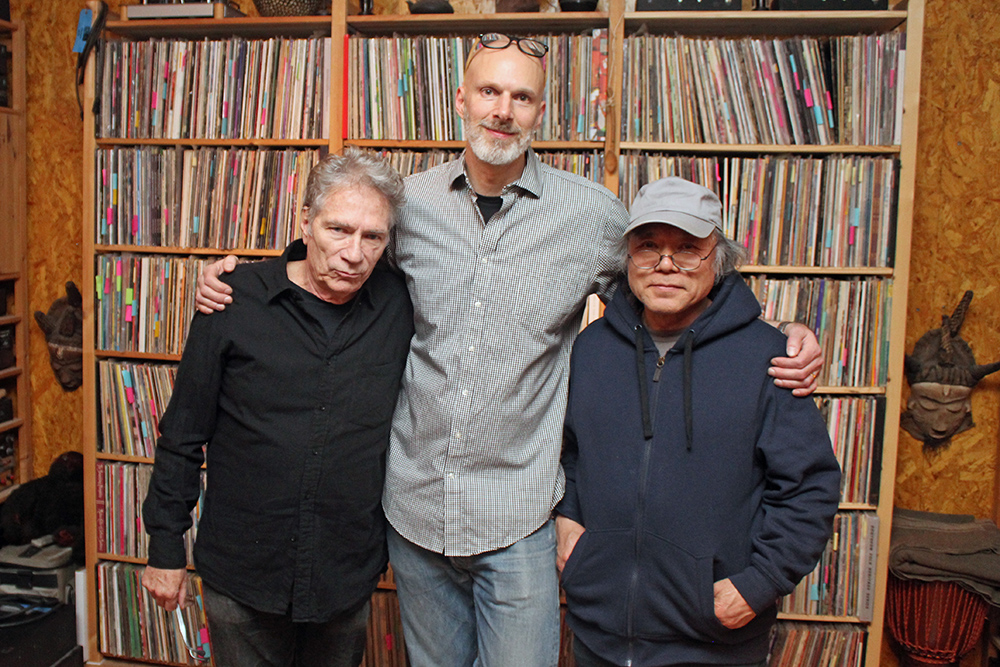 The evening was a fantastic opportunity to learn a bit more about DeVore Fidelity and mingle with audiophiles, record industry executives, and musicians. Stay tuned for more about DeVore. I have a personal tour of the Monkeyhaus listening room and factory scheduled soon, and I’ll provide a full report for this site.