January 31, 2019 -- it was on the coldest of winter mornings that I arrived at Flux Studios on New York City’s trendy Lower East Side to audition Q Acoustics’ Concept 300 speaker ($4499.99 USD per pair with stands). This British audio company made a bit of a splash with its entry-level 3000i-series speakers, which had the reputation for providing great sound and high value. The prospect of seeing what the company could do further up the price chain was intriguing enough to get me out of bed early. 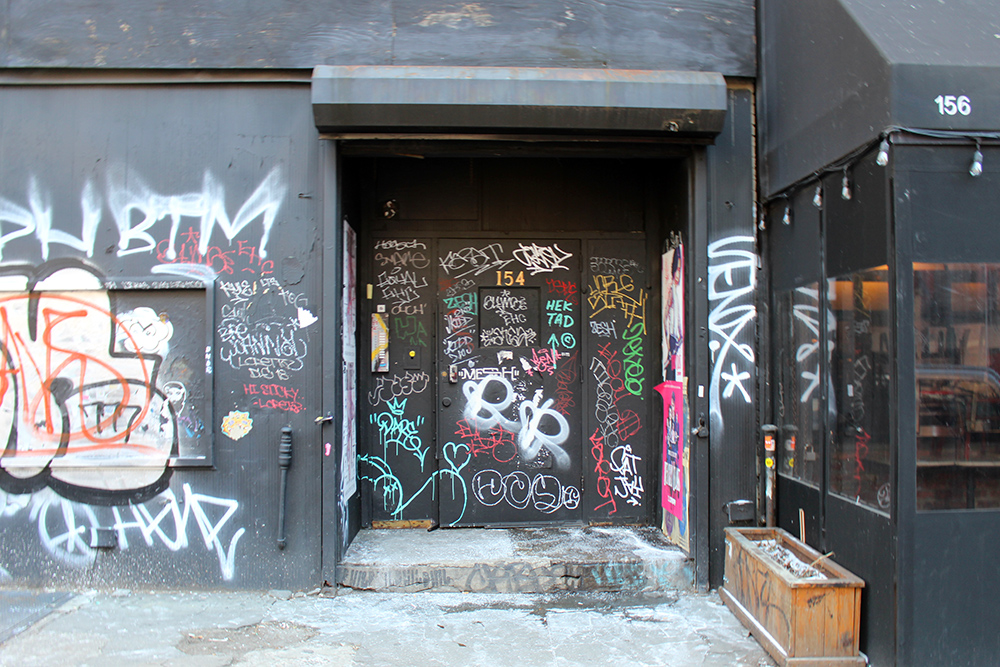 With Flux’s signless entrance entirely obscured by graffiti and divulging no indications of life, the building seemed long ago abandoned, if not condemned. In no mood to remain in the cold, I assured myself that I had the right place. I managed to find an intercom, whose tenant list thankfully included Flux’s name. Once buzzed in, I waited in the lobby’s relative warmth to be brought upstairs in the vintage, timeworn elevator.

At my floor, I was warmly greeted by Jonathan Bennett, Q Acoustics’ marketing director, and several members of the company’s public relations firm. Flux’s clients include Chance the Rapper, David Crosby, Sean Lennon, Jennifer Lopez, and numerous other artists. During introductions, I browsed the music industry artifacts (photos, guitars, and a Jimi Hendrix clock) that adorned the space. 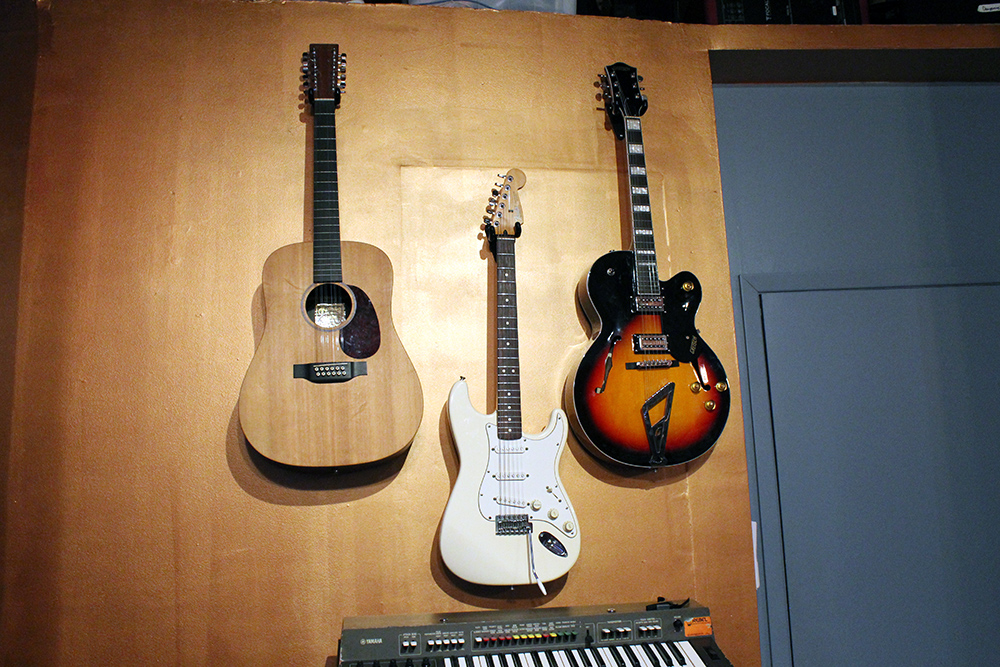 We then entered one of the studio rooms, where a pair of the Concept 300 speakers awaited audition. Before the music began, I spoke with my hosts and learned that Q Acoustics, which sells direct to consumer, was started in 2006 by a group of experienced engineers who had previously worked at companies such as KEF and Tannoy. 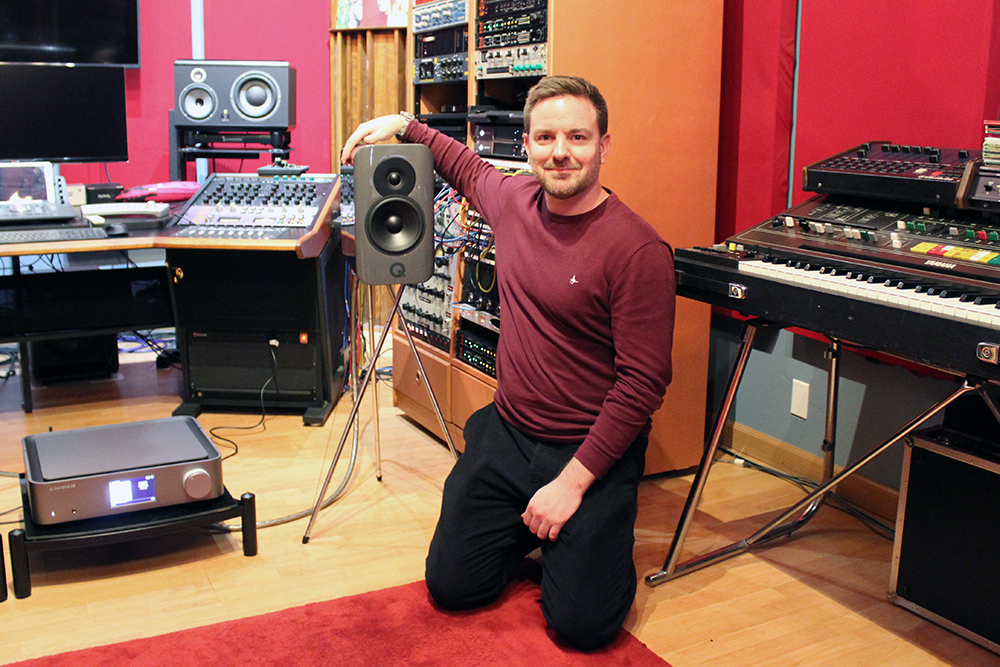 Jonathan Bennett with the Concept 300

Discussing the Concept 300, I learned that it is the baby brother of Q Acoustics’ top-of-the-line Concept 500 speaker ($5999.99 USD per pair), a two-way, three-driver floorstander. Two-way and ported, the 32-pound Concept 300 speaker features the same drivers as the floorstanding Concept 500, though only two of them in total: a 6.5" impregnated-paper cone midrange-bass drive unit and a 1.1" soft-dome tweeter. The 300 is rated at 84dB/W/m sensitivity. 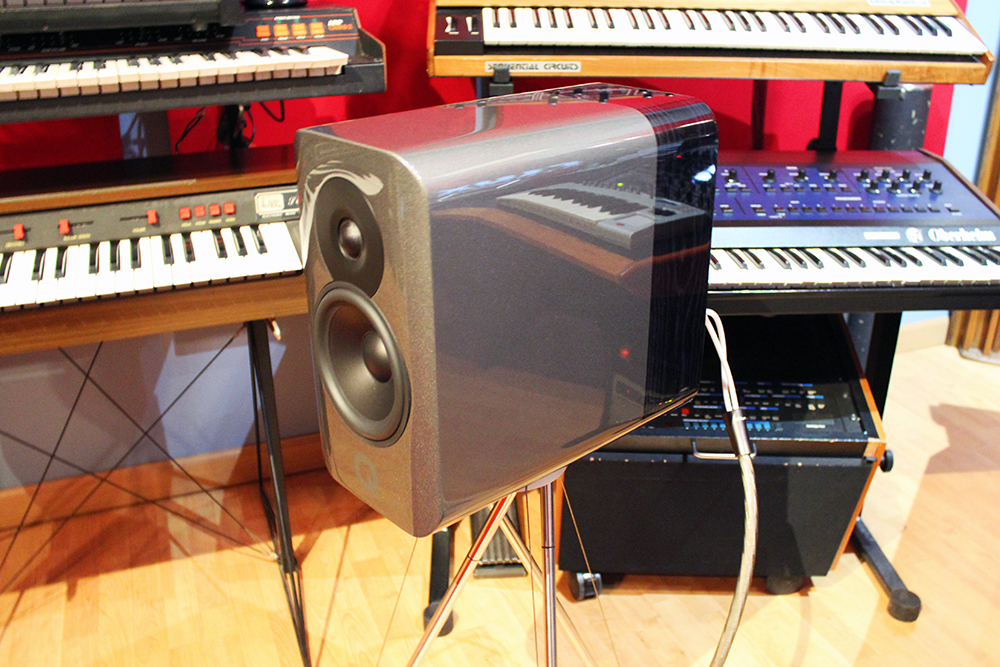 The Concept 300 uses numerous interesting technologies -- too many to address here. However, like the Concept 500, for the 300 they include a proprietary Dual Gelcore cabinet whose walls are composed of three layers of MDF that are pressure-filled with a gel that works to convert vibrations into heat. Further, the 300’s heavily braced cabinet is undergirded by an integrated baseplate, dubbed Isolation Base. This plate features a spring suspension system that rests on Sylodamp, a material that also converts vibrations into heat.

One other important technological highlight is the Concept 300’s patent-pending 14-pound-per-channel Tensegrity stand, which Q Acoustics considers an integral part of the speaker’s design. Using steel cables and three stainless-steel rods, the stand is optimized for the 300’s weight and has minimal contact with the speaker. 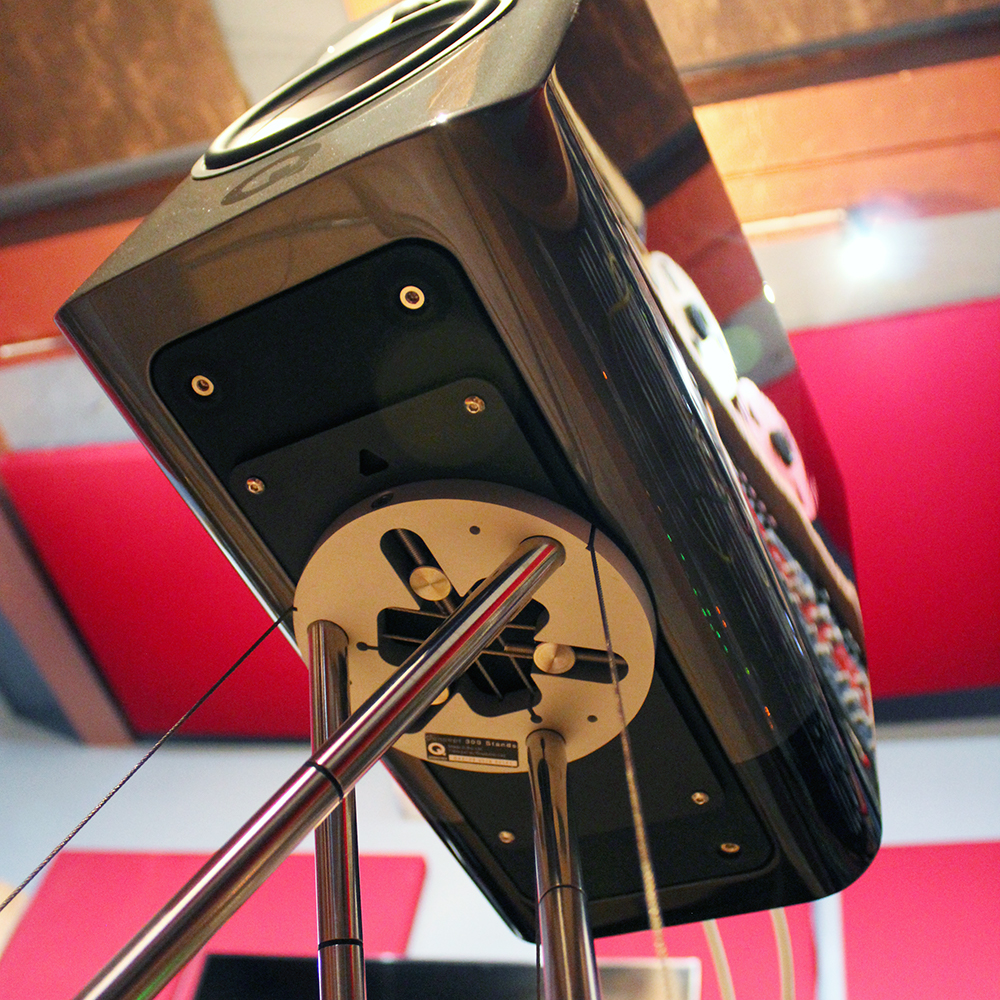 The principle of Tensegrity is not new, and it was used in a 1951 architectural exhibit at the Festival of Britain called Skylon. Pursuant to this principle, the rods, which do not touch each other, are in compression, and the cables, which hold the legs in the correct positions, are in tension. However, the system’s components are never subject to a bending force. This is said to manage unwanted vibrations by creating an inherently stable tripod support. Further, the stand’s design is claimed to minimize re-radiation of energy from the stand back to the speaker.

Q Acoustics’ speakers sport contemporary, minimalist design cues and eye-catching cabinets that are coated with multiple layers of high-gloss lacquer in a choice of three finishes: Black + Rosewood, Silver + Ebony, and White + Oak. The pair of Silver + Ebony Concept 300s in the studio room looked sleek, modern, and of impeccable build quality. Their cabinets, with their lacquer finishes, were indeed gorgeous.

Now time for the audition. I took account of the playback system’s electronics: Cambridge Audio’s Edge W amplifier ($3000) and NQ preamp and network player ($4000). Connecting everything were QED’s flagship Signature Supremus interconnects and speaker cables, each $195 per meter. (QED and Q Acoustics are owned by the same parent corporation.) All told, the system’s total cost was approximately $12,500. 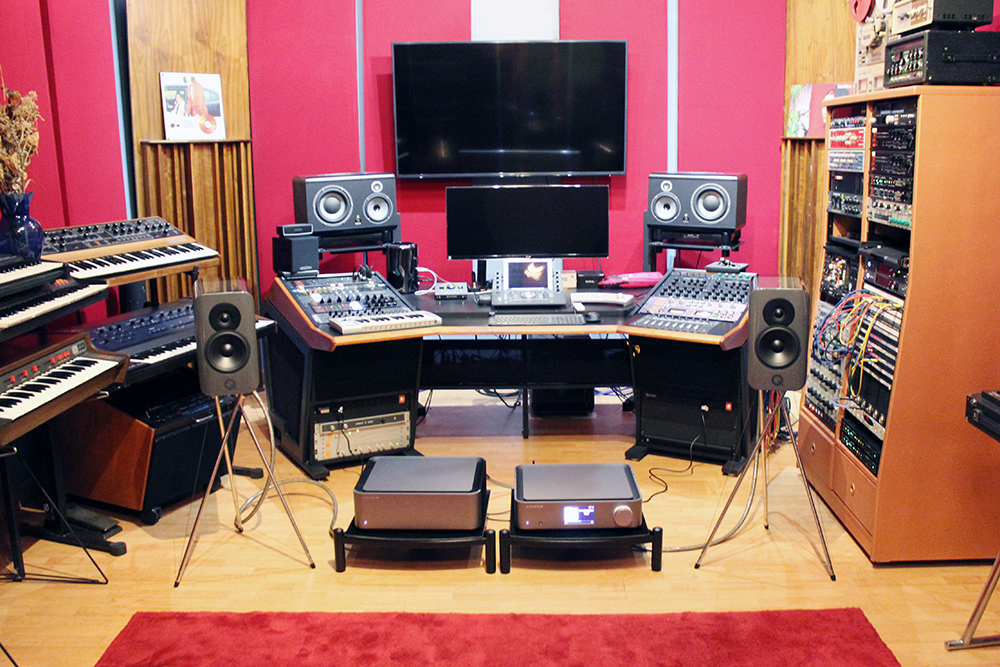 After a few songs streamed through Tidal, I was a bit taken aback by the Concept 300’s performance. Imaging, clarity, and delicacy were impressive, and on Kamasi Washington’s “Clair de Lune,” a reinvention of Debussy’s piano classic from The Epic (16-bit/44.1kHz FLAC, Brainfeeder/Tidal), Washington’s tenor saxophone bristled with emotion. Miles Mosley’s bass lines were clean and crisp, and Cameron Graves’s piano notes had very respectable weight for stand-mounted speakers.

Obviously, the studio room, while a very cool place to hang out, was designed primarily as a place to record music. The many large abortive treatments on the room’s ceiling and walls dampened the Concept 300’s sound, favoring precision and focus over openness. But even in this imperfect environment, soundstage size was by no means slighted. The audition left me wondering what the Concept 300 could do in a slightly more reflective room and with other source components, particularly a turntable. 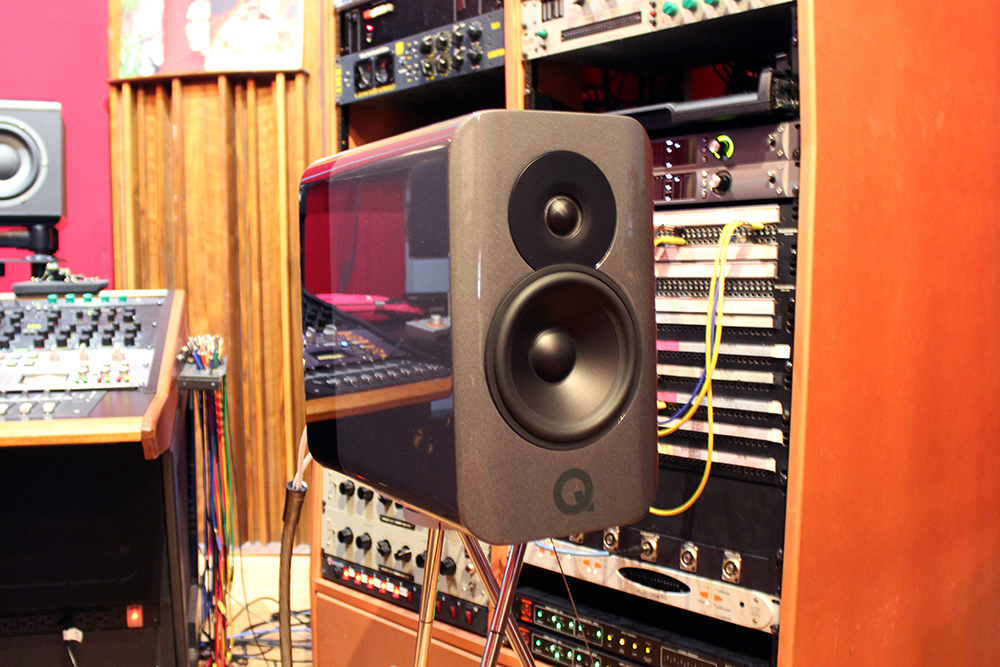 Perhaps due to the fact that Q Acoustics sells direct rather than through dealers, the company wasn’t particularly high on my radar screen prior to the Concept 300 audition. That has changed -- I was impressed not only with the speaker’s performance and aesthetics, but with pretty much everything about the company. For example, the Concept 300’s marketing brochures are gorgeously put together and contain extremely detailed and useful information about the speaker, its specifications, and its technologies. Little things like that can tell you a lot about a company -- and these things told me that the company is serious about what it produces.

Because of what I heard from the Concept 300, I asked Q Acoustics for an opportunity to hear the flagship Concept 500 and to also let me know of any upcoming press-worthy product events. Keep an eye out on Soundstage! Global, because I have a feeling this won’t be my last Q encounter.