A Day at VPI Industries: Don't Call It a Comeback

As I wrote before on Soundstage! Global, my past visits to New Jersey’s VPI Industries, a maker of turntables, phono stages, and record-cleaning machines, have been to the company’s showroom, VPI House. During this latest visit, I also toured the company’s factory, located less than five minutes from that location.

Mat Weisfeld, VPI’s president and the son of its founder, Harry Weisfeld, picked me up at the local train station. When we arrived at the factory, I established a home base in Mat’s office and readied my camera and writing pad. Forty years ago, the now semi-retired Harry Weisfeld started VPI in the basement of his New Jersey home. As the company grew, VPI relocated to Queens, New York, before settling in Cliffwood, New Jersey, and then moved to its present location, an even larger space in Cliffwood. 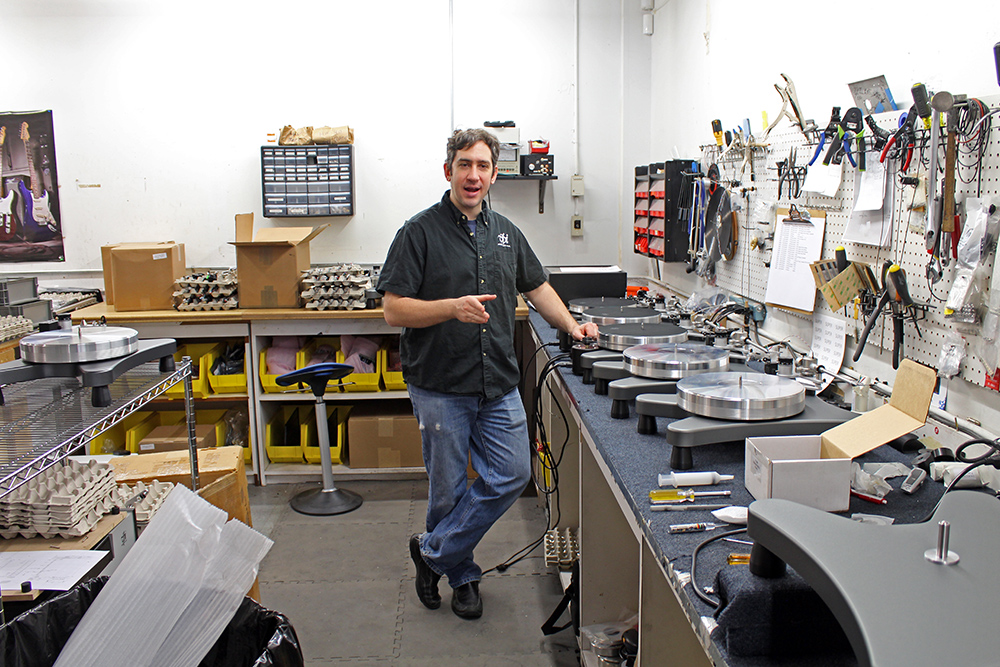 Entering the front office area, we passed a handful of employees who were chatting with dealers on the phone and tending to orders. This is also the area where Mat’s office is located. Sitting around a large table in that office, Mat and his father periodically discuss new product ideas, many of which are also vetted with an ad hoc committee of the company’s employees. For the most promising ideas, parts specifications are provided to outside vendors and prototypes are manufactured. “At that point, we’ll see if it works,” Mat told me.

Heading toward the 5500-square-foot factory floor, I noticed the VPI paraphernalia that decorated the office’s walls and tables. These included framed articles about VPI that appeared in numerous audio industry rags, as well as The New York Times, Cigar Aficionado, and Playboy. The Playboy story is fascinating. During the early 1990s, Harry and Sheila, his late wife and Mat’s mom, were at the New York Audio Show demonstrating the company’s TNT Mark IV turntable. During the demonstration, a Playboy centerfold model approached the couple, pointed to the TNT turntable, and stated that she wanted it. The Weisfelds later loaned the turntable to her and it appeared in a two-page Playboy article, a copy of which now hangs on VPI’s wall. The turntable wound up at the Playboy Mansion, where it remained until it was returned to VPI about five years later. 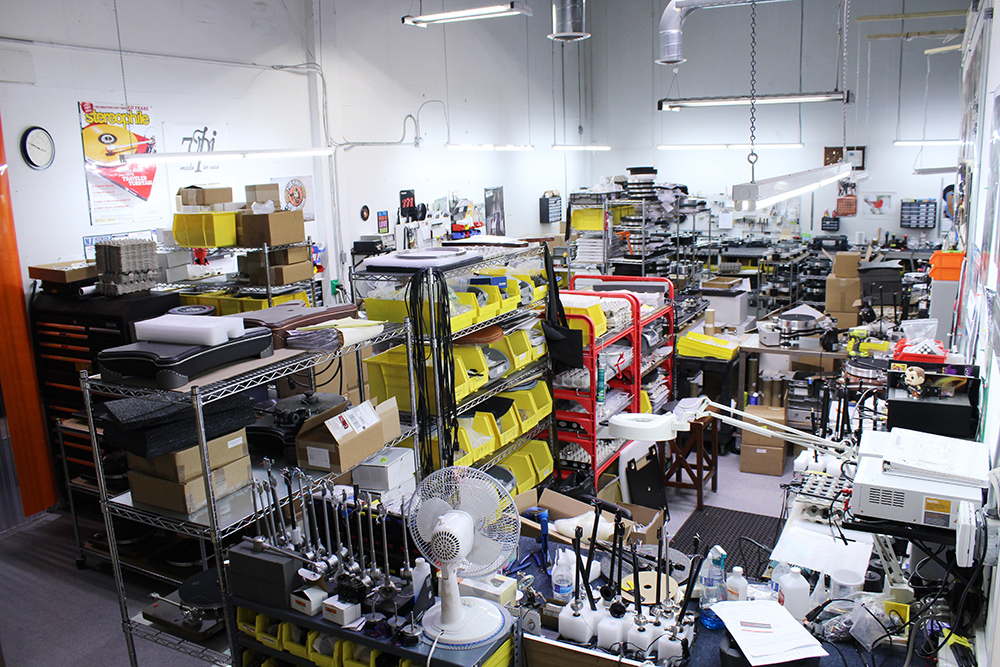 Mat and I then entered the factory floor. With turntable platters and other shiny metal parts stacked high, and with extremely bright florescent lights everywhere, I adjusted my camera settings. It was right about then that Mat announced that the factory was closing for lunch. So off we went to Mat’s favorite Greek restaurant. Yes, audio journalism can be tough work.

Back on the job after our extended break, I learned that the factory is primarily used to assemble VPI’s products. The company sources many of its component parts from local vendors with whom it has often decades-old relationships. What I saw was a highly professional, modern, and efficient assembly operation. Mat is a student of “lean manufacturing,” which entails systematic and continuous waste reduction, and increased productivity within a manufacturing or assembly chain. 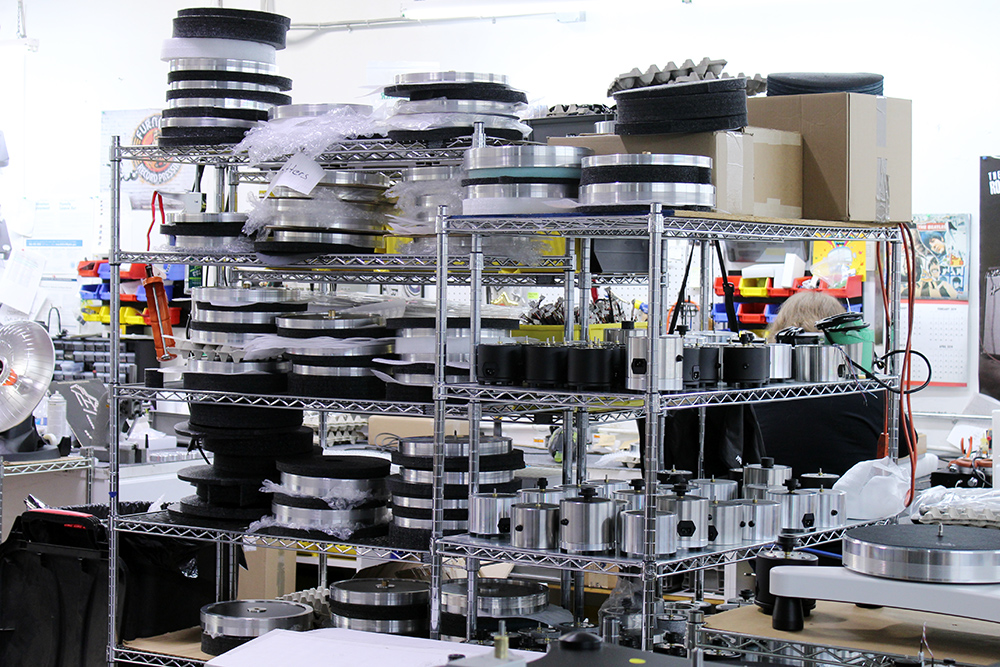 In short, here is how VPI’s factory operates: Once the component parts arrive from vendors, they are routed to the first quality control (QC) station, where they are checked for visual blemishes and obvious electrical flaws. For example, if a motor is noisy, it gets pulled out of production here. Parts are also graded at this initial stop, with an “A” grade being the best.

Grade-A parts move further into the assembly process. At this stage, VPI modifies the motors and certain other parts, increasing their performance and reliability. Also, electrical parts are wired and subjected to additional QC tests. 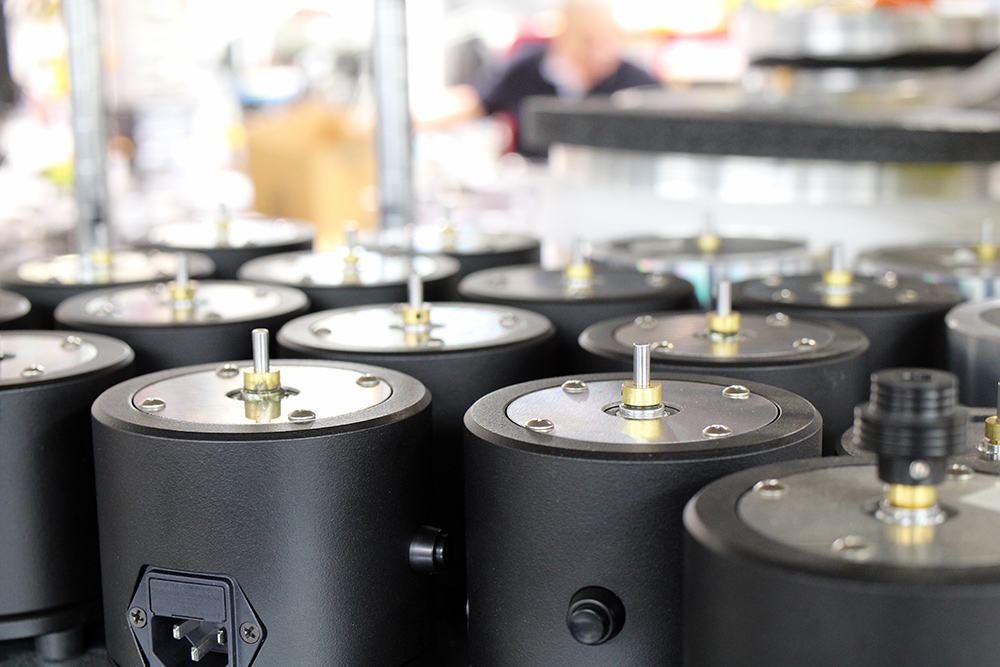 Parts that fail the QC tests are returned to their vendors. Those that make it this far are routed to one of several workstations. The station for shared product parts resides in the factory’s center. Dedicated parts, used for only a single turntable, phono stage, or record-cleaning machine, are delivered to product-specific workstations located on the factory’s perimeter. There, the products are hand-assembled one at a time. Since taking control of VPI, Mat has greatly increased the number of shared parts used by the company. This, he states, has simplified VPI’s ordering and inventory-management processes, and has also allowed for substantial cost savings, as well as quality improvements.

The finished turntables, phono stages, and record-cleaning machines are given a final visual QC check, packaged, and then stacked as they await shipping. 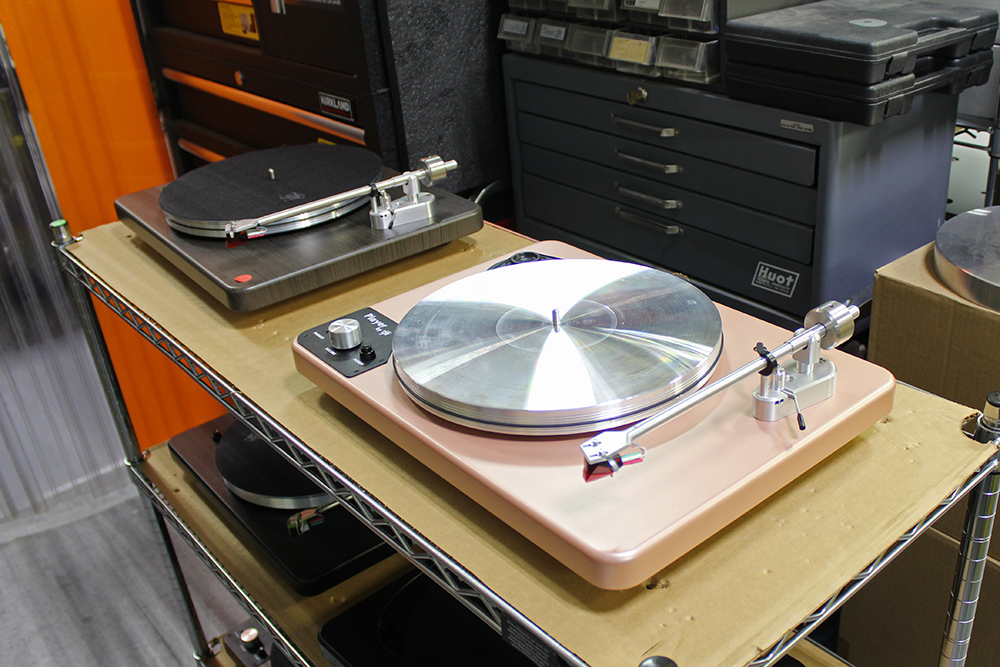 As I further toured the factory, I witnessed a wide variety of VPI products being assembled. The company’s entry-level Cliffwood turntable is $900, followed by the feature-rich Player, which, besides having a tonearm and cartridge, also has a phono stage and headphone amplifier built into it. From there are the Prime Scout, Prime, and Prime Signature turntables, which, along with the Cliffwood and Player, flesh out the Performance series. Above those are the Reference-series turntables: Avenger, Avenger Plus, Avenger Reference, and Titan, the latter costing $40,000. Phono stages range from the $500 Cliffwood to the $2500 Voyager. I also saw numerous Mark Levinson-branded turntables being assembled, which VPI manufactures for that company on a white-label basis. 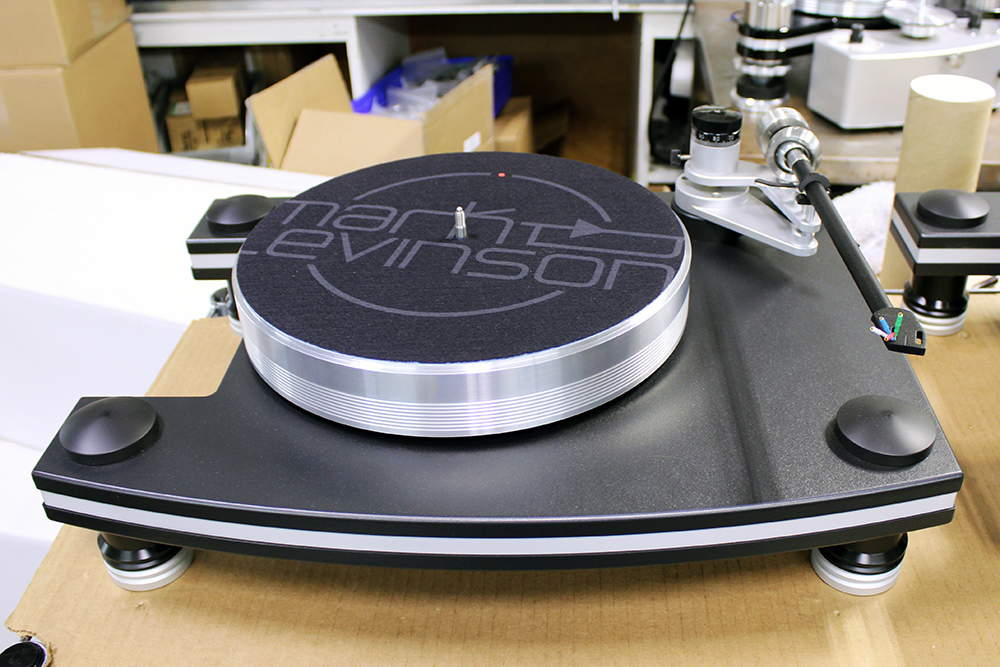 Additionally, I spied some uncommon VPI products -- there were several funky custom leather-clad Design Prime turntables that will appear in the retail stores of fashion icon John Varvatos. There was also a VPI-branded turntable mat that was discontinued because it looked too colorful and “blingy.” 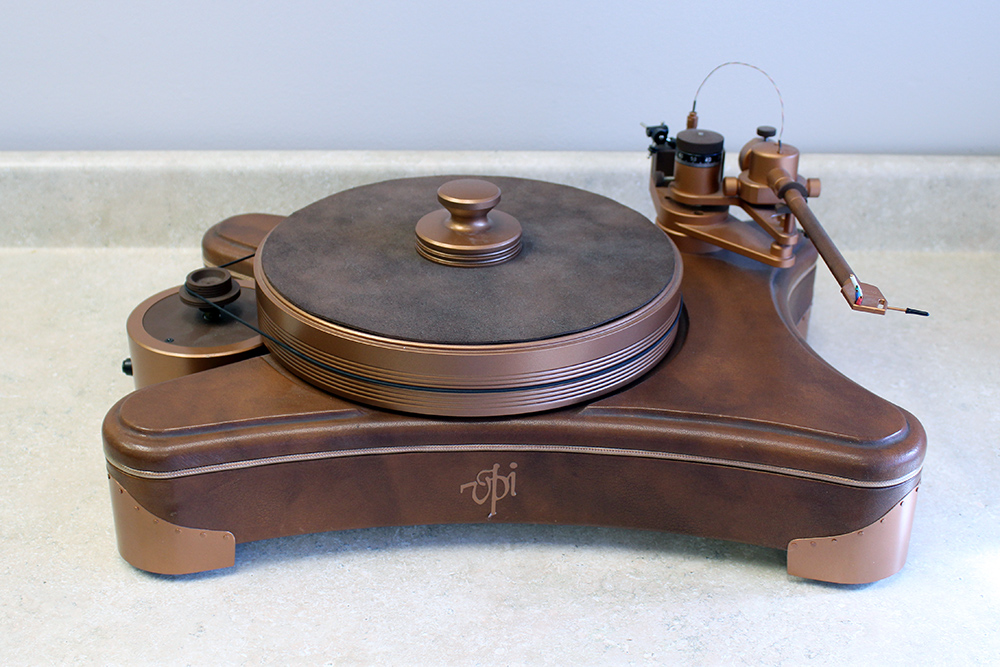 It’s not difficult to conclude that VPI has now outgrown its most recent and largest factory. Everywhere I went, space was at a premium and parts and finished products were stacked toward the ceiling. If it wasn’t for Mat’s productivity and efficiency studies, the jam-packed factory would be unworkable.

Back in Mat’s office, we spoke about VPI and the vinyl industry in general. Mat told me that in the future we can expect more VPI direct-drive turntables like the recently introduced 40th-anniversary HW-40 ($15,000), which I previously wrote about. This will include, Mat stated, a lifestyle-oriented turntable. According to Mat, direct-drive turntables are “dead quiet,” and are highly musical due, in part, to their extremely consistent rotational speed. 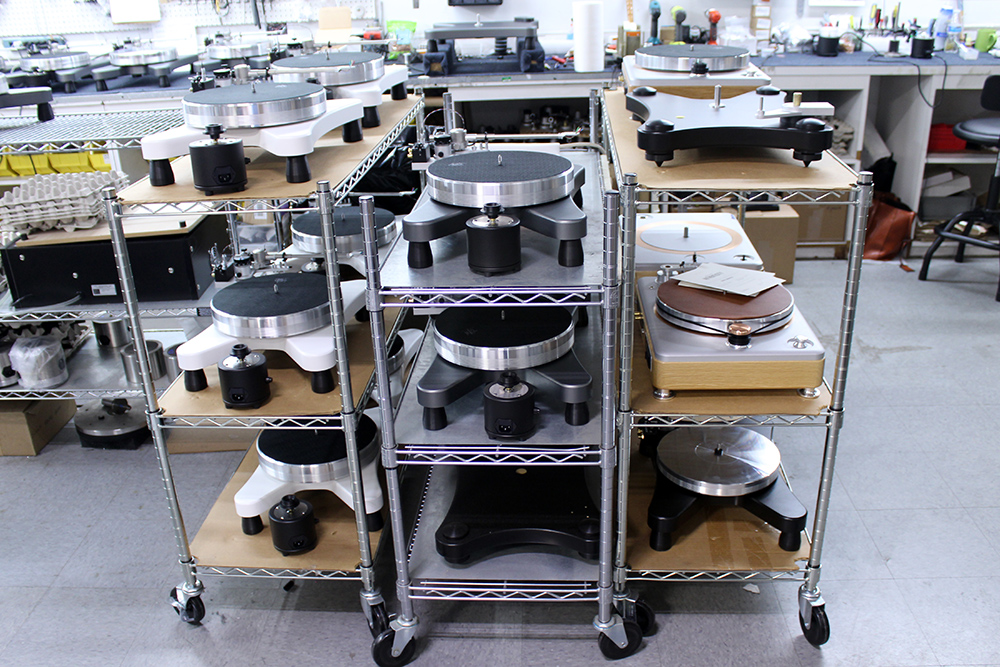 Mat also told me that they’re coming out with a high-end phono stage, which should be priced in the $6000 to $8000 ballpark; several new tonearms; a new record-cleaning machine; and a VPI book. Finally, Mat chuckled when asked about a vinyl “comeback.”

“Vinyl never left the building,” Mat asserted. “The pie got smaller, but VPI took a larger piece of it because we stuck with it.” 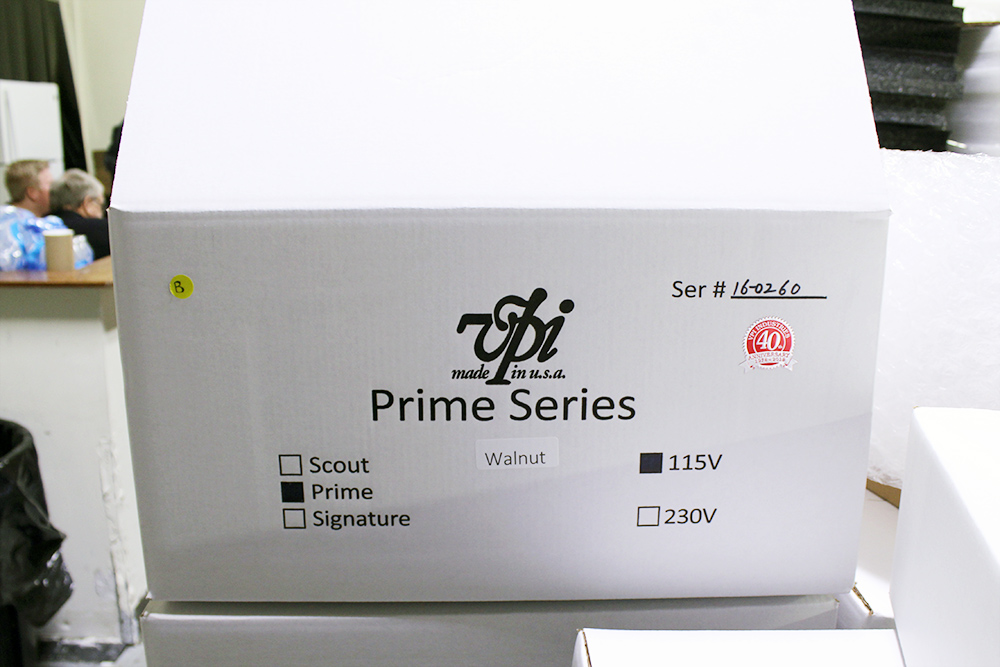 After a full day at the factory, Mat and I headed to VPI House so that he could show me some of the latest audio gear contained in the building’s five listening rooms. But a report on that gear and any upcoming new product events will have to await a future article. Stay tuned!