Return of a Legend: Upgrading with the Paradigm Monitor SE 8000F Loudspeakers

Can you call the Paradigm Monitor SE 8000F ($1699.98 per pair, all prices in USD) a legend if it is the first iteration of this new model? I do, because it’s based on the highly regarded and long-running Monitor 11, the largest model in Paradigm’s previous Monitor line. The model names for the Monitor SE line are mostly new, but the 8000F clearly owes much of its heritage to the beloved Monitor 11. In fact, Zoltan Balla and Blake Alty from Paradigm said as much in their recent interview with Dennis Burger on our SoundStage! Access website. 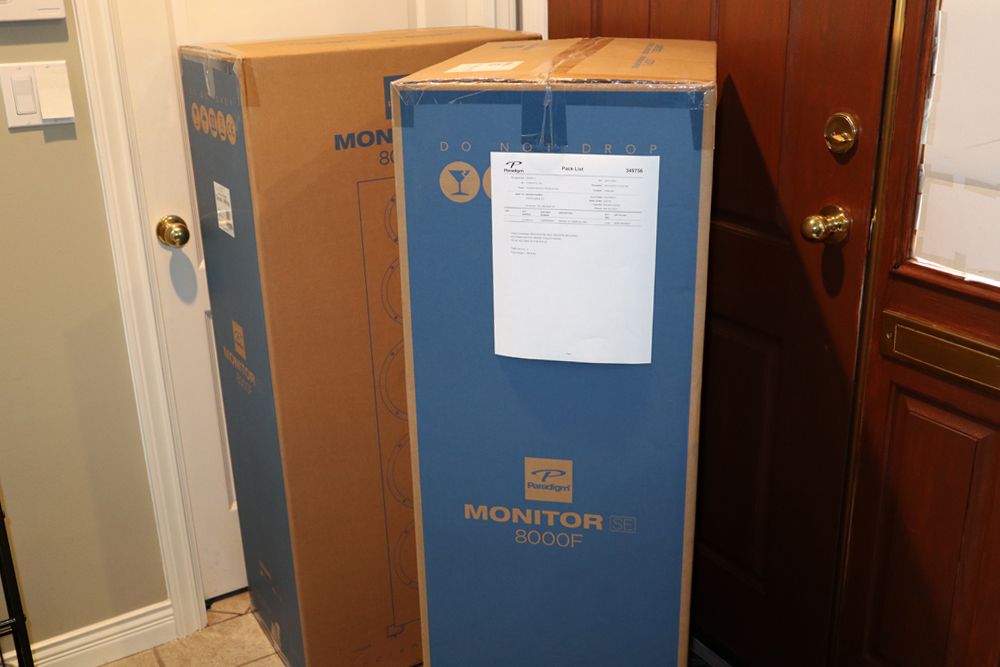 Bucking the recent trend toward smaller, slimmer designs, the 8000F is definitely on the larger side by budget-speaker standards. It has three sizeable woofers in addition to a midrange driver and tweeter. While the last iteration of the Monitor 11 was relatively thin with 6.5″ woofers, the 8000F goes all out with 8″ woofers. In fact, although I knew it would be big, I was still surprised at how large the shipping boxes were when they arrived at my home.

You can read Dennis’s review and interview for technical details about the 8000F, but one thing he said is that because they are fairly large speakers, they won’t be for all people. They require some space to breathe and likely won’t work well in small rooms. Nonetheless, I ordered a pair to upgrade my second system by replacing a pair of PSB Alpha T20s ($1099 per pair), based on Dennis’s review and my previous experiences with Paradigm speakers. Don’t get me wrong—I love the sound of the Alpha T20. It sounds smooth and sophisticated while still being quite neutral and having good bass for such a small floorstander. However, I’ve often thought that I could use more speaker in this system, and the 8000F seemed to be just the ticket. 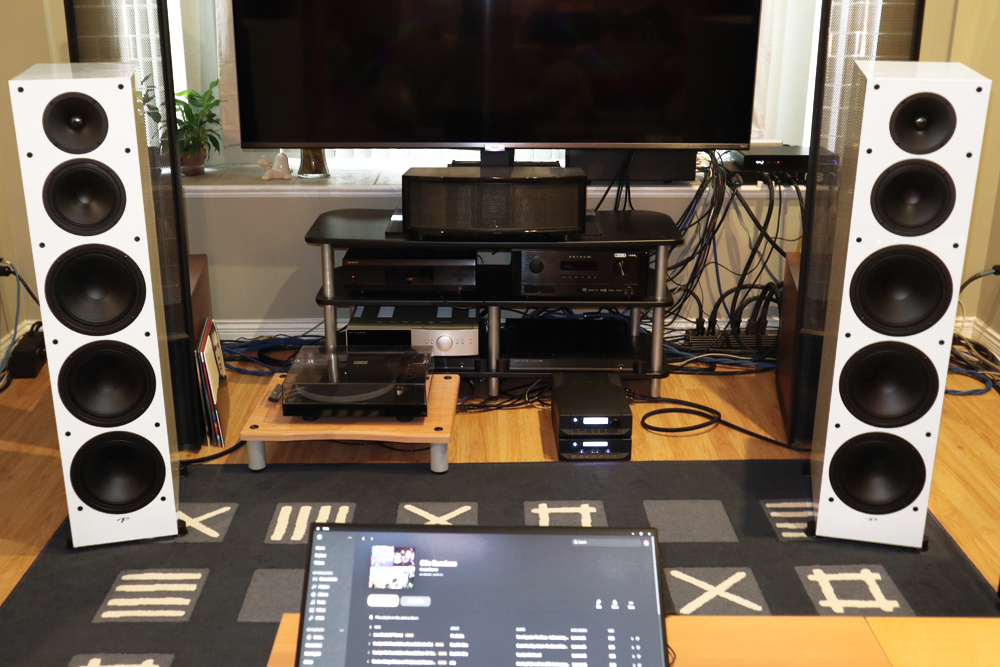 When I first set up the 8000Fs, I put them in my larger room to see what they could do with plenty of space and the very capable Cyrus i9-XR integrated amplifier-DAC ($4499) I had in for review to drive them. The sound was big and gutsy but still refined. I could play the Paradigms as loud as I could stand, up to levels that would normally have me fearing for the safety of the speakers, but with the 8000Fs, there were few, if any, signs of distortion even at these extremely high volumes. Cranking “The Safety Dance (Extended Club Mix)” from Greatest Hats by Men Without Hats, the bass was explosive but still super-controlled, with the woofers starting and stopping on a dime. There was also excellent soundstaging, with sharply defined images that stretched evenly between the speakers like nothing I had heard before from such reasonably priced transducers. In my living room, with plenty of space and a high-end amplifier, the 8000Fs were even more than I had hoped for, but the real test would be how well they performed with a slightly more modest amplifier, placed in the corner of my family room.

With their voluminous cabinets, the 8000Fs do need a bit of space to sound their best, along with some distance to the listening position for all those drivers to integrate. I thought that the corner placement in my family room might be problematic, but the big Paradigms sounded fantastic there. Sitting about seven and a half feet back from the speakers, I found the sound remarkably coherent with amazingly deep and surprisingly responsive bass. Another foot of distance from the speakers would probably have been ideal, but the placement of my furniture didn’t allow it. 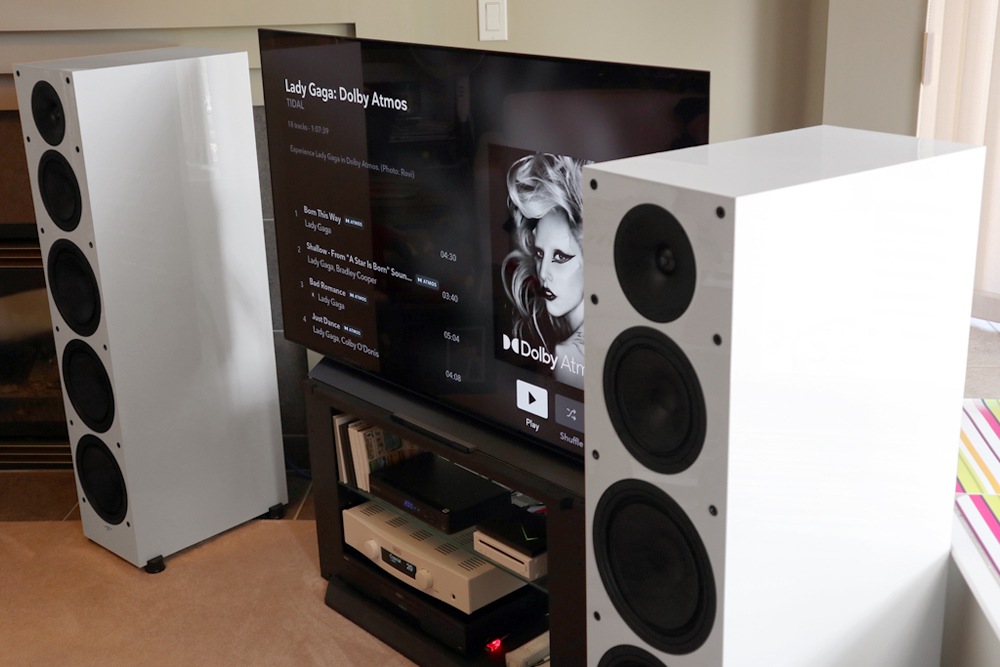 While I was watching the excellent Apple TV+ limited series Pachinko, the Paradigms put up a huge wall of sound that greatly augmented my enjoyment of the program. The dreamlike quality of Nico Muhly’s orchestral score perfectly complements the pastoral shots of gently flowing fields and dragonflies in the opening scenes of the first episode with its lilting strings and buoyant wind instruments. This transitions to the lively 1960s Grass Roots hit, “Let’s Live for Today,” played over the opening titles as the vocals move slowly from left to right, introducing a delightfully twangy guitar. The Talking Heads’ “Road to Nowhere” is then interjected perfectly into the mix, accompanied by some seriously deep bass as a jetliner touches down, and the scene shifts to a pachinko parlor amid the atmospheric sounds of patrons’ voices and clinking metal balls filling the air. 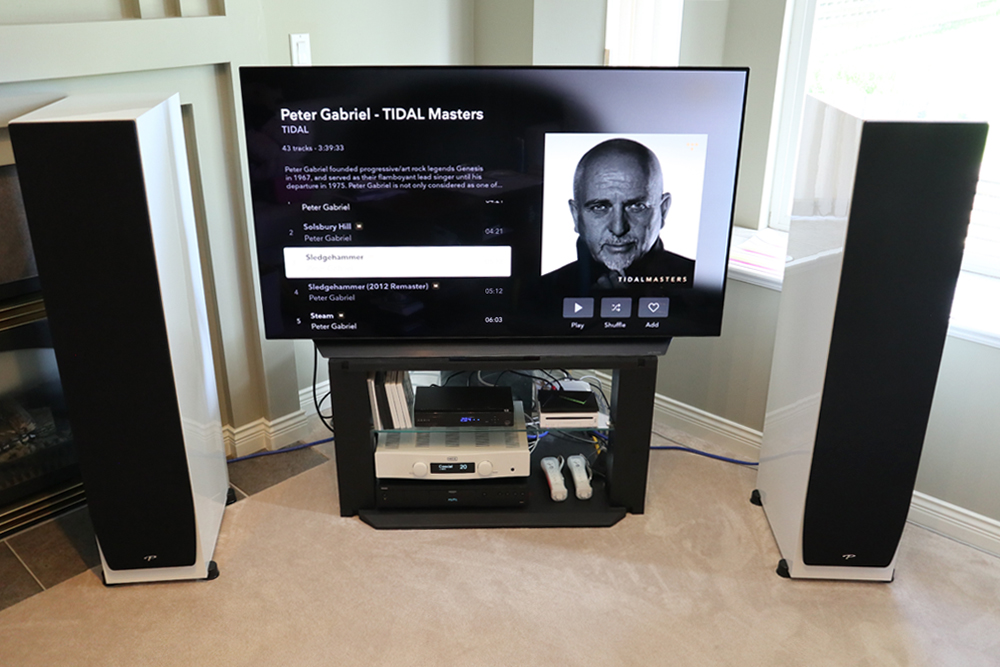 Listening to Tidal streamed to the Hegel H120 via Roon, Chromecast Audio, or the Nvidia Shield TV Pro via the LG OLED TV was a bit of a revelation. Thanks to the 8000Fs, I now had sound quality in my second system that didn’t necessarily rival that of my reference system, but neither did I have to make any excuses for it. The 2021 EDM remix of Madonna’s “Frozen,” titled “Frozen on Fire” and featuring Sickick, was absolutely slammin’ on this system. Not only were the processed vocals supremely clear yet eerily disembodied, but the bass beat was so deep and taut that it shook me down to my bones.

The 8000Fs sounded just as good with acoustic tracks featuring closely miked vocals. Morten Harket’s falsetto on “Take on Me” from A-ha’s MTV Unplugged: Summer Solstice sounds more mature and measured than it did when the song was first released on Hunting High and Low in 1985. The Paradigm speakers were able to capture all the subtleties of his vocals and the intimate arrangement of the gently plucked guitar and pensive but full-bodied piano in an extremely delicate manner.

I could keep on going about how much I am enjoying the Paradigm Monitor SE 8000Fs, but I’ll just say that, combined with the Roon Ready Hegel H120 and my various digital audio and video sources, it’s a system I am totally satisfied with whether I’m watching TV and movies or listening to music. Of the many Paradigm speakers I’ve reviewed and owned over the years, the Monitor SE 8000F is probably my favorite and already a legend to my mind.