For me, the key to most good unboxing experiences is the juxtaposition between expectations and initial impressions. Unfortunately, that put me at something of a disadvantage when I was tearing into the packaging for DALI’s new Oberon home-theater speaker system, comprising the Oberon 1 bookshelf speakers ($599/pair, all prices in USD), Vokal center ($549), and E-9 F subwoofer ($799). Given that this was my first hands-on experience with the manufacturer’s offerings, my expectations were nebulous, to say the least. 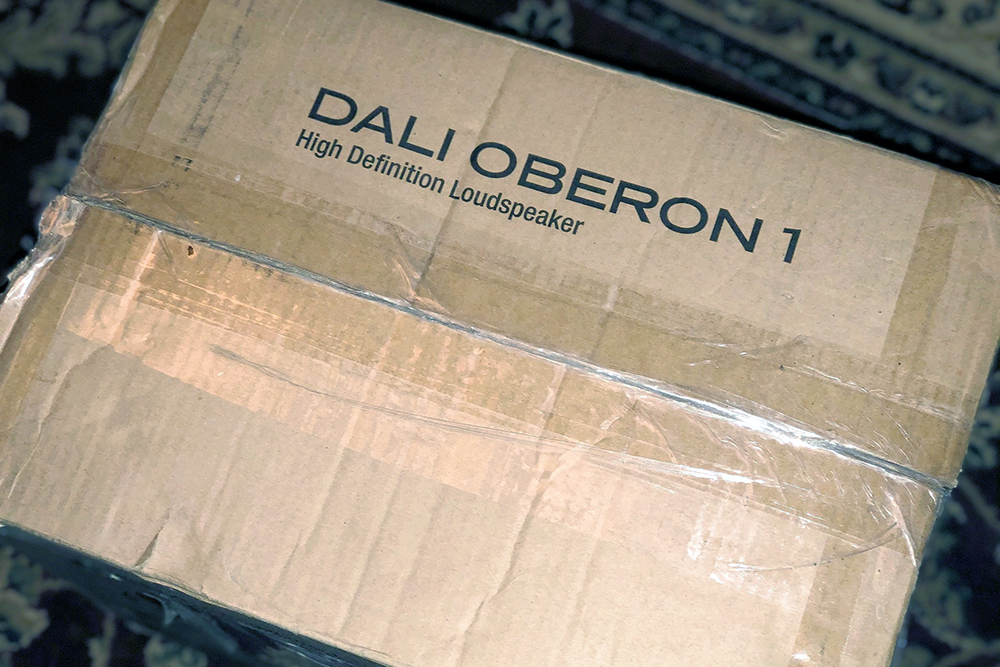 DALI’s reputation precedes it, of course, at least when it comes to performance. But a speaker isn’t merely a sound-making machine—at least not for most people. It’s a functional sculpture. Perhaps a design element. In some cases, a work of art. In other cases, an eyesore. And it was in this sense that the Oberon system existed as something of a Schrödinger’s electroacoustic transducer for me. My expectations for $599/pair bookshelf speakers are generally pretty low, but after reading on DALI’s website that the Oberon speakers are dressed in vinyl, not wood veneer at the very least, I’d be lying if I said that a stray “bless your heart” didn’t cross my mind.

Perhaps that’s why I decided to unbox the Sub E-9 F first. Who knows? But I’m glad that I did, since it whetted my whistle for quite a few pleasant surprises to follow. Two things struck me almost simultaneously (after I stopped chuckling at the IKEA-style unboxing instructions on the top of the box). First, the E-9 F is an itty-bitty little thing. It’s smaller, in fact, that you might assume, given the fact that it sports a 9″ cone and a bass-reflex design. 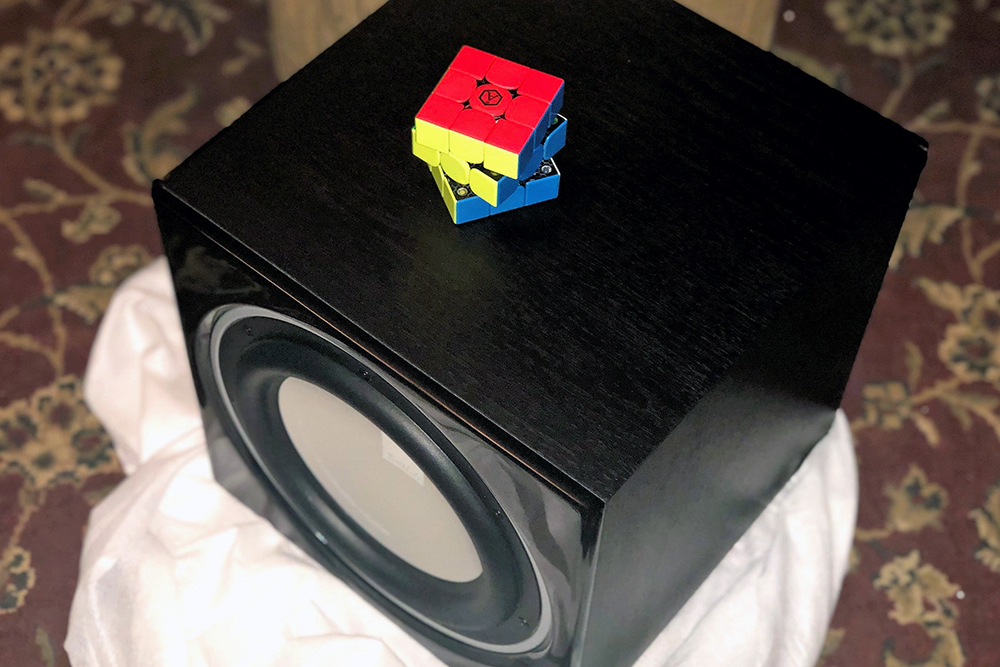 Pictures alone don’t really give you a proper sense of scale, so I scanned the room for something relatable to plop atop the cabinet before snapping a photo. My main 3x3 cube (an Angstrom GAN 356 M, if you’re weirdly curious about such things) happened to be within arm’s reach, so it won the lottery. And I think its 56mm (approximately 2.2″) dimensions give you a good idea of just how compact the E-9 F cabinet is.

But I mentioned two simultaneous thoughts above, didn’t I? The second thought that occurred to me is just how substantial the cabinet of the E-9 F feels. It’s not heavy, mind you. The whole kit and caboodle weighs in at just 24.25 pounds. Nevertheless, the cabinet feels solid, well-built, beefy.

A quick look at the back of the E-9 F reveals pretty standard subwoofer controls and I/O. I would have liked to see a variable phase control here (if only in principle; in practice, the YPAO room correction in the Yamaha AVR I’ll be using to review the Oberon system will handle subwoofer phase just fine, as will any better room-correction software). The knobs for crossover frequency and volume, though, are sturdy and have a wonderful inertial feel that appeals to the potentiometer fetishist in me. 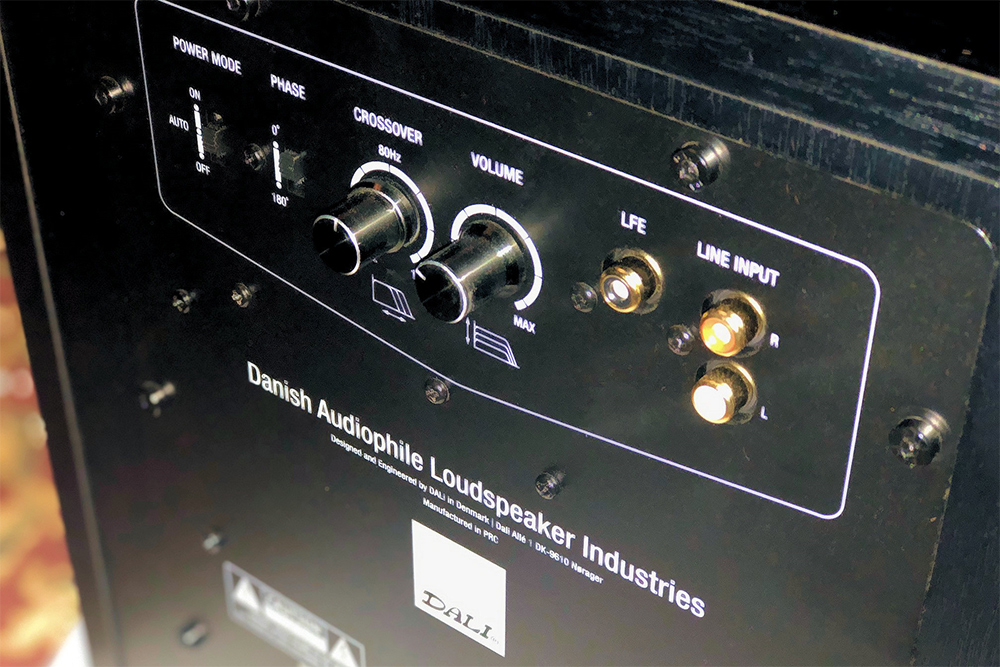 Next up, the Vokal center speaker, which was my first opportunity to check out the vinyl finish of the Oberon speakers. (Once I got past the adorable unboxing instructions yet again—complete with exclamation marks!)

I have to admit, my snobbish reservations about the vinyl were unfounded. The Vokal is a lovely little center speaker that both looks and feels a good bit more luxurious than its $549 sticker price would indicate. My review sample came in Light Oak, and the contrast between the textured surface of the vinyl and the smoothness of the matte-white front baffle creates a nice visual (and tactile) pop, especially when combined with the woven Mountain Grey grille. 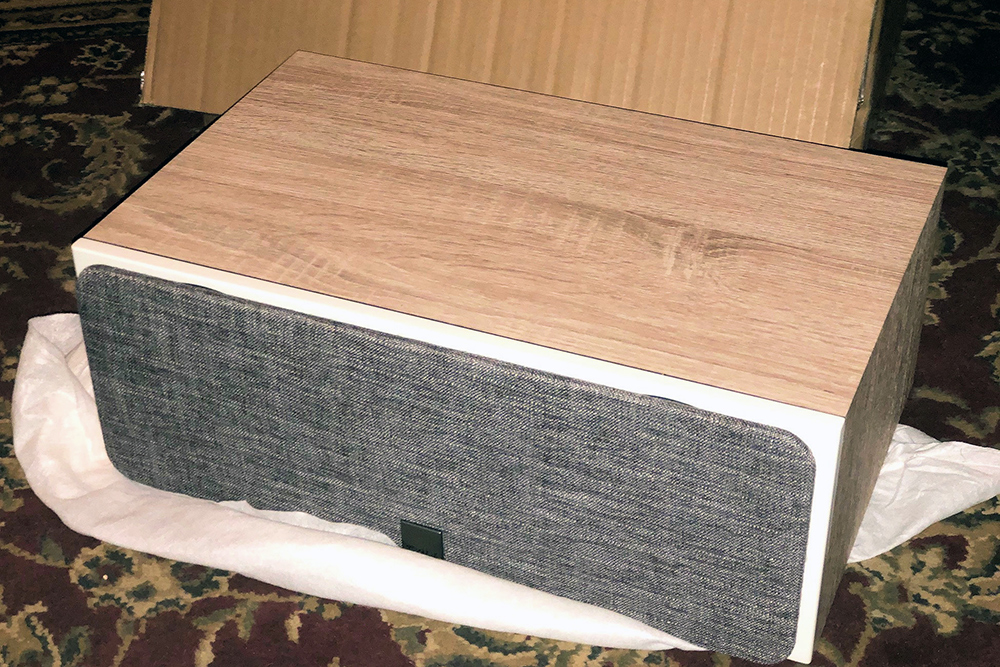 Peeling back that grille reveals not only the oversized 29mm soft-dome tweeter and the pair of 5.25″ wood-fiber cones but also the relationship between the two. DALI designed the Oberon Vokal with a raised tweeter, leading me to suspect that comb filtering (aka the “picket fence” effect) won’t be an issue, as it is with so many compact center speakers. The raised tweeter also leaves room for a capsule-shaped front-firing bass-reflex port beneath. If you’re installing your center speaker in an AV cabinet with an enclosed center speaker shelf, that should be a welcome sight. In my case, though, I’ll be installing the Vokal atop a freestanding credenza, even with the front speakers, so the position of the port isn’t quite as critical.

The Vokal also comes packed with eight translucent peel-and-stick rubber feet, but I’ve yet to decide if I’ll be using them. Honestly, the cabinet feels inert enough that I wonder if the feet will be necessary at all once I set an 80Hz crossover between the sub and sats. I might also position the Vokal atop a pair of Auralex monitor pads, since the top of my credenza is a weensy bit low, and doing so would further obviate the need for feet. But I’ll make that call during setup and calibration. 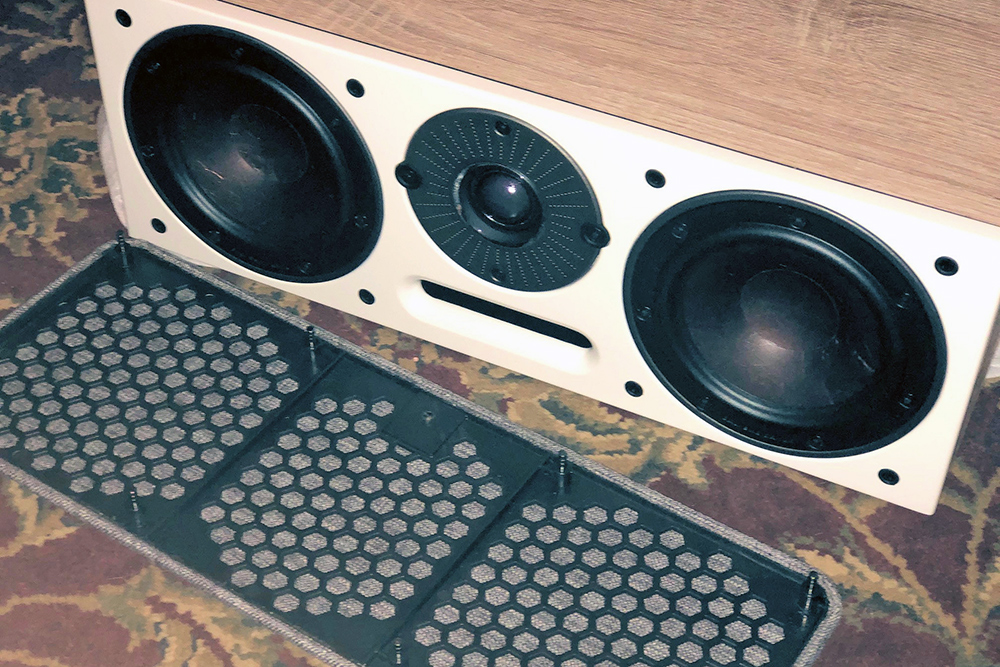 Last but certainly not least: the Oberon 1s. The bookshelf speakers come two to a box and are packaged very similarly to the Vokal. The notable exception is the foam insert between the grille and cabinet, which serves to provide a bit of extra protection for the tweeter.

The Oberon 1 features the same 29mm soft-dome tweeter as the Vokal and one of its 5.25″ wood-fiber cones. The combination is simply lovely, and I think I’ll leave the grilles off for the duration of my time with the speakers. True, the peg holes for the grilles do stand out a bit in contrast with the clean white baffle of the speaker, but not to the point of distraction. 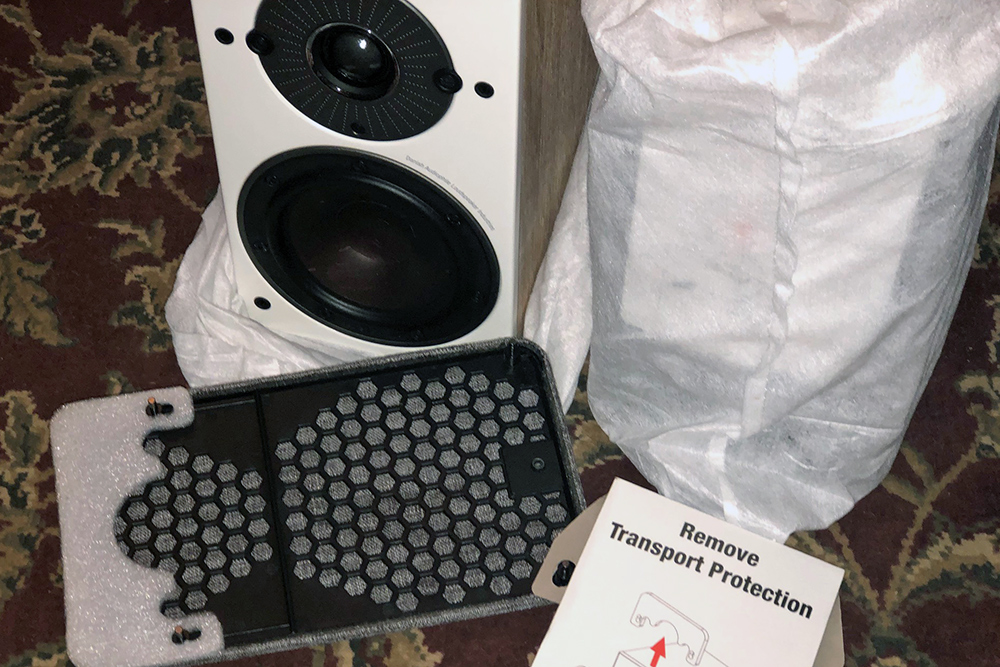 The port for the Oberon 1 is also, logically, on the rear of the speaker. It’s a bit curious that the cabinet also features keyhole mounting hardware, since a rear-ported speaker needs breathing room at least equivalent to the diameter of its port—in this case, right at 2″. At any rate, I’ll be placing the Oberon 1s roughly 16″ from the boundary behind them, so I’m not too worried about mounting hardware I would never have used in the first place.

Below the port you’ll find a pair of fairly standard insulated and gold-plated five-way binding posts. Biwiring or biamping aren’t supported, but that’s to be expected at this price. Overall, my initial impression of the speaker connections is that they’re nicely accessible and perfectly positioned for my preferred banana plugs. And although they’re not quite as schmancy as the binding posts you’ll find on speakers at this price point from Danish compatriot Jamo, they’re a step up from what you’d get on similarly priced speakers from competitors like Monitor Audio (on, for instance, the excellent Bronze 100, which does support biwiring). 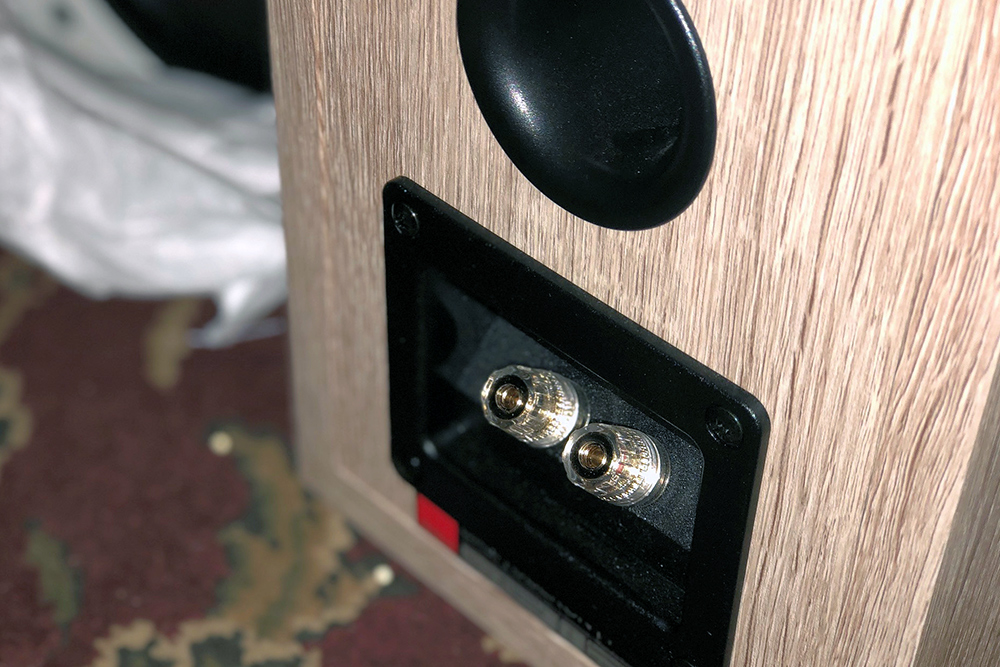 With all that out of the way, and with the packaging stashed in my spare bedroom, it’s time to start putting this gorgeous little system to the test. Have a look at my in-depth review on SoundStage! Access when it publishes on January 1, 2021.