A succession of previous owners had destroyed the home’s mid-century character, and it brings us great joy—with much backbreaking labor—returning it to something resembling its original state.

But what does this have to do with audio? 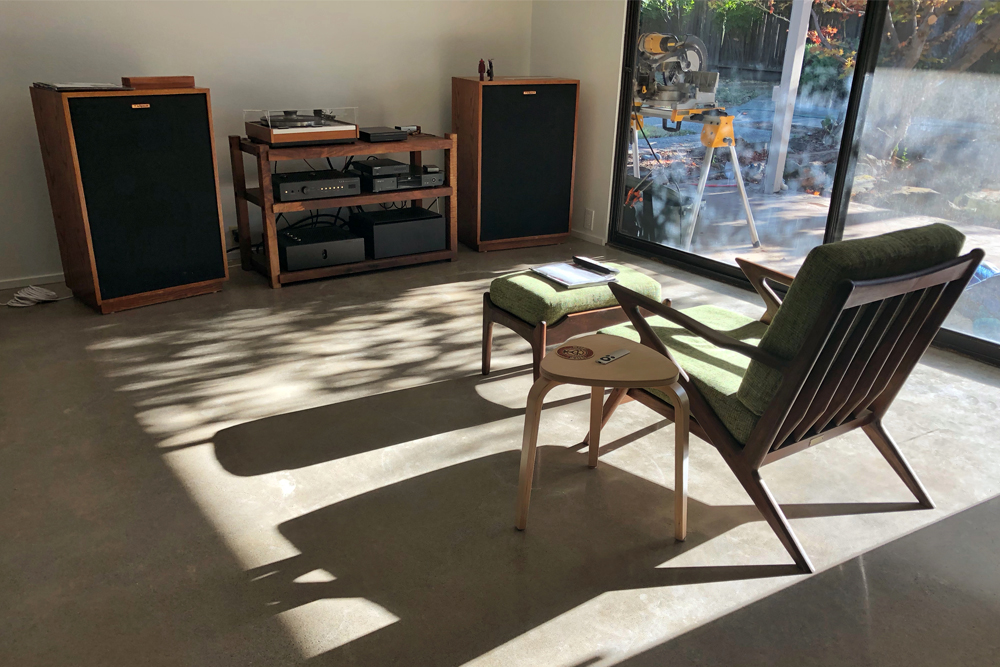 Those who enjoy listening to their favorite recorded music with intent, and assembling the musical-reproduction playback gear on which they experience it, are often faced with room choices, once settled: where and how to play it. The luckiest among us can build a purposed space. The fortunate can choose a home that already has or can accommodate an ideal listening space; the rest of us make do with what we have or can attain and hope for the best.

In finding our new home, the place we would spend the rest of our lives, we chose the latter. This silly little hobby, so high on the list of wants. We decided we would make do, and that’s by no means an admission of defeat. It’s not even a setback. But before making do, more complicated yet was a months-long interior construction renovation that prevented even an initial two-channel setup.

A little brown box to the rescue

My longest quiet/dry period was nearly four months, in early 2003, during the invasion of Iraq. Aside from the 24 songs on my squad leader’s MP3 player, we saw and heard nothing. There was no access to TV or radio or any kind of programming during the war. I felt its absence.

In our new and empty home, an old Tivoli Audio Henry Kloss Model One ($179.99, new in 2022, all prices USD) saved our summer—and introduced us to the new community. Day and night—as we ripped up the floors, gutted each bedroom’s baseboards and walls, patched ceilings, broke concrete, and painted—it was CapRadio, based out of Cal State Sacramento, that filled the silence and kept us company. I’ve especially loved “Excellence in Jazz” Sunday through Friday nights, and then “The Thistle & Shamrock” and the modern art show, “Saturdays at 6,” on Saturdays.

The old Tivoli gave us a boomy but chuffing bass-reflex sound, one that filled the atrium admirably. But I was thirsting for something greater.

In my last blog post, one of the audio setup pet peeves I mentioned was putting audio on a room’s long wall (or in front of a window or in front of / above a fireplace). I mentioned then that our new space might be better than we could have imagined. And, yeah, well, I’ve got some crow to eat for now setting up on the long wall. But hear me out—it is better than I imagined. Half of the long wall is a short wall.

The new living room is roughly 25′ × 14′, but that’s not the listening space; there is only one long wall (north facing), and it holds two setups. The west-facing actual short wall has a fireplace and, opposite it, facing east on the other actual short wall, is a floor-to-ceiling slider. Behind the rightmost listening space, facing the far right side of the long wall, is my work desk, and behind it is the wall to the kitchen (with a wood slider). At the leftmost side of the room, facing the long wall, is a couch in front of the TV. Behind it are the open atrium, the exposed aggregate walkways, and open garden beds.

Before moving in, we had the asbestos popcorn ceiling abated and repaired; then we had the bare cement floors ground and polished—since that required a literally empty home. But if you (I, me) take the new home audio setup’s backwards planning out far enough, the first step in preparing to prepare is mapping the electrical box to see what you’re getting at your desired plugs.

By necessity, we took this to comical proportions. 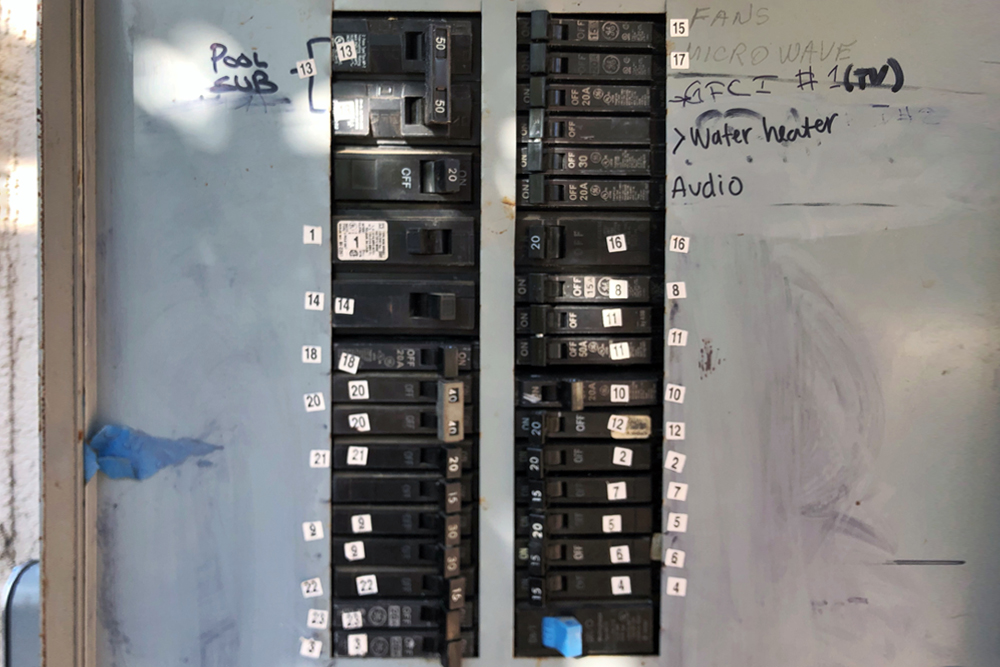 And repeat until it was all mapped.

Once the home’s electrical layout was sorted, we studied our planned usage for each room compared to the existing circuits in those rooms and determined which were or could be overloaded.

(Wait, what does that mean? Well, in the son’s room, he’s got a MacBook Pro, a TV, an old home-theater receiver, a Nintendo Switch, and a PS4. In the daughter’s room, she has the same, minus the PS4, but adds a Blu-ray player. That doesn’t add up to a ton of current on a single 15A circuit, but then, that shared circuit also runs the hallway, guest bathroom, and dining room. There is potential for tripping, or exceeding, that circuit’s amperage. In the living room, all of my gear in the home theater and the two-channel setup would exceed the 15A threshold on that one shared circuit, especially since it is shared with the atrium, office, and parts of the kitchen. This would also lead to tripping that circuit—not to mention potential ground loop hum, which can occur when one or more pieces of electronics are plugged into the same circuit at different locations.)

So first up was getting where I envisioned the home theater and the two-channel setups in the living room (aforementioned long wall) off its single, shared circuit. Not only would that circuit be overburdened in the room, it was shared with other rooms in the house. Getting a single, dedicated 20A line to each setup would prove critical to the home’s safety and the equipment’s reliability, not to mention its performance and ability to keep quiet. 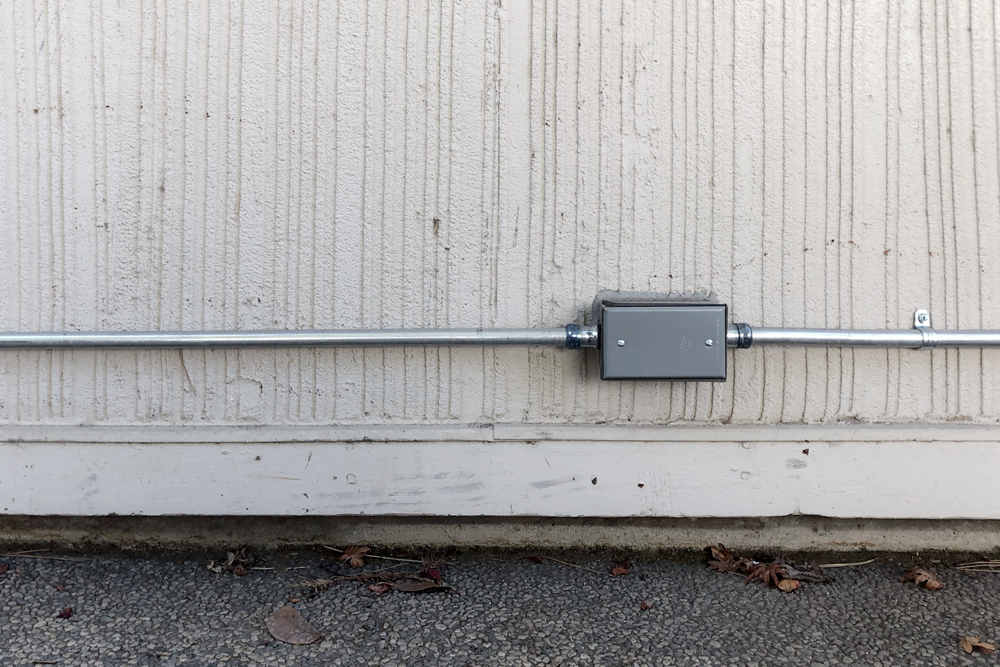 With no crawl space and no attic in our mid-century modern marvel, most of the home’s not-original and additional wiring is surface mounted externally via metal conduit beneath the patio’s overhang/eaves. To reach the back of my living room’s long wall, externally, we called a local electrician for the install. We could’ve done it, and have done it before, but they did it quicker and cleaner.

We also asked the electrician to work with our utility company to replace our electrical box. We’re upgrading to a supposedly future-proof “solar ready” 225A panel, up from an old 200A panel, though that still hasn’t been completed, and we haven’t yet gone solar, nor do we yet own an EV. 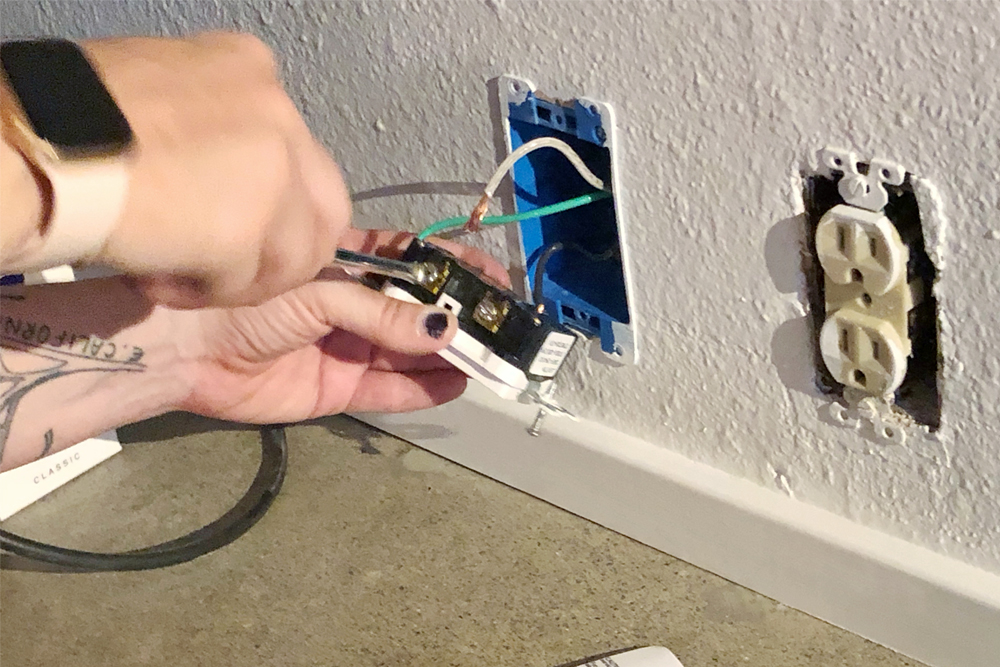 Finally, we replaced every original beige-colored two- and three-prong outlet with modern Leviton (about $20) 15A or 20A (where applicable) GFCI outlets and new faceplates. And for the living room, we purchased and installed two brand new PS Audio Power Port Classic ($49) receptacles for the two specialized audio applications. I won’t be able to A/B test or compare, nor do I have a baseline in this home to judge their effects on the sound—I simply trust that the PowerPort Classic is an accessibly priced and well-made product that, if for no other benefit, offers premium grip to the stiff and heavy power cable that plugs into it, compared to what was there before.

Does it make better or quieter sound? I won’t have an answer, but I welcome sincere input, minus marketing jargon, from anyone who can explain how the PS Audio receptacles differ from the costlier AudioQuest and Shunyata variants I cross-shopped—or even the well-made Levitons from Home Depot for even less. 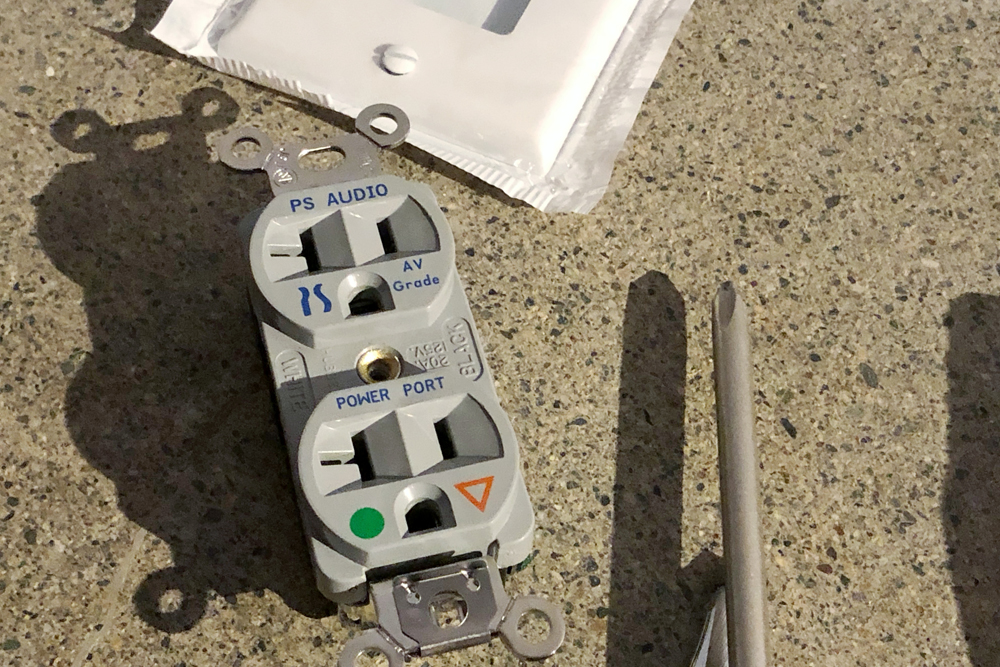 Here’s your buried lede. The purpose of this blog post is to document my setting up my listening space in my new home and to establish its baseline: new electrical box, dedicated 20A line, and new “audiophile” receptacle. Regardless of whether you agree with my choices or purchases, this is my floor. This is its beginning. The baseline. Every gear change (and review) from this point forward will enact change, for better or worse.

Until now, at this point of the setup, there has been no test, no trial, no A/B, no critical listening. But there has been hum—with all inputs, hearable at the work desk behind my listening chair. 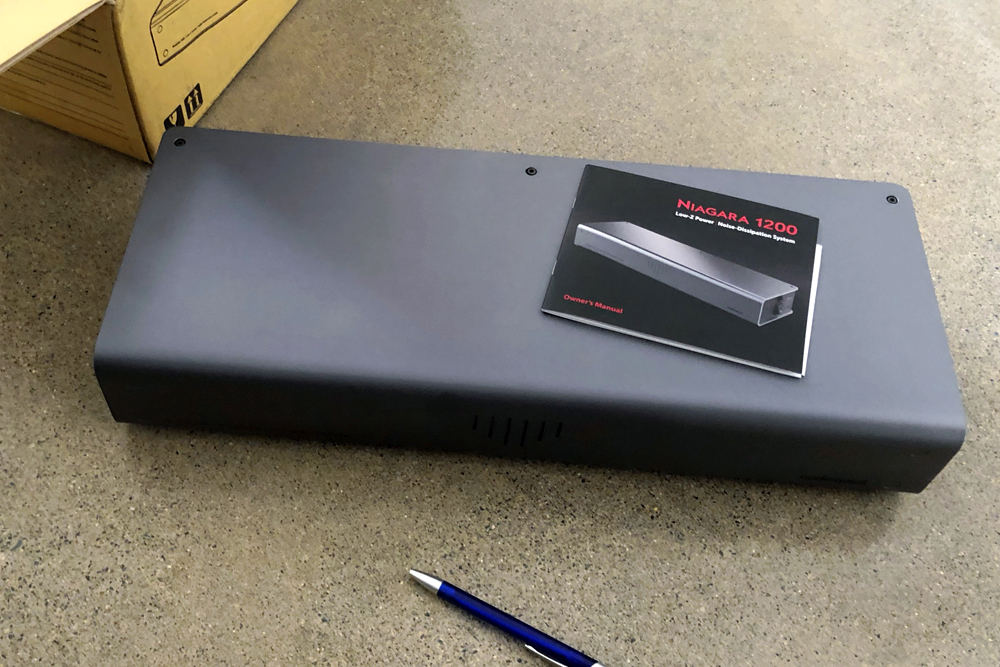 So I (sold an extra amp and) bought an AudioQuest Niagara 1200 Noise-Dissipation System ($1295) from a local dealer. While waiting on shipping, I got about one week of vinyl and CD and mostly CapRadio streaming through Volumio software on my RPi4 streamer connected to my Denafrips Ares II DAC; all of my system playback then was plugged into a basic Fuhrman surge protector before the Niagara arrived.

Each morning, I turn on my gear and watch the backyard sun rise—casting long shadows from neighboring trees through the glass slider, across the polished cement floors and into the living room’s short wall, while I work East Coast hours. Thus begins my work day.

But there’s something else: I’ve also got a new amp. I bought it in April, in Maryland, and received it in late June, at my in-laws’ home in California about seven weeks before I’d even be able to unbox it and turn it on in the new home. 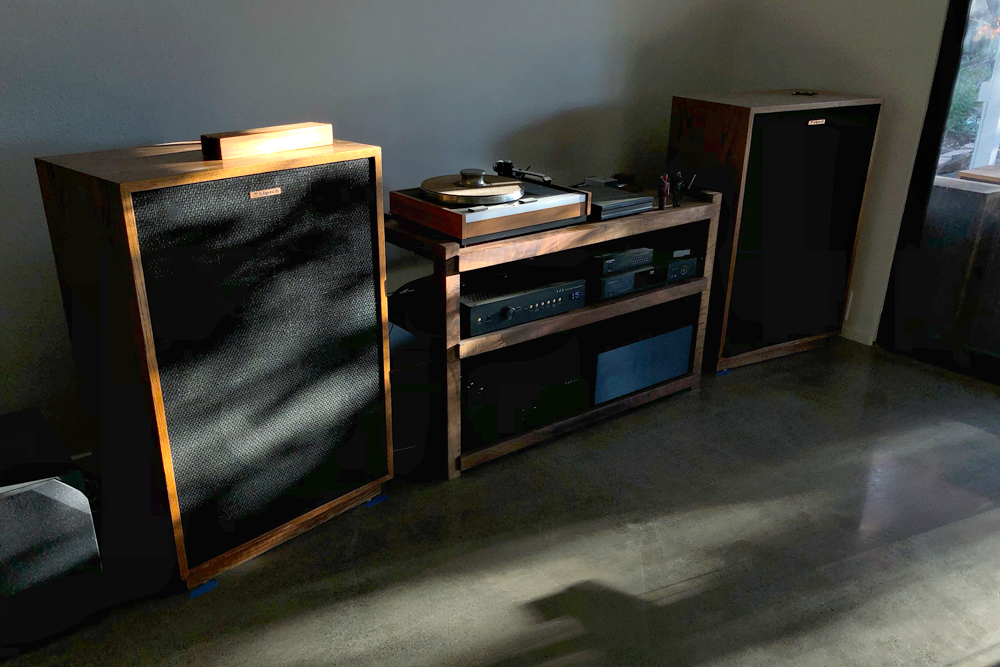 It completes my new floor, my new baseline—and it’s better than anything I’ve ever heard in any of my own previous homes. I’ll tell you about it, the Niagara 1200, and how my new room sounds next month.

The autumnal equinox has come and gone. Early dark and falling leaves mean it’s decorative gourd season, but for others, like me, fall means Type O Negative season. The Brooklyn quartet disbanded following the death of ringleader/vocalist/bassist Peter Steele in 2010, but the band left us with a scattering of “goth rock / metal” albums that are at best both beautiful and haunting, but also wallowing, self-deprecating, and sleazy / middle school immature. Take their music seriously—or their jokes—and the joke’s on you.

Don’t be afraid to laugh, or to like it.

Longtime fans no doubt love the early stuff like 1990’s Slow, Deep and Hard, and the following year’s supposedly live album, The Origin of the Feces, which features a cover of Jimi Hendrix’s “Hey Joe,” here dubbed “Hey Pete,” and a cover of some song called “Paranoid,” but it was 1996’s October Rust that changed the narrative. No longer content with jokey / thrash-goth noise plus harmony, it was here that the band finally realized conceptual consistency. It’s their most polished and accessible work. Listen for “Love You to Death,” “Red Water (Christmas Mourning),” “My Girlfriend’s Girlfriend,” a remake of Neil Young’s “Cinnamon Girl,” and the closing track “Haunted.” If you listen on Tidal, you’ll find a cover of “Black Sabbath (From the Satanic Perspective),” a cover from that band’s self-titled debut, and an alternate vocal-heavy take, called “Haunted (Per Version)” that accentuates Steele’s vocal gift.

The succeeding albums are also great, in parts, but it’s October Rust that defines this season and its listening mood.