November 11 is Veterans Day in the United States, the day we honor U.S. military veterans. Despite occurring during cold, grey November, it’s a happy day—as opposed to Memorial Day, which is not a happy day, since it’s the day we mourn those who have fought and died while wearing our nation’s uniform. Conversely, that day occurs in May at the joyous onset of summer . . .

Most Americans spend both days shopping for new mattresses and appliances, but I take my Veterans Day holiday slowly, pausing to reflect on and reconnect with those brothers who served with me overseas.

A few nights ago, I commented favorably on my old platoon sergeant’s updated Facebook profile picture. The man sat centered in the frame, on a stool, tie-less and jacket open. Brows furrowed, eyes confident, converged on the camera, like Anton LaVey. His younger wife stood at his side—smiling, or about to laugh—her wrist resting on his shoulder.

They looked well and I was happy for them.

The platoon sergeant’s sarcastic reply the next morning feigned shock that his “most ardent critic” had said something positive about him. In fact, over the years since we both left the Army, we’ve had many deep and meaningful conversations, connecting in ways not possible when we last worked together. You could even say that we’re friends now.

These encounters are meaningful—even when initiated virtually. It keeps our shared past alive. And, these days much of what I remember about war isn’t the war, but the people I served with while stuck there.

For the middle nine months of that first deployment, when the U.S. invaded Iraq in 2003, our infantry battalion’s headquarters element—and our artillery platoon attached to it—lived in the Mosul Hotel, a pyramid-shaped fortress on the banks of the Tigris in northern Iraq. Though the building had been looted and trashed by locals prior to our arrival, it soon became our home.

While the infantry’s Charlie company slept on cots in a giant, dusty ballroom, our platoon had commandeered the eighth floor, two to a room. It was the platoon sergeant who arranged it and contracted local labor to make it not just livable, but comfortable. Electricity, plumbing, A/C, a working elevator, new windows, TVs, daily ice blocks, and fresh local food. We even had one ethernet line for the platoon’s shared laptop.

We still staged overnight observation posts in nearby neighborhoods, completed daily mounted and dismounted patrols, and worked with elders and leaders across the city to restore basic services. Yet, only our platoon came back to running showers, flushable toilets and bidets, and balconies overlooking the city.

That means we each had some kind of personal comfort to retreat to—and to pass the time. Some wrote letters. Several others had video games. Then, like now, it was books and my favorite music that got me by. My setup—if you could call it that—consisted of a Sega Game Gear-sized 20GB MP3 player connected by 3.5mm cable to a pair of plastic Sony computer speakers.

Distortion was a feature, not a bug!

In “The Things They Carried,” Tim O’Brien wrote that “A true war story is never moral. It does not instruct, nor encourage virtue, nor suggest models of proper human behavior, nor restrain men from doing the things they have always done. If a story seems moral, do not believe it. If at the end of a war story you feel uplifted, or if you feel that some small bit of rectitude has been salvaged from the larger waste, then you have been made the victim of a very old and terrible lie.”

I realized on this recent evening that I’m now a few years older than the crusty platoon sergeant was during that year in Iraq. We didn’t come home to parades and the moral satisfaction of having destroyed great evil abroad; we simply passed our time as comfortably as we could make it, eventually returning to wherever and whomever it was that called us home.

Am I making you the victim of a very old and terrible lie?

Happy Veterans Day, my (former) brothers and sisters in arms.

Last month’s blog post ended before the new electrical panel was installed by my electricians and okayed by the county utility. That service is now complete. 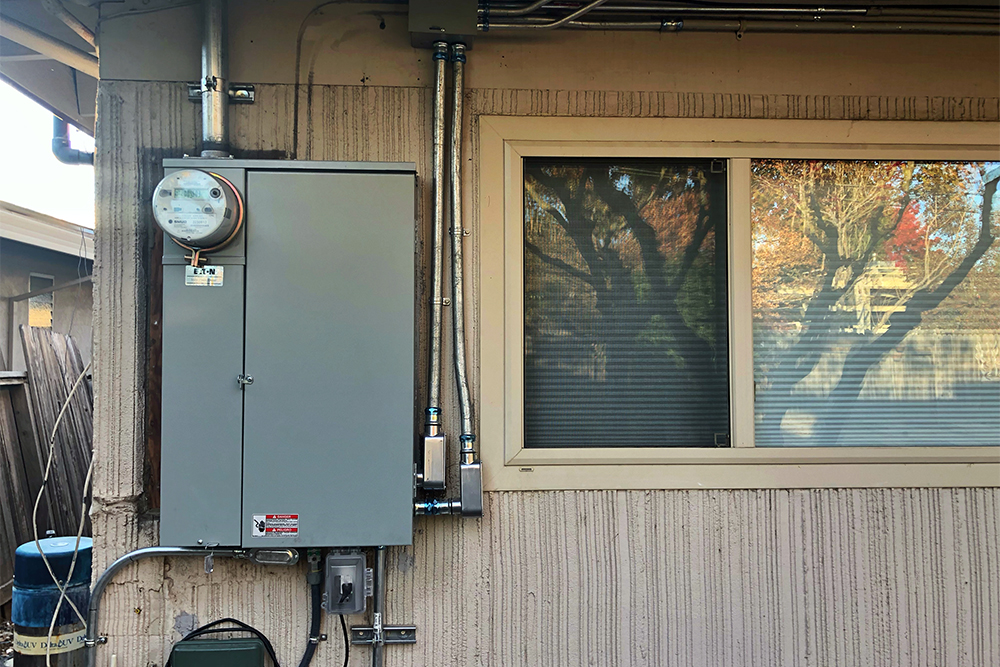 Functionally, I’m happy with the result. Inside the panel, each circuit has a more logical placement, and is now clearly and uniformly labeled. But being the type who constantly stresses about OCD things like speaker placement (how it looks in the room as much as for how it sounds at the listening spot), it’s hard for me to overlook the gaping and unfilled hole from where the older, smaller box was mounted. Aesthetically, it’s something I’ll have to DIY cement patch (my siding is “raked cement,” not stucco) and paint another time. 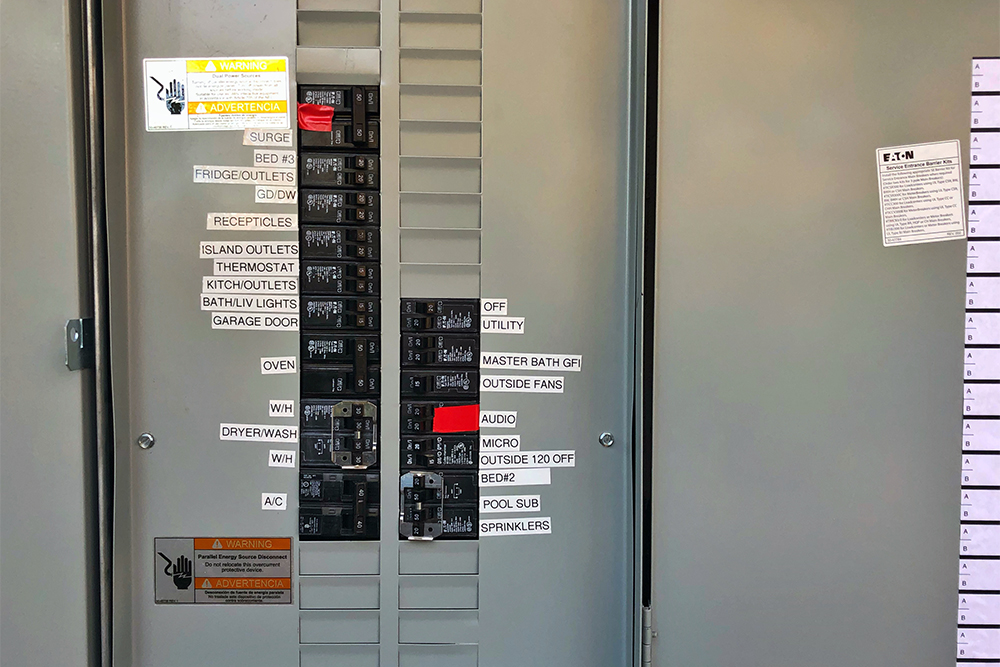 Inside the house, everything appears to work as it should—to the extent that we know what each outlet does. There are still some ghost outlets/switches that are probably unconnected to any of the circuits at the panel.

I did not evaluate my audio setup for before/after electrical panel installation.

Stifling my impatience for the newest new box was the one thing I could do to form a kind of comparison after the electrical panel was completed, while also allowing me to hear anew after changing amps in my larger space.

So I connected my DIYAudio.com First Watt Aleph J amp (roughly $1000 in parts, all prices USD) into my Klipsch Cornwall (I) speakers, and the rest of my setup into the brand new Audioquest Niagara 1200 noise-dissipation system ($1595), itself plugged into a brand new PS Audio Power Port Classic outlet ($49.99) wired on a single 20A dedicated circuit (to my desired room placement) from my new electrical panel. 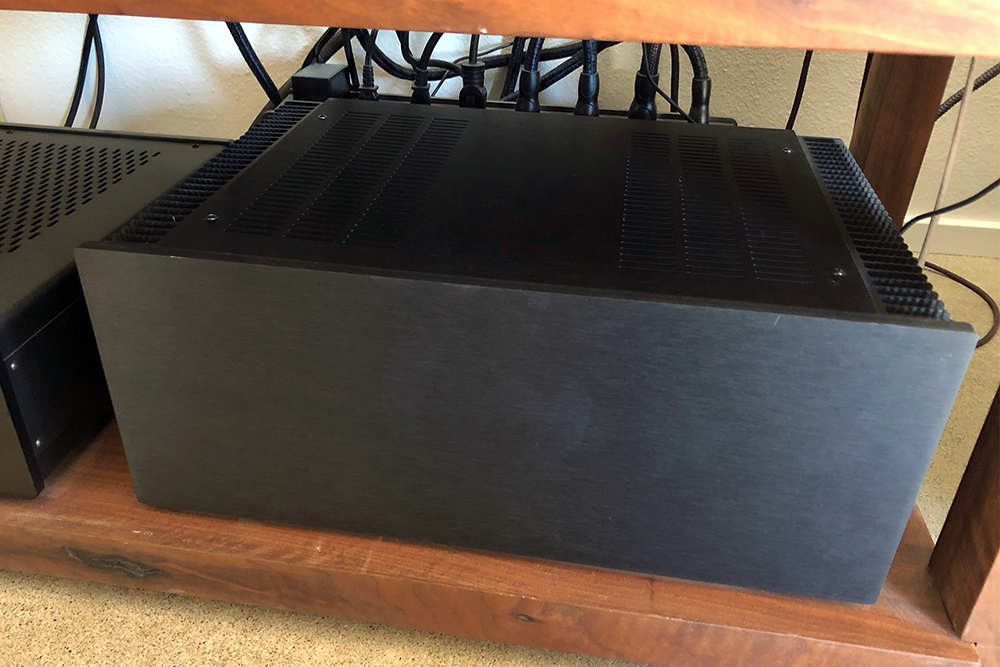 I built the AJ over a few months during the early part of the pandemic. This solid-state, class-A, single-ended amp outputs 25wpc into 8 ohms—supposedly a great match for my 98dB-sensitive Cornwalls. Only, this amp and speaker combo underwhelmed me in my previous listening space, unable to deliver the kind of dynamics I crave from my favorite noise.

In my new home’s listening space, the AJ/Cornwall combination was something entirely different. The amp was alive, as fleshy and textured as a blood orange. My favorite music oozed color and saturation (I’m not a purist) and midrange flex. Better yet, gone was the absence of lowest-octave pomp—though, think less muscle and more of a black eyeliner.

I had such a good time that my planned two days of listening turned into ten.

If I was beginning to wonder whether my new and costly purchase could live up to newly heightened expectations, I needn’t have worried. My brand new Linear Tube Audio ZOTL40 Reference+ amplifier ($6800) was game changing from first power on. It was as revelatory for me over the AJ as when, years ago, I upgraded my vintage Marantz to a killer budget preamp.

LTA is based out of Takoma Park, Maryland, not far from where I used to live, and I had, on multiple occasions—including at Capitol Audiofest—met with sales and marketing director Nicholas Tolson, who had given me a demo at the company’s storefront. The ZOTL40 Reference+ is a handbuillt, EL34-based, class-AB tube amp in push-pull configuration that uses David Berning’s zero-hysteresis, transformerless-output design for 46wpc into 8 ohms. Tolson was confident the amp could handle just about everything thrown at it, especially in a smaller- or regular-sized listening room. 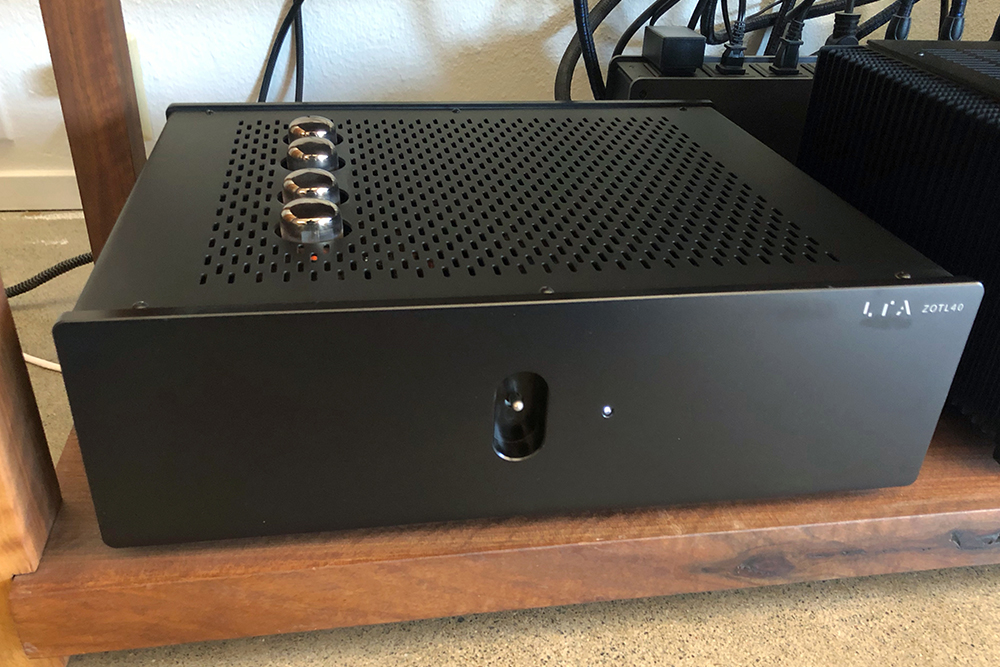 So, how’s it sound in my room?

Delectable. As precious as a Fuyu persimmon. My notes say radiant, crisp, unsaturated, neither dripping nor dry. Subtle and delicate when asked, able to roll up its sleeves when needed. Smooth and detailed at low-level listening, authoritative when flexed. If you’re counting along, that’s well-behaved and well-balanced.

In my listening, I couldn’t gather a discernible character or style. Rather, it merely illuminated already certain characteristics embedded into my favorite tunes. It’s got that “willingness to go there,” the there being whatever’s in the there you bring to it. 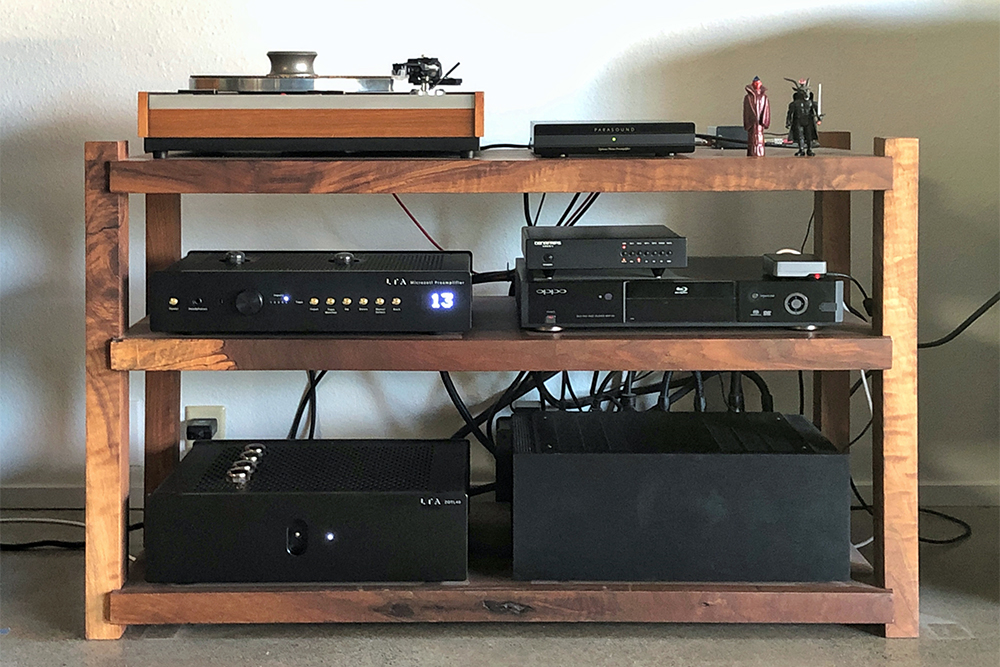 With my favorite doom noise, distorted guitars were positively carbonated. Fuzzed decays for days. On live and acoustic recordings, the plucks and picks and air around the vocals sparkled. For the less sultry, it revealed the wet-spittle laryngeal friction and resonance of my favorite growls, false chords, and screams. Drum thwacks relayed more pressure and force velocity variation than I’d known was possible. And while the Cornwalls won’t do party bass, the ZOTL40 Reference+ brings the beef down low.

Compared to the AJ, the presentation was wider, lower, punchier, and airier with the ZOTL40 Ref+. I was expecting the Cornwalls to sound brash and hard in my new and still-unfinished and reflective room, but that’s not the case. At all. These first impressions from the LTA leave me thinking instead that my previous listening space was inert and dead.

It’s now been a few weeks. Verdict? Still in love.

At one point a few weeks ago, I had over 100 tabs open on my phone, each a reminder from others (“cherish the people who share new music with you”) or a discovery myself to “check out this band.” If I’m digging the vibe, I go through the band’s whole discography. That browser, it’s like a river—the water flows but never empties. This month’s New Noise, therefore, features three new heartland albums that’ve caught my earballs. 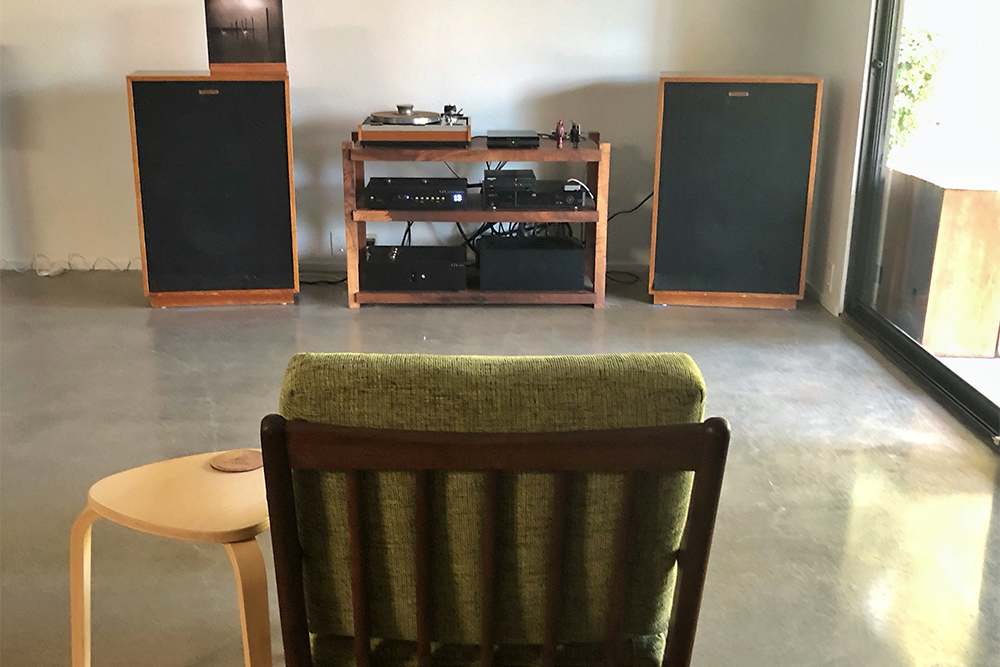 The Endless (Profound Lore Records, Tidal), released in 2022 by Denver’s proggy doom/thrash band Dreadnought, is way prettier than I expected. Mix of folky female vocals and tornadic growls over layered guitars and synth.

Skin & Sorrow (Aqualamb Records, Tidal) by Cleveland’s Frayle is another new female-fronted doomy release. The band says that it “makes music for the night sky,” perfect for this time of the year. Think sludgy, doomy guitars and breathy Björk/Stevie Nicks vocals.

God’s Country (The Flenser Records, Tidal), the 2022 debut release by Oklahoma’s Chat Pile, is my brand of workout music. Think sludgy, crusty post-grunge with a mix of sometimes rhetorical spoken word cries and “agonizing howls.” It makes me want to hit or throw things. Pitchfork gave it a “Best New Music” honor.