We did more listening at Rockport Technologies than at any other company we've toured, which was partly due to the quality of Rockport's fabulous listening room, but mostly because Andy Payor wanted to show off his speakers in the way they matter the most to him -- playing music. 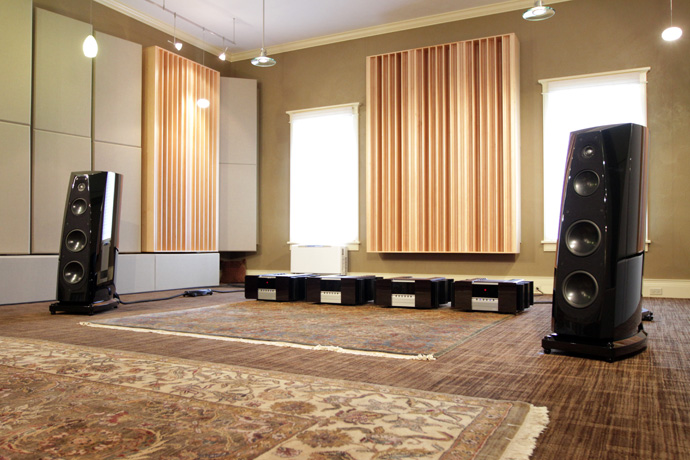 We listened to two speaker systems: the Aviors (in photo above), a four-driver, three-way design with all drivers front mounted that retails for $29,500 per pair . . . 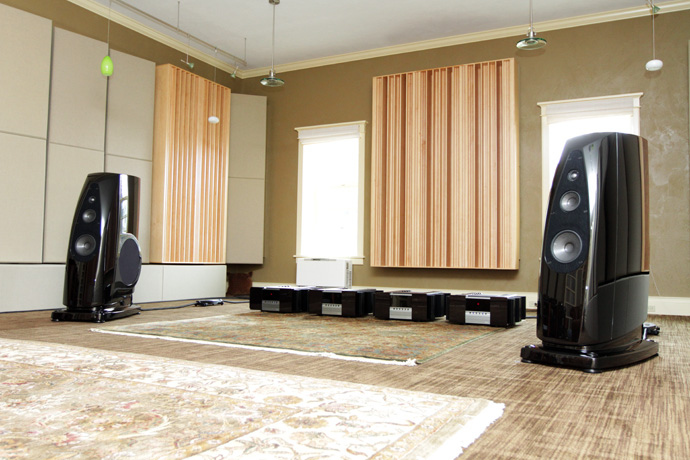 . . . and the Altairs, a four-driver, four-way design with a side-mounted woofer and a retail price of $97,500 per pair. There's also a major difference between the speakers that has to do with the cabinet materials -- the Avior uses Rockport's best implementation of MDF-based construction, which Payor feels is better than any other wood-based cabinet on the market, while the Altair uses Rockport's layered, molded cabinet, which Payor feels represents the state of the art when it comes to reducing cabinet resonances. The differing sizes and construction techniques result in the Altair being more than twice as heavy as the Avior -- each Avior weighs 220 pounds, while each Altair weighs 515 pounds. The speakers were set up in the exact same positions in the room and used the same electronics and wiring. Payor even played the same songs through each setup.

So how is the sound of one speaker that's not only close to 100 grand, but nearly three times the cost of the one that's the next step down in the line, which, by most standards, would be ultra-expensive to begin with? You might be surprised to hear that the speakers sounded far more similar than different. Then again, Payor designs all of his speakers using the same criteria -- flat frequency response, controlled dispersion, wide bandwidth, and low distortion, among other things -- so maybe it's not that surprising that, sonically and visually, they're cut from the same cloth.

Both sets of speakers sounded very full, exceedingly neutral, and very transparent. These are speakers that really get the sound "out of the box." Both systems were also very detailed sounding, revealing the good and bad in every recording Andy played, whether it was from the Blue Smoke Systems music server and the MSB DAC or the turntable that he designed.

The Altair stepped ahead by having deeper bass (subjectively, it went a good 10Hz or more lower); improved clarity, particularly from the bass through to the lower midrange; and higher output capability, although the Aviors seemed to play much louder than most would ever need them to. In terms of soundstaging and imaging capabilities, they were very close, with the Altair gaining the edge in overall stage depth and width, along with tighter image focus. So in most ways the Altairs were better, even if the differences weren't night and day.

On the other hand, even though the Altair was definitely the better speaker, I'm not sure that most would jump at the chance to spend three times as much for the incremental improvements, particularly if it strains their pocketbook. Suffice it to say that the improvements we heard didn't correlate with the price -- the Altairs were a bit better, not three times better. Plus, Payor's done something special with his new midrange driver, which is in the Avior but not the Altair. Voices sounded exceptionally clear and detailed through the Aviors. Plus, the highs were close to a draw. So without question, the Avior holds its own even against the Altair, which is likely why it was born and Payor was keen to have us hear it, even up against the Altair, which is one of his best designs. All told, the Altair provides world-class sound, while the Avior comes very close to it for just over a third of the cost.