Before Devialet's Manuel De La Fuente introduced me to the Phantom and Phantom Silver loudspeakers, he invited me into the company's boardroom to talk about something he felt was vital for me to understand -- that the resulting loudspeaker designs incorporated plenty of advanced, never-tried-before Devialet-created loudspeaker technologies, but that they were able to implement those new things only because of what the company had previously developed. 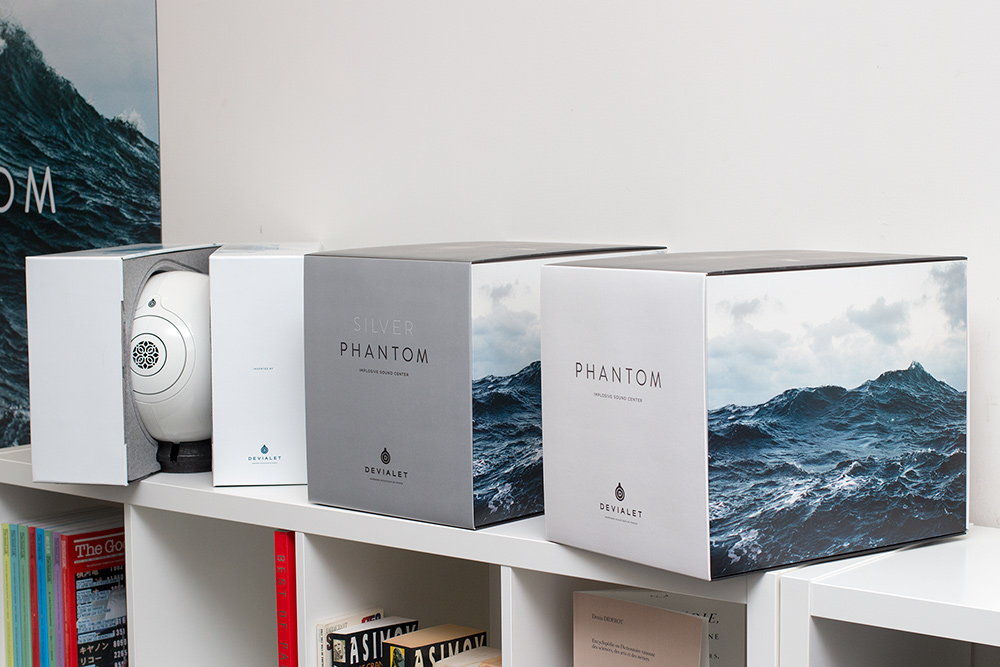 Where the Phantom project stemmed from was cofounder Pierre-Emmanuel Calmel's development of the ADH (Analog Digital Hybrid) amplifier technology, which successfully married a pure-class-A voltage amplifier with a class-D current amplifier. The first product featuring ADH was, of course, the D-Premier, which was introduced in 2010 and won praise worldwide for its performance, setting the company on the course to where it is today. I was one of the first to be able to review that product, and I absolutely loved how it performed. Today Devialet's current line of amplifiers comprises the following models: 120, 200, 400, and 800.

The technical benefits of ADH are many, which Pierre-Emmanuel knew when he conceived of the idea. But the one thing that he didn't realize at the start was how low the circuit's resulting output impedance would be -- essentially, 0 ohms. This side benefit proved to be a great thing because it allowed the amp incredible control over a loudspeaker's drivers; in particular, woofers, where it matters the most. It's this driver control, combined with high power, that gave Devialet's designers carte blanche to create a small, fully powered speaker with high output capability and bass extension right down to 20Hz -- the kind of bass performance that's usually the domain of refrigerator-sized speakers.

But there was another challenge to overcome before the Phantom speaker project could move forward -- the ADH amplifier technology used in the current line of amps was simply too big to fit into the proposed Phantom enclosure, so the Devialet engineers had to make ADH smaller. The result: the analog section of the ADH technology was put onto a square chip measuring about 1/2" across, which was the first thing Manuel showed me. The look of pride as Manuel placed it in front of me was apparent. 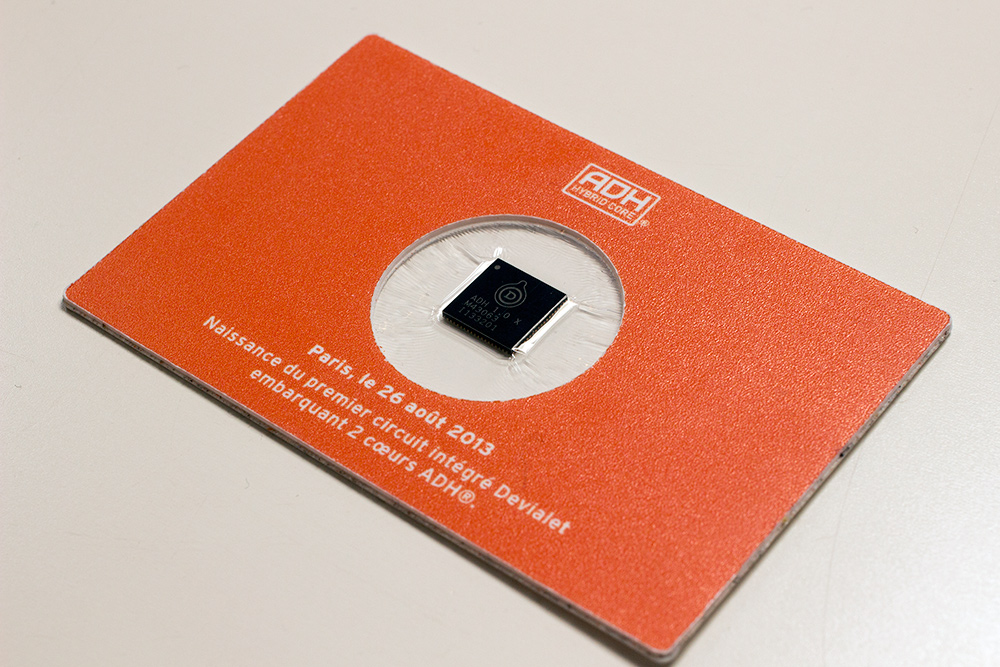 According to Manuel, the biggest challenge wasn't actually getting the circuitry onto the chip; it was getting the performance on par with what's currently in the amplifier designs, which, he said, they succeeded in doing. So with that advancement, the Phantom and Silver Phantom speakers each have eight mono ADH-based amplifiers inside, but bridged to create four mono amplifiers -- one for each driver. (The difference between the regular Phantom and the Silver Phantom, respectively priced at $1990 USD and $2390 each, besides the silver-colored woofers on the latter, is that the Silver has higher-powered amps inside. This translates into higher acoustical output from the drivers. The Silver Phantom is said to be capable of delivering in-room SPLs of 105dB, versus 99dB for the Phantom.)

Additional technologies culled from the amplifiers for the Phantom project include the power supply and DAC, among others.

Then there's the digital signal processing, which is crucial to getting the Phantom speakers to perform the way they do, since crossover manipulation and driver optimization are done in the digital domain. This is where the company's SAM (Speaker Active Matching) technology comes in, which was the brainchild of Eduardo Mendes, one of Devialet's top digital signal processing (DSP) experts. SAM debuted last May at High End, though its development did not come about in the way most think. 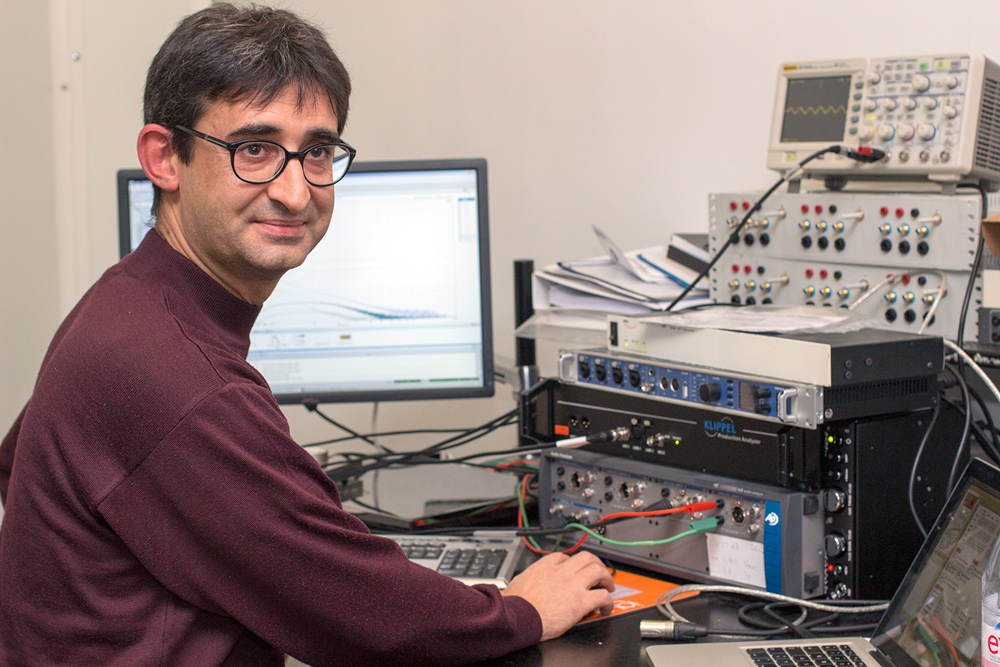 In a nutshell, Devialet's DSP technology for the Phantom project had begun a few years ago, but it was only after they were well into the work that the engineers realized that it could be adapted for other companies' loudspeakers. At first they used it to optimize bass in sealed-box designs from other companies, but then they realized shortly after that it would also work with bass-reflex enclosures. This came as a complete surprise, not unlike ADH's 0-ohm output impedance. With that discovery, SAM was born, and it's now implemented in the company's current line of amplifiers, where it can be used to correct phase and amplitude in the bass frequencies for more than 100 speakers in the company's database. All of this DSP expertise, including SAM, exists in the Phantoms.

Finally, like the D-Premier and the other Devialet amplifiers that followed it, both Phantom speakers have next to no wires inside, which is a source of personal pride for Pierre-Emmanuel Calmel. The only place you'll find wires used in both Phantoms are for the voice-coil leads within the drivers. 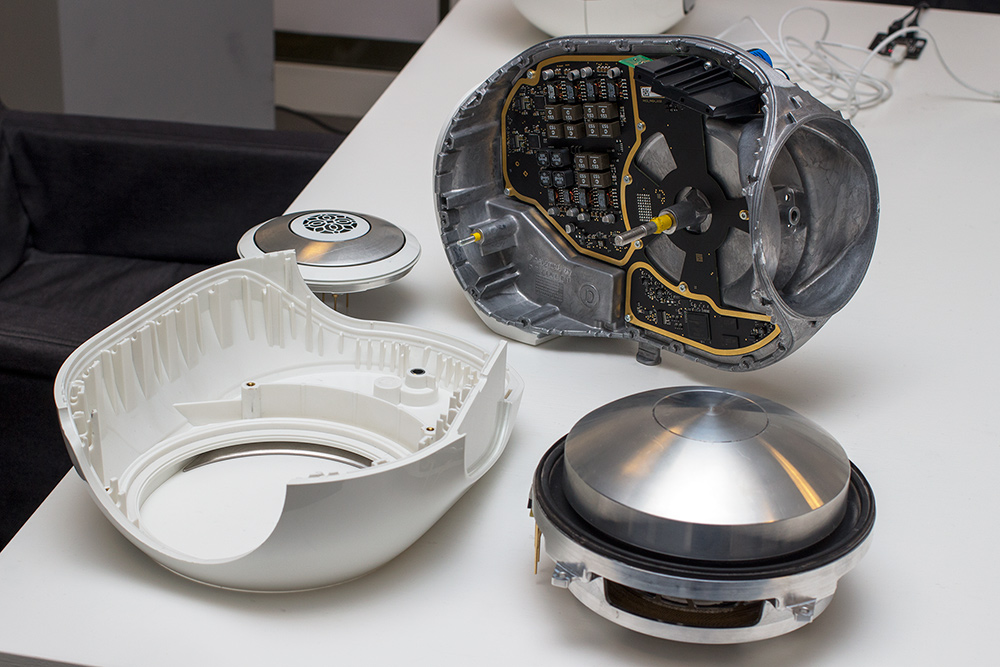 The implementation of the company's core technologies in the Phantom speakers shows an obvious connection between Devialet's past and present; however, entirely new technologies had to be developed to make the loudspeakers work the way they do. So if history repeats itself -- and in this case, that's very likely to happen -- then you'll see these new technologies implemented in future products from Devialet as well.