I understand enough about loudspeakers to know that when acoustic designer Antoine Petroff told me, "It all started with the acoustic design," he wasn't lying. It was apparent when a box was literally lifted off a table in front of me to reveal a Phantom loudspeaker underneath. 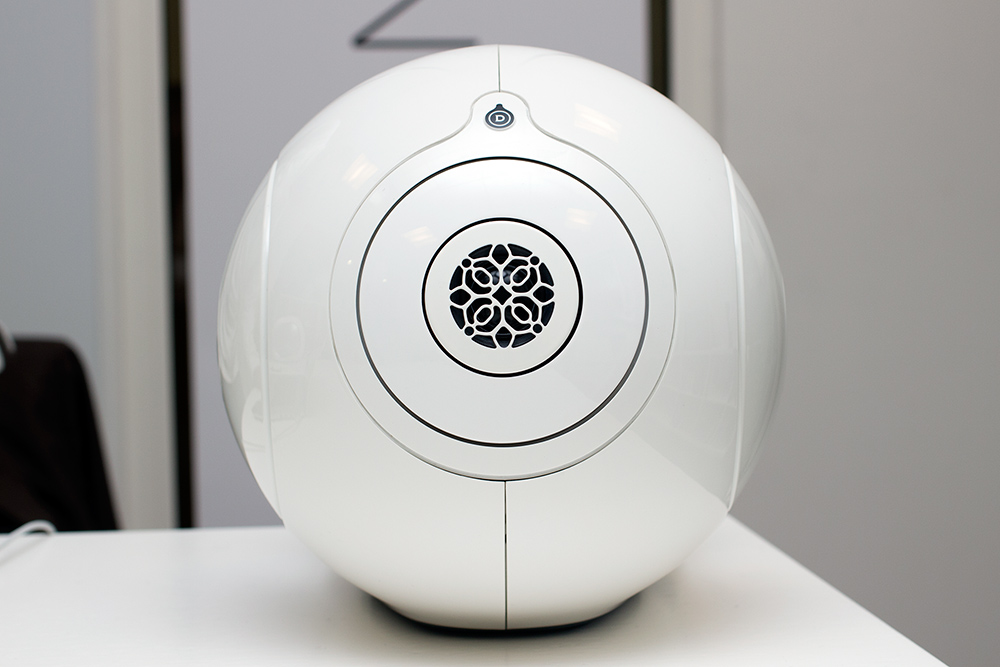 My eyes were immediately drawn to the rounded shape, which is ideal for a smooth, unobtrusive wavelaunch. Then they found the 1" tweeter nestled into the 5" midrange driver, which puts both drive units into the same acoustic space, allowing for consistent output in all directions. And finally I saw the side-mounted woofers, which are about 6" across and are not only placed in ideal proximity to the front two drivers, but also work to cancel cabinet vibrations since they fire from opposing sides. The drivers' diaphragms are made from aluminum. I also took note that the woofers and midrange diaphragms are convex, not concave like traditional drivers, and that the entire outer shell was made of some sort of composite material, which I found out is a mix of ABS and fiberglass.

The speaker's size is about that of the canister portion of my new LG vacuum, with a shape that's spherical when viewed from the front, but more or less oblong when looked at from the top. Underneath is a small rubber base, which allows for placement on a flat surface, but there's also a hook that, in conjunction with the rubber base, allows the speaker to be affixed to a special stand called Branch ($299). It's obvious from the unique appearance of, well, every part that makes up the Phantom (and Silver Phantom, explained below), that it's proprietary to Devialet. And, almost miraculously because of its reasonable price, it's made in France. 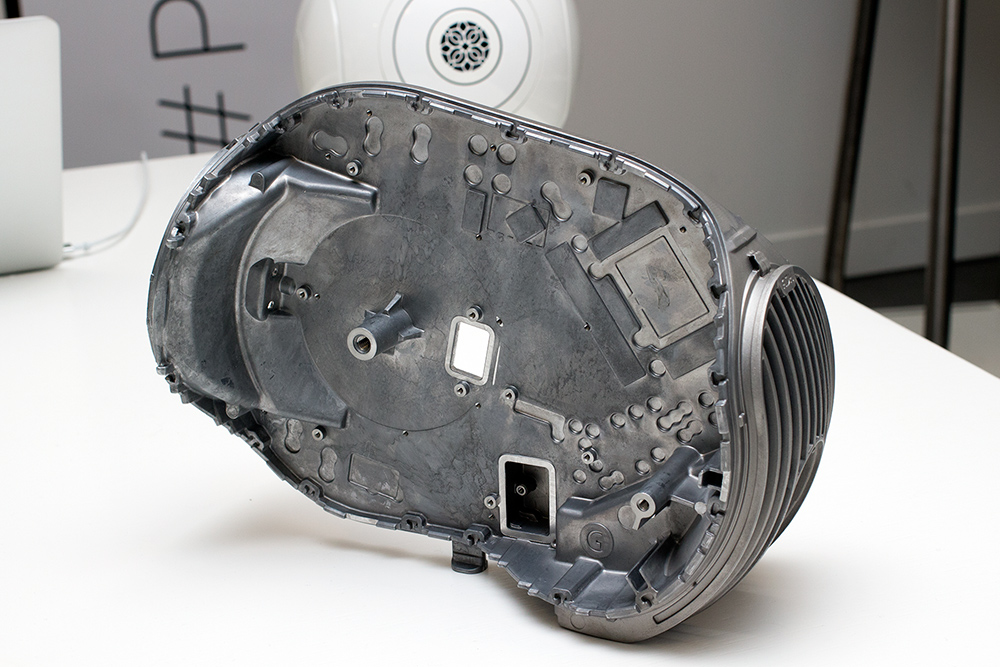 The only thing I couldn't figure out at first was how they could get any bass or significant output from such a small enclosure, since, acoustically, there's not enough volume inside for the drivers used -- at least for a conventional speaker design. That, though, is where the company's Analog Digital Hybrid (ADH) and digital signal processing (DSP) technologies come in. Basically, each speaker has eight ADH mono amplifier models mounted onto an aluminum centerpiece that not only holds the electronics, but also divides the internal portion of the enclosure in half. The eight amplifiers are bridged to create four mono amplifiers, with each one dedicated to a driver and able to deliver, when necessary, incredibly high power with complete control. It's these amplifiers that also account for why the Phantom will be priced at $1990 each in the United States when released, while the Silver Phantom will be $2390 each. Simply put, the Silver has more powerful and costly amps inside of it, which results in higher possible SPLs from the drivers (105dB in-room for the Silver Phantom, 99dB in-room for the Phantom). So if these speakers interest you, decide how loud you need to play your music to choose which will work best. 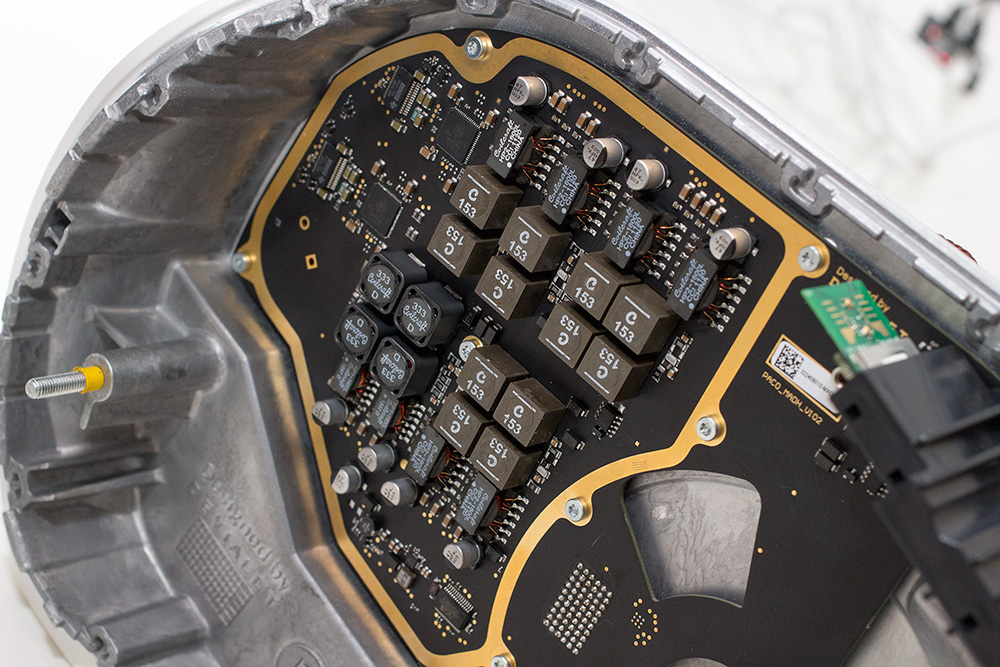 Also mounted on the aluminum centerpiece are the power-supply components, the class-D amplifier section, and the DSP electronics. It's the DSP component that acts as the brains of each loudspeaker, because it's where the crossover manipulation (250Hz for the woofers to the midrange, 2kHz for the midrange to the tweeter) and driver optimization are done with topflight precision. I was told that both Phantom models are flat to within +/-0.5dB across the audioband, and can reach right down to 20Hz with high output, which is simply not possible with a conventional loudspeaker of similar size.

The digital guts in each speaker allow it to receive incoming digital music signals via Wi-Fi, wired Ethernet, and powerline Ethernet simultaneously if all are configured. This is not only unique, but useful since the concurrent operation creates redundancy and, therefore, greatly reduces the chance for dropouts compared to just one digital connection. There's also an optical connector, allowing the speaker to receive a digital signal from a Blu-ray player or something similar. Not formally part of either Phantom, but designed to work in conjunction with them, is a forthcoming product called Dialog ($349), which is essentially a purpose-built computer designed specifically to stream music to Devialet's speakers over a network, without the need for a formal computer. Users can control Dialog and the speakers through an app that Devialet is finishing development on now. 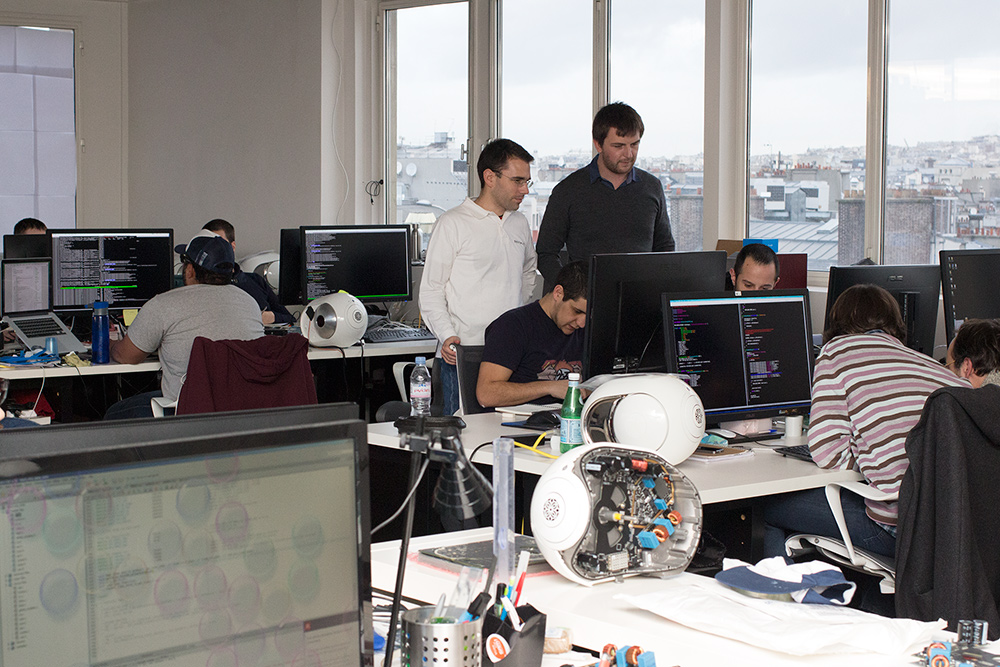 The software designers at work

Through programming, each Phantom or Silver Phantom becomes self-aware and can be told to act as a mono speaker, a left or right speaker in a stereo pair, or a center-channel or surround in a multichannel setup. Since the Phantoms have also been designed for multiroom use, individual or groups of speakers can also be programmed into zones. 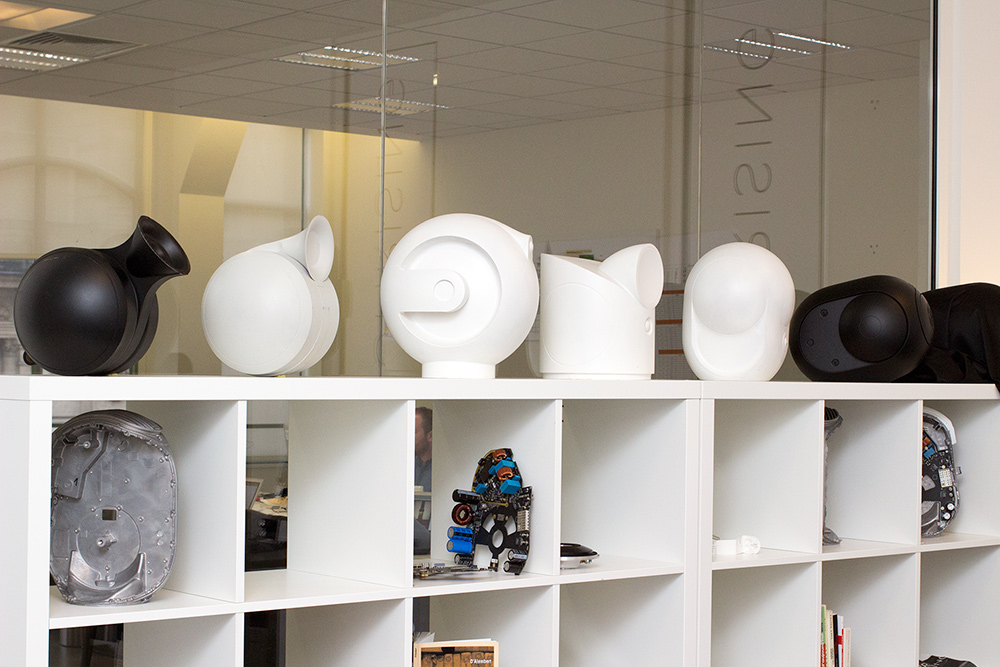 Now back to the shape that, as I mentioned, the company purportedly created primarily for acoustical purposes. To me, that's a good thing because it puts performance first. But it's also not what a typical loudspeaker looks like, so I believe that its unique shape will give the Phantom speakers the rare distinction of being able to generate as much controversy as, if not more than, Vivid Audio's Giya series, which feature equally odd cabinet shapes, and which were also designed with an acoustics first approach. 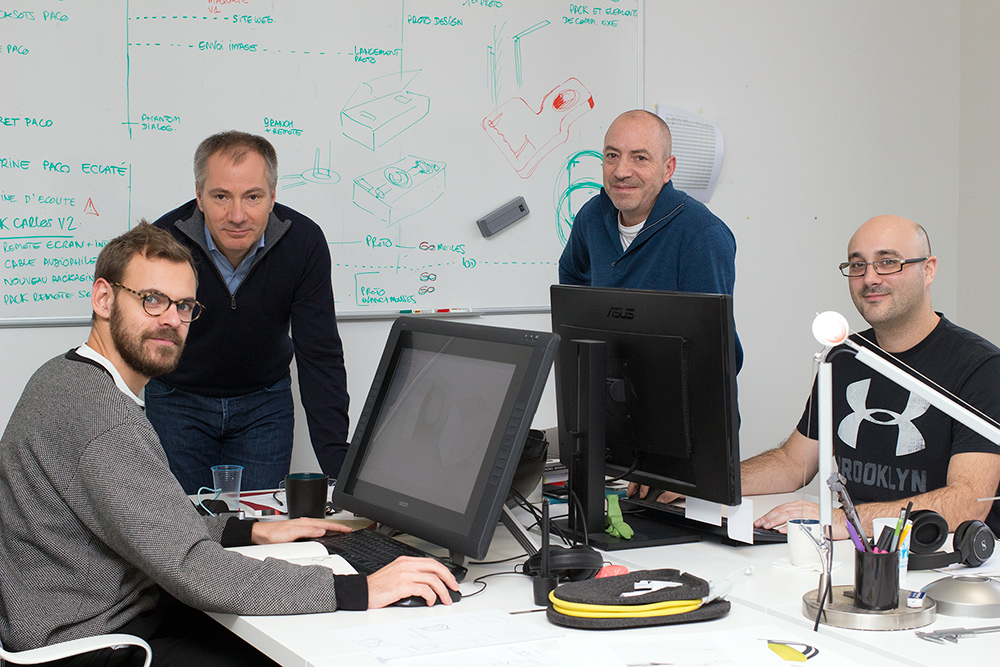 Therefore, as it is with Vivid Audio, some will love the look of the Phantom models, while others will hate them. In fact, some people might make fun of them, since they are so different. But will that hurt Devialet? Hardly. From the outset, with the debut of the D-Premier, Devialet has thrived on presenting something decidedly different from its competitors, both in terms of appearance and performance. And they've succeeded wildly in doing so, even if not everyone has accepted their choices. As a result, when Devialet set out to create loudspeakers as unique and ambitious as their amplifiers, the finished product was always destined to be far from ordinary -- and the Devialet team undoubtedly wouldn't have it any other way.