To say that I was impressed with the effort that went into designing the Devialet Phantom and Silver Phantom is as understated as saying Parisian fashion designers know a thing or two about making good-looking clothes. I was absolutely floored by the level of engineering that went into creating both Phantom designs -- acoustical, electrical, and mechanical. The company has gone all out in terms of industrial design, too. From what I could tell, it's left no stone unturned insofar as pushing forward the parameters of loudspeaker design -- or any expense, for that matter, since the effort, which took years, had to have cost a fortune. I was also impressed that the company is pushing forward with technologies that audiophiles have inexplicably resisted -- built-in amplification and digital signal processing, mostly -- because it's the smartest way to go if you're going to push the envelope. Still, the burning question for most audiophiles is: How does this Herculean exercise in audio engineering sound? 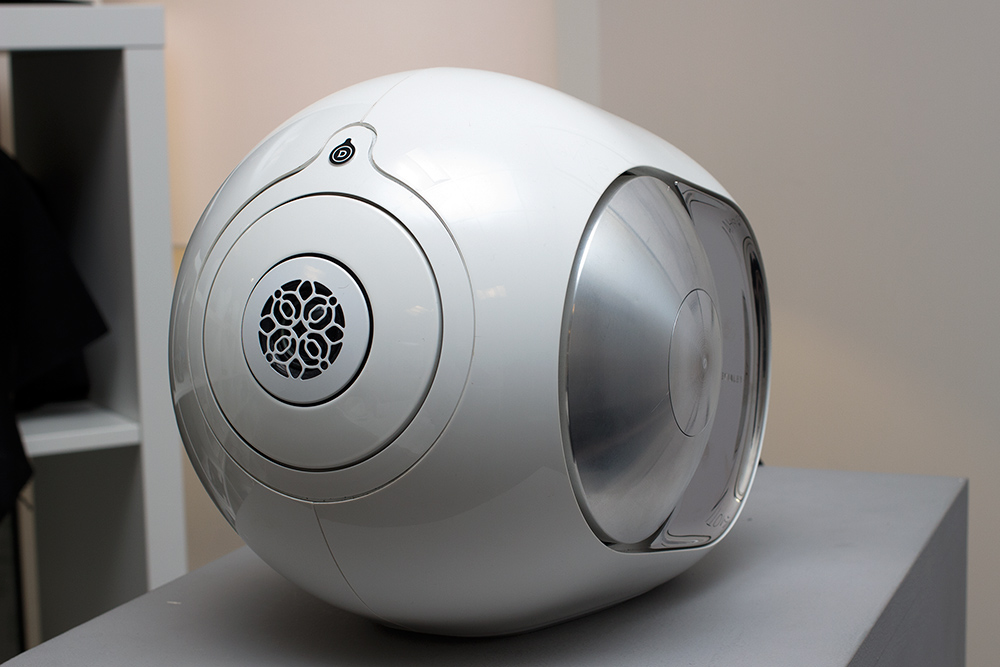 During my visit, I was able to audition the Phantom speakers three times, all different. The first time was in an office with a single Silver Phantom perched atop a platform -- so a mono setup. The signal came directly from an Apple MacBook Air computer via a USB-to-TosLink converter. The music, if you want to call it that, was a super-bass-heavy electronic-type composition that was played not just loud, but LOUD. I didn't realize just how loud until I tried talking to others in the room and found I almost had to shout. The first thing I thought was: Holy moly, that speaker can play loud, deep, and clean. The next thing was: Man, those woofers can move. If I had to guess, the woofers were displaying about 1/2" of excursion, which was actually pretty interesting to watch because viewed directly from the front, with the woofers thrusting back and forth, the Silver looked like some violently pulsating sphere from a sci-fi film. The other thing I noticed is that the speaker sounded far more spacious than any speaker should for mono, which I attribute mostly to its room-filling subwoofer-like bass output. I believe that Devialet put on this demo to prove that a single Silver Phantom can really put out sound. 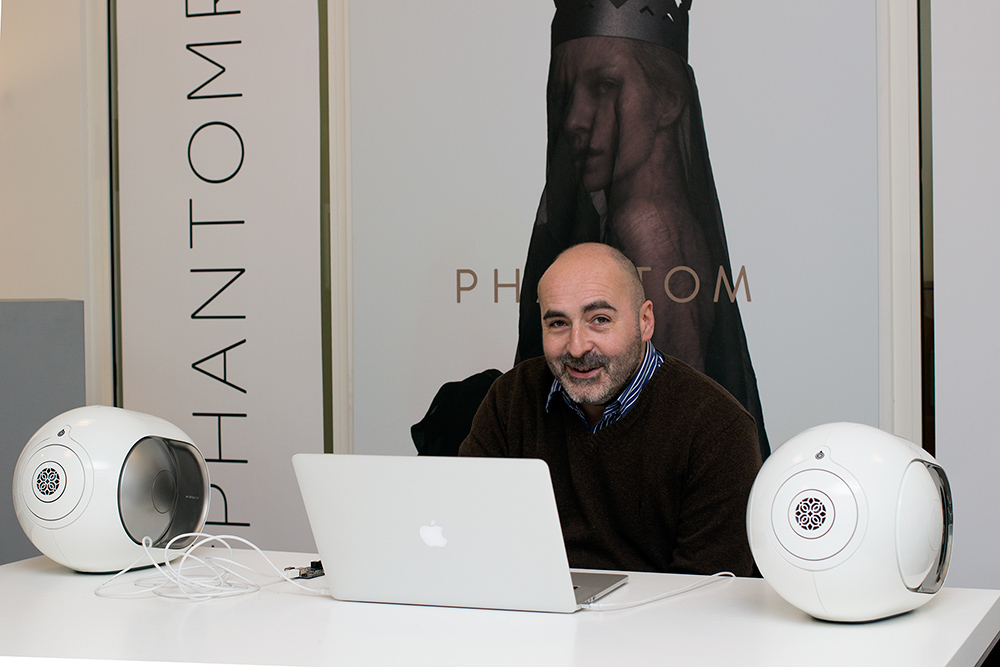 Next, the Silver Phantom was moved to the table with the MacBook Air, which already had a standard Phantom on it. Before the music played, however, I asked Manuel De La Fuente about having two differing speakers -- Phantom and Silver Phantom. "No problem," he said. "They both sound the same -- it's only how loud they can play." After that, he looked down and played the same electronic selection as before, followed by a couple more tracks. Since we were in the same room, the sound had pretty much the same character, but it had greater spaciousness because there were now two speakers instead of just one.

The third demonstration, which was in a listening room off of one of the design labs, was by far the most satisfying and informative for me. Two prototype Silver Phantoms were set up on either side of a large flatscreen TV, although the demo featured only music, not any movies. Acoustic designer Antoine Petroff was at the controls. The only downside to this setup was that they wouldn't let me take pictures of the room because they had a lot of proprietary equipment in there that they didn't want the world to see, which was understandable. The only things I could take pictures of were Antoine and an exploded view of a Phantom that was on the floor. 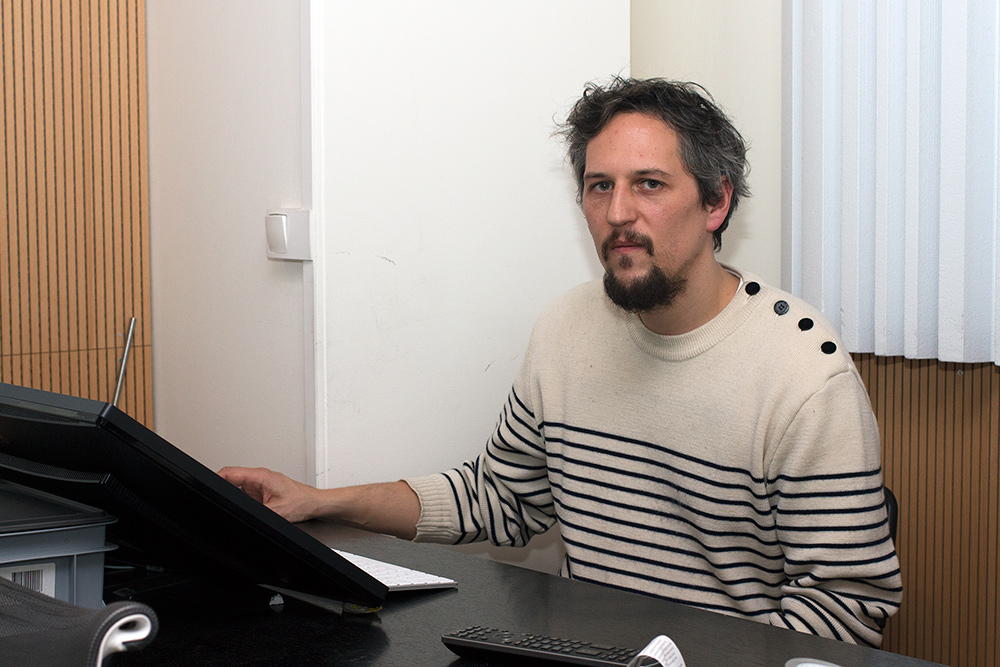 But I can tell you all about it -- including the "user interface," which I don't think has ever been implemented in a speaker before, at least to this extent. Yet I suspect that after others catch wind of the Phantom, the trend for interfaces might catch on for powered speakers. For example, since there are no lights on either Phantom model to indicate an on/off state, very light background music plays when the speaker is turned on -- it's programmed into the speaker itself. Then there's what happens when the remote control pairs with one or more Phantoms -- the woofers flex a few times, which is really cute and far more interesting than a beep or a light. There are other things the Phantoms do as well, but this should give you an idea that Devialet didn't design the Phantom models just for sound; ease of use was obviously part of the design criteria, too.

Ease of use also extends to upgrades, at least on the software side. If the network a speaker is running on is connected to the Internet (most are), the speaker will automatically "talk" to the Devialet site and download any updates, which is something that will probably happen because the company is already well known for providing updates to their amplifiers that improve the performance and features. What a cool feature! In fact, I shook my head and wondered why no one else had thought of that before. 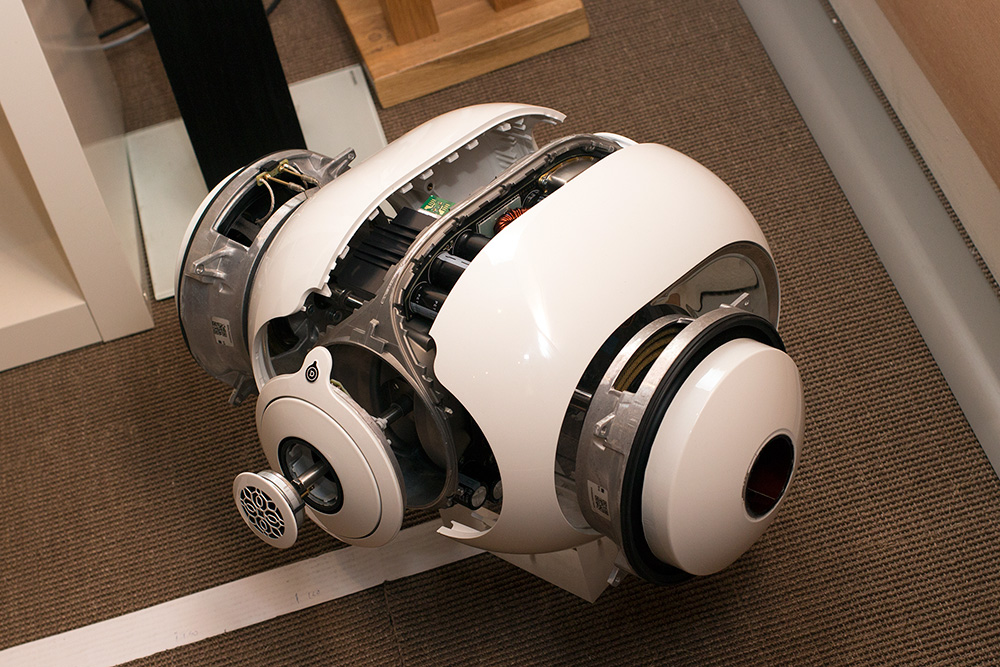 Once the music started, this system was by far the most telling in terms of performance. Although they were playing music unfamiliar to me, I was immediately struck by how solid and tangible the center vocal image was -- as rock solid and tangible as I've heard from the very best stereo system. The sense of space was also exceptional, which was likely due to the Phantom's excellent dispersion capabilities, but also because of the very deep bass it's capable of -- speakers that reach down toward 20Hz almost always recreate a greater sense of space than speakers that stop an octave or two above. Then there was the superb clarity and the complete lack of annoying, irritating distortion artifacts. Even at high volume levels, the speakers sounded as clean as the company's amps. So if you've ever heard their amps, then that should definitely pique your interest about looking into either one.

I had three demonstrations on that day at Devialet that were interesting, but it needs to be reiterated that they were brief and in unfamiliar surroundings, and with equally unfamiliar music. Still, there was certainly something to be said about what I heard -- the across-the-audioband clarity and the huge scale of the presentation, particularly the depth in the bass, were nothing short of awe-inspiring given the relatively small size of the enclosure. Obviously, more investigation into these speakers is needed, but if what I heard holds true in more familiar surroundings, and the features they've packed in work as seamlessly as intended, breakthrough wouldn't be too strong of a word for what Devialet has created with the Phantoms. As a matter of fact, it could change many things in the hi-fi industry and pave the way to something new on the speaker front -- and will likely have other manufacturers following suit.