This is the third straight year I’ve covered the Audio Video Show. One reason is that I thoroughly enjoy visiting Warsaw, Poland, where it’s held. I always arrive at least two days prior to acclimatize so I can hit the show running and keep my stamina all the way through, as well as take in the numerous attractions and restaurants around the city. Warsaw is a great place to have an audio show, as well as a great place to visit.

This year, with Jason Thorpe on the team, we decided to divide the coverage so we could focus on what we both enjoy the most. For me, that’s loudspeakers, which are in abundance here. Below you’ll find the most interesting ones we saw at PGE Narodowy (aka National Stadium) on the first day of the show. Prices are in Polish zloty (zł), euros (€), US dollars ($), or British pounds (£). 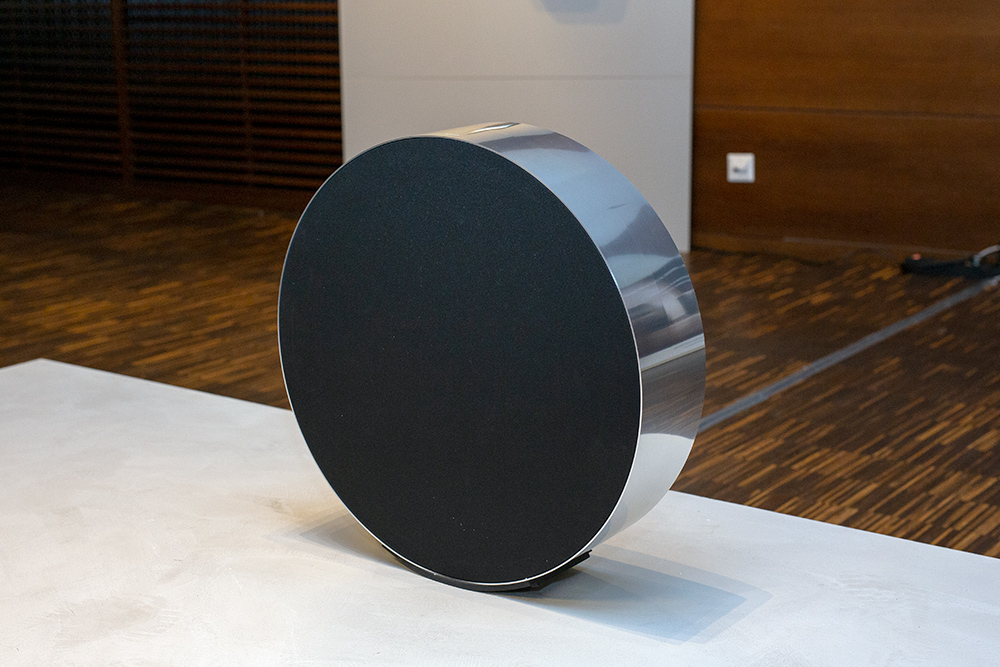 Here’s the brand-new Bang & Olufsen Beosound Edge, an all-in-one speaker and music streamer, meaning it, and only it, is needed to play music. Retailing for zł15,000, the Edge is quite large, nearly the size of a kick drum. Befitting B&O’s technological acumen, the Edge shows a fair bit of forward thinking, including the option to place it on the floor or . . . 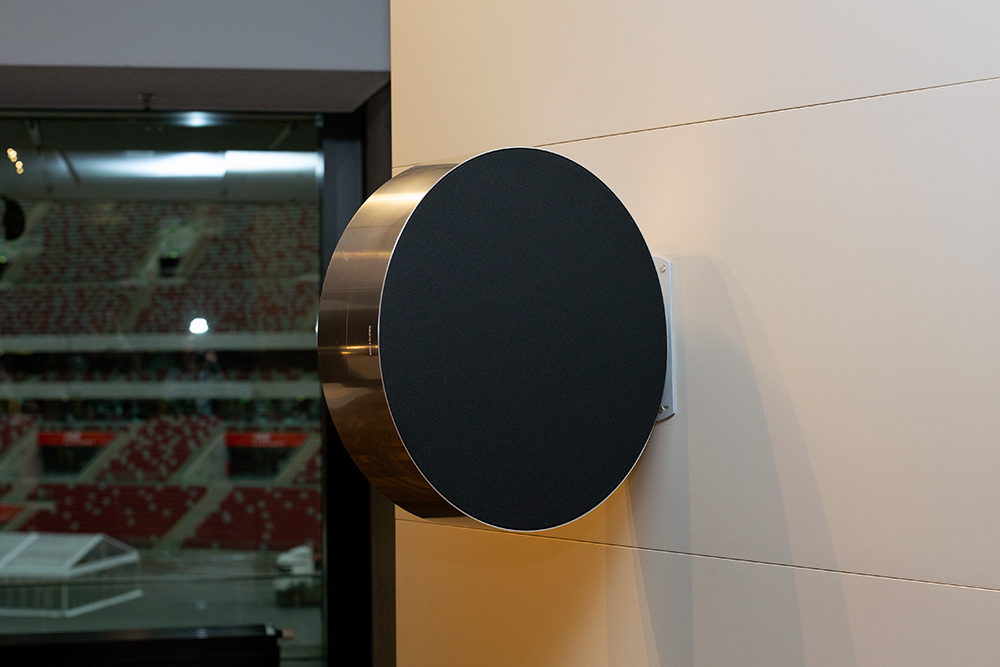 . . . mount it to a wall. The volume control is particularly charming, as you simply roll the whole thing along the ground or on the wall -- one way turns the volume up; the other way down. The Edge is . . . 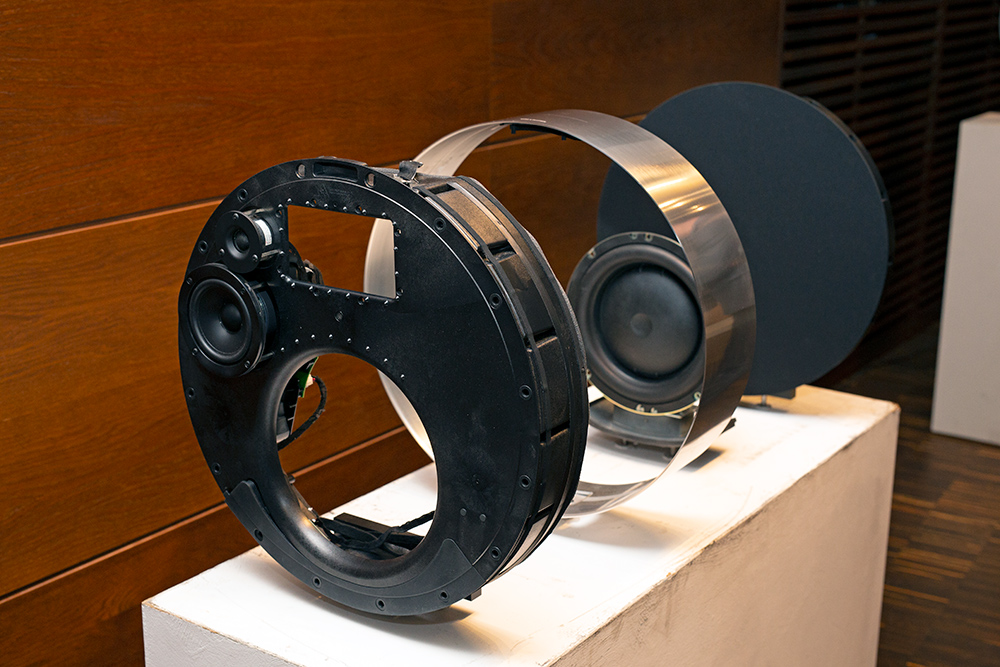 . . . dual-sided, so you can use it as a sort of audio room divider, and you can control which direction you want it to radiate -- left, right, or both sides at the same time. To accomplish this, B&O uses a single center-mounted woofer that radiates to the front and rear, as well as two tweeter-midrange arrays, mounted front and rear, that can be turned on or off independently. There’s a lot more going on here, including an active bass port that changes its tuning based on the volume level. When the speaker plays at low volumes, the port stays closed. But as the volume ramps up, the port opens! 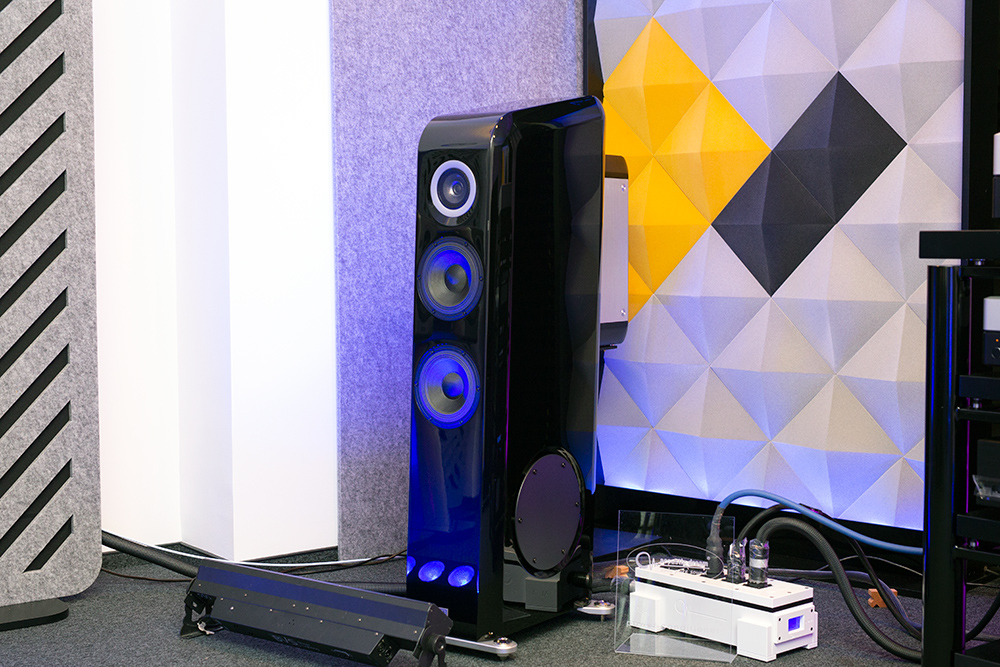 TAD -- Technical Audio Devices -- out of Tokyo, Japan, debuted the new E1TX speaker, a three-way floorstander with beryllium diaphragms for the midrange and tweeter, which are mounted in a coaxial array. What we thought were drivers on the sides are actually circular, slotted ports, shaped to disperse the airflow in all directions with minimal turbulence. The price for the E1TX hasn’t officially been set, but it’s expected to come in at around €25,000 per pair. 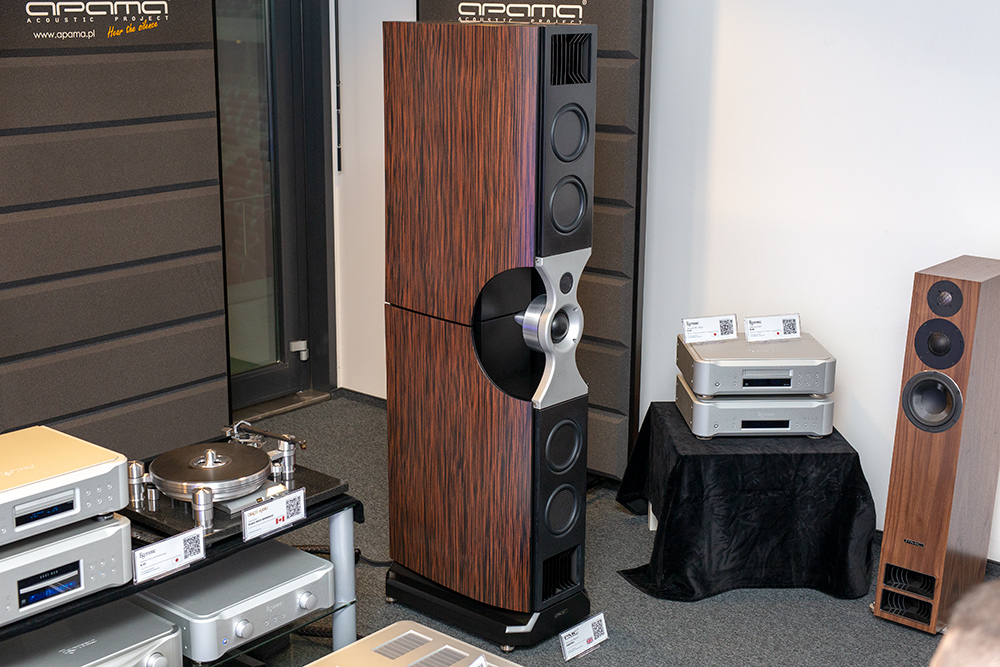 Also showing in Warsaw was the futuristic-looking PMC Fact Fenestria speaker. Tallying up at zł240,000 per pair, this three-way transmission-line design features a 75mm soft-dome midrange, six 165mm flat-piston carbon-fiber woofers mounted in two transmission-line enclosures, and a 19mm SEAS silk-dome tweeter. As with all PMC speakers, the Fact Fenestria digs down deep -- they claim it can play down to 23Hz. The cabinet is tricky too, with . . . 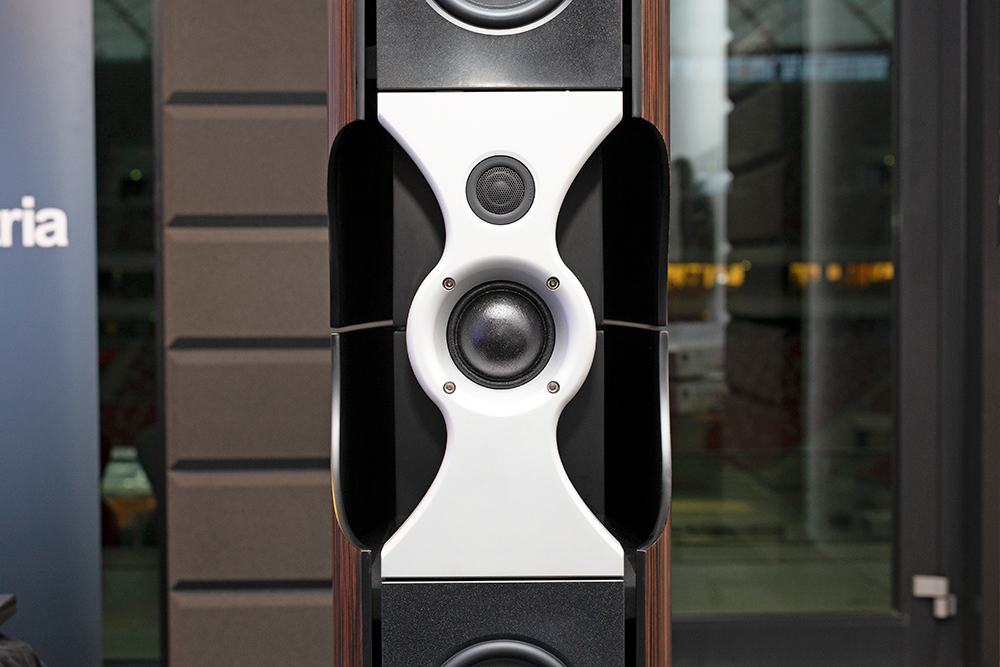 . . . floating planar wings wrapping around the side to cancel out resonances, as well as . . . 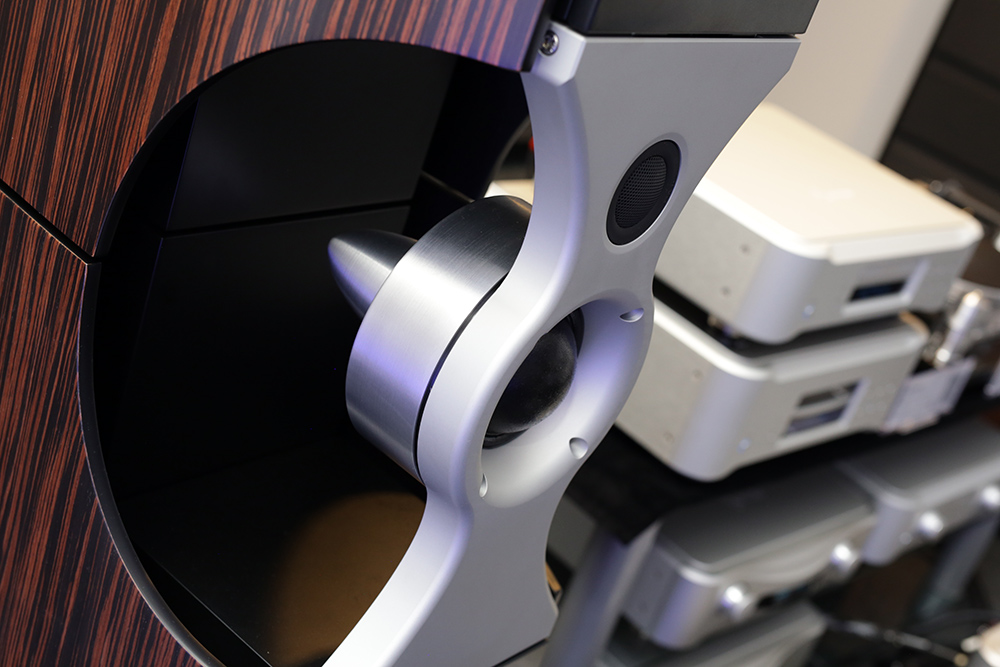 . . . a unique mounting system for the tweeter and the midrange that basically decouples those drivers from the rest of the enclosure. 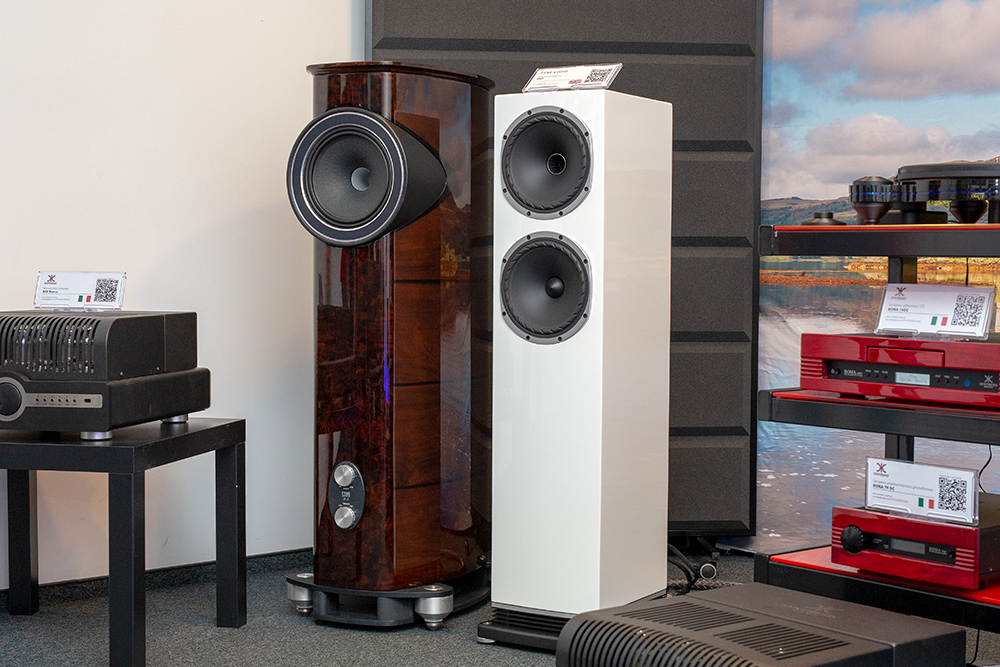 Fyne Audio, of Scotland, is a fairly new company formed in January 2016 by a number of ex-Tannoy employees -- so there are a lot of similarities in their new speakers compared to their old employer’s. In that tradition, Fyne Audio’s speakers are built around what the company describes as the Iso Flare driver, which mounts the tweeter in the throat of a large woofer. Fyne Audio had two new speakers on hand, the sculpted-looking F1-10 (left), for zł92,000 per pair, and the more conventional-looking (i.e., boxy) F502, for zł7000 per pair. The F1-10 looked lovingly veneered, with rich walnut woodgrain sides and a delicious walnut burl front panel. The much more reasonable F502, shown here in a glossy white finish, also employs an Iso Flare driver, but is notable for . . . 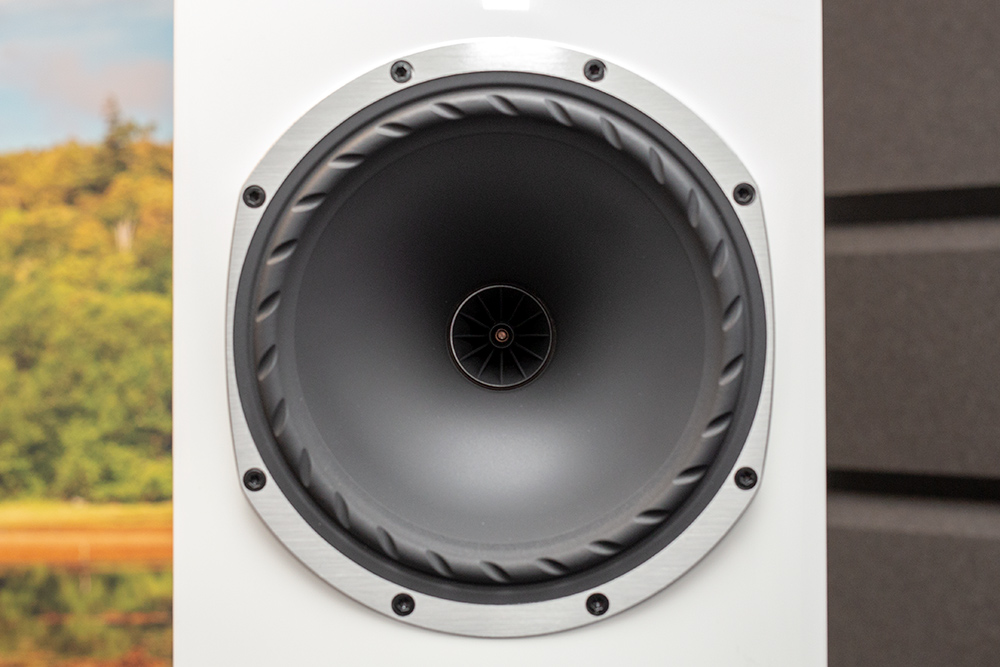 . . . the dimples on the woofer surrounds, which the company says break up standing waves. While Fyne Audio’s factory in Scotland manufactures the drivers and assembles the speakers, the cabinets are built in Poland. 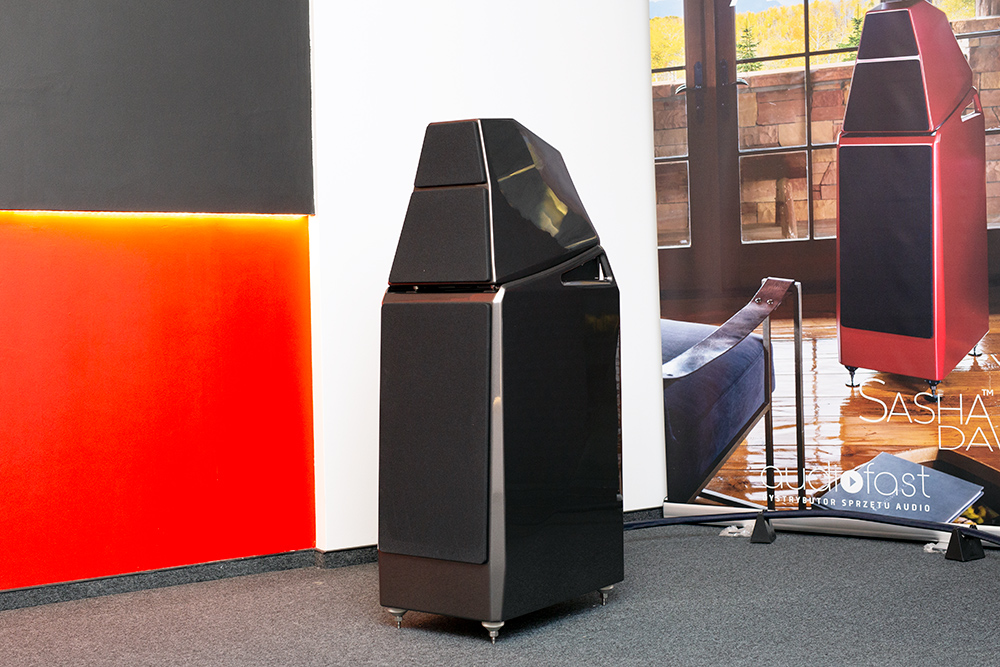 Wilson Audio created the new Sasha DAW to honor the company’s founder, David Andrew Wilson, who passed away in May. With a look that harks back to the company’s WATT/Puppy series of loudspeakers -- its most famous -- the Sasha DAW is a three-way, four-driver design with a 1" soft-dome tweeter, a 7" midrange driver, and two 8" woofers. All drivers are said to be based on ones used in the company’s more expensive models. The speaker, which weighs 236 pounds, comes in two parts: a bass module, which holds the woofers, and a tweeter-midrange module, which can be adjusted based on the listening position height and distance. Sensitivity is said to be 91dB (1W/m at 1kHz), while impedance is said to be 4 ohms, with a 2.58-ohm minimum. The price for the Sasha DAW is $37,900 per pair, and it begins shipping this month.