The first thing I did on November 16 was sit through an Audio Video Show 2018 press conference conducted in Polish. I didn’t get the jokes and the banter. As a Canadian, I’m used to getting the gist of languages I understand only a little, but I’m completely out of the loop here in Warsaw.

As soon as the conference was over, I left to take in this huge show. Doug Schneider and I started at the PGE Narodowy stadium, where the bulk of the Audio Video Show 2018 exhibits are located. Two other hotels are involved: the Radisson Blu Sobieski, which seemed to have roughly as many exhibits as the entire Montreal Audio Fest, and the nearby Golden Tulip, with a single floor of exhibits. There’s a staggering total of 174 discrete rooms that we’re going to attempt to cover over three days.

My first focus was where my heart is -- the analog world, and turntables in particular, which Doug assured me I’ll find in profusion -- though I’ll be covering other stuff as well. Stand by; I’m going in. Prices are in Polish zloty (zł), euros (€), US dollars ($), or British pounds (£).

As I ascended the final set of escalators to the exhibition levels, I bumped right into the Pro-Ject display, and the first thing I saw was a large water tank with a submerged Beatles Yellow Submarine turntable. This limited-edition ’table is far from new, but it’s very cool, fun, and forward-looking. I hope it sets the tone for the rest of the show. 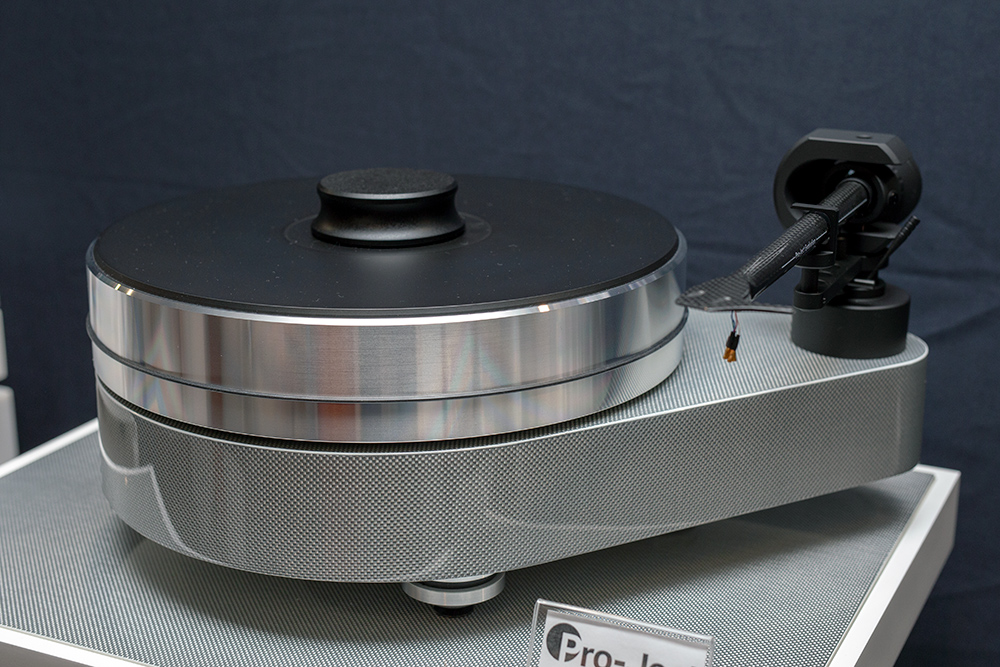 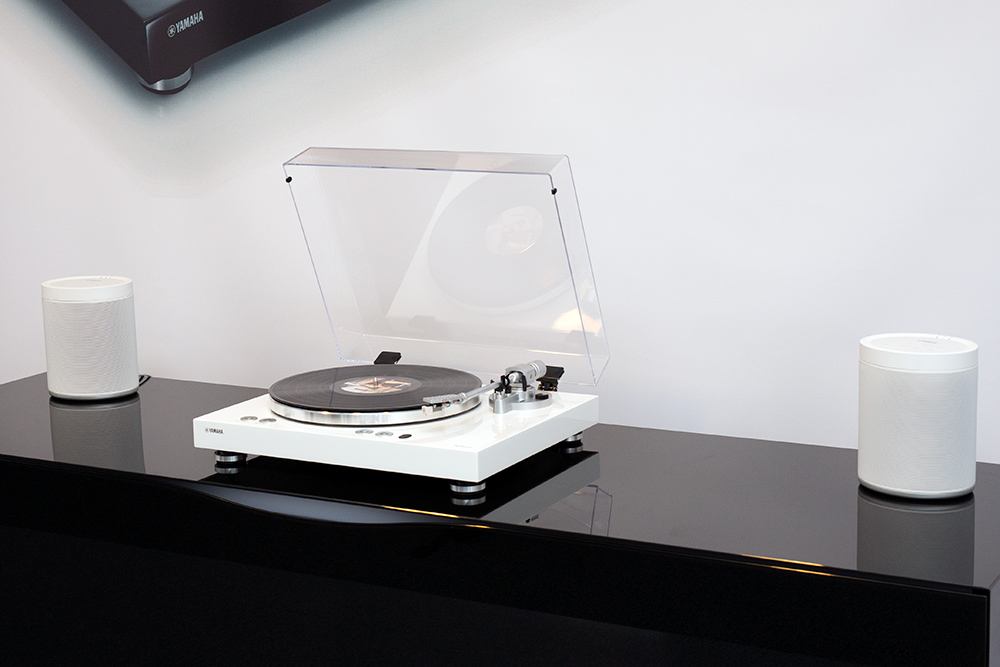 From the Pro-Ject symphony in mass-loaded aluminum and carbon fiber, I next turned to Yamaha’s nimble MusicCast Vinyl 500 turntable (zł2799). This all-in-one solution broadcasts an audio signal via Wi-Fi to any of Yamaha’s MusicCast receivers and speakers, including the MusicCast 20 wireless speakers (zł1149 each). There’s also a MusicCast Sub 100 for zł2299. It’s really designed to be a complete system. But on its own, the MusicCast Vinyl 500 can be used as a conventional source component, since it has a built-in phono stage, and can connect wirelessly via Bluetooth to any compatible device. 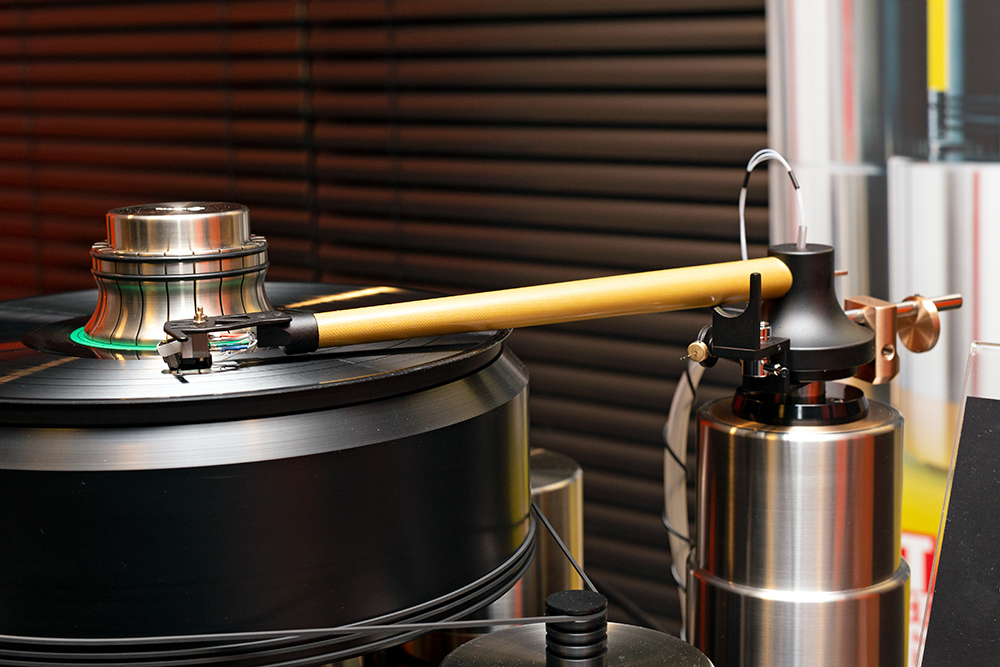 Turntable manufacturer J.Sikora, of Lublin, Poland, showed its totally new Kevlar 12" unipivot tonearm. The arm is so new that the price has yet to be decided. The one-piece Kevlar arm tube weighs only 15 grams, and, from what I could tell, seems exceptionally stiff and light. There are two bronze weights around back -- one for adjusting azimuth and the second for setting the tracking weight. 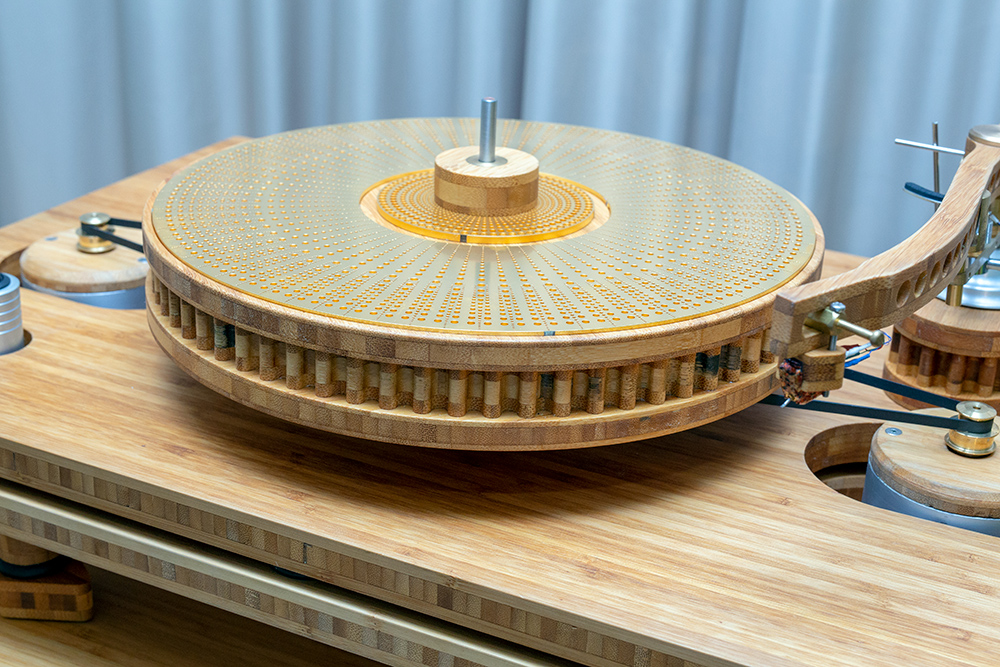 Back over at the Radisson Blu Sobieski, I found a boatload more analog gear, starting with our fellow Canadians Tri-Art. Wading through an entire hotel room of bamboo laminate, I found the B-Series turntable with its natty new platter and mat. The platter comprises three 1/2" layers of bamboo plus six layers of copper and epoxy, and it’s topped with 18-karat gold plating. The B-Series turntable retails for €3450, and the Reference platter and mat add another €500. 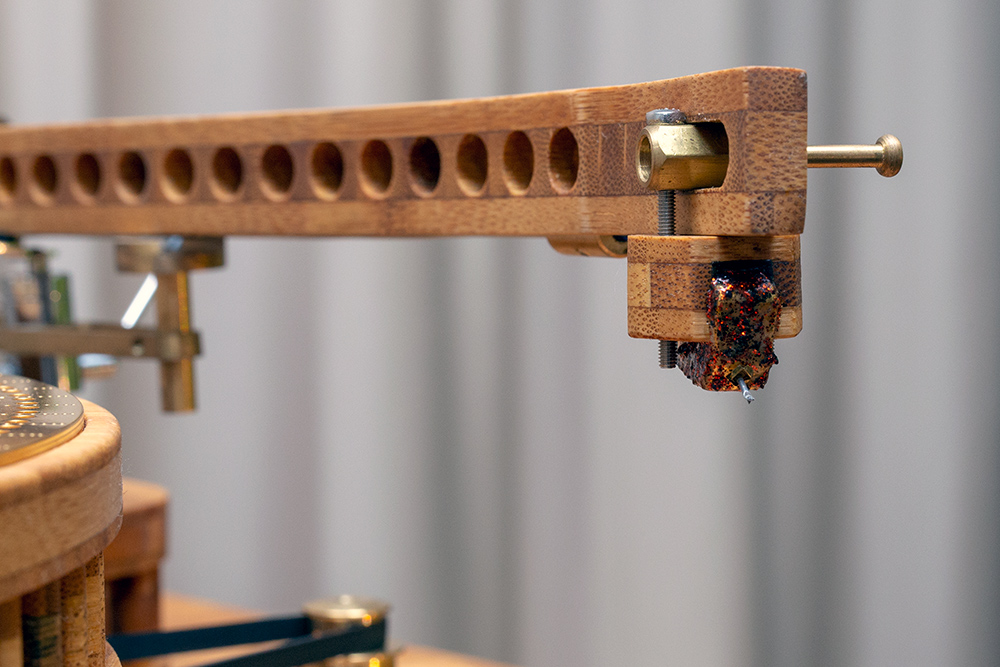 Also new from Tri-Art is its P-Series cartridge, which is a moving-magnet design with -- surprise -- a bamboo body, but with nepheline and mica coatings. The price hasn’t been announced, but it should come in somewhere around €500. 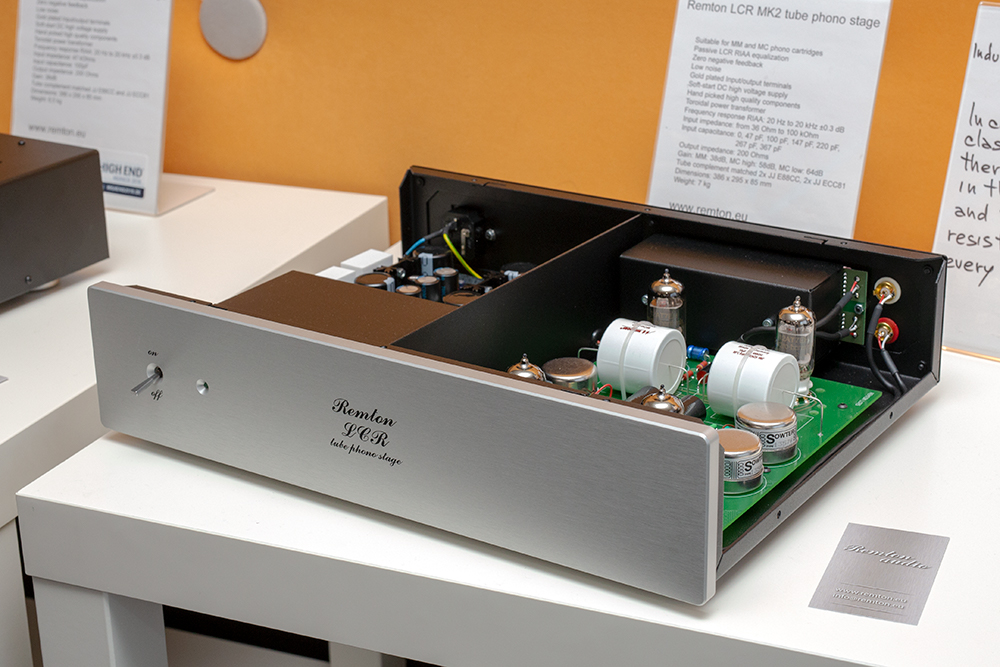 Hailing from the Czech Republic, Remton showed its LCR MK2 tube phono stage. RIAA is performed passively, and the gain stages are run via two E88CC and two ECC81 tubes. Remton had the lid off the LCR MK2, and the tube stage was beautifully laid out. The price of €3960 seems quite reasonable. 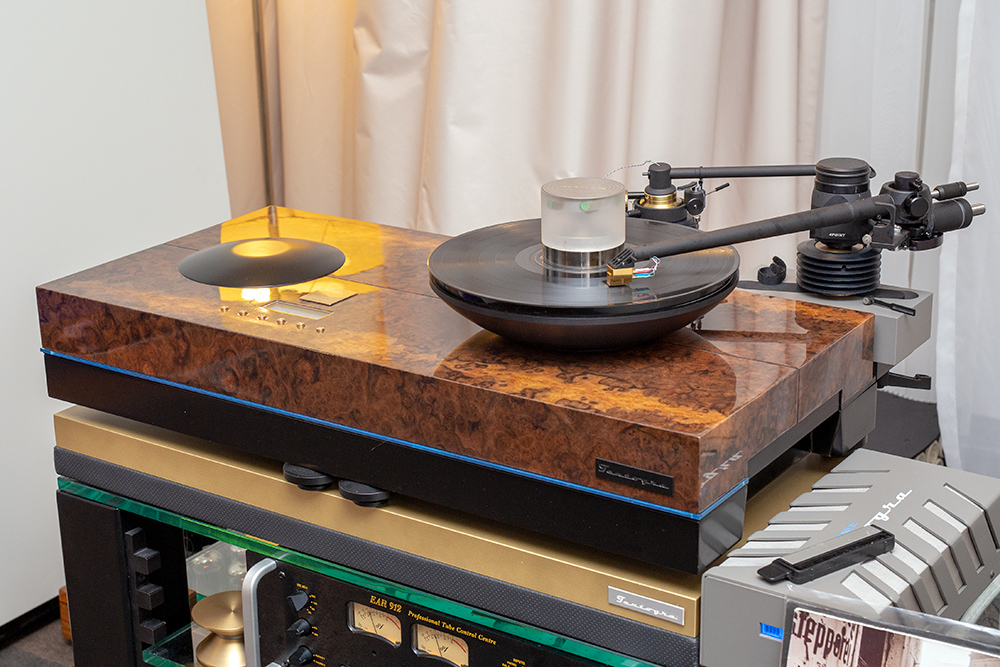 Are you ready for an off-the-chart value? Quick! Buy a Tentogra Oscar turntable before the company finds a distributor and triples the price. Tentogra hails from Ksawerów, Poland, but I have no doubt you’ll be hearing about the company soon. The Oscar starts off with an aluminum platter and a chassis that can accommodate two tonearms. The power supply runs off a battery for 60 hours, at which point it needs to be plugged into AC power and will recharge in five hours. However, you can still use the ’table while it’s charging. The motor is DC-powered, which makes sense. The plinth is made from a solid, very thick slab of walnut in a beautiful gloss finish. The company is working on its own tonearm, but the Oscar comes with a Kuzma arm for now. The sturdy and elegant stand on which the Oscar was displayed is included in the purchase price. Get ready -- the Oscar with all this good stuff retails for €9000. 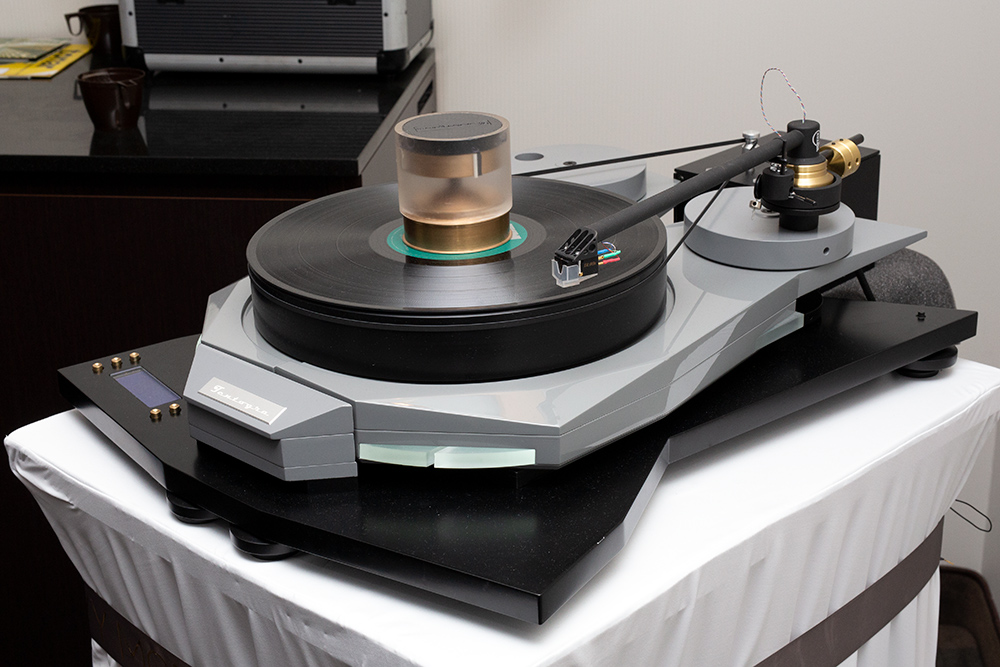 While the Oscar was performing demo duties, Tentogra also had on hand a prototype of its Gramy turntable, which will retail for €4000. The Gramy is machined from solid aluminum; two types of aluminum are employed to help disperse resonances. The substantial clamps on both models are made from a combination of bronze, acrylic, and ceramic. 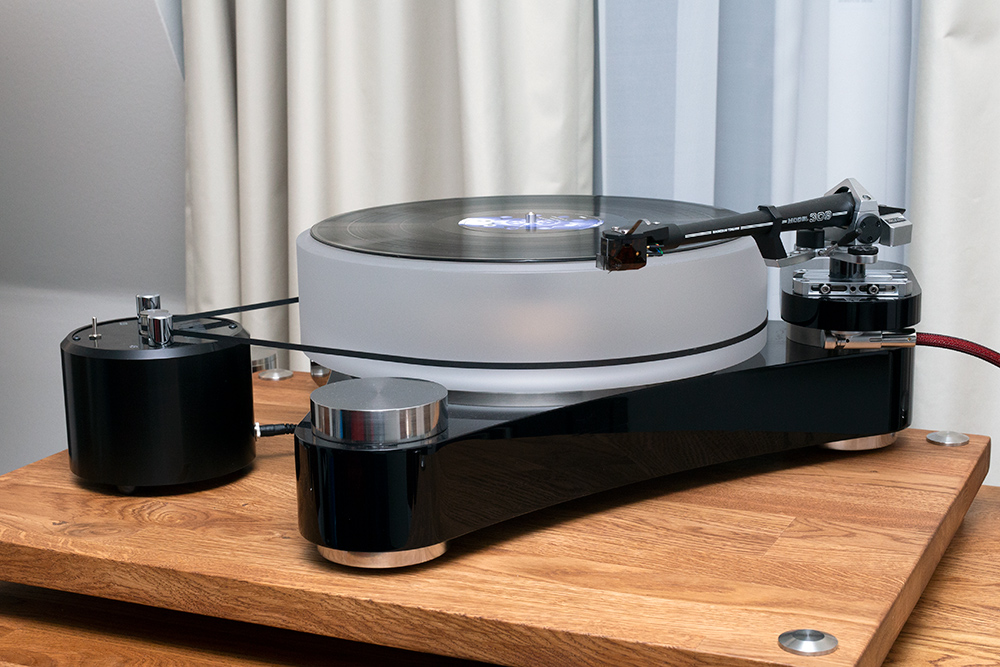 Scheu, out of Berlin, Germany, premiered its Das Laufwerk No.2 turntable, which retails for €6250 without a tonearm -- but you might not want to buy just one for it, since it can handle up to three. According to Ulla Scheu, the Das Laufwerk No.2 is built around a black acrylic chassis reinforced with a steel disc underneath the platter. The platter is an 80mm-thick slice of frosted acrylic. The DC motor has a wall-wart power supply. There’s also a version with a slate chassis available for €8900. All in all, this turntable seems like another exceptional value.