There’s a planted, landed feeling of comfort that I acquire at shows, and it’s directly associated with the various hotel lobby bars. At the Montréal Audio Fest, it’s the brutalist architecture and excellent club sandwich in the Hotel Bonaventure Montréal. Back in my CES days, I acquired my center when I saw the same crusty bartender pouring my morning coffee at the now-demolished, where-bums-go-to-die San Remo Hotel.

And here in Warsaw, for Audio Video Show 2019, it’s the pierogies in -- yes -- the lobby bar at the Radisson Blu Sobieski Hotel. These aren’t just any pierogies, mind you. These are plump, slightly browned pockets of juicy goose meat, with a side of tangy sauerkraut and sour cream. While they’re billed as appetizers, the four of them that come on a small plate are extremely filling, and really hit the spot as we sit in that bar writing into the wee hours. 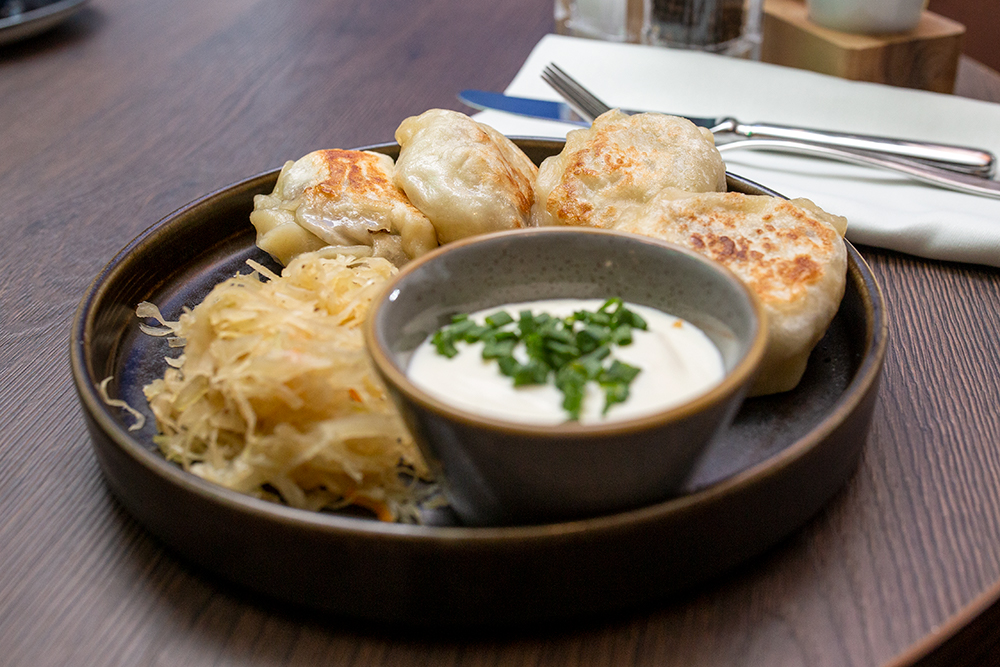 But that’s my business, not yours. We’re here to talk about some of the extremely cool electronics I saw on my first day here at this year’s Audio Video Show, which is held in three venues: the Radisson Blu Sobieski; the Golden Tulip Hotel, which is basically a hop and skip down the street; and the PGE Narodowy sports stadium, more or less across town. All prices are shown in Polish zlotys (zł) or euros (€). (Currently, the zloty trades at approximately USD$0.26. Note that prices in Europe typically include value-added tax, which in Poland is 23%.)

Doug Schneider and I split our first day between the second floor (called floor 1) at the RBS hotel, the lobby, and then the PGE Narodowy stadium. The RBS is more conducive to finding new products from specialty manufacturers, as the rooms tend to be hosted by the manufacturers themselves rather than the larger distributors we encountered over at the PGE Narodowy. 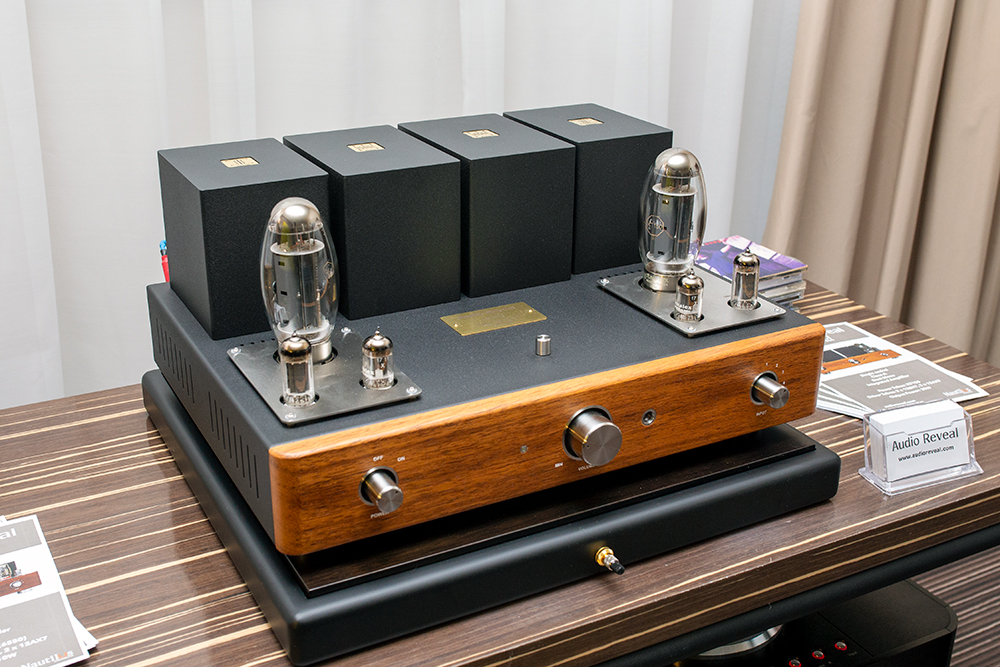 Right off the hop we discovered Audio Reveal’s new integrated amplifier, modestly named Second (yes, there is already a First). This amp is a beautifully constructed single-ended, class-A design that employs one KT150 tube per channel for a reasonable 20W each side. Driver tubes are two 12BH7s and two 12AX7s.

The Second is dual mono, with two power transformers and two output transformers. What’s interesting about this amplifier is that you can select between two feedback settings in order to help tailor the sound to your liking. The volume control is motorized in order to enable remote control. The Second is manufactured right here in Warsaw, and it retails for zł30,000. 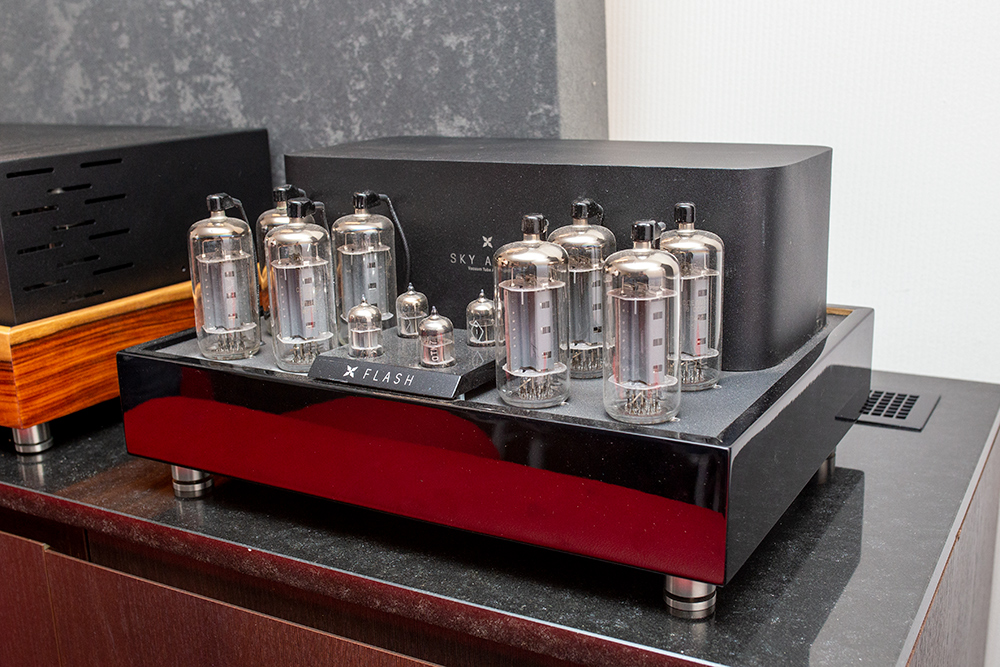 While the Sky Audio OTL Flash amplifier isn’t strictly new -- it was shown at the 2018 Audio Video Show -- this is the first year we’ve seen it in a complete, production-ready state and with a price tag of zł20,000. This output-transformerless (OTL) monoblock design is notable for the ability to absorb the complete failure of a tube without compromising the signal or damaging the speakers. Each Flash mono amp outputs 120W.

Sky Audio doesn’t currently have a distributor outside of Poland, so you might have trouble locating a Flash, but if they manage to get out of the country, it looks well worth checking out. 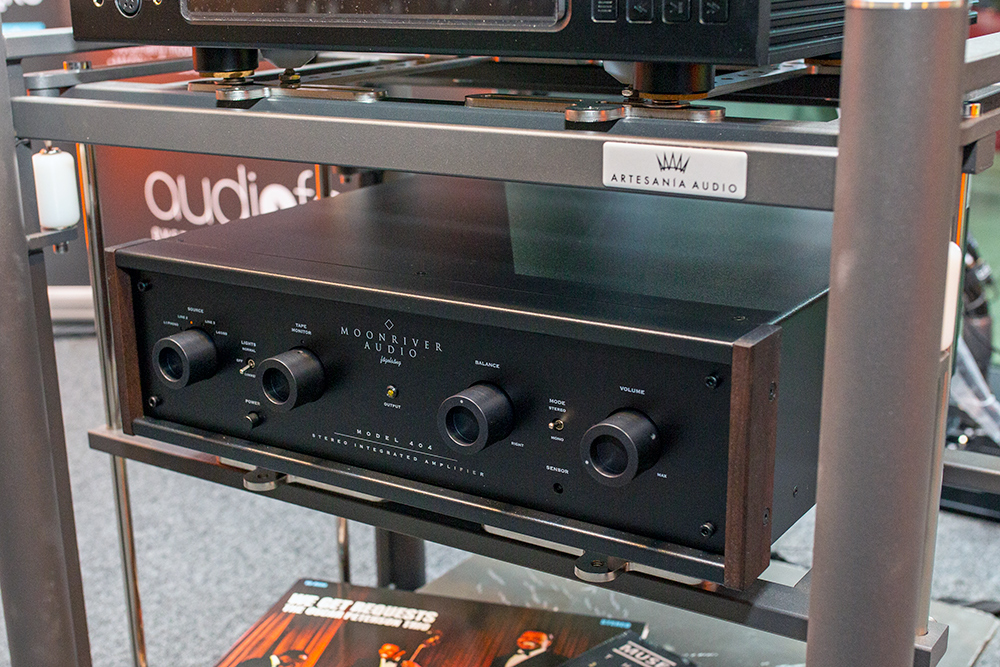 Here’s a brand-new Swedish product that doesn’t look like it rolled out of an IKEA warehouse. The dark and mysterious Moonriver Audio Model 404 integrated amplifier is an ambitious design that attempts to refine the integrated amplifier concept into a modular architecture. The core of the design is a 50Wpc class-AB amplifier with five separate power supplies and a discrete preamp section. At €3000, the Model 404 seems like a fair bit of gear for the price, and its modularity allows for the addition of a DAC section for €580, as well as a phono section with two options to choose from: moving magnet only, for €290, or moving magnet and moving coil, for €480. 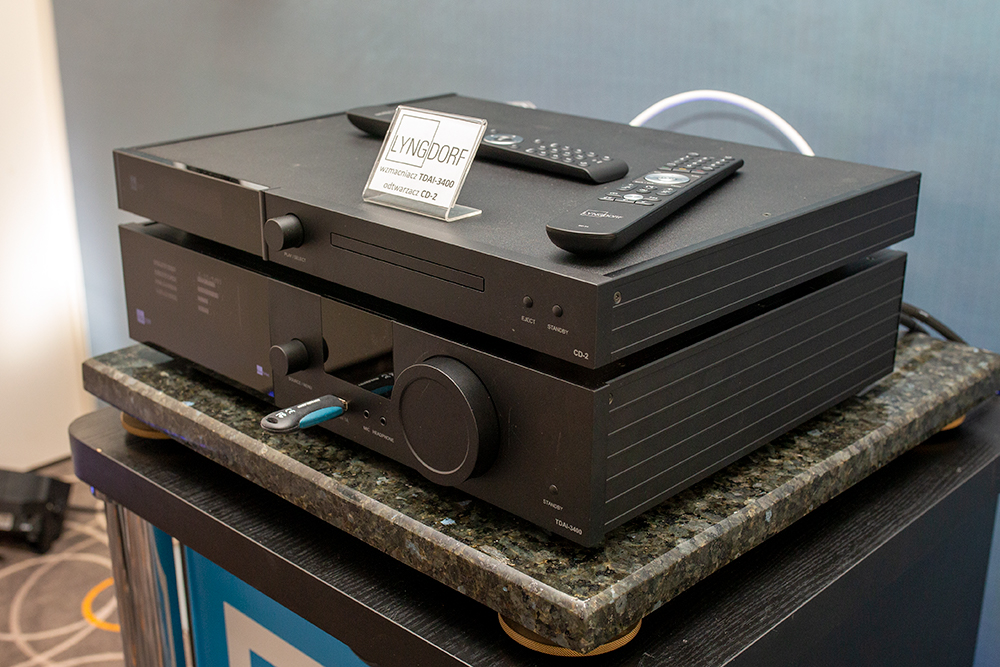 When Peter Lyngdorf, of Lyngdorf Audio, began to pepper me with the capabilities and functionality of his company’s TDAI-3400 (bottom component in photo), I quite literally became dizzy and had to sit down. Lyngdorf describes the TDAI-3400 as a “power DAC” -- based on pulse width modulation (PWM) amplifier technology, the moment the bits are converted to analog, the power output is enough to drive the speakers directly. But don’t think it’s a wimpy little amplifier -- power output is rated at 200Wpc into 8 ohms or 400Wpc into 4 ohms. What’s more, there’s no volume attenuation; instead, the volume control simply shifts the voltage of the PWM amplifier’s power supply, with the resulting benefits being no degradation in sound quality and an extraordinarily high signal-to-noise ratio of 137dB.

The TDAI-3400 is Roon Ready, streaming capable, and equipped with Lyngdorf’s RoomPerfect room-correction, which not only corrects for anomalies in the room but also makes subwoofer integration through the subwoofer outputs much easier. Lyngdorf also made the point that the TDAI-3400’s DAC compensates for inter-sample distortion, which is becoming more common in digital recordings due to the highly compressed nature of modern music. The TDAI-3400 starts at €5000 and increases depending on DAC and input configurations. 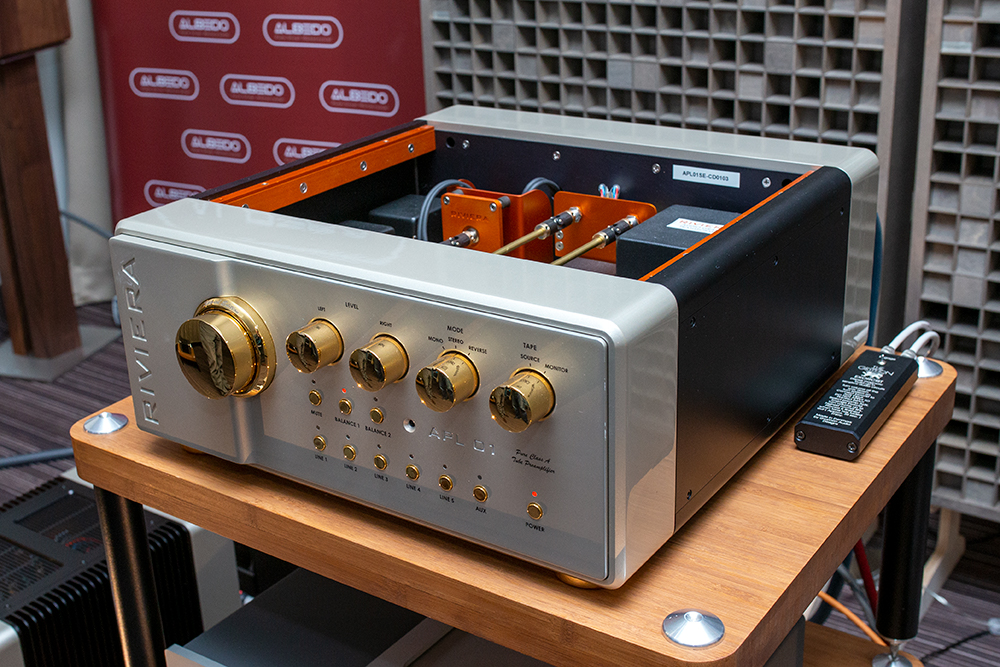 Doug and I were both blown away by the Riviera Audio Labs APL-01 Special Edition preamplifier. This conventional all-tube preamp is transformer-coupled both at the inputs and the outputs, and it features both single-ended and balanced connections. Nothing revolutionary here, but the quality of the finish and the obvious care that went into the construction of the APL-01 Special Edition made both of us take a good, long look at it as we sucked air in through our teeth. 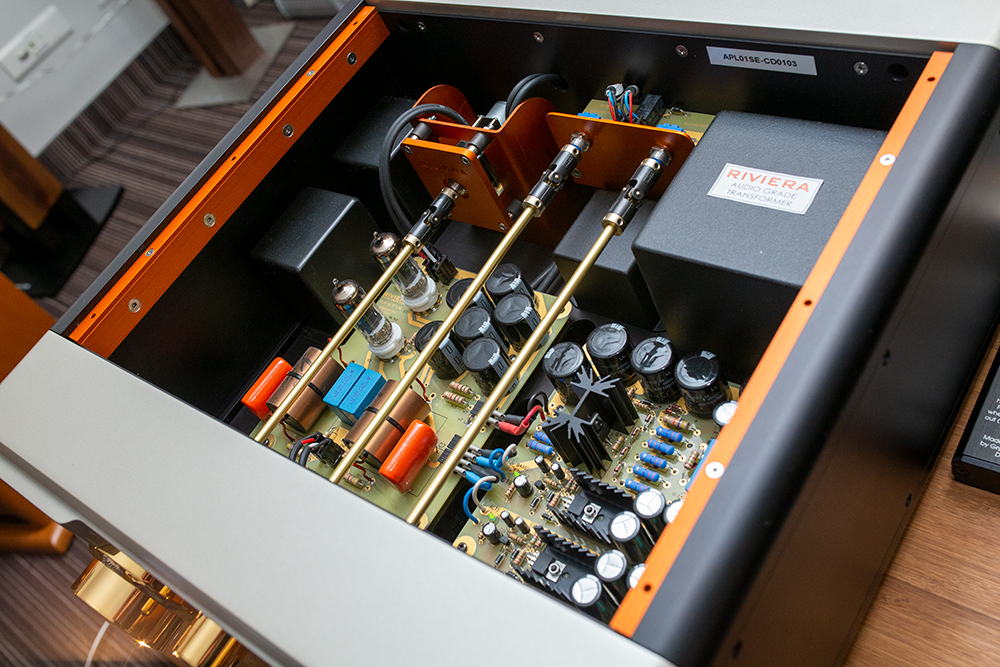 Riviera Audio Labs is an Italian company, and its origin is possibly responsible for the elegance of this preamplifier. The APL-01 Special Edition retails for €32,000, and its appearance and build quality alone seem to justify that price. 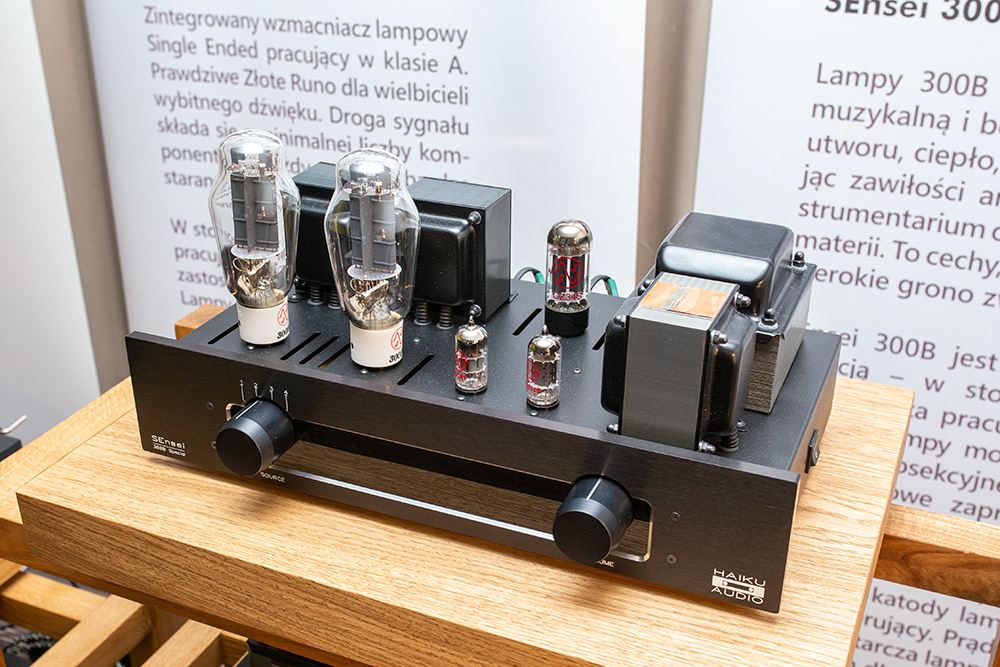 Hailing from Krakow, Poland, Haiku Audio had two new products on hand. The first, the SEnsei 300B integrated amplifier, uses, as the name indicates, one 300B tube per channel for 7Wpc of power. The SEnsei 300B employs a complex output transformer configuration and is driven by an ECC81 and ECC82 tube on the input stage. The power supply is tubed, and the wiring is point to point, as God intended. The SEnsei 300B retails for zł16,500. 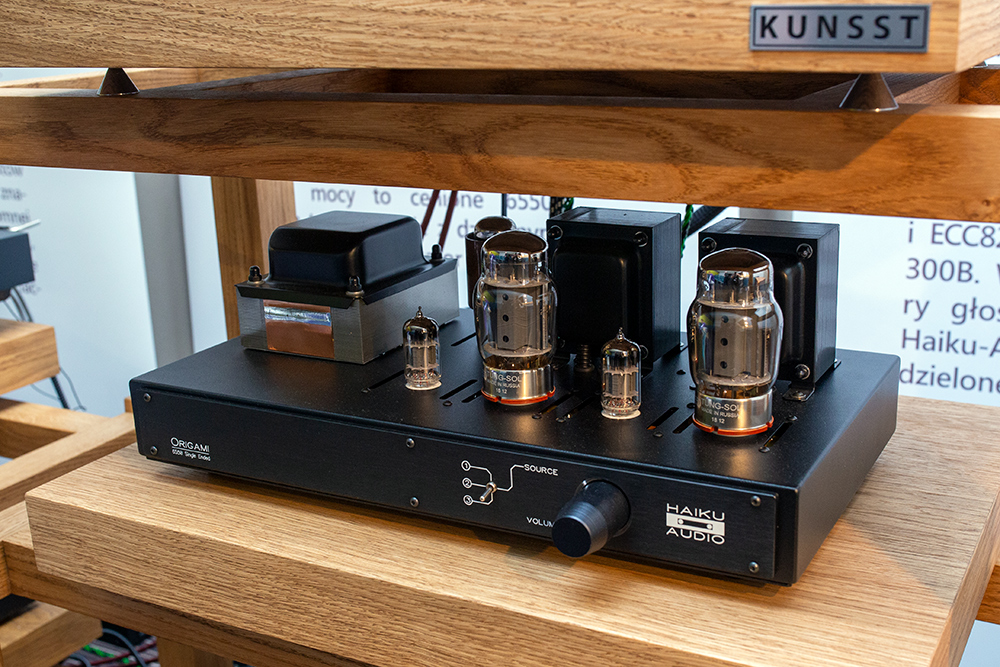