I had high hopes for a multi-part analog article for this show report, as I recall being inundated with turntable after turntable at last year’s Audio Video Show. However, in the first two days here at the show I haven’t seen anywhere near as many analog rigs, so I’m a little skeptical of whether I’ll be able to glean enough products to warrant a second part. But no matter! Let’s get it on, shall we? All prices are shown in Polish zlotys (zł) or euros (€). (Currently, the zloty trades at approximately US$0.26. Note that prices in Europe typically include a value-added tax, which in Poland is 23%.) 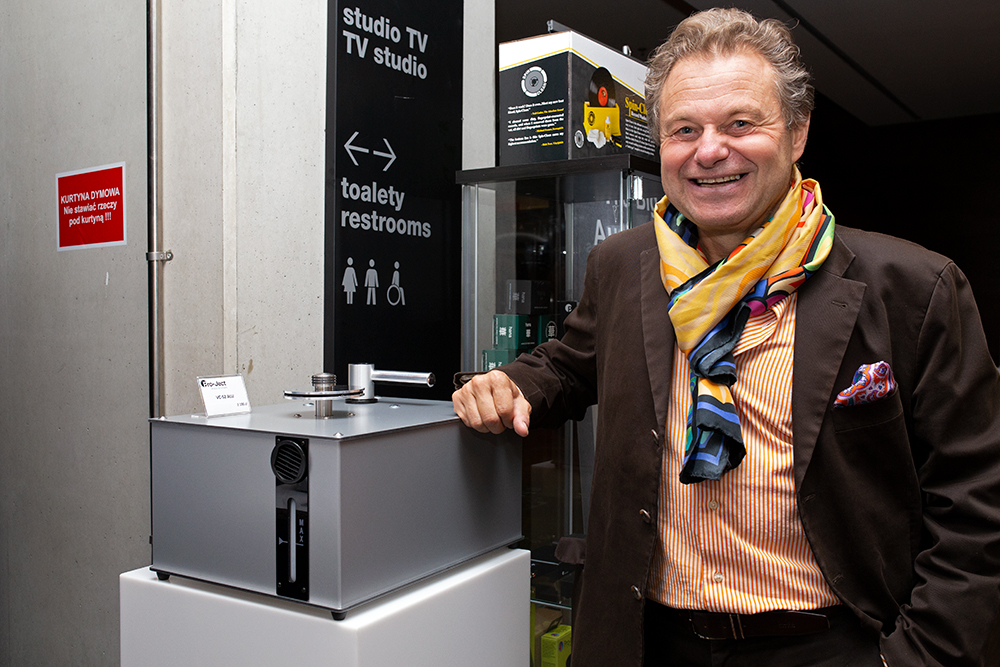 It was a pleasure to finally meet Heinz Lichtenegger, the founder of Pro-Ject Audio Systems. I’ve worked in Heinz’s orbit for well over a decade now, owning three different Pro-Ject ’tables, culminating in the outstanding RPM 10 Carbon.

I expected Heinz to be premiering at least one new ’table, as it seems there’s something new and ingenious coming out of this Austrian company nearly every week. The news, however, was Pro-Ject’s new VC-S2 ALU record-cleaning machine. The vacuum-powered RCM is certainly not a new concept, but the VC-S2 ALU is clearly a careful refinement that addresses a number of issues with the existing machines that are on the market. 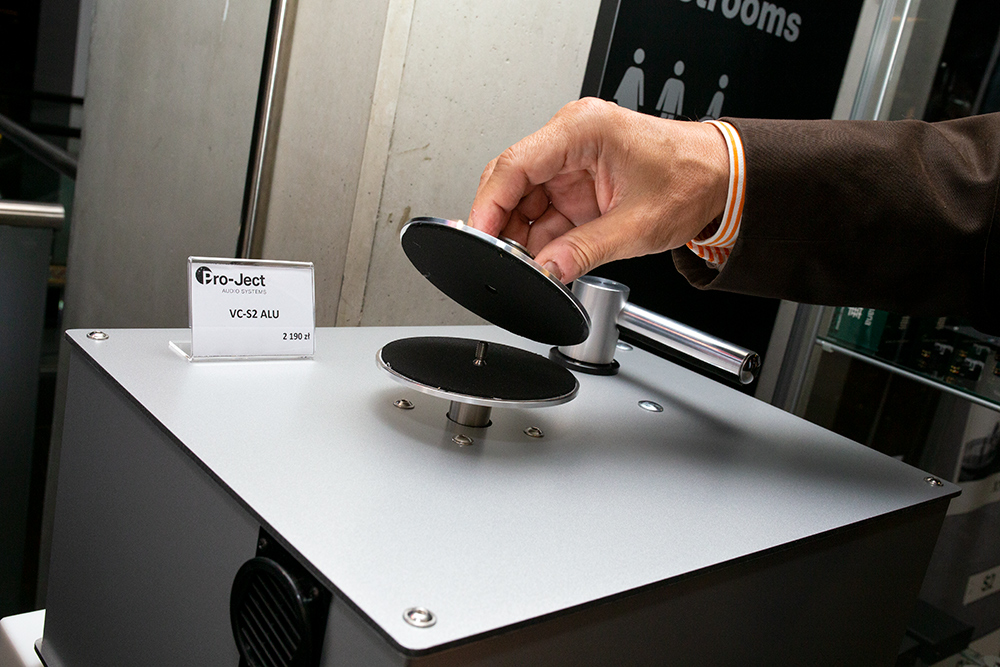 Most notable to me is the record clamp, which seals in the entire label in order to stop the paper from getting wet. You need a steady hand with both the liquid applicator and the brush on other machines in order to prevent stains on the label. Good job, Pro-Ject! Other refinements are the vacuum wand, which is solid aluminum to prevent wear and obviate the need for replacement. Further, the VC-S2 ALU chassis is made from a sandwich of sheet aluminum with a composite wood/resin core that’s waterproof -- and that’s handy since you’re always going to spill some fluid off the side of the record. The VC-S2 ALU’s motor is a seriously powerful unit that’s rated for continuous use. This looks to be a forever-machine, and a good value at zł2190. 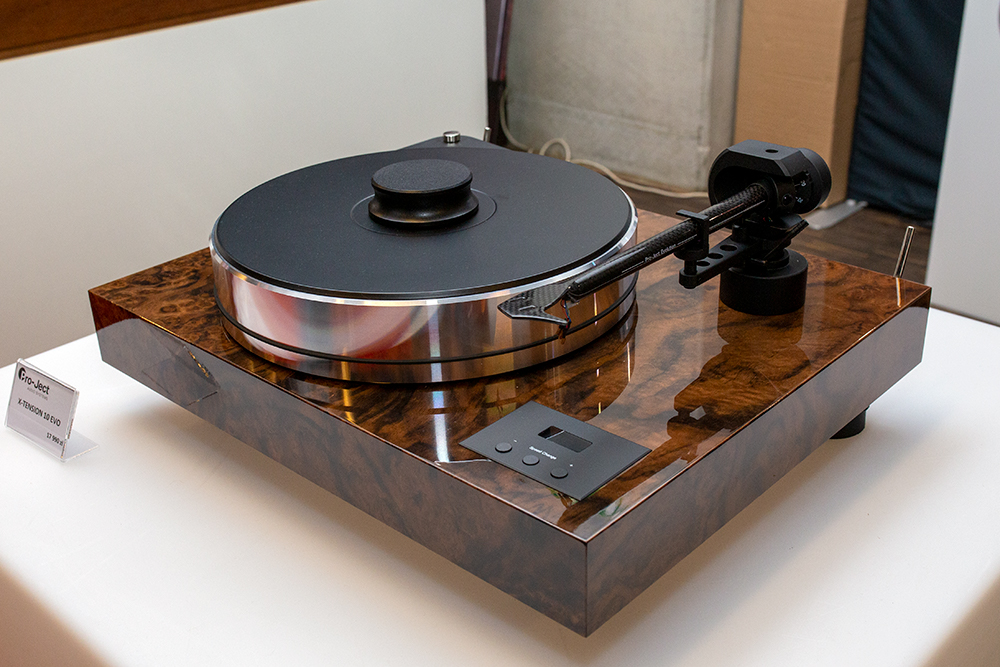 I just said that Pro-Ject wasn’t showing any brand new ’tables at Audio Video Show 2019. Well, that’s not exactly true. While the Xtension 10 Evolution isn’t really a new turntable, Pro-Ject was displaying it in a new burl walnut finish. The burl walnut veneer was beautifully applied with a stunning piano-lacquer finish that played off well against the polished-aluminum platter and carbon-fiber arm. In this finish, the Xtension 10 Evolution retails for zł17,990. 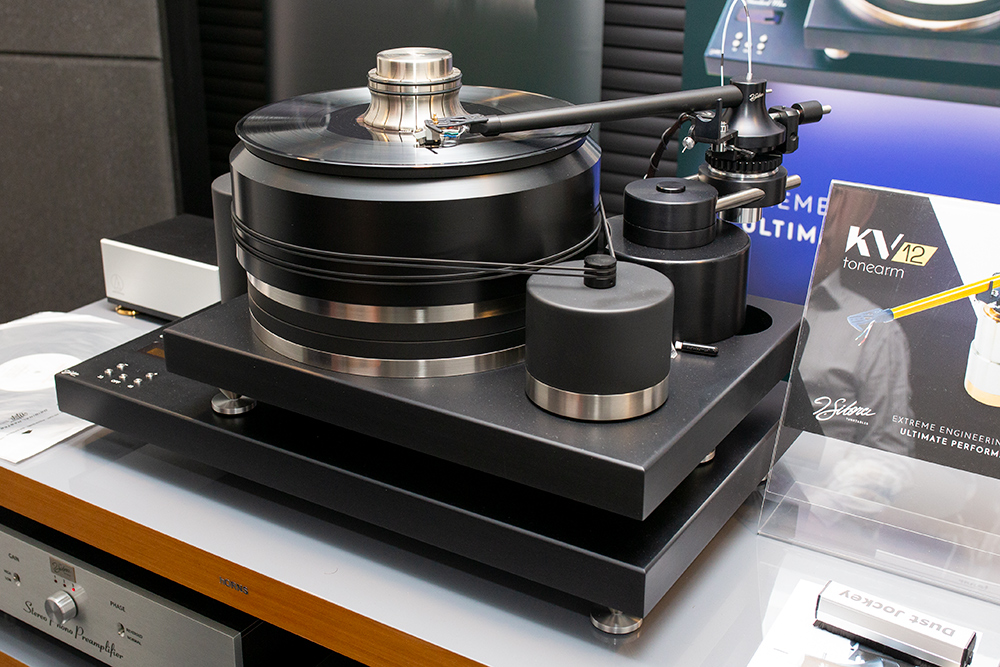 Although J.Sikora displayed its KV12 tonearm at last year’s Audio Video Show, it was in prototype form. Here in 2019 the company presented the production version of this impressive ’arm.

The KV12 is an oil-damped unipivot design with a 12" Kevlar wand, which can be either black or yellow. The mount and pivot are made from disparate materials such as aluminum, cast iron, bronze, and steel in order to dissipate resonances. 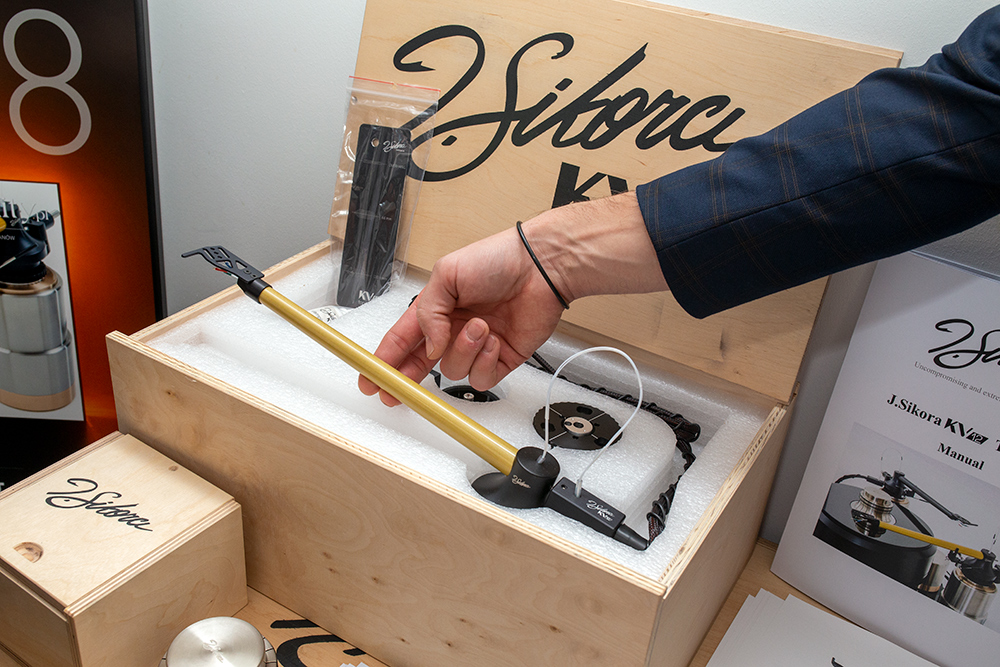 Although the KV12 is, overall, an impressive tonearm, I found myself most impressed by the VTA adjustment mechanism. VTA is controlled by turning a knurled dial that’s directly beneath the ’arm’s yoke -- extending the full diameter of the base. The VTA dial is extremely precise, with each quarter turn adjusting the arm height by 1mm. It also feels rock solid. 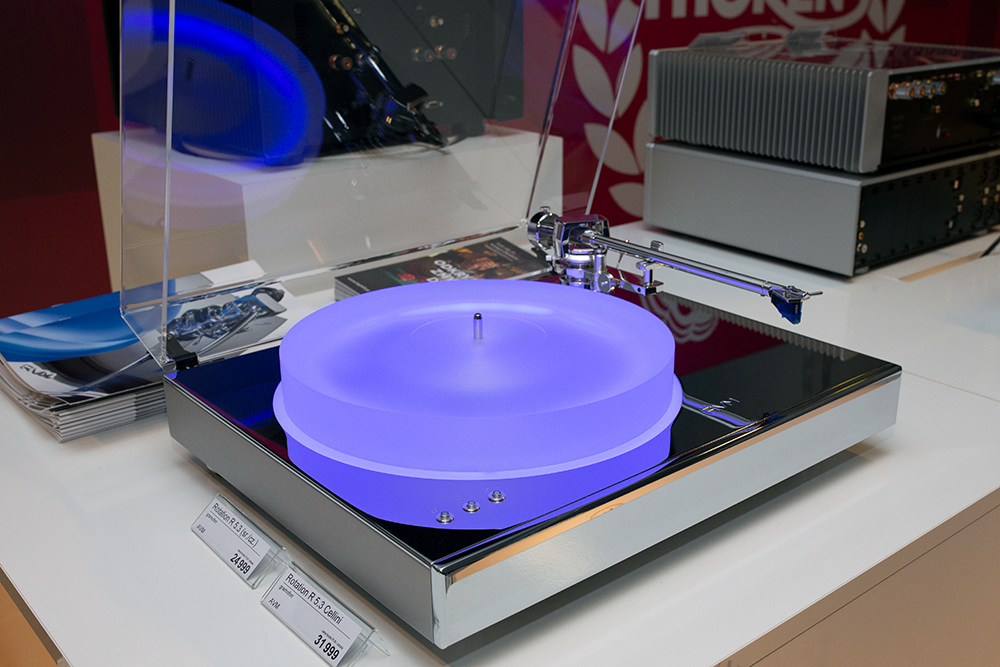 OK, OK, I know it’s not a new product, but this is the first time I’ve actually seen AVM’s Rotation R 5.3 Cellini turntable, and it essentially hooked its fingers up into my nose and dragged me over to ogle it.

If you were to judge this turntable by looks only, you’d probably feel AVM is reasonably justified in its zł31,999 price tag. The contrast between the frosted-acrylic platter, with its blue underlighting and the hand-polished chrome chassis, just took my breath away. Then factor in the flawlessly polished tonearm, and -- my stars -- you’ve got a looker.

Now I’ll admit that I’m fairly shallow when it comes to a sexy turntable, but as I looked deeper, I began to feel better about how much I lusted after this ’table. There are a number of design tricks that make the Rotation R 5.3 Cellini as much go as it is show. The counterweight is decoupled with a suspension from the rest of the tonearm, and the belt drive underneath the platter uses an offset idler pulley to equalize tension on the bearing.

Oh, by the way, you can switch off or dim the platter light. But who would want to? 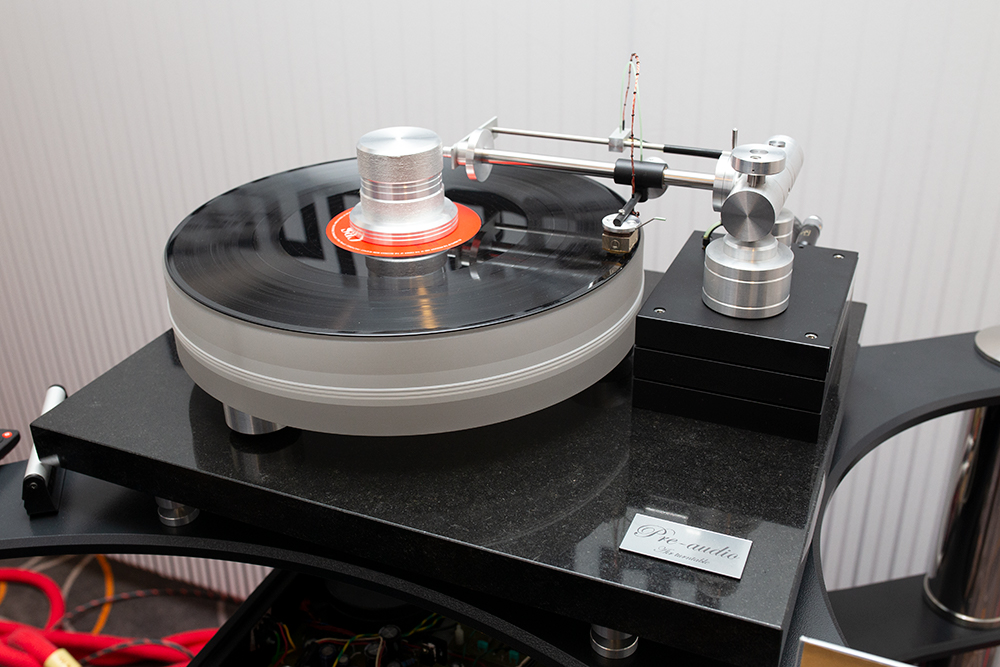 It takes a certain kind of madness to attempt production of an air-bearing turntable. Compressors, pumps, air lines, air dryers -- there’s a fair bit of fussy infrastructure that you need to consider before falling down the rabbit hole that is an air-bearing arm or platter. It’s no simple project.

Pre-audio, out of Nysa, Poland, has accepted this challenge, and it was presenting its ASP-1501NG turntable, which features an air-bearing arm. While that’s impressive enough -- the quality of the machining on the arm looked superb, which it certainly needs to be -- Pre-audio has somehow managed to find a way to mount the compressor in the base of the tonearm. In bygone days you’d have to find some way to run an air line into another room in order to hide the subwoofer-sized box that housed the compressor. It’d have to be in another room because, well -- it was a compressor and it sounded like an old refrigerator. The compressor in the ASP-1501NG? It’s essentially silent. I put my ear as close to it as I could get and I heard nothing. Resting my hand on it, I couldn’t feel a thing. 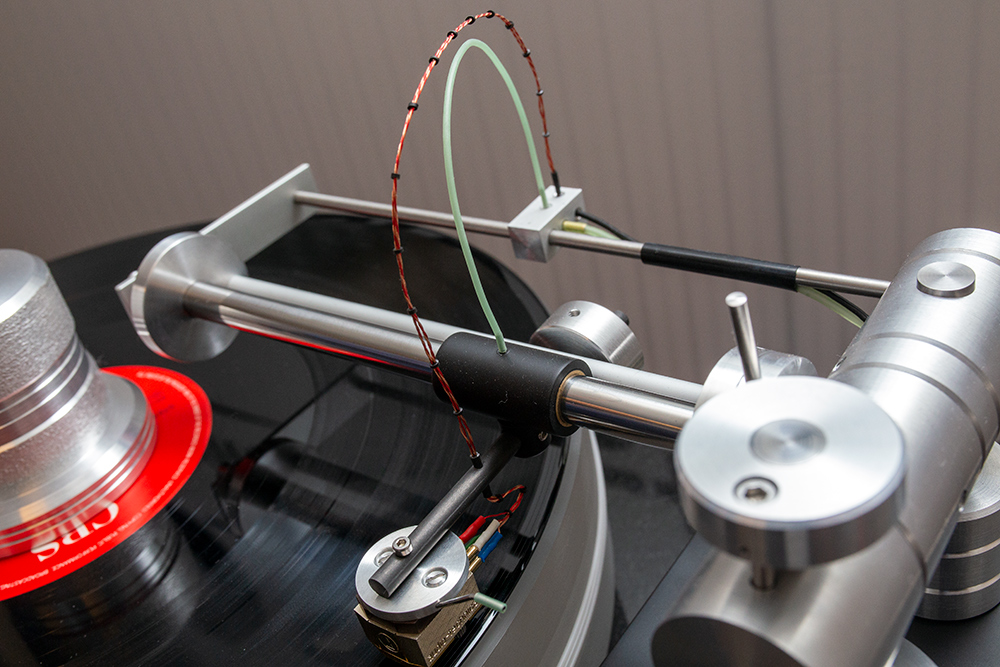 In my mind the jury is out on how well this configuration will work in the long run -- I have too many questions. But that said, at its €4600 price, even without a cartridge, the ASP-1501NG isn’t in any way overpriced. Good luck to this young company.