The day-one crowds at the Warsaw Audio Video Show were pretty good, but on day two the joint was jumping -- among the busiest I’ve ever seen at a consumer audio show. Moreover, the demographic mix was far more diverse than the male boomer crowd you typically see at North American audio shows. There were lots of young couples and singles, and young families with children, too. And the kids didn’t look like they were at the show under protest.

I have a theory about the broad enthusiasm for serious audio in Eastern Europe -- and (stay with me here) the dates of this year’s show bear a coincidental relationship to my theory. Day two of the Audio Video Show happened to fall on the 30th anniversary of the dismantling of the Berlin Wall. What’s the relationship? you ask.

Let me explain. Other than iconic products like Levi’s jeans, I bet that stereo components were the consumer goods that residents of Eastern Europe most longed to own during the Cold War. That era coincided with the boom years of component stereo in the West -- when audio became part of the mainstream. Now audio is more of a niche pursuit in North America. But in Eastern Europe more people seem to appreciate the value of great audio, and I think part of the reason is that it was unattainable for so long. 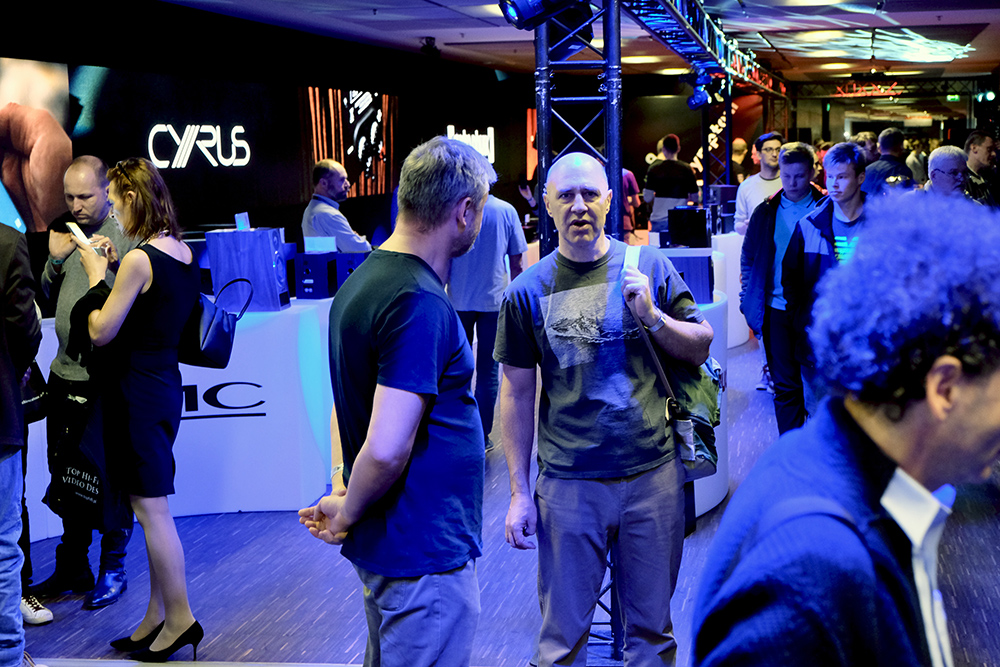 At the Warsaw National Stadium and the Radisson Blu Sobieski Hotel (one of the other show venues), there were long lineups to take in demos of high-end brands like MBL, Wilson, Rockport, Acapella, and Gryphon.

The ultra high end isn’t my beat for the SoundStage! Network. As senior editor of SoundStage! Simplifi, I’m here to cover “convenient, lifestyle-oriented hi-fi.” Active speakers fall right in my wheelhouse, and there were several interesting products in that category, including some new models that were shown publicly for the first time in Warsaw. The suite where DALI’s new Rubicon active speakers were being demonstrated was continually packed on the second day. 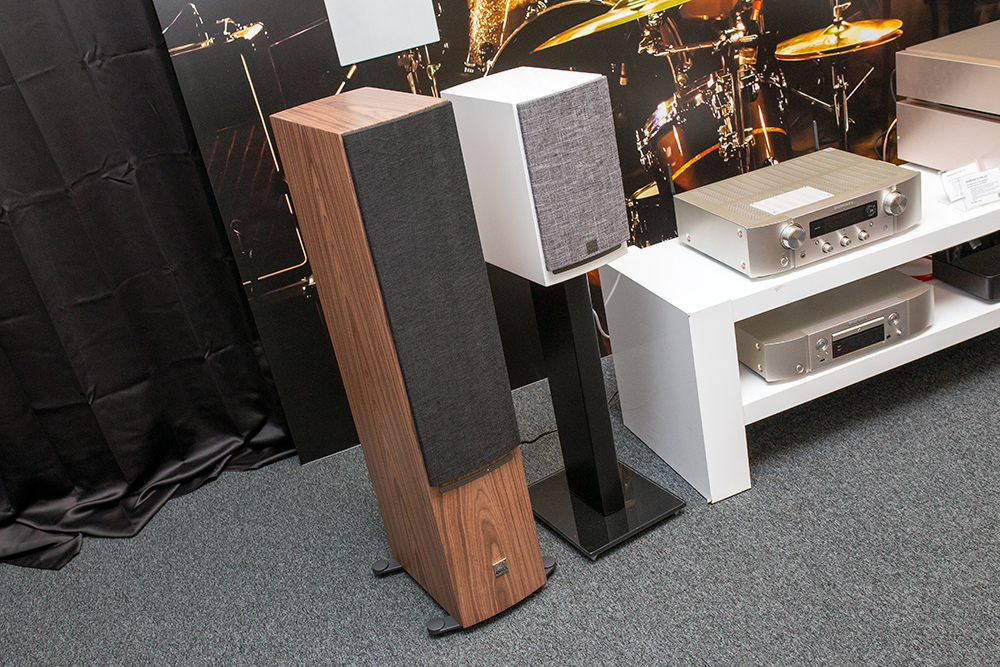 The official European announcement of DALI’s Rubicon 2 C active stand-mount speaker and Rubicon 6 C active floorstander is scheduled for the week after Audio Video Show 2019 -- the North American launch will take place in early 2020. So the representatives of Horn Distribution, DALI’s Polish distributor, were unable to tell me anything about the two speakers -- not the rated output of the built-in amplifiers, and not even the price. But I could figure a few things out . . .

The Rubicon 2 C and 6 C are active versions of DALI’s Rubicon 2 and 6 passive loudspeakers, and have the same driver complements and cabinet designs as their passive cousins. The Rubicon 2 C employs a 1.1" soft-dome tweeter and 6.5" wood-fiber cone woofer. The Rubicon 6 C employs two 6.5" woofers, along with a hybrid tweeter module combining the 1.1" dome and a 0.67" x 1.78" ribbon tweeter that handles very high frequencies. 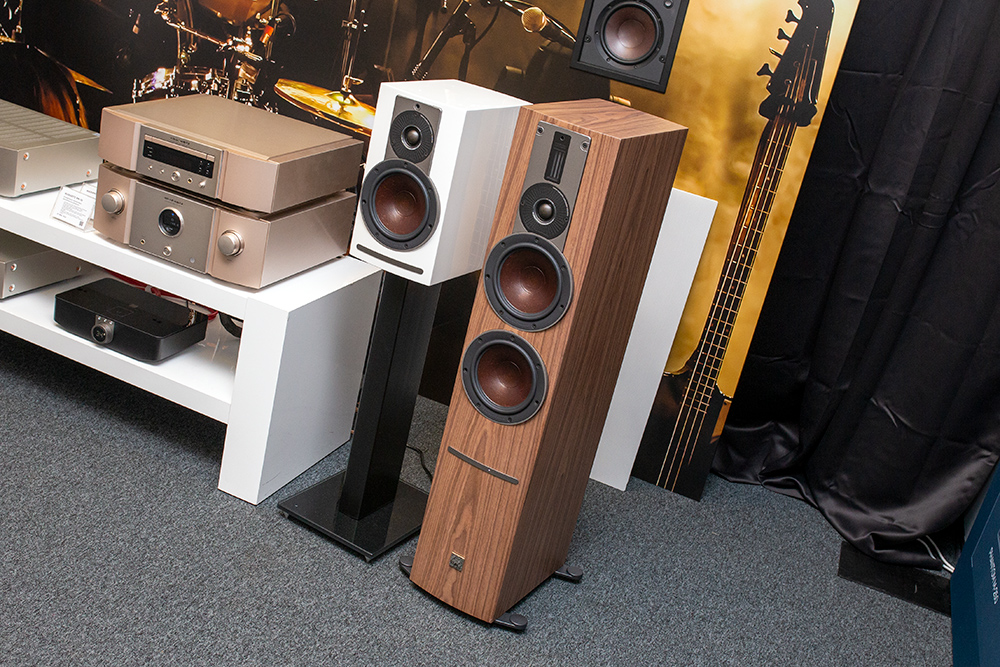 When I reviewed DALI’s Callisto 2 C active speakers in 2018, I thought they had a dated 1990s look. But I really liked the gloss-white finish of the Rubicon 2 C and the walnut veneer finish of the Rubicon 6 C shown in Warsaw, and I’m sure I’d feel the same about DALI’s gloss-black or rosewood finishes. I also liked what I heard in the demo. Playing an acoustic jazz number, the Rubicon 6 C rendered double bass and percussion with delicious slam and impact, and trumpet with impressive bite and clarity. 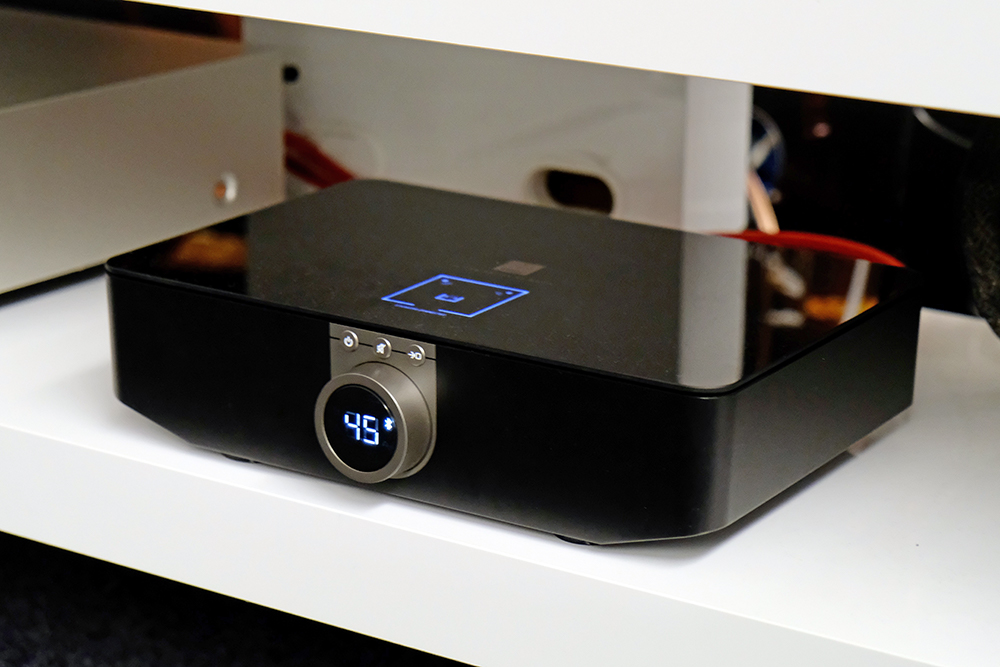 Like DALI’s Callisto active speakers, the new active Rubicons have line-level RCA inputs on their rear jack panels, but they’re really intended for use with the DALI Sound Hub, which was how they were demonstrated in Warsaw. The Sound Hub has optical and coaxial inputs, analog inputs, and Bluetooth connectivity, and it sends digital audio to the speakers at up to 24-bit/96kHz PCM resolution.

The Sound Hub also has a slot that can accept a BluOS module that enables the speakers to be used as part of a Bluesound whole-home audio system, under control of the BluOS app for iOS or Android. The BluOS module also adds support for Apple AirPlay 2 and Roon Ready capability, so it’s a very attractive option. 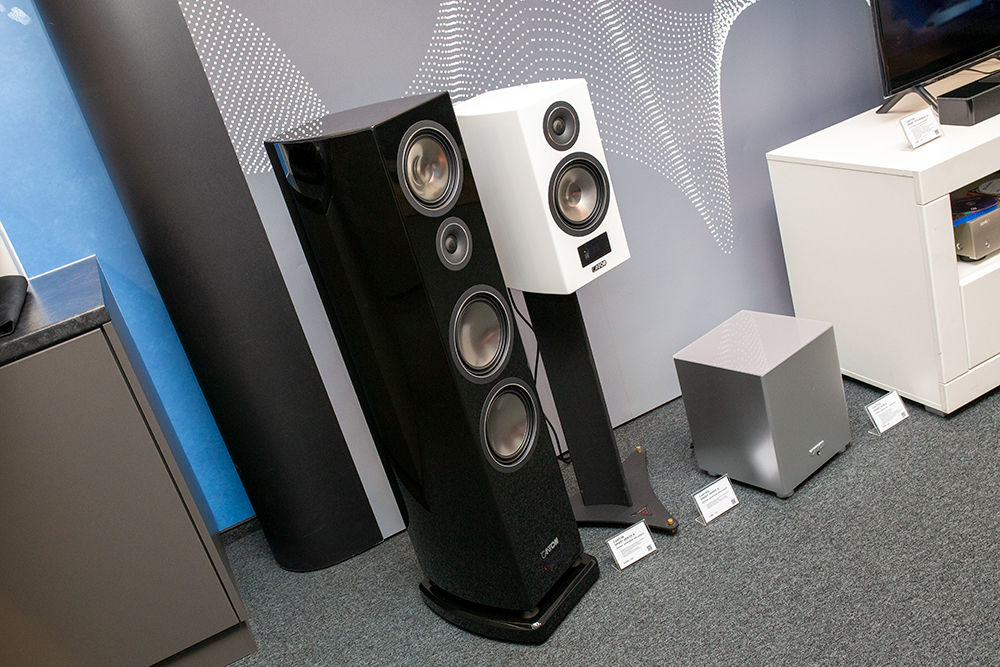 On both models, the master speaker contains the jack panel, which includes USB, coaxial and optical S/PDIF, and RCA and XLR analog line-level inputs, and communicates wirelessly with the slave.

The Smart Vento 9 and Smart Vento 3 have onboard Dolby Digital and DTS surround decoders, and they can be grouped with other Smart Vento speakers, including the Smart Sub 8 (zł2599), Smart Soundbar 10 (zł3999), and Smart Soundbox tabletop speaker (zł1499) for surround-sound applications.

The newest addition to Canton’s Smart range is the Smart Connect 5.1 wireless six-channel preamplifier (€500), which has four HDMI inputs, optical and coaxial S/PDIF inputs, and analog inputs, as well as Dolby Atmos and DTS-HD Master Audio decoders with virtual surround processing, Chromecast Built-in, and Spotify Connect. It can send lossless signals from any connected source to all Canton Smart products, allowing them to be grouped for surround audio or multi-room music.

Canton has a solid following in Europe, but it currently has no distributor in North America. 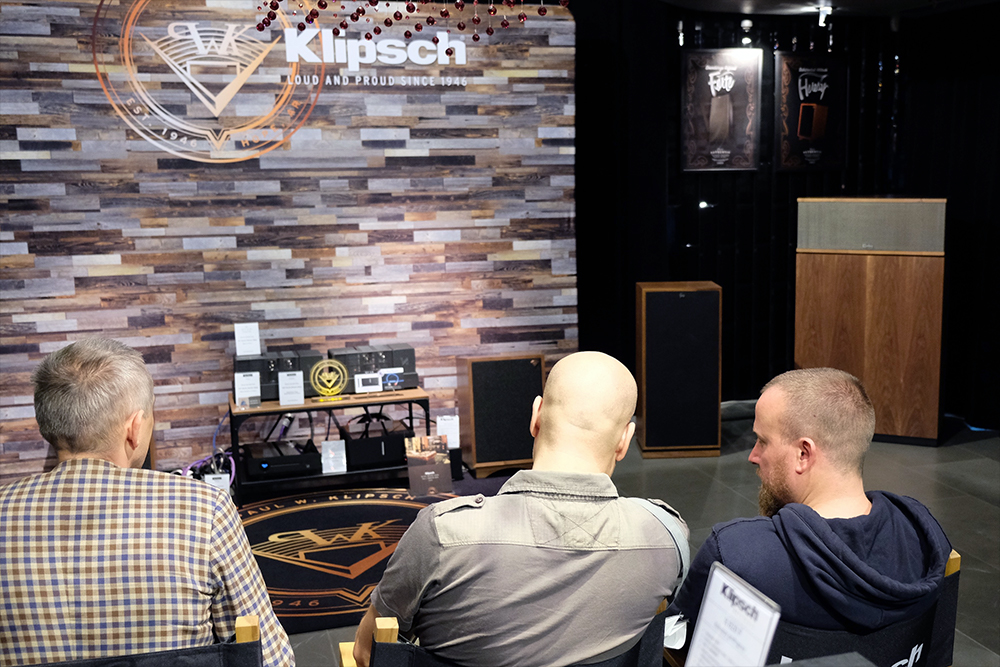 The star attraction in the room of Konsbud Hi-Fi, which distributes Klipsch in Poland, was a pair of Klipschorns (far right in photo), which I found really engaging. The big corner horns sounded exciting and dynamic, much as I expected, but also fast, articulate, and well integrated. The Klipschorns don’t really fit under the Simplifi umbrella (convenient, lifestyle-oriented hi-fi) . . . 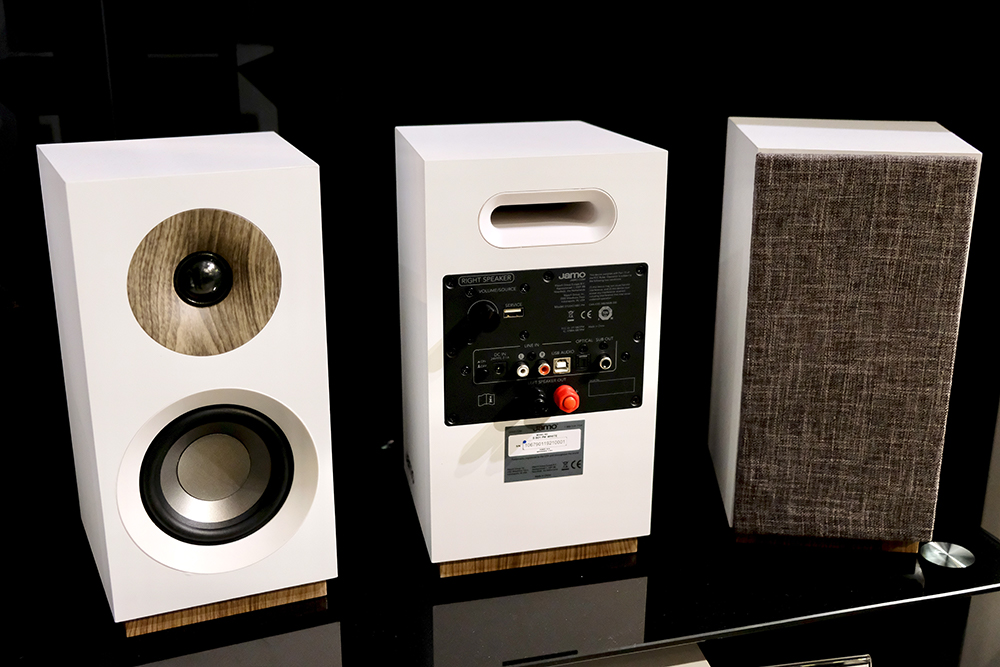 . . . but the Jamo S 801 PM powered speakers do. A Danish brand, Jamo is now owned by Klipsch Audio, Inc. Priced at zł1199/pair, the S 801 PM speakers employ a 4" woofer and a 1" dome tweeter driven by a 60Wpc class-D amp. They’re available in finishes of black or white. The master speaker has optical and analog inputs, and a USB DAC with maximum resolution of 24/96 PCM, plus Bluetooth wireless connectivity and subwoofer output. 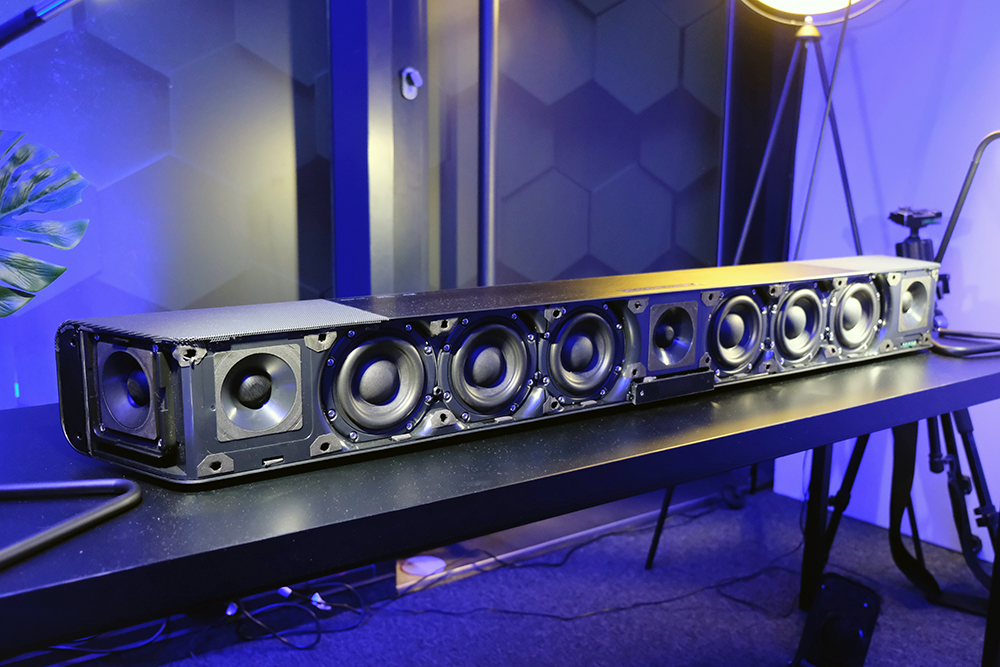 I was pleased to find that Aplauz, Sennheiser’s Polish distributor, was demonstrating the Ambeo Soundbar (zł10,000) in one of its suites at the Warsaw National Stadium. For some time, I’ve been wanting to hear this product, which won a 2019-2020 EISA Award in the Home Theater Audio category as best premium soundbar.

The soundbar has three HDMI 2.0a inputs, HDMI 2.1 output with support for eARC (required for lossless surround audio), as well as an optical output. For music streaming, the Ambeo Soundbar has Bluetooth and Wi-Fi connectivity, and Chromecast Built-in.

The program material for the first demo I took in came from one of the later Star Wars movies. The dramatic music score and sound effects extended far to either side of the soundbar, and far out into the room. It was pretty impressive, but I wasn’t blown away. Certainly the experience didn’t match demos I’ve heard of 5.1.2 systems with separate components. 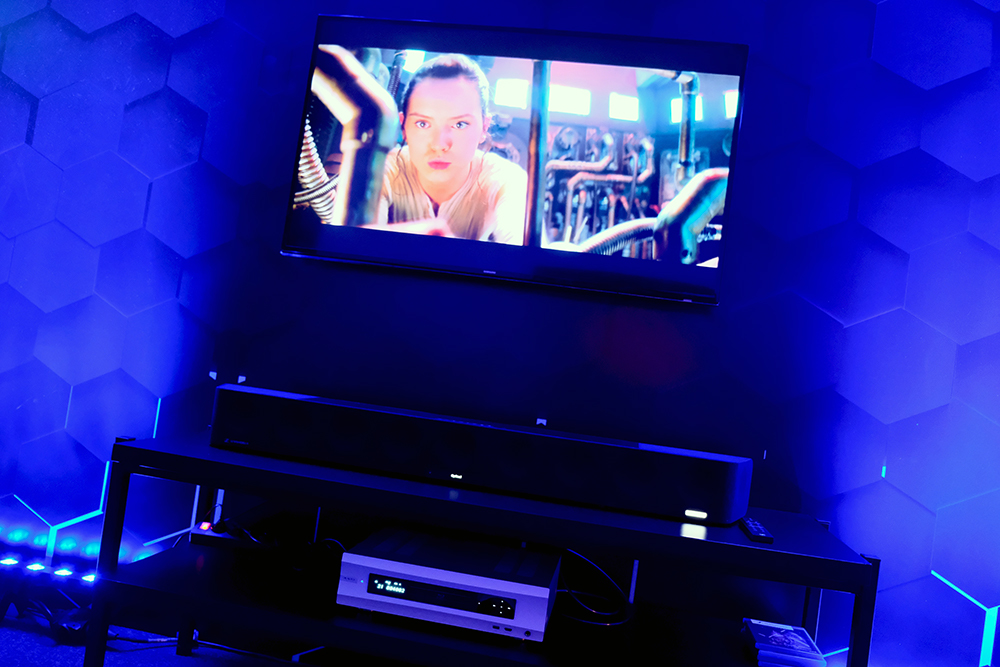 When Doug Schneider visited the room later that day, he said the sound was nowhere near as enveloping as the demos he’d heard during the EISA presentation back in the summer, and journalists from other countries who were part of the EISA Awards confirmed this.

The explanation is simple. Aplauz had connected the Ambeo soundbar to the Oppo Blu-ray player it was using for this demo with an optical cable -- not HDMI. An optical connection can’t carry a Dolby Atmos or DTS:X stream, so what I was hearing was either an upmix of a 5.1-channel Dolby Digital or DTS stream (if the Oppo was set to bitstream output), or an upmix of two-channel stereo (if the player was set to PCM output).

While it was disappointing not to have gotten a full experience of the Ambeo soundbar, I now know that I’d like to get one in for review. A soundbar that can deliver 5.1.2 immersive audio, with bass that descends to 30Hz without a subwoofer, fits right into Simplifi’s mandate. 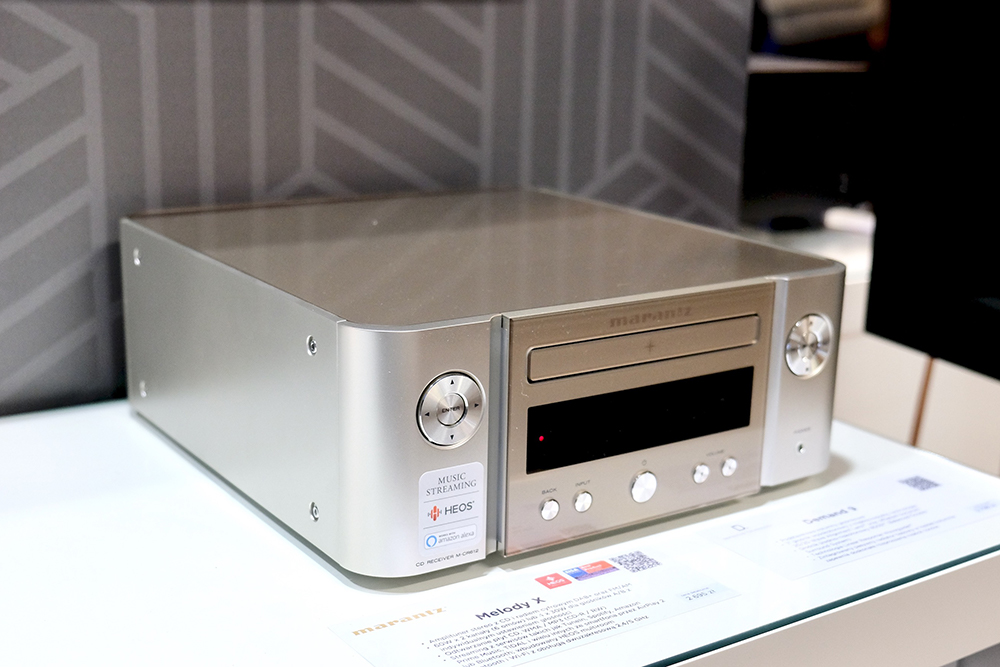 As I’ve discovered since downsizing my residence a couple of years ago, it can be hard to fit a full-fledged component system into a multi-purpose room, especially in a small urban home or apartment. For this kind of setting, a compact all-in-one system, like the Marantz Melody X (zł2695), will fill the entertainment bill for lots of people.

In a hallway exhibit at the National Stadium, Marantz’s Polish distributor, Horn Distribution, was playing a trailer for Black Panther through the Melody X and a pair of Definitive Technology Demand 9 floorstanding speakers. Given the environment and program content, I can’t make any meaningful comments on sound quality, other than to say it was big and dramatic, considering the compact form factor of the Melody X. 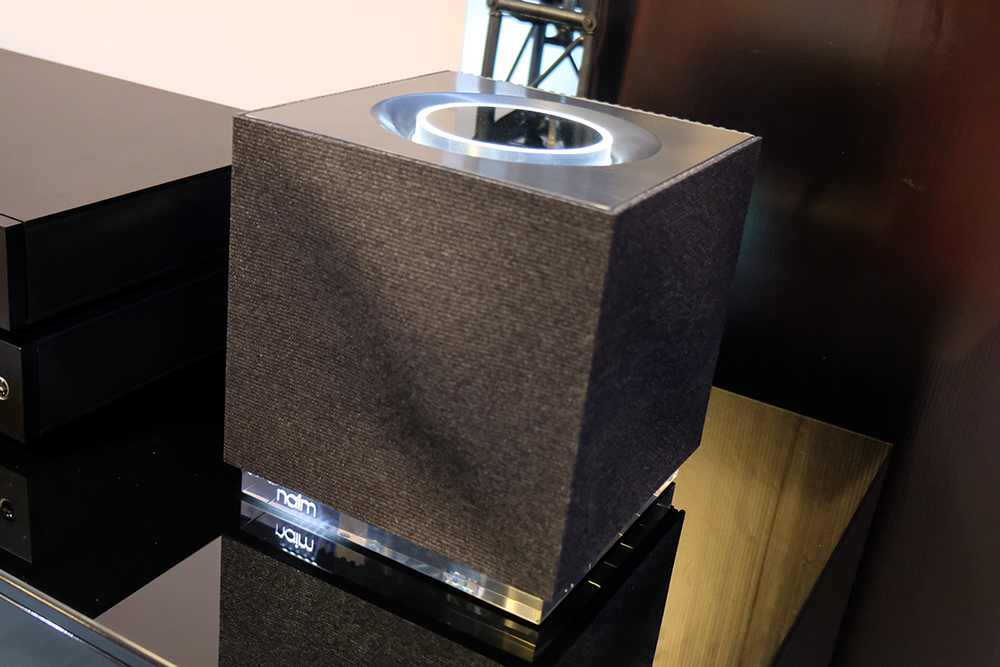 At High End 2019, which was in Munich in May, Naim launched a second-generation version of its Mu-so music system, which I reviewed in July. Then, in August, Naim announced a new version of the smaller Mu-so Qb. The Mu-so Qb 2nd Generation (zł3999) was on static display in Naim Focal’s hallway exhibit at the Warsaw National Stadium.

Like the Mu-so 2nd, the Mu-so Qb 2nd has new drivers co-developed with Focal, an upgraded processor, an enhanced top-panel dial with 15 functions, and support for Apple AirPlay 2 and Google Home. It’s also Roon Ready. I received a review sample a couple of weeks before departing for Warsaw. You can expect to see a full review of the Mu-so Qb 2nd Generation on SoundStage! Simplfi in December or January.