While I was walking around the Radisson Blu Sobieski and National Stadium, it seemed like every room had new products. Every. Single. Room. Usually we have to hunt for these, but there was no escaping components that needed our attention. We found a wealth of opportunities for show coverage here at Audio Video Show 2019. All prices are shown in Polish zlotys (zł) or euros (€). (Currently, the zloty trades at approximately US$0.26. Note that prices in Europe typically include value-added tax, which in Poland is 23%.) 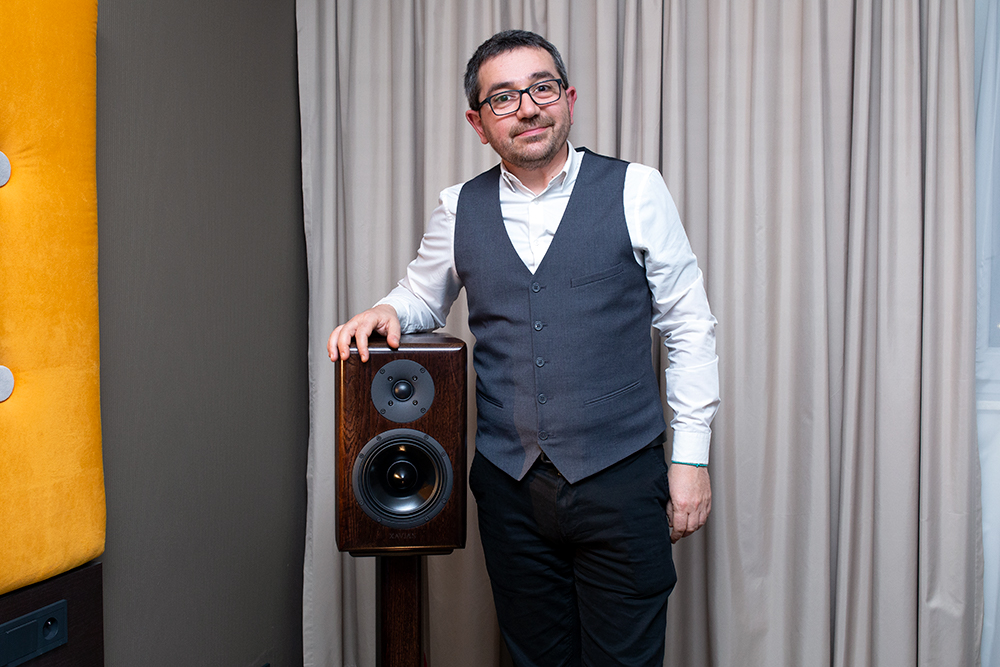 From Prague, in the Czech Republic, Xavian was showing its Orfeo speaker, which is part of the company’s top Epica line (in the photo above with the Orfeo is company owner and chief designer Roberto Barletta). It’s not a new speaker -- it’s about four years old -- but it’s only recently that the company has been making a push to get its speakers known worldwide. That’s why we’re only getting around to seeing them now. 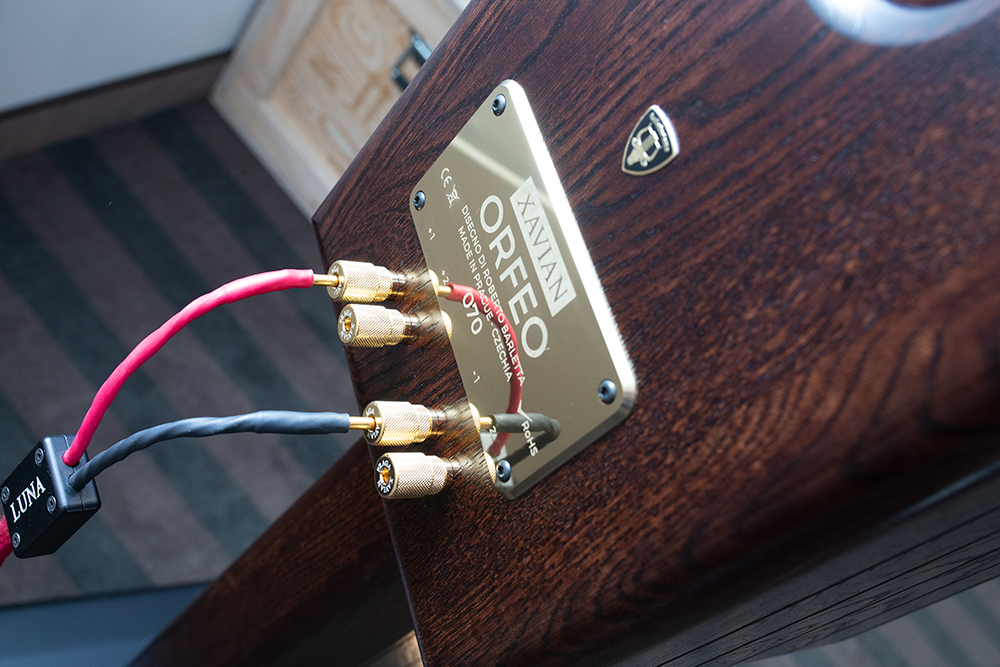 The Orfeo is a stand-mounted minimonitor with a 6.9" midrange-bass driver. High frequencies come by way of a 1.1" tweeter. The drivers are said to be bespoke designs, made by a sister company in Italy. Perhaps the most striking feature of the Orfeo is its construction from solid oak, but not so apparent is what the company says is a “labyrinth” that resides inside, behind the tweeter, to help tame the dome resonance. The crossover is designed such that it wires the drivers in series, which is why there’s no provision for biwiring or biamping, though, from behind, you’ll see there are multiple binding posts. Those posts allow for tweaking the tweeter output +/-1dB or +/-2dB. The Orfeo retails for zł26,000 per pair, while the matching stand will set you back another zł4000 per pair. 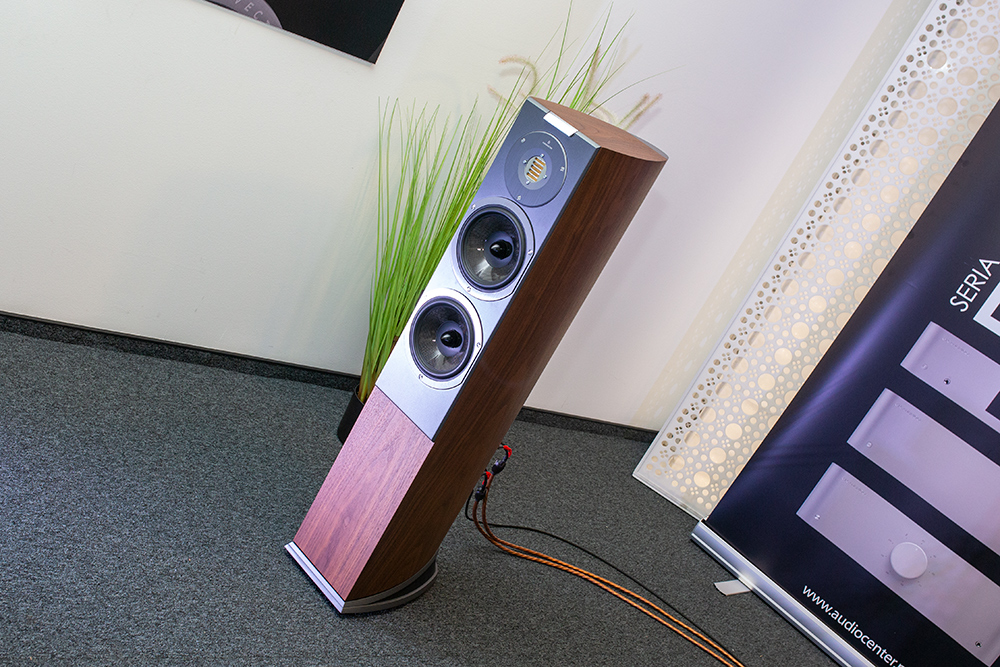 The new R 3 Arreté from Audiovector, out of Copenhagen, Denmark, is an attractive, slim, 2.5-way, rear-ported tower with some very interesting tech lurking inside. On the front of the R 3 Arreté is an Audiovector air motion transformer (AMT) tweeter and two of the company’s new carbon-fiber drivers. Around back . . . 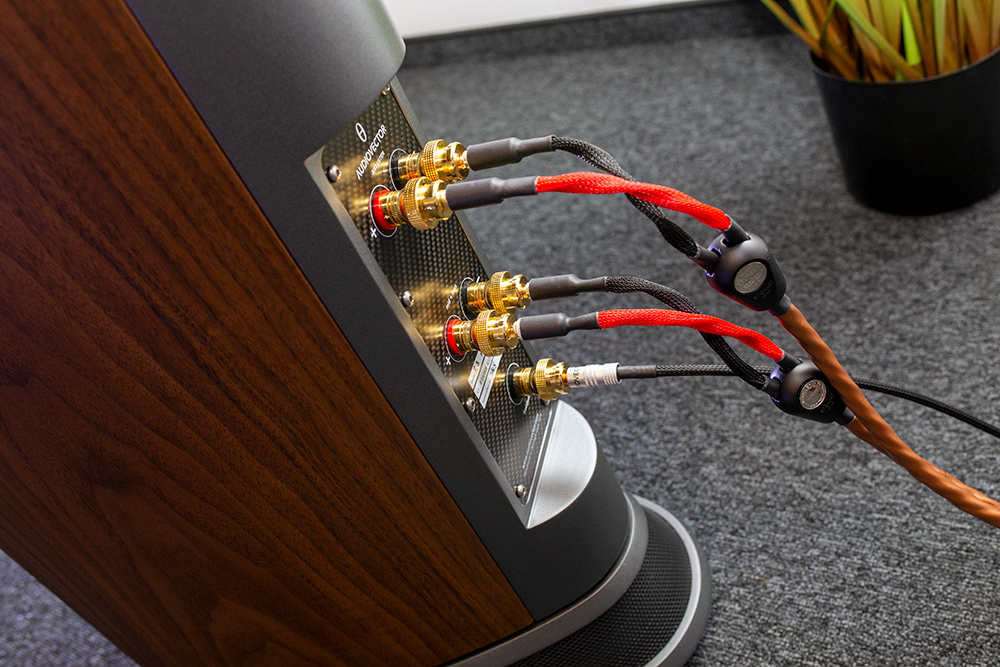 . . . the R 3 Arreté employs a ground connection -- the Audiovector Freedom Grounding system, which the company describes as “a complex distortion elimination construction.” The grounding system drains the charge from both the drivers and the crossovers -- essentially, a build-up of current that’s generated by the movement of the diaphragms. The grounding circuit is attached to the crossover, which is mounted on a carbon-fiber plate.

The R 3 Arreté is available in four matte colors for €9760 per pair, and the Freedom Grounding system adds another €650. 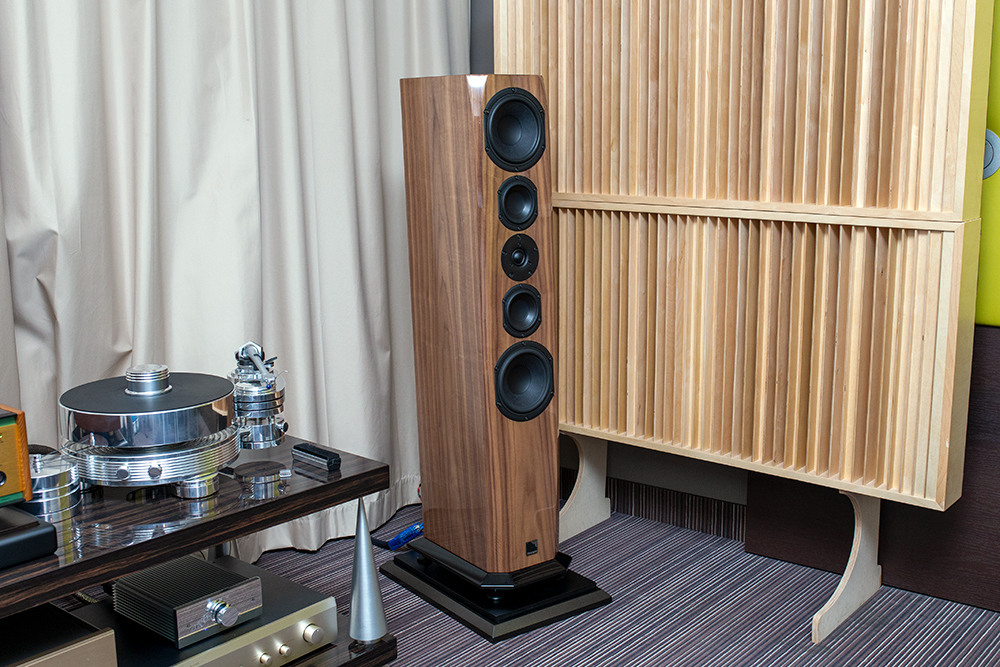 With its expanded D’Appolito driver arrangement -- there’s a woofer above and below the midrange-tweeter-midrange array -- the p9 from Phonar Akustik presents a thin, tall, elegant profile, especially considering the high quality of the gloss walnut finish. The 6.3" Peerless bass drivers at top and bottom hand off to 4" midranges, with a 1" Scan-Speak tweeter in the middle of all this.

While Phonar Akustik is a German company, the p9 cabinet is made in Denmark. There are seven coats of either paint or lacquer here, with finishes of black, white, or walnut available for a reasonable €4500 per pair. 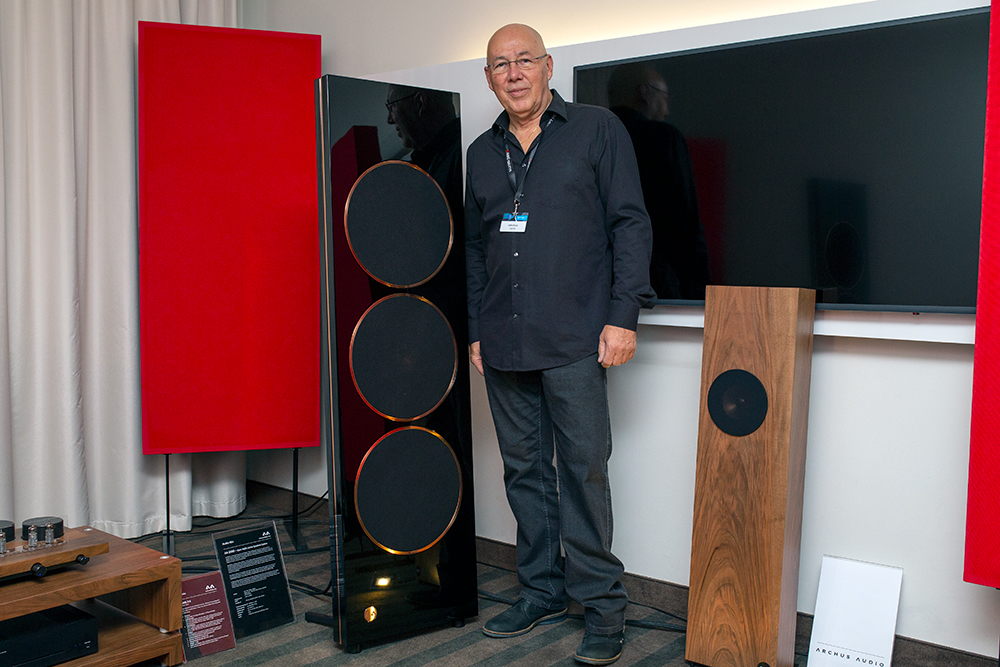 Here’s an ambitious product: an open-baffle, three-way active loudspeaker with the drivers crossing over in a very peculiar way. You don’t see that every day. Audio Alto, from Slovenia, is a busy company, making tube amps, speakers, and source components. And here’s a seriously well-thought-out speaker that’s attractive and very well built.

The AA O105, shown in the photo above with founder and chief designer Sasha Burian, is comprised of two 12" woofers, with a 5" full-range driver in the middle. The 5" driver runs from 100Hz upward, while the two woofers operate below 100Hz but don’t cover the exact same frequency range. That’s why the company calls it a three-way design (if they were both covering the same range, it would be a two-way). There are three amplifiers in the cabinet, for a total of 600W in the system. With its digital inputs, the AA O105 employs DSP for room optimization via the accompanying software package. There are also RCA and XLR inputs. 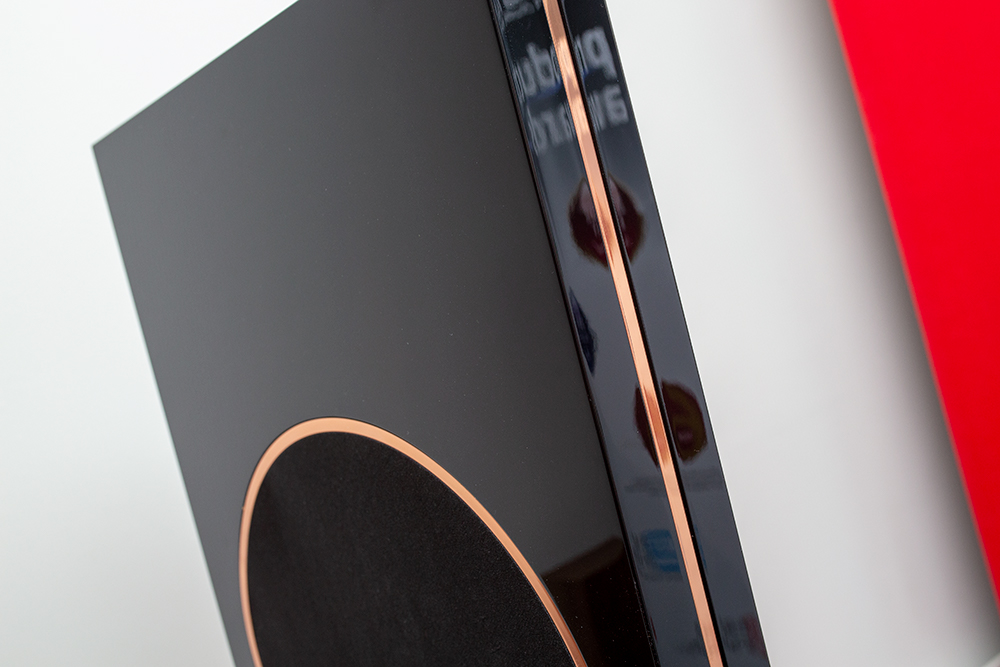 Audio Alto quoted the price as ranging between €24,000 and €27,000 per pair, depending on finish choices. One of those choices is solid copper surrounding each driver and down the sides of the panel. Apparently, there’s 20kg of copper in each pair of speakers, which no doubt accounts for that serious price differential. Also included in that price is transportation and installation -- in the EU, that is. 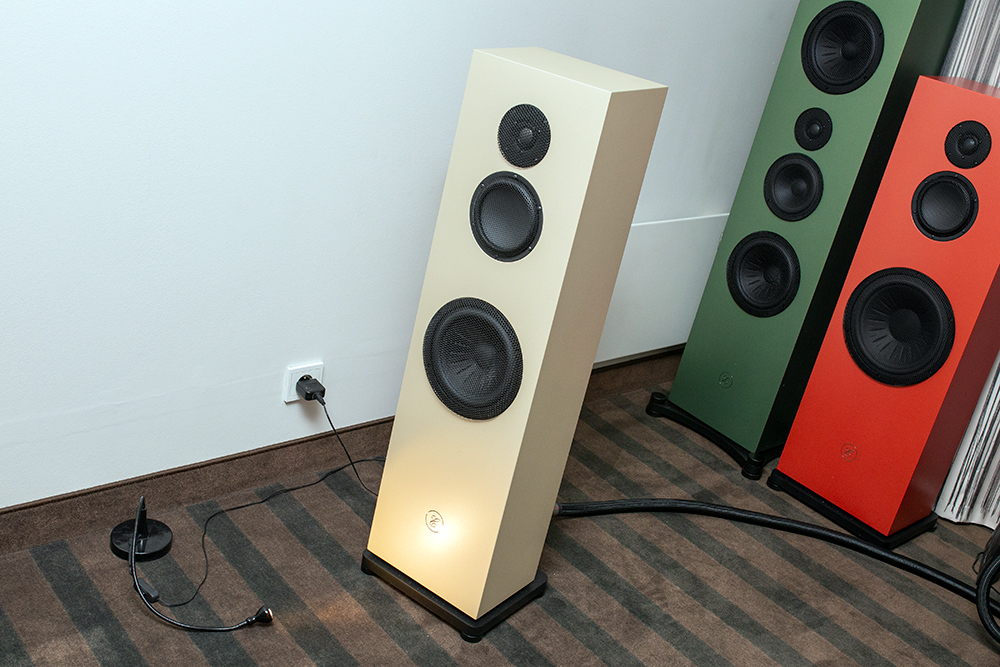 Equilibrium, from right here in Poland, had several speakers on hand as part of their new Idea range, but it’s the smallest of the floorstanders, the S8, that caught our attention. While Equilibrium is 15 years old, the S8 is a fresh-baked one week old.

The S8 is crammed with high-spec drivers -- a 1" beryllium-dome tweeter stands above a 5" Accuton midrange, and below that is an 8" Eton woofer operating in a sealed enclosure. The S8 is available in any color imaginable, and Equilibrium will finish them in matte, semi-gloss, or high-gloss for zł26,000 per pair. 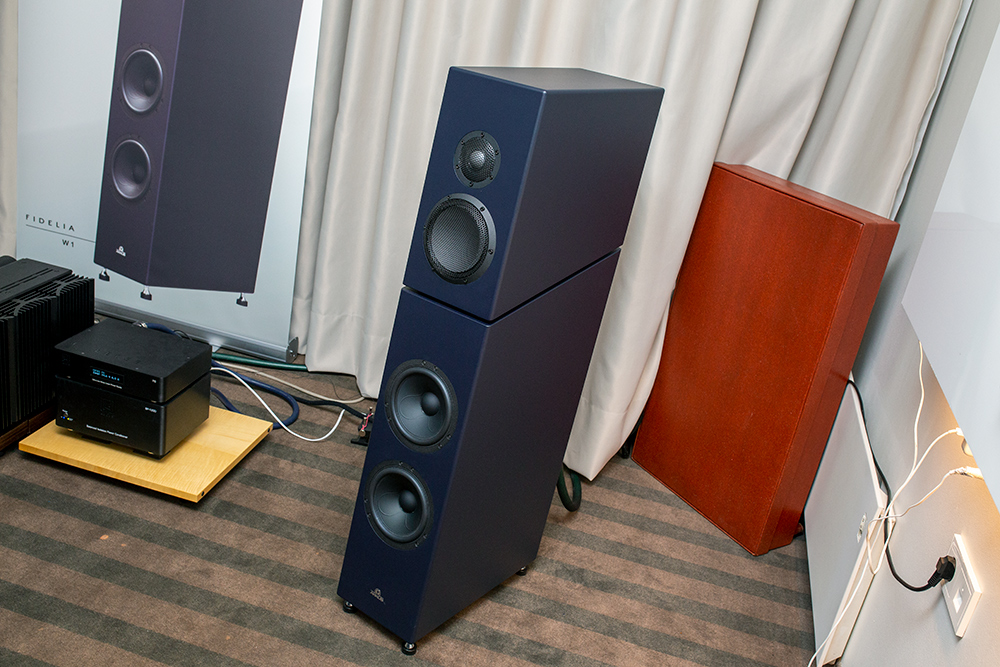 Akkus, another Polish manufacturer, was displaying its two-piece Fidelia speaker. The Fidelia consists of two modules -- the MH1 woofer and the W1 midrange-tweeter. It seems that Akkus is a busy company, as it makes many of the components that go into its speakers, including the resistors used in the crossovers. 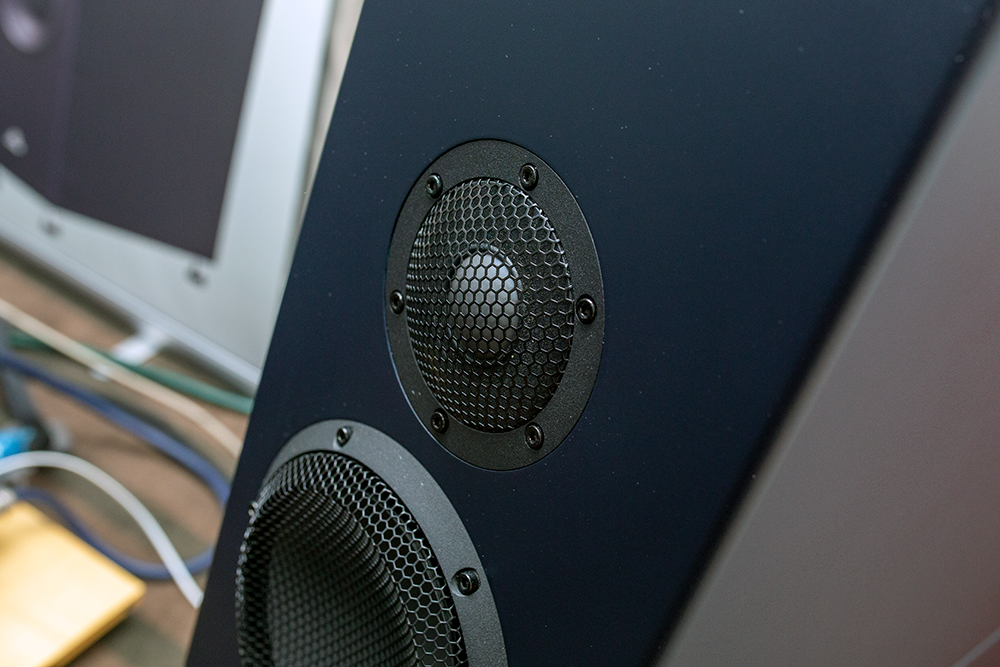 The MH1 is loaded with Scan-Speak woofers, while the W1 employs a BlieSMa beryllium tweeter and Accuton midrange. Both modules are available separately, with the MH1 retailing for zł25,000 per pair and the W1 setting you back zł50,000 per pair, but at Audio Video Show, they were obviously playing together and sounding very good.