Well what do you know? There were a whole bunch of analog pearls hidden within the fleshy innards of Audio Video Show 2019. While my initial feeling was that there were fewer turntables actually in use this year, what I found made up in quality what it lacked in quantity.

All prices are shown in Polish zlotys (zł), British pounds (£), or euros (€). (Currently, the zloty trades at approximately US$0.26. Note that prices in Europe typically include value-added tax, which in Poland is 23%.) 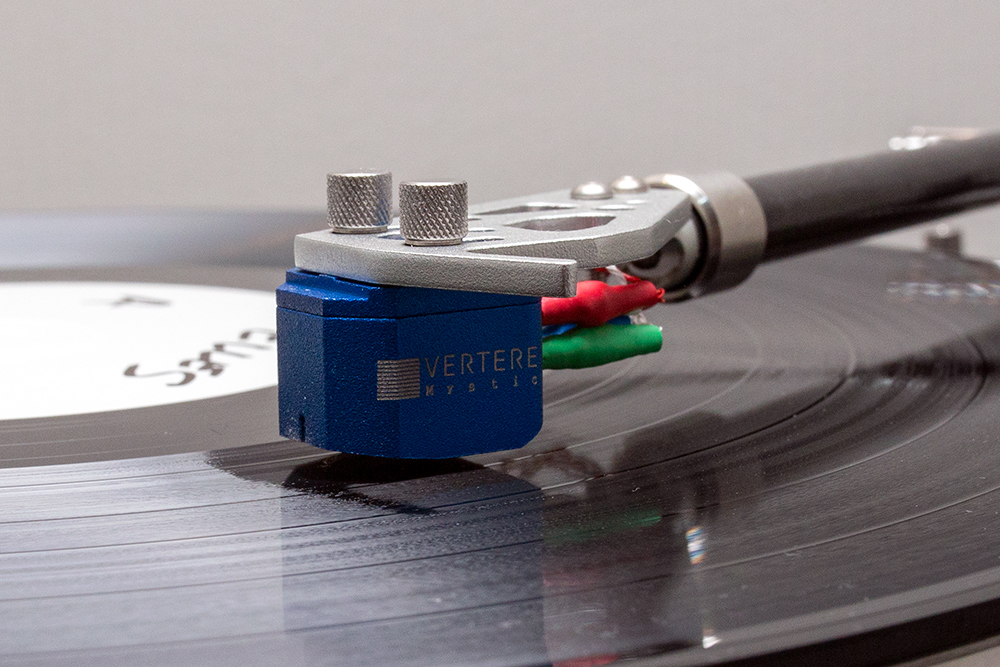 Let’s start with a little gem, a nugget that makes me hopeful for the analog future. Touraj Moghaddam has forgotten more about turntables than I could ever hope to know. Originally one of the principals of Roksan -- the company for which I will forever be grateful, as they made my first real turntable -- he moved on to found Vertere, which makes both high-value and high-quality turntables, tonearms, and phono stages.

Since it now had both ’tables and phono stages, the company decided to change directions and manufacture its own cartridge. And this is what makes Jason a happy boy -- Vertere now has a cartridge that isn’t crazy expensive. Expensive cartridges make me sad, because it’s like buying really expensive brake pads. Why bother, since they’re just gonna wear out? The Vertere Mystic moving-coil cartridge retails for £1950, which isn’t exactly cheap, but it isn’t insanely expensive either. It’s manageable, I’d say.

Outputting a plump 0.5mV and employing a micro-elliptical stylus, the Mystic promises to deliver good sound quality even if you can’t manage to set it up with precision. 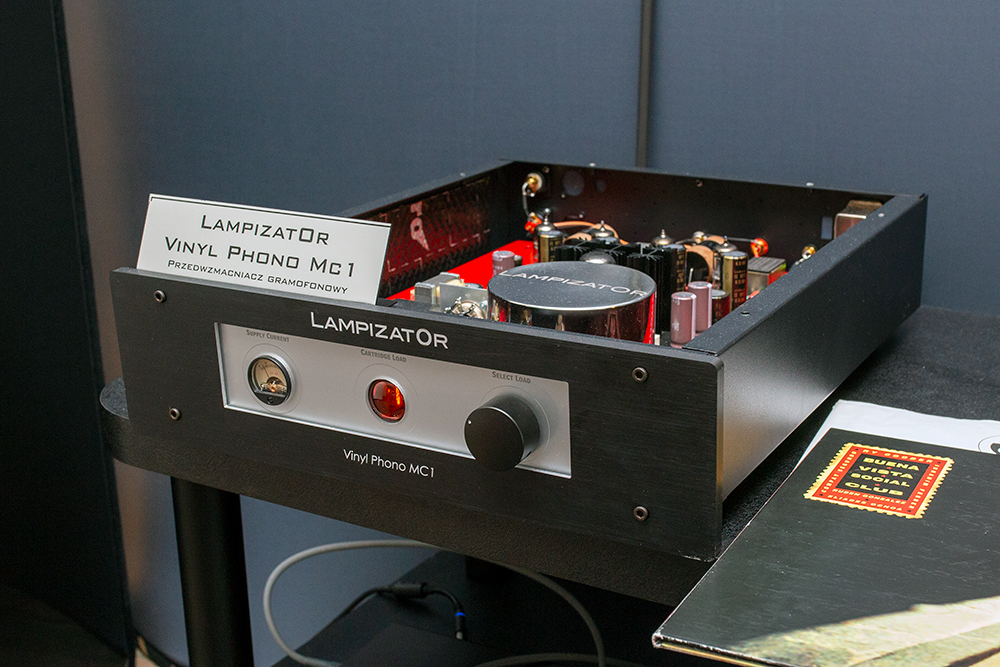 . . . but it’s a glorious madness. Trying to build an all-tube phono stage that can jazz a signal up by 70dB is crazy, right? Tubes are noisy, and microphonics fight with the signal every step of the way. And that garbage gets amplified with every gain stage. Screw it -- we’ll use solid-state for at least part of the signal. That’s what most every designer thinks. But not the nutjobs at LampizatOr, the Polish manufacturer of tube gear.

What we have here is an all-tube moving-coil-only phono stage that generates 70dB of clean, quiet gain. There are no transistors in here, baby. Even the front display, which reads out the impedance setting, is a Nixie tube. Oh, and the MC1 is tube rectified. 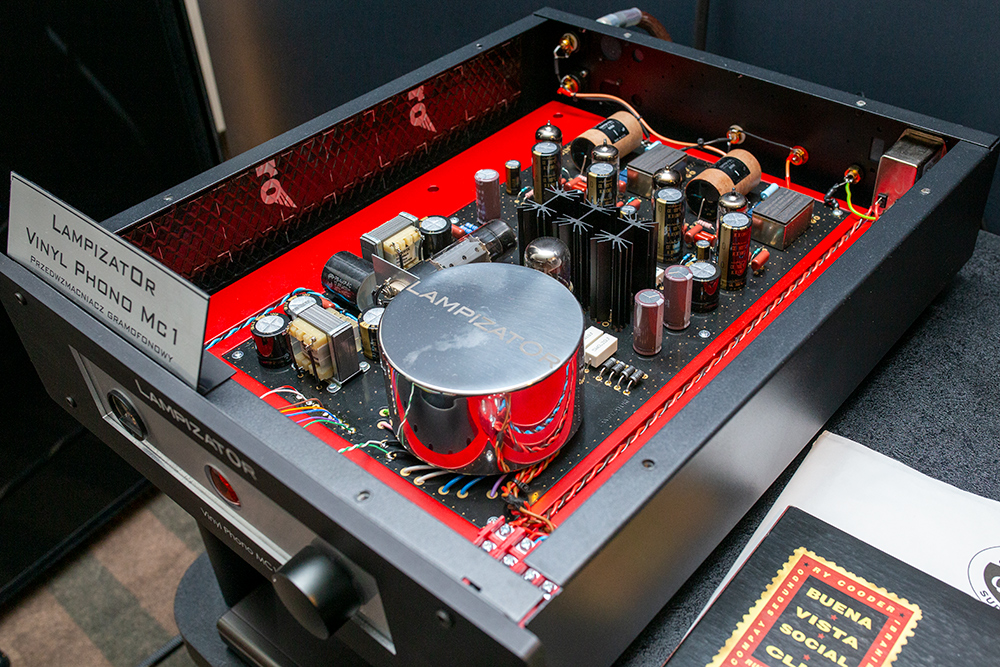 Internally, the MC1 is built with silence in mind. The PCB is four layers, with the signal traveling on layers two and three while the ground plane is relegated to layers one and four. In a further move to remove noise, the circuit board, and thus the tubes, are mounted to a CNC-milled support so there’s zero flex. This helps greatly reduce the chance of microphonics from the tubes. The MC1 is a heroic effort, and at €6600 it seems like one heck of a deal. 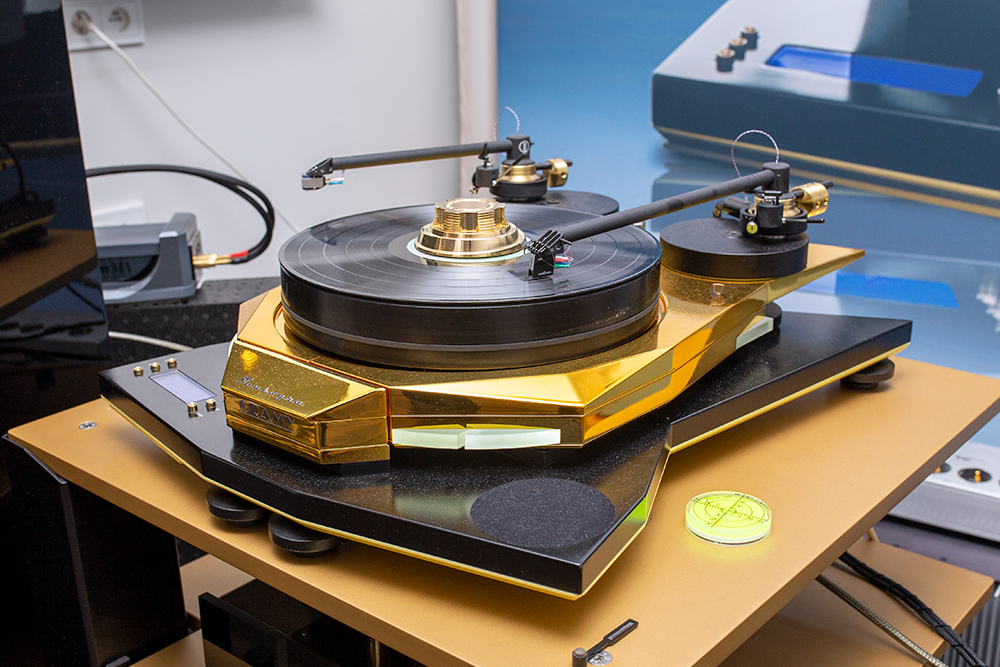 At last year’s Audio Video Show, I was quite impressed with Tentogra’s Oscar turntable -- a big ol’ thing made from a huge chunk of wood and copious quantities of aluminum. The Oscar was battery powered, too. At that time, the company was displaying a prototype of its Gramy turntable, and this year the production version made its appearance.

In order to control resonances, the Gramy is made from two different types of aluminum. The Gramy is designed from the start for two tonearms, with each arm mounted to an independent tonearm board. This permits adjustable VTA for each tonearm -- on the fly, by means of a wheel located at the bottom of the armboard.

An extremely nice idea built into the Gramy is a runtime counter, which helps you keep an eye on the number of hours on your stylus. While the Gramy plugs into wall power, it’s also available with the battery pack used in the Oscar. Also, the Gramy is available painted or anodized in a number of colors. The Gramy retails for €15,000 with one Kuzma S12 arm. 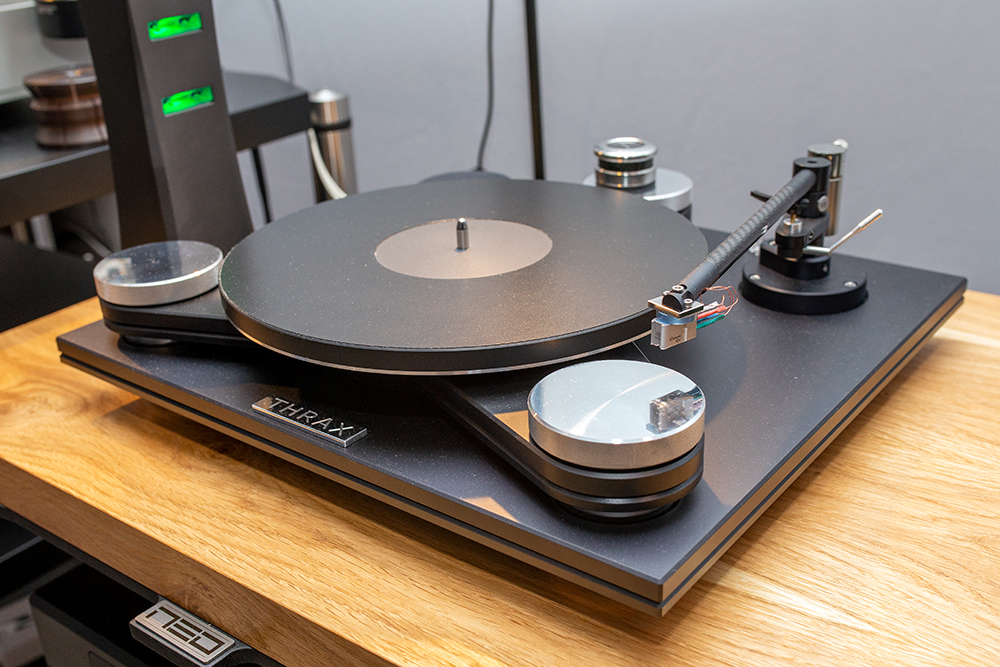 While it looks like a well-made, reasonably sized turntable, the Yatrus, from Thrax Audio, based in Sofia, Bulgaria, hides an intimidating amount of high-tech design under its skin. This direct-drive turntable, which retails for €15,000 including tonearm, rides on a gel-based silicone suspension that resonates at a low, low 6Hz frequency. The chassis is made from four layers of anodized aluminum separated in a constrained-layer-damped sandwich. The top of the platter is made from stainless-steel mesh embedded in a rubber matrix.

The Yatrus’s tonearm, designed by Frank Schröder, employs a wand made from two layers of carbon fiber, each oriented in different directions to help break up resonances. The bearings are magnetically loaded to help prevent chatter. 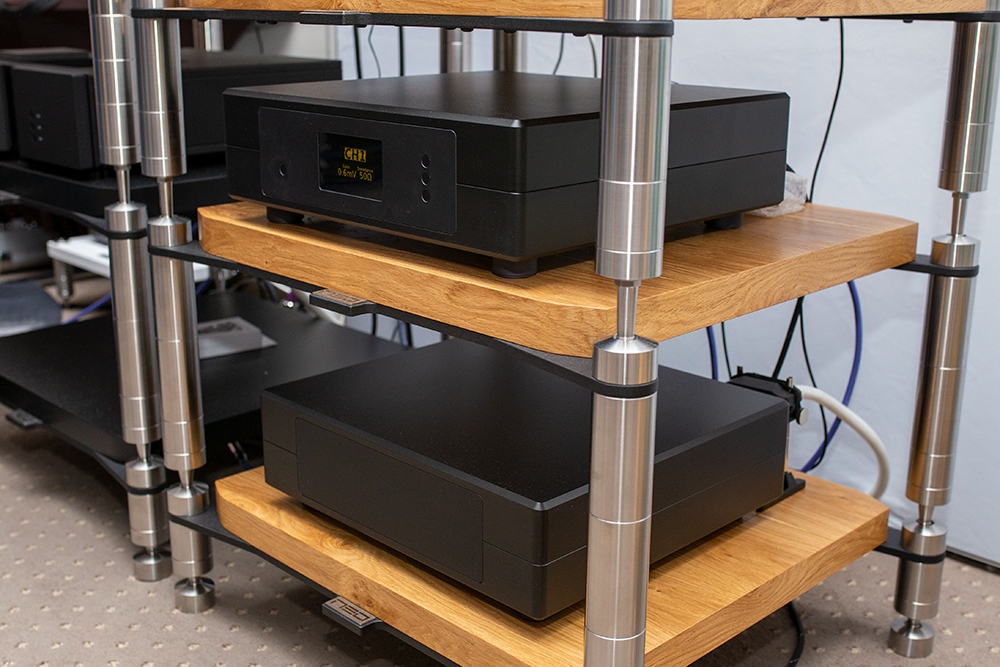 Truth in advertising. The Big Phono, from RCM Audio, which is based in Katowice, Poland, sure is big. This oversized two-chassis unit weighs in at 52kg, and it’s milled from 2.36"-thick sheets of solid aluminum. The big power supply employs two 200W transformers -- great attention paid to power regulation here, folks. According to RCM, the power supply reduces DC pulses down to less than 100 millionths of a volt.

The Big Phono has two inputs, both of which are adjustable by remote control, and all connectors are from Furutech. Appropriately, the Big Phono comes with a commensurately large price tag -- €35,000. 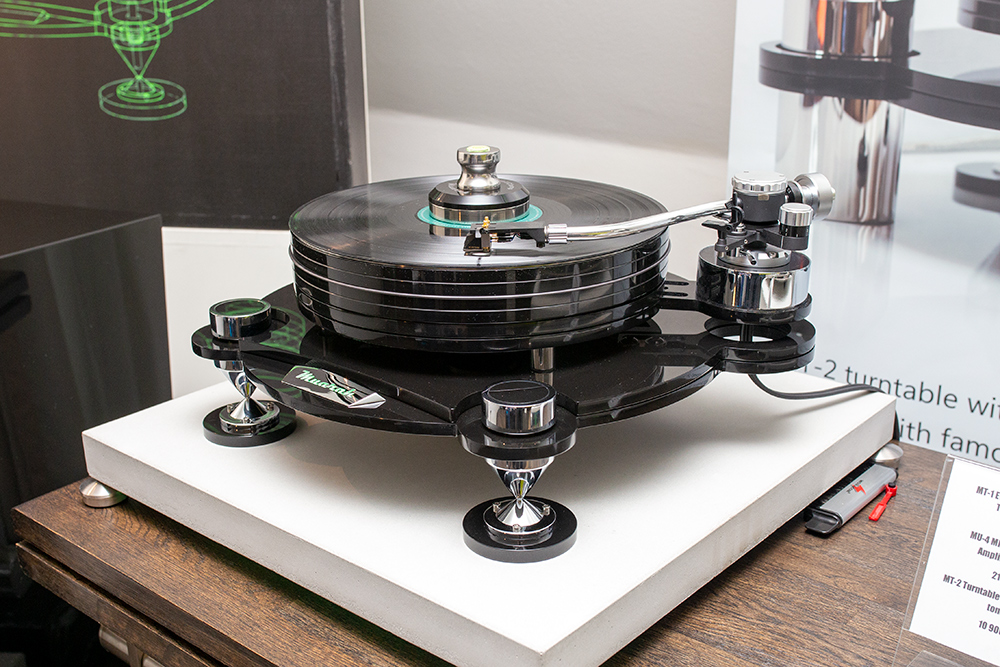 Here’s a new turntable from Muarah, a company out of Warsaw, Poland. There’s a fair bit of forward-thinking going on with this turntable, including a suspension that’s oil-damped, and an acrylic platter that’s mass-loaded with a steel ring for a total mass of 8kg. That steel ring doesn’t actually touch the acrylic platter -- it’s damped in a constrained layer, and the company pays great attention to ensuring that the platter is carefully balanced. The MT-1 EVO retails for zł25,490, including a Jelco 850S tonearm. 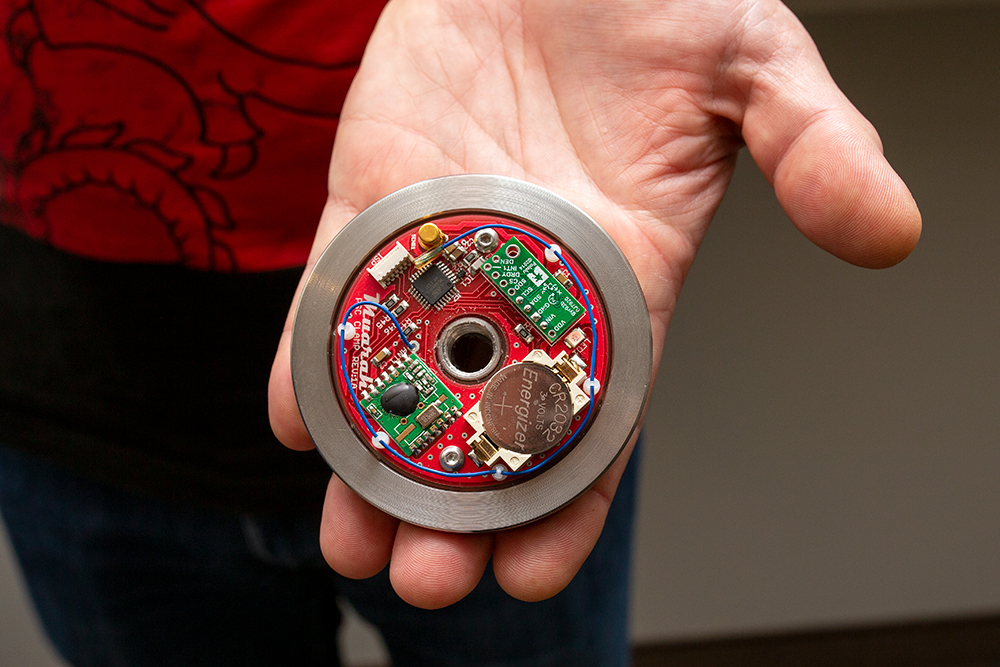 There’s no doubt in my mind that the MT-1 EVO is well engineered, but I think the coolest part of the whole package is the company’s InteliClamp record weight, which contains circuitry that calculates the rotational speed. The weight then wirelessly reports that information back to the PSC Precision Speed Controller, so that it can correct the speed and ensure rotational stability.