By far -- by a zillion, trillion miles -- the most excitement at the 2014 CEDIA Expo centered around the launch of the home version of Dolby Atmos, the technology that adds audio "objects" to the standard 7.1-channel mix, and adds height speakers for additional envelopment. I spoke with hundreds of people at the Expo, and not a single one expressed a negative sentiment about Atmos. All of the demos -- aided by a fresh Atmos demo disc from Dolby -- showed how the technology can add an immediately noticeable sense of realism to home-theater audio.

Some of the demos employed the new "Atmos enabled" speakers, which have drivers firing upward and use a combination of controlled dispersion and audio processing in the receiver to create a convincing illusion that you're hearing ceiling speakers. You can use just two Atmos-enabled speakers in the front, or add two more in the rear for a more convincing sound effect. (Note that upward-firing drivers are deactivated when Atmos is off, so these speakers can work great for stereo, too.)

Other manufacturers used conventional ceiling speakers, which to me sounded better because they don't need the extra processing. In fact, two of the best demos, from Steinway Lyngdorf and GoldenEar Technology, used speakers that have been in the company's line for some time -- yet those ranked among my favorite demos of the show. 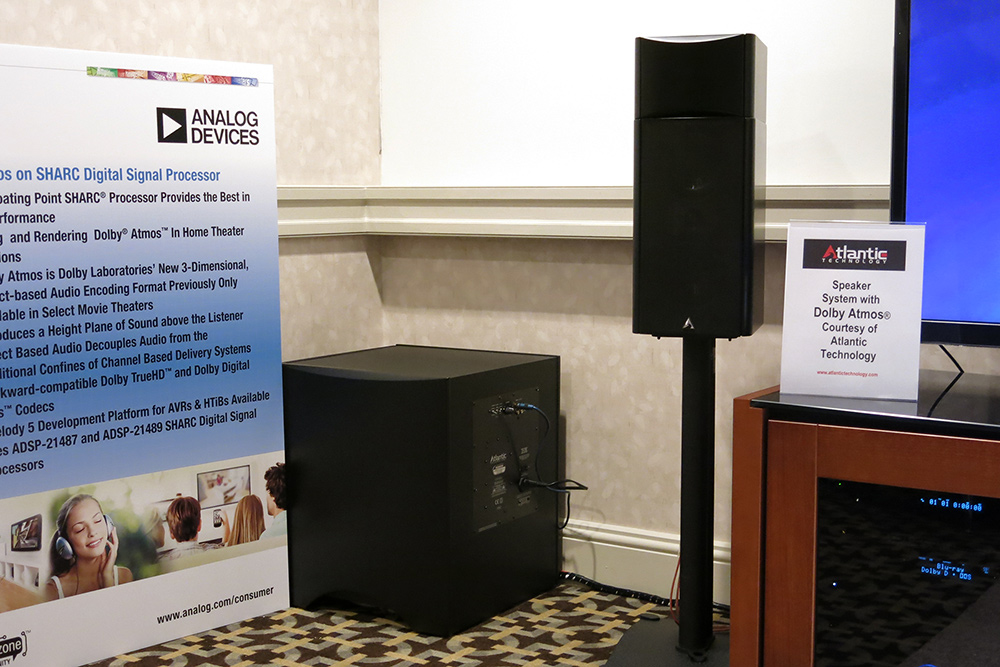 Unfortunately, I missed Atlantic Technology's demo at the Expo, but I got to hear the company's new 44-DA speaker module in a demo conducted by chipmaker Analog Devices. The $449/pair 44-DA fits atop Atlantic's 4400 LR speakers so closely that you don't even notice that there's a separate module sitting on top. Each one has a 5.25" woofer and a 1" tweeter in a concentric array. Maybe it's because Analog Devices' demo was in a small, quiet hotel room instead of in one of the prefab sound rooms on the show floor, but I thought this system delivered perhaps the most precise imaging of the object-based sound effects, such as the spears whizzing toward you in the opening of Star Trek Into Darkness. 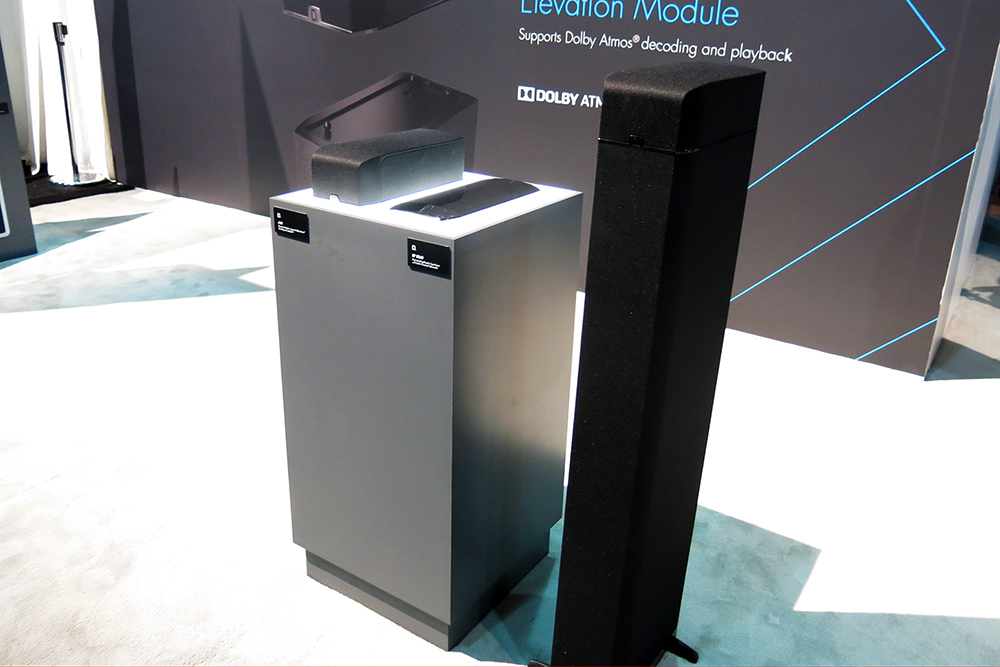 Definitive Technology's $499/pair A60 Elevation Module snaps atop the $1998/pair BP-8060ST tower speaker. Inside is a single 3" full-range driver pointing upward. Why just one driver per module? That's the way Dolby originally designed the Atmos-enabled concept, using the narrow directionality of full-range drivers at high frequencies to help direct the sound at the ceiling instead of at the listener. From what I gathered at CEDIA, though, most manufacturers are using two-way designs for their upward-firing drivers. This should better match the tonality of the front speakers, except that the sound is already going through Atmos processing and bouncing off the ceiling, so I'm not sure that timbre matching is as important with Atmos as it is with conventional 5.1 and 7.1 home-theater systems. 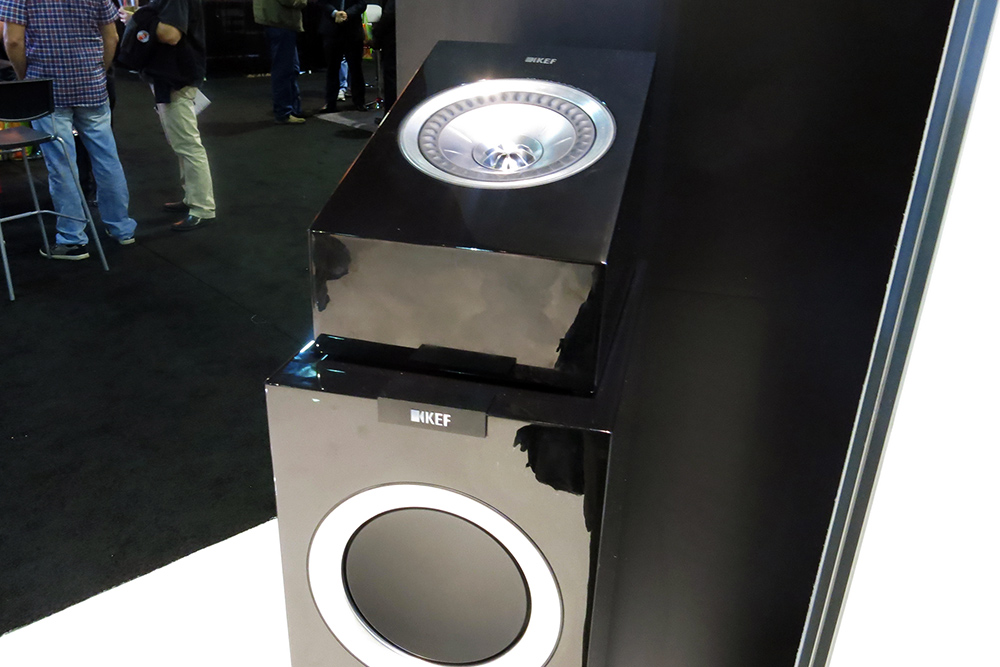 KEF's Atmos-enabled speaker module is the $1200/pair R50, which simply sits atop KEF speakers rather than attempting to integrate with them visually. The upside of this design is that it works with many speakers in KEF's line rather than just one or two. Fittingly, the R50 uses KEF's iconic Uni-Q concentric driver design, with a 1" tweeter nestled into the middle of a 5.25" woofer. Sadly, KEF didn't demo it. 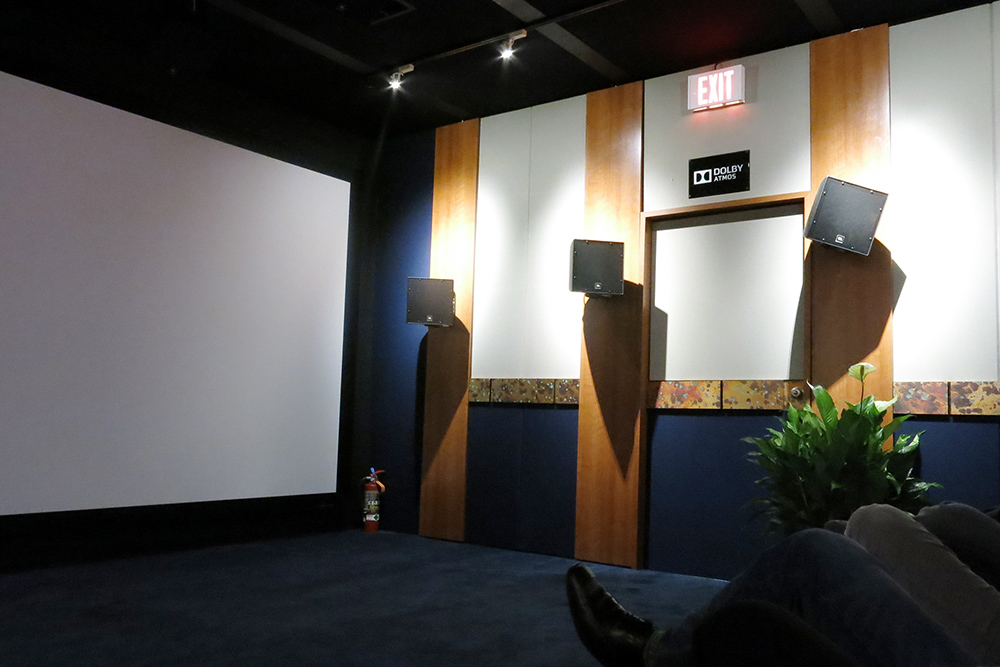 JBL's Atmos demo had much more in common with a commercial cinema system than with something you'd put in your home. It employed a Dolby CP850 Atmos cinema processor; JBL Synthesis' M2 Master Reference Monitor loudspeakers for front left, center, and right channels; 28 SCS8 Spatially Cued Surround speakers (12 on the ceiling and 16 on the side and back walls); eight S2S-EX 15" subwoofers; and the new eight-channel SDA-8300 and four-channel SDA-4600 amplifiers with built-in DSP that works with JBL's ARCOS room-correction system. On one level, the undistorted output and overall fidelity of the system were amazing; but to me, the high volume and the colossal amount of subwoofer power gave it more the feel of an amusement park ride than a cinematic experience. 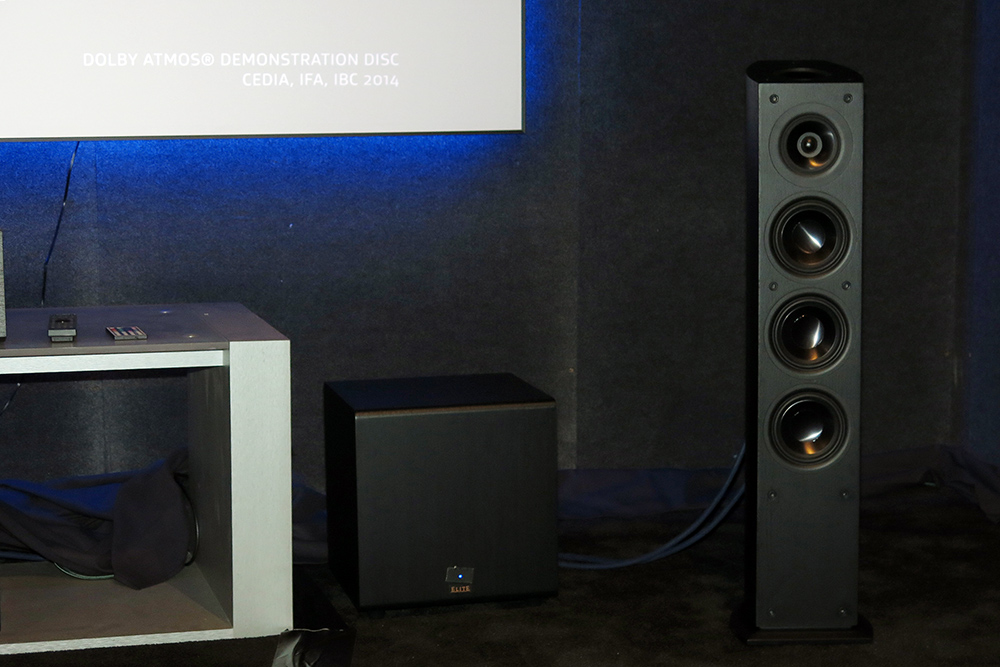 Pioneer broke with the ranks of other Atmos-enabled speaker makers and showed two models with the upward-firing drivers built right in: the $1398/pair SP-EFS73 tower speaker and the $749/pair SP-EBS73-LR bookshelf speaker. Each has a concentric woofer/tweeter array pointing upward; the array essentially matches the concentric array used on the front baffle. The Pioneer system was by far the most affordable Atmos-enabled system shown at the CEDIA Expo, yet the effect was still amazing: a realistic sense of envelopment rather than the mere "wraparound sound" you get with 5.1 or 7.1.

It's worth noting that an Atmos competitor, Barco's Auro-3D, also demoed at the CEDIA Expo; the demo was quite effective when it switched between recordings of ambient noise in a plaza recorded in Auro-3D and in conventional 7.1. The rest of the material didn't impress me so much. I heard no mention at the show of MDA, the DTS-backed competitor to Atmos. Considering the unbridled enthusiasm for Atmos that I heard from manufacturers, dealers, and press, and the convincing nature of the demos I heard, Atmos looks like it might be a big success that no competitor can catch.

Of course, the demos for Dolby Pro Logic IIz were great, too. But the home experience didn't live up to the demos, and the technology went nowhere. We'll see . . .