The annual CEDIA (Custom Electronics Design and Installation Association) Expo is probably the world's largest showcase for audio products in the high-end home-theater and multiroom-audio fields. From a speaker standpoint, the Expo is dominated by in-wall/in-ceiling, outdoor, and surround-sound speakers, but there are usually several new loudspeakers targeted at audiophiles -- including some elite in-wall models that can give freestanding tower speakers a run for their money.

I spent a couple of days at last week's CEDIA Expo in Dallas, Texas, USA, and returned with a suitcase full of information and a camera full of pictures. I picked out ten of the products I found most interesting. There are some for which I couldn't or didn't get good pictures, but I'll mention a couple here anyway: GoldenEar Technology's $1999 (all prices in USD), 1600W SuperSub XXL subwoofer, which delivered immense power even when paired with ceiling speakers, and James Loudspeaker's new Q-series, a gorgeous trio of quad-tweetered towers ranging from $10,000 to $30,000 per pair. 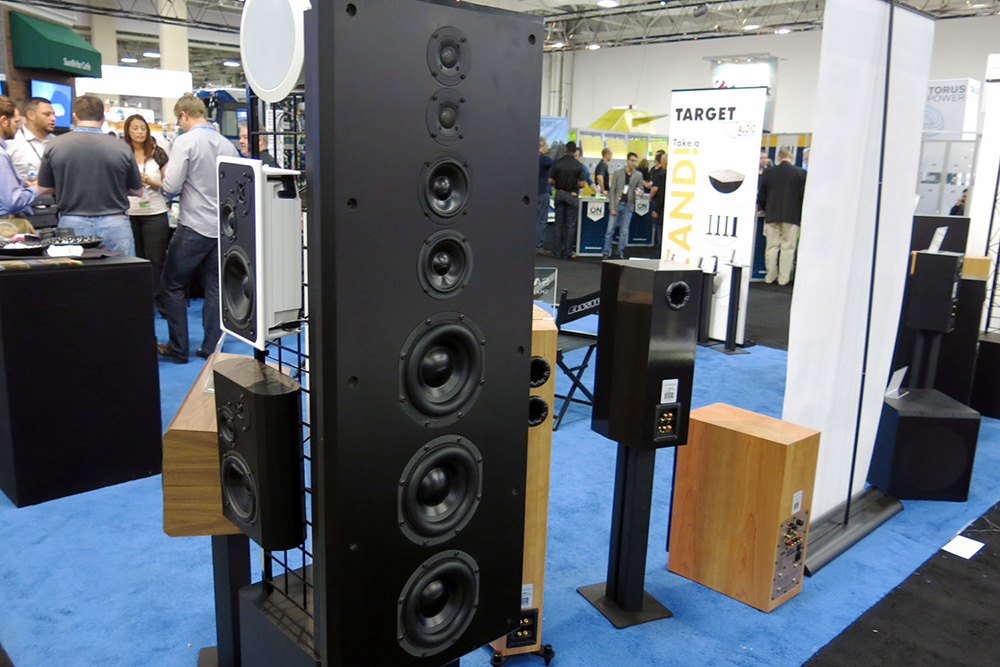 Bryston is, of course, best known for electronics, but its speakers, designed and built by Axiom Audio, have recently won considerable acclaim among audiophiles. The $7895/pair Custom Model T adapts the components and acoustics of the flagship Model T speaker to an in-wall design. The entire speaker enclosure is made from MDF instead of the plastic or metal used for most in-walls. It doesn't mount quite flush: the front baffle sits out about 1" from the wall. Bryston's James Tanner told me there was no way to get the polar (i.e., off-axis) response right with the speaker mounted completely flush. In-wall versions of the Middle T and Mini T are soon to follow.

Usually when someone touts a revolution in speaker design, it's not really revolutionary and its advantages underwhelm. Thus, despite the reputation of audio expert Anthony Grimani, I doubted that his new line of speakers, sold under the Grimani Systems brand, would impress me much. But everything about Grimani's new system astonished me, from the configuration to the design details to, most important, the sound quality -- so much so that I went around the rest of the day insisting that my pals in the press go hear it. 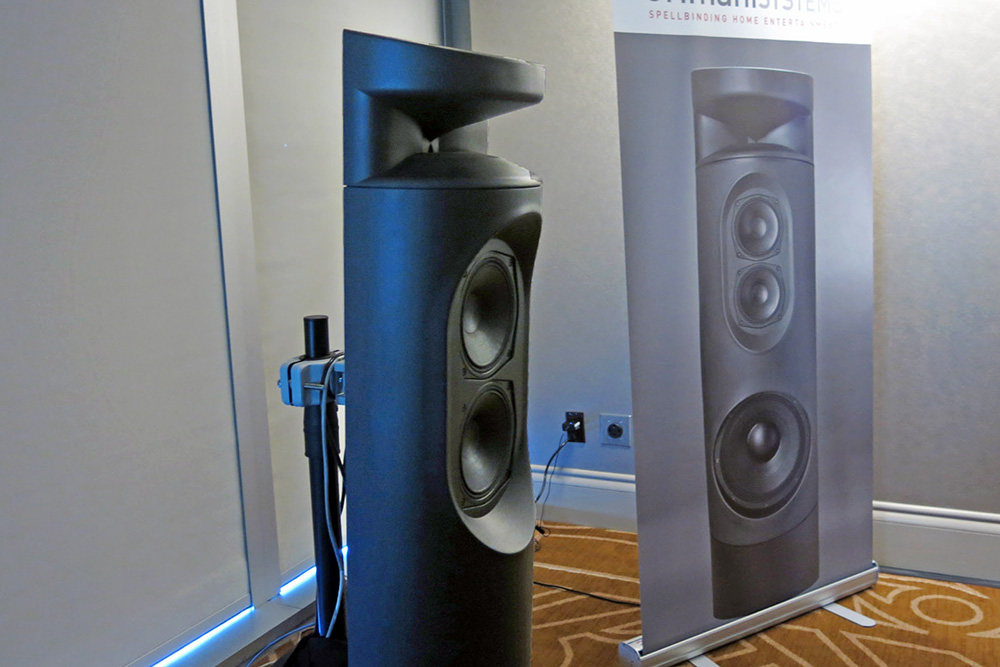 The genesis of this system was a list of 50 problems that Grimani and his colleagues keep encountering in their acoustics consulting practice. One of the key problems is that only a few seats in a typical home theater or listening room really sound good. To combat this problem, system designer Manny LaCarrubba engineered the Grimani Systems speakers to have far broader, more consistent dispersion than any conventional speaker. He achieved this largely through the use of a $450-each German-made compression driver feeding a 180-degree waveguide, and crossed over to the dual 6.5" woofers at a very low 1kHz. Grimani insisted that the speakers would create a solid center image even if we stood between them, and to my surprise they did -- but perhaps more important, the tonality didn't change significantly off-axis, and I got a nice sense of stereo no matter where I stood in the room. Each speaker has two 500W amps and a digital signal processing engine built in, and includes analog, digital, and network connections. The Beta speaker shown here costs $20,000 each, while the larger Alpha costs $30,000 each. High prices, certainly, but there are many pricier systems out there that can't do what this one does. 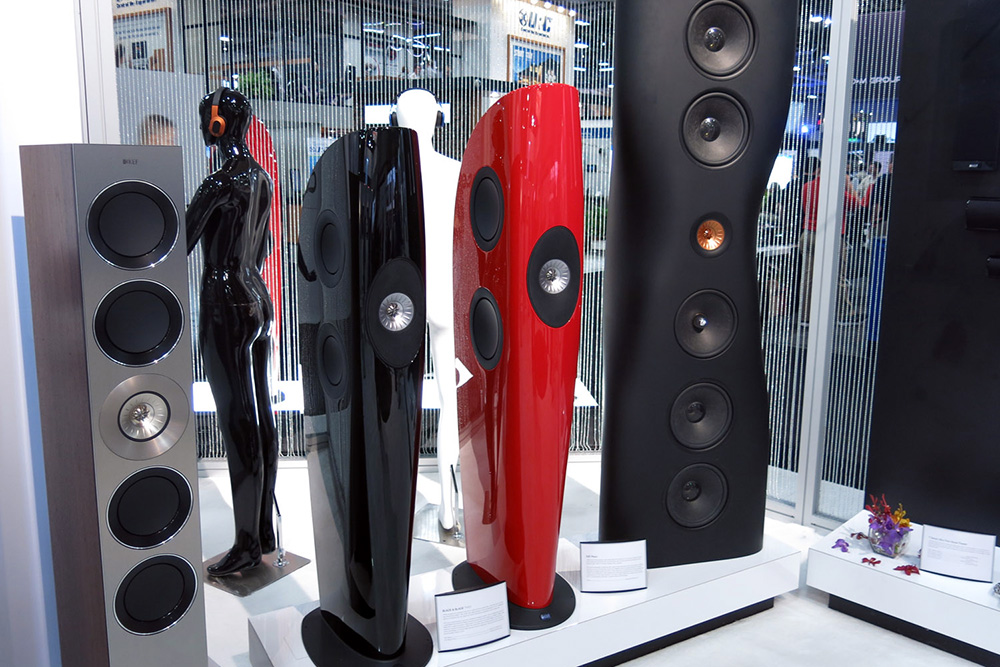 KEF showed updates to numerous speakers in its line as well as several new models. The two most elite introductions are the Stealth Muon at far right and the Blade Two, the gloss-black speaker to the left of the gloss-red speaker. The $24,999/pair Blade Two is a smaller, more affordable version of the original Blade (the gloss red model shown here) that uses the same driver array as the Reference 5 tower speaker at far left. The $225,000/pair Stealth Muon substitutes a matte black finish for the original Muon's polished aluminum finish, and gets the same refined Uni-Q coaxial tweeter/midrange driver used for the Blade and Blade Two. 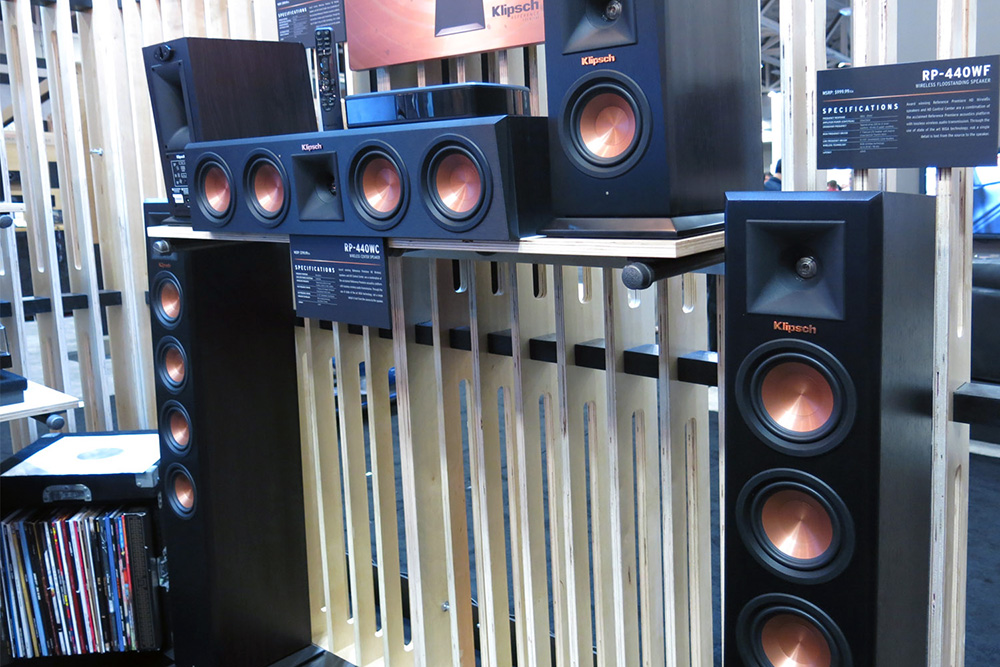 Klipsch is trying to improve the reputation and performance of wireless audio with its new line of powered speakers using WiSA technology. The $999-each RP-440WF tower speaker shown here incorporates four 4.5" woofers, a 1" horn tweeter, and a 125W internal amp. The $999/pair RP-140WM bookshelf speaker has the same tweeter, just one 4.5" woofer, and a 50W amp. A wireless center speaker and subwoofer are also available. Klipsch offers a WiSA transmitter that can handle up to seven speakers and two subwoofers; it offers four HDMI inputs, Bluetooth, and TosLink and coaxial digital inputs. 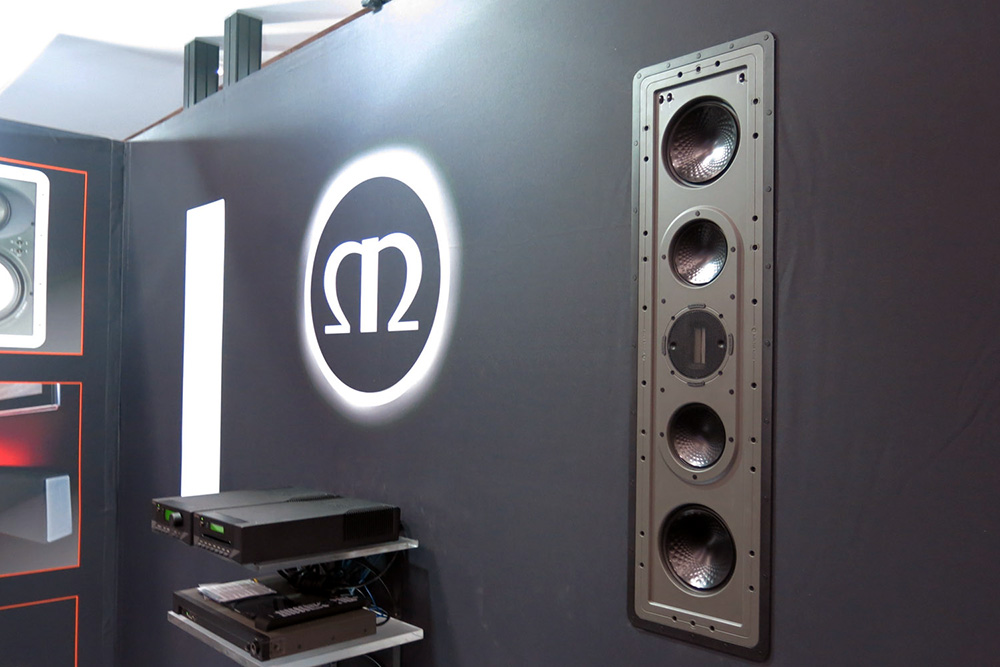 Monitor Audio, perhaps best known for its consistently good tower speakers, is expanding its presence in architectural audio with a couple of new high-end in-wall models. The one you see here is the CP-IW460X. It uses the same ribbon tweeter found in Monitor's Gold-series speakers, and adds two 4" mids and two 6" woofers. The cones all feature Monitor's Rigid Surface Technology (RST), which uses golf-ball-like texturing for greater stiffness. The speaker's frame and baffle are also made for extra stiffness: they're fabricated from cast aluminum. The CP-IW460X is expected to ship in November for a price in the $2400-to-$2600 range per speaker. A less elite model, the $1200-to-$1400 CP-IW260X, was also shown at the CEDIA Expo. 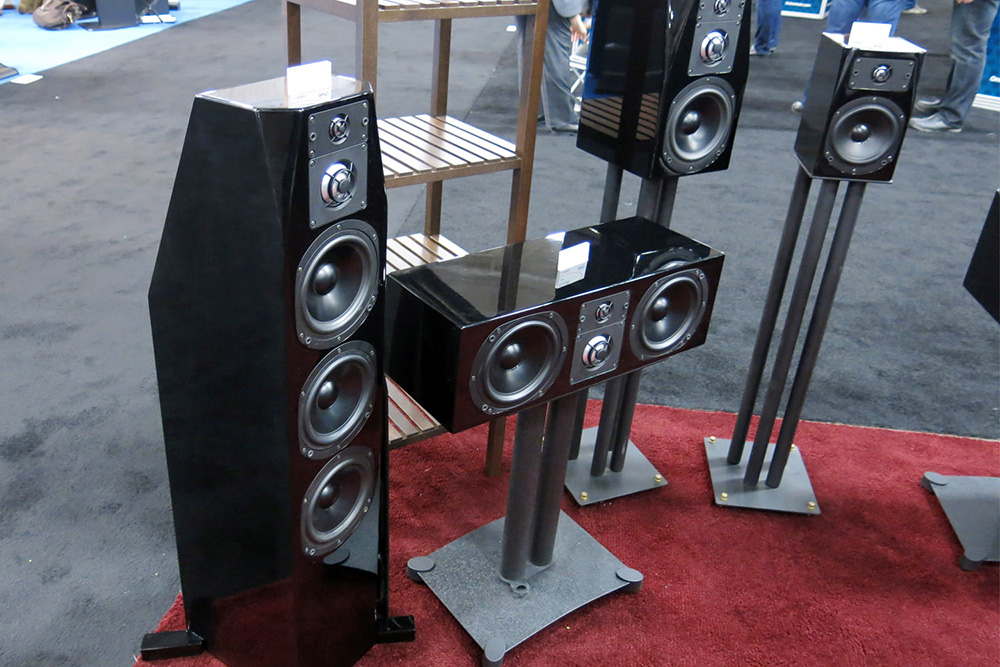 For a small speaker company in a tiny, open stand, NHT had an amazingly large array of new products. The speakers you see here are the new C series, an update and redesign of the company's longstanding Classic line. The $1000-each C-4 tower dispenses with the side-firing woofers in its predecessor, the Classic Four, moving all drivers to the front baffle and, according to NHT, achieving improved sensitivity and higher playback levels in the process. The $250-each C-1 and $500-each C-3 bookshelf models are also available, along with the $500-each C-LCR center/LCR speaker. Add the $100-each Atmos Mini module and you can use the C-4 and its other C-series brethren in a Dolby Atmos/DTS X system. There are also the new Media-series speakers, which have upfiring Atmos drivers built in, plus a couple of new subwoofers. 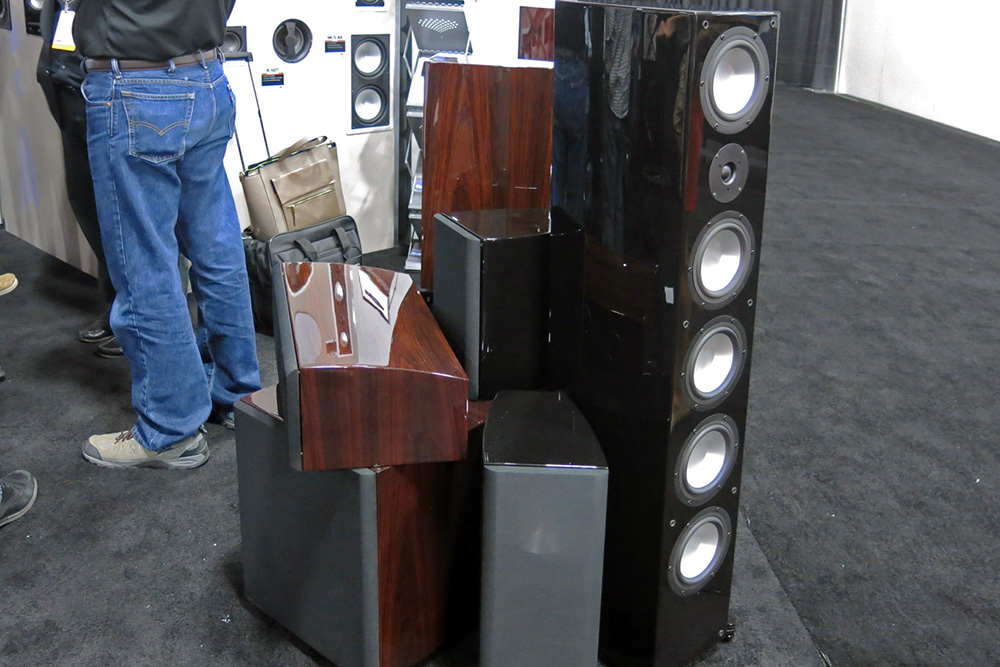 RBH's new SV line replaces the more expensive SX line. "The story is just higher performance at a lower price," marketing director Daren Egan told me. Indeed, the SV-6500 tower speaker costs $2500/pair, $780 less than the SX-6300 it replaces. It houses five of RBH's trademark aluminum-cone drivers plus a Vifa silk-dome tweeter. The line includes bookshelf, center, and surround speakers, and is slated to ship around the end of November. 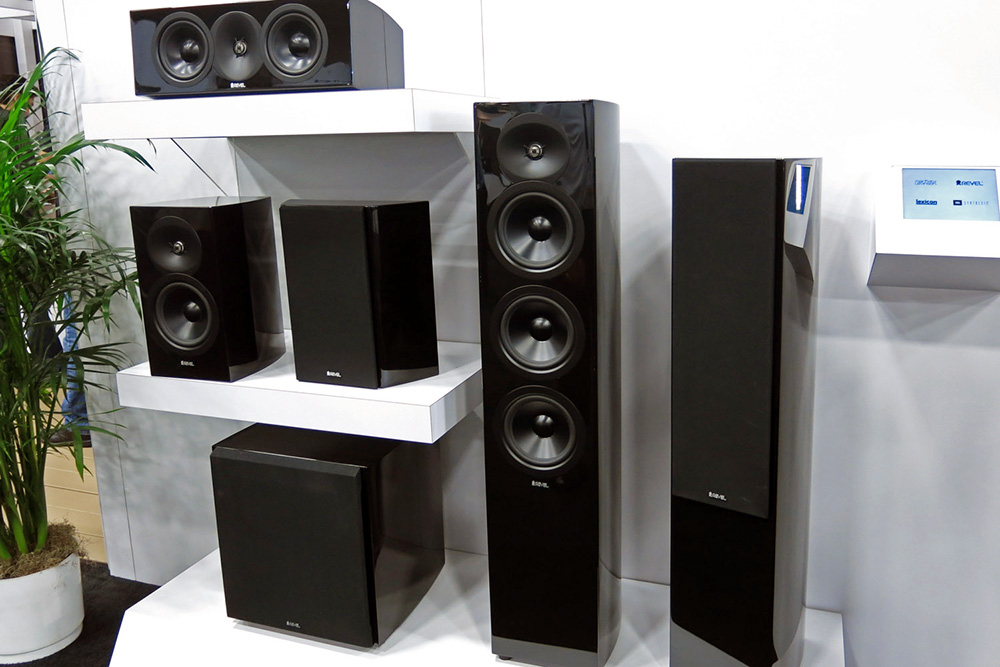 The 2015 CEDIA Expo marked the official debut of Revel's Concerta2 speakers, which come in at surprisingly low prices (for Revels), yet according to my ears sound shockingly close to last year's much more expensive Performa3 speakers. (I use the Performa3 F206 tower as my primary reference speaker.) After appearing in prototype form for about a year, the speaker is finally slated to ship in the next couple of weeks. The top-of-the-line F36, the tallest of the two towers shown here, runs $2000/pair, and the smaller F35 tower costs $1500/pair. Both are sleek designs that use magnetically attached grilles, so there are no visible fasteners on the front baffle. The cabinets are available in gloss black or gloss white, and center, surround, and subwoofer speakers are also available. 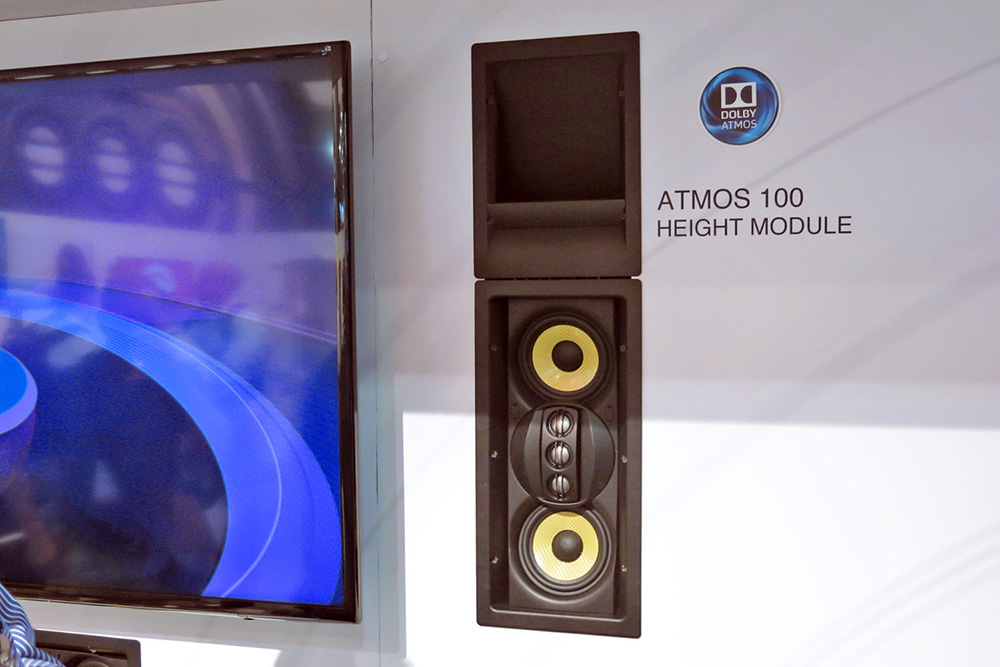 My favorite of the conventional -- well, relatively conventional -- in-wall speakers shown at the CEDIA Expo was the SpeakerCraft AIM LCR Five. That's partly because of its unique tweeter array, and partly because of its unique optional upfiring array for Dolby Atmos. The AIM LCR Five was designed to offer broader dispersion, and thus a more spacious stereo soundstage, than most in-walls. The center tweeter has different crossover filtering than the two tweeters flanking it, so the array can deliver high output without lobing and comb-filter effects common to speakers using two or three tweeters, and it can rotate 90 degrees if you want to use the speaker horizontally. The angled woofers are also said to reduce lobing. The optional Atmos 100 array uses two 2.5" midrange drivers and a 1" tweeter in an upfiring arrangement; it's the first in-wall implementation of Atmos-compatible upfiring speakers. A foam-lined waveguide directs the sound toward the ceiling, and even on the show floor, I got a strong "ceiling bounce" effect from the little faux ceiling SpeakerCraft had rigged up. No prices have been set, and the speakers won't ship until probably Q2 of 2016. 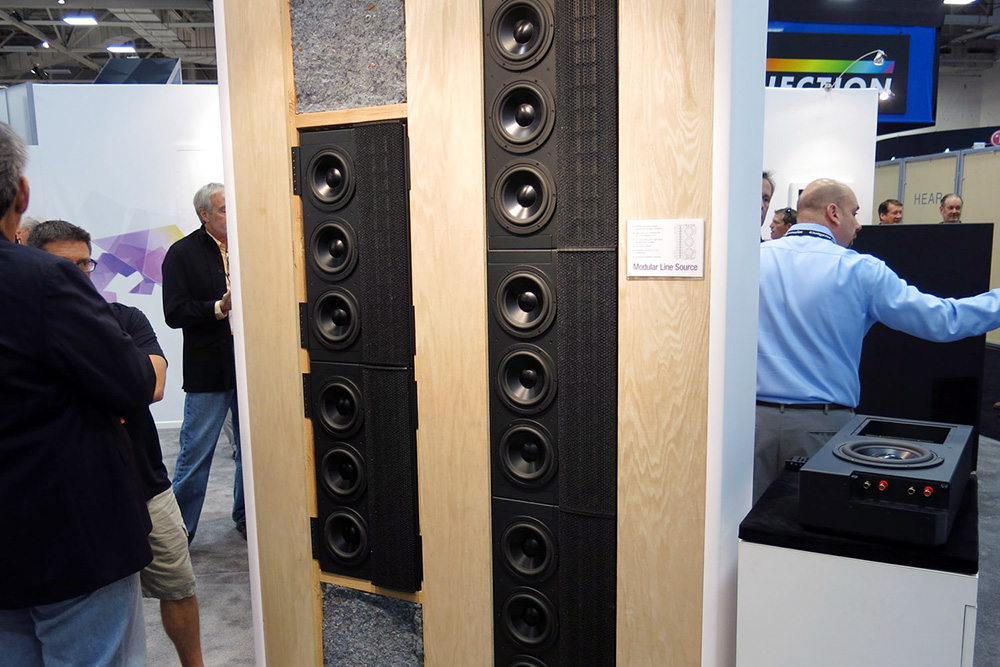 Wisdom Audio is one of the few speaker companies that focuses on the CEDIA market yet has earned respect from audiophiles, but it's best known for expensive in-wall ribbon speakers that stretch almost from floor to ceiling. The new Sages Series Modular Line Source speaker is easier to accommodate and afford. Each $5000, 25"-high module incorporates three 6.5" woofers and a planar-magnetic midrange-tweeter driver that runs top to bottom and covers everything above 275Hz. You need at least two stacked modules per channel to get a line-source effect; if you want more sound, add one or two more modules per channel.