If you’re looking for new high-end stereo gear, the annual CEDIA Expo isn’t the best place to go; the focus at the Expo is always on things like multiroom audio and home theater. But there are always at least a few new stereo amps, preamps, and source devices, and the technology is often more advanced than what you see at, say, Rocky Mountain Audio Fest.

In my two-day stroll around last week’s CEDIA Expo in Dallas, Texas, USA, I found a few new stereo audio products that will certainly be of interest to two-channel audiophiles, as well as a few that might indicate the future technological directions of high-end stereo gear. Apologies to any manufacturers I missed -- it’s a big show and I’m just one reporter. All prices in USD. 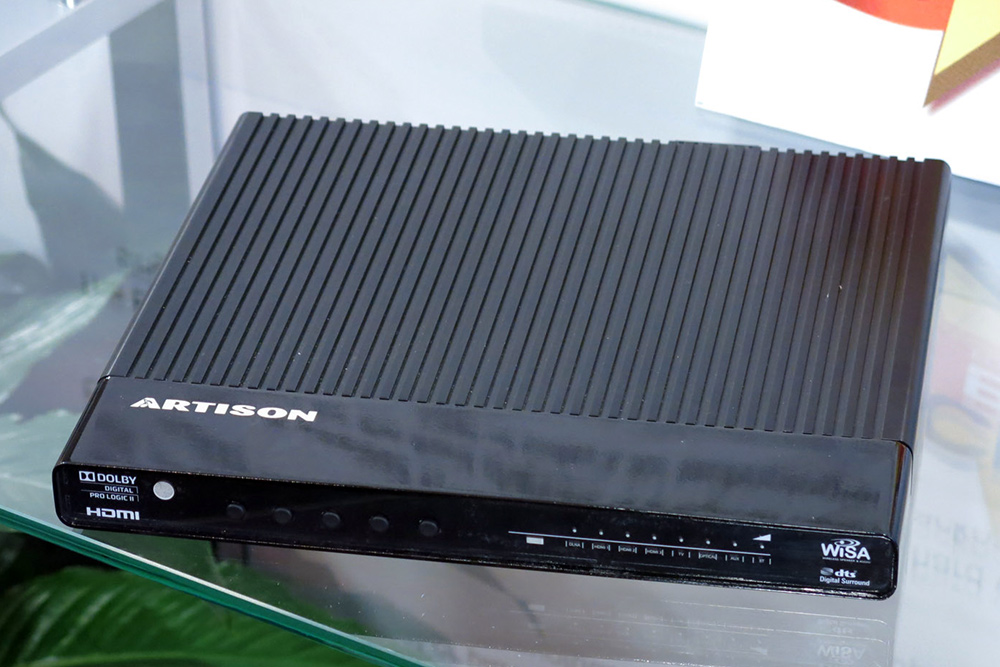 The $999 Nano Backpack WP is speaker-maker Artison’s first foray into audio electronics. Artison calls it an audio hub, which seems fitting because the 1"-high amplifier is packed with all sorts of audio capabilities. It includes three 100W class-D amplifiers; HDMI, TosLink, and analog inputs; Bluetooth; WiSA wireless connection to surround speakers and subwoofers; Dolby Digital, Pro Logic II and DTS decoding; and remote control. The idea is that you can slip the slim amp behind a TV set, into a cabinet, onto a shelf, or wherever, and it’ll serve as the brains and the brawn of either a stereo or surround-sound system. 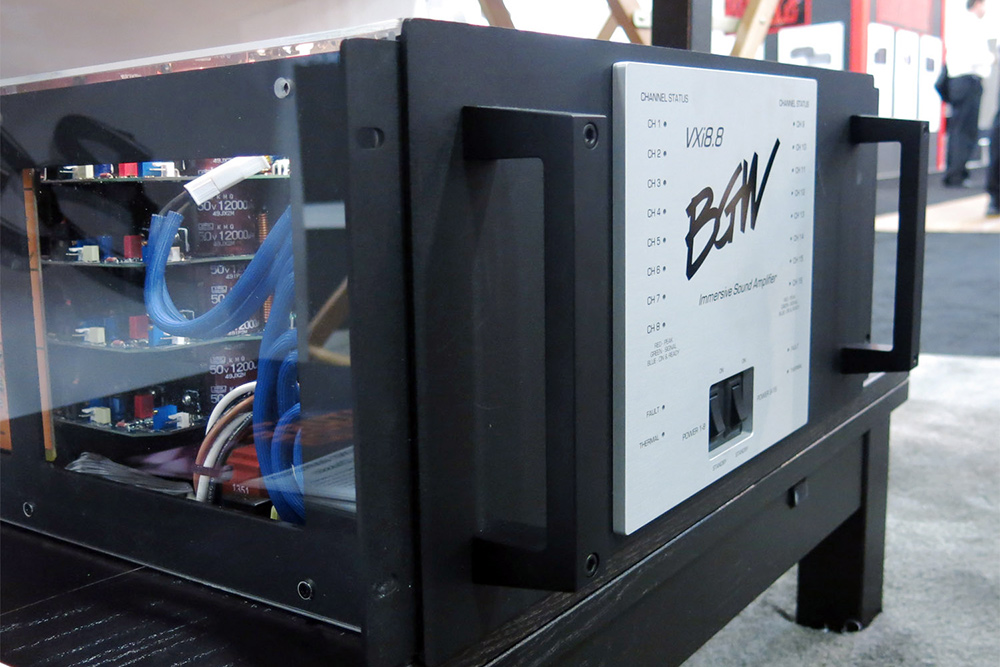 Technically, BGW’s $8890 VXi8.8 is a professional amp, but it was on display at the CEDIA Expo and it was well worth a look. Each of its 16 channels is rated at 200W into 8 ohms, with a fully balanced circuit topology identical to that of the ATI AT6000, which the same parent company makes. To maintain the balance between positive and negative halves of the signal, each channel has its own H-PAD digital volume control, which uses the same resistor to set the gain separately for the positive and negative halves. Users can monitor the amp’s operation through the Internet on iOS devices, showing which channels are active, whether or not a channel has hit its limiter, etc. Company head Morris Kessler showed me how he could monitor a beta sample that was currently running in a Los Angeles movie theater. 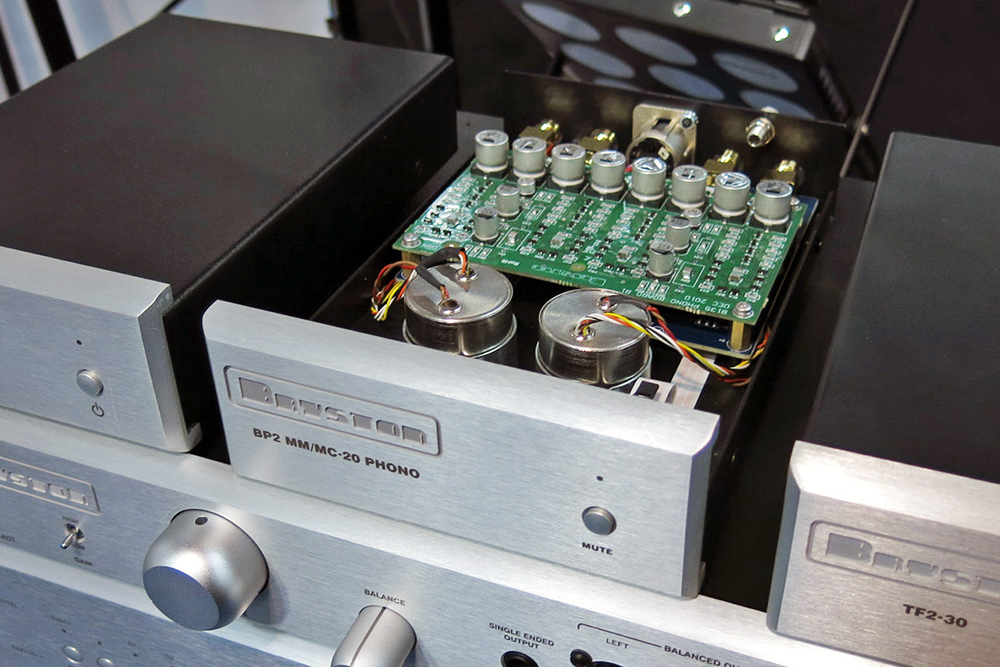 Bryston’s BP2 was the only new phono preamp I saw at the CEDIA Expo. In a nod to hardcore vinyl enthusiasts, it uses old-school transformers, rather than active amplification circuitry, to step up the voltage from moving-coil cartridges to moving-magnet levels. You can see the transformers in the photo; they’re encased in shielding cans made from sheet aluminum. The transformers are available in a separate component, the TF2, for those who already have an MM phono pre. The price of the BP2 is expected to be around $1400 with its stock power supply. An upgraded, separate power supply, the PS3, is available for $1000. 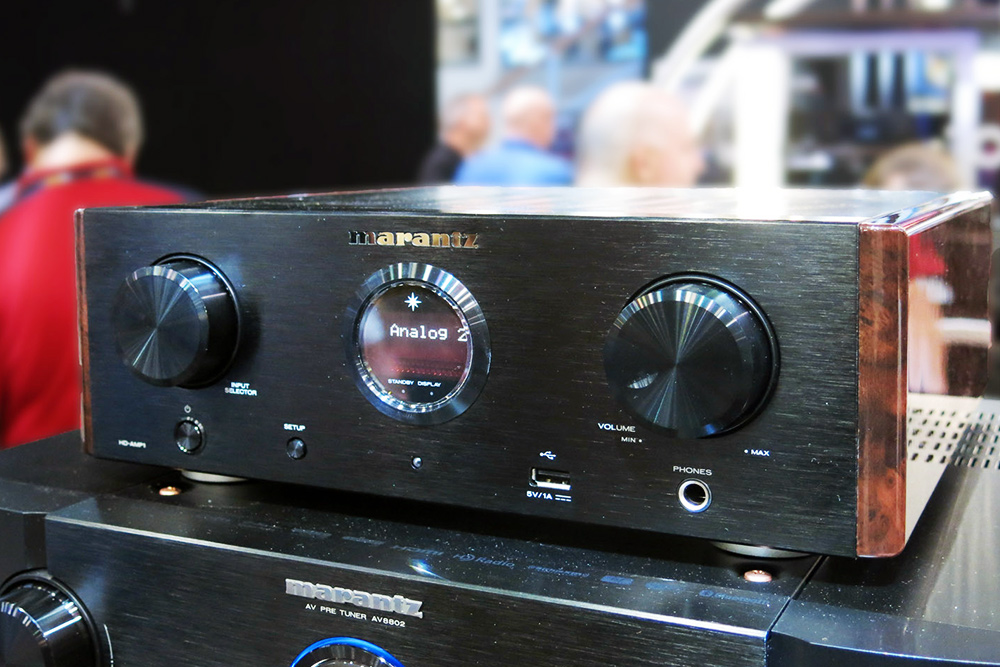 The $999 HD-Amp1 is Marantz’s entry into the increasingly prominent all-in-one integrated amp-DAC category. Its DAC section accommodates PCM signals up to 32/384 resolution, as well as DSD up to 11.2MHz. USB, TosLink, and coax inputs are provided along with two analog inputs, and there’s an extra front USB input intended for portable devices and USB sticks. The internal class-D amp is rated at 70Wpc into 8 ohms, and there’s also a 1/4" headphone jack. A version without the amp, the HD-DAC1, is also available. 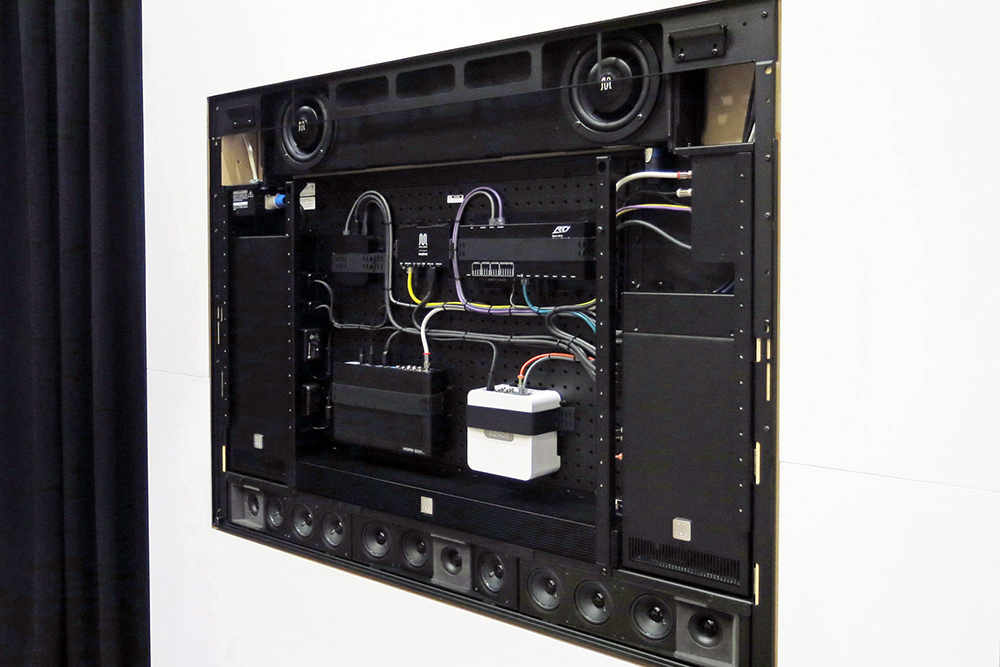 Millson’s CinemaFrame doesn’t resemble anything in high-end audio, but still, it’s so cool and creative I couldn’t resist including it here. Developed by a Vancouver, Canada-based custom-installation firm frustrated by the difficulty of finding space for an equipment closet in high-rise condos, the CinemaFrame incorporates all the electronics and many of the speakers required for both a home theater and a multiroom audio system -- and the whole thing hides behind a flat-panel TV. The rack shown here incorporates a custom-designed 12-channel digital amplifier; left, center, and right speakers plus a subwoofer; surround-sound decoding; full digital signal processing (including subwoofer crossover) for every speaker; a set-top box (i.e., cable box or satellite receiver); Apple TV and Sonos components; and a network hub. The Millson-supplied components snap into the rack in minutes, interconnecting with terminals only, no wires. Each system is custom-specified, and the one shown here costs about $30,000 installed. 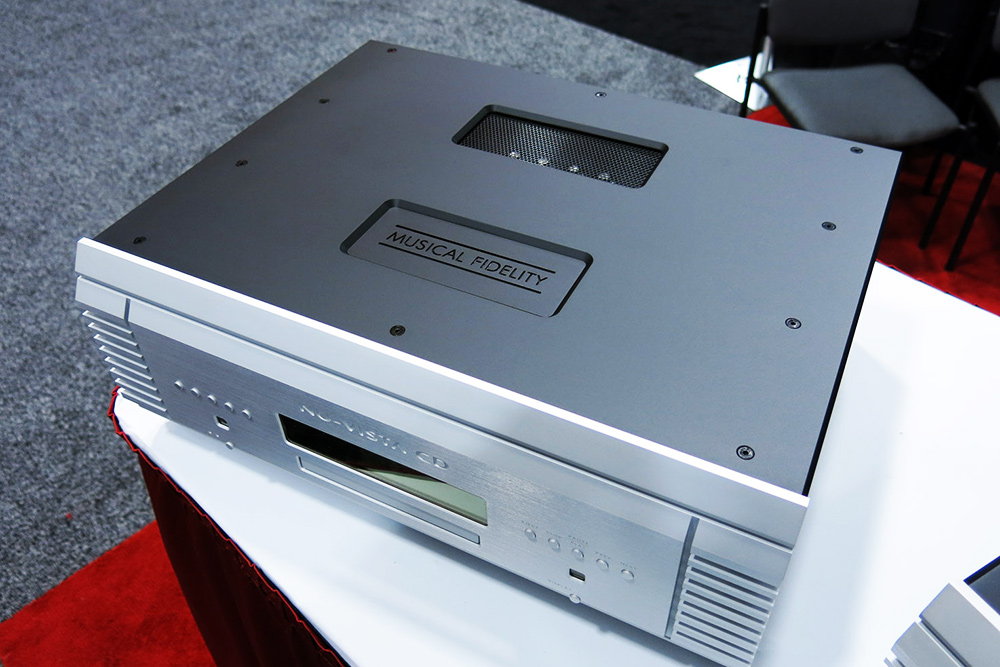 For years, Musical Fidelity has been using nuvistors -- tiny, metal-encased vacuum tubes developed in 1959, just before transistors became popular -- in its electronics. The latest is the $9999 NuVista CD, a CD player that uses a quartet of nuvistors (seen beneath the grille on the top of the component) in its output stage. According to Musical Fidelity’s Randy Bingham, the nuvistors typically last about 100,000 hours, and achieve far superior performance compared to the small-signal tubes (such as the 12AX7) commonly used in audio electronics. The NuVista CD has a 32/384 digital-to-analog converter with four digital inputs that allow it to be used as a DAC for other components. It’s designed as a pure PCM device; it doesn’t play SACDs or decode DSD. 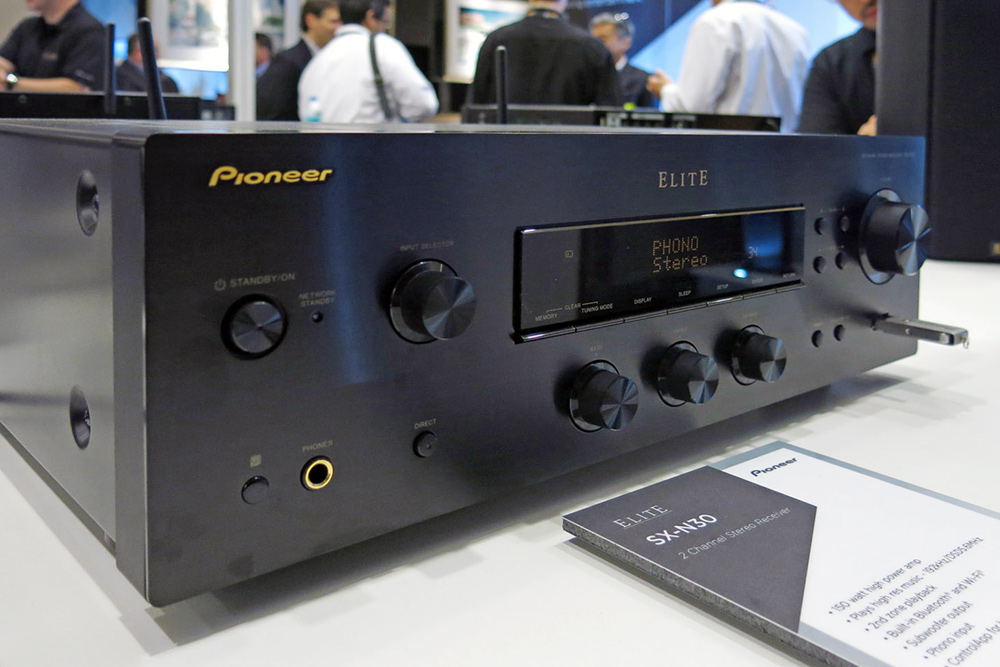 While Pioneer’s SX-N30-K may look like a rather ordinary stereo receiver, it’s anything but. It’s a networked product compatible with Apple AirPlay and DLNA multiroom audio technologies as well as Bluetooth wireless, and it can be controlled from portable devices via an iOS/Android app. A USB front input and TosLink and coax digital inputs make the SX-N30-K compatible with almost any modern source device, and there’s even a built-in phono preamp and a subwoofer output. Price of the 85Wpc receiver is projected to be around $600. 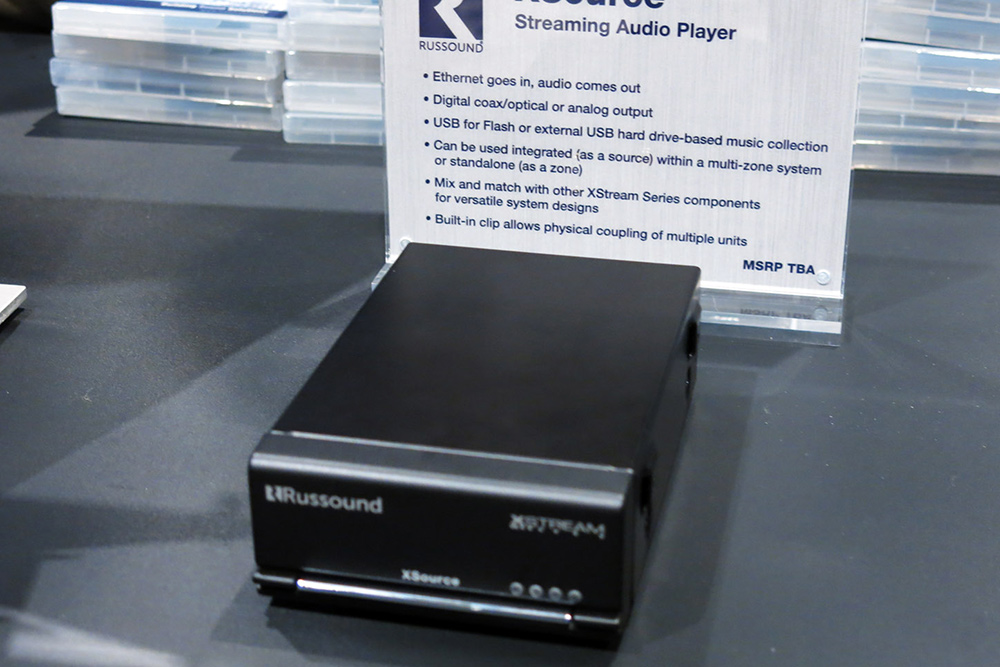 Russound’s XSource streamer was designed primarily for use in multiroom audio systems, but it’d make a nice addition to a stereo system, too. Through Russound’s iOS/Android app, the XSource can stream Spotify, Pandora, SiriusXM, TuneIn Radio, and vTuner, and through AirPlay or DLNA, it can also pull material from networked hard drives. Or it can connect to USB drives and sticks to stream their material into a system or throughout a home. The XSource includes TosLink and coaxial digital, plus RCA analog outputs, so it can connect to an external DAC or digital preamp. It’s said to support high-resolution audio, but I couldn’t get the info on exactly what formats it supports. The price still hadn’t been set when I saw it at the Expo. 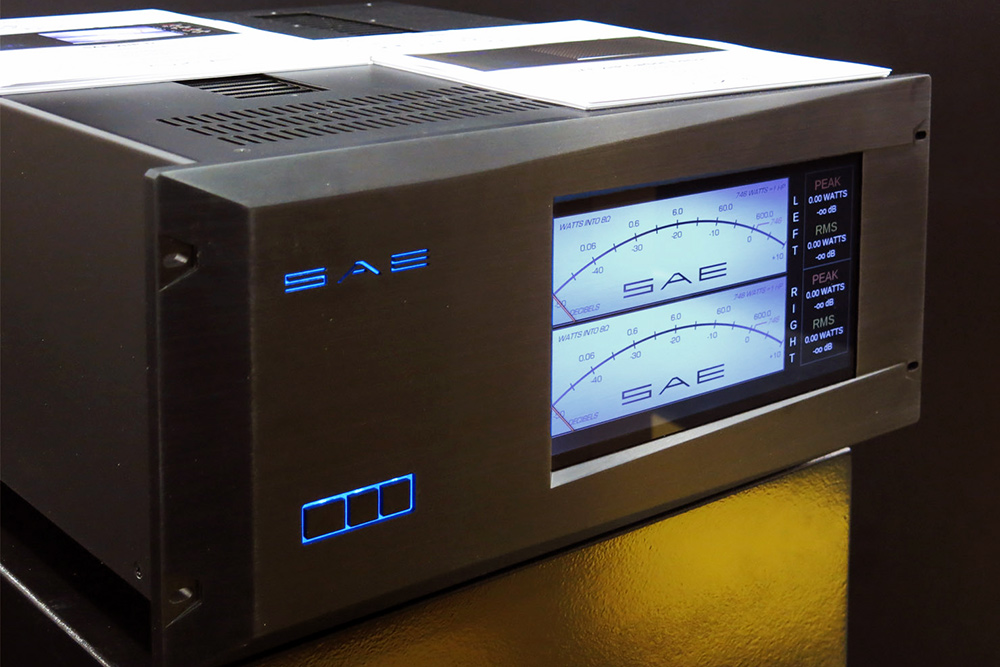 The 2HP was not only the most impressive stereo amp I saw at the CEDIA Expo; it also represents the rebirth of SAE, a classic audio brand from decades past that was founded by Morris Kessler, best known as the founder and chief engineer of ATI. It’s called the 2HP because it puts out two horsepower, or two channels rated at 746W (one horsepower) each into 8 ohms. The display on the $19,995 class-AB amp can be set to function as a power meter (in peak or RMS, for 8- or 4-ohm loads) or as a real-time frequency/level analyzer. 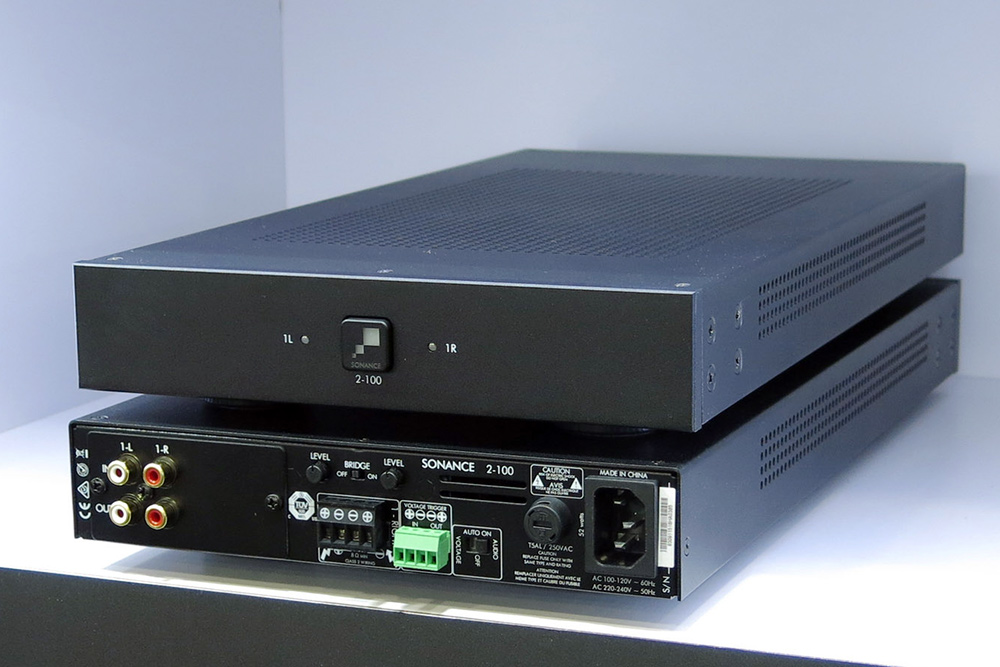 I loved the way Sonance has capitalized on the power of digital signal processing in its latest amplifiers, but lamented that the same tech is rarely available in high-end stereo products. The $699 2-100 100Wpc class-D amp shown here isn’t new, but it and other Sonance digital amps benefit from a new, greatly expanded SONARC DSP programming environment that allows installers to fine-tune the performance of each Sonance speaker for different acoustical environments; the installer simply selects the speaker model and the type of environment it’s going into. To create the more than 600 available presets, Sonance measured its speakers in five different rooms. There are even presets for situations where the speaker is near such acoustically troubling objects as a large window or glass wall. The installer can also tap into ten bands of parametric equalization, tone/tilt controls, limiter, and subwoofer crossover functions.