On Thursday, September 7, the 2017 CEDIA Expo opened at the San Diego Convention Center, displaying what is surely the world’s largest assortment of audio and video gear designed for custom installation. The CEDIA Expo focuses mostly on large home-theater systems, in-wall and in-ceiling audio systems, and outdoor audio products, but it also tends to feature a good number of stereo music products and often a smattering of mass-market stuff such as headphones and Bluetooth speakers.

I’ll start my coverage of the show with a roundup of some of the coolest subwoofers I found. All prices in USD. 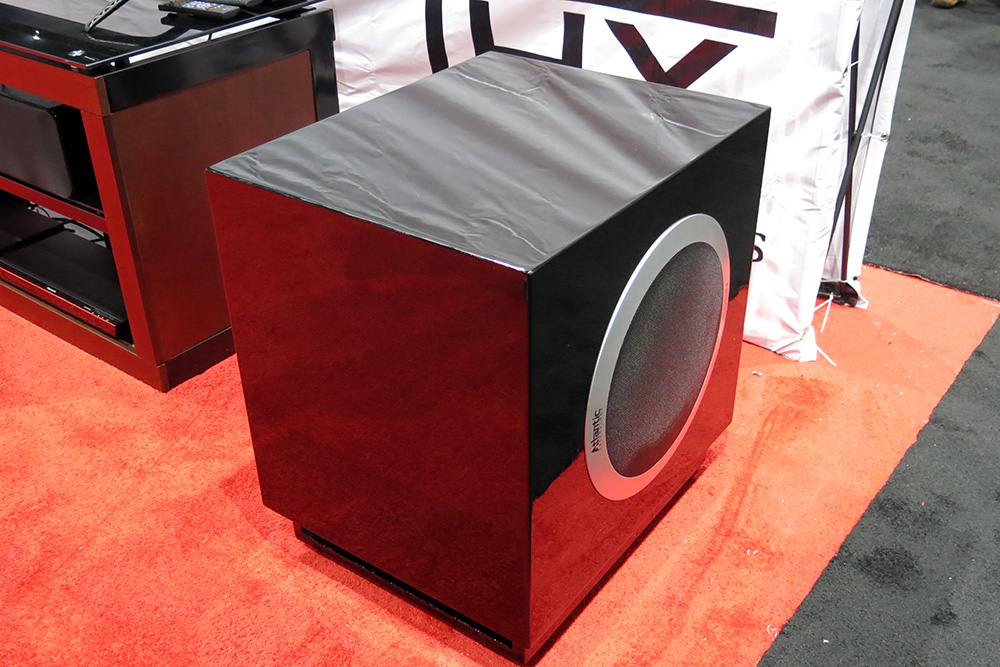 The SW1000 is Atlantic Technology’s new supersub, with a 1000W amp powering dual 12” woofers. It has XLR and RCA inputs, and a switch on the back that sets it to Maximum SPL or Maximum Extension mode. The SW1000 was designed to meet the THX Ultra spec with a single subwoofer, although it has not yet been submitted to THX for testing. Price is still undetermined. 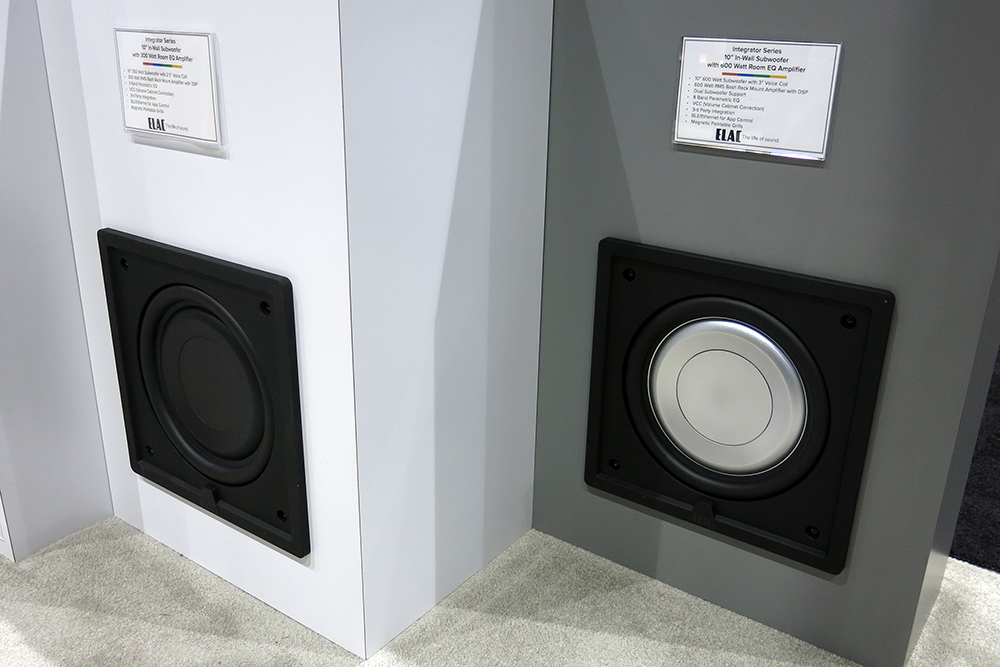 Elac’s Integrator-series products are almost certainly the most technologically sophisticated in-wall subwoofers ever. Prototypes were shown at last year’s Expo, but these models, which should start shipping around the end of the year, are substantially different. As with some of Elac’s other Andrew Jones-designed subwoofers, they use an auto EQ technology in which the listener uses a smartphone app to measure the sub’s response close up, then from the listening position, and then the app calculates an EQ curve that corrects for room acoustics. With the in-wall models, the sub’s amp does two close-up measurements: one normal and one with a resistor in place. It then uses these measurements to calculate the sub’s impedance, from which it can derive the volume of the wall cavity in which the sub is installed. Using this information, it can then calculate a more precise correction curve. There will be two models available, both with 10” drivers. The $999 model includes a 300W amp and a driver with a 2.5” voice coil, while the $1499 model includes a 600W amp and a driver with a 3” voice coil. The 600W amp can also power a second sub (a $400 option), although it applies a global EQ to both subs rather than EQing them individually. 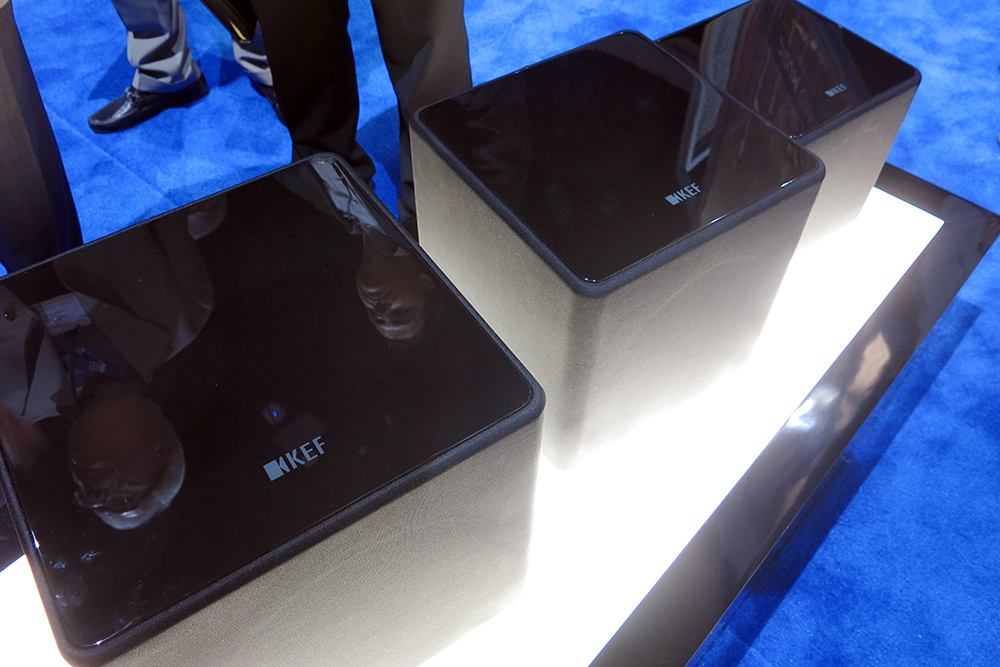 KEF’s Kube-series subwoofers include digital signal processing that lets the user achieve flat response whether the sub is positioned freestanding, in a corner, or in a cabinet. All have 300W amplifiers. The 12” Kube12 costs $699, while the 10” Kube10 costs $599 and the 8” Kube8 runs $499. 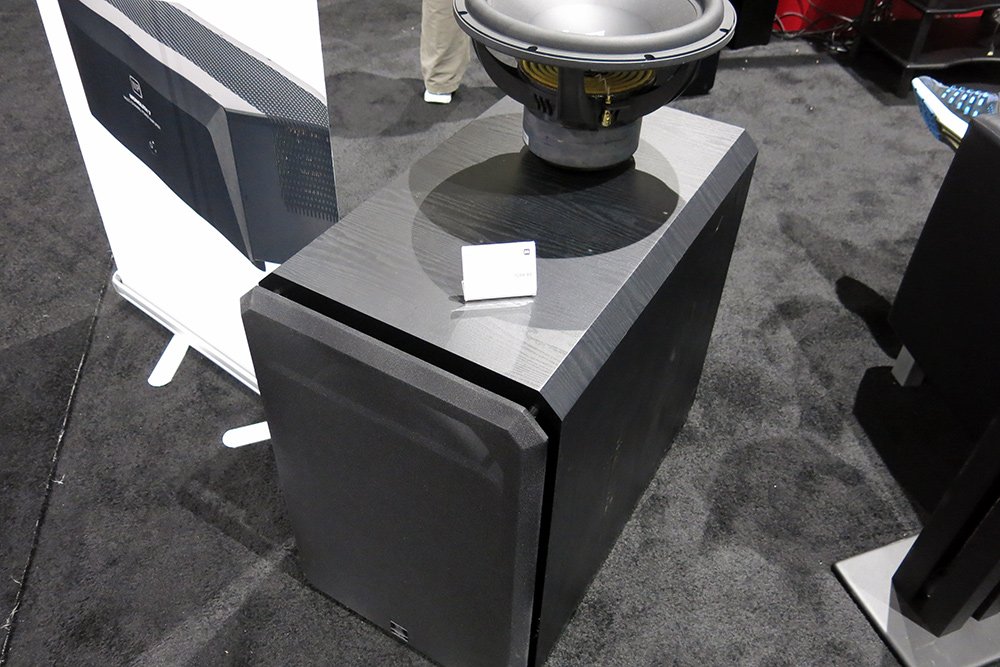 Low-price leader Monoprice launched three new subs at CEDIA, all of which will be submitted for THX certification. The model shown here is the $1299 model 24458, with a 15” driver and a 1000W amp. It’s designed to meet the THX Ultra specification. The company is also launching 10” and 12” models designed to meet the THX Select specification. The 10” model 24456 is priced at $499, and the 12” model 24457 is priced at $799. Both have 500W amps, and all three subs have EQ switches and foam plugs that allow them to be operated in sealed or ported mode. 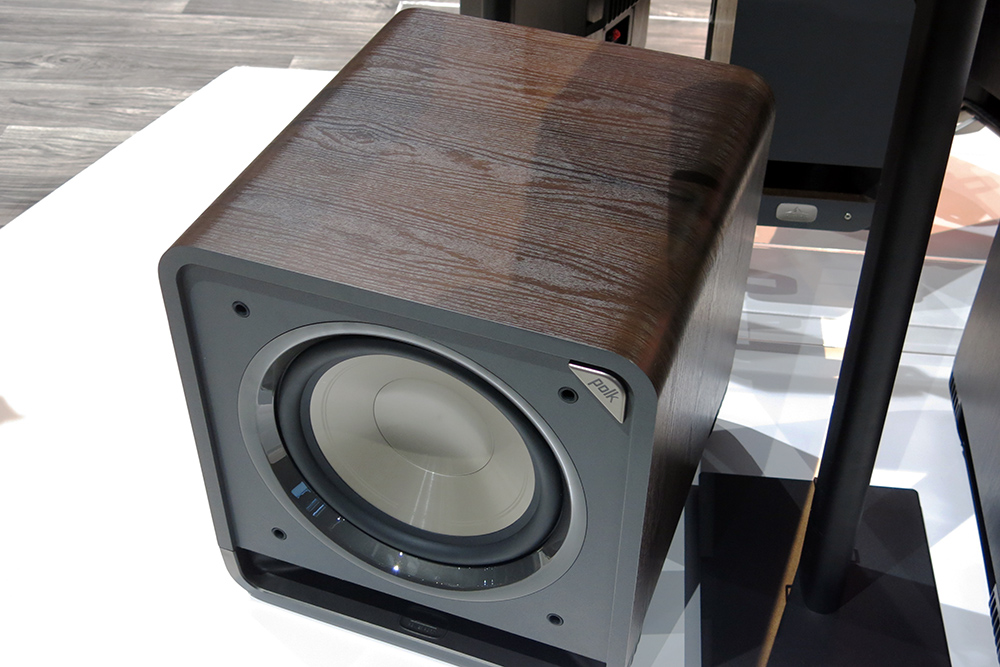 Polk Audio’s HTS-series subwoofers are the first to use the company’s PowerPort technology, which uses baffles shaped like Hershey’s Kisses to smooth the airflow in and out of the port and thus reduce port noise. The 12”, 400W HTS12 is priced at $449, and the 10”, 200W HTS-10 at $349. 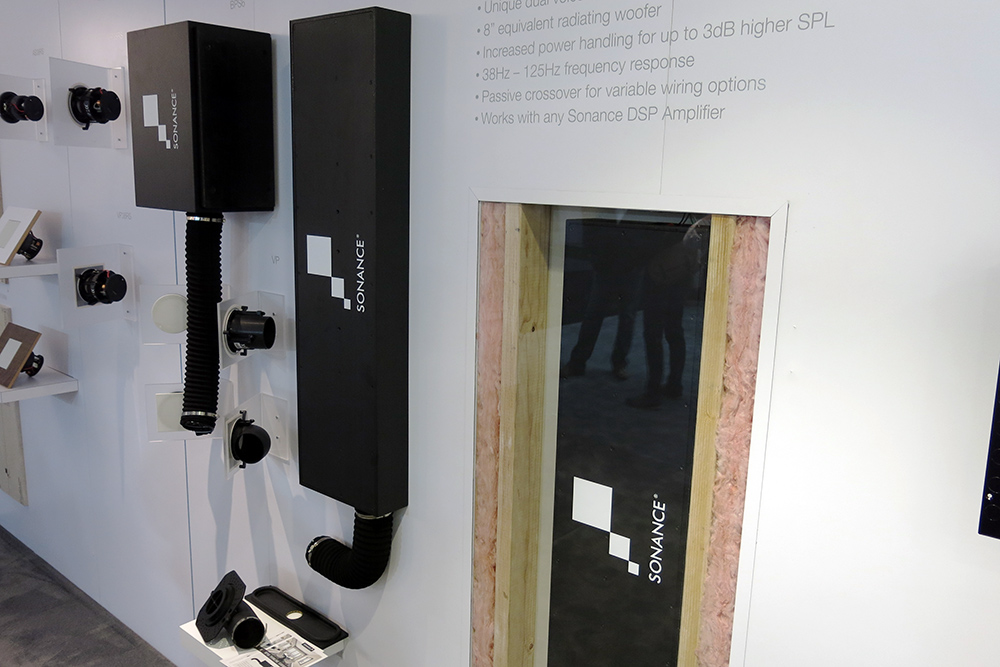 Fully enclosed subwoofers that hide in a ceiling and vent through a tube have been around for about a decade. Installers like them because only a small 3” or 4” port is visible, and with a grille installed it’s almost unnoticeable. Sonance’s $1100 BPS6 TL is the first such model I’ve seen that’s slim enough to slip into a wall cavity. It uses a special 13” x 3” driver said to have the equivalent radiating area of an 8” round woofer. The BPS6 can be powered by one of Sonance’s subwoofer amps, and has rated bass response down to 38Hz. 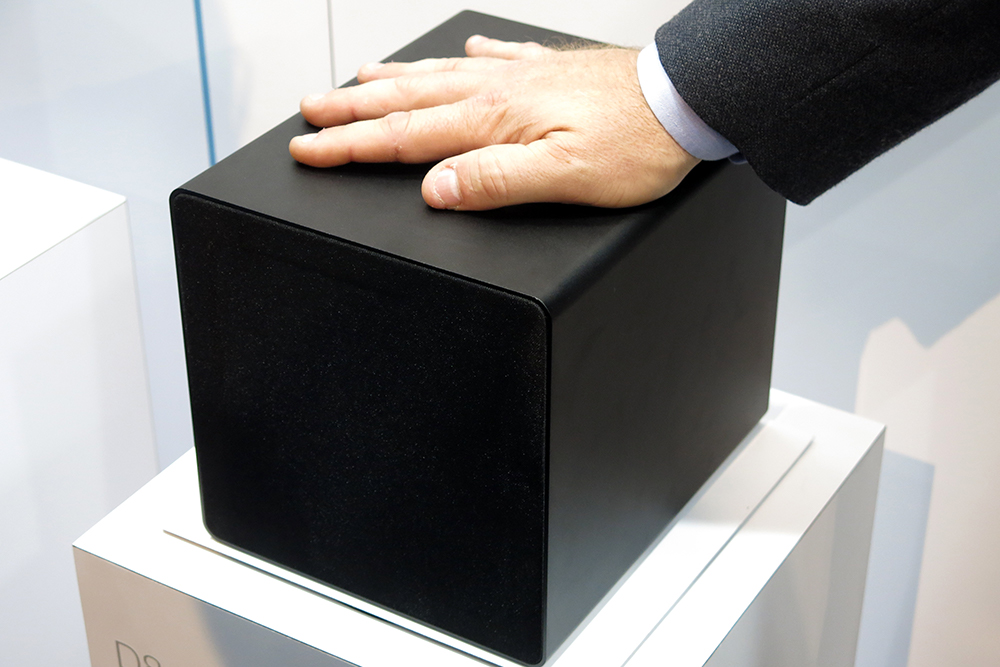 Sonance’s Impact D8 is a clear shot at making a slightly smaller, slightly better version of Artison’s RCC Nano One minisub. Both have 300W amps, but the Impact D8 has two 8” square drivers instead of the Nano One’s dual 6.5” round drivers, giving it almost twice as much radiating area. Sonance’s Sonarc app provides 16 bands of parametric equalization for fine-tuning the Impact D8’s performance. A wireless receiver is built in. Expect a price of $1000 to $1200, plus $100 for the optional wireless transmitter. 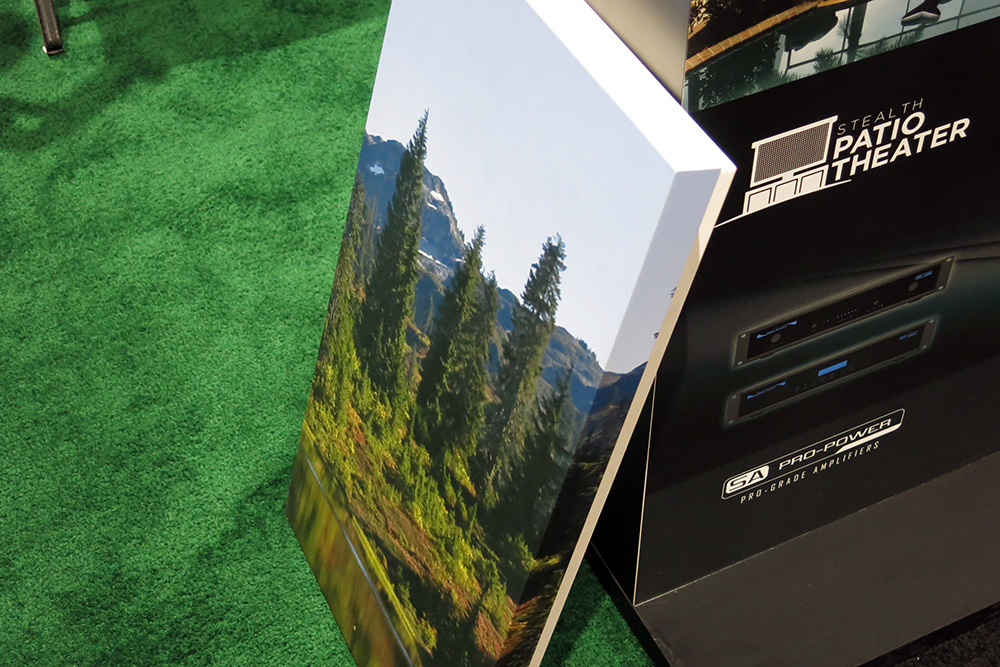 The Stealth Acoustics Image III sub is an on-wall subwoofer that’s only about 3” thick. The company can wrap the front of it with any digital graphic or photo of the customer’s choice. The face of the subwoofer serves as the radiating surface. Two motor structures -- each one similar to the magnet and voice coil from a conventional 8” woofer -- vibrate the panel. Frequency response is rated down to 35Hz, and the sub is priced at $700 each plus $150 for the wrap. Stealth Acoustics also offers two subwoofer amps that can be used with the Image III.