It used to be rare to find wireless speakers at the CEDIA Expo, which focuses on custom-installed audio/video systems and home automation. But the 2017 CEDIA Expo, which took place at the San Diego Convention Center, had quite a few new wireless speakers. This product category is growing so fast and capturing so much of the public’s attention that few audio manufacturers can afford to ignore it.

Here are some of the most interesting wireless speakers I saw at CEDIA. There’s one I wish I could include, but someone took it away for a demo before I could snap a picture: the $129 RBH Sidekick, a Bluetooth speaker that looks generic but was voiced by RBH VP of engineering Shane Rich, who’s done such a great job voicing the company’s headphones.

All prices in USD. 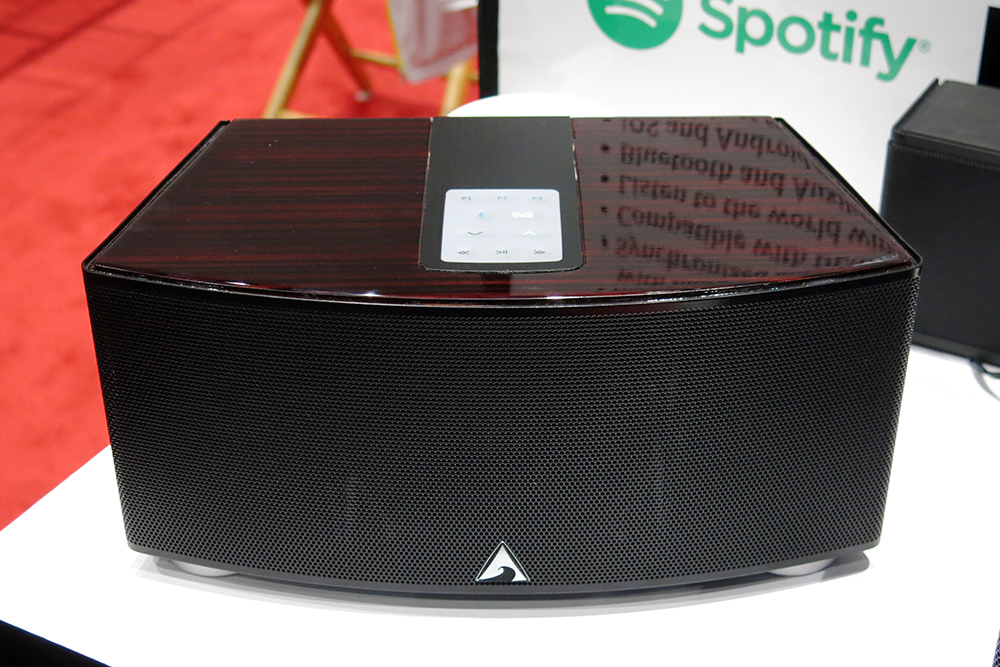 Atlantic Technology showed a prototype of its $499 Gatecrasher speaker at the 2016 CEDIA Expo. The company decided to make it technology-agnostic, with a 3.5mm input for the streaming device of your choice (presumably a Google Chromecast dongle or Amazon Echo Dot) and a USB output to power the device. The Gatecrasher gives priority to the first input, but if there’s nothing on it, it switches to the second input. So if your TV is plugged into the first input, and your streamer is on the second input, the system will switch automatically to the TV when it’s turned on, then back to the streamer when it’s turned off. It also has built-in Internet Radio capability. The best part is that it’s a real sound system inside, with a 4" woofer augmented by a 5" passive radiator, plus a two-way speaker (with a 2.5" midrange and 0.75" tweeter) for each stereo channel. 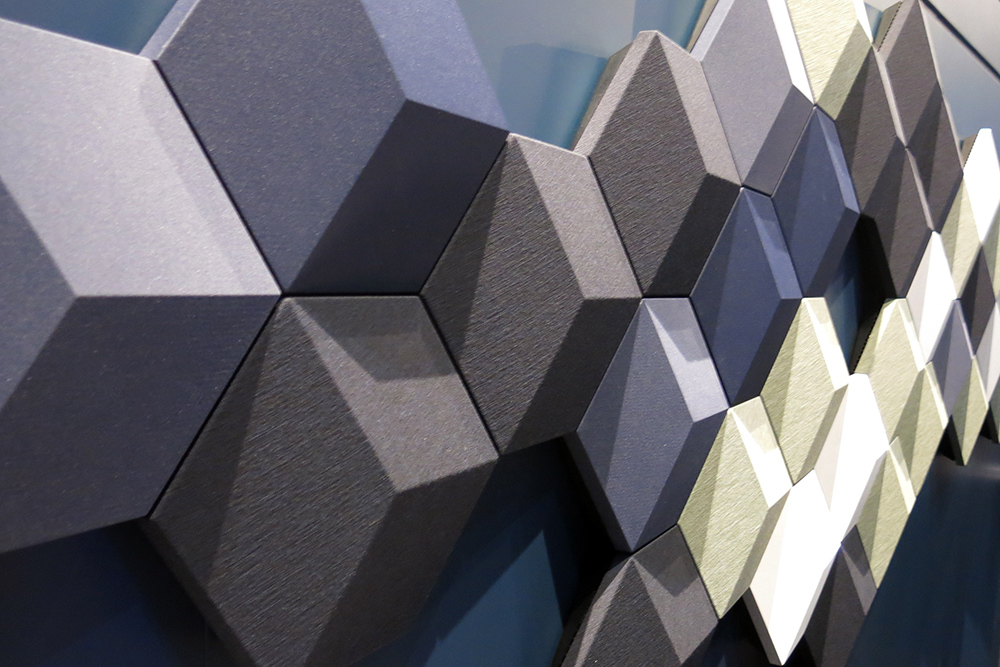 I doubt anyone would argue if you said Bang & Olufsen’s BeoSound Shape is the most beautiful and inventive wireless sound system ever. The system consists of tiles you can arrange as you like to form, in effect, sonic sculptures. Some of the 12.6" by 14.3" tiles incorporate speakers; some incorporate an amplifier; some incorporate the BeoSound Core wireless interface (which works with AirPlay, Chromecast, and Bluetooth); and some serve as acoustic dampers. The tiles come in ten different designer-friendly muted colors. The price of the modular system varies considerably depending on how many speakers and amps you include, but the speakers run $999 per pair, the amp runs $1499, and the Core costs $999. So a system with four speakers, one amp, and one streaming device costs about $4500. 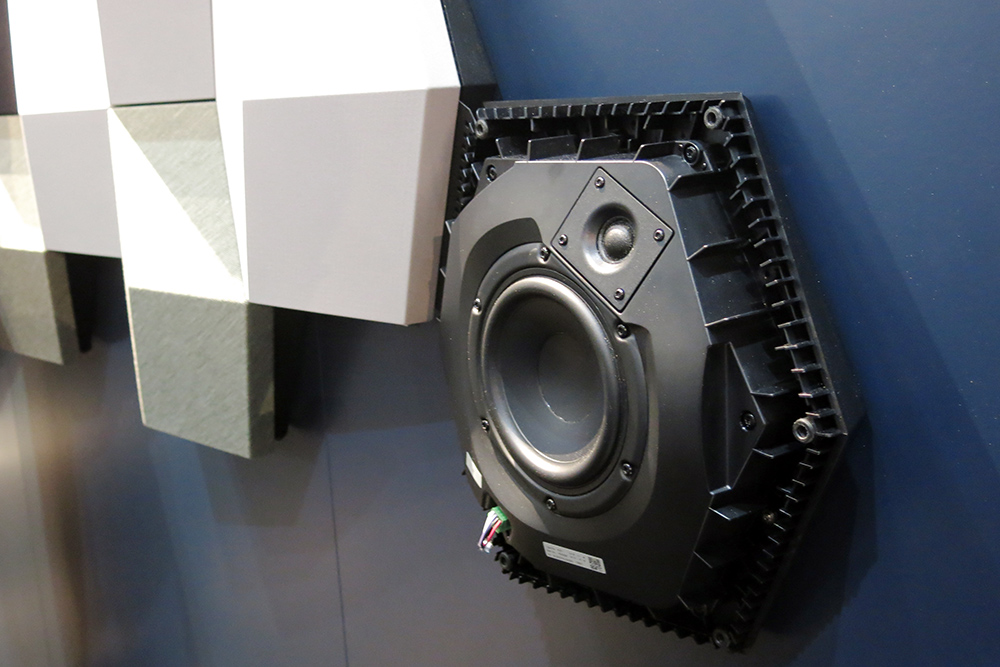 This close-up shows what’s inside each of the speakers in the BeoSound Shape system: a 5.25" woofer and a 0.75" tweeter. The speakers are passive, powered by the system’s 80Wpc eight-channel amplifier. As many as 44 speakers can be used in one system. 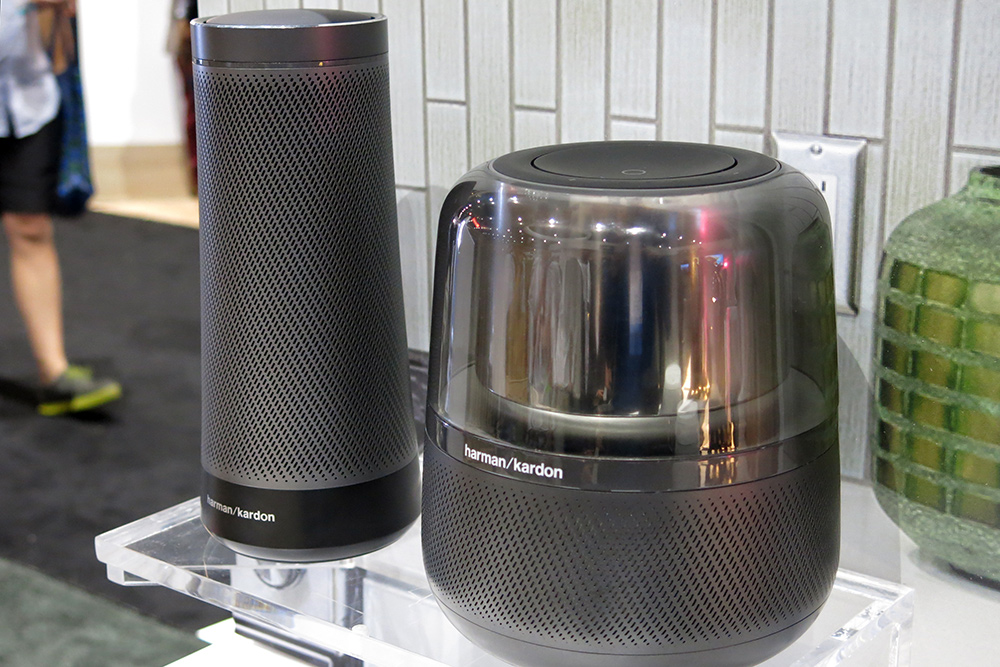 There’s a bit of a “format war” taking shape in the smartspeaker industry, with tech giants Amazon, Google, and Microsoft all offering their own artificial intelligence technology. With its new wireless speakers, Harman Kardon’s not playing favorites: the $199 Invoke at left uses Microsoft’s Cortana digital assistant, while the $249 Allure at right uses Amazon’s Alexa assistant. The former lets you make hands-free phone calls through Skype, while the latter incorporates an ambient lighting feature. 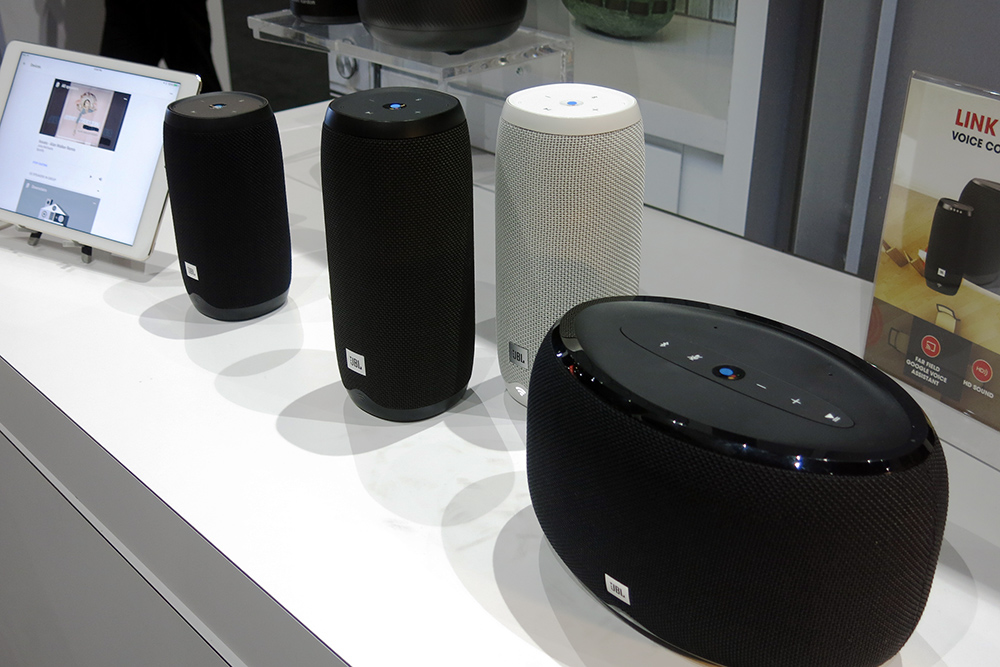 JBL’s Link family of wireless speakers have Google Assistant built in, so they work exactly like a Google Home smartspeaker but they sound better (which isn’t hard). Just say “OK, Google, play Oscar Peterson,” and in seconds you’re hearing jazz piano masterpieces. If your home is properly equipped, you can also say “OK, Google, turn on living room light” and other such commands. Left to right, the line comprises the $149 Link 10, the $199 Link 20 (available in black or white), and the $249 Link 300. The Link 10 and Link 20 are both portable, with rechargeable batteries and an IPX7 waterproof rating. For voice recognition, all the speakers use the same two-microphone array as the Google Home. 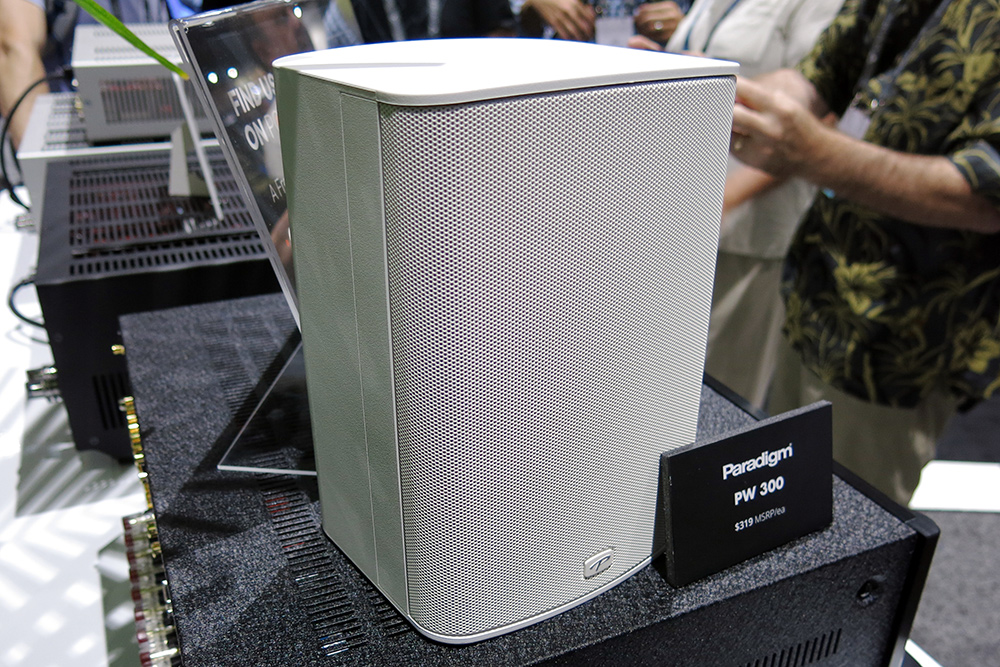 Consider Paradigm’s PW300 a Play-Fi pure play. Unlike Paradigm’s more expensive wireless speakers, the $319 PW300 has no line input. It’s designed primarily for use with Play-Fi, DTS’s multiroom wireless audio technology. But it does allow you to use one PW300 as the left speaker and the other as the right, creating a wireless stereo system -- or you can run both channels through the PW300 in mono. Bluetooth wireless is there as a backup if your network drops out. 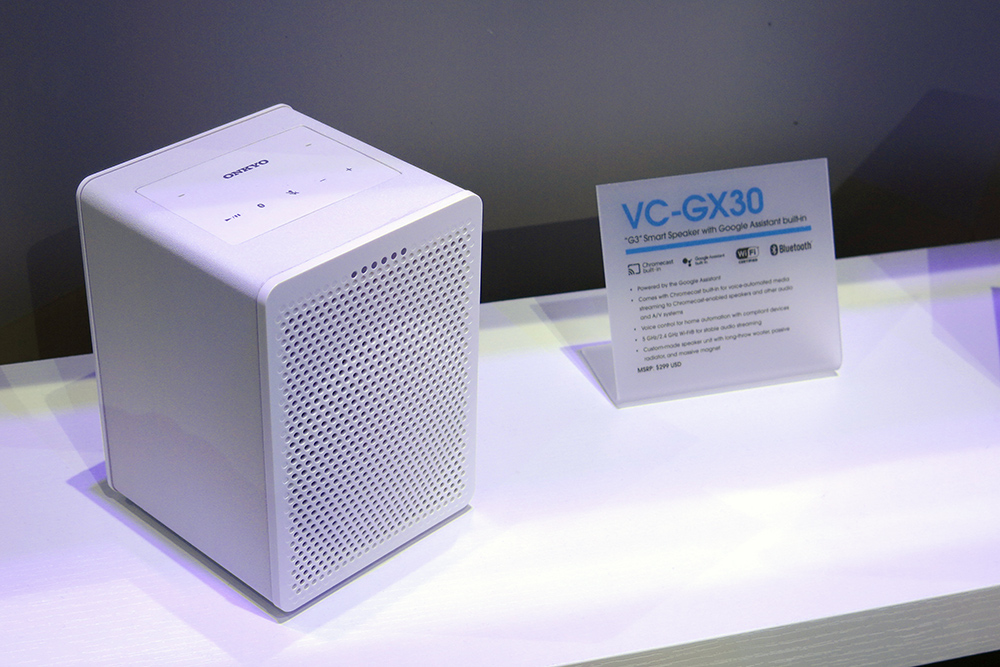 Onkyo’s $299 VC-GX30 is another speaker that seeks to deliver the functionality of a Google Home with better sound quality. Instead of the Home’s three tiny drivers, the VC-GX30 has a single larger driver plus a passive radiator to kick up the bass response. It also has Bluetooth wireless as a backup. Onkyo also showed the $279 VC-FLX1, which incorporates Amazon’s Alexa artificial intelligence system and adds an Internet-connected 1080p camera. 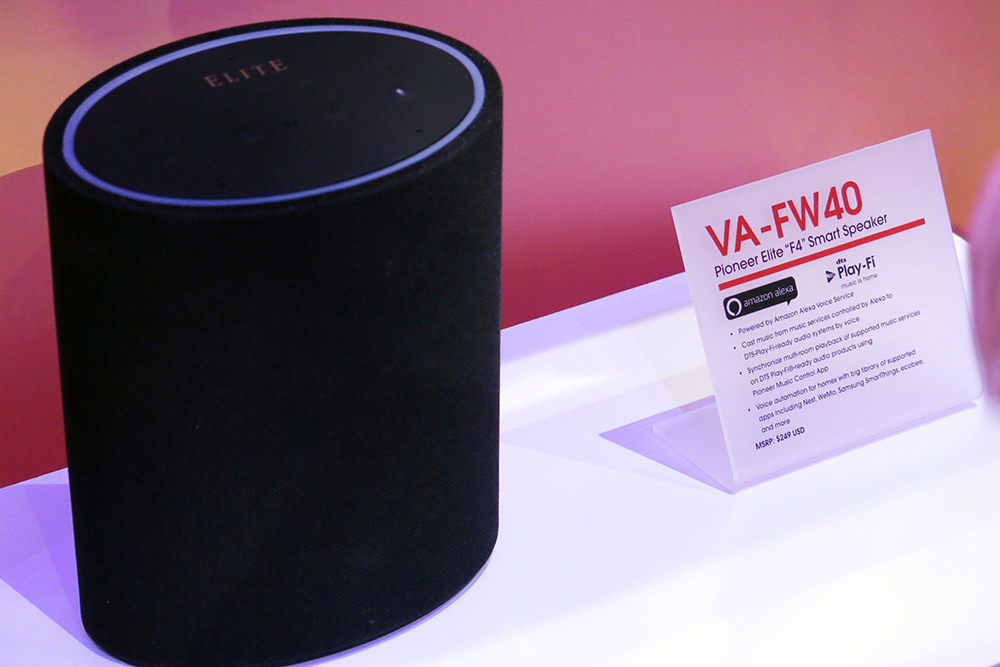 Pioneer’s $249 VA-FW40 is built to deliver the convenience of Amazon Alexa with much better sound quality. It has a typical driver complement for a speaker in its price range: two fairly large full-range drivers plus a passive radiator. It also features DTS Play-Fi for multiroom operation, and four top-mounted preset buttons that let you access your favorite Pandora station, Internet Radio station, etc., without using the voice command.