While the 2017 CEDIA Expo, which took place last week at the San Diego Convention Center, showed quite a few conventional speakers, the focus was on so-called “architectural” speakers, which for the most part means in-wall and in-ceiling models. Fortunately, many of the most revered brands in audio have gotten into this market, so the 2017 Expo witnessed some highly inventive new architectural models that look like they might be competitive with some of the best freestanding speakers.

I bet there were close to 100 brands of architectural speakers at the show, and no one could cover them all in three days. So here are the ones I found most interesting. All prices in USD. 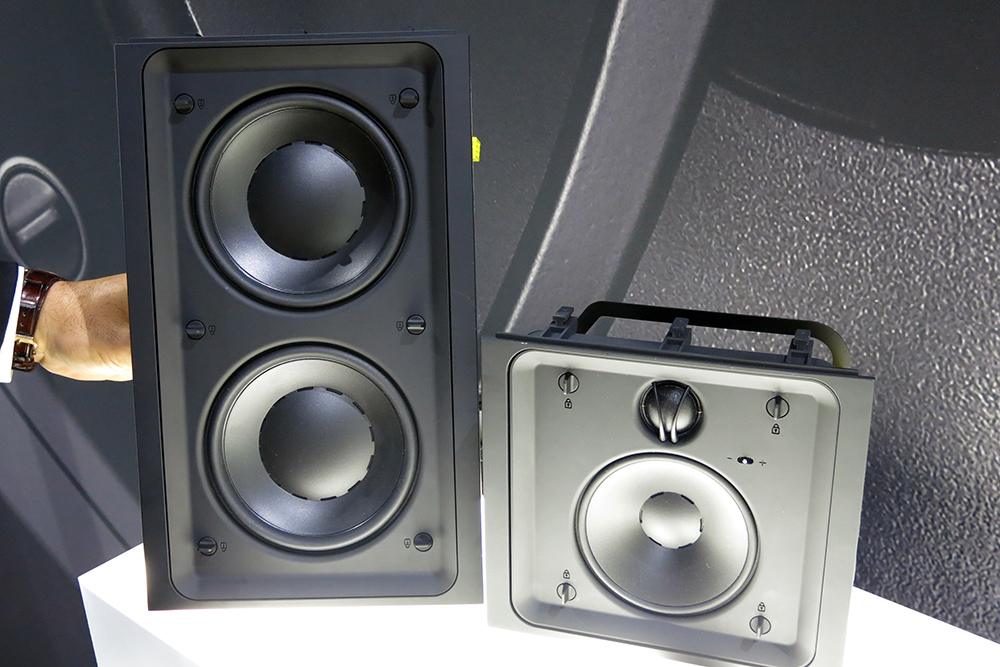 Mounting long in-wall speakers around a TV screen is often a challenge, because the studs behind the wall are sometimes placed right where you want to put the speaker. Dynaudio’s modular in-wall LCR speaker, the S4-LCR65, can solve this problem. The $999-each midrange-tweeter module is compact enough that it can fit into fairly confined spaces. Its $699-each, dual-woofer bass modules can be placed directly next to the mid-tweet module or just nearby, leaving space for wall studs. The crossovers can be bypassed, allowing the use of active crossovers to create a tri-amped system. 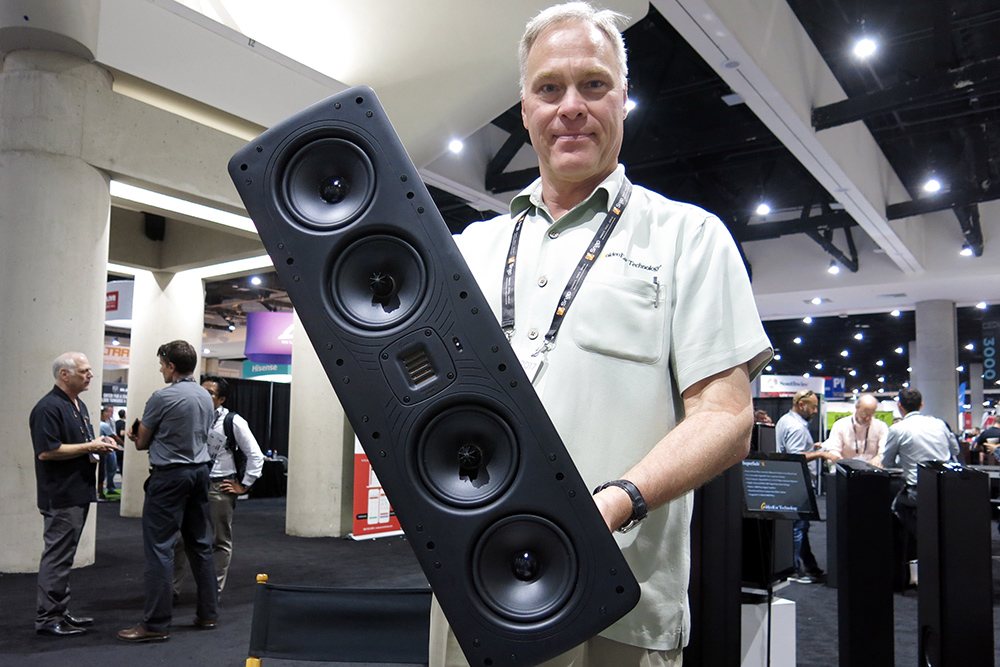 GoldenEar Technology demoed its new Invisa Signature Point Source LCR, which is intended to capture the sound of the company’s popular Triton-series tower speaker in an in-wall design. The $999-each speaker is a 2.5-way design. The 5.25" woofers on the ends operate only up to 500Hz. The two middle 5.25" drivers are midrange-woofers, which reproduce bass and midrange. In the center is the company’s High Velocity Folded Ribbon (HVFR) tweeter, which is similar to the AMT tweeters found on a variety of other speaker brands. An optional back box adds $149 to the price. 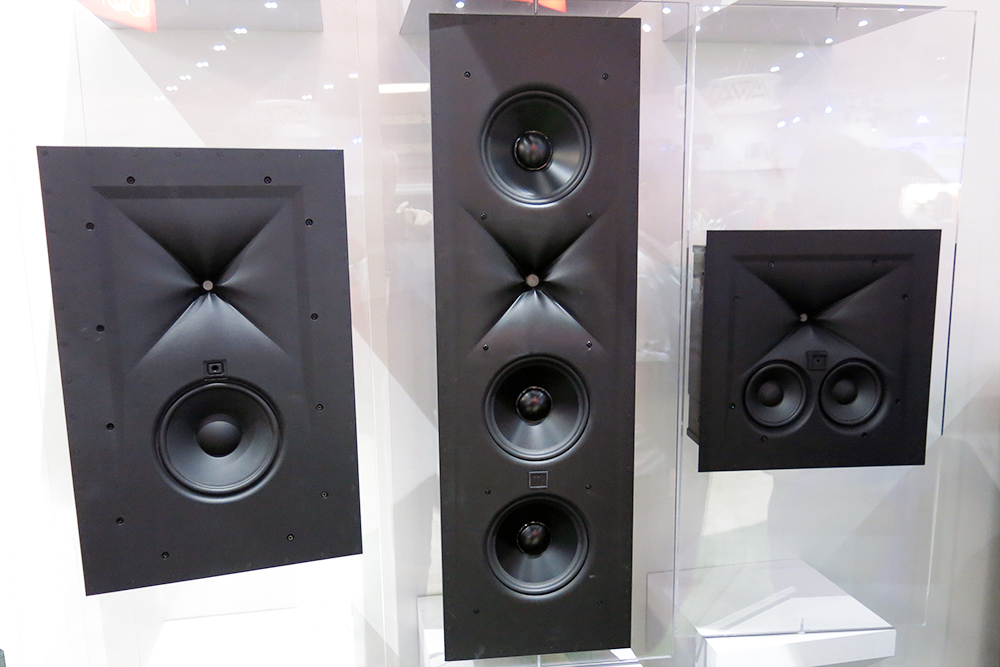 JBL’s $6000-each Synthesis SCL-2 (center model in the photo) looks to be one of the most capable in-walls ever created. The waveguide for the compression driver borrows its geometry from the company’s flagship M2 speaker. Unlike the smaller SCL-4 on the left or SCL-3 on the right, the SCL-2 tweeter has dual 1.5" compression drivers firing face-to-face into a single waveguide, so it should deliver some of the highest tweeter output of any speaker ever shown in the history of the CEDIA Expo. The tweeter is combined with three 8" woofers in a chassis measuring 6" deep; because standard walls are 3.5" deep, the SCL-2 requires a double-depth wall. 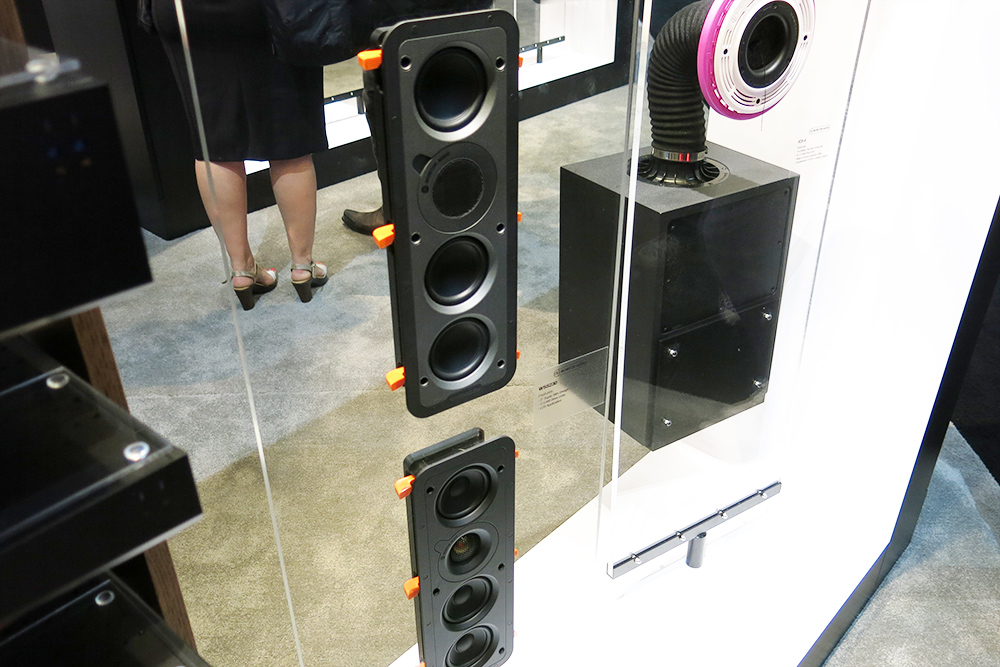 Monitor Audio had a whole lot of architectural action at the 2017 Expo. The two long, slim models shown in the center of the picture are the $650-each WSS430 and the $420-each WSS230. WSS stands for “wall super slim.” Like Monitor’s CSS, or “ceiling super slim,” models, the WSS models are just 2" deep, so they can fit in thin walls of apartments and condos. The WSS430 has three, 3" C-CAM dishless composite woofers plus Monitor’s MPD (“micro-pleated diaphragm”) tweeter, said to have better high-frequency response than the familiar AMT tweeter. The WSS230 has a conventional 1" tweeter and 3" woofers. To their right is the $1100 ICS8 subwoofer, which mounts in a wall, ceiling, or cabinet. The “mouth” of the ICS8 terminates in a bracket that’s intended to be “mudded” into drywall, so all you see is a small, slim square or round grille that’s flush with the drywall. Monitor’s new $400-each CF230 in-wall/in-ceiling speaker (not shown) uses the same bracket. 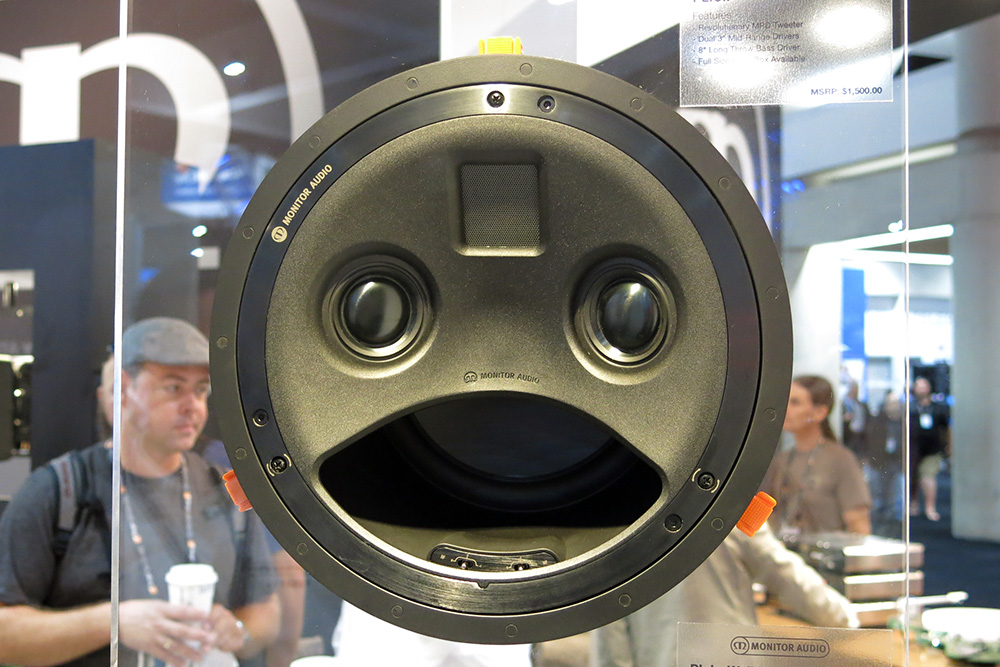 “That’s the way you’re going to look when you hear it!” a Monitor Audio rep said, referring to the “smiley face” design of the PLICII, the company’s new Platinum-series in-ceiling speaker. The speaker mounts an 8" woofer behind dual 2" midrange drivers and a single MPD tweeter of the type described in the previous blurb. Level switches for the midranges and tweeter are provided, and a 24-liter back box is optional but “highly recommended.” Although the display says $1500 each, the price of the PLICII actually hasn’t been set yet. 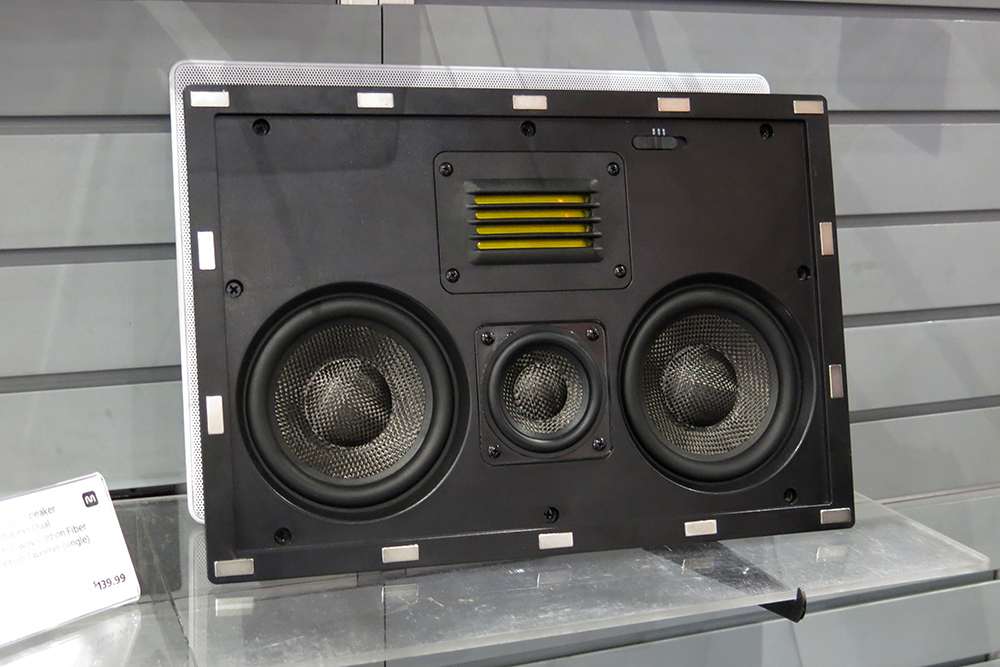 Not surprisingly, Monoprice’s new Amber series in-wall models undercut the price of most in-walls at the 2017 CEDIA Expo by hundreds of dollars. At $139 each, the 23341 Amber LCR is the most expensive model in the line; prices run as low as $119 per pair. The 23341 has dual 5.25" woofers, a 3" midrange, and a 2.5" by 1.25" flat-ribbon tweeter -- an unusual find in an in-wall speaker, as most manufacturers who might have used flat ribbons before have now switched to folded-ribbon designs such as AMT. The other Amber-series in-walls also use the flat-ribbon tweeters, while the two Amber in-ceiling speakers use AMT tweeters. 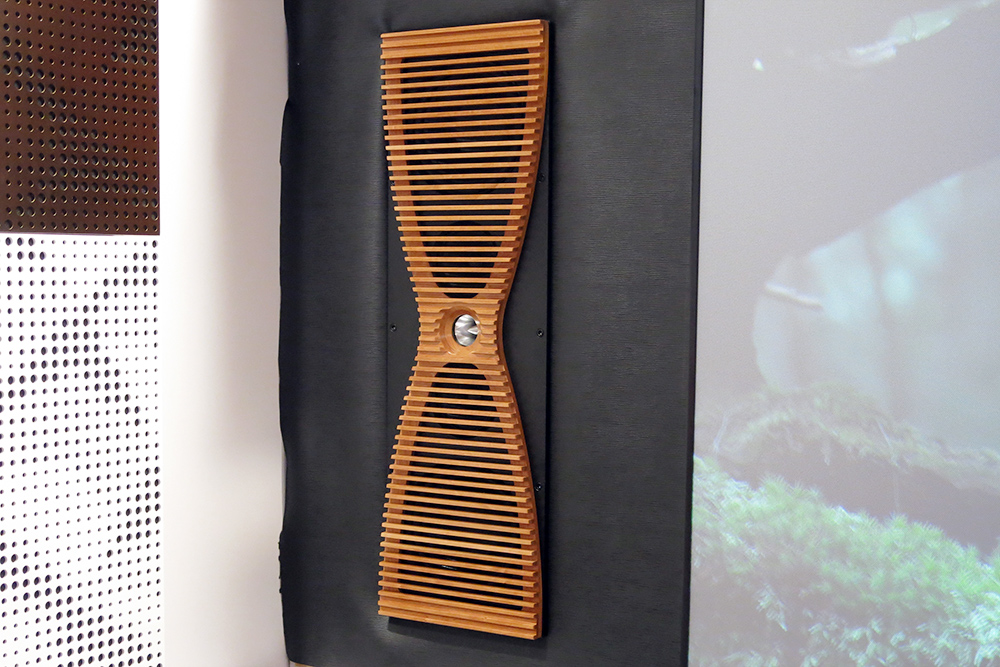 Most in-walls are built to be inconspicuous, but Origin Acoustics’ new Marquee Cinema Collection is designed to catch attention visually and sonically. The Marquee Cinema LCR speakers incorporate, as company spokesman Dave Donald put it, “big drivers and big sound.” Each of the $5000 speakers has two 8" woofers, two 5.25" midranges, and a titanium compression-horn tweeter, all mounted in an extruded-aluminum enclosure. The speaker includes no passive crossover filters; all the crossovers are accomplished through digital signal processing. The included DSP-equipped amplifier has three 700W channels: one for the woofers, one for the mids, and one for the tweeter. 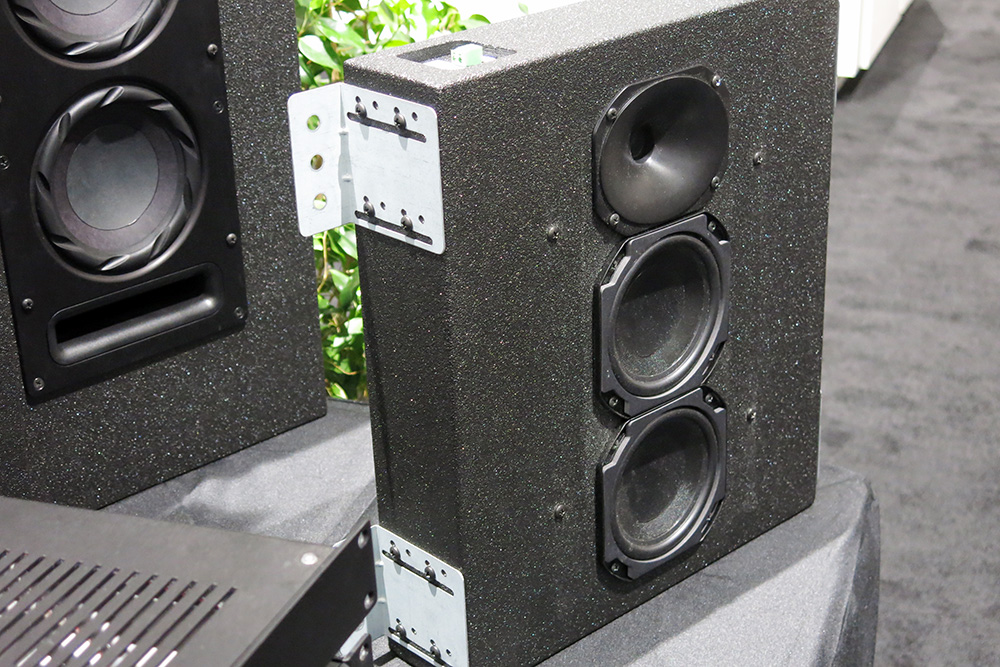 At least two other journalists joined me in my opinion that Pro Audio Technology’s diminutive SCRS-25iM in-wall speaker delivered the best demo of the 2017 CEDIA Expo. The speakers were hidden behind an acoustically transparent screen, and a company rep pointed out that the system was calibrated to deliver full Dolby reference level (105dB maximum sound pressure per channel), even in the back seats. The sound was so powerful, yet so clean, that I assumed we were listening to much larger speakers, and everyone in the demo I attended was shocked when the speakers were revealed to be tiny models with dual 4" woofers and a single tweeter mounted in a waveguide. The speakers will be priced around $1000 each, making this system much less expensive than the comparatively gigantic speakers Pro Audio Technology has focused on previously. 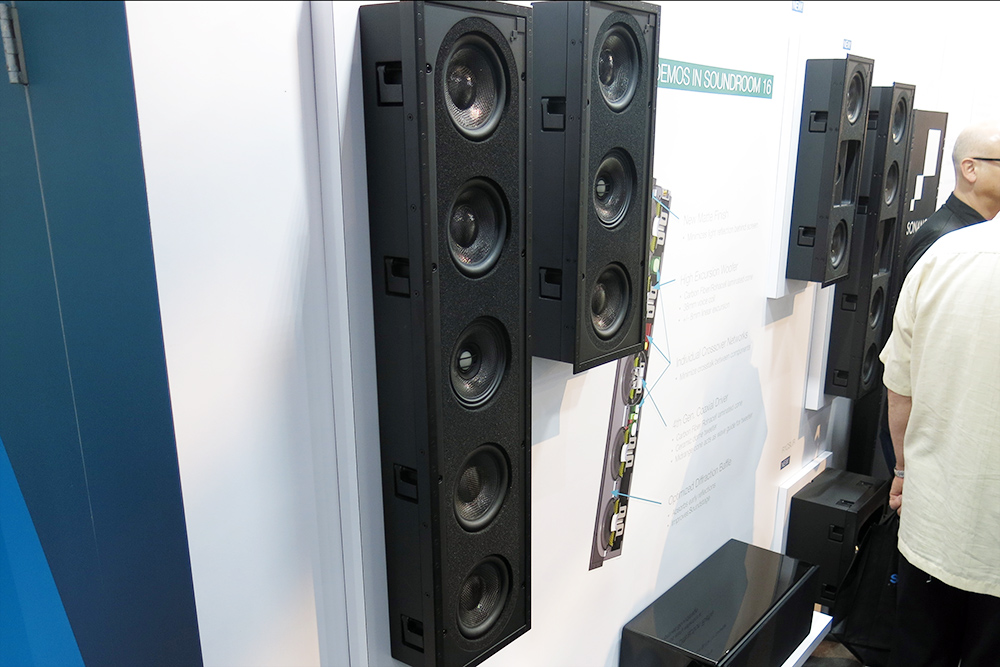 Sonance’s new Reference-series in-walls feature a new woofer design that blends carbon fiber with Rohacell, a stiff, lightweight composite material. Most of the speakers are three-way models incorporating a new concentric midrange-tweeter driver design, and all include integral back boxes. Shown in the center are the $2500-each R1 (left) and $1250-each R2, both LCR models intended for home theater or stereo. The line also includes two in-wall surround speakers, and in-ceiling LCR and surround models. 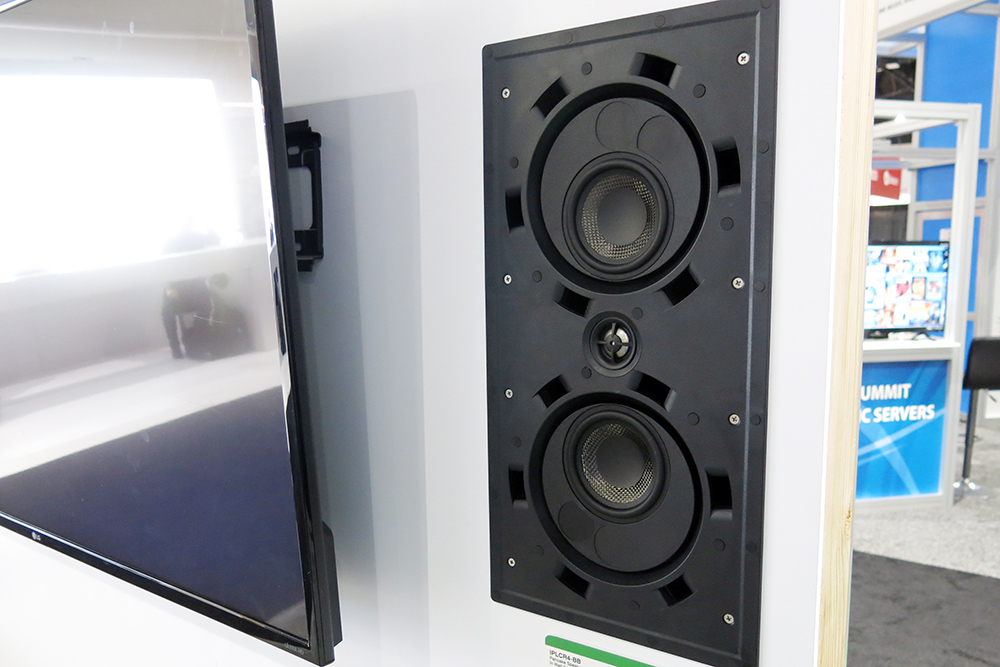 Vanco recently purchased in-wall/in-ceiling specialist company Beale Street Audio, and revamped all of the company’s speakers with carbon-fiber woofers said to deliver better sound. Beale Street Audio’s trademark is its Sonic Vortex enclosures, which provide six ports that the speaker can vent through -- and according to the company, bass response is similar to that of a much larger speaker. Another big advantage of this design is that it’s fully sealed in the back, so the performance isn’t dependent on the size of the space behind the speaker, as it is with most in-walls. The IPLCR4-BB shown here is an LCR-type speaker with dual 4" woofers and a 1" tweeter in what the manufacturer calls a “pancake” design, which is only 3" deep and can thus fit into slimmer-than-standard walls. Price for the revised model hasn’t been set yet; the previous model was $329 each.