The focus at the CEDIA Expo, the 2017 edition of which took place at the San Diego Convention Center, is more on custom-installed audio systems than traditional audio, which means we always see a lot more new in-wall and in-ceiling models than freestanding speakers. But there were a few new interesting freestanding models at the 2017 Expo. Here are the most interesting ones I found, with all prices in USD. 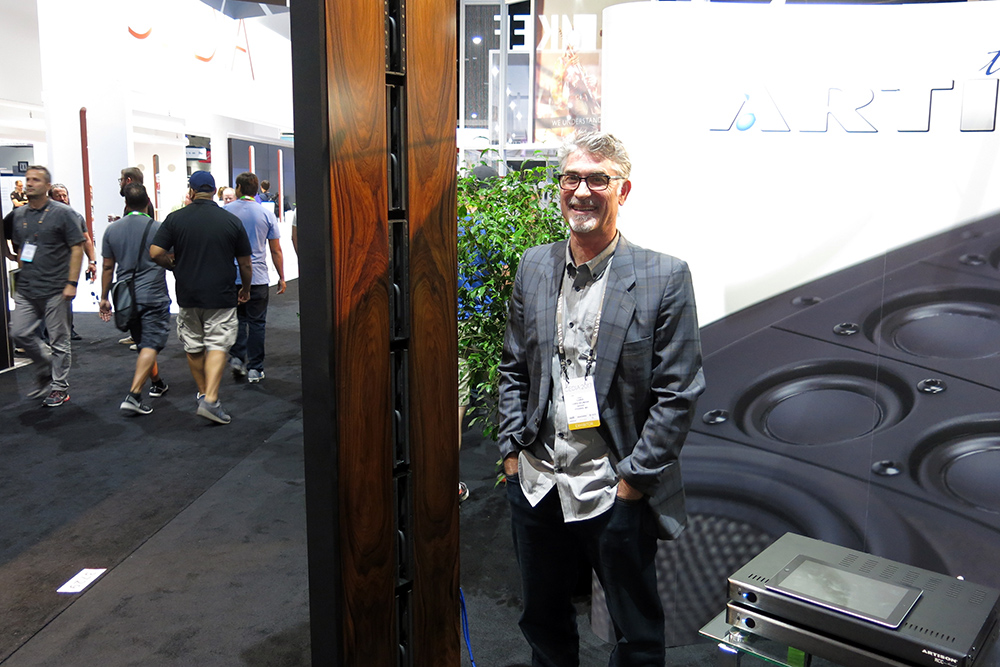 Artison, best known for speakers that attach to TVs, was recently purchased by home automation systems company Savant, so I expected the new Artison offerings to be dominated by custom-installation-friendly in-wall and on-wall designs. What I found was exactly the opposite: a high-end tower speaker system. Each of the new Artison Reference Technology towers incorporates the guts of six of the company’s RCC 320 in-wall subs, which means 24, 4" by 6" woofers firing into a single slot that runs from the top of the speaker to the bottom. This bass section is powered by an Artison RCC1000-SA subwoofer amp (one per channel). Artison founder Cary Christie wouldn’t reveal precisely what’s behind the front grilles except to say that it’s a “42-element line array” and that it doesn’t use ribbon drivers. Expect a price of $50,000 per pair. 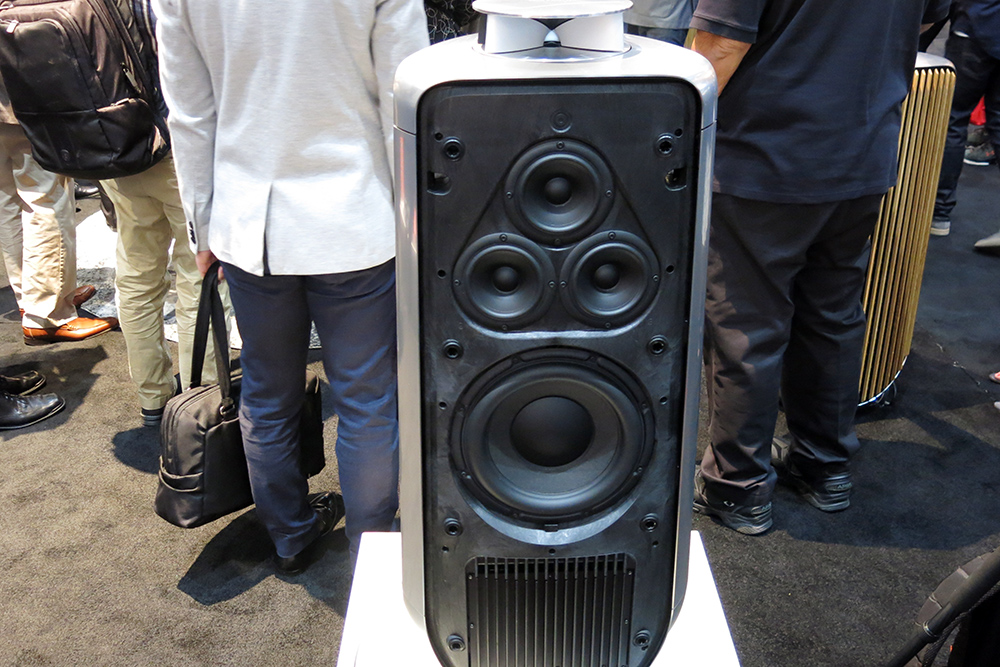 Consider Bang & Olufsen’s BeoLab 50 a “trickle down” from the company’s eccentrically designed BeoLab 90. The polished-aluminum speaker has a 10" woofer on each of its three sides. On the front are three 4" midranges. A 0.75" tweeter fires upward into an “acoustic lens” that disperses its sound evenly 180 degrees across a room; the lens rises up from the top of the speaker when the system is turned on. The lens’s effect can also be narrowed to create a more focused stereo sweet spot. Each speaker packs 2100W of internal amplification. The front uses a traditional fabric grille, while the other two sides are covered in slats made from oak. An auto room EQ feature is also built in. Price is $39,710 per pair. 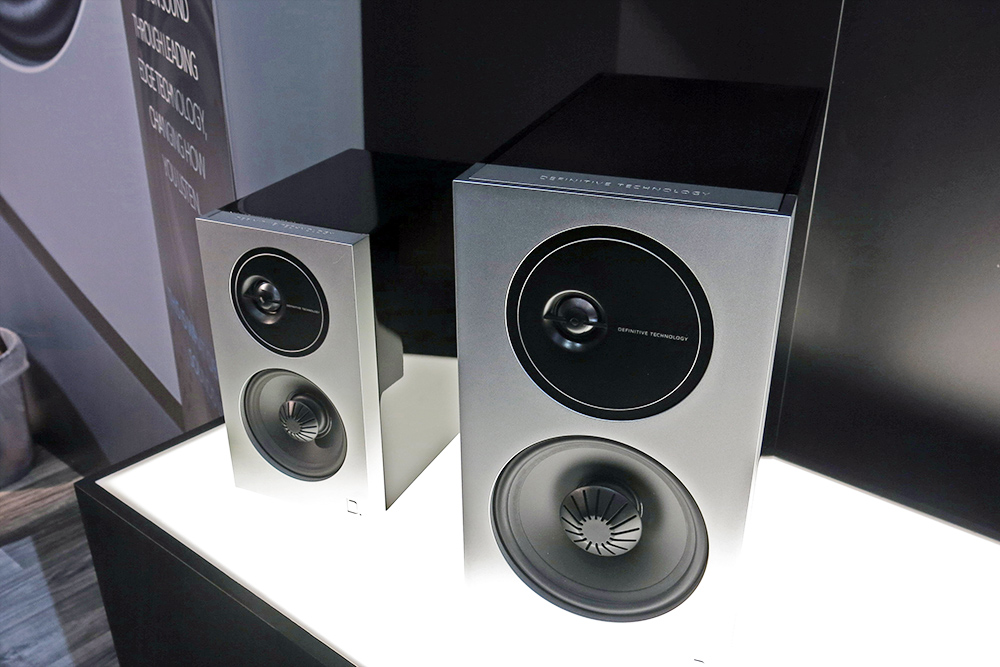 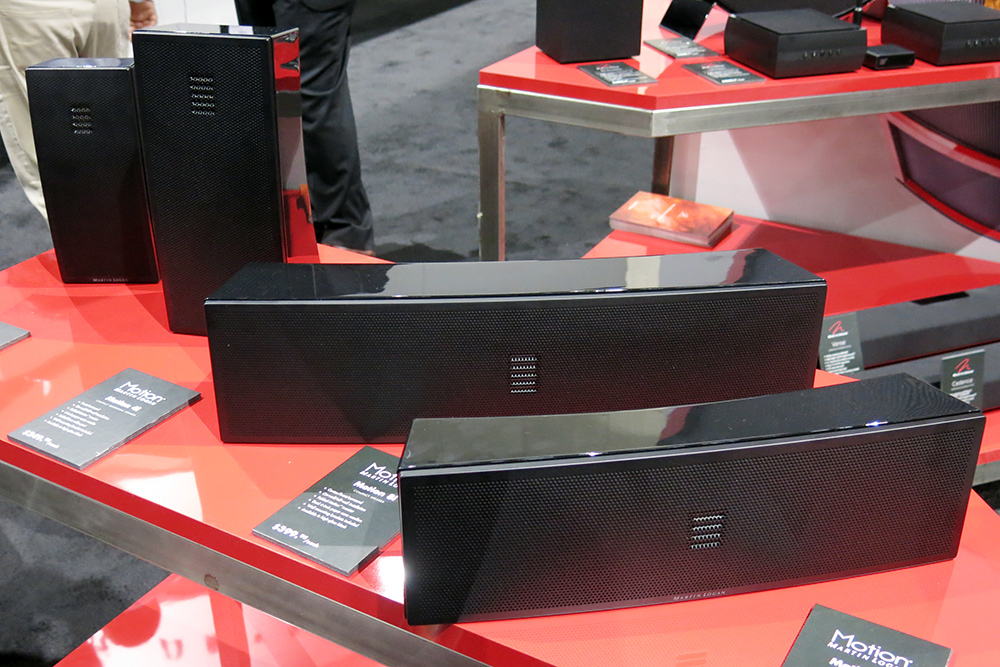 “Revamp” might be too strong a word for what MartinLogan has done with its entry-level Motion-series speaker line; “refresh” might be more accurate. The grilles are now removable, and the speakers (which in my experience sounded and measured great for their prices) have been subtly retuned. The line’s most distinguishing characteristic -- the Folded Motion tweeter, which is essentially an AMT type -- remains on all models. Prices are either the same or $20 less, depending on model; they run from $179 each for the Motion 2i bookshelf speaker to $399 each for the Motion 8i center speaker. 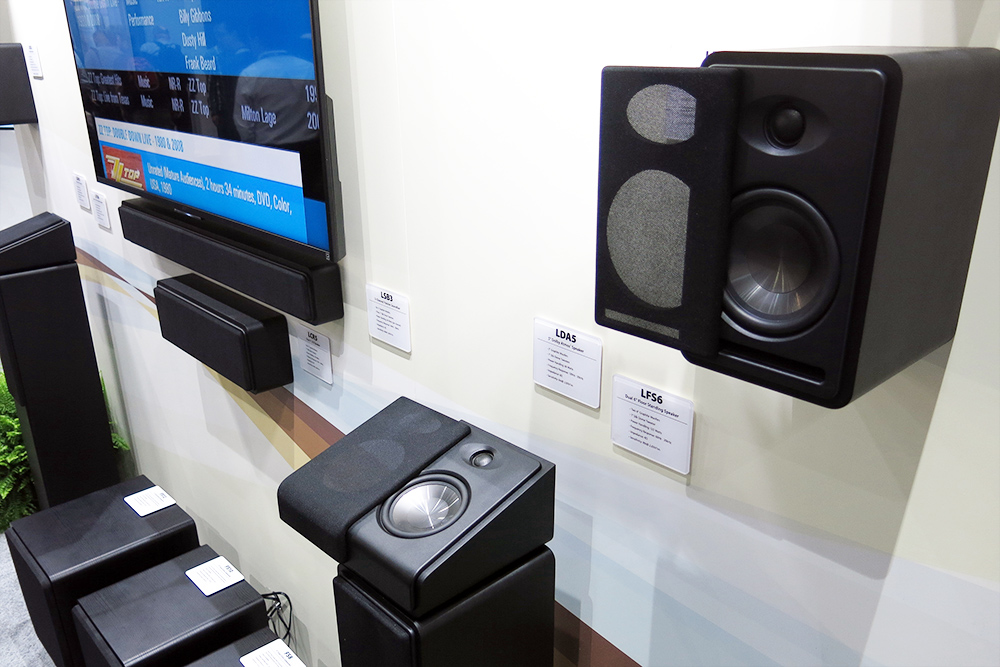 The Cabinet-series speakers represent the first comprehensive line of freestanding speakers from Proficient Audio, a brand best known for in-wall and in-ceiling speakers. All the speakers feature graphite-composite cone woofers and silk-dome tweeters, and the sleek, elemental look has a sort of retro-Eurostyle feel. The line includes a tower speaker, two bookshelf speakers, an LCR speaker, an Atmos-enabled height speaker (which is designed to sit atop the tower or the larger of the two bookshelf speakers), and a three-channel passive soundbar. Prices are quite reasonable, topping out at a suggested retail of $750 per pair for the LFS6 tower speaker plus another $250 if you want to add a pair of the LDA5 Atmos-enabled speakers. 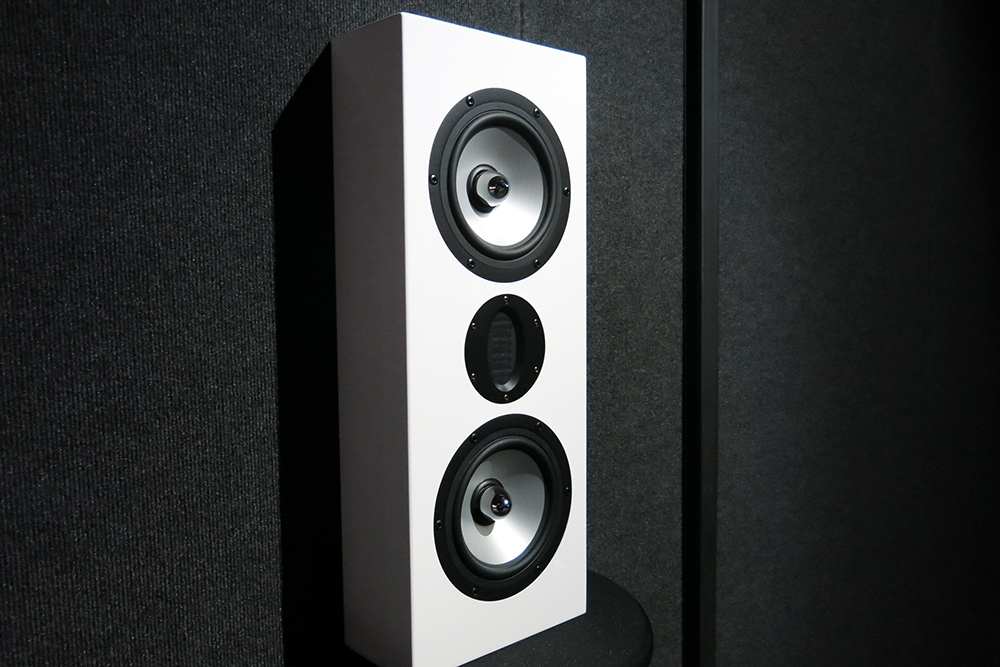 RBH Sound’s SV661WR Reference is something a little unusual: an on-wall speaker built for top-quality sound. Each one features two 6.5" midrange-woofers and a single AMT tweeter. A standard (non-Reference) SV661WR with a dome tweeter will also be available. The Reference version will cost about $1300 each, while the non-Reference version will cost around $800 each, and both are available in white or black. 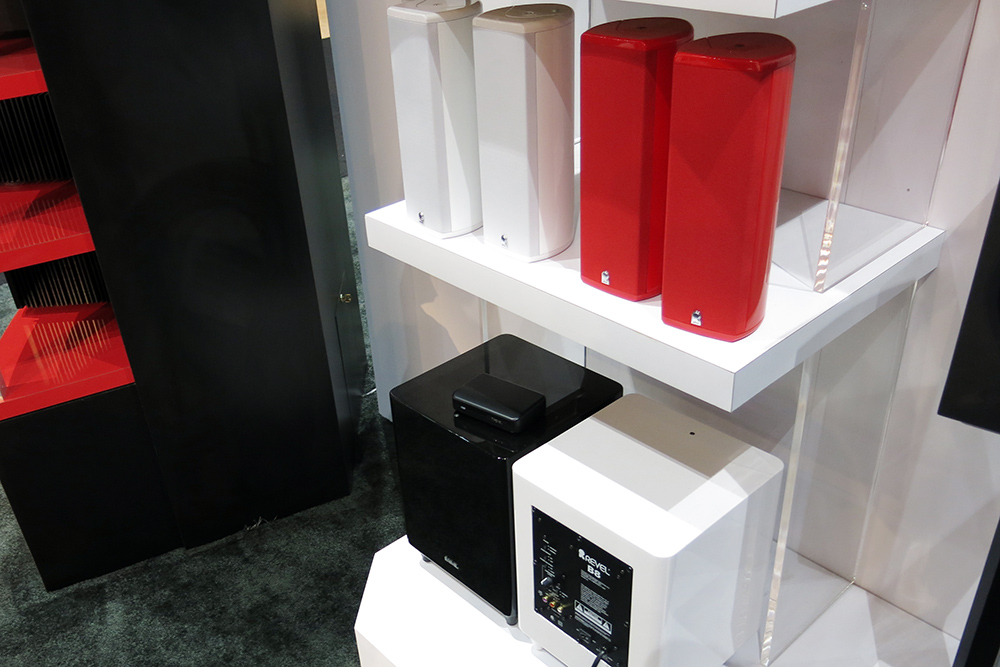 Revel is known mostly for high-end tower speakers, so the company’s new subwoofer/satellite systems should bring the brand to a whole different audience. The M8 satellites are available in a two-pack for $600 or a home-theater five-pack (with horizontal center speaker) for $1500. Each one has two 3.5" midrange-woofers and a 1" tweeter. The $499 B8 subwoofer shown at bottom incorporates an 8" woofer and a 200W amp, and includes a wireless transmitter. 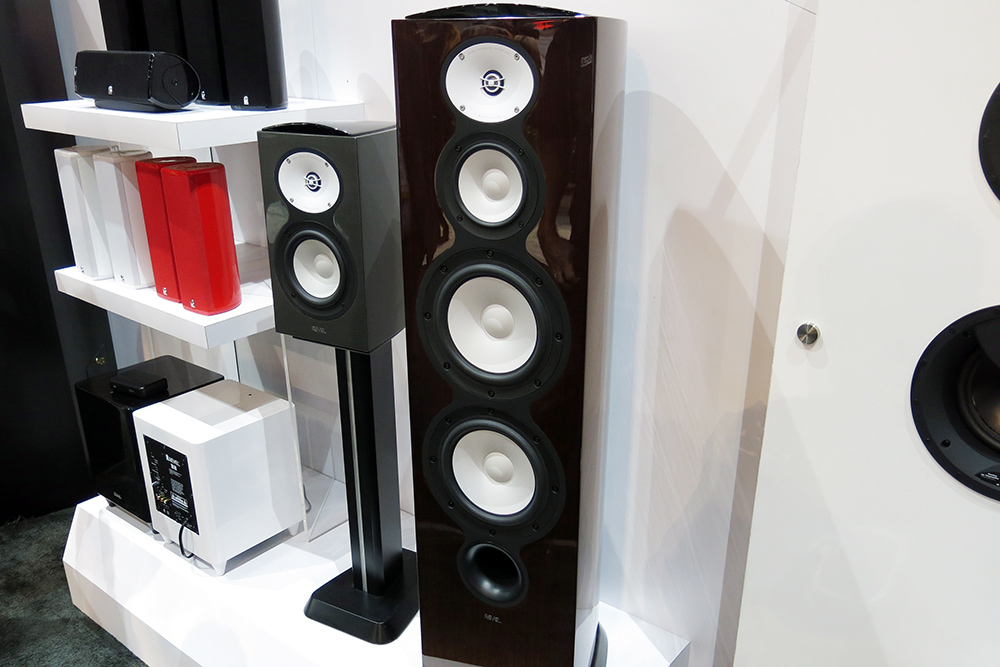 Revel seems to finally be close to finishing the new upscale versions of its Performa3 line that it debuted in January at CES. (The basic Performa3 line launched in 2013.) The new models are the $4000/pair M126 Be bookshelf speaker and the $10,000/pair F228 Be tower speaker. The biggest difference with the upscale models is that they use a beryllium-dome tweeter in a ceramic waveguide, instead of the aluminum tweeter and plastic waveguide on the original models. There’s also a new midrange driver and a somewhat revised woofer cone, plus a gloss-finish top cap. The new models are expected to ship in Q1 2018, and the company expects to extend the line with more models, such as a center speaker.