Why is the CEDIA Expo one of the most important venues for launching new subwoofers? Because most of the audiophiles who attend consumer hi-fi shows aren’t all that interested in subs, and because specialty audio products have all but disappeared from the January CES show in Las Vegas.

At the 2018 CEDIA Expo, which was held in San Diego, I saw lots of new subwoofers. Here are my favorites, with all prices in USD. 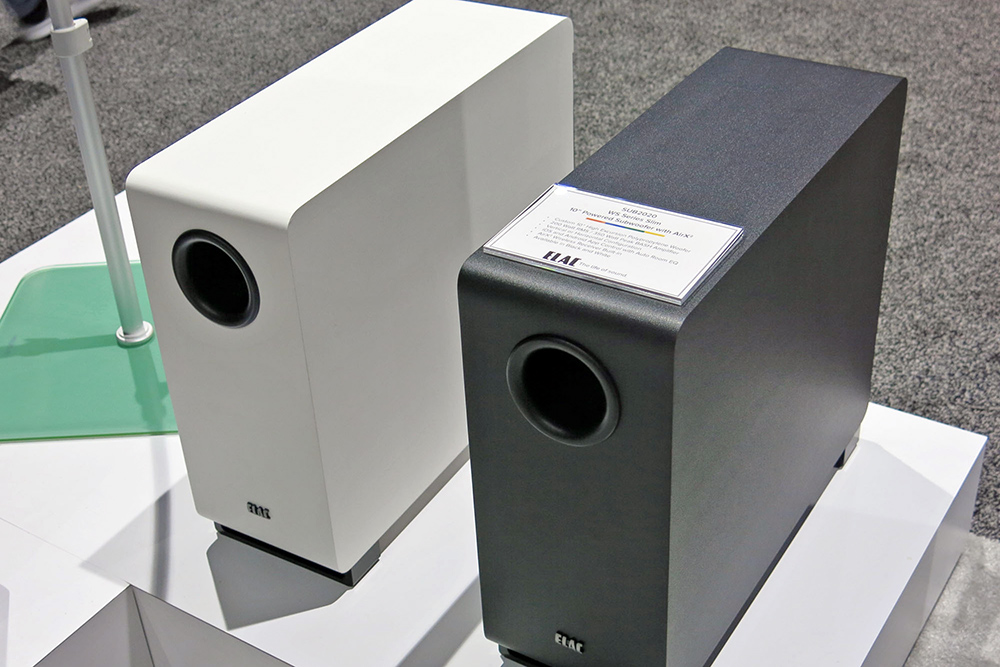 Elac’s SUB2020 ($699) has a slim cabinet that will help it slip into tight spaces, and its feet can be removed and attached to the corners of the driver baffle, allowing it to be placed horizontally on the floor, or under a couch or table. It has a 10" driver powered by a 200W amp, and offers the same smartphone-based auto/manual EQ and control features found on most of the company’s other subs. A smaller version, the SUB2010 ($549), features an 8" driver and a 120W amp. 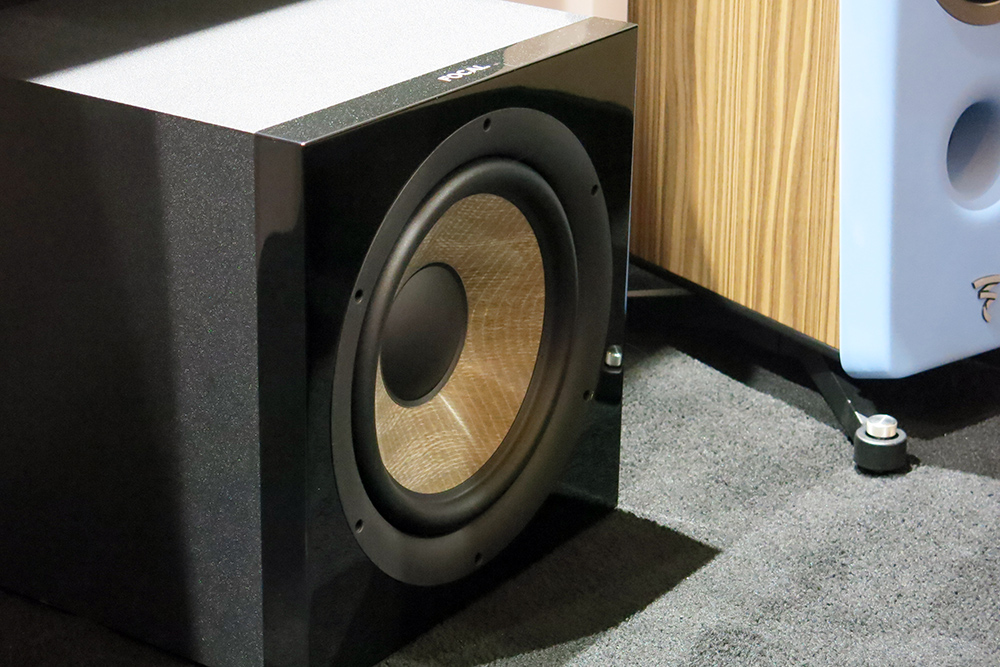 Focal’s Sub 1000 F ($1499) employs a 12" driver with the same flax cone material found on many of the company’s loudspeaker woofers, which are smaller. It’s powered by an internal 1000W BASH amp with a multiband active compressor that optimizes the compressor/limiter function in ten different frequency bands -- so the settings can be tightened up at frequencies where distortion and power handling issues are encountered, and left looser for frequencies where distortion isn’t as much of a concern. Many of the amps in today’s better subs have frequency-dependent limiters, but as I’ve found in my subwoofer output measurements, allowing different settings for ten bands should be a big help in optimizing subwoofer performance. 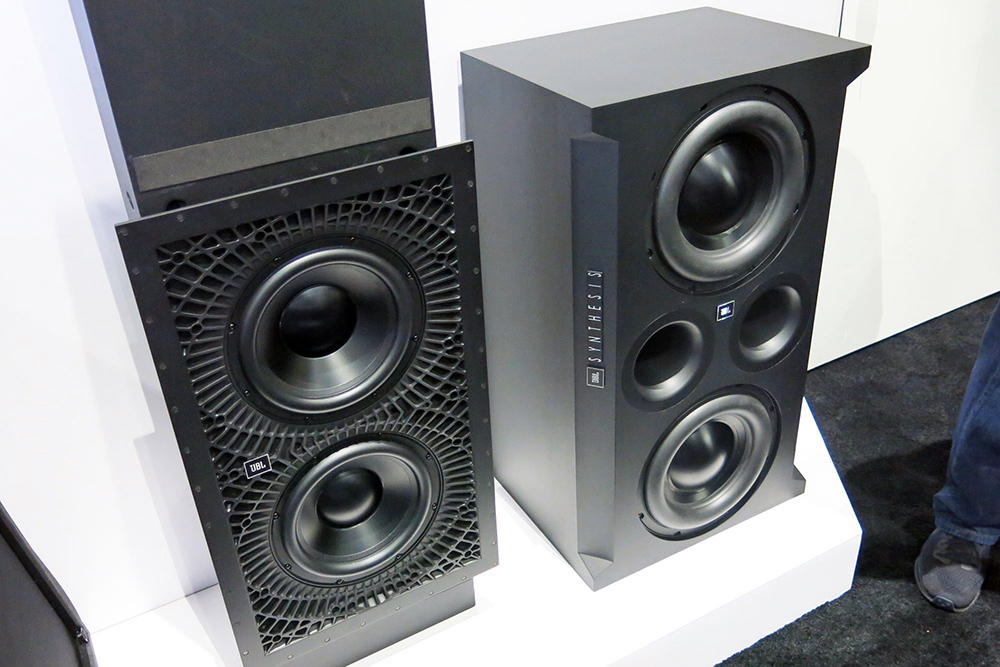 JBL used the CEDIA Expo to launch a couple of new Synthesis-series subwoofers. The SSW-3 in-wall model ($2500 without amp, shown at left) has dual 10" drivers in a cool molded baffle with ridges that help reduce resonances. The same concept has been used on previous models, but the ridges were hidden behind the baffle. Why the change? “It looks cooler,” Jim Garrett, Harman senior director of product strategy and planning, told me. The sub at right is the SSW-2 ($3500 without amp), which is intended for use either in-room or in installations where it’ll be built into a wall. It has dual 12" drivers, each with a fat 4" voice coil. 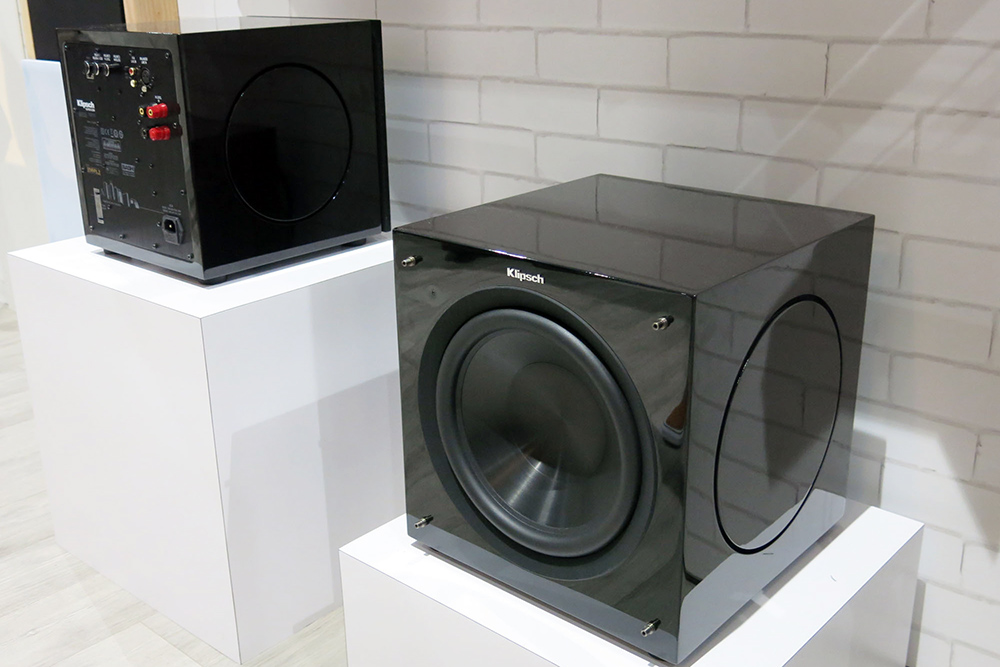 Klipsch showed its new compact subs in prototype form at CES last January, but now they’re ready to ship. The C-310ASWi ($1599.99, shown at right) has a 10" driver plus two 10" passive radiators with painted MDF panels on the front. The panels not only make the subs look nicer; they also serve to mass-load the passive radiators, thus tuning their resonant frequency. A 400W BASH amp powers the driver, and a smartphone app allows automatic or manual adjustment of EQ. A smaller model, the dual-8" C-308ASWi ($1299.99, shown at left), is also available. 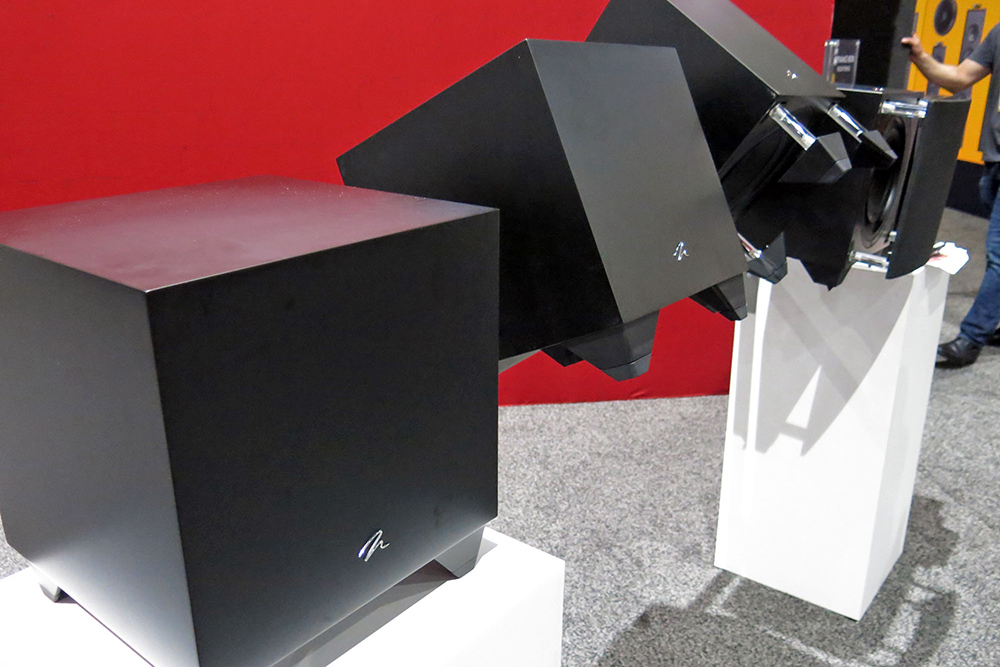 MartinLogan’s CEDIA Expo display demonstrated how the company’s new Dynamo-series subwoofers can be converted from the standard down-firing configuration to front-firing configuration. The five Dynamo models range in price from $399.95 for the 400 to $1699.95 for the 1600X. All models from the 600X ($599.95) and up feature Anthem Room Correction, which uses a smartphone app to automatically equalize the sub to suit the acoustics of the room it’s in. 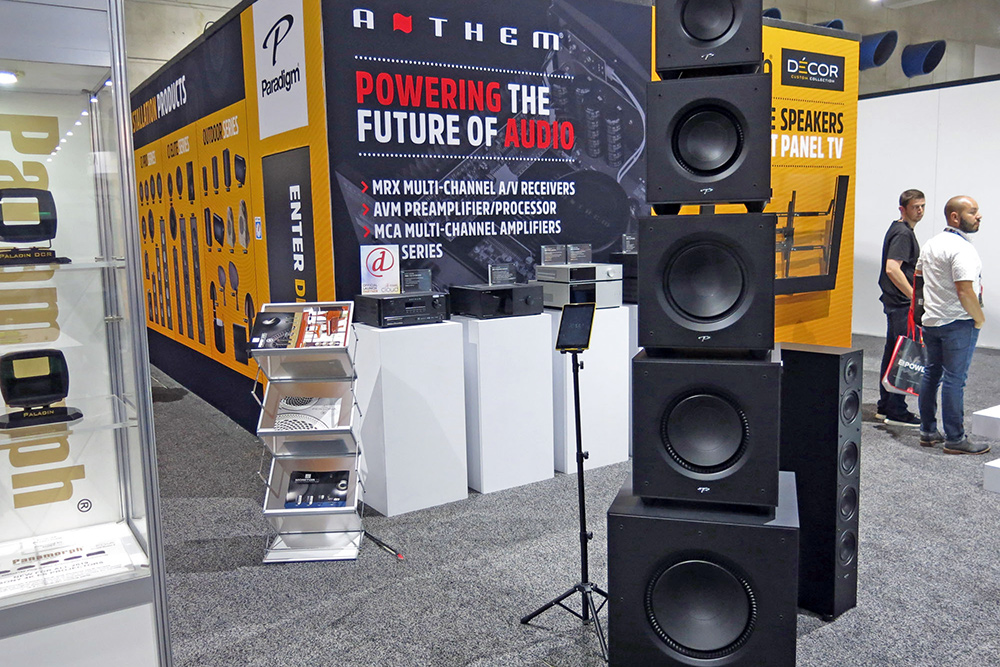 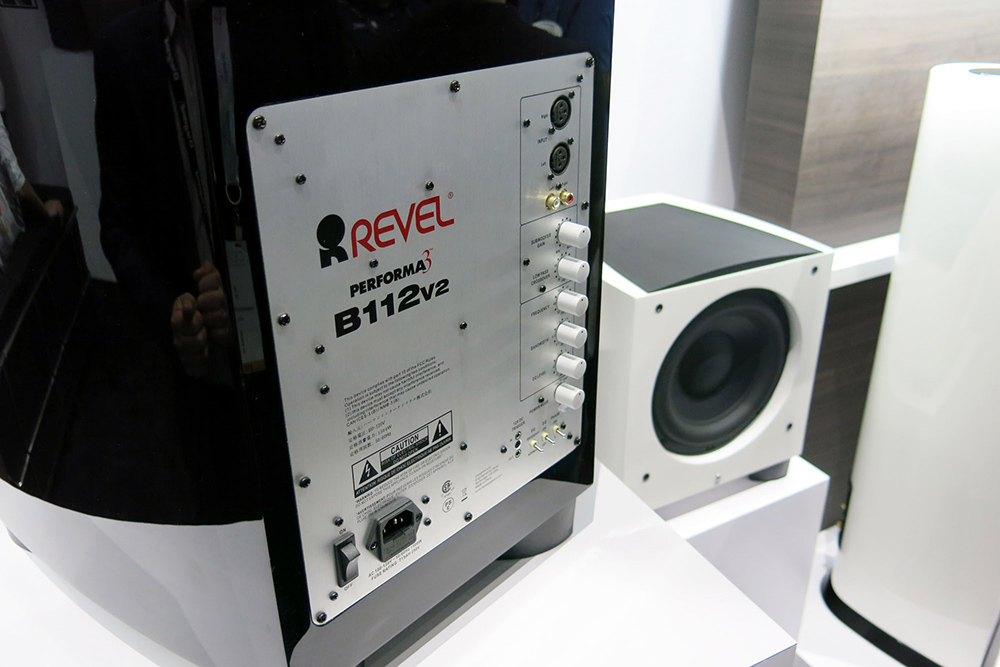 Revel’s new Performa3 V2 subwoofers include one of the most welcome features I’ve ever seen on a subwoofer: a single-band parametric EQ that’s set using old-fashioned knobs instead of the computer app required for the previous models. This means that users can easily notch out a room’s boomiest bass frequency, either by ear or using a basic audio spectrum analyzer (such as the AudioTool app for Android). Below the usual level and crossover frequency adjustments are the three knobs for the EQ: frequency, bandwidth, and level. The new subs use the same sealed enclosures as the previous models, and are still rated at 1000W of amplifier power, but feature new drivers. There’s also a slight price increase with the V2s: the B110 10" model is now $2500, and the B112 12" model is $3500. 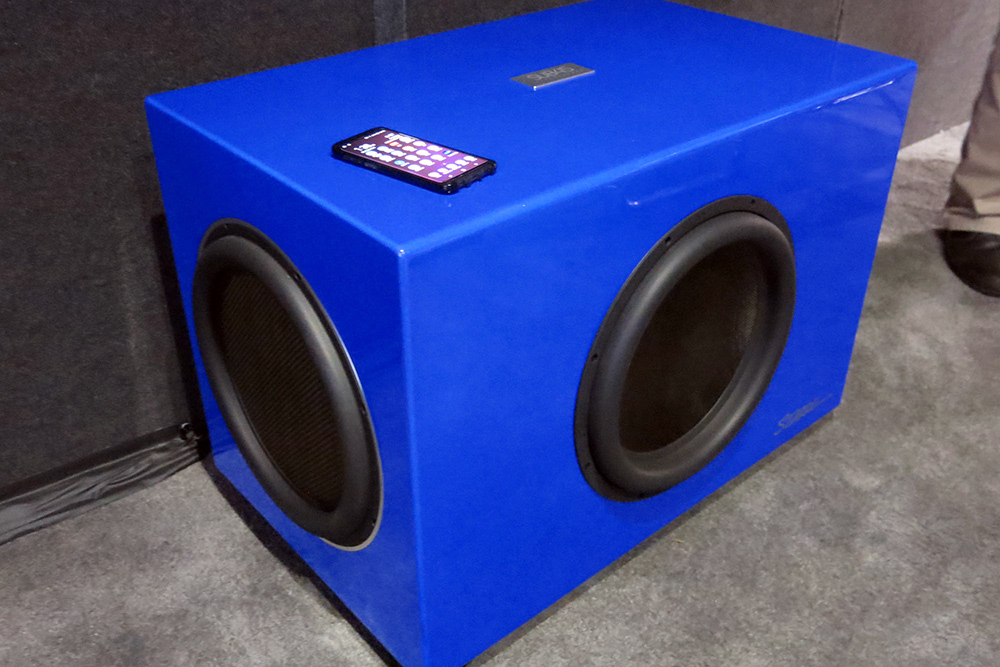 For really hardcore bass lovers, the most interesting sub at the 2018 CEDIA Expo was probably the Starke Sound Sub45 ($6960), which has a single 15" driver and two 15" passive radiators, plus an internal class-AB amp rated at 2500W. How does Starke Sound squeeze a 2500W class-AB amp into a subwoofer? Using the same tracking power supply technology the company used in its A2 amplifier, featured in our “CEDIA Expo 2018: Amplifiers” article. This monster’s rated 14Hz response comes at a price: it weighs 203 pounds (92.1kg) and measures 31.4" (800mm) long!