One of the trends I've noticed gaining steam over the past few years is getting big sound out of small packages. While walking through the Totem Acoustic demonstration room, I was introduced to the brand's new Kin Monitor, a pair of speakers so small that I originally mistook them for computer speakers -- that was until I heard them. Priced at $500 per pair, the Kins are intended to be paired with the matching Kin Sub, as they were at CES 2014, resulting in a sound that's simply massive for a minimonitor of their size. 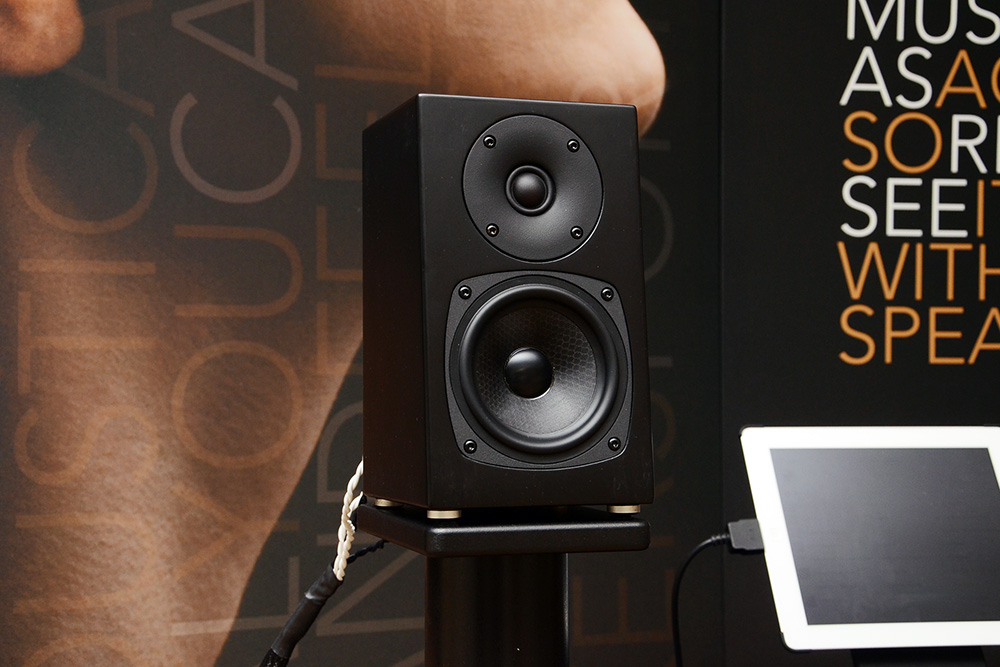 The Kin's cabinets are made from MDF and house a 1" silk-dome tweeter perched directly above a 4" woofer that uses hexagonal phenolic paper as its cone material. The woofer also has a neodymium motor system. Frequency response is rated from 90Hz to 20kHz, and the single crossover point is at 3kHz. The Kin's sensitivity is rated at only 87.5dB, which is average, yet it's said to impose a minimum 10-ohm load on your amplifier, making the speaker very easy to drive. The Kin will be available mid-2014, and will be offered in your choice of gloss white or matte black with a five-year warranty. 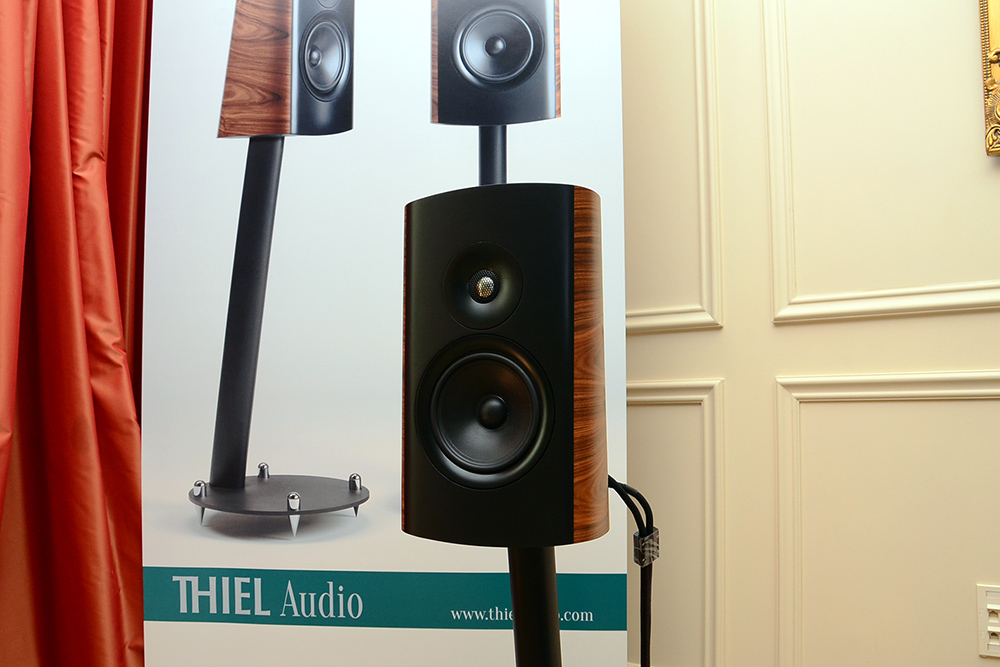 Totem wasn't the only company showcasing innovative new minimonitors. Thiel introduced its all-new TM3 stand-mount speaker, which has a very un-Thiel-like aesthetic. The cabinet of the TM3 is built from 12 layers of plywood that have been staggered and pressed together for a total panel thickness of .75". The display model had a very attractive Amberwood veneer. Reps say gloss black and gloss white finishes will be available at the time of release. The driver complement consists of a 1" aluminum-dome tweeter and a 6.5" woven-glass-fiber woofer. Thiel expects the TM3 to be available next month at a price of $2999 per pair. 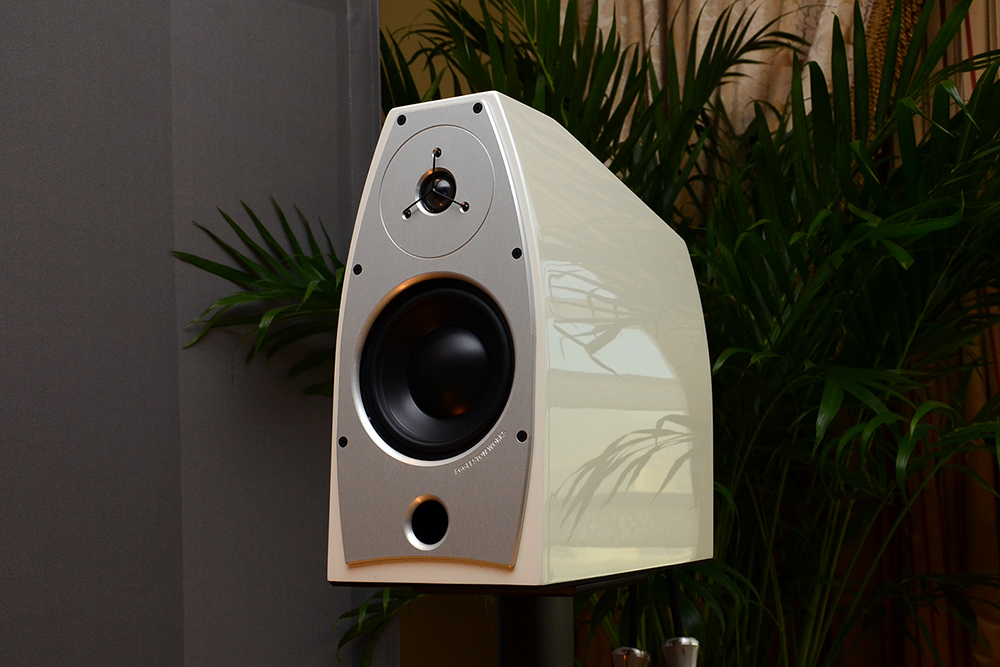 EgglestonWorks was also on hand introducing the Nico loudspeaker. Available now, the Nico is a two-way beauty that is constructed from four staggered layers of MDF that are pressed together and then cured for eight hours. The Nico uses a custom Morel 1" silk-dome tweeter and a custom Morel 6" woofer that is configured to run full range down to its bottom-end limit of 59Hz. The tweeter kicks in at 3kHz by way of a very simple first-order crossover. Priced at $3250 per pair, the Nico is warrantied for six years, and is available in a standard pearl white or metallic silver finish, as well as an optional custom finish in any color you choose at a surcharge of only $200. 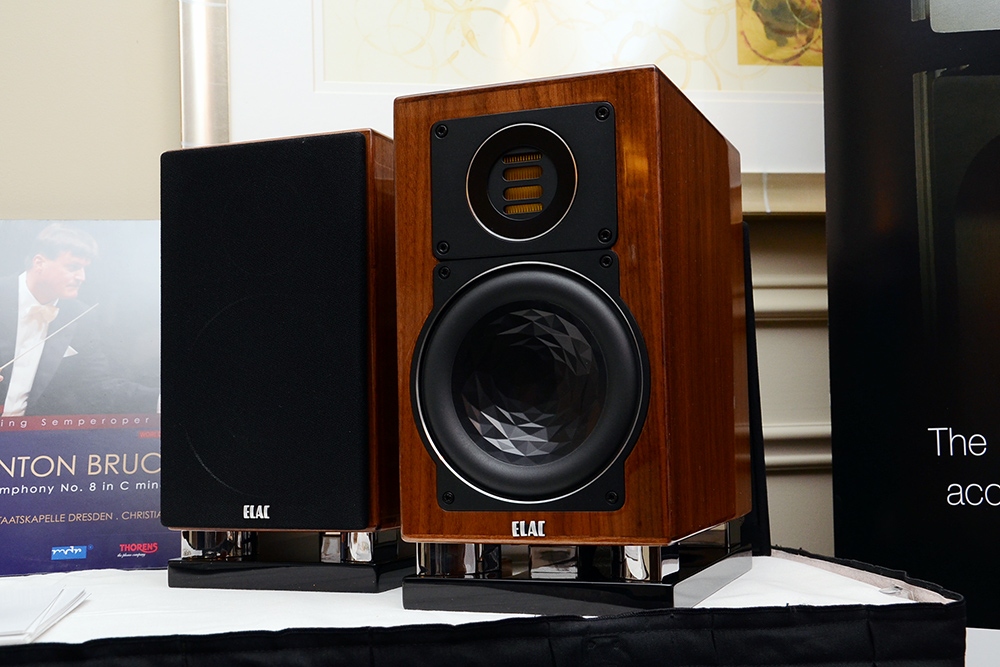 Impressed by what I saw and heard during the EgglestonWorks demo, I was a bit skeptical about finding another equally captivating stand-mount speaker. Then I stumbled upon ELAC's room and was introduced to its new AIR-X 407 wireless multi-zone monitors. The 407 speaker system consists of active loudspeakers equipped with what ELAC calls its AIR-X AMP amplifier units, which are supported upon the AIR-X BASE platform, acting as the central control unit for the speaker. Audio signals can be losslessly streamed at 24-bit resolution with a sampling rate up to 48kHz, and can be sent from up to four different devices in three different zones. Onboard amplification consists of a 75W class-A/B amplifier for the woofer and a separate 30W class-A/B amplifier for the tweeter.

The AIR-X 407's driver complement includes a Jet ribbon tweeter and a 6" woofer utilizing a paper/aluminum/paper sandwich cone. The cabinet is made from 1"-thick MDF panels, and it vents through a down-firing port. It will be available in gloss black, gloss white, and gloss wood-veneer finishes. Should you not want to transmit signals wirelessly, the 407 is also equipped with one XLR and one RCA input on the rear of each speaker for wired connections. ELAC warranties the AIR-X 407 for two years and promises availability next month at a price of $4000 per pair.