The doors to the exhibit floors at CES in Las Vegas don’t open until 10 a.m. Thursday, but for the press, there’s plenty to see beforehand at events such as Discover Blue, which features all sorts of products using Bluetooth wireless technology, and Digital Experience, a colossal gathering of hundreds of companies offering gadgets as varied as drones, digital door locks, and “smart” hairbrushes. You won’t find a lot of audiophile-oriented products at these events, but you can find lots of interesting mass-market headphones -- many of which offer cutting-edge features rarely found in audiophile products, and which often sound quite good despite their modest prices. Here are the most interesting headphones and headphone-related products I found before CES officially opened. All prices in USD.

The $199 MVMNT XLs are among the first earphones from Braven, a brand known for Bluetooth speakers. The XLs are part of the wave of “true wireless” earphones, which use Bluetooth wireless to connect to a phone or tablet, and which also use a wireless connection between the left and right earpieces. A flashing laser light built into the back of the ear hook can be activated to make joggers and pedestrians more visible at night. 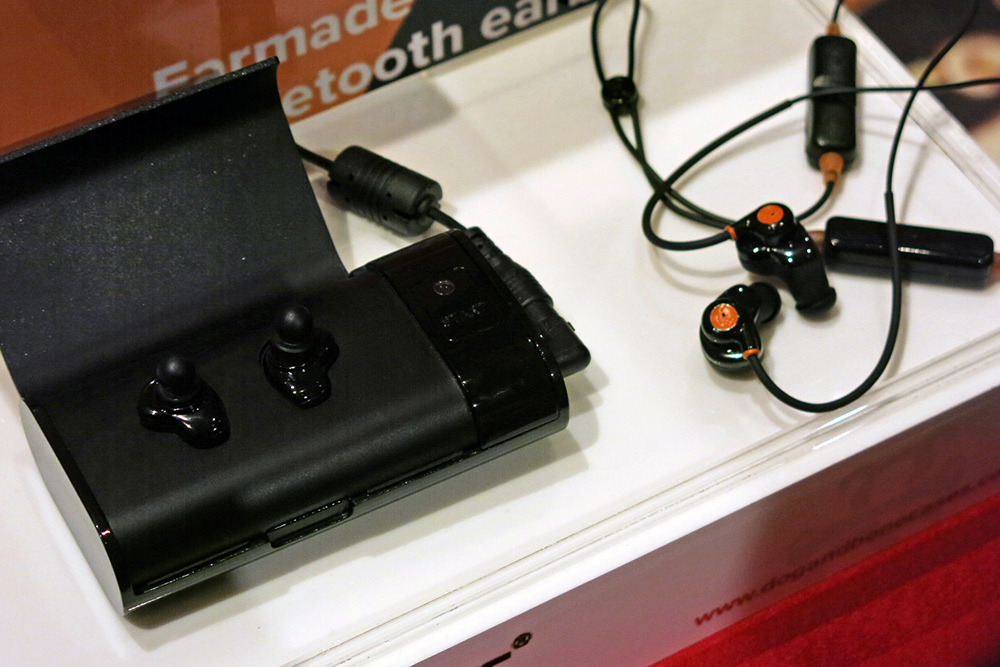 Dog & Bone’s Earmades are earphones you can custom-mold to your ears yourself. The outer pads are made of a firm material that becomes pliant when heated. Put the earphones in the included heating dock, wait a few minutes, then insert them into your ears. (Don’t worry; they don’t get hot enough to cause discomfort.) In four or five minutes, the material firms up again to create a seal the company says is comparable to what you’d achieve with custom-molded earphones. The $159 earphones are IPX5-rated for moisture resistance, and the company plans to offer aftermarket pads that are tuned for different sounds, such as extra bass. 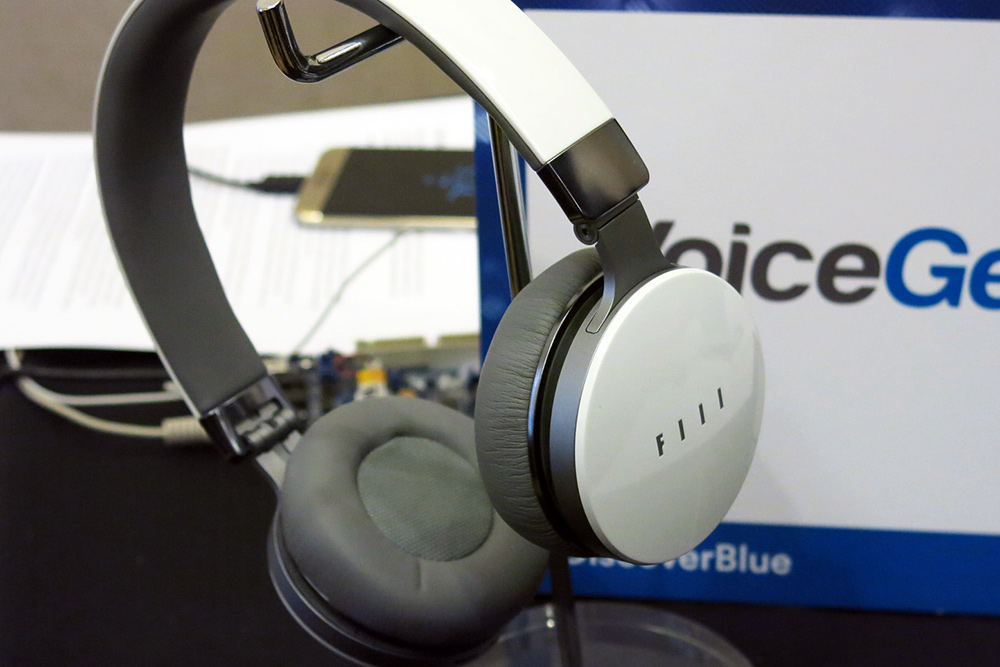 The Fiil Diva Pro is the first prototype headphone shown using Sensory’s VoiceGenie technology, which brings Amazon Alexa voice recognition capabilities to headphones. The headphones themselves have enough voice recognition power to perform tasks such as “volume up” and “play music,” similar to what’s found in many Bluetooth headsets. But when the user speaks an Alexa command, such as “Alexa, play Sonny Rollins,” the headphones use the Alexa app on your phone to access cloud resources for voice recognition and media files, but they go through the LTE wireless network rather than using Wi-Fi as an Amazon Echo speaker does. The VoiceGenie software runs on Qualcomm CSR Bluetooth chips, commonly used in Bluetooth headphones and speakers. The VoiceGenie-equipped Diva Pro is expected to ship in Q3, at a price TBD. 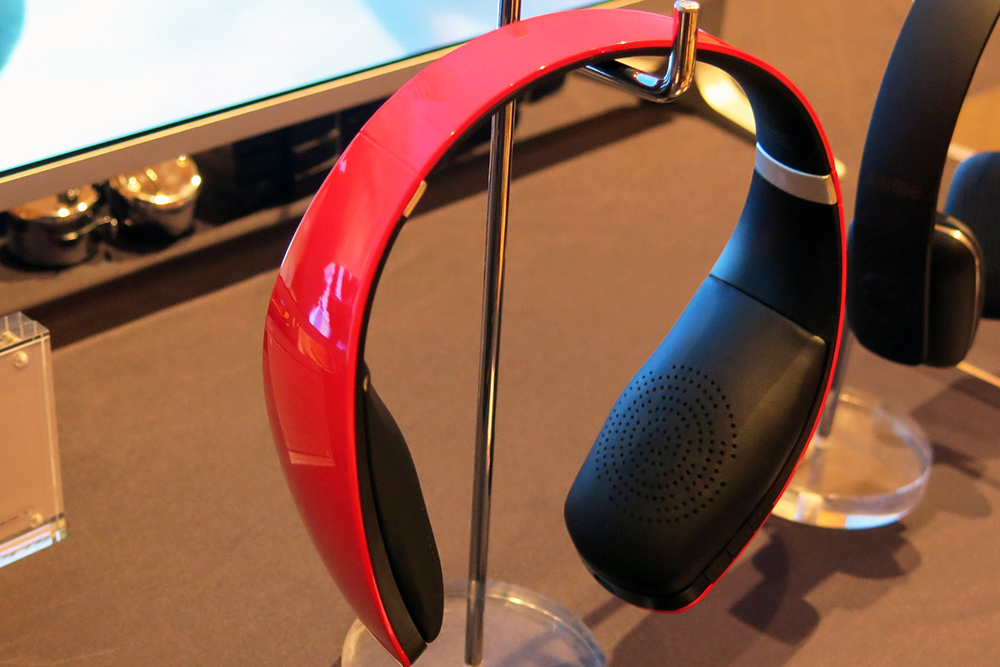 LeEco, the company that bought Vizio, is also entering the North American market with products under its own brand. The company showed a set of Bluetooth headphones that struck me for both their sleek design and their price, which is just $39. The EB30As are available in six colors, sound surprisingly nice, and are more comfortable than they might appear. 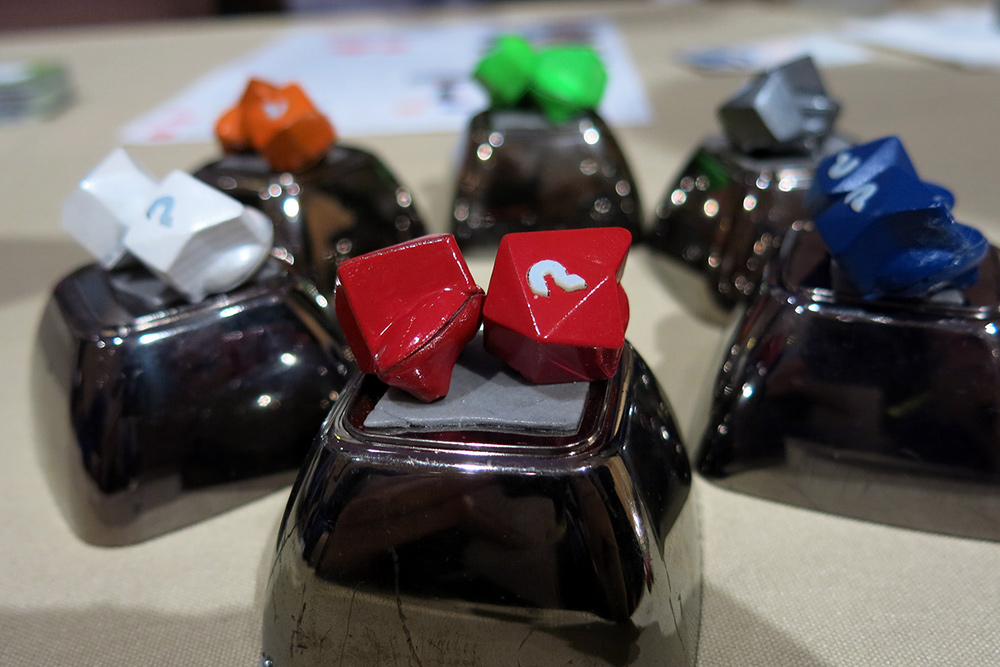 CES hadn’t even officially opened yet as I wrote this, but already I was feeling besieged with “true wireless” earphones, which in many cases seem nearly identical and, sadly, not all that practical. But the Phazon earphones distinguish themselves by being guaranteed not to fall out. And if you lose one, a locator app in your smartphone can help you find it. The Phazons are IP68-rated, which means they’ll survive nearly any mishap involving water or dust. They’ll retail for $199 and are rated for up to six hours of battery life. 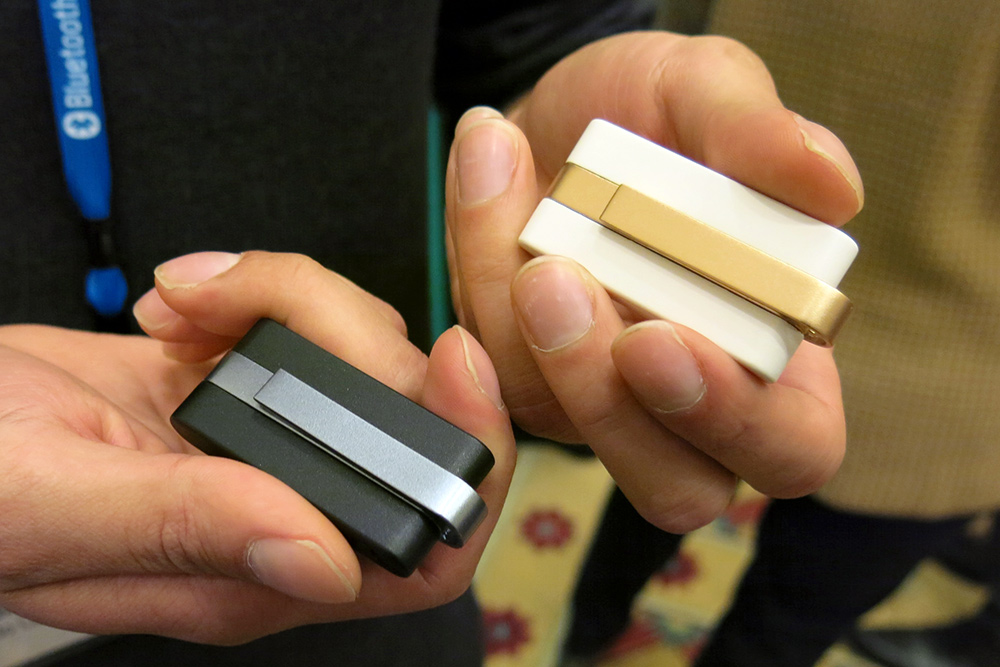 Podo Labs’ $25 Jack Bluetooth adapter is designed for those who want to use their existing analog headphones with smartphones that lack analog output (such as the iPhone 7). There are plenty of Bluetooth adapters like this available now; what distinguishes Jack is that two of them can be paired so that two people can listen to the same Bluetooth source. 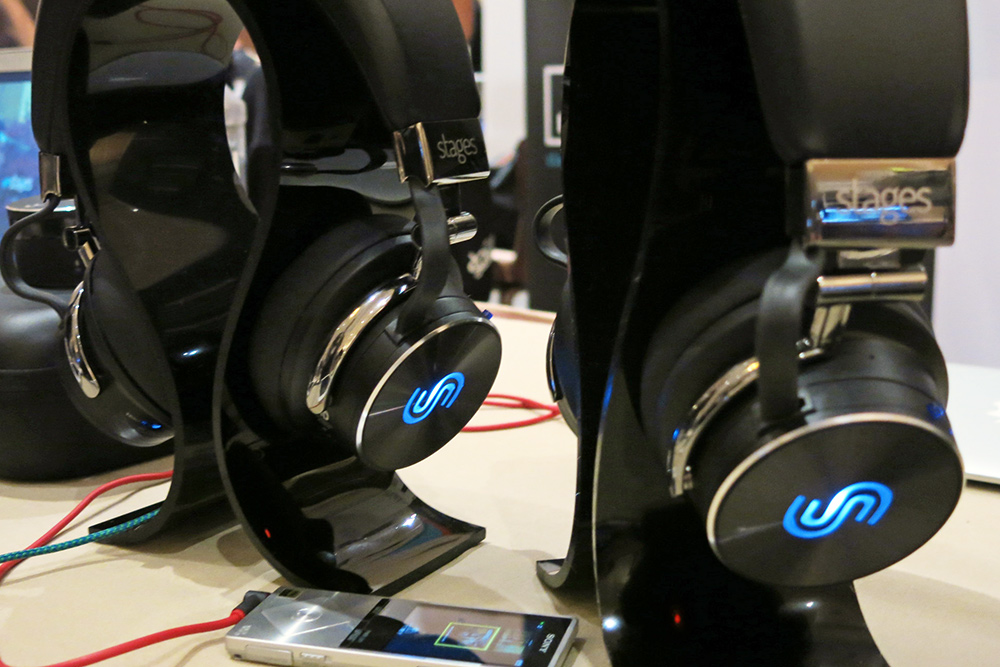 The Stages Hero headphones incorporate an eight-microphone array on the top of the headband, so the user can adjust the direction of the noise cancelling through a smartphone app. The user can set a specific direction from which sound is allowed through (such as directly in front for one-on-one conversations) or a wider angle of pickup (for conversations with multiple people). The headphones can also be programmed to respond to a “wake word” that momentarily deactivates the noise cancelling. For example, if the user’s name is John, the Heroes would allow “John, take out the trash” or “John, where are those TPS reports that were due yesterday?” to come through. Earlybird pricing through Indiegogo is $299 for the Heroes, or $199 for the Sidekick, a standalone module that brings the same capabilities to any standard headphones. 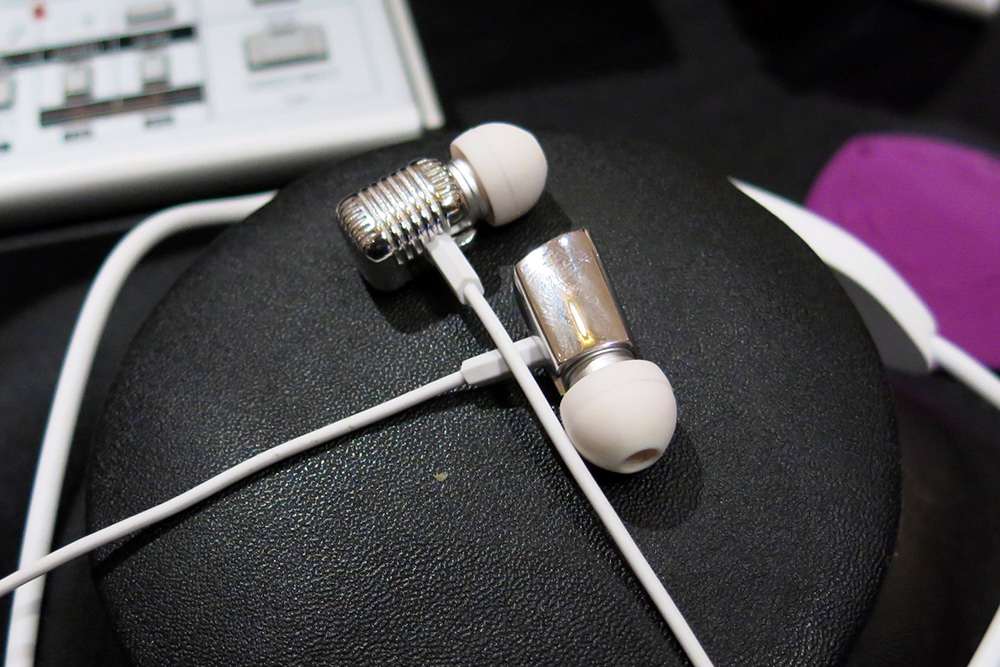 The $169 Forza Metallo Wireless combines V-Moda’s stylish visual aesthetics with the neckband-style wireless design that’s so popular now. The neckband provides room for a larger rechargeable battery, and it also vibrates when a call comes in. Dual microphones allow noise cancelling for clearer phone calls. The Forza Metallos are said to be sweat and moisture resistant, although they don’t carry a specific IP water-resistance rating. 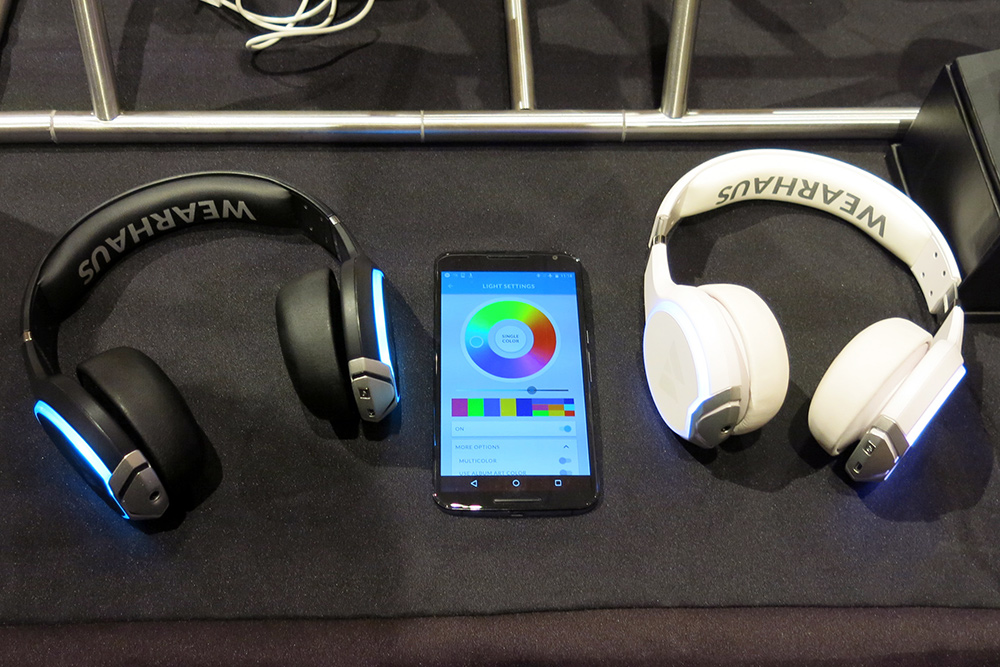 The Wearhaus ARCs might be the perfect headphones for couples, or at least for very close friends. The $199 ARCs work like standard Bluetooth headphones, except that they can also use Bluetooth to broadcast the same signal to another set of ARCs, so two people can listen to the same Bluetooth source device simultaneously. An app allows users to adjust the color of the headphones’ internal LEDs. “Usually people set it to match their outfit,” a company rep said.