Florida Audio Expo, held February 8 to 10 at the Embassy Suites by Hilton Tampa Airport Westshore hotel, is a brand new show. It takes time for any new show to build and find its place in the hi-fi world, so when I arrived for this inaugural event, I wasn’t sure how to approach the coverage, because I didn’t know what I’d see when I got there. Thus, I spent the first two hours on February 8 combing through the seven exhibit floors to determine my best course of action. By the time I got to the final floor, I knew that if I focused only on new products, which is what we usually do, there wouldn’t be enough to write about. But I did see some products that, while not necessarily new, were interesting to me and likely to our readers. As a result, I decided to focus on new and/or interesting products, with the first part of that coverage reflected below. All prices are in US dollars. 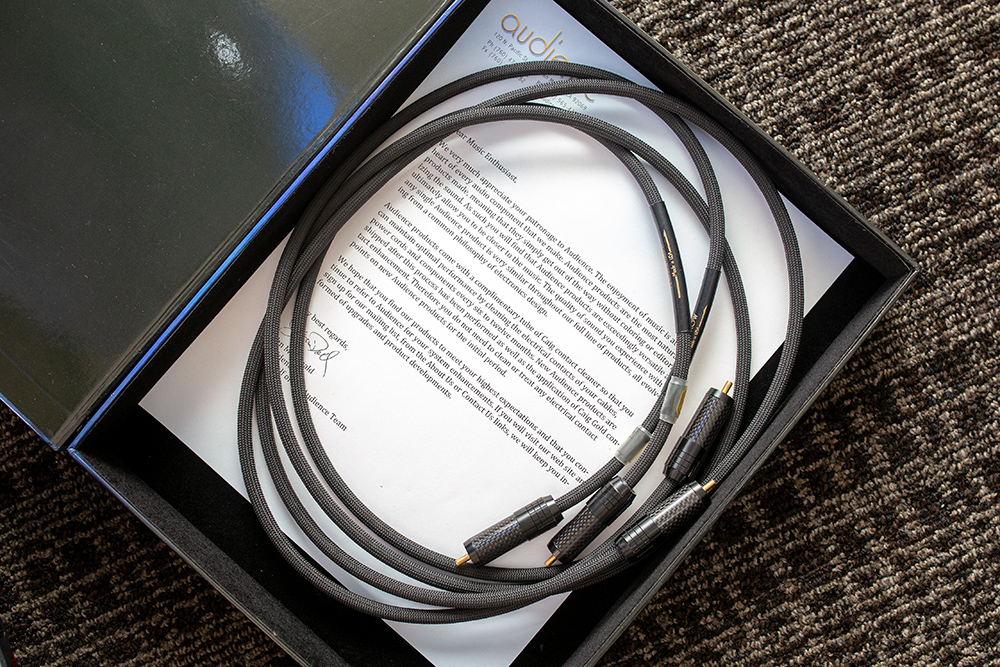 When I walked into the room of Florida-based retailer House of Stereo, I found a product that was actually new: Audience frontRow single-ended interconnects, which start at $3300 for a 1m pair. Also in the new top-of-the-line frontRow series are balanced interconnects, as well as phono, digital, speaker, and power cables. According to the company’s press release, sent just over a week ago, “Every aspect of frontRow cables has been considered and refined, including cable geometries, metallurgy, connectors, shielding, dielectric, and jacketing materials and the interaction between conductors -- even details like the mechanical resonant frequencies of the materials used.” I know there are many audiophiles who approach cables as seriously as they do the selection of their electronics and speakers -- and often spend just as much on them. For those audiophiles, Audience’s new lineup will be mandatory to check out. 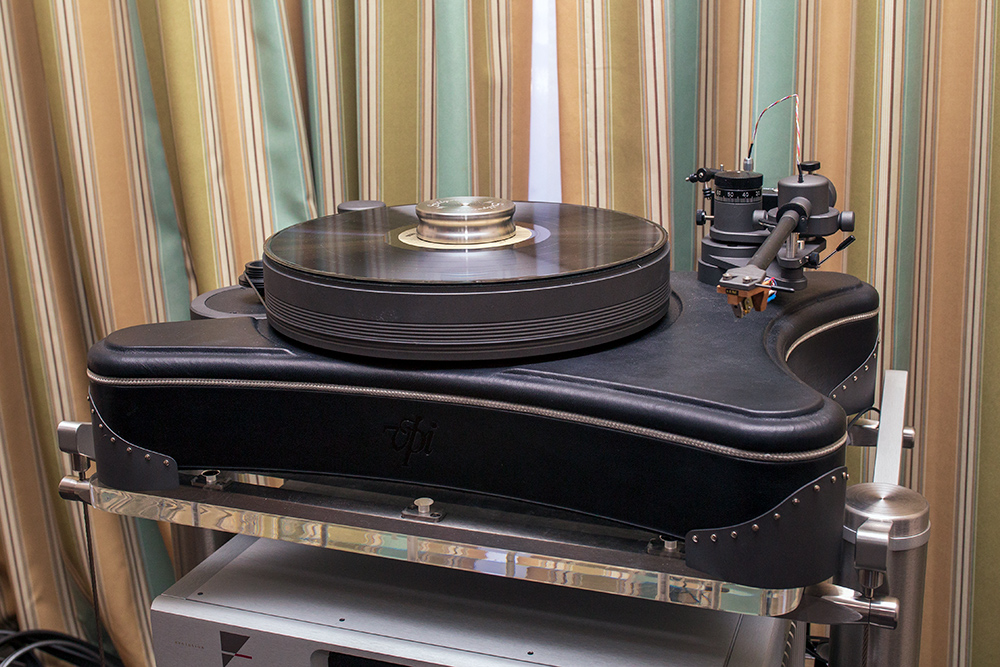 In another House of Stereo room, I ran into a VPI turntable that isn’t new, but it’s really interesting -- and flat-out cool. Part of the company’s Bespoke line, it’s called Designer Prime, and the company has made a very limited number of them. According to the company’s website, “Two years ago, we started creating leather-wrapped turntables for Master & Dynamic. This opened the door for possibilities for craftsmanship leather working. While we don’t want to fully embrace this as a company and want to stick to the core and consistent product line, we had a customer request a leather Prime. Last year we made one sample and received very positive feedback. We commissioned our leather worker to make 15 more of these products. Five in brown and ten in black leather.” Obviously, this is one of the ten black leather ones, and its price is $10,000, including tonearm (but no cartridge). Into collector’s items? A Bespoke Designer Prime could be it. 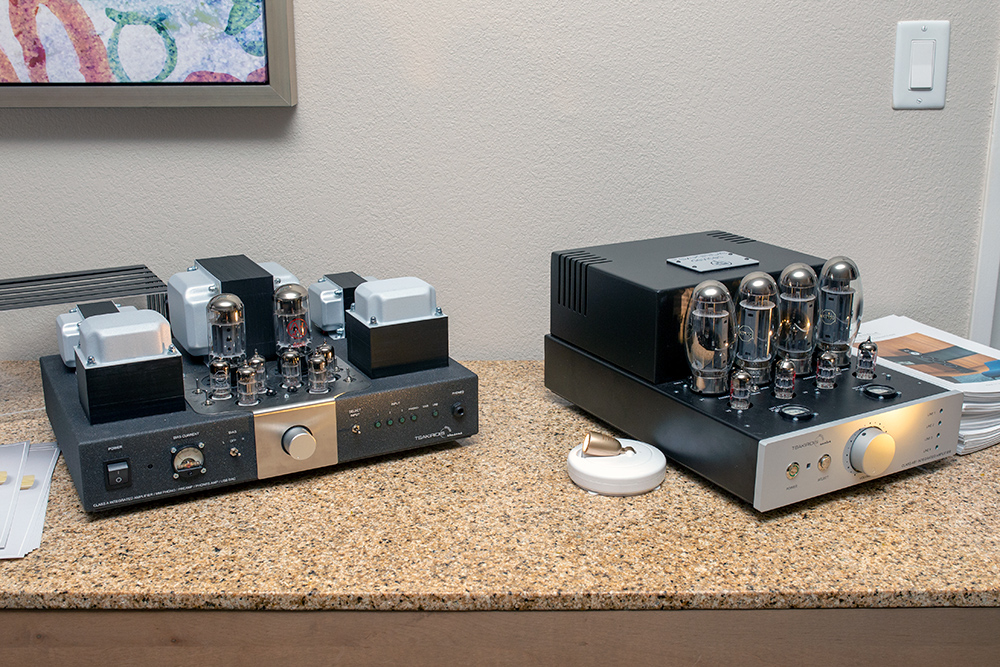 “These are the highest-value products you’ll find anywhere,” one of the guys from Antal Audio Group proclaimed. Antal is the US distributor for Tsakiridis Devices, a Greece-based company founded in the 1980s, with all the products still being designed and manufactured there. When I looked at the two products on the table display, I couldn’t immediately refute that claim. On the right is the Aeolos Ultra integrated amplifier, which uses KT150 tubes for a claimed output of 70Wpc. It has four sets of inputs, an Alps volume control, a remote control, and a very reasonable price tag of $2995. On the left is the Theseus integrated amplifier, which can produce from 8 to 25Wpc, depending on which output tubes you use (KT150s give the highest power). Besides providing pre- and power amplification, it also has an onboard DAC with a USB input, a moving-magnet phono stage, and a headphone output. Its price is $1995. Surprised that it costs only that much, I took a closeup . . . 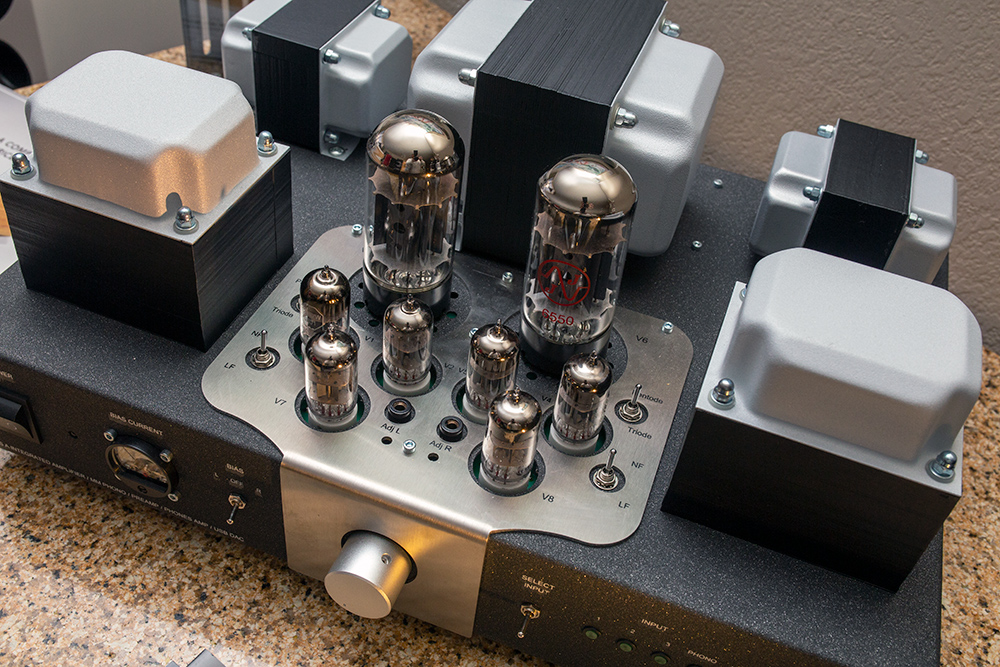 . . . look and photo. Then I picked up the 2019 price list and found the company makes a total of 20 products, all with very reasonable retail prices. No question, the guys at Antal could be right on the mark about value when it comes to Tsakiridis Devices. 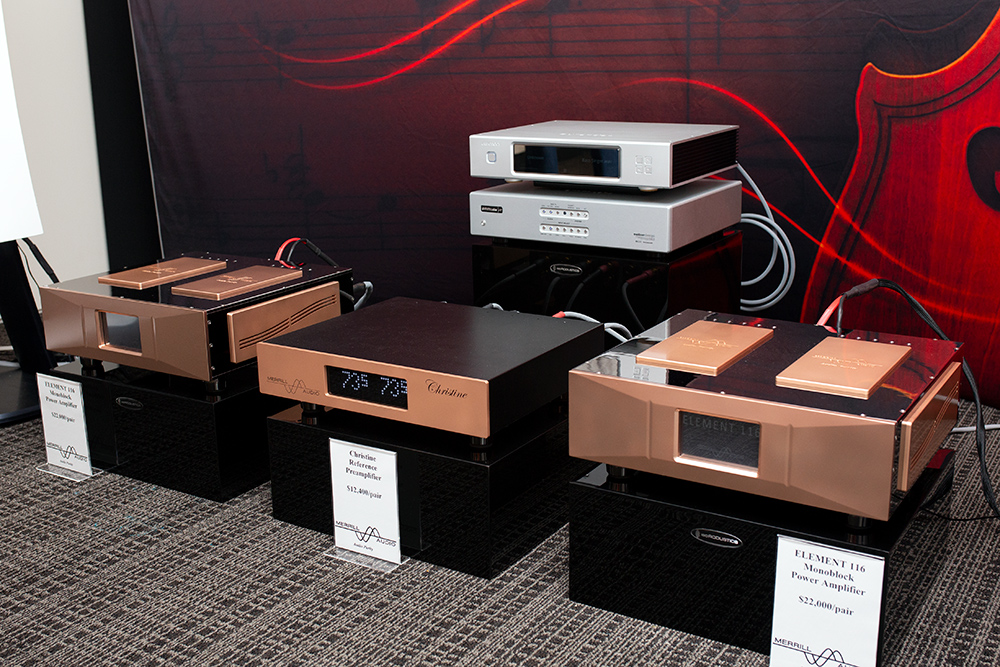 I confess that when I asked where Merrill Audio was located and learned that they’re in New Jersey, I felt embarrassed. You’d think that after doing this job for more than 20 years, I would’ve known -- actually, I should’ve known. But somehow, the company has flown under my radar. At the Florida Audio Expo, the company was showing its Christine Reference preamplifier ($12,400), which was placed between what I homed in on: two Element 116 monoblocks ($22,000/pair). The Element 116 has a claimed output of 300W into 8 ohms, 600W into 4 ohms, or 1200W into 2 ohms. According to the company’s literature, two key technical details of the Element 116 are the use of the “most advanced and newest Gallium Nitride transistors available,” which allows them to achieve “speeds into the gigahertz range,” and improved manufacturing techniques for the printed circuit board (PCB), the result being “that parasitic inductance and capacitance have been reduced to near zero.” From what I could see, this company also has the . . . 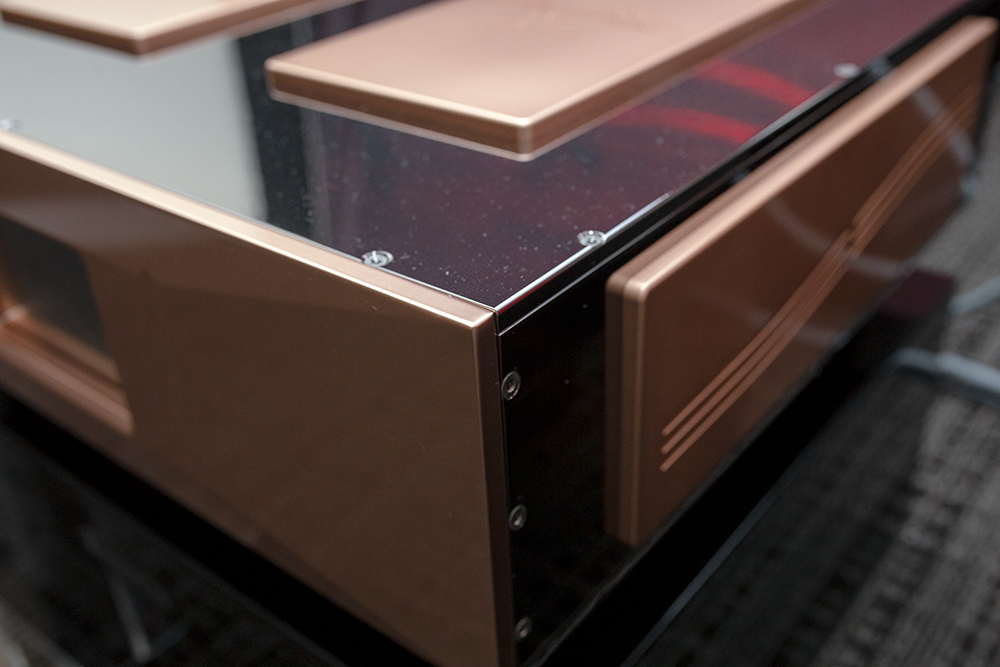 . . . manufacturing of its metalwork down -- there was rose-gold plating on the front panel and accent pieces, as well as black-nickel plating for the rest of the case. The color combo not only looks elegant; it’s one I’ve never seen on audio electronics before. Merrill Audio was using these amps to drive a pair of Muraudio SP1 loudspeakers, which I am more than familiar with since I reviewed them for SoundStage! Hi-Fi last year, and the sound was fantastic. Merrill Audio is no longer an unknown brand to me -- time to follow up with a review. 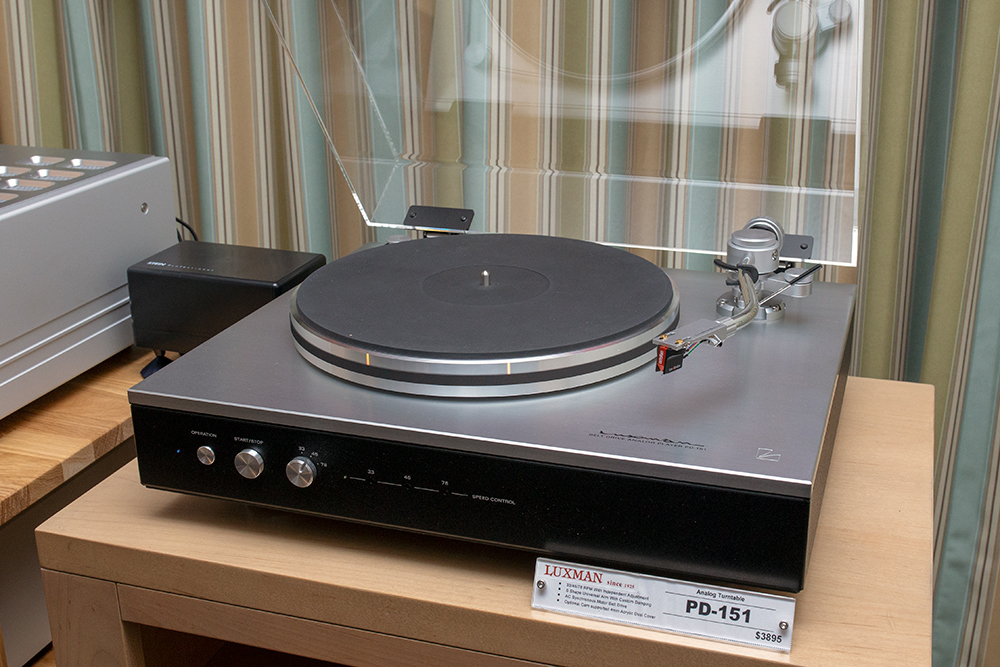 Here’s what looks to be a hot new turntable: the PD-151 from Luxman, a belt-driven design priced at $3895 with tonearm (but no cartridge). Though the PD-151 was announced last year, it became available only this month. According to Luxman America’s Jeff Sigmund, the PD-151 contains many of the advanced technologies found in the much more expensive PD-171A turntable, brought down to a more affordable price. As with other Luxman components I’ve experienced, the PD-151’s build seems excellent and its styling is superb. I particularly like the look of the controls (operation, start/stop, and a speed selector for 33 1/3, 45, and 78rpm records), as well as the convenience of having them on the front, not under the dust cover, which is where you often find them. If I were a “vinyl guy,” I’d be requesting one for review. I’m not, unfortunately, but if we can get a sample in, we’re going to hightail it to one of our gurus to see if it sounds as good as it looks. 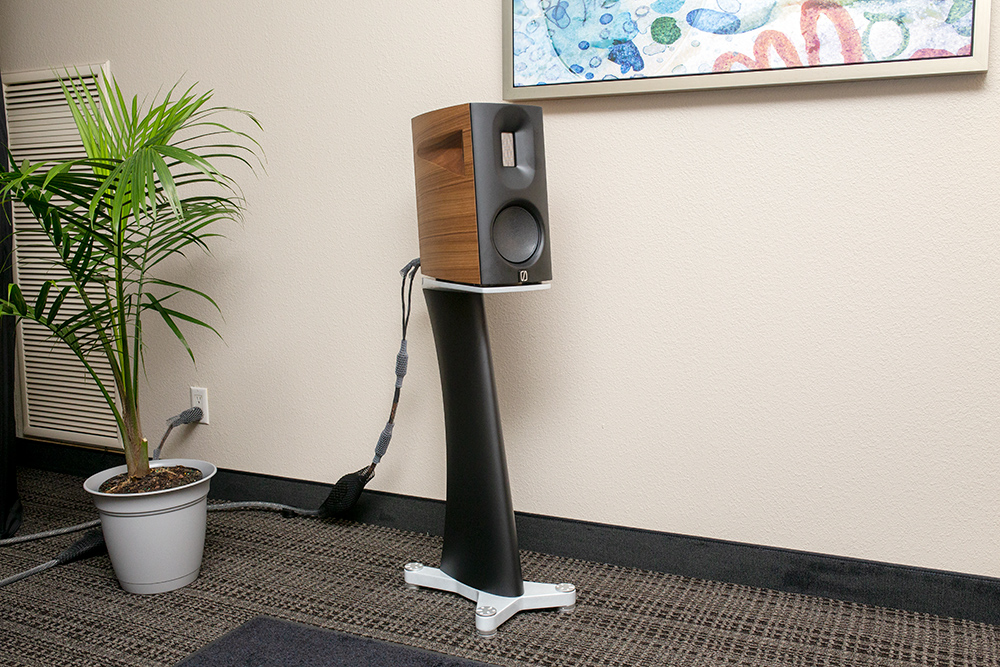 The Børresen 01 minimonitor was unveiled at Rocky Mountain Audio Fest last year, but that was apparently a prototype. At the Florida Audio Expo, I got to see and hear the finished product, driven by Aavik electronics. I was taken aback by its big, spacious sound -- the spatiality and frequency extension reached far beyond what I expected from a speaker this size. But I was also a bit surprised by the price: $30,000 to $36,500 per pair for just the minimonitors, depending on finish, plus another $5000 for the matching stands. Not cheap! Yet it looks very nice and has some bespoke tech to it, including its ribbon tweeter, carbon-fiber-based midrange woofer, and some nifty little vents on the sides . . . 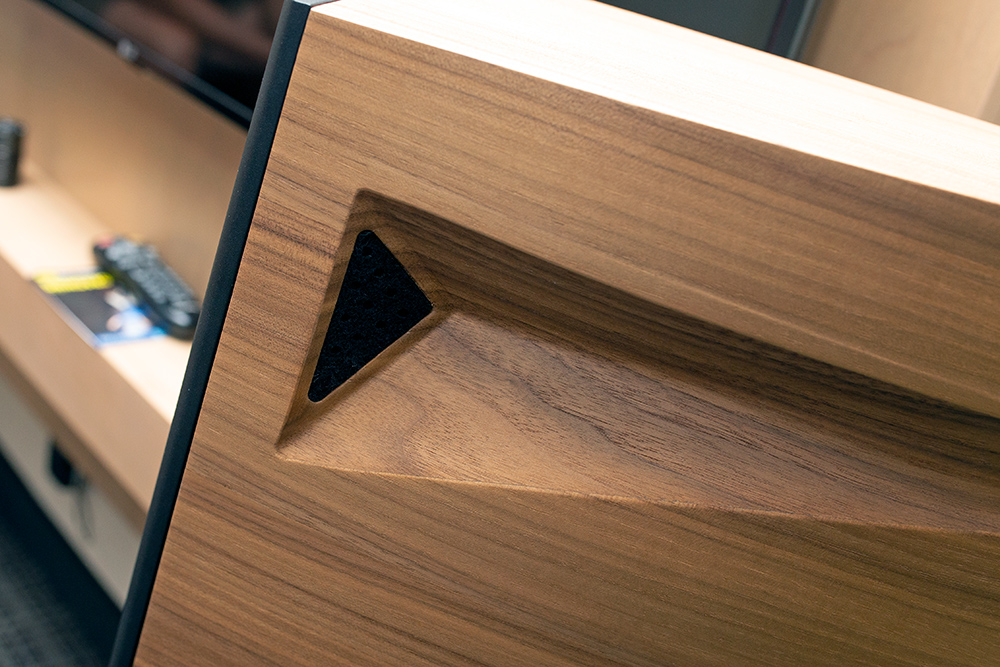 . . . that allow rearward airflow from the tweeter to be ushered out of the cabinet, which they say reduces compression. If two-way minimonitors are your thing and the 01’s price tag doesn’t send shivers down your spine, definitely check out this Danish design.