As I continued on my trek for new and/or interesting products at the Florida Audio Expo, I became increasingly convinced that the show has a good future, for a few reasons. One is the time of year -- Florida in February creates a nice winter break for us in the colder climates. As well, since CES for high-end hi-fi is pretty much dead, we need a beginning-of-the-year show to get things rolling. February isn’t quite the beginning, but it’s close enough. I also thought the venue, the . . . 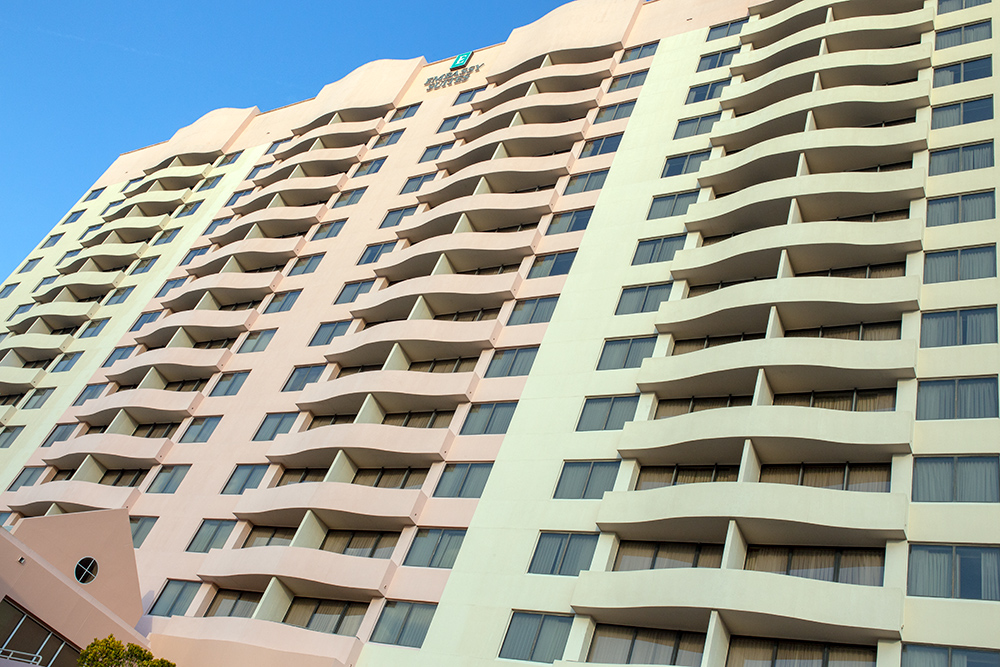 . . . Embassy Suites by Hilton Tampa Airport Westshore hotel, to be, overall, a good one. Although I usually dislike hotels for hi-fi shows, this venue is close to the airport, the rooms are reasonably spacious, there are plenty of amenities within the complex itself . . . 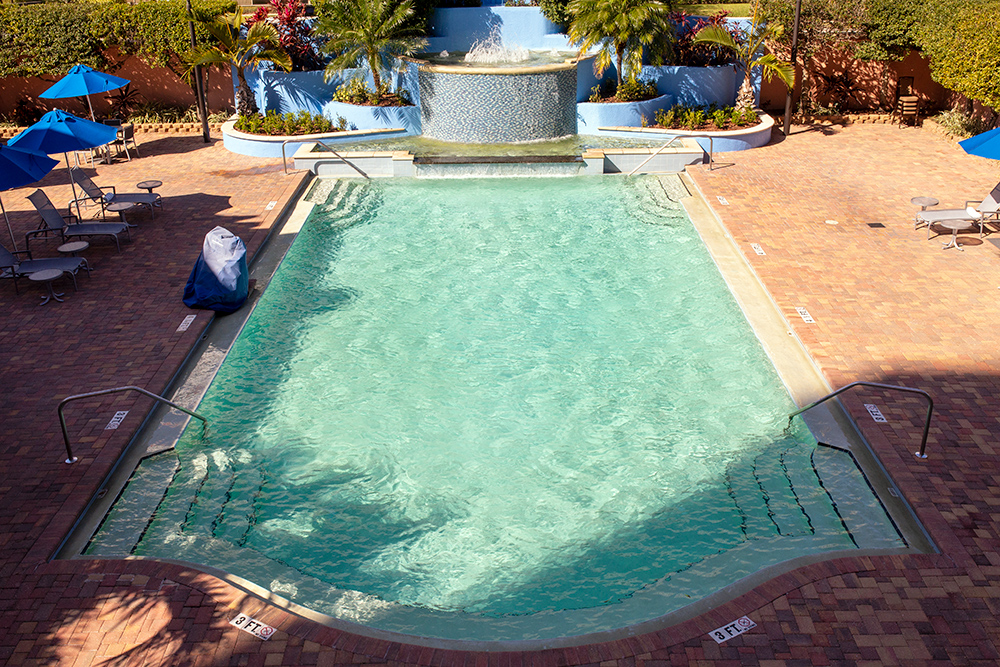 . . . and there are plenty of nearby restaurants for relaxing. For the time being at least, the Embassy Suites seems like a good start. I also found enough exhibitors and products to cover to make my trip worthwhile. In my opinion, these factors combine to make for a very positive first-show experience. This leads me to speculate that there will be 50 percent more exhibitors next year, which also means more products to cover and, likely, a greater chance of product debuts, which are the usual focus of our show coverage. In the meantime, here’s my next round of products, with all prices in US dollars. 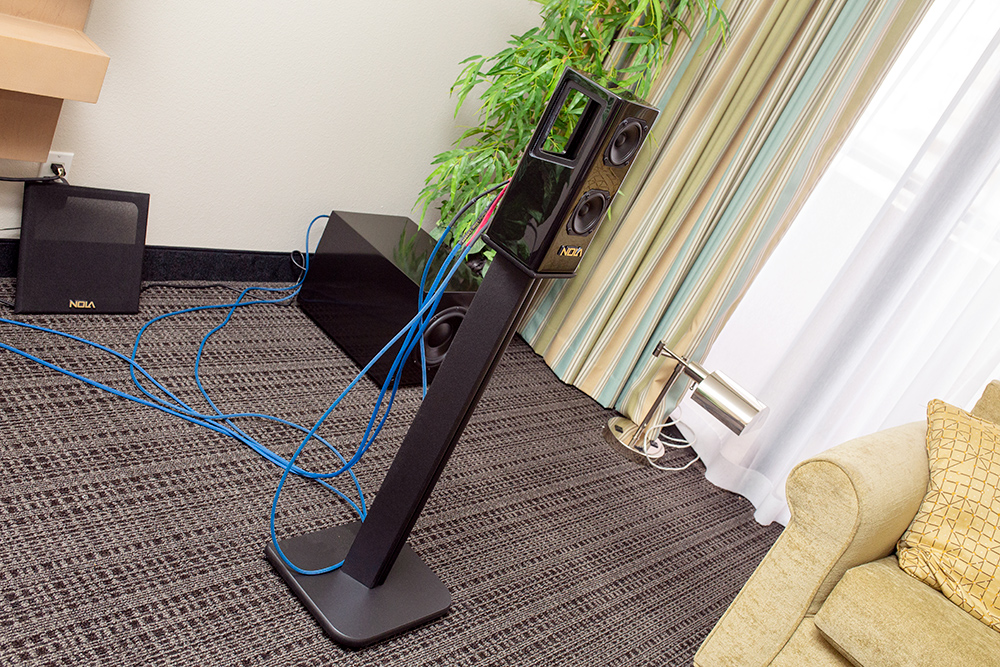 In 2016, Nola introduced the Brio Trio system, priced at $3500. The Brio Trio is a 2.1 setup comprising a single subwoofer with an 8" long-throw woofer and with a 250W class-AB amplifier driving it, plus two small satellite speakers, each having two identical 3.5" drivers. The satellites are peculiar in that the . . . 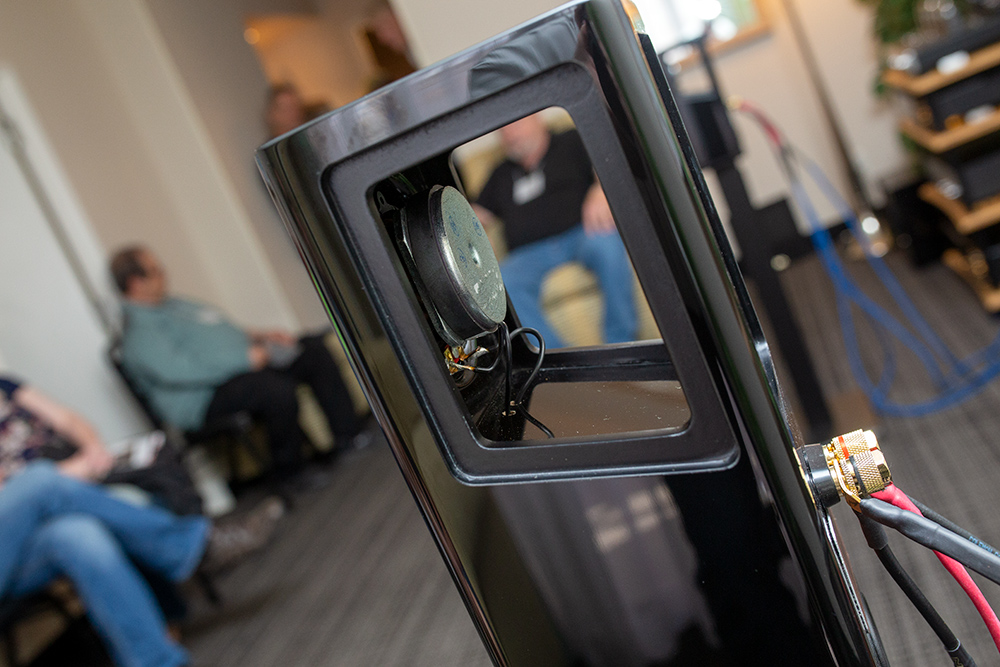 . . . top one has no cabinet walls behind it, so it radiates sound in a dipolar fashion (front and rear, out of phase), while the bottom one operates in a ported chamber. According to Nola’s literature, “This configuration combines the natural imaging and expansive soundstage provided by the open baffle mounting with the dynamic presence and impact of the enclosure-mounted driver.” Since these satellites are tiny -- each measures only 12"H x 5.5"W x 5.5"D -- Nola recommends a stand height of 31", which is tall to my eyes. It’s also a little scary, as you could easily imagine them tipping over. This year Nola introduced the Brio Quatro, which is the same thing but with the addition of one more subwoofer -- so it’s a 2.2 system. The additional subwoofer increases the bass output, but it can also, with proper placement, load the room more evenly. However, that extra subwoofer also increases the system cost to $5000. 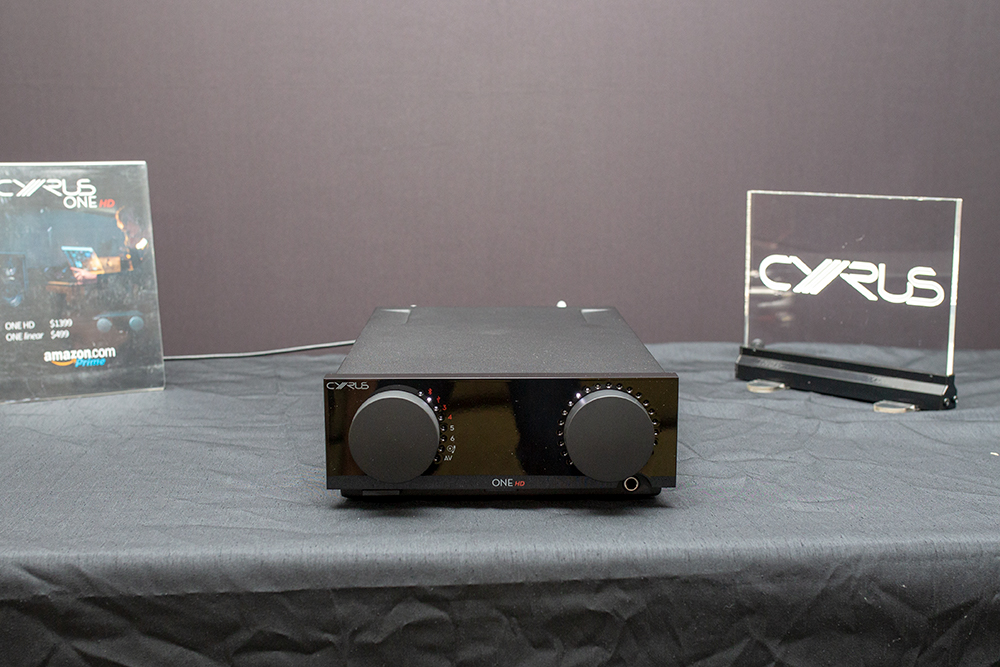 The Cyrus One HD isn’t all that new -- it was introduced last year, and you can find quite a few reviews online if you look around. But this was the first time I took a close look and listen to it, and I liked what I saw and heard. Priced at $1399, it’s more than just the simple, compact integrated amplifier it appears to be. It has digital inputs (USB, optical, and coaxial) feeding its onboard DAC (DSD64, DSD128, and PCM up to 32-bit/192kHz are supported), a moving-magnet phono stage, a class-AB headphone amplifier, aptX HD Bluetooth capability, and a fairly powerful amplifier section (up to 100Wpc at 6 ohms) based on the company’s proprietary class-D technology, which it began developing about ten years ago. Part of the amplifier technology is something called Speaker Impedance Detection (SID), which helps to overcome one of the pitfalls of typical class-D designs -- varying output based on the load, particularly in the higher frequencies, which can result in frequency-response imbalances. SID sends a “pulse” to the speakers every time the amp is turned on, which allows it to get feedback from the speakers in order to calibrate itself for consistent output at all frequencies, providing a perfect amplifier-speaker match. 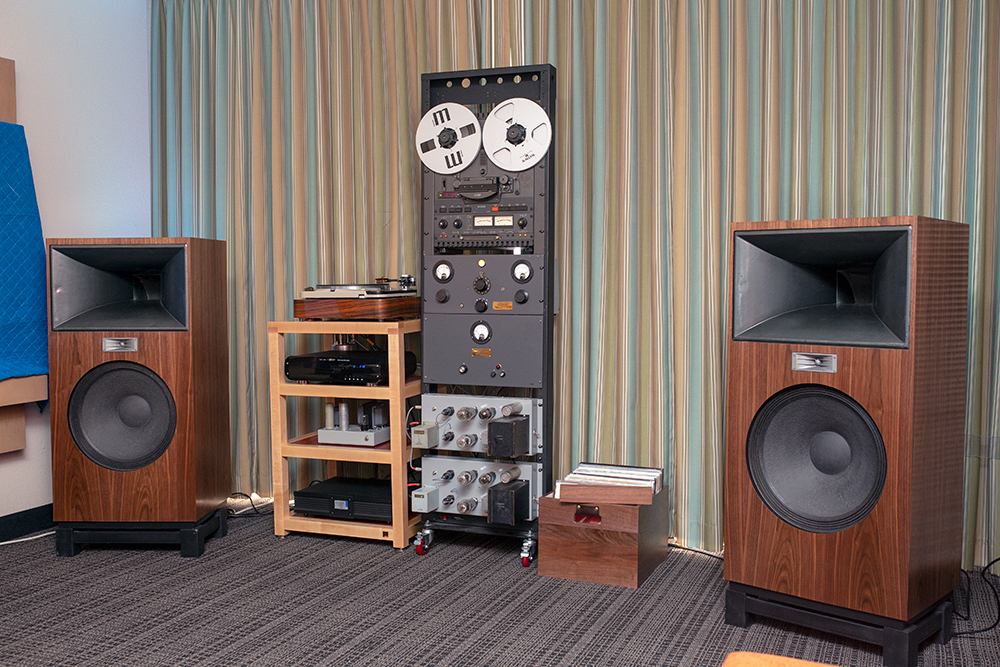 Typically, when I walk into a room with big ol’ retro-looking speakers, I walk out as fast as I walked in, because they usually sound awful. But I wasn’t so quick to exit the Deja Vu Audio room, as the company’s “custom vintage speakers” (I’ll call them CVS for short), priced at $22,400 for the pair, sounded really nice. The company is based in Vienna, Virginia. The CVS is a three-way design with an 18" woofer operating in a sealed enclosure, which the company says plays up to 1kHz; a Western Electric 555 compression midrange driver, which it claims can go as low as 100Hz; and a horn-based supertweeter that operates past 8kHz. Driven by Deja Vu Audio custom tube amplifiers and electronics, the big, boxy speakers sounded kind of big and boxy, but they also had a beguiling smoothness and richness. I’m glad I didn’t run out. 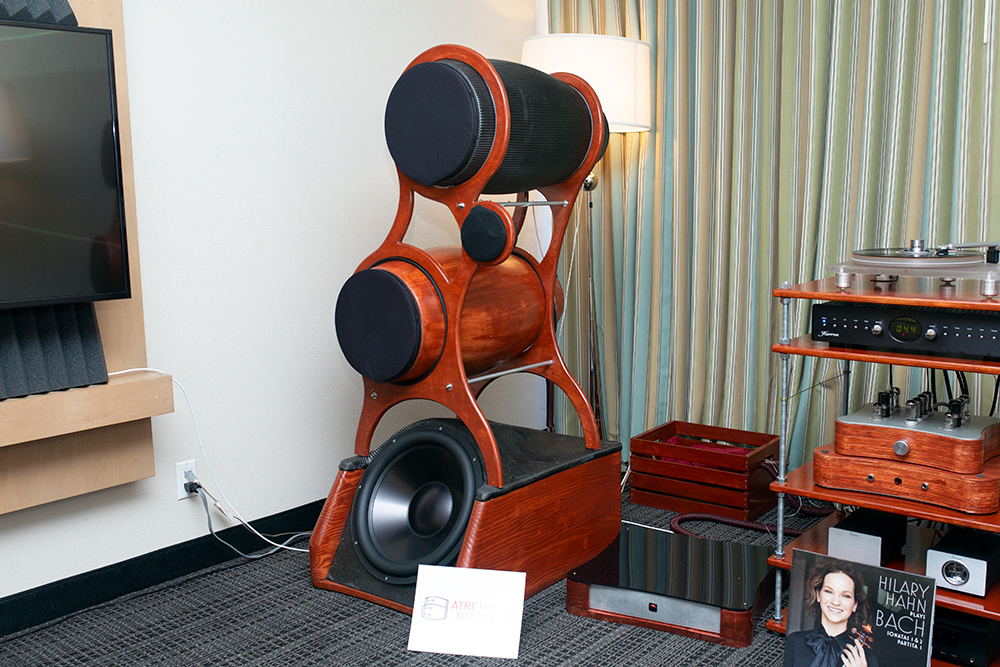 It took me almost five minutes before I could wrap my head around the Atrevit Acoustic Echantriss system on display. Atrevit Acoustic is based in nearby Fort Lauderdale, Florida. At first, I thought the $31,000 price tag was for a pair of odd-shaped, four-driver speakers powered by wide, deep, low-profile amplifiers lying on the floor. If only it were that simple. After wading through the price list and talking to a representative there, I realized that the entire $31,000 system is made up of . . . 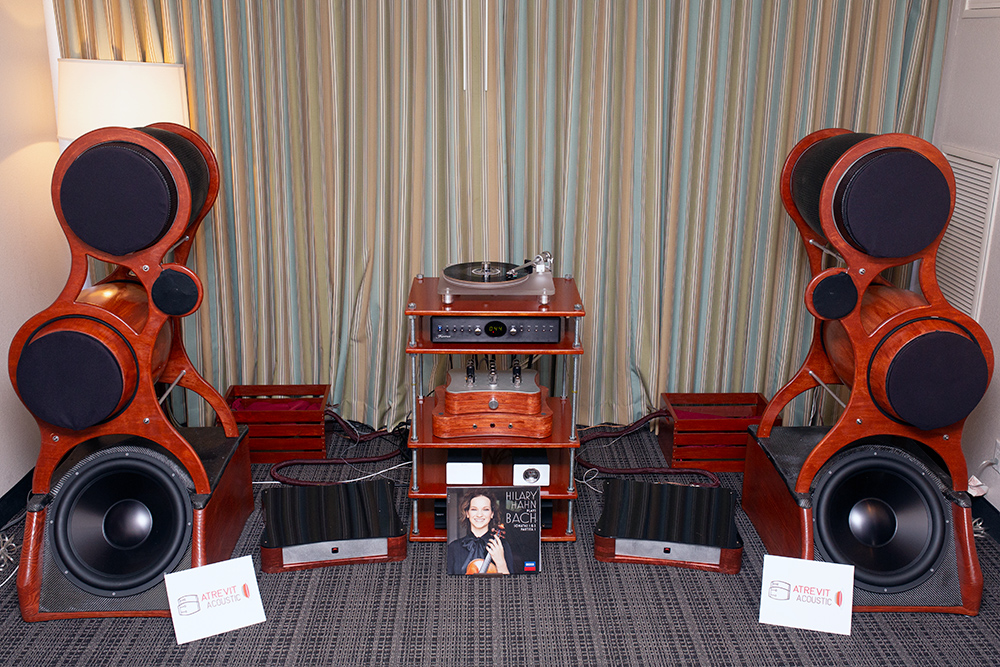 . . . the left and right speakers, the amplifiers beside them on the floor, two external “hybrid active/passive” crossovers placed in crate-like boxes behind, and a tube amplifier that can be seen on the middle shelf on the rack. I didn’t ask, but the cables must be included, though the rep didn’t specifically say that and I couldn’t see anything about that on the price list (I was so deep into trying to understand the rest of the system that I forgot to ask about that part). Nevertheless, I learned that the little tube amplifier is a stereo unit used to power just the tweeters. Each speaker’s subwoofer section has a built-in amplifier, and the wide, deep amplifiers on the floor each provide power for the other drive units. Whew! After finally figuring it out, I had a brief listen and, despite my skepticism about how the drivers on the speakers are arrayed, I found the sound smooth, sweet, and engaging. Maybe there’s something to it all . . .