After the first day at the Florida Audio Expo, I had been through all of the rooms and was fully acquainted with the show’s layout. For the second day, I revisited all of the rooms, but spent more time asking questions and hunting for products I might’ve missed, which was a good thing to do -- I came up with a few surprises. Here’s what I found, with all prices in US dollars.

When I visited the room Parasound was in, I almost overlooked a couple of interesting introductions. After casually glancing around and seeing nothing that looked new or interesting, I was on my way out of the room. But at the last moment I heard someone say, “Can I help you find anything?”

I thought of replying with a no and leaving, but instead I stopped dead in my tracks. I turned around and asked, “Is there anything new?”

To my surprise, I quickly learned that the room contained not one but two new products, both barely visible in the equipment racks. The first was . . . 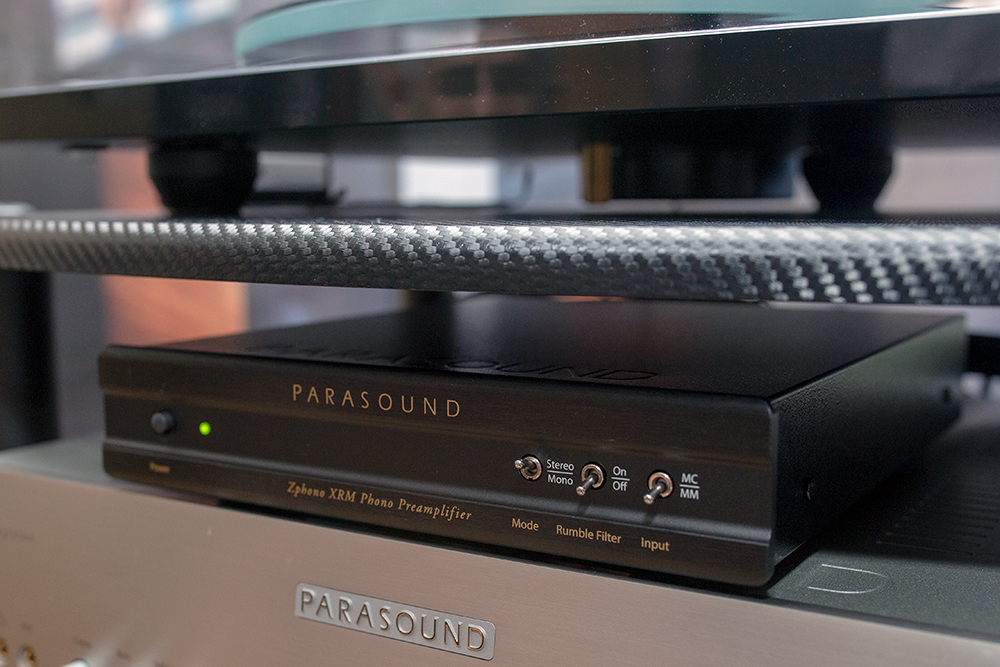 . . . the Zphono XRM phono stage, originally announced in late December 2018. Now shipping and priced at $595, the Zphono XRM slots between the company’s $200 Zphono and $1495 JC 3 Jr. phono stages -- a wise move because that $1295 price spread left a gaping hole in the line. The Zphono XRM supports moving-magnet and moving-coil cartridges on separate inputs (you can hook up two turntables if you like), and has balanced XLR and unbalanced RCA outputs, a rumble filter, and a stereo/mono switch. RIAA accuracy is claimed to be within 0.2dB, and the THD is said to be less than 0.02%. Finally, unlike most entry-level phono preamps, which use generic “wall wart” power supplies, the Zphono XRM has a bespoke linear power supply. The other new Parasound product I encountered was . . . 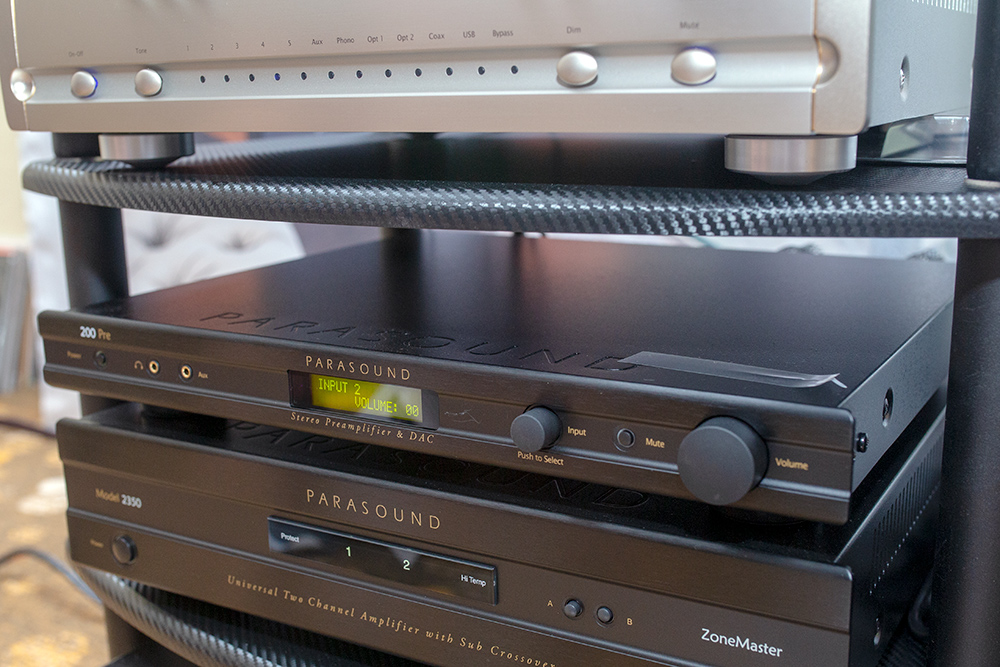 . . . the NewClassic 200 Pre preamplifier-DAC (top component in photo), also announced in December and available now, which has more features than you’d expect for its $895 asking price. To name just some, it has a DAC with USB, optical, and coaxial inputs; a moving-magnet/moving-coil phono stage; two subwoofer outputs (one full-range and one with a fixed 80Hz low-pass filter); analog bass management with a 20-140Hz high-pass filter control; a home-theater bypass mode; and bass, treble, and balance adjustments via the supplied remote. No doubt, Parasound is looking out for budget-minded audiophiles everywhere with these new products. 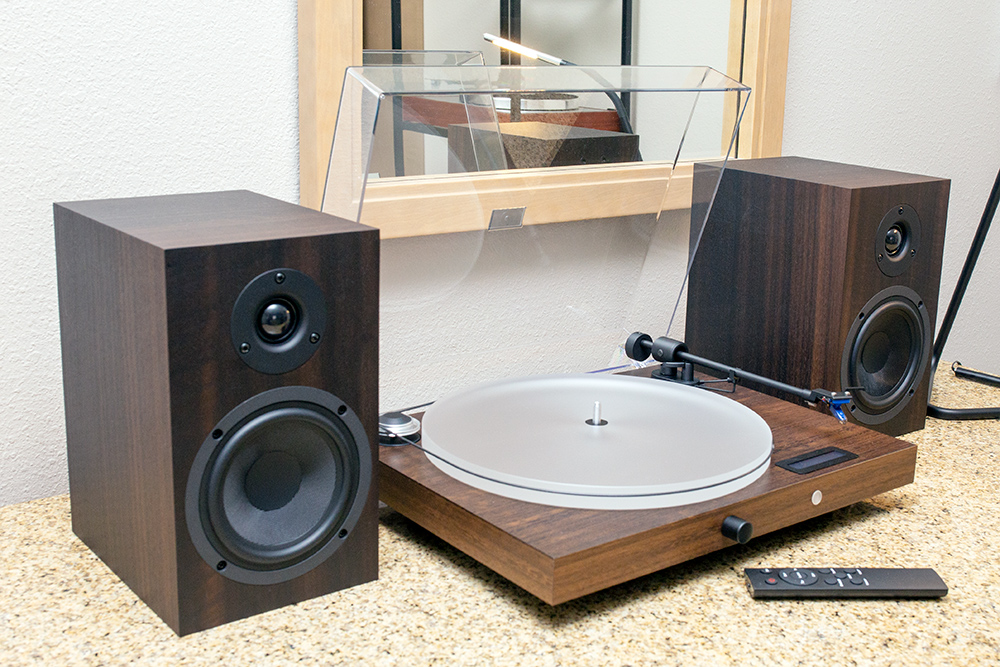 In September 2018, Brent Butterworth reviewed the Pro-Ject Juke Box E turntable-integrated amplifier for SoundStage! Simplifi; the unit costs only $499 for the whole shebang, including the turntable, arm, cartridge, built-in amplification, and even Bluetooth connectivity. Just add speakers. There’s now a Juke Box S2, priced at $849, which improves upon the Juke Box E with better turntable parts, such as an acrylic platter instead of a plywood one, and wood-veneer finishes of Walnut and Eucalyptus rather than the E’s painted ones. Speaking of speakers, also shown in the photo are Pro-Ject Speaker Box 5 S2s, which come in the same wood-veneer finishes as the Juke Box S2, but are also available in Rosewood veneer as well as high-gloss white and black painted finishes. The Speaker Box 5 S2 is priced at $699 per pair and features a 1" silk-dome tweeter with a neodymium magnet and a 5.9" midrange-woofer with a fiberglass cone. 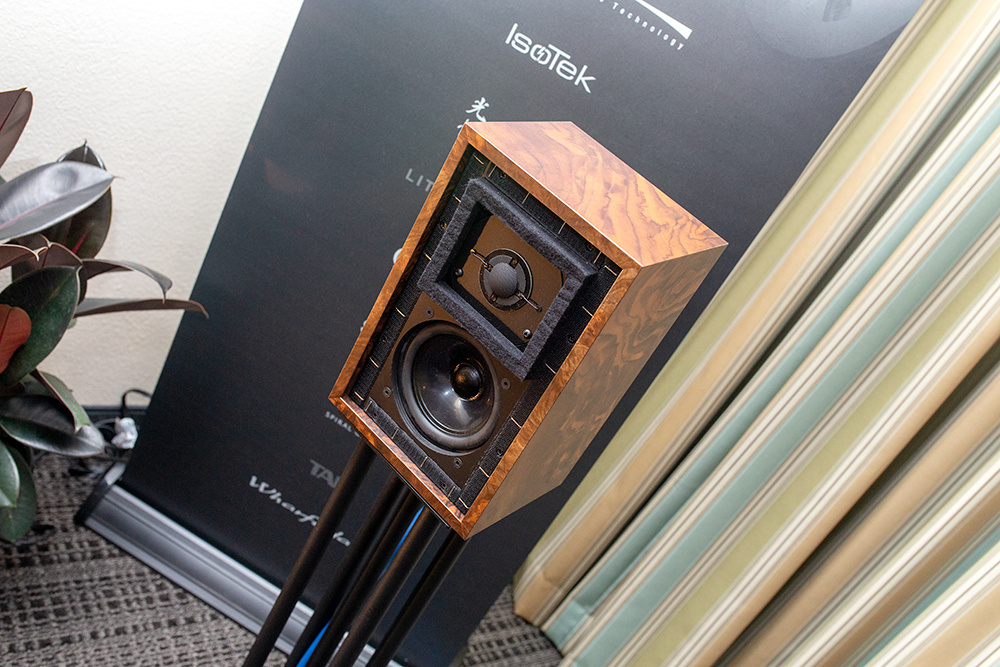 The Falcon Acoustics version of the legendary BBC LS3/5a minimonitor -- a cult classic among audiophiles -- is far from new. I believe it originally came to market in 2015. But at this show I had time to dig deeper, see exactly how it’s made, and hear it in a more comfortable setting. All in all, the pair sounded better than any LS3/5a derivative I’d heard before. And maybe this is why: what I hadn’t realized back when it was announced was just how far the company had gone to replicate the ’70s-era classic, right down to the plywood used for the cabinet and even the staples to hold the Velcro in place to attach the grille. More impressive are the drivers. I didn’t know that Falcon Acoustics’ Malcolm Jones was one of KEF’s original employees and was the person responsible for creating the KEF B110 midrange-woofer and T27 tweeter that were part of the BBC’s spec for this minimonitor, so he knew exactly what to do to create faithful reproductions of those drivers. It also hadn’t clicked before that the original LS3/5a had used Mylar for the tweeter diaphragm -- I’d gotten used to seeing other dome materials in the various iterations of the LS3/5a that have been coming out over the years -- but this one uses historically accurate Mylar. Falcon even uses . . . 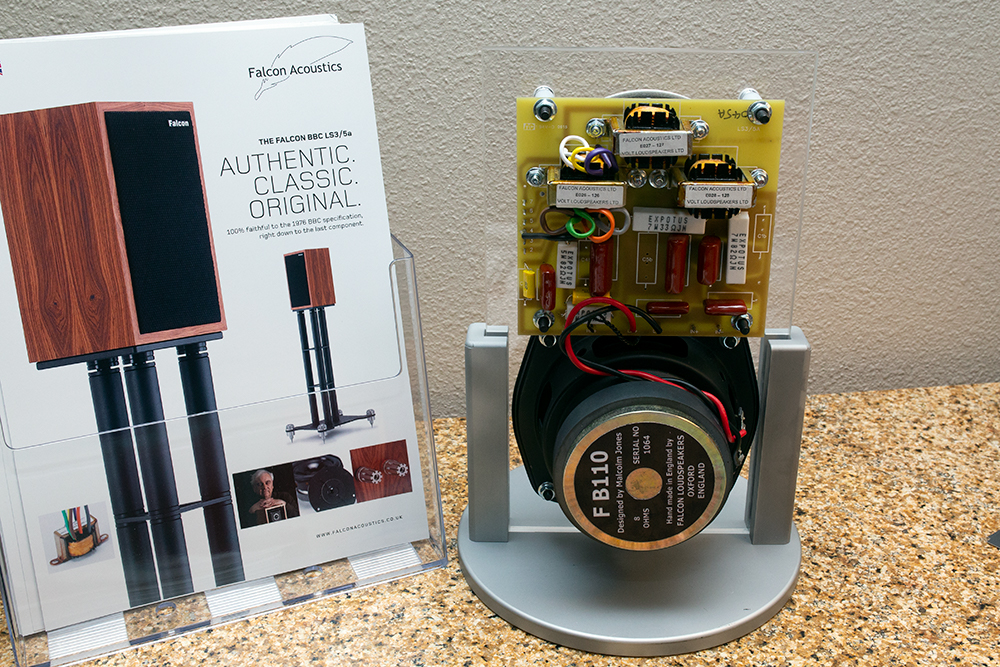 . . . fabric washers with the nuts ’n’ bolts that secure the crossover board, per the original. And the list goes on . . . and on. The one thing that has changed, however, is the price -- this new version is $2995/pair in the standard Cherry and Walnut finishes, $250/pair more for the Rosewood, Burr Walnut (in photos), or Yew finishes. That’s more than ten times the price typically charged in the 1970s, although only a little more than double the price when you account for inflation. It’s expensive for a small speaker, but what you’re also paying for is the work that has gone into painstakingly recreating that original today. That authenticity obviously has tremendous value, because it’s something few, if any, could accomplish the way Falcon has. 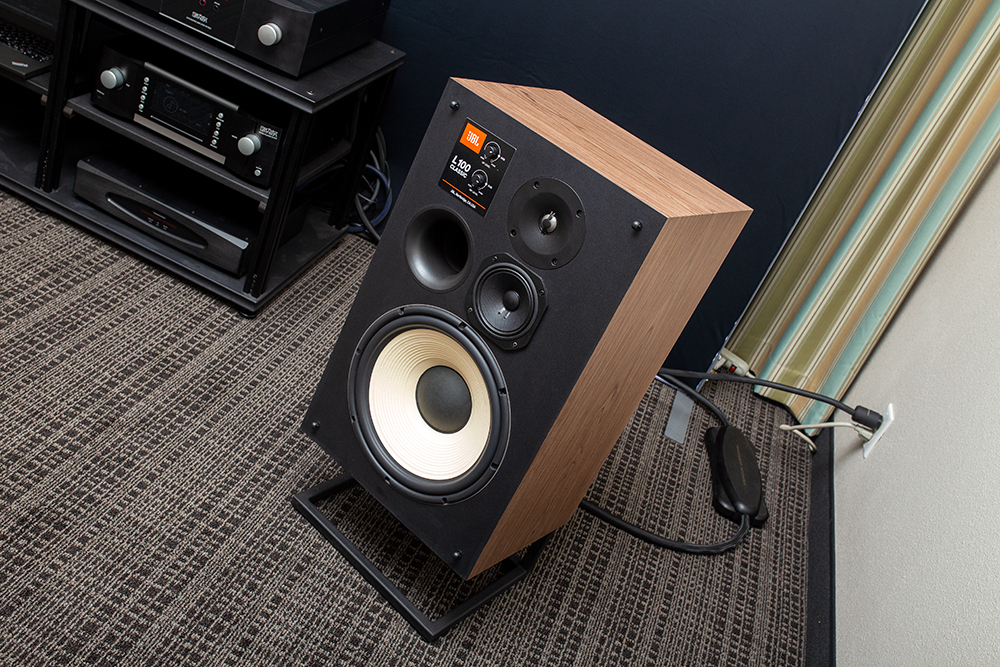 Here’s another recreation of a 1970s speaker classic -- the JBL L100, featured most famously in the “blown away” Maxell ad -- but done a little differently than the Falcon LS3/5a. Introduced back in January 2018 at Las Vegas’s CES and priced at $4000 per pair, the L100 Classic takes overall design cues from the original L100, but updates everything with modern parts and manufacturing techniques, as well as current loudspeaker design knowledge. Housed on the front baffle of its largish 25.06"H x 15.34"W x 14.625"D cabinet are a 1" titanium-dome tweeter, a 5.25" polymer-coated pulp-cone midrange, and a 12" pulp-cone woofer. The speakers are mirror-imaged, meaning that on one, the tweeter and midrange are on the right side, and on the other, they’re reversed. Black-, orange-, and blue-color foam grilles are available. As for the stand, another nod to decades ago -- a short one that angles the speaker upwards. This speaker intrigued me the moment the company announced it. I’ve seen it a few times since it came out, but this show was my first chance to actually listen to it -- and I liked what I heard. Embedded into a system full of . . . 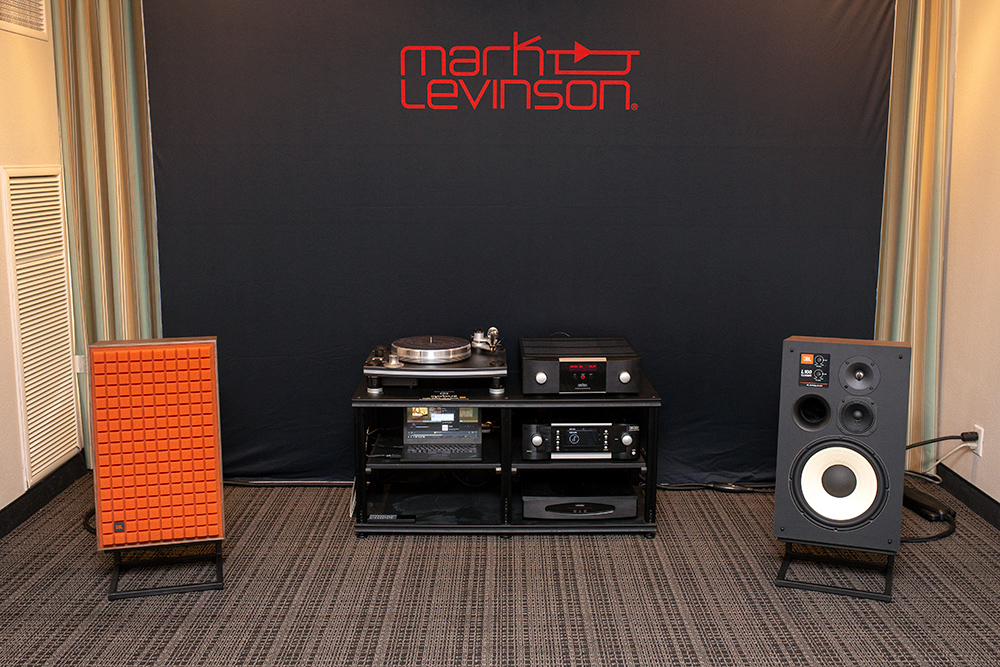 . . . Mark Levinson components (the JBL and Mark Levinson brands are both under the Harman umbrella, which Samsung owns), wired up with Transparent cabling, the sound was very much unlike what I’d heard from vintage L100s. The bass wasn’t particularly deep, but it sounded punchy and powerful, lending good rhythm to the music being played. Expecting to hear a congested, indistinct midband -- if only because that’s what I’ve experienced from the speakers of the past -- I was instead greeted with good overall clarity, as well as an even-sounding tonal balance, so vocals sounded natural. Tweeters of decades ago were rarely pleasing to the ear, but the influences of modern technology really show on this model -- the high frequencies were exceedingly clear and extended. I don’t doubt that if the cabinet weren’t so wide, and with such abrupt edges, the speaker’s performance could be upped some. But then it wouldn’t be an L100, would it? No, it wouldn’t -- and this speaker certainly wouldn’t be as special as it is. As far as I can tell, the JBL engineers have done a fabulous job blending old with new, and I’m sure many audiophiles will covet them. I’d love a pair in my living room.