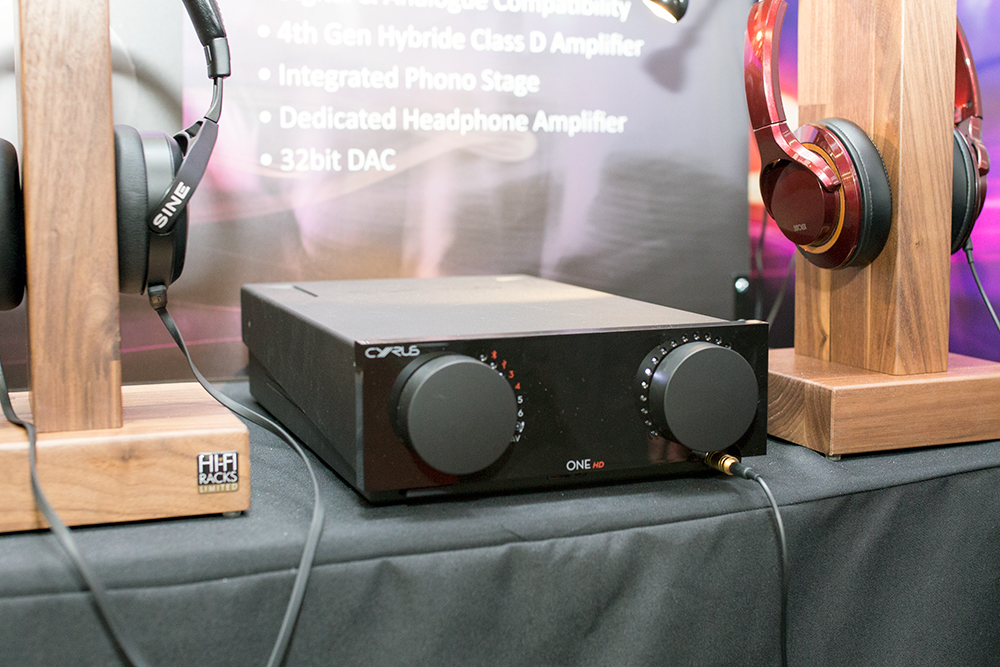 Cyrus Audio, a UK brand that might not be too familiar to North American readers, was showing its new One HD, an updated version of the original One, a model that was introduced a couple of years ago. When the company first introduced the One, I was a little disappointed that it didn’t have any digital inputs (unless you count Bluetooth connectivity). Cyrus has now addressed this with the One HD, which adds USB, S/PDIF coaxial, and TosLink optical digital inputs, and updates Bluetooth to aptX HD. There are also two analog RCA inputs, an MM phono input, and a home-theater bypass. The digital section utilizes an ESS Technology Sabre DAC chip and supports PCM up to 24-bit/192kHz and DSD128.

Even though the One HD has a small form factor, it is said to produce 100Wpc from Cyrus’s fourth-generation, proprietary class-D amplification, which features the company’s automatic Speaker Impedance Detection (SID) system. I thoroughly enjoyed the sound of the Cyrus Stereo 200 power amplifier that I reviewed a few years ago, which utilized SID and a previous generation of Cyrus’s class-D technology. While it’s not as powerful as the Stereo 200, the One HD’s 100Wpc (8 ohms) is a lot of power for an entry-level integrated. Another unique feature of the One HD is that when it’s connected to headphones, the toroidal transformer is switched to power just the headphone section, resulting in huge power reserves available to the headphone output. 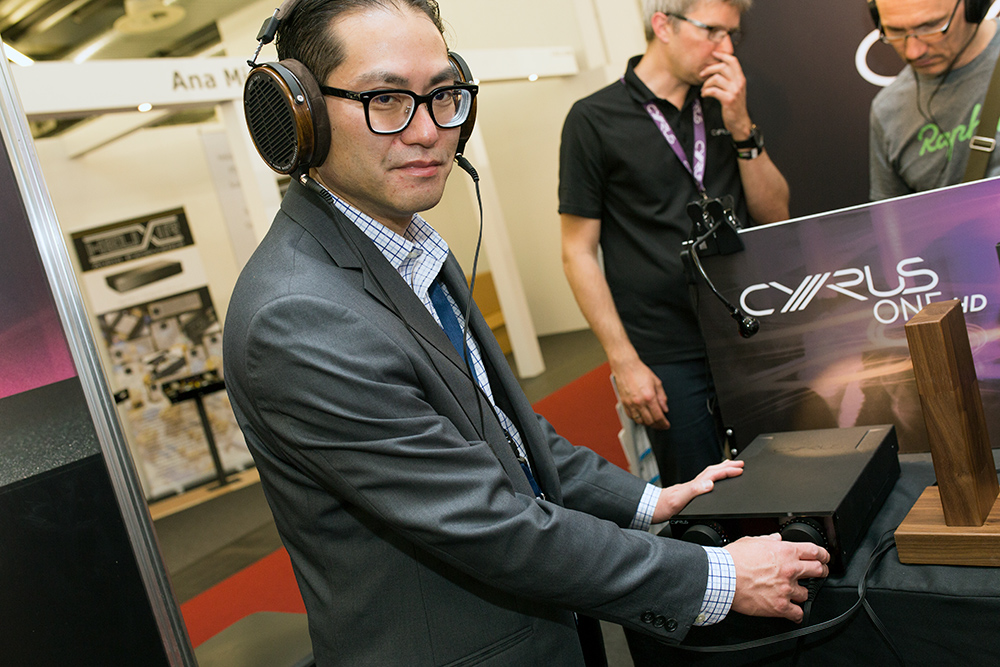 At a price of £999 (about $1350), the Cyrus One HD would make a fabulous centerpiece for a high-performance budget system when connected to a pair of high-value bookshelf or small floorstanding speakers, or even your favorite set of headphones and a computer or some other cost-effective source component. 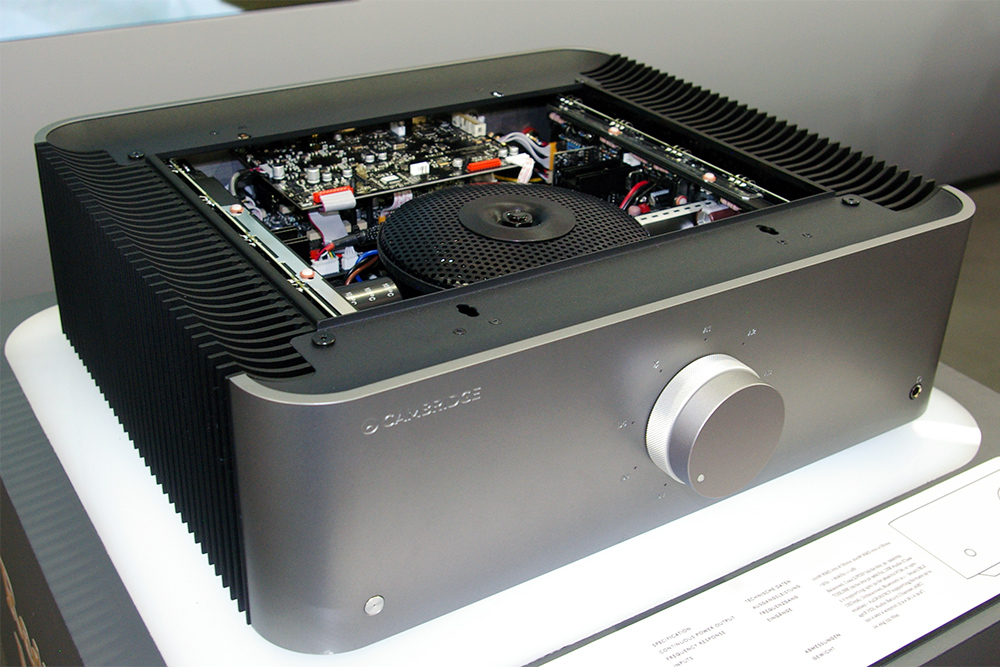 Probably the coolest looking components that I saw at this year’s High End show were the Edge-series electronics from Cambridge Audio, also of the UK. With industrial design that SoundStage! Network publisher Doug Schneider described as “gorgeous,” these massively built components look to redefine value in entry-level high-end audio. The line consists of the Edge A integrated amplifier, Edge NQ preamplifier with network player, and Edge W power amplifier. Priced at €5000 (or $5000), with its large centrally mounted control knob, thick curved faceplate, and purposeful black heatsinks, the Edge A integrated oozes quality. 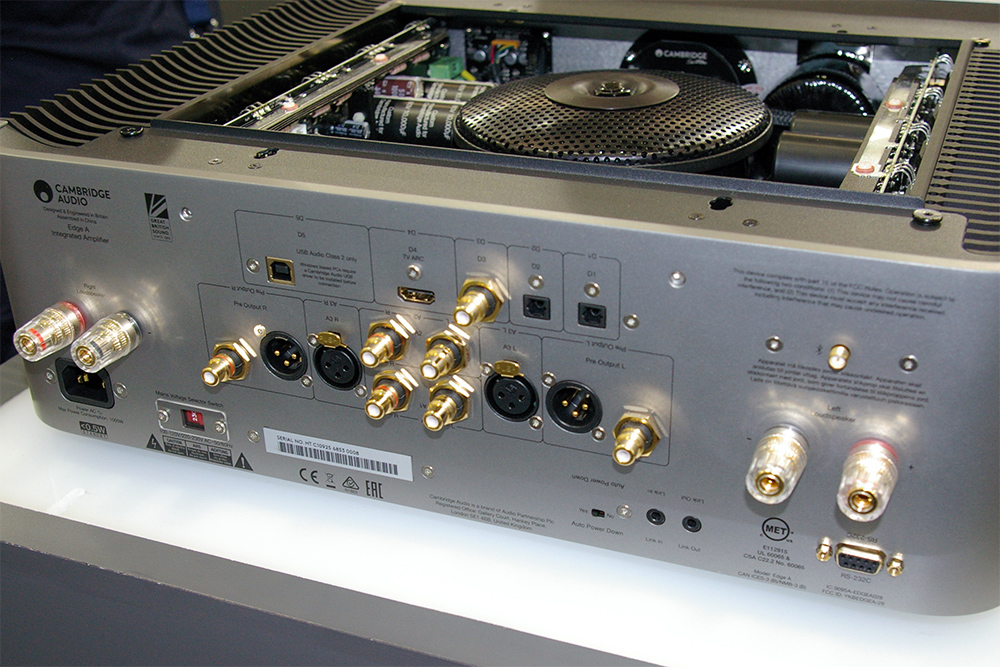 It, too, is rated to output 100Wpc into 8 ohms, but also doubles down to 200Wpc into 4-ohm loads, meaning it should power most loudspeakers. The interior is jam-packed with neatly laid-out circuit boards, and it features dual stacked transformers with opposing symmetry to lessen hum and reduce stray magnetic fields. Naturally, it has all the typical digital and analog inputs you would need, including Audio Return Channel (ARC) on HDMI to get sound from your TV, and Bluetooth aptX HD. Looking at the high-quality connectors, the tidy layout of the back panel, and the overall build quality of the Edge A integrated amplifier, I can say this is one product I would absolutely love to have in my reference system.