One company I've grown to admire over the last couple of years is Hegel Music Systems of Norway. But they've been around for much longer than the time I've known them -- Hegel has been making good-sounding, nicely styled, well-built hi-fi products that are reasonably priced for over 20 years. Their current line includes integrated amplifiers, power amplifiers, preamplifiers, CD players, and DACs. I reviewed the Hegel HD10 DAC on SoundStage! Hi-Fi in September and I was very taken by its performance, resulting in a strong recommendation, not only because of how well it played music but also because of its low price: $1200. 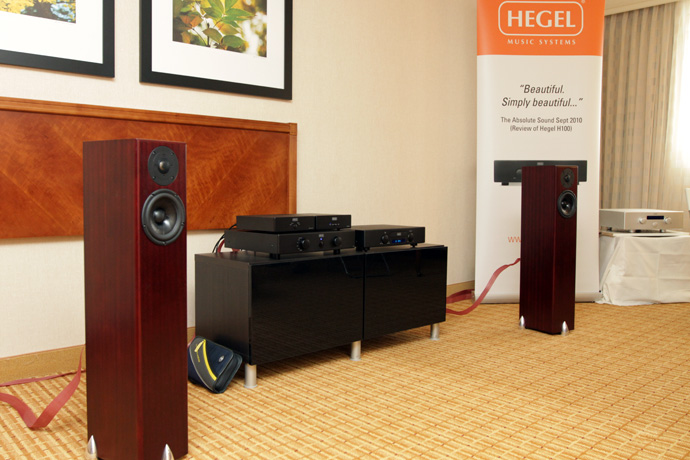 But the HD10 is no more. At RMAF 2011, Hegel showed its replacement, the HD11, which is more feature-rich than the HD10. Whereas the HD10 could only support up to 16-bit/48kHz resolution via USB, the HD11 supports up to 24-bit/96kHz resolution (both models support up to 24-bit/192kHz resolution through their S/PDIF and TosLink inputs). The HD11 comes with a remote control, while the HD10 doesn't have one at all. Finally, the HD11 has a new 32-bit internal DAC chip from Texas Instruments that they say performs better than the 24-bit Analog Devices chip in the HD10, which was proven through performance. Hegel displayed . . . 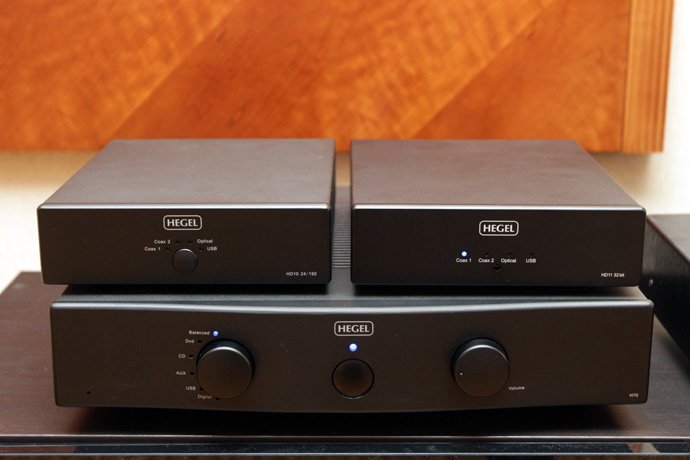 . . . both DACs in a way that allowed for an A/B comparison (the HD10 is on the top left, the HD11 top right). The HD10 still sounded excellent, but the HD11 sounded even livelier and cleaner, and had better low-level resolution. All told, there's no question that the HD11 is the better DAC.

What impressed me most, though, is the HD11's price. The new HD11 sells for the same amount as the HD10, which I think is commendable. After all, in most instances when a company changes a product to a new version, they also jack up the price, if even by a little bit. In fact, some companies come up with new versions just to justify an increase in price. But Hegel doesn't seem to work that way -- they went from the 10 to the 11 for no increase in price. Chalk another up for Hegel, as this is just one more reason I admire this company so much. Obviously, seek out the HD11 if you're in the market for a new DAC.