When I walked into the SV Sound (SVS) room and saw their new Ultra-series speakers, comprising a floorstander, monitor, center-channel, and surround, I admit to first thinking, "Are the attractive, sloped, shiny-black cabinets simply acting as pretty faces to conceal that there's little in terms of true design work behind them?" Plus, the prices seemed too good to be true -- the Ultra Tower will retail for about $2000/pair, the Ultra Bookshelf about $1000/pair. In high-end audio, that's cheap -- and cheap sometimes correlates with no time spent engineering anything at all. 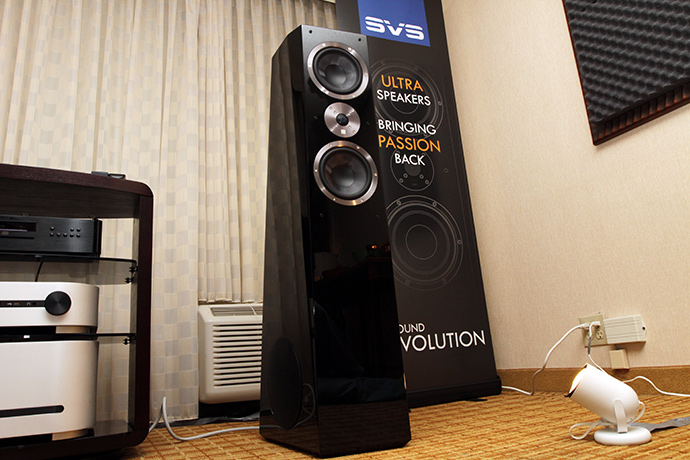 When I turned to ask questions about the speakers, though, I saw a familiar face ready to unleash the answers, and my fears diminished substantially. SVS's lead designer is Mark Mason, who cut his teeth for years at PSB Speakers under the tutelage of Paul Barton, arguably the worldwide champion when it comes to highly engineered, high-value loudspeaker designs.

With Mark closely listening, I zeroed in on the Ultra Tower, poking, prodding, and asking pointed questions to find out what exactly it's about and if there's substance behind it. First I asked about what looked liked a simple midrange-tweeter-midrange configuration on the front baffle, which is a driver setup I don't typically like because of the lobing issues that usually result from having two midranges reproduce the same frequencies. Mark clarified that it's not an MTM; instead, it's only the topmost driver that hands off to the tweeter, likely at around 2kHz, while the lower one shelves off at about 900Hz. When you throw the woofers into the mix, that makes the Tower a three-and-a-half-way design versus a three-way one, which is what most will think the Tower is unless they ask. 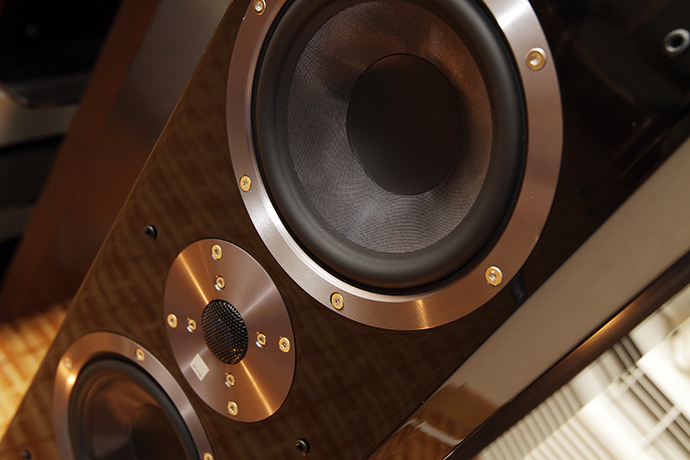 Then I asked about the side-mounted woofers, which, if executed incorrectly, can cause certain issues, but can have tremendous benefits if implemented properly. Mark's rationale for the duo per speaker was spot on -- mounting them on opposing sides results in a "reaction canceling" effect, meaning less cabinet vibration from the woofers (the same reason Vivid Audio does it in their cost-no-object designs, which I feel to be the very best speakers in the world, as does KEF in the Blade, another world-class design). Using multiple woofers also allows for more even bass-loading in the room (the same concept applies to using multiple subs), as well as greater output than a single woofer can provide.

Then it was Mark, not me, who brought up distortion, which is usually the Achilles' heel of low-priced loudspeakers, mainly because of cost constraints with the drivers. Mark's well-versed with the facilities at Canada's National Research Council (NRC), which is where Paul Barton has designed his speakers for decades, and is where Mark is now designing for SVS. It's also the place where we do our measurements. Mark simply dared me to run the distortion test at 95dB, which is punishing to many designs. He said that from about 100Hz up, we should basically see no distortion at all. When asked why he felt so confident, he simply said, "The drivers are really good." 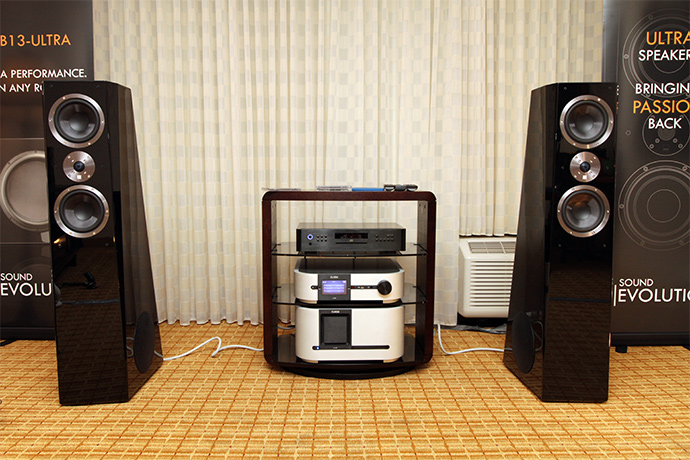 But enough about what the designer had to say. I listened to the Ultra Towers and was blown away by the way they sounded -- rich, detailed, exceedingly clean, particularly through the midrange, and notably extended in the bass. The Tower is fairly large, but it still sounded quite a bit bigger than what the cabinet suggested, quite likely due to the full, deep bass it could produce and the spaciousness of its sound. It also sounded like a speaker that should retail for a much higher price -- but it's still too early to say much more than that because, after all, this was nothing more than a quick listen at a show.

Looks can be deceiving -- you can't simply assume that any loudspeaker, whatever its price, is a competent design, no matter what its appearance might be. You also can't believe every loudspeaker story, or sometimes even what the designers have to say -- particularly if it's a far-fetched tale they're trying to tell/sell. But the story behind SVS's new speakers seemed plausible and their designer is, based on my past experiences with him, credible. The speakers' prices are also incredibly low, which makes the line more appealing.

I won't go out on a limb and say that SVS's new Ultra Tower or any of the other speakers in the line are giant killers just yet, but I will say that the promise is there and the speaker line is now on our radar -- and it should be on yours if you're shopping for something in this price range. So we've already requested Ultra Tower review samples, which SVS agreed to send out when the products are released next month. Stay tuned to the SoundStage! Network to find out if SVS's new Tower is a bust or a breakthrough.