CanJam SoCal 2019, which ran June 22 and 23 at the Irvine Marriott in Irvine, California, featured not only lots of headphones and earphones, but also a whole bunch of new amplifiers -- as well as the debut of a couple of surprising and stunning new audio electronics we didn’t expect. Here’s what we saw and heard, with all prices in USD. 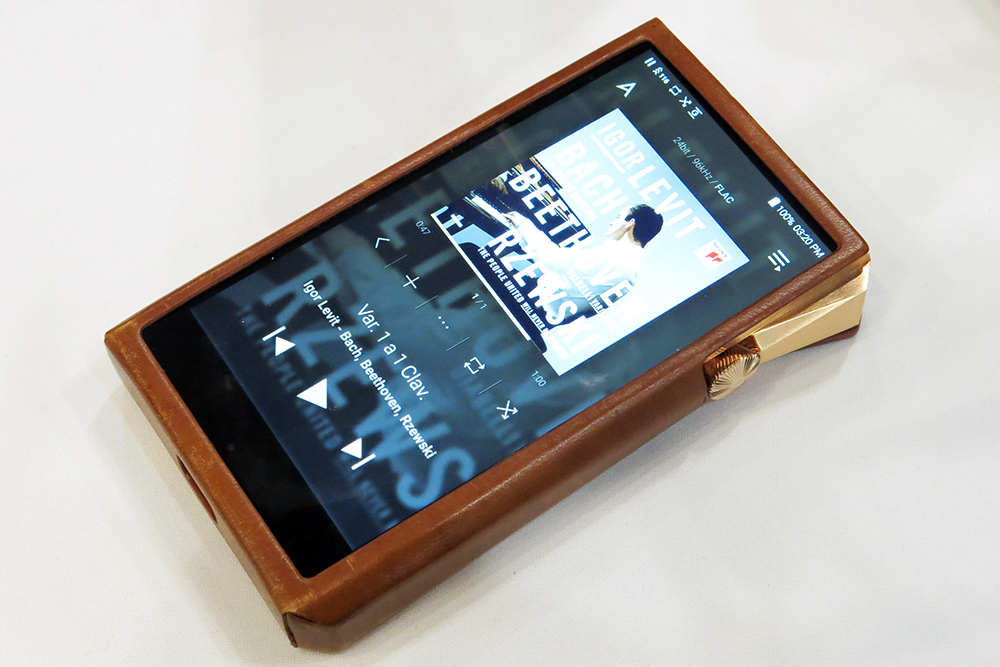 Astell&Kern’s new flagship music player, the SP2000 ($3499), is surely the state of the art in pocketable sound. It’s said to have better detail and dynamics than the previous model, the SP1000, and it delivers 50% more power into balanced headphones and 25% more power into unbalanced headphones. Considering that the power on the balanced output is rated at 6V RMS, that translates to 1.125W into 32 ohms. The chassis is machined from a single, solid billet of aluminum or copper, and the case serves as a massive ground for lower noise. It’s shown in its optional brown leather cover; a black cover is standard. 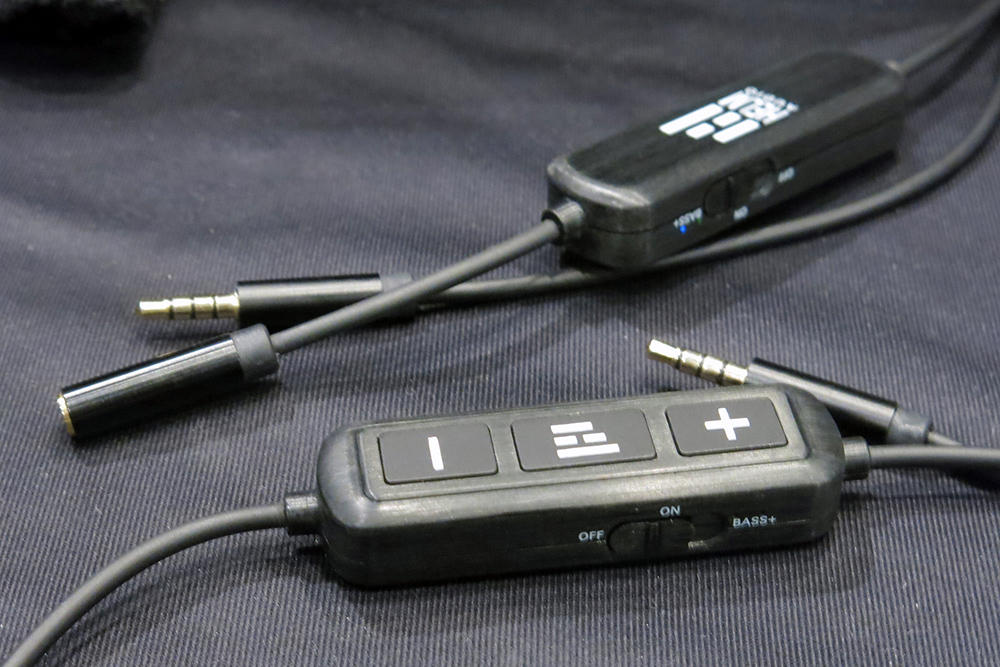 The Helm Boost Cable ($99.99) is designed for driving demanding headphones and earphones that need a little more juice than a smartphone can provide. The cable version (foreground) is designed primarily as an active replacement cable for the Helm Studio Planar headphones, while the adapter version (background) has a 3.5mm inline output jack that lets it work with any wired headphones. 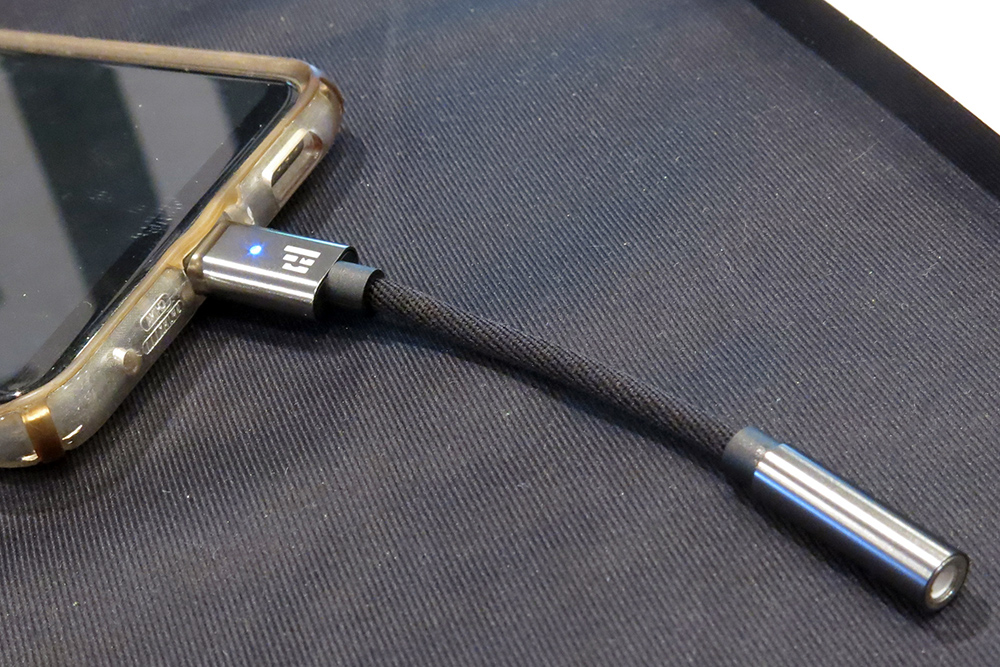 Even those who are only barely MQA-curious will have a hard time resisting the Helm MQA Adapter ($99), which costs less than a typical pair of audiophile interconnect cables. It’s like an MQA-compatible version of the dongle Apple offers for its latest phones, except that it’s purely a DAC, with a line-level output that’s not intended for driving headphones. Its USB-C plug slips into most new laptops and Android phones, and its 3.5mm output connects to a preamp or headphone amp. 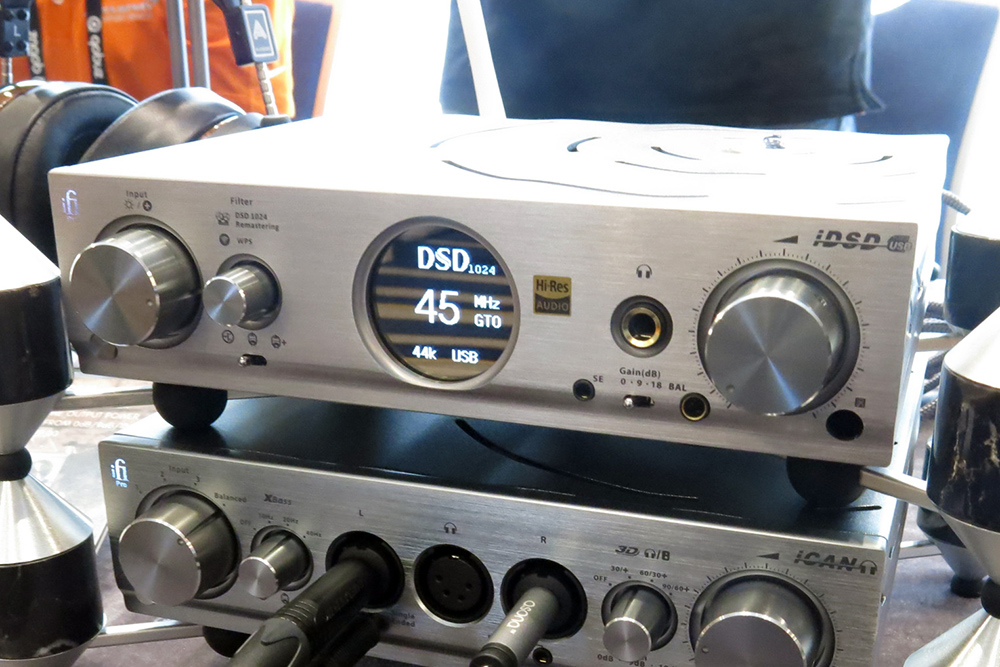 The iFi Pro iDSD 4.4 ($2499, shown at top) is probably all the electronics any headphone enthusiast needs. Obviously it has a headphone output, but it’s also a DAC and a streamer. It streams wirelessly from online sources such as Tidal and Spotify, and also includes AirPlay. The DAC can upsample to ultra-high-res DSD1024, and it lets you select from five different digital filters. You can run it in tube or solid-state mode. Below right from the usual 1/4" (6.3mm) unbalanced output jack is a mini balanced output, available in your choice of 4.4mm or 2.5mm sizes. 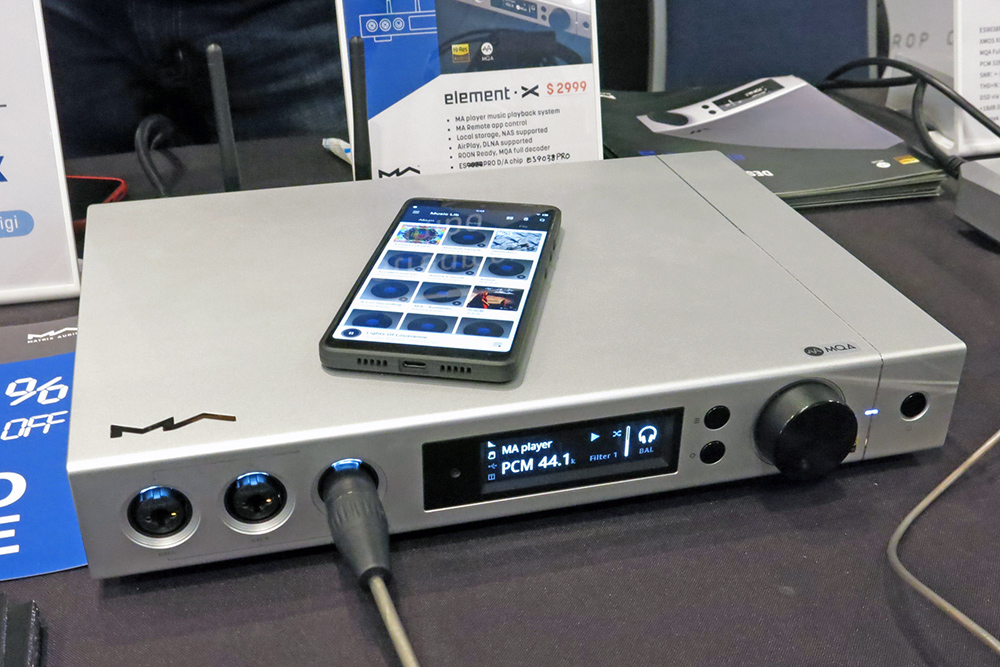 Matrix Audio was one of many manufacturers -- most of them relatively unknown in North America -- exhibiting at the Shenzhen Audio table. Its new Element X ($2999) combines a high-end balanced headphone amp with a digital streamer controlled through a smartphone app. (An Android app is currently available, and an iOS app is under development.) The Element X is packed with all the latest streaming tech, including MQA, Roon, AirPlay, and DLNA, and it can be used as a preamp, driving a power amp or a set of powered speakers. 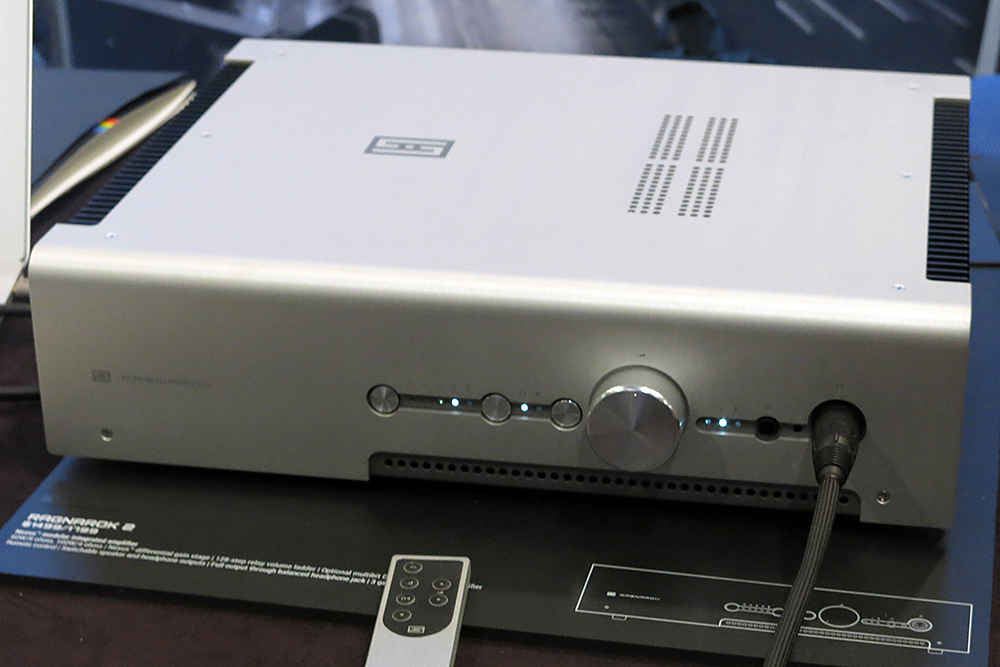 The Schiit Ragnarok 2 is technically an integrated amp, but its internal amplifier, rated at 60Wpc into 8 ohms, also drives its headphone jack directly, resulting in a whopping 24Wpc into 32 ohms. (This is the arrangement found in many classic stereo receivers, which often don’t have a separate headphone amp section.) So according to Schiit Audio, it’s great for hard-to-drive headphones, but the noise might be a little too high for driving sensitive earphones. Price is $1499 for just the integrated amp, and $1799 for the amp with a USB DAC and moving-magnet phono preamp built in. 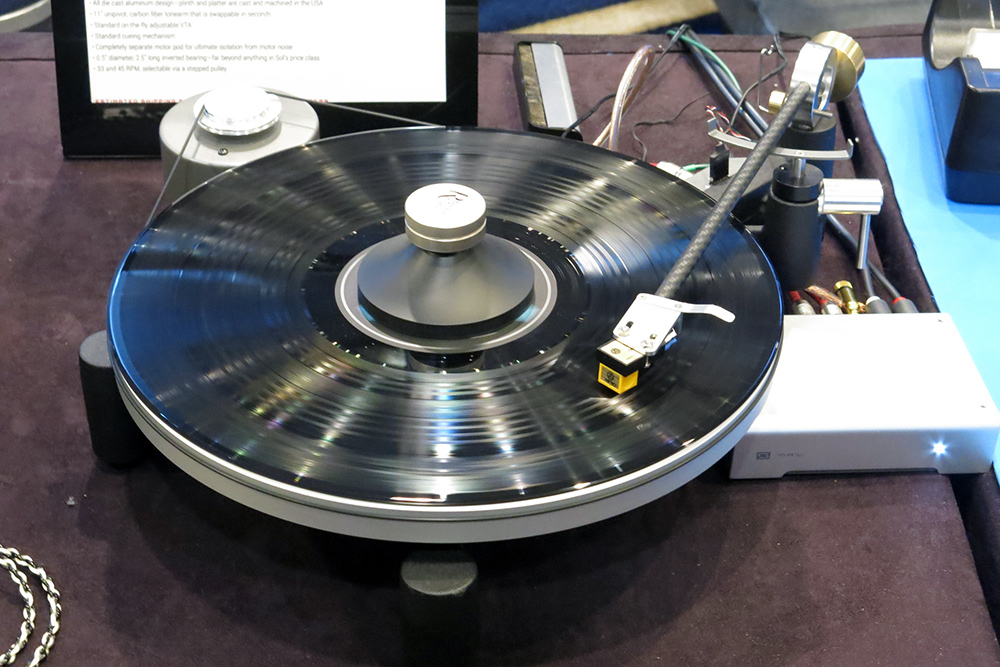 Schiit Audio seems to come up with a big surprise every year -- like the compact Loki equalizer and the affordable, efficient Vidar power amp. But the new Sol turntable might be its biggest surprise yet. The plinth and platter are both made from aluminum, cast and machined in the US, and the 11" carbon-fiber tonearm is designed so it can be easily swapped out with other tonearms. Vertical tracking angle is adjustable on the fly, and the motor is physically isolated from the rest of the turntable. Expect a price under $700. 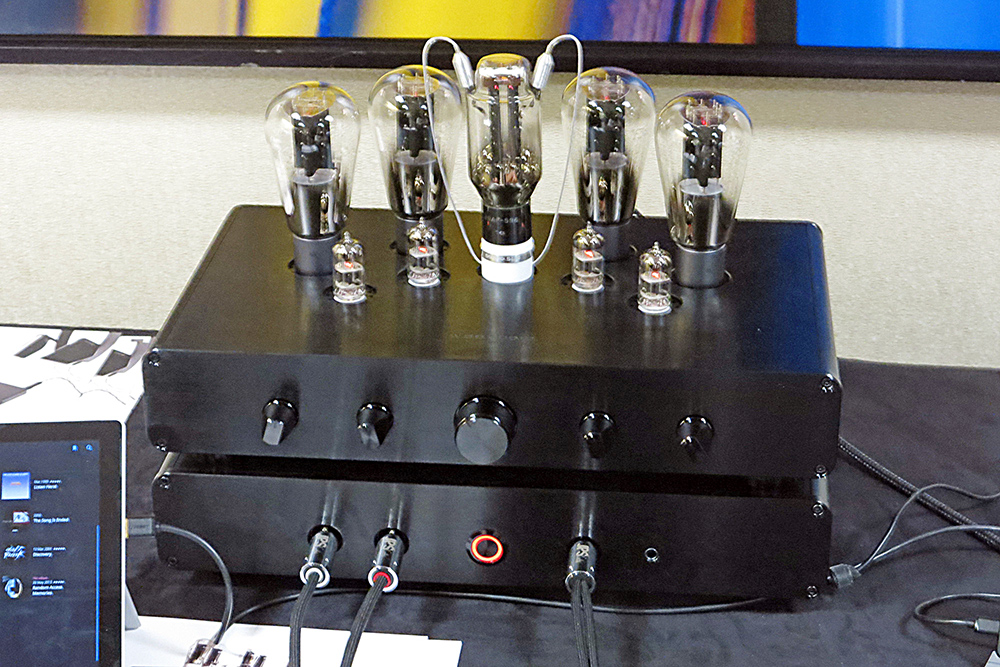 At $7999, Woo Audio’s WA33 is among the highest-priced headphone amps you can find. The two-chassis design doubles as a tube preamp. Four 2A3 tubes provide the power for the fully balanced design. The center tube is a 5U4G rectifier for the power supply. Included are 1/4" (6.3mm) unbalanced, four-pin XLR balanced, and dual three-pin XLR balanced headphone outputs, along with XLR line-level outputs for using the WA33 as a preamp. 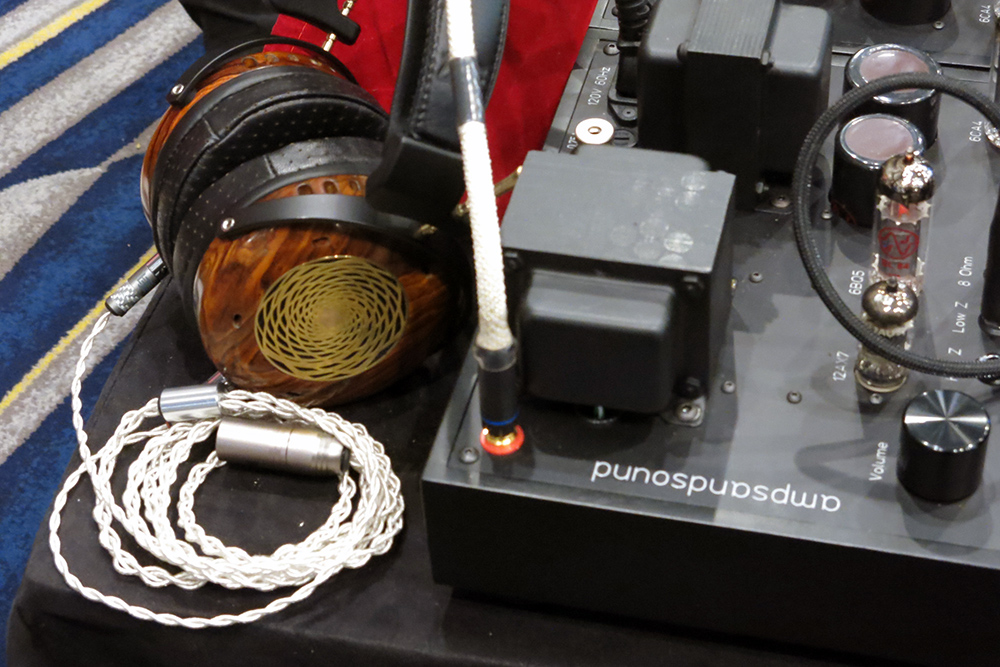 ZMF Headphones didn’t have any new headphones on display, but it did have a new high-end cable: the Verity Silver, which has 120 strands of 0.05mm silver surrounding 113 copper strands. Price is $399 for a 4.5' cable, and longer lengths are available at higher cost. The Verity Silver is shown alongside one of Ampsandsound’s Leeloo monoblock headphone amps ($5500 per pair), each of which packs a 12AX7 driver tube, an EL84 power tube, and a 6CA4 rectifier tube. Depending on which tap you use, it puts out 1.5 to 3.5W into headphones, and it can also put out 3.5W into an 8-ohm speaker.