CDs and even SACDs are still big in Japan -- and so are records. Japanese audiophiles still love physical media for music playback. As a result, it’s not surprising to see new CD and SACD players at the Tokyo International Audio Show (TIAS) 2019, like the ones I covered from Luxman, as well as turntables and related products, which are featured below. All prices are in Japanese yen (¥), with one US dollar equivalent to 108.62 yen. 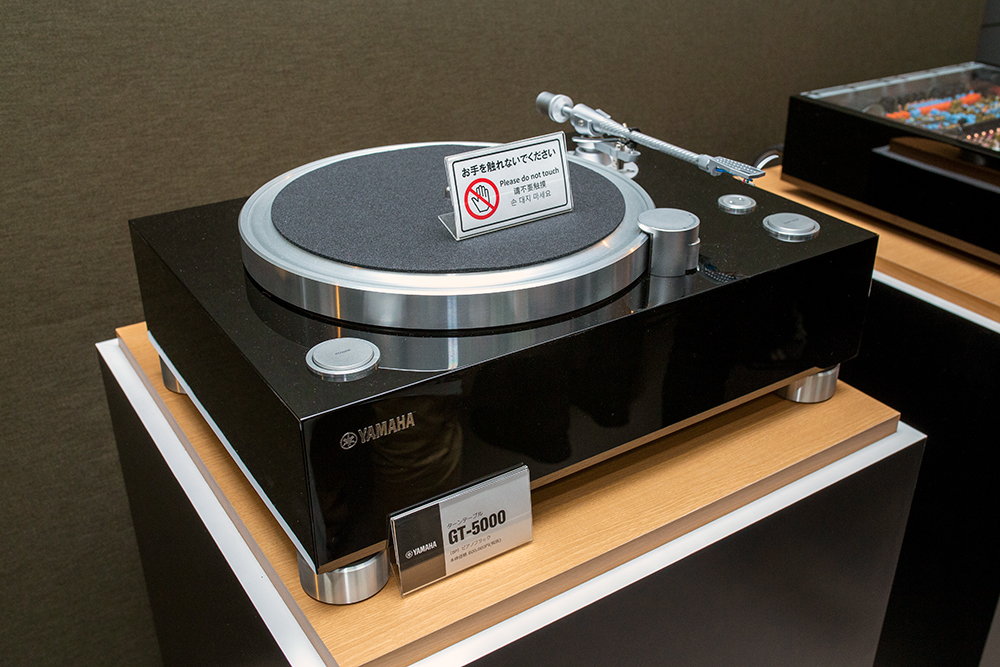 I’d seen the high-gloss black version of Yamaha’s GT-5000 turntable at several hi-fi shows around the world since it was first released in 2018, but I’d never seen the . . . 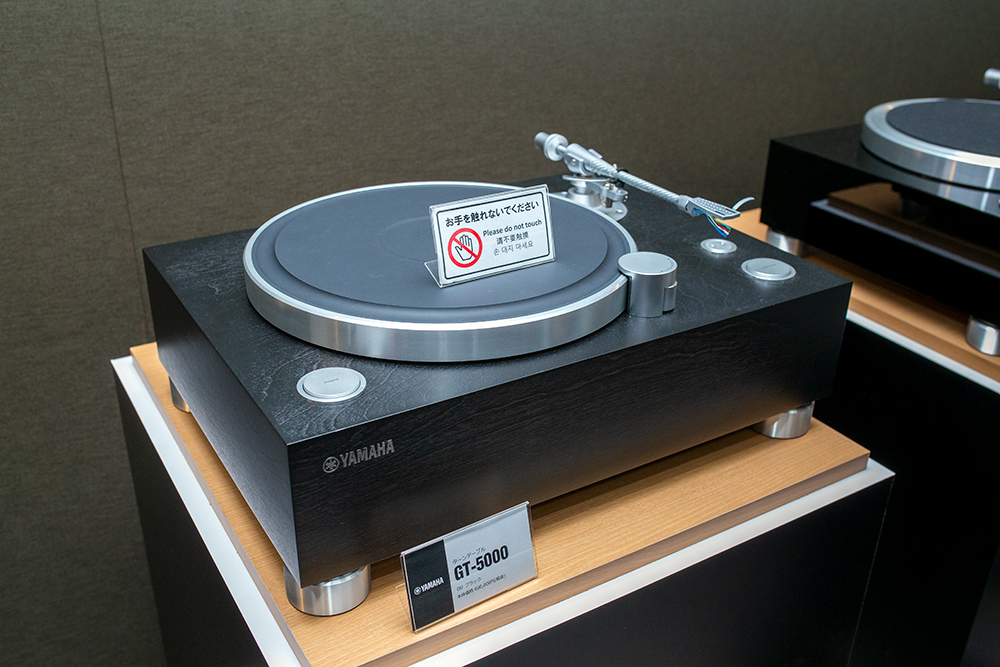 . . . woodgrain version until TIAS 2019. Looking around online and finding no mention of it anywhere, I’m led to believe that others missed the wood one as well -- or that this version is for the Japan market only, which is why none of us saw it. From what I could tell, everything about the two turntables is the same -- the ’table itself, plus the tonearm it comes with -- except for the finish and the price. The high-gloss version sells for ¥800,000, while the matte wood one goes for ¥600,000. A ¥200,000 savings equates to about $1800 in the US -- substantial enough to affect which one someone might choose. 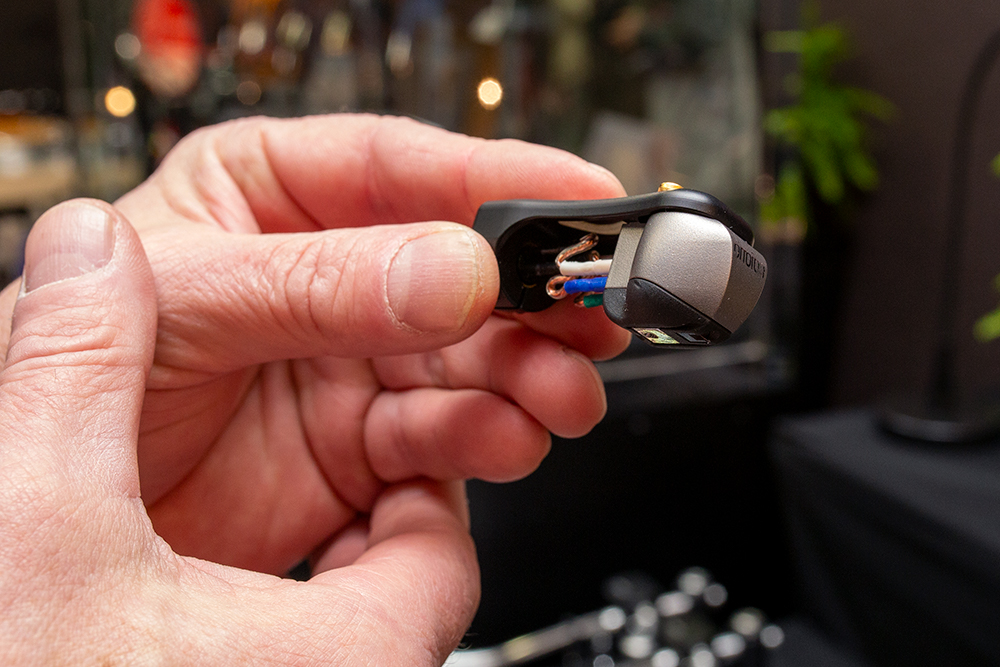 Leif Johannsen is super-enthusiastic about hi-fi -- and even more enthusiastic about the cartridges the company he works for makes. As the chief officer of acoustics and research for Ortofon, which is a 101-year-old Denmark-based firm (it was founded in Copenhagen in 1918), he told me he oversees every product the company makes. He also told me that he won’t OK a product unless he’d actually want to buy it himself. Ortofon may be more than a century old, but the company hasn’t lost the personal touch. As a result, Johannsen was thrilled to show . . . 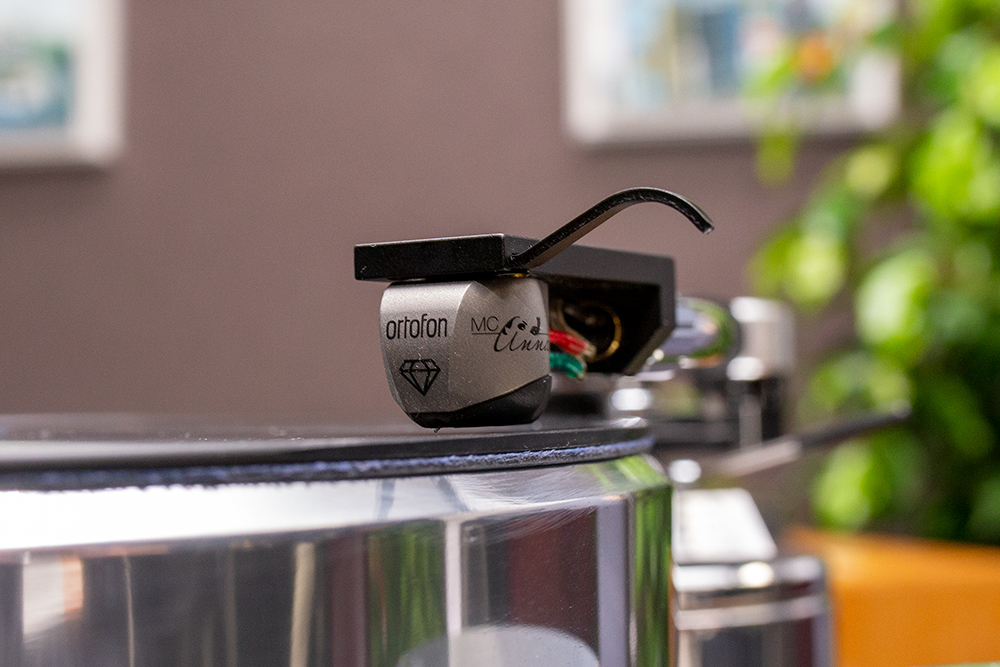 . . . and then play the new MC Anna Diamond cartridge, Ortofon’s new flagship design. Priced at a hefty ¥1,080,000, the MC Anna Diamond is a moving-coil cartridge that, per the name, has a diamond cantilever (the standard MC Anna has a boron one) and an Ortofon Replicant 100 diamond stylus. The housing and body of the MC Anna Diamond are titanium, made using selective laser melting (SLM), which, according to Wikipedia, “is a rapid prototyping, 3D printing, or additive manufacturing (AM) technique designed to use a high power-density laser to melt and fuse metallic powders together.” 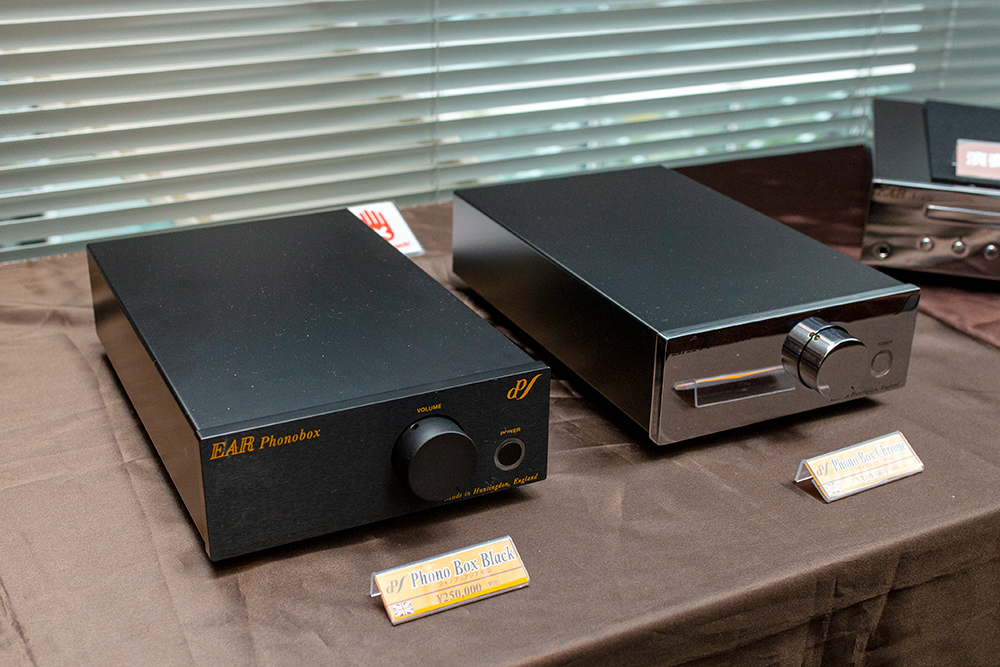 A more affordable phono-based product is the EAR Phonobox phono stage, which sells for ¥250,000 with a black faceplate or ¥340,000 with a chromed one. EAR, a UK-based firm, was founded by Tim de Paravicini, still the company’s chief designer and a man who’s now revered worldwide for his knowledge of tube-based circuit design. Not surprisingly, the Phonobox has tubes inside -- three of them -- that de Paravicini told me are proprietary to this design. He calls the tube type used a 13D16, though that’s a name he said he came up with. If you want to tube roll, however, you can substitute the 13D16s for 12AX7s. But if you do, you have to change all three -- you can’t mix ’n’ match. The Phonobox supports . . . 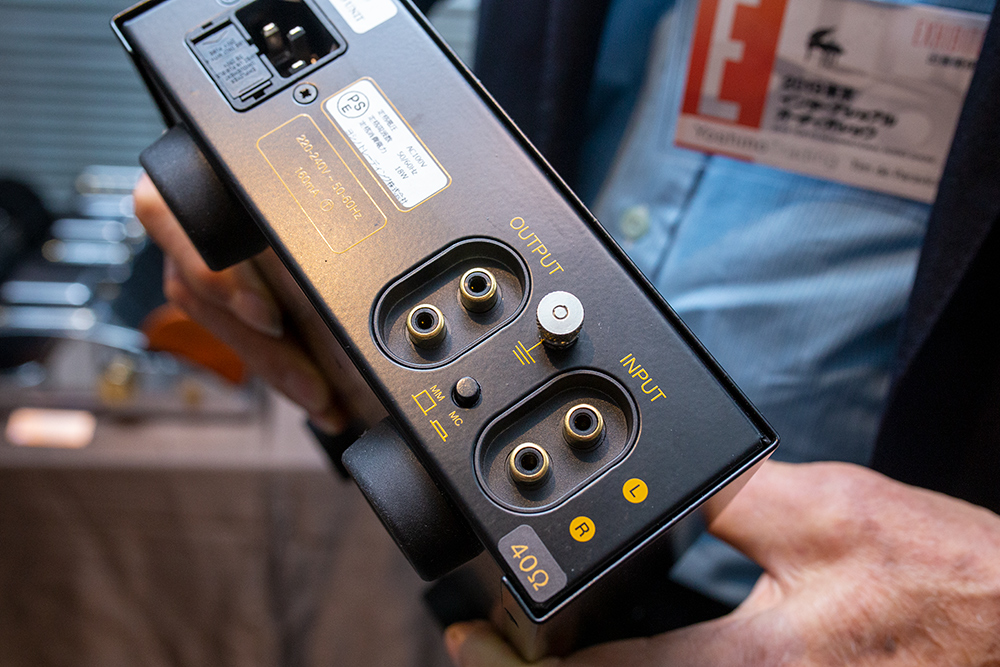 . . . moving-magnet and moving-coil cartridges via a switch on the backside, and it’s available with fixed gain or variable gain for the same price. Tim de Paravicini told me he designed the Phonobox to drive a power amplifier directly, so he wanted to give people the option of having a volume control should a turntable be the only source they have in their system. 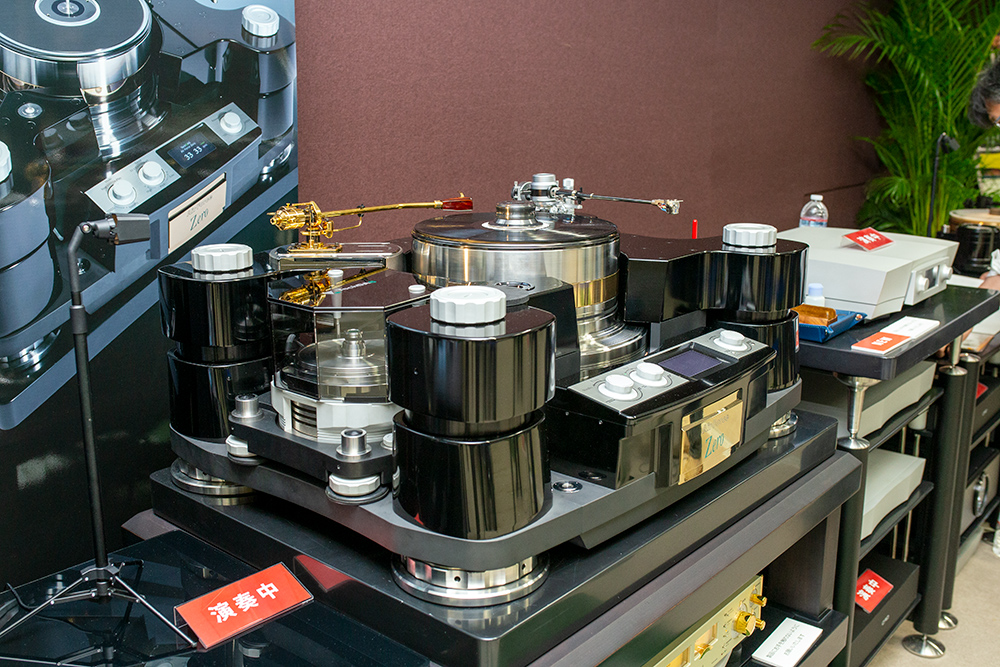 I’m closing off the turntable coverage with the most ambitious product of this category that I saw at TIAS 2019 -- the Air Force Zero turntable, from Japan’s TechDAS, priced at a whopping ¥50,000,000 with a tungsten platter or ¥45,000,000 with a titanium one, but with no tonearm or cartridge. It joins the company’s Air Force One Premium, Air Force Two Premium, Air Force III Premium, and Air Force V turntables in its ever-expanding product line. On hand to present this technical tour de force of a turntable was . . . 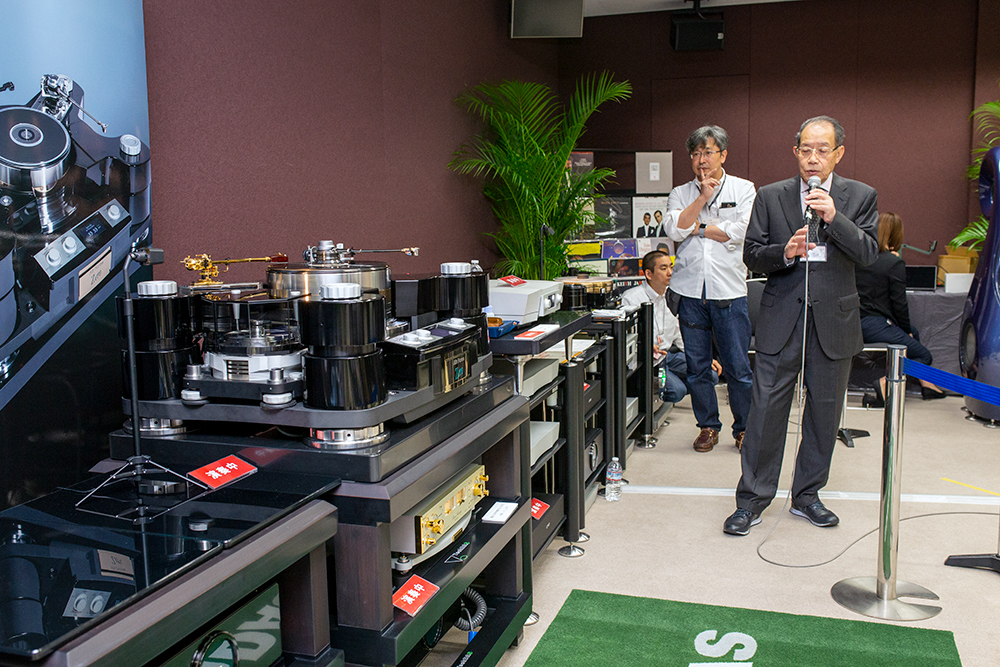 . . . designer Hideaki Nishikawa, who gave a presentation to a pretty packed house. I couldn’t understand Mr. Nishikawa’s presentation, as it was all in Japanese, so I resorted to the brand’s website for info. Not surprising for a product of this caliber, TechDAS claims that it “set no limitations in designing the Zero.” The company also had four main design criteria -- it wanted the “size of the entire system to be up to that of the classic EMT927 [turntable]” and the “weight of each component to be kept within the limit our suppliers could handle in processing.” It had to be able to be fitted with 10" and 12" tonearms, and have a platter at least 40cm in diameter. The end result is a system that weighs 330kg and costs more than the company ever expected it would. Besides the size and weight of the main turntable, there’s more to the Zero than that. Down low and off to the side were . . . 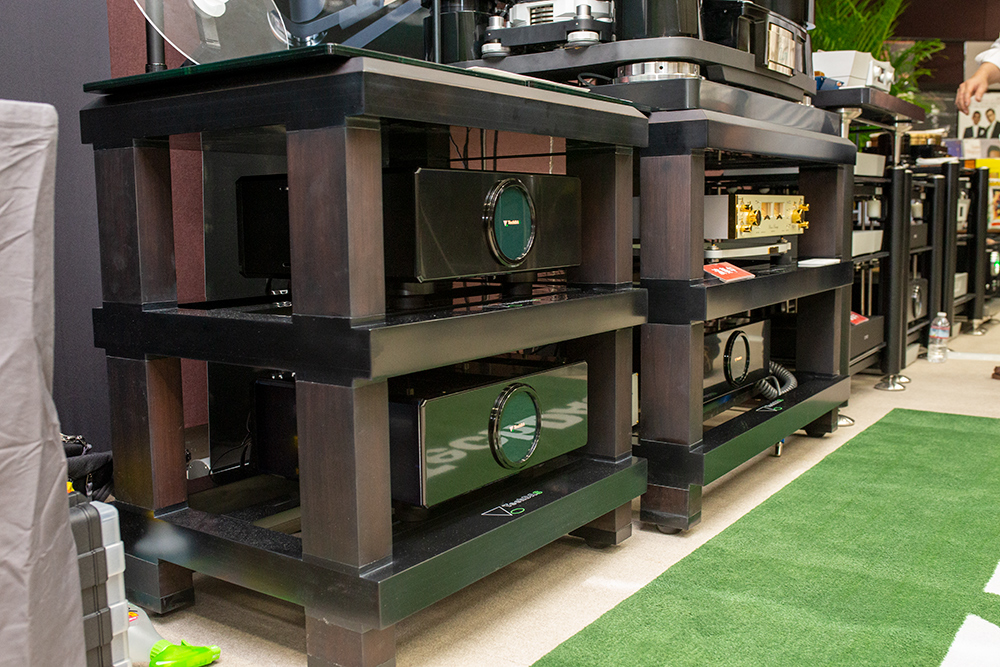 . . . three large cases, each containing a power supply and at least one air pump. One of the pumps floats the platter, the other the motor’s rotor and flywheel, and the other has a pump to suck the record down while another is for the suspension system. Wow, what an ambitious design!