An extreme pursuit of efficiency

Over the past decade, Magico, based in Berkeley, California, has made a big splash in high-performance audio. With their Ultimate (starting at $354,000 USD/pair) and M6 ($160,000/pair when available) loudspeakers, they pushed price points higher and broke new ground in their melding of high technology and industrial design. The floorstanding M5 ($89,000/pair when available) was the apotheosis of the combination of stacked birch ply and aluminum that first turned heads and ears in the Magico Mini ($20,000/pair when introduced in early 2004), a speaker that almost single-handedly launched the category of super-premium, stand-mounted loudspeaker. Magico speakers demanded to be seen and heard. Young companies need to be brash, but to survive for decades requires maturity. With the development of advanced custom drivers, the acquisition of its own CNC machine shop in San Jose, California, and the release of the Q series of speakers, Magico added maturity to the list of superlatives it's won.

Due to the combined efforts of company president Alon Wolf, chief technical officer Yair Tammam, and the rest of the Magico crew, 2010 saw the first Q model, the Q5 ($59,950/pair), raise the performance bar set by the M5 while cutting the latter's price by a third. Highly lauded, the Q5 has one downside: It requires loads of high-quality power, which exacts its own cost, and eliminates from the running all but the most robust tubed amplifiers. In 2011 Magico launched the scaled-down Q3, which is more efficient, costs $38,950/pair, and is one of the most successful products in the young company's history. 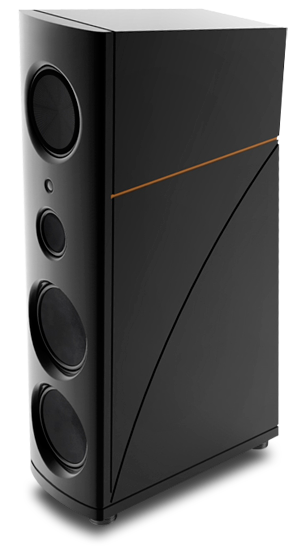 The SoundStage! Network's editor-in-chief, Jeff Fritz, fell in love with what the Q3 could do in his Music Vault listening room. Having lived for a month with the stand-mounted, two-way Q1 ($24,950/pair) in my smaller system (review in process), I now fully understand what the Magico buzz is all about. Almost daily, the Q1 has left me shaking my head, and my colleagues with their mouths agape: it's very nearly a full-range speaker crammed into a package measuring only 14"H x 8"W x 14"D. But while the Q3 and Q1 are certainly easier to integrate into a room and drive, no one would ever claim that the Qs are models of super high efficiency.

Not, that is, until the announcement of the launch of this article's subject, and the centerpiece of The World's Best Audio System 2012: the Magico Q7, whose very raison d'être is efficiency ($165,000/pair). From the inception of the Q series, it was always envisioned that a no-holds-barred speaker would emerge above the Q5 as the Magico design team's ultimate vision of a dynamic point-source loudspeaker. While any new flagship would, by definition, have to better the already robust performance of the Q5, what drove the entire design of the Q7 was that goal of efficiency -- specifically, an increase of no less than 10dB over the challenging 84dB of the 4-ohm Q5. The Q7 has an efficiency rating of 94dB at 4 ohms . . . in a sealed-box design!

The design of the Q7 evolved throughout the development and execution of the Q-series cabinet and the first three Q models, which in turn piggybacked on the knowledge gained from the design of the Magico models before them. In my conversations with the Magico team, it became obvious that they share a hacker mentality: they're a borderless team working in concentrated bursts of creativity followed by periods of deep thought, computational modeling, and collaboration with vendors and subcontractors to determine the feasibility and effectiveness of what they've come up with. The groundwork previously laid has taught the team how things work and what makes them better, thus informing how to manifest their new ideas in working prototypes.

Advanced Finite Elements Analysis, made possible by a suite of development tools (e.g., COMSOL Multiphysics, ReSHAPE, and others), was used to determine an optimal application of the Q cabinet's resonance management. Such dynamic, multi-environmental modeling resulted in a sealed enclosure of manageable size with well over twice the Q5's interior volume, with a subenclosure for the two bass drivers (which occupy well over half the cabinet's internal volume), as well a subenclosure each for the midbass driver, the midrange driver, and the two crossover networks (the Q7 is designed to be biwired). Each subenclosure consists of a complex matrix design on all three axes, raising its resonant frequency well above the audioband. The midbass subenclosure has no parallel walls, while the multifarious trapezoidal enclosure dedicated to the midrange "floats" within a larger cavity in the framework. The tweeter occupies a sealed enclosure within the front baffle. 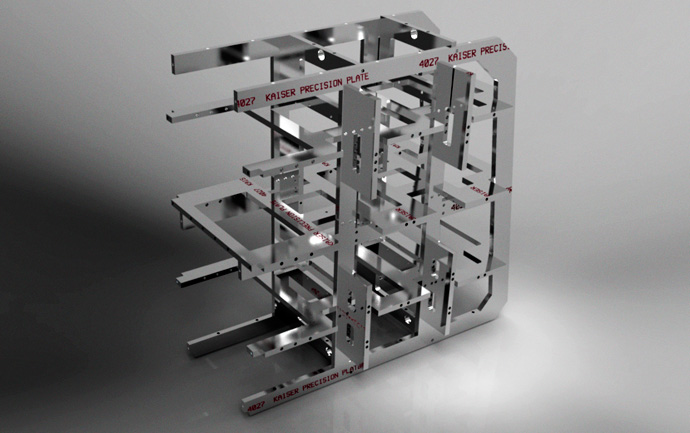 When I asked my three-year-old daughter what she thought about the picture of the Q7's internal framework, she immediately said, "It's a building." It does look like the superstructure of a skyscraper -- one built to withstand the most severe earthquake immediately underfoot. While skeptics have accused the Q cabinet of overkill, Magico's Alon Wolf assured me that every one of its 650 bolts is necessary. The number and location of these bolts are critical, not only to raise the cabinet's resonant frequency, but to narrow that frequency's quality factor (Q), which makes it much easier to capture and eliminate that resonance via proven damping agents.

The Q7's baffle, like that of its lesser brethren, consists of two plates. The tweeter is affixed to the outer plate, which for the remaining drivers has cutouts precisely radiused to eliminate diffraction effects. Those four larger drivers are connected to the much heavier internal plate. The resulting multi-element faceplate, sandwiching a proven damping agent in constrained-layer construction, has what Magico believes are the three characteristics needed to provide a perfect launching pad for the drivers: it's massive, stiff, and well damped.

While the resulting enclosure is hardly petite at 60"H x 15"W x 32"D and 750 pounds, its sculpted lines evoke visual elegance rather than the android- or refrigerator-like appearance of some competitors in this super-premium price region. Notable is how the five drivers are arrayed. The two 12" woofers anchor the bottom, above which is the 6" midrange, then the 1" tweeter, and finally the 10" midbass driver. Positioning the tweeter at ear level was critical to Magico, and it dictated the layout of the array. Wolf feels that to aim the drivers at a single hypothetical listener is unnatural. For similar reasons, he also avoids D'Appolito arrays. Above the lowest bass frequencies, all Magico speakers use a single driver for each segment of the audioband. As dense and inert as the Q7 is, it doesn't need carpet-piercing spikes; instead, it couples itself to the floor with four 3.25"-diameter pucks of stainless steel, whose height can be adjusted.

Driving toward the goal

While optimizing the enclosure was important in designing the Q7, the real story is in the drivers. Excepting only the driver membranes themselves -- beryllium in the case of the tweeter, Magico's Nano-Tec for the rest -- every element of all five drivers is completely new from the ground up. Developing and integrating a suite of drivers, each with a precise unit efficiency of 95dB (to avoid having to use the crossover to pad down any of the drivers), required coordinated design and control of all aspects of each driver, from its magnets, motor system, and voice-coil to its spider and frame. This is where the computational horsepower of Finite Elements Analysis and simulation was concentrated, to simultaneously correlate all of the drivers' acoustical, electromagnetic, mechanical, and thermal behaviors.

In addition to chasing efficiency, Yair Tammam and his team focused on attaining new levels of pistonic operation, thus minimizing music-related distortions in both the frequency and time domains throughout the selected bandpass. Wolf is proud of the extraordinary results: 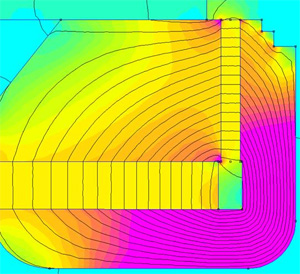 Developing the Q7 drivers involved a colossal effort to minimize eddy current in the iron parts of the underhung motor systems. These currents are created by the voice-coil movement and produce chaotic magnetic fields that work against the fixed magnetic field and thus create distortions. The best way to reduce these currents is to saturate the iron as much as possible. When the iron around the coil is totally saturated, no induced flux can develop (i.e., no eddy currents). In order to do that, a lot of design, precision machining of the parts, and huge magnets are required. In the picture below you can see the flux density of our 10" motor system. The color purple represents fully saturated iron; yellow is about 90% saturation. These are breakthroughs in performance that enable the voice-coils to move without any electromagnetic obstructions (the inductance of the woofer is measured at 0.085mH!).

The design of Magico's MB7 tweeter may start with a custom-made beryllium-diaphragm similar to that used in the Q5, Q3, and Q1, but for greater sensitivity it uses a custom neodymium magnet structure with a stronger magnetic field. Its fully saturated, underhung motor system has near zero inductance. Compared to its cousins, the MB7 achieves a super-high sensitivity of 95dB and increased power handling while maintaining wider dispersion and lower distortion. In fact, Magico claims that, in these regards, the MB7 exceeds the capabilities of any other tweeter now available.

The MG70 6" midrange, MG107 10" midbass, and MG1207 12" bass drivers are similar in their subcomponents: vented voice-coils of pure titanium with Nano-Tec cones; underhung, neodymium-based motor systems with extra-large primary magnet structures coupled to top-stabilizing magnets to achieve ultrastable magnetic fields; and composite-material spiders that can dissipate much more heat, for distortion-free reproduction of sound. The relative sizes of these elements vary, as do the sizes of the many custom-designed subassemblies specific to each. The measured results are staggering. Magico believes that the MG107 holds the world's record of inductance: 0.085mH at 10kHz, making it as close to ideal as is currently possible. Each driver offers the targeted efficiency of 95dB, pistonic movement through a significant range of excursion, and extreme dynamics: distortion-free output levels of 120dB at 1m in the bandpass for the MG70 and MG107, and at 50Hz for the MG1207. 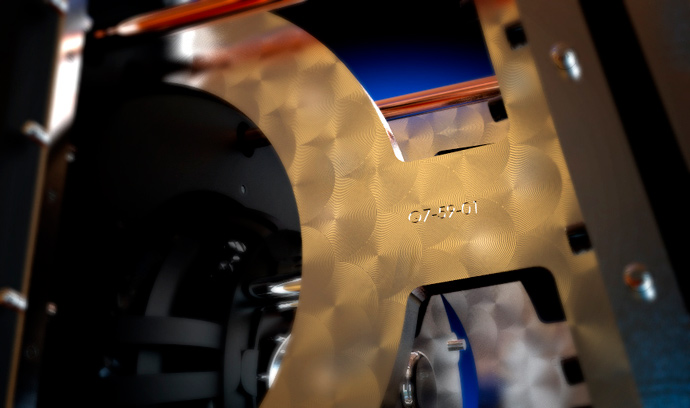 The Q7's crossovers are an evolution of the Elliptical design in the Q5, and use parts of the highest quality available. As mentioned above, the Q7 is designed to be biwired/biamped. If so ordered, it comes with two sets of Furutech FT-808 Torque Guard binding posts in all their carbon-fiber beauty. But buyers are cautioned to order Magico speakers configured for biwiring only if they will actually be used that way. Wolf and Tammam agree that the sound is superior when dual runs of speaker cable are used, whether biamped or not. To maximize the results for a single-wire setup, however, it's far better to give the designers maximum control (i.e., to build the crossovers around a single set of binding posts) than to use jumpers, even ones of high quality, to connect a superfluous pair of posts. As will be explained in the technical description of the Vitus Audio Masterpiece amplifiers, to which the Q7s will be tethered, in TWBAS 2012 the full potential of the biwired Q7s will be realized.

The effervescent and contagious excitement of Yair Tammam and Alon Wolf whetted our appetite as they told us about various elements of the Q7 while they finalized their design parameters and achieved their advances. Hearing the results for the first time at the 2012 Consumer Electronics Show has left us salivating for more. We can hardly wait until the weekend of March 30, 2012, to find out just how high the Magico team has raised the bar with the Q7.