Maryland-based GoldenEar Technology announced the release of the Triton Seven, a new addition to their Triton tower series, here at CES 2013. Building off of the success of their powered Triton Two and Triton Three loudspeakers, the latter of which I recently reviewed, the Triton Seven is a wholly passive affair. Priced at $1398 per pair, the 40"-tall design features the same High Velocity Folded Ribbon of the larger models in the line, along with a pair of 5.25" midrange-bass drivers. To maximize their bass response, each Seven houses an 8" passive radiator on each side of the floorstanding speaker's cabinet. Unlike the larger Triton Two and Three, which make use of a curved front baffle, the Seven has a flat front edge. But its overall design is still similar to its larger siblings, with a rearward rake that makes the Seven narrower at the front than it is at the rear. 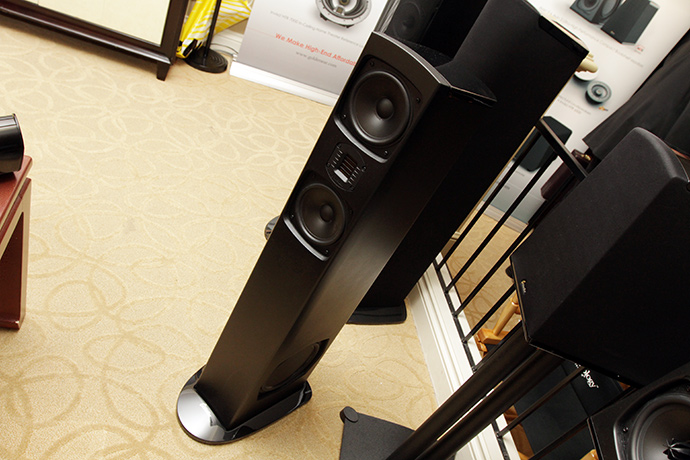 The sound was surprising, but perhaps it shouldn't have been. With 5.25" bass drivers, even when augmented by 8" passive radiators, one wouldn't expect a speaker to offer deep bass, but I fell into the trap of asking whether a subwoofer was playing. Impressive. While it's not exactly full range, I'd be surprised if there's a significant difference between the bass output of the larger, more expensive, and powered Triton Three and the Triton Seven on display in the Venetian here in Las Vegas. And the bass wasn't simply deep. It didn't have the plodding, lazy, exaggerated bass of more budget-oriented products -- it had real texture and tautness. Backing up the $1398 speakers were monoblock amplifiers from Pass Labs and assorted pieces from Audio Research. 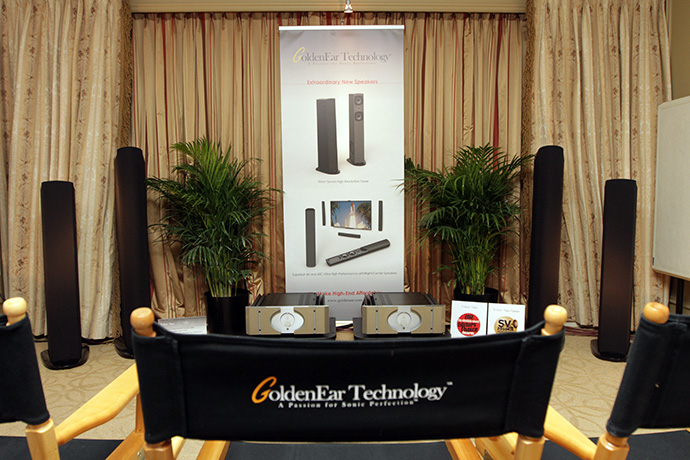 GoldenEar retains their signature sound in the Triton Seven, with the folded ribbon tweeter doing well to help cast a soundstage that was both broad and deep. Even seated in a complementary nearfield listening position, I felt as if I was listening to markedly larger and more expensive loudspeakers. The vocals of a John Rutter male choral piece resonated convincingly in what was assuredly a large recording space, while the breadth of the singers stretched nearly from one speaker to the other. And the Triton Sevens, like the Triton Threes that I'm so familiar with, possessed this smooth character that never obfuscated detail. You really get the best of both worlds. 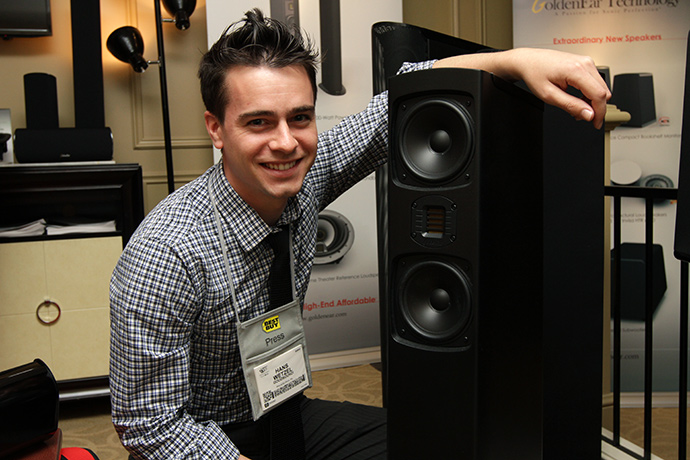 Then there's the imaging. Yes, well over $10,000 of hardware was running shotgun with these Canadian-designed speakers. But even so, you can't make garbage sound good. And the Sevens imaged very well. Despite being spread far apart from one another in GoldenEar's room, the Triton Seven towers were able to place voices and instruments in a given recording with precision, even when the volume rose appreciably. A chip off the old block, then, for GoldenEar Technology, and at a remarkably modest price.